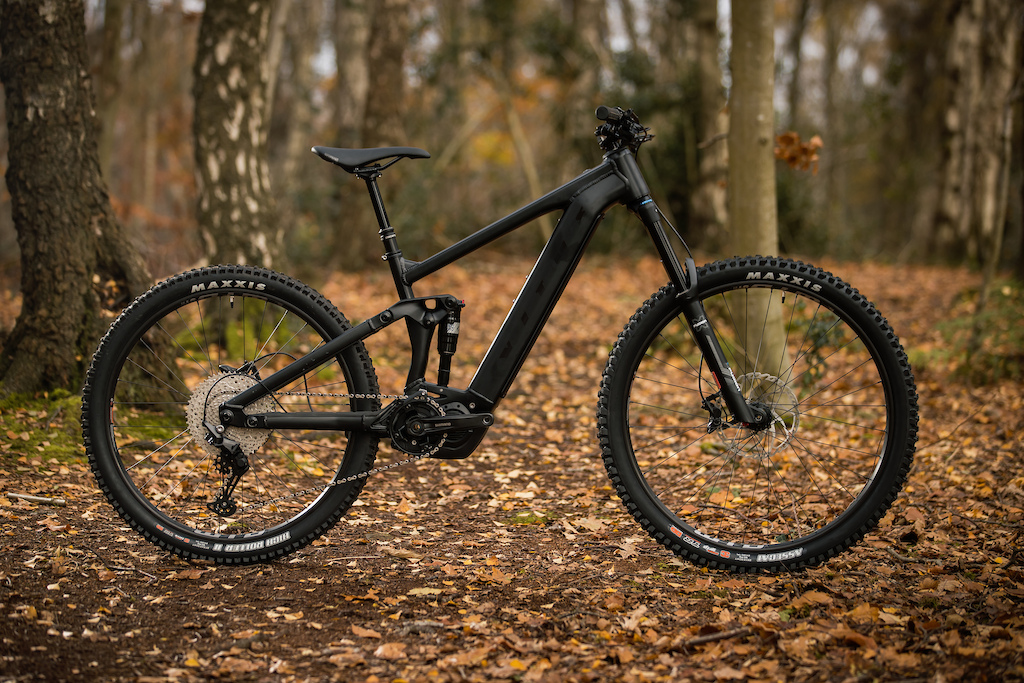 Vitus have announced the launch of their new and redeveloped E-Sommet eMTB today. The new E-Sommet features an internal battery frame design, updated geometry, and improved suspension kinematics. Vitus' goal with the redesign was to combine what they feel are the best components in the industry with their new frame to offer a capable eMTB while staying true to their customers with an accessible price point.

The E-Sommet features 167mm of travel and is designed as an all-mountain/enduro/freeride bike with a 27.5" rear wheel and 29" front wheel. The frame is made out of a 6061-T6 aluminum and sports either a Shimano EP8 or E7000 motor powered by an internal Shimano battery with 630wh or 504wh, depending on the model. The bike also has improved internal cable routing, a threaded BB shell, and SRAM's UDH derailleur hanger. 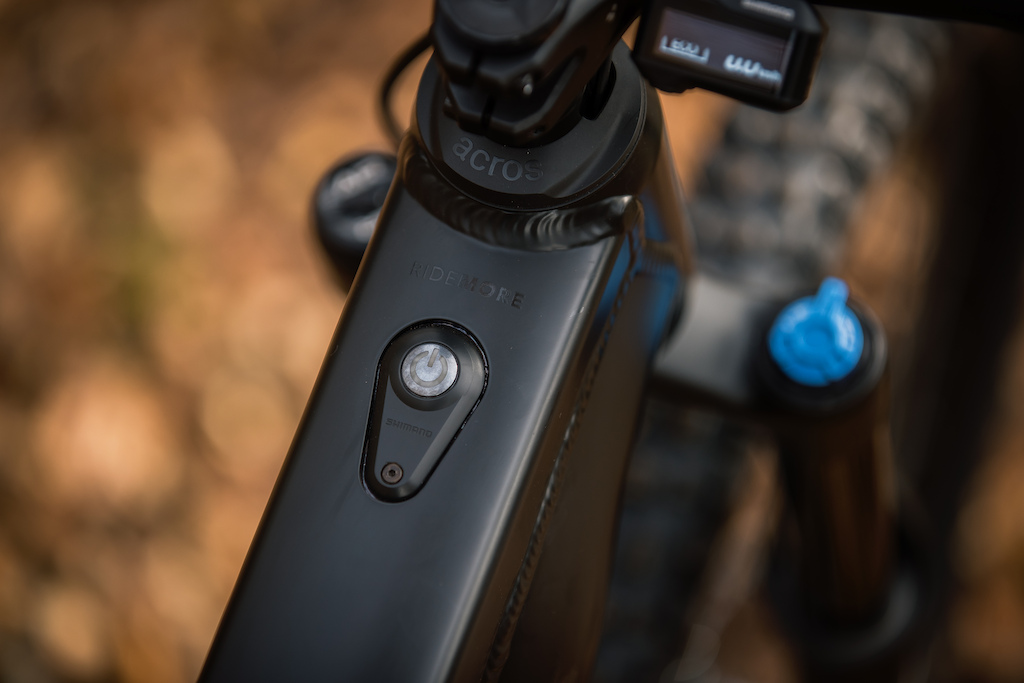 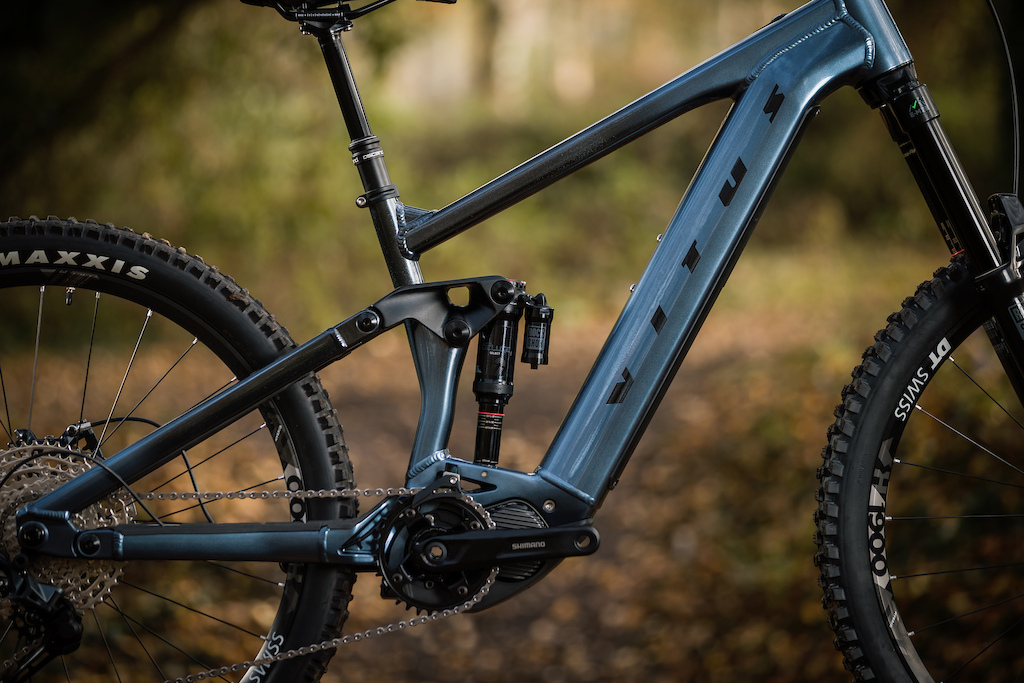 The battery is now an integrated design, incorporating all aspects of the system in the frame. Vitus' engineers designed a battery door on the bottom of the downtube and added strength in key areas to ensure the frame kept the performance characteristics they were after. A larger 630Wh battery coupled to the EP8 motor has a claimed 36% less pedaling resistance vs the E8000 to give riders more range.

The new EP8 motor has a magnesium housing that offers greater assistance on a wide range, it also weighs 10% less than the previous E8000 motor and has 20% more torque, at 85Nm, to allow riders to tackle more challenging climbs and trails. 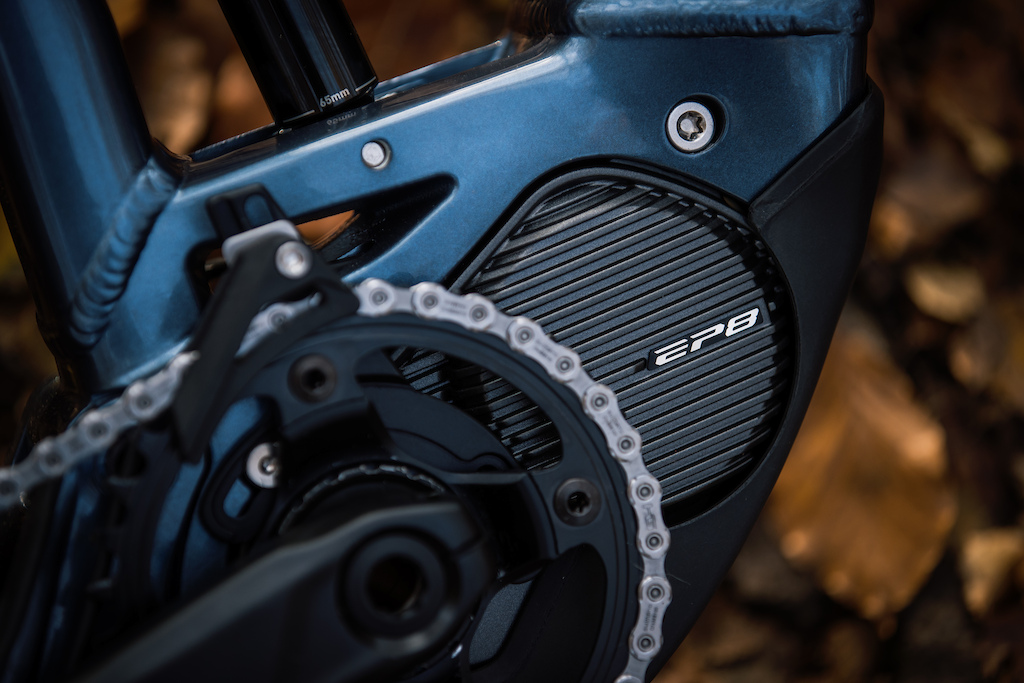 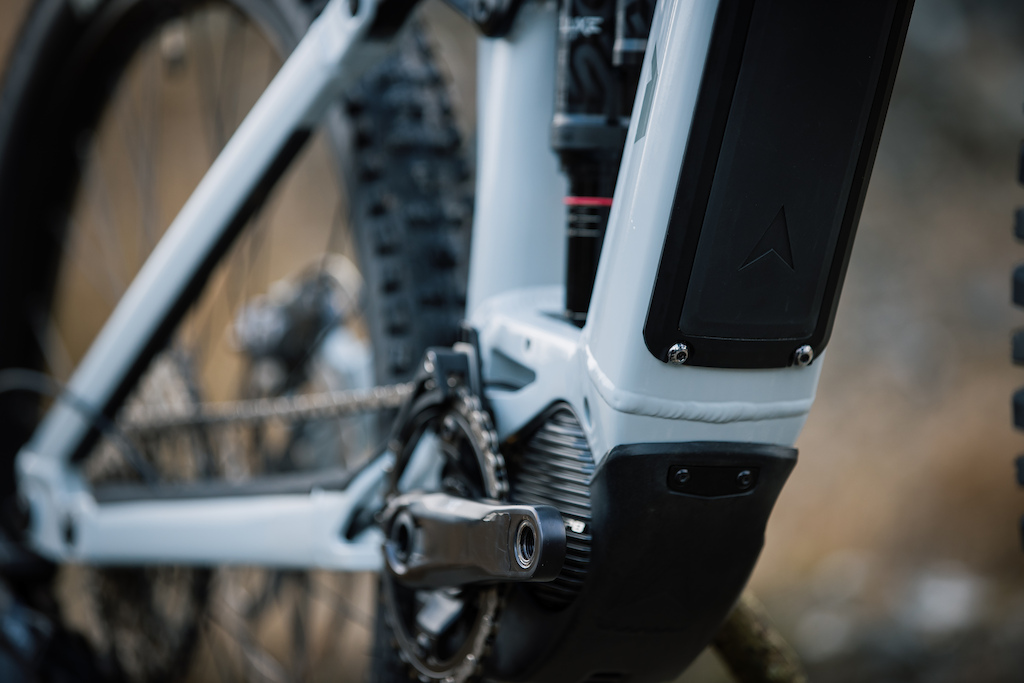 Vitus have updated the geometry of the E-Sommet to provide what they feel is a more confidence-inspiring ride. There are slacker head angles and a reduced BB drop to aid in technical climbing. There is a steeper effective seat tube angle which progressively steepens as you go through the size range of bikes to give each frame size an optimal sagged saddle position.

Through measuring saddle height at saddle lay back, Vitus looked at the position of the saddle relative to the BB to ensure that the bike was in an optimal pedaling position at sag. The seat tube was steepened in larger sizes to ensure the saddle layback wasn't too far behind the BB. 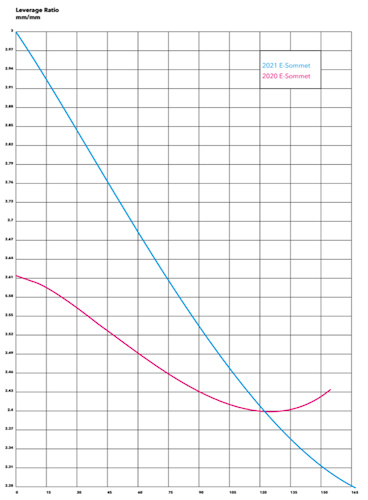 The new E-Sommet features a straighter leverage curve and an increase in progressivity from 8% to 25%. This was done to improve small-bump sensitivity and mid-stroke support. The increase in progression also helos with end stroke control and allows better compatibility with coil shocks. 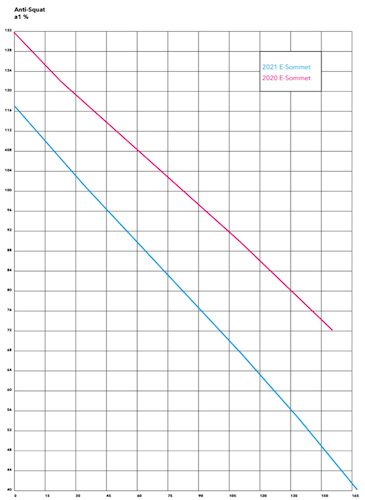 The anti-squat has been reduced to work alongside the new leverage curve with more mid-stroke support. 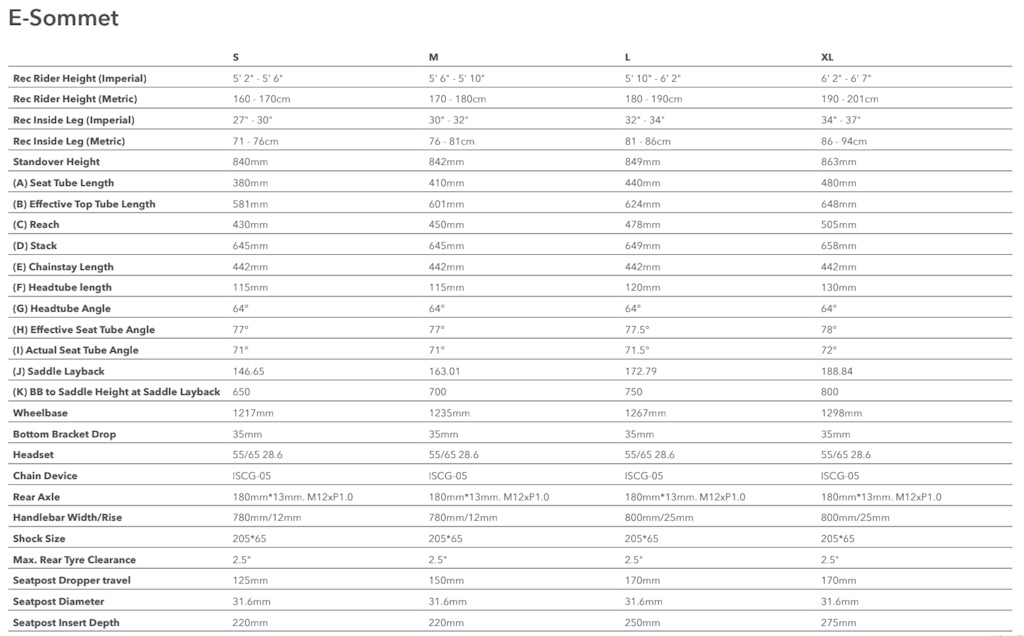 The top of the line E-Sommet VRX has a Shimano EP8 motor and 630Wh battery, Shimano XT level drivetrain and brakes, and a RockShox Zeb Ultimate fork paired to a Super Deluxe Select+RT shock and sells for £5,499.99 or €6,299.99.

At the moment, the E-Sommet isn't available in the US, but plans are in the works to change that by early 2021. 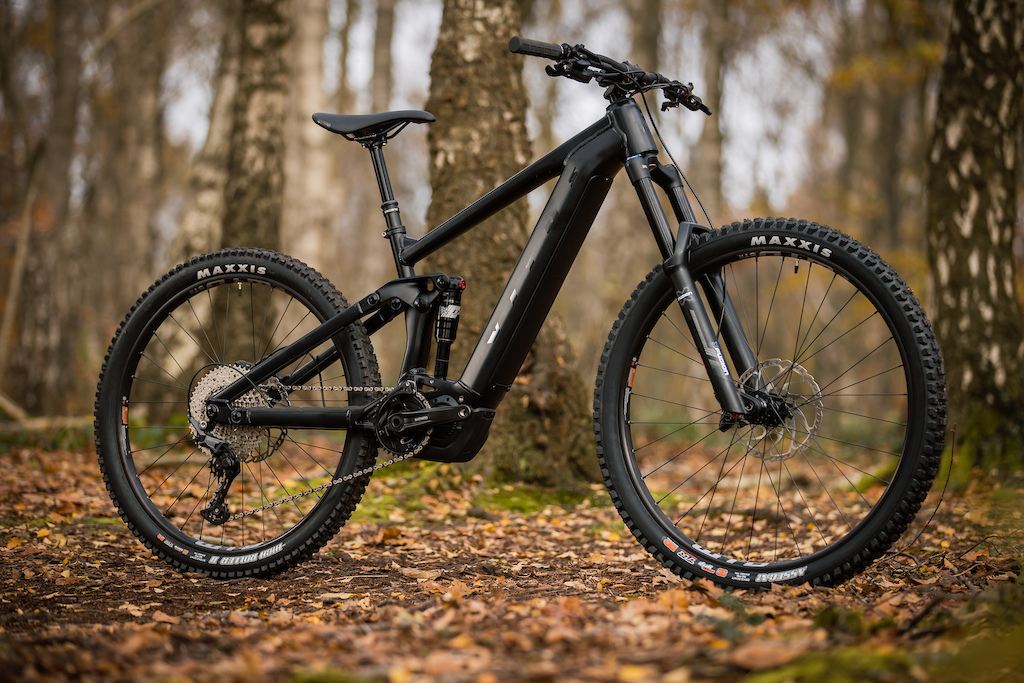 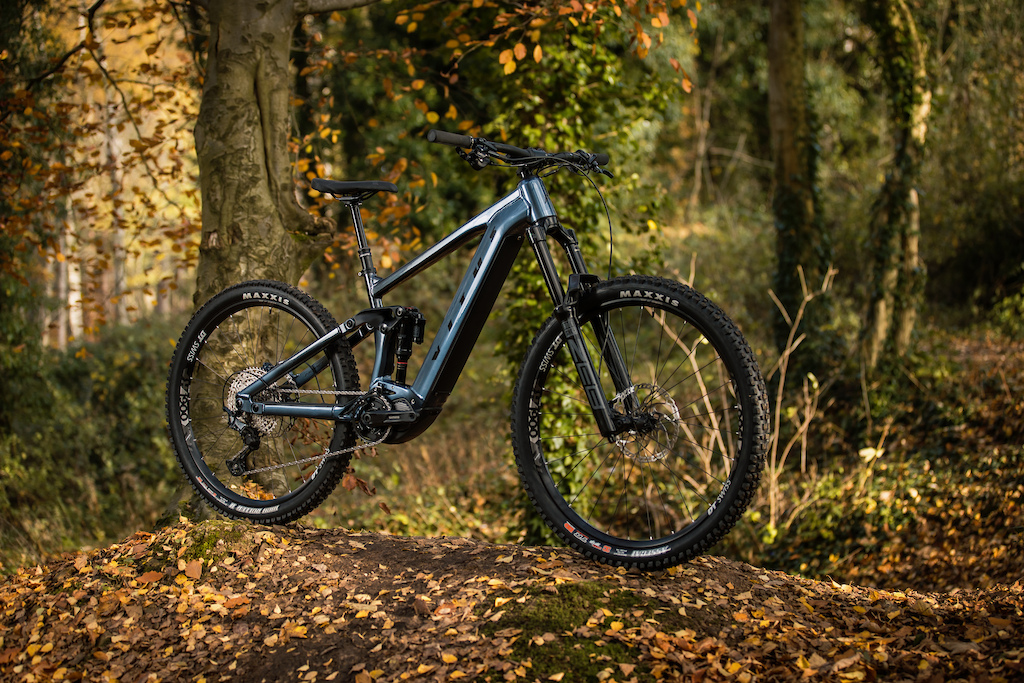 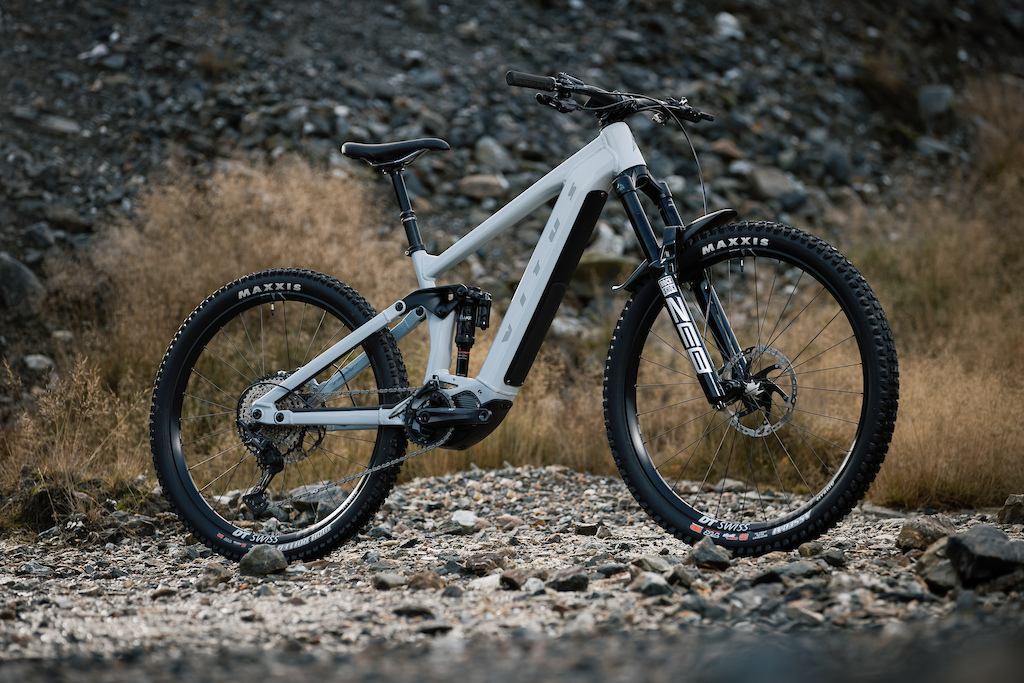 E-Sommet VRX
The E-Sommet VR is now available and the VRS and VRX models will be available in January 2021. For more information, visit www.vitusbikes.com 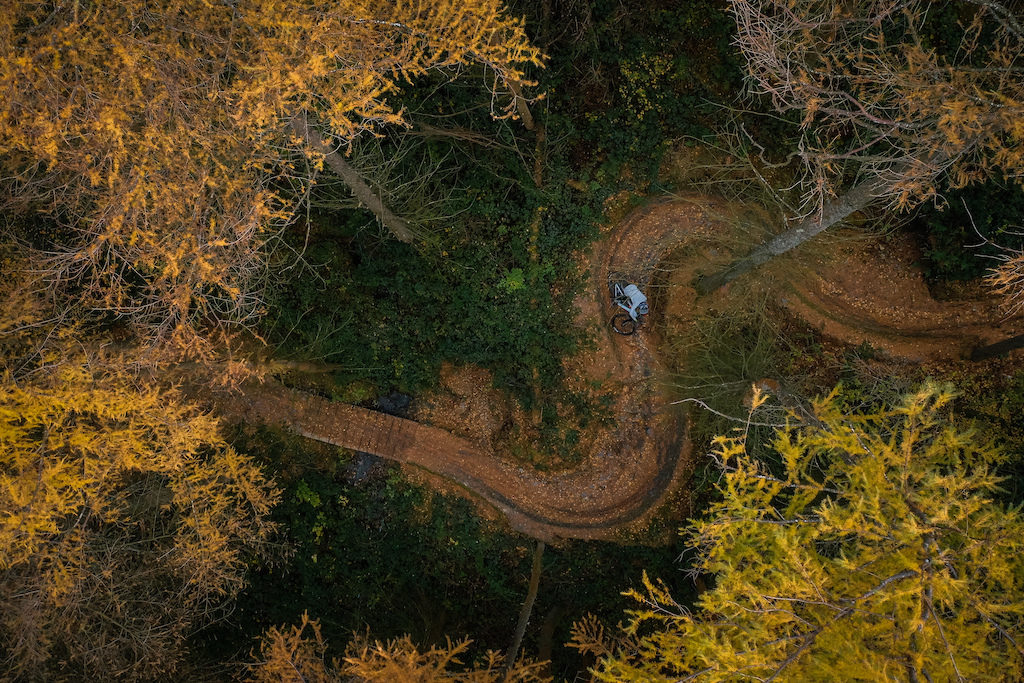 EmtbScotland (Nov 12, 2020 at 6:37)
Only came to see how many bawbag Ebike haters came to complain in the comments about a newly released Ebike article/advert they themselves chose to open.
Was not disappointed.

Chuckolicious (Nov 12, 2020 at 6:48)
Come on, man. You know that outrage is the currency of the day. And they all have to virtue signal to their perceived chosen tribe.

suspended-flesh (Nov 12, 2020 at 6:55)
@Chuckolicious: Don't let the buzzwords create a feedback loop in your echo chamber - it will melt your snowflake, bro.

digitalsoul (Nov 12, 2020 at 7:15) (Below Threshold)
I only came here to see how many ebike loving idiots were complaining about the ebike haters. Was not disappointed.

suspended-flesh (Nov 12, 2020 at 8:43)
@digitalsoul: We have become a slave species to polarity. Ebikers 4 Tump vs AnarchoCommunists 4 Human Power.

won-sean-animal-chin (Nov 12, 2020 at 16:29)
@suspended-flesh: its the haters refuting science and making up arguements without proof though

Heidesandnorth (Nov 13, 2020 at 4:46)
@pinkbike: how about an eBike-hater filter? Or even better: a filter that filters out everything I do not like, kinda FB-style. That world out there upsets me so much, please create a cozy, pink unicorn & rainbow-filled safe place for me!!!

Bedede (Nov 13, 2020 at 3:00)
These look great, but I was hoping for better spec, when Vitus announced the new analogue bikes, those are amazing value, £3.5k the escarpe or sommet have a spec that I would never feel a need to change. The ebikes are well priced compared to the competition but not amazing. Anyway academic, CRC is the only seller, the lower spec one, released yesterday now only 5 left in stock of the large.

galliwasp (Nov 12, 2020 at 7:50)
Those e-screens do seem particularly vulnerable to getting smashed when a bike tomahawks. I run my bike light upside down beneath the bar where it's protected; it works like a charm.

mr-epic-3 (Nov 12, 2020 at 19:43)
Nice work Vitus on the E-Sommet, looks great and Geo numbers look spot on. Can wait for some ride reviews. To be honest with all of the eMTBikes and eMTB relate stuff Pinkbike should create a new website just for eMTBs.

holdandhope (Nov 13, 2020 at 2:01)
Hopefully e-bike riders can create there own trails the no one will have to moan about all the lazy crap riders riding them like Allen.

Richt2000 (Nov 12, 2020 at 11:51)
@rockroll:
Thing is the non E new vitus summet and eacarpe are exceptional value. With wiggle platinum discount its cheaper than a YT, canyon or anything else build for build.

My guess is Shimano are charging a fortune for their new duff motors....

So sick of this “hide the weight” approach by the MTB world. Just give us the weight of all MTB’s in the details list. The people will decide if it’s worth further investigation.

norona (Nov 12, 2020 at 8:05)
The problem is the motors and battery weigh roughly the same, so it comes down to parts list really, and that varies greatly on what you choose. On a regular bike you are in a constant battle between weight and function, sure you want the bigger tires and suspension but do you want to pedal it up. I have over 26,000km now on the devinci it is 56 pounds ready to ride with cush core's and it feels like a 25 pound bike now, it has 180mm travel and everything you do want fo sick downs and it climbs like my old race bikes. The weight matters most who have not spent time on them. It is why so many guys love the idea with the lighter sl etc, but they are spec'd with super light tires rims etc that just wont stand up to the ripping you will do and once you ride against someone with equal fitness , the more torque and powerful motor does more and can do steeper ups for longer...some of the top ews bikes are 37 pounds so the disparity is not as much as most riders believe.

mikekazimer Mod Plus (Nov 12, 2020 at 9:09)
@shredb4dead, we always try put the weight of a bike in the details list if we actually have one one hand to weigh. There's no hide the weight conspiracy - if you look back at most of our First Looks / First Rides you'll find it clearly listed.

In this case, that wasn't possible, but the claimed weights are in there now. @IllestT was right on the money.

johnbalz (Nov 12, 2020 at 9:21)
Because it doesn't matter. I'm 40 and have ridden most of my life, always cared about weight but could care less on my ebikes. I like them on the heavier side as you can just smash descents faster.

betsie (Nov 12, 2020 at 5:13)
Great advertisement for the bike, engages boost, rides 3 pedal strokes then no more pedalling down the hill!
That was a great use of boost...

Cant wait for there to be sub 40lb e-bikes with small batteries that are detachable and ideally a motor that can be removed too.

? How many e-bike companies have a connector for night lights (bar mounted of course) and night lights that connect to that connector. This would be great for the winter riding. Add in some hand heater options too to get the best use out of that battery. How about putting some descending regen energy back into recharging a small battery if selected...

I will stick to R&D in a bigger company... I mean, paperwork and tiny changes, cost improvements...

Once upon a time I worked for a small engineering company, world firsts (some good motor drive stuff too), small amount of paperwork, lots of real design work

raozaki (Nov 12, 2020 at 10:40)
check out the bikes with fazua motor, for example lapierre ezesty. the drivepack which contains the motor and battery connects to some sort of transmission in the bb shell and is removable which should turn the bike in a regular pedal bike, albeit a bit heavier.

IllestT (Nov 12, 2020 at 11:15)
Not sure about other brands, but Shimano and Bosch have sockets available for plugging lights into (and have done for years).
Information on such aftermarket plugins is extremely thin on the ground though.
Its not straightforward either. Bosch requires the motor cover to be removed and connecting by wire to a computer with Bosch USB key in order to activate the power to the sockets.
Shimano is a bit easier, you can plug lights into the spare socket behind the head unit (by removing the blanking peg) and activating the power using the eTube phone app (which is awful by the way!)

steviestokes (Nov 13, 2020 at 0:00)
I thought exactly the same and came hunting for comments. It's like a proud statement.... All well and good if it were true and yet, not actually physically possible.

boozed (Nov 12, 2020 at 14:29)
If these become available before the acoustic Sommet that was launched three weeks ago...

holdandhope (Nov 12, 2020 at 4:12)
Really don't get why your filming a video on an e-bike at revolution when your not even allowed to ride them up there...

mcozzy (Nov 12, 2020 at 5:18)
Geometry and price look good, a decent alternative to the kenevo. Vitus are killing it in 2021 with their ebikes and snailbikes.

galliwasp (Nov 12, 2020 at 7:53)
That screen looks vulnerable to being smashed after a bike tomahawk.

IOMHENDO (Nov 13, 2020 at 4:04)
Revolution Bike Park Perfect conditions to ride in featured in that video!

Noeserd (Nov 12, 2020 at 4:14)
I've used metric not so long ago, it was one of the plushest fork i ever used. İf you are a heavy guy one sizr negative spring causes some problems tho

msusic (Nov 12, 2020 at 7:15)
Why are ebikes so expensive? Probably due to high demand but still, compare that to electric scooters. You can get pretty good electric scooters for 400-500 euros, but bottom of the barrel hardtail mtb with alivio/acera and low end suntour forks sells for 2000 euros! Non electric bike like that goes for under 500 euro and electrified version is for some reason 4x the price! Electric scooters are also high in demand, feature similar batteries, range and motors of equal or greeter power.

Karpiel073 (Nov 12, 2020 at 8:36)
You're comparing apples to oranges. Manufacturers are taking something already expensive (the MTB) and adding more tech. That tech is constantly evolving too.

IllestT (Nov 12, 2020 at 11:22)
One of the biggest reasons eMTBs are expensive is to do with the regulations and how they require eBikes to function in order to be legal.
Because eBikes must be essentially 3 things in order to be legal (pedal assist only; 250 Watts nominal; and max assisted speed of 25kph) - all that requires a lot of complicated, sensitive and accurate sensors and multiple brains to monitor and log it

Chuckolicious (Nov 12, 2020 at 6:47)
Huh? You can find plenty. Myself, the times I've tried them I've thrown them down the same sick shit I ride on my regular rigs. Try Rob Rides and EMBN. Haven't seen any complaints of motor hits, not that they don't happen ever. But then it's MTB, shit can break.

norona (Nov 12, 2020 at 8:08)
you are the guy who said, hydraulic hoses would always break when hydralic disc brakes were introduced, right?