Now THAT Was a Bike - Wade's Retro Maiden - Crankworx Whistler 2016


Has it really been twenty years? 2016 marks two decades of Wade Simmons riding for Rocky Mountain, which has to be some sort of record when it comes to athletes staying put. To celebrate this milestone, Rocky planned a special project that was supposed to be a surprise for Wade: a custom painted Maiden done up in the same motif as the iconic RM7 Wade Simmons Edition from 2003. Memory not what it used to be? Wade took delivery of his green flamed RM7 shortly after he rode off the Moreno Valley road gap in California over a Marzocchi monster truck on an earlier RM7, stomping what was at the time the largest move ever done. More than ten years later, it'd still be worthy of a movie's highlight reel.

In a lot of people's eyes, that was the golden age of freeride, so there's probably no better bike to use as inspiration for Wade's twentieth-anniversary present. 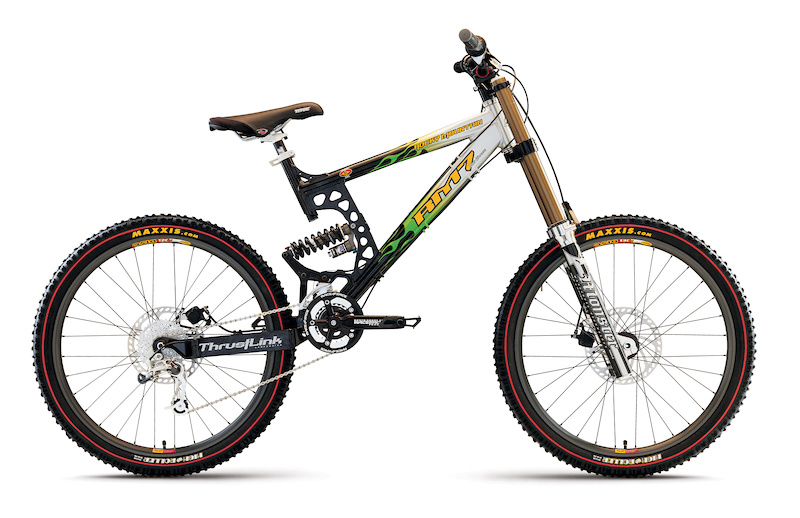 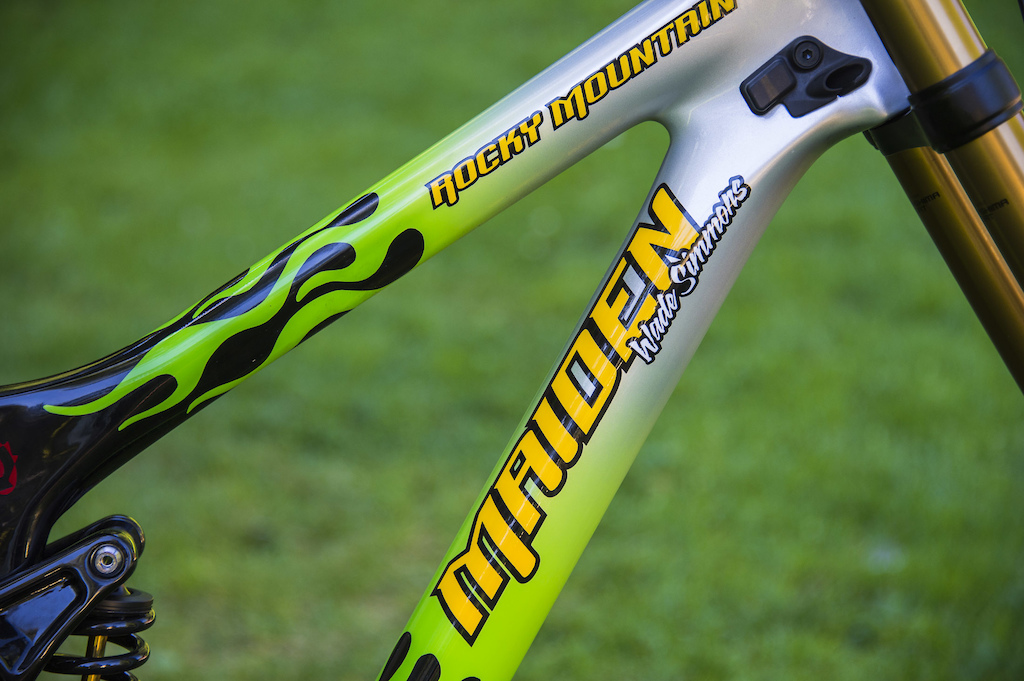 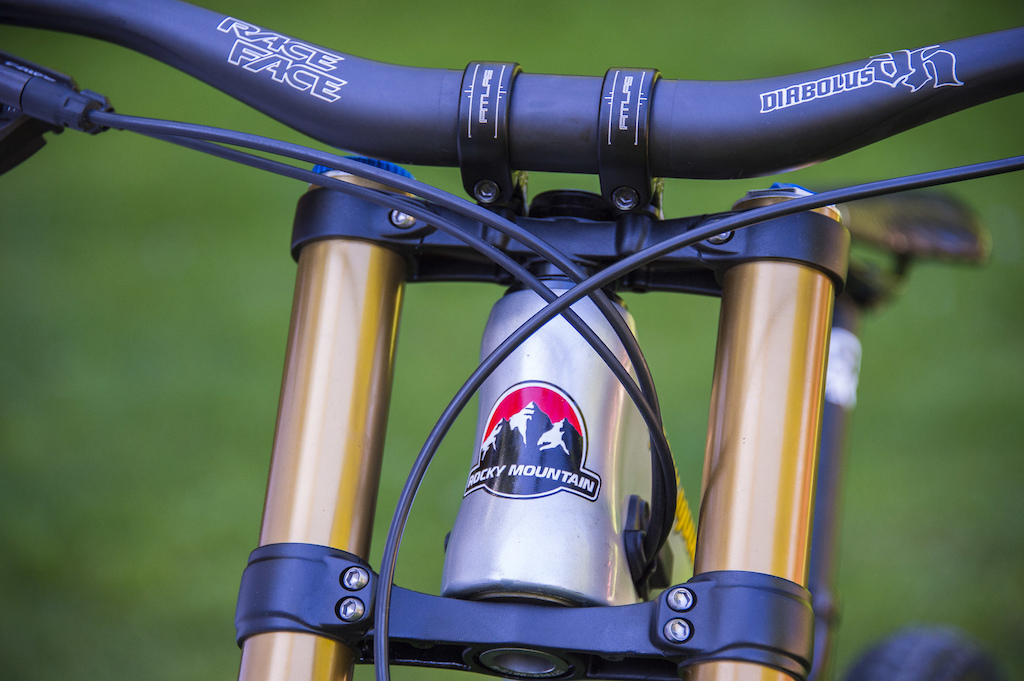 Originally, the custom Maiden, known by those at Rocky as the ''Waiden,'' was supposed to be a surprise for Simmons, but the frame was apparently in Rocky's office when he dropped by unexpectedly. Surprise spoiled, but I doubt that mattered to Wade once he saw those green flames.

The frame itself was actually a stock, unpainted unit that Rocky was delivered to renowned Vancouver-based custom paint shop, PaintHouse Customs. Once there, Stacy Glaser based the Maiden's logos on the actual decals that were used on that 2003 RM7, only instead of decals, he painted them onto Wade's new bike by hand. 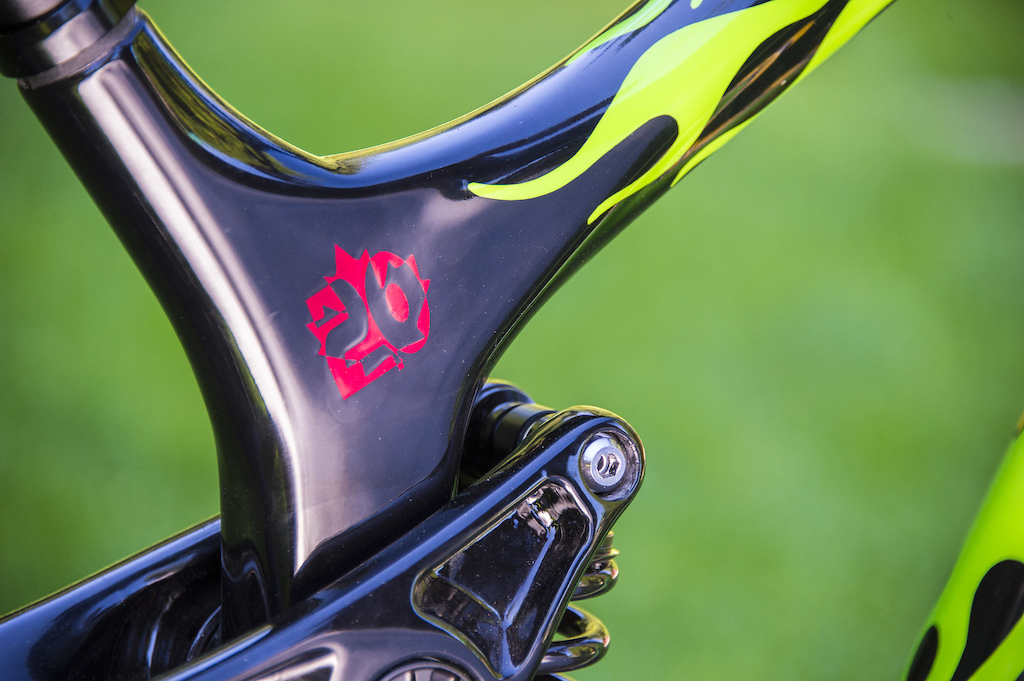 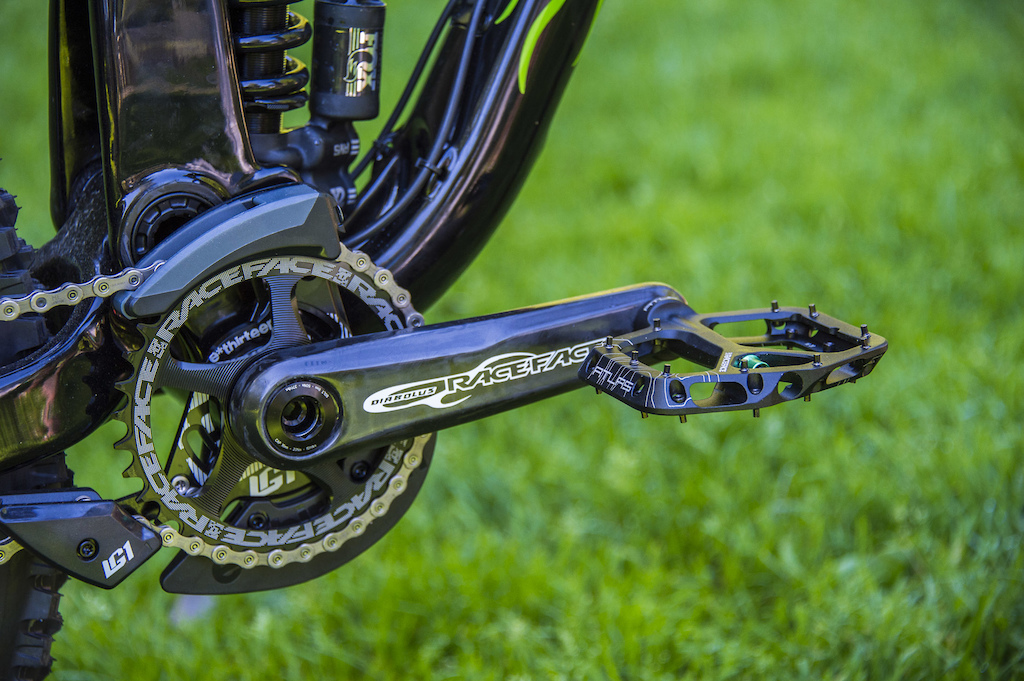 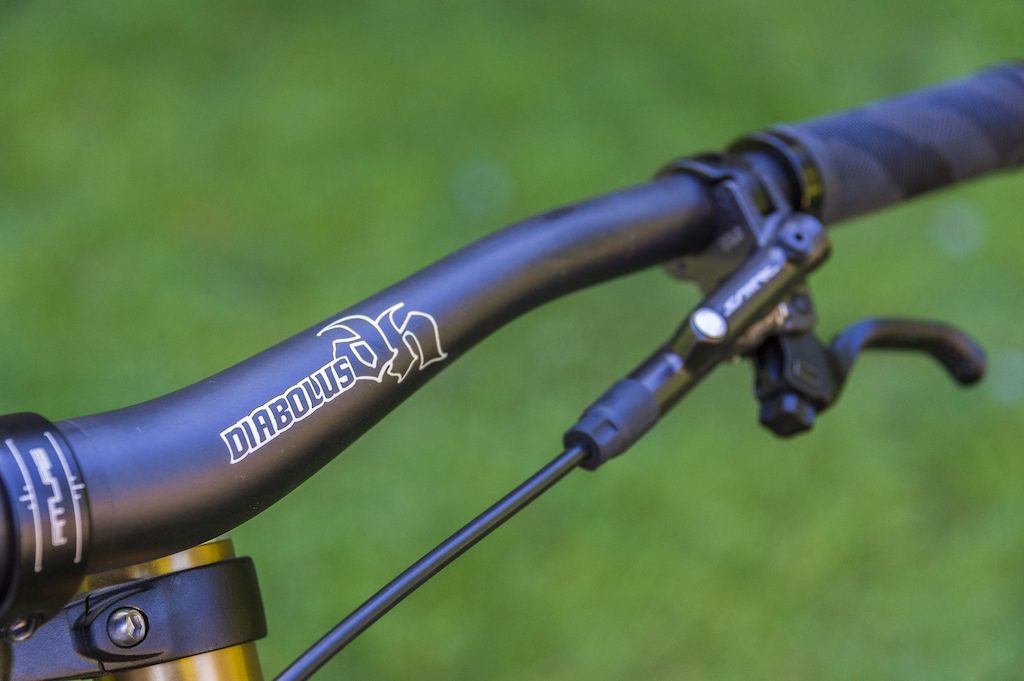 Glaser got his hands on the frame around the end of April, and the whole bike was finished just prior to Crankworx after some custom chrome decals were added to the Fox suspension. Longtime sponsor Race Face also joined the party with custom graphics on the carbon cranks and handlebar that will have more than one fan wondering if the bike is rocking Diabolous components. It's not; they're actually carbon fiber SixC arms and a SixC handlebar.

China or platinum are supposed to be the go-to twentieth-anniversary gifts, but neither have anything on the Waiden.

lilrocket (Aug 17, 2016 at 13:14)
Wow!! It's like my dream bike from back in the day! Now that Fox own Marzocchi, I wonder would it still be considered too cheeky to put some Monster T decals on the forks to really complete the look...

Mattin (Aug 18, 2016 at 12:03)
@Boardlife69: those bikes were designed for something totally different. They were designed to huck off cliffs and north shores as high as possible. Thereby the HA needs to be steeper because the impact comes from underneath. Where as downhill bikes are ment to absorb roots and rocks at high speeds, so the fork needs to be in a more slack angle. Same for the longer top tube lengths and no need for low bb's when you don't corner at high speeds.

loomis-school (Aug 24, 2016 at 5:34)
@Mattin: you ruined this article for me. Yes, I am trolling or something. No one cares about the logistics of the frame mishaps. This bike has a cool storyline not a summary of it "needing" new geometry etc. Go comment on some otter bike that fits your know how.

Mattin (Aug 17, 2016 at 14:51)
Re watched the NWD series so many times. Especially the older half. I grew up having NWD as my inspiration and those guys are still kind of heroes to me. And it never gets old to watch, even though I must have watched NWD 4 for example nearly a 100 times by now.

makripper (Aug 17, 2016 at 14:51)
man it's been 13 years already? WTF!! I still remember seeing it on the big screen for the first time n being blown away! Capital theatre in Nelson what what!

axleworthington (Aug 17, 2016 at 17:29)
I remember being amazed by this still photo in the magazines:
cdn.coresites.factorymedia.com/dirt_new/wp-content/uploads/2014/08/wade-simmons-moreno-valley-gap-2002.jpg

RockyMountainBicycles (Aug 17, 2016 at 14:58)
Wade you legend, it's been an incredible 20 years. Thanks for inspiring countless people to push the boundaries of our sport.

mtnbykr05 (Aug 17, 2016 at 20:30)
Seeing as Fox now owns the rights to Marzocchi, I wouldn't think it would be that difficult to have them chrome them and slap a Monster decal on it. Even the stantion coating seems to fit.

crownperformance (Aug 17, 2016 at 15:13)
New school riders will never appreciate that generation of Rm 6/7/9. Iconic freeride bikes of my time and helped me solidify my passion for bikes.

cthorpe (Aug 17, 2016 at 15:33)
I remember drooling over the RM7s and RM9s in the magazines when they came out. Back when pink bike consisted of a few hundred grainy user photos. Oh how the time flies. That paint job really does the Maiden justice. Beautiful!

downhilldj127 (Aug 17, 2016 at 17:39)
That RM7 gapping the Marzocchi truck is the sole reason I ever threw my leg over a top tube and tried to ride a bike. 12 years later I'm still riding and just as passionate as ever. There is some serious nostalgia for me with this post!

choppertank3e (Aug 17, 2016 at 16:23)
I remember an RM7 was the first really real bike I ever rode. It was So burly. Always picked it playing DH Domination. Can't believe enduro bikes have that much travel nowadays. I wonder if this maiden could withstand that huck as well.

mudmandhbrazil (Aug 18, 2016 at 9:30)
I was looking for a DH bike in Europe and there was this top of the line Maiden for more than 12 thousand Euro... what a bike. Wanted to buy a cheaper Maiden that was about 6 thousand and there was no size available. I love this bike looks amazing and should work great. I remeber well this RM7 was dream bike at that time.

CircusMaximus (Aug 17, 2016 at 15:44)
@endlessblockades: yep they were... Interesting. if you landed heavy the forks would twist. If you tightened them any more to prevent twisting, they would bind like crazy. Also the seals never stopped leaking.
Also had a stratos rear shock that lasted 20 minutes. One bunny hop resulted in the shock body breaking in two pieces. Garbage.????

LittleDominic (Aug 17, 2016 at 17:28)
@CircusMaximus: They looked so bad ass though for back then. The gold anodized downhill fork on my first Gen Super 8, and the FR5 on the front of my Scwhinn 4 banger homegrown.

wydopen (Aug 19, 2016 at 5:36)
@CircusMaximus: the s8's were good aside from the fact you have to make your own fork guards out of pvc and hose clamps

shicksmack (Aug 17, 2016 at 16:43)
I love my mint condition 03 Wade Simmons RM7, but I'd REALLY love this in my collection. Sadly would never be able to afford this anniversary edition Maiden..

irideyourtrail (Aug 17, 2016 at 20:28)
That's what I was wondering, it's almost too nice to ride with the custom paint and components. On the other hand I looks fully decked out and ready for some trench warfare with the Godfather.

blowmyfuse (Aug 17, 2016 at 19:43)
My buddy Jeremy would gige.uncontrollably when riding behind me. When I was on off camber stuff, he said he could watch the rear wheel.wiggle.like a fish.

chaserider (Aug 18, 2016 at 0:05)
Extremely cool!
Wade has been the source of so much inspiration during the years when I rode the most. The old RM7 was a dream bike and the "Waiden" looks the part.

cardonethebear (Aug 18, 2016 at 12:56)
youtu.be/jWCkknZiKCo had to watch this after seeing this article