The mountain biking industry looks strong and healthy right now in 2021. The well-publicized bike boom has boosted sales and revenues across the board and it looks like the trend may continue for a few more years.

But as endless positive outlooks grace the industry's pages, what's missing from the conversation is the state of the sport from the point of the professional athletes. Competition has been a part of the sport since its inception. Without a healthy competitive scene, it's certain that bikes would be worse and the sport would be a lot less interesting. These are the people on the bleeding edge of our sport, who push their bodies and bikes to the limits to earn their living.

So to gather a snapshot of the athletes' thoughts on the sport they compete in, we've surveyed the top riders in the sport en masse. Is it progressing in a way that they are comfortable with? Do they feel safe? Are they paid fairly for what they do? And are there any issues that are being overlooked?

We quizzed nearly 200 professional riders to create the Pinkbike State of the Sport Survey, to our knowledge the largest public snapshot ever taken of professional mountain biking in the history of the sport. Over the next few days, we'll be releasing the data from the surveys to help us all understand the current state of mountain bike racing. 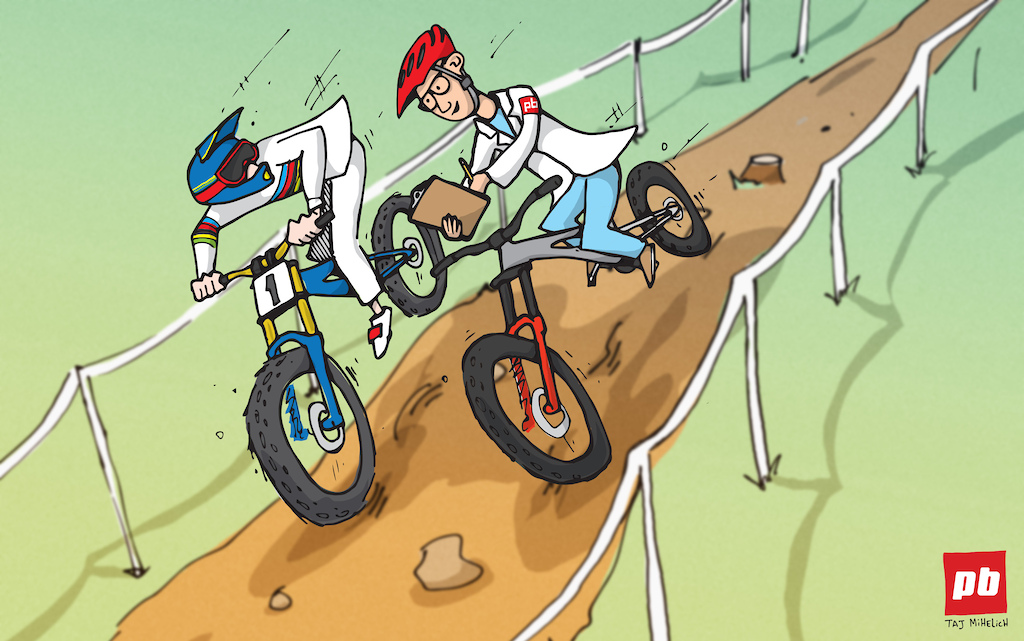 Who was surveyed?
We offered any rider that had finished in the top 40 of their discipline in the past two seasons the opportunity to take part in the survey. Some of those riders declined to be included and some were unable to respond in time but we have a broad range of riders from juniors to over 40s, from race winners to up and coming talents from every discipline.

Now, before you get excited about knowing Greg Minnaar's opinion on skinsuits or how much Isabeau Courdurier is paid, this survey was taken anonymously. This also allowed riders to be as open and honest as possible in their responses, and gave us broader insights into the trends that affect the overall health of the sport.

Of the 197 riders who responded to the survey, 61% were male and 39% were female. The majority of riders were from Europe (62.4%) but there were also 45 North American riders, 23 from Oceania, 3 from Asia, 2 from South America and 1 from Africa. Most respondents either rode downhill or enduro as their primary cycling discipline, but there were 39 cross country racers and 21 slopestyle riders as well.


Why did we do the survey?

We’ve drawn this up primarily because we love competition and we believe that having more information can only make the sport better for racers and the fans who enjoy it too. Without a broad, elevated view on the sport, we're unlikely to truly understand the issues that may be at play. Surveys such as this aren’t uncommon in other sports, and we hope that this one adds to the conversations to make the sport more transparent, equitable, and enjoyable for everyone.

The survey contained 7 sections all of which contained a variety of different questions. The areas we focussed on were:

There are some clear limitations to this survey. First, by limiting it to top-40 riders there's a selection bias towards the highest-ranking riders. While these riders will generally have the biggest impact on the racing scene, it does ignore the swathes of racers that sit just below them in the rankings.

Second, it wasn't a mandatory survey, so it may skew towards respondents dissatisfied with the status quo.

Third, we are relying on riders being honest in the survey. The survey was taken anonymously and we have no way of knowing if the riders answered the questions with full honesty. That said, we have taken their responses in good faith.

Over the next few days we'll be releasing the results of the survey with deep dives into the most interesting results, followed by a data dump at the end of the week that will allow you to dig into the numbers for yourself.

Posted In:
Racing and Events Industry News Pinkbike State Of The Sport Survey

Lokirides (May 4, 2021 at 4:04)
You don't need to survey pros, just ask look at the PB comments section where all the REAL experts reside!

ghaas (May 4, 2021 at 4:55)
Definitely something to consider when the dataset is made public. With the combination of country of origin, age and discipline, the data of some athletes will no longer be anonymous.

timeOday (May 4, 2021 at 17:08)
@ghaas: Oh boy wait until the internet mob finds out that why guy from SA or whatever thinks mullet bikes are dumb, there will be hell to pay

AndrewFleming (May 4, 2021 at 6:20)
Mountain biking, and other "outdoorsy" sports, are different than the mainstream - baseball, football/futbal, etc. - in that many mountain bikers pay little attention to the pros or races. On the other hand, there are plenty of people that watch ball games on TV religiously and can name a long list of pros in their favorite sport but they haven't played that sport in a long time or ever themselves.

Unrelated, funny how downhill was the biggest represented discipline. Plenty of time to complete the survey on the shuttle ride or lift back up!

Robinhoods (May 4, 2021 at 8:59)
stop with the pie charts, pie charts are not the most effective means of communicating data. The pie chart’s primary limitation is that people are much better at comparing lengths and heights, as you would see in a bar chart, than they are at comparing areas within a pie

Inertiaman (May 4, 2021 at 11:23)
Agree wrt the pie charts. Data visualization has progressed dramatically in the past 10+ years. Using pie charts is sort of like riding a 1992 mountain bike. Lets get some "modern geo" data visualization, please.

JSTootell (May 4, 2021 at 14:44)
I would prefer cake charts myself. But I'll settle for pizza charts. I can't do line charts, cocaine would show on a drug test.

Cord1 (May 4, 2021 at 6:26)
Minnaar is quite defintely not the only professional top 40 ranking rider from Africa. You all might think he did the survey, but you don't know it. PinkBike genii strike again.

Really anonymous then.
Like all these management surveys, dont tell us your name, but we can work it from the information provided!

Cant wait to see the results though.

henryquinney (May 4, 2021 at 7:13)
Don't forget that there are junior overall results, too. It's also worth noting the sample size as a proportion to the discipline's field size. But yes, I hope you enjoy the full release. Cheers

betsie (May 4, 2021 at 9:03)
@henryquinney: Oh, I didnt think about the juniors, that was foolish of me looking at the age categories.
For the sample size and reliability of the results I would have to ask stats at work for the exact numbers. As an engineer I would just make the answer fit my needs (especially in these supply chain crisis days).

You know what ruins a pie chart? Listing the values to 2 significant digits.

giantwhip (May 4, 2021 at 5:05)
pro rider checking in here. Still ride the DH circuit with my rigid Rocky Mountain Soul after sending my Bombers in for repairs

will-wild (May 5, 2021 at 7:02)
@pinkbike I think the "Overall ranking finish position in 2020" chart is a bit misleading, hovering over the pie, it show 45 people finished in the top 5, which doesn't quite add up to the 4 sports surveyed. Otherwise it seems like the data is a bit skewed.

mtb-alan (May 5, 2021 at 10:56)
Sorry. Nerd comment over here...and maybe something Eliot Jackson would agree with:
Stop using *pie charts* for ALL THE THINGS. Use a bar chart when it's appropriate. The Home Continent pie chart for instance is unreadable.

K. Taking my glasses off now.

Not sure I'd pay, but I guess they're having fun

Does it count if I've done office chair jousting?

stiingya (May 4, 2021 at 9:15)
Did anyone else have to google "Oceania"...? When did that become a thing? (and yes that means I'm so OLD I'm not even listed in the survey demographics results)

Thought maybe Jason Mamoa and his custom painted Specialized was getting counted as it's own country now...

TheSuspensionLabNZ (May 4, 2021 at 23:34)
I struggle to believe Americans don’t get taught about anything outside their own country and then I read a comment like this

charliewentoutside (May 4, 2021 at 5:26)
Very cool, but if the data is released publicly like pinkbike says, then quite a few athletes will NOT be anonymous. @ghaas already said this above but I'm commenting again because I think it's important, especially if pinkbike promised these athletes anonymity. Just because a survey has no names attached doesn't mean it's actually anonymous, and I'm guessing that just with this demographic data alone it will be possible to identify quite a few people. With all of their responses in the other sections I'm guessing that number would increase further. I love the idea of releasing data for the public to work with but in this case if pinkbike promised anonymity to the athletes, then I think the data will need some careful editing before it's publicly released to remove sections that would make it possible to identify riders.

henryquinney (May 4, 2021 at 7:23)
As you can imagine, we've discussed this at great length, as well as the best way to ensure that we deliver on our assurances to the riders that the results will be anonymous. I really hope you enjoy the results but I have a feeling they're not going to be in the form that you're anticipating. As @schulte1400 said, it will be suitably vague. Cheers.

SprSonik (May 4, 2021 at 11:56)
Looking forward to seeing the perspective of these top athletes, since most are "muzzled" or "filtered" by sponsorships.

scottgwert (May 4, 2021 at 5:41)
Thank goodness for this - an often overlooked area, very much looking forward to hearing more

the00 (May 5, 2021 at 4:25)
That depends on which country they are from. Plenty of countries do support athletes in some way. I might be wrong but I think French DH racers get support from their government via their national federation. I think UK elites might get a bit occasionally. Olympic athletes are more likely to get funding.

padirt (May 4, 2021 at 4:46)
Europe leads the world in per capita access to jobs that look like paid vacations to most of us

PAmtbiker (May 4, 2021 at 7:56)
They also lead the world in amount of paid vacation folks get from normal jobs...
Below threshold threads are hidden

orastreet1 (May 4, 2021 at 6:22)
Maybe I missed something, but this isn't a survey but more like a fact finding exercise that just asked the subjects for all the information. Anyone with Google could probably have figured out as much.

pbfan08 (May 4, 2021 at 6:33)
A article discussing demographics that didn't start and end with, "HeRp DeRp We NeEd MoRe FoRcEd DiVeRsiTy". How did this happen?