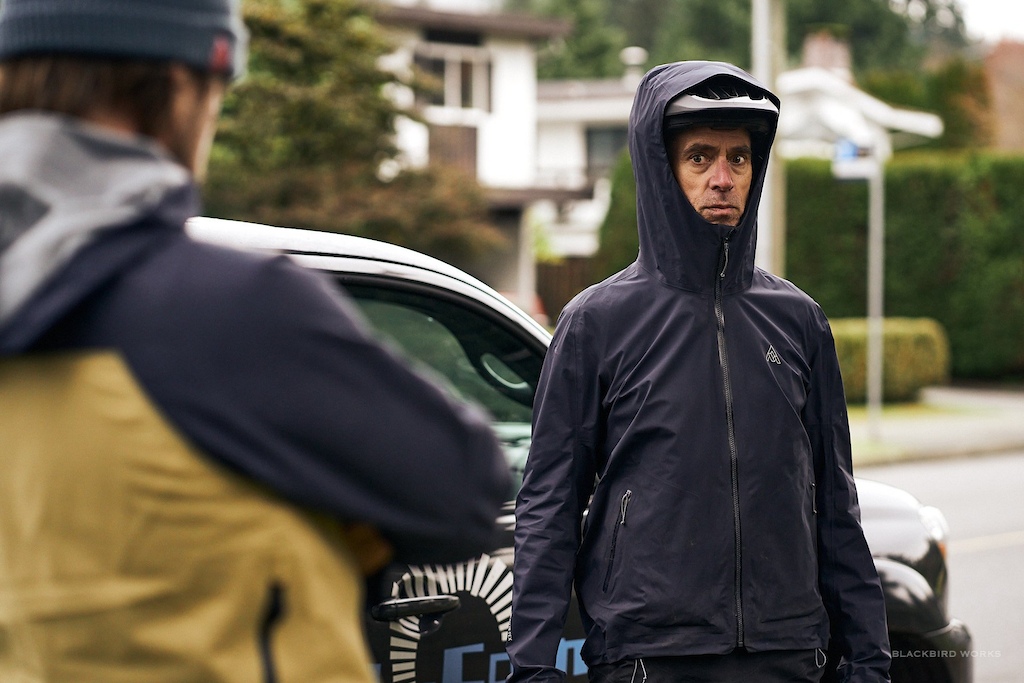 NSMB editor Cam McRae is yet to comment on this situation. Photo by Deniz Merdano.

The mountain bike world has seen a recent rash of "spy shots" from a mysterious user who goes by Tonkatruck. They’re a mixture of a cold war spy and Darryn Lyons and have been known to go to extraordinary lengths to capture spy shots of unreleased bikes. Despite industry efforts to unmask the them, little has previously been known about their true identity. What can be said for sure is that they seem to always have inside knowledge of upcoming bikes, and aren’t afraid to venture behind enemy lines or, even more horrifying still, into shopping mall parking lots.

That apparent insider information is the first piece in a fast moving puzzle. The second piece is the reaction to Tonkatruck's work on local mountain bike site NSMB, where there was righteous indignation at the prospect of spy shots. Perhaps the lady doth protest too much?

The now infamous Norco spyshot.
The mountain bike industry is a small place. We all have many friends that work for various publications and we’ll often chat either at the trailhead or currently, more often than not, over Instagram or WhatsApp. We’re also always very happy to support people who enjoy and use the site, so we decided to get in touch to send Tonkatrucks a t-shirt. This is where it gets weird.

When our staff member added TonkaTruck on Whatsapp it came up as an already saved number. That contact goes by the name of Cam McRae, editor at NSMB and author of the aforementioned article condemning spy shots. 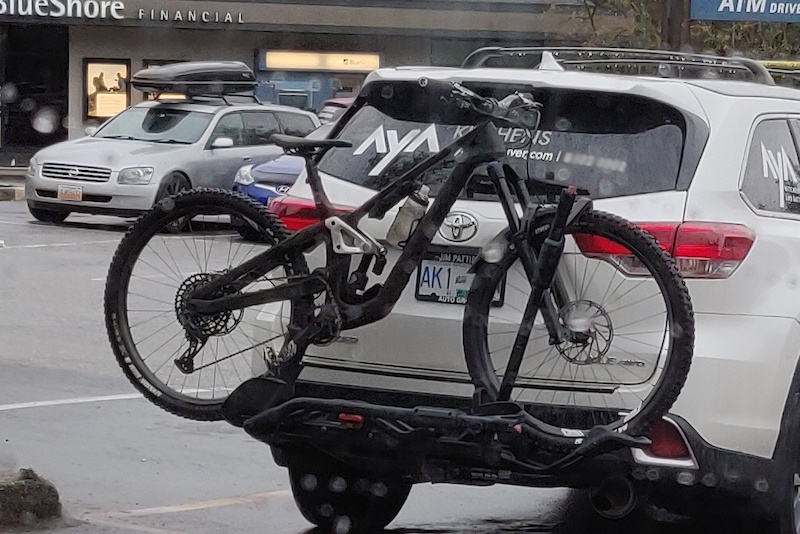 Tonkatruck is not a one-trick pony. They can also fire from the hip at close range, as demonstrated here.
It’s unclear whether Tonkatruck and McRae share the same phone, or indeed if they are the same person. Wild speculation on the greyish-and-rainy-web, the Vancouver version of the dark web, suggests that the mystery photographer is indeed NSMB editor Cam McRae. Could it be a false flag? Could it be that he’d already written the article and wanted to stir things up? Maybe he was just bored in lockdown?

Cam McRae has forever been know to us at Pinkbike as a “really nice guy”. This should have been a warning that something was up. That doesn’t sound like much, but you’re forgetting this is in Canada. To only be “really nice” and not “really really”... very suspicious.

We've reached out for clarification, but so far Cam has refused to comment. We’re not here to offer conjecture, only the facts, and we’ll report back as this story develops.

"And NSMB Would have gotten away with it too, if it wasnt for your meddling Pinkbikers!"

T-Bot (Apr 1, 2021 at 14:25)
@brianpark I know it’s you. Where do you play with tonka trucks? The park. You Park your truck. Brian from Family Guy is smart, smart like you to push us into thinking it’s your direct rival.

ReformedRoadie (Apr 1, 2021 at 8:35) (Below Threshold)
@zombiejack33: Pretty sure Pinkbike dwarfs NSMB by a wide margin if you are measuring traffic. This is actually probably great publicity for them.

zombiejack33 (Apr 1, 2021 at 8:42)
@ReformedRoadie: Im talking about who's insult was best, not size of viewership. Keep up with the conversation

ReformedRoadie (Apr 1, 2021 at 8:47) (Below Threshold)
@zombiejack33: I'm talking about it being a vicious attack from a toddler on an adult sumo wrestler...
you can visualize that, right? and maybe even get it.

srjacobs (Apr 1, 2021 at 8:59)
@ReformedRoadie: Some might even say the toddler made a calculated attack, knowing that they would get some great publicity out of the deal even if the sumo got a couple of shoves in first.

bananowy (Apr 1, 2021 at 9:52)
@zombiejack33: Did they own though? "Harder shots"? I've read Uncle Dave's article. He's entertaining as always, great writer, but it looks like PB just made a light hearted April Fools' joke while NSMB are still salty. Not to mention that they're putting themselves in this position by taking advertisers' side instead of readers' in this whole inconsequential little shitstorm. All those strawmen about catching "hypocritical" PB editors on unreleased bikes... as if that will ever happen. There are no real "spy shots" here, only shots of bikes that were meant to be "leaked" to generate buzz (or at least not actively hidden). PB understand that. If NSMB don't or are too slow to react, their loss. Oh and Cam's earlier rant about "unwritten agreements"... Give me a break. If there's a real embargo, it's sure as hell down on paper and signed.

srjacobs (Apr 1, 2021 at 10:35)
@zombiejack33: I was just playing along with the metaphor, but if you want me to put it clearly: I think NSMB is getting a lot of press out of this, and has probably gained significant readership because of it. I think this was calculated on their part, much like how a music critic who disses a famous artist then becomes famous themselves only because the artist fires back at them.

I think NSMB's original complaint against PB is pretty weak, despite the fact that they might throw better insults. I've got to say, this article was hilarious on PB's part, though.

zombiejack33 (Apr 1, 2021 at 11:18)
@bananowy: Well I mean their point is solid, so many pinkbike fanboys that swarm anyone who thinks outside of the pinkbox. I agree with the saltiness but they other perspectives on events are allowed are they not?

bananowy (Apr 1, 2021 at 11:23)
@zombiejack33: Of course they're entitled to their opinion. Just because this time I agree with PB's take, I'd never ever suggest NSMB shouldn't speak their minds. I have lots of love for both.

lkubica (Apr 1, 2021 at 11:45)
@zombiejack33: Their bike content is more in depth indeed. But the spy shot article was a total bs. They may joke about taking the Leo's approach, but this is what they actually do. Somehow I can rarely relate to their non-biking opinions. And their audience simply disregards PB, sometimes you can find an unjustified feel of superiority in the comments.

The combination of this and Uncle Dave’s article is solid gold!

Mtn-Goat-13 (Apr 1, 2021 at 9:58)
Funnies thing here is that 'spy shots' are April Fools all year long (for anyone that doesn't know yet, looks like new bikes being 'caught' but its planned mostly) - this article is just another April Fools joke piled on top of the 365 rest of 'em. But, I still love spy shots & who doesn't. Just talking reality vs. unicorns

Nonsmoker (Apr 6, 2021 at 20:27)
Why even post this story & others like it? By heading the story with "April Fools" you are ruining the whole thing. The world is too soft.

tonkatruck (Apr 1, 2021 at 16:29) (Below Threshold)
unfortunately they dont have any form of humor. I actually made an account, tried to explain myself and BEFORE all that, spoke with the Editors in charge. Surprise surprise, that account is still blocked from posting and i qoute " this has never happened before, looks like we are having some technical errors in regards to your issue of not being able to comment"......LOLOL

roggey (Apr 1, 2021 at 16:42)
@tonkatruck: hey there, apparently it's because you use a VPN. It's true that we don't know why your comments are able to be posted. Believe me, we'd love to have you wade in and say your piece. If you know anything about us, it's that we don't mind a good debate. Try disabling your VPN and re-post or comment again. If you're still having trouble, pls reach out to me directly - here or elsewhere, I'm easy to find - and I'll help get it sorted out.

nielsvk (Apr 1, 2021 at 18:32)
@tonkatruck: Hi, I tried to troubleshoot your account issues with you but you responded that you didn't want to waste your time. If you change your mind I'm still happy to help.

Veggiemoto (Apr 1, 2021 at 7:17)
This would be funny, because Henry's command of snark is epic, but the fact that PinkBike is exponentially bigger than NSMB makes it more akin to bullying and as a result I just find it depressing.

ReformedRoadie (Apr 1, 2021 at 8:38)
Henry did them a solid...they are probably getting more traffic now than ever.

brianpark Mod (Apr 3, 2021 at 12:08)
Just to be clear, I chatted with Cam and Dave to compare notes on our respective April fools stories beforehand. We don’t see eye to eye on the spy shots issue and we like to talk a little trash, but we’re all on good terms.

Anywho, can you have 2 whatsapp profiles under the same cellphone number? Don't see how that would work.