Updated: Who Can Still Win the World Cup Overall in Snowshoe? 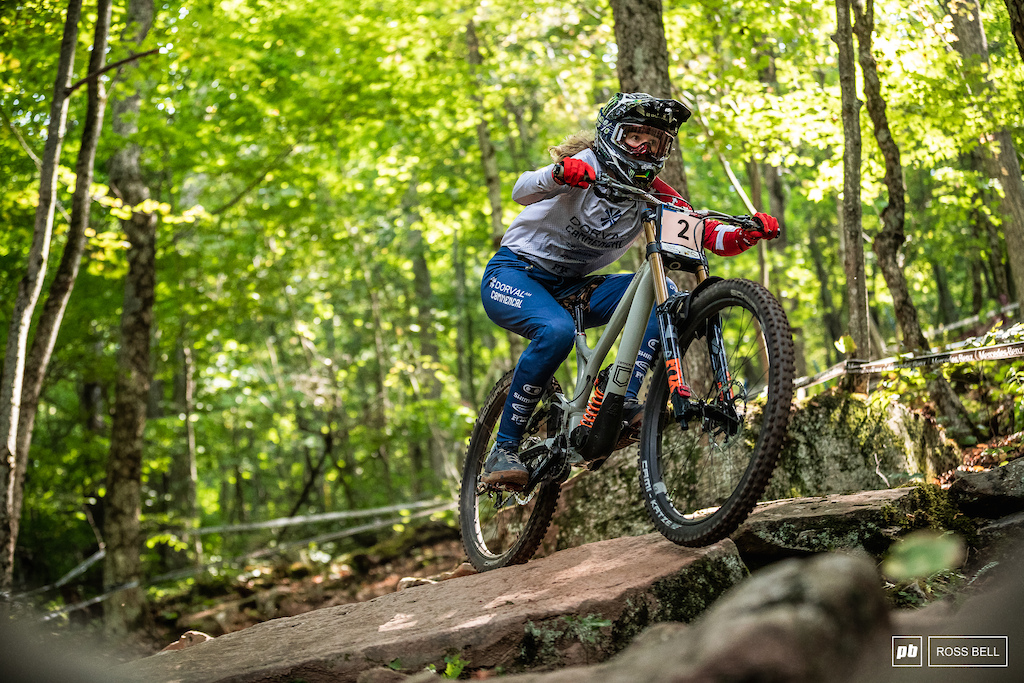 After Wednesday's racing, the overall titles have only got closer. With it all coming down to finals on Saturday, here's how the overall looks now.

There are no points for qualifying and instead they are all rolled into the points allocated for finals. Here's how that scale looks for Saturday's race:

Myriam Nicole is still the hot favourite in the women's field as she recovered from a race run crash to finish fourth and secure some valuable points in her race yesterday. A third-place finish or better will guarantee her the title and if Camille Balanche or Vali Holl don't win the race, she can finish off the podium and still take the overall.

The men's race is a tighter affair with just 46 points separating Daprela and Vergier. A win for either rider will secure them the title and there are a few scenarios where they could finish within five points of each other. Bruni's best hope for the title is to take the win but even then Daprela only has to finish fifth or Vergier second for him to be pipped at the post.

Although four riders are technically still in each title race, it's pretty unlikely that either Tahnee or Reece will claim a title on Saturday. Both riders will be relying on a win with their rivals scoring very few points. Still, stranger things have happened and with rain forecast over the week they are definitely still in with a shot.

What if there's a tie?

If riders are tied on points, UCI Rule 4.9.008 states, "Riders tying on points are ranked by the greatest number of 1st places, 2nd places, etc. (total points in the standings of the concerned round) taking account only of places for which points are awarded for the world cup. If they are still tied, the points scored in the most recent world cup event are used to separate them."

The gripping finale of the 2019 World Cup season will probably sit freshly in the memory of race fans around the world as both series were decided in the final runs of the season. The year-long battle between Tracey Hannah and Marine Cabirou culminated in Cabriou taking the race win but Hannah taking the title, while in the men's race, Danny Hart's heroic victory was enough to separate Loic Bruni from Amaury Pierron by 40 points. It was one of the greatest downhill World Cup weekends in history and we could be on for a similarly nail-biting battle 2 years on.


In the men's series, Thibaut Daprela has a healthy lead but a resurgent Loris Vergier will be chasing him down hand over fist while Myriam Nicole is favourite for the women's title but Camille Balanche will be ready to pounce on any mistake for her own claim to the crown.

How does the points system work in Snowshoe?

With two World Cups in a week and 450 points still to be allocated, things could change quickly in Snowshoe this weekend. The first race will work as normal with up to 50 points already awarded for qualifying and a further 200 on offer later today for the race. However, for the season finale, there are no points for qualifying but the totals are combined on race day, this means we could see a 250 point swing in one afternoon of racing. 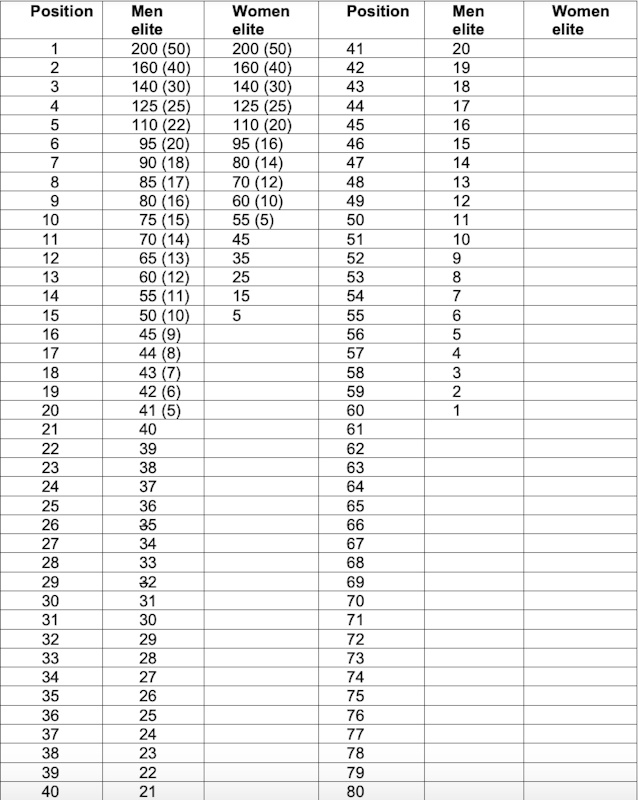 In Saturday's race, riders can score the regular amount of points plus those in brackets
Who can still win the titles?

Mathematically, a lot of racers are still in contention for the overall titles. In the men's series, there are 10 riders within 450 points of the top spot and in the women's series there are six women still racing for the title. However, for Eleonora Farina or Amaury Pierron to win the overall, they would probably need everyone above them to DNF in both races, so it's more likely to come down to two or three main protagonists in each series. Here's how the series stand after qualifying yesterday: 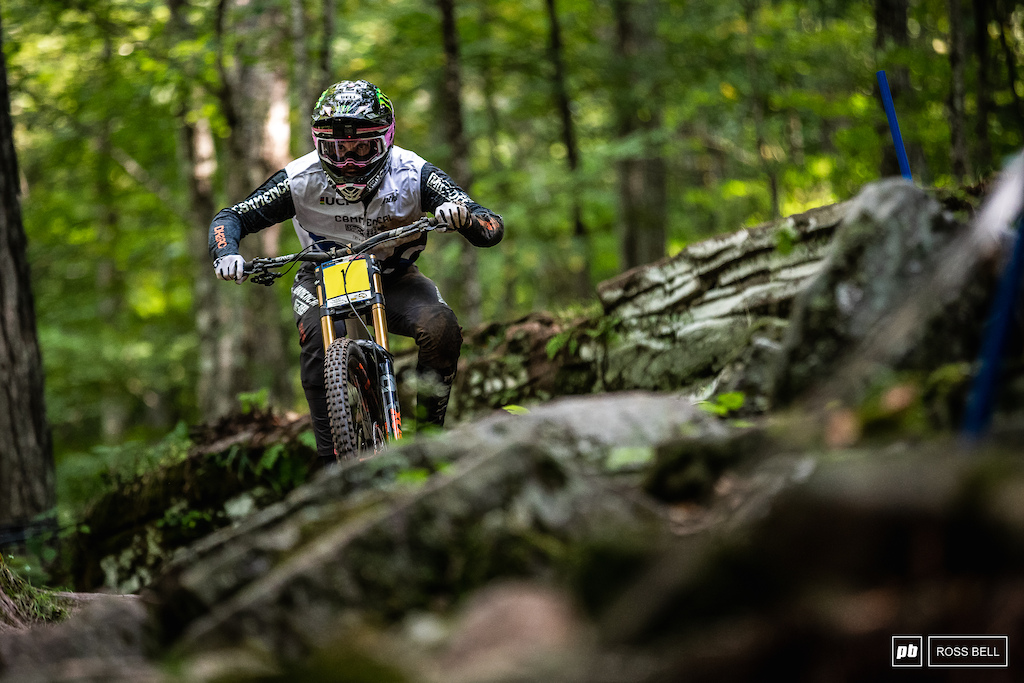 Thibaut Daprela needs just 265 points across the two races, e.g a third and a fifth, to make it mathematically impossible for Vergier to take the title, regardless of any other results. He will also win automatically if he wins Saturday's race.

For Vergier, his goal is to score 187 points more than Daprela over the next two races but regardless of what he does, he'll still be reliant on Daprela's results to claim the title. The best-case scenario for Vergier is to score a full 450 points and hope that Daprela doesn't hit the 265 number he needs to secure the title.

Loic Bruni has an outside chance of taking the title but he would need to win both races and have Daprela score less than 165 points to take the win. 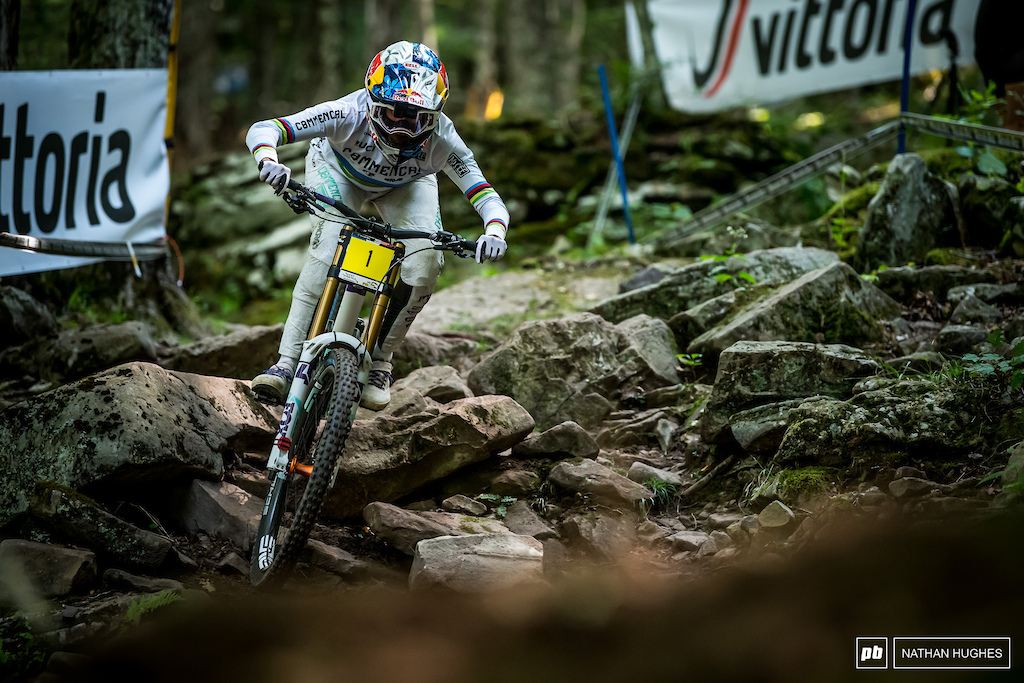 At one point this season there was a dead heat between Balanche and Nicole in the overall but Myriam's back-to-back wins have set her up as the favourite to take the title this weekend. The race is closer than in the men's field with just 125 points separating the two women and Tahnee Seagrave and Vali Holl also within 200 points of the lead.

Myriam Nicole needs to score 326 points over the two races to secure the title without relying on Balanche's results - she could do this for example with a second in today's race and a third in Saturday's. The only way she can secure the title today is if she wins and Balanche finishes outside the top eight and Seagrave and Holl both finish worse than sixth so basically, the women's race is probably going to go down to the big showdown on Saturday.


The picture will look clearer for all the riders after this afternoon's race. It may look like some of the titles are close to sealed but most of these riders have never been in this situation before and with the pressure of the title looming, anything can still happen. We'll update this article later today when the results drop.

cpscotti (Sep 15, 2021 at 8:55)
If he somehow makes it into the livestream (being near the hot seat at the beginning) the world will have won the title today.

jeffrocx (Sep 15, 2021 at 13:17)
Can someone add up each rider's race times for the whole season and see who went fastest overall across every course all season? I would but.. Lazy.

paulskibum (Sep 17, 2021 at 15:47)
@c-radicallis: Yes but if the aim is to add all the times together to see who did all the races fastest a DNF scres it - a slow roll down the hill gives you a time at least but a stop and dont finish leaves a hole. I guess you can call it 10 minutes for no time recorded or times over 10 mins.

thegeologist (Sep 15, 2021 at 8:43)
I am really excited about this race, last year was one of the best moments I have witnessed in sports. Have my work calendar blocked off for the afternoon and set as "busy", beer in the fridge, and ready to go!!!

mrpfp (Sep 15, 2021 at 9:01)
Fully agree. Being in the finish line crowd when Danny came through green was the most electrifying crowd experience I’ve ever had.

bontragerdestroyer (Sep 16, 2021 at 5:50)
The big lesson here, ENVE wheels should stick to road cycling and leave DH alone. Thibaut might second on that one...

c-radicallis (Sep 17, 2021 at 1:39)
To be fair any wheel would fold just the same after having the tire ripped off on that rock garden

bontragerdestroyer (Sep 17, 2021 at 9:20)
@c-radicallis: I can't reply with any guarantee, but I can guarantee that if I was to try I would not use an Enve... Also, the other guys riding aluminium DT Swiss (which are a fraction of the price) seemed to have been just fine.

c-radicallis (Sep 17, 2021 at 16:31)
@oliviersimard13: I would never buy Enve rims either (or any carbon rim for that matter), but blaming Enve for that failure really makes no sense.

Everyone is running good wheel setups nowadays, and wether one flats or not mostly depends on what tire pressure he runs.

juanargent (Sep 15, 2021 at 15:50)
how about including the juniors? Some of the best racing is happening in the lower classes and they could use a mention at least.

likeittacky (Sep 15, 2021 at 11:01)
Is the guy with the clicker at the finish line in the track analysis end of video with Eliot Jackson the finish line timer for the runs?

what was he doing?? Surely that's not the way they stop the clock is it???

abueno (Sep 15, 2021 at 12:58)
Pretty sure there are sensors on the bikes fork that cross a beam that is strapped to a shark next to the gate, so once the shark bikes down because it is startled by the bike crossing, the time is inputted into the books. Sometimes the shark losses a tooth, thus the time has to be confirmed..that’s when the the guy next to Jackson comes into play..this could also be an elaborate ruse. ¯\_(ツ)_/¯

As far as I can tell he was just clicking the out of a certain sector. They were probably a few people doing it and it lets the organisers know where some one is on track, a bit of an extra checkpoint, when combined with the splits.