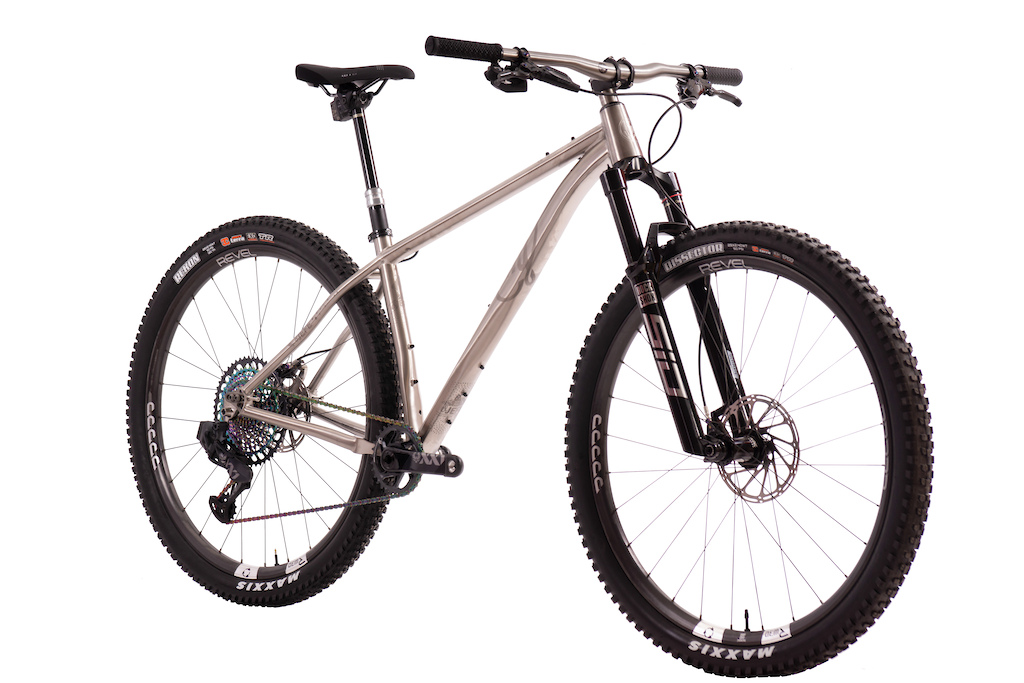 When you have a Tour Divide winner riding your frames, it makes sense to produce them a bike that can go as long as they can. That's exactly what Why Cycles did for Jefe Branham, winner of the 2014 pan-American event, and no stranger to massive backcountry rides. Now they will be releasing a replica version for customers too.

Named el Jefe, Why Cycles describe it as a combination of their current frame line up with it being lighter than the backcountry-focussed Wayfairer but less swoopy than the S7 trail hardtail. As a result, they say the el Jefe is suitable for bikepacking, technical singletrack, and even the start line of an XC race. 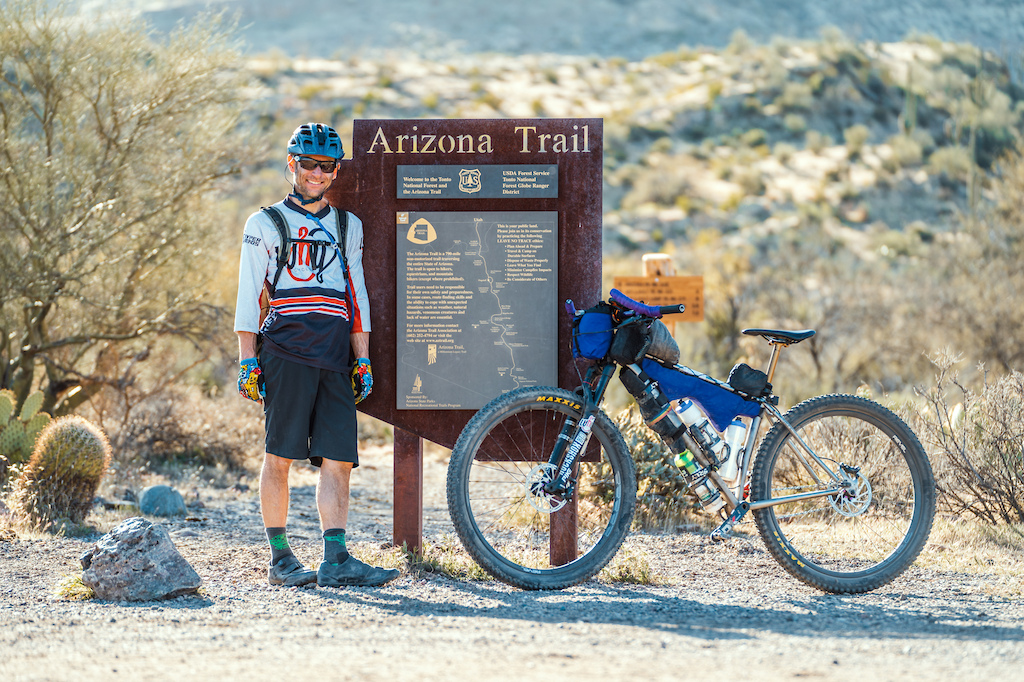 Jefe Branham set the fastest known time for a singlespeeder at this year's Arizona Trail 300.
The bike is titanium tubed, uses 29" wheels and is designed around a 120mm fork. It has clearance for 29x2.6” tires and sliding dropouts with 420-435mm chainstay adjustability. Unlike Why's other bikes, it uses a straight top tube but it keeps the impressive storage capacity with room for three bottles plus plenty of real estate for frame bags, fenders and rack mounts.

Why will only be offering the el Jefe in raw titanium with a sandblasted Lilly logo that's an homage to Branham's daughter. As this is a pro model, Why is taking some inspiration from the skateboard and snow world and will be supporting Branham's racing career with a portion of each sale. 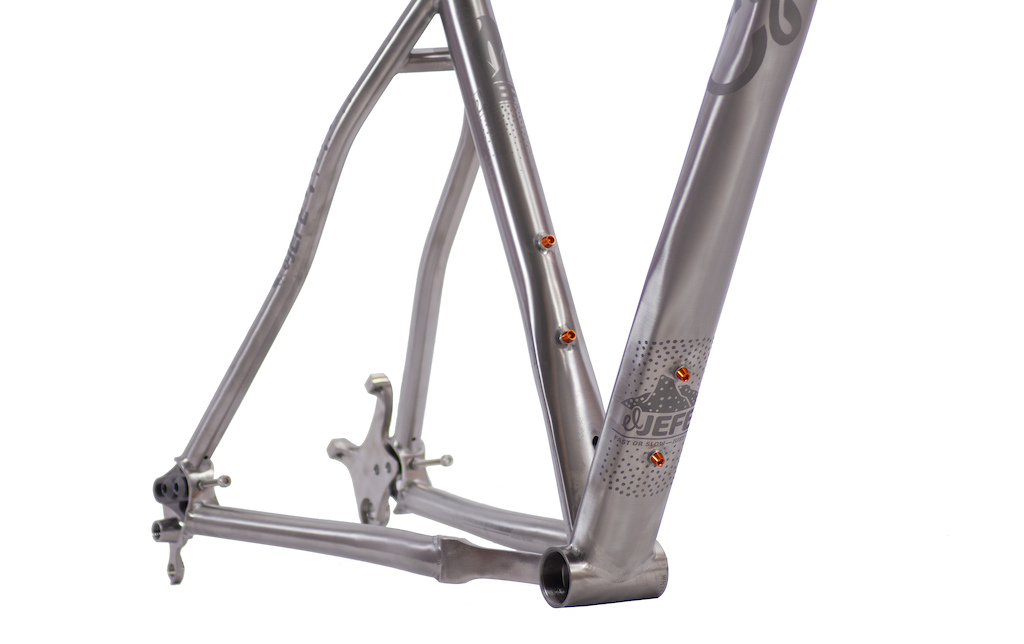 streetfighter848 (Apr 7, 2021 at 10:54)
Frame only package, aka "The ultimate you're on your freaking own package because we can't parts or components from anywhere else like everyone else" package...

The definition of having a bike "in stock" is just not the same anymore... WHY?

desertravens (Apr 7, 2021 at 20:30)
The few bikepackers I know, one of which competed in Tour Divide, are super picky about what they spec on their frames so I can see why (aside from the massive shortages everywhere).

Patrick9-32 (Apr 8, 2021 at 2:53)
Those packages allow you to swap your build kit from your current bike onto this and then upgrade and change parts as they become available though.

streetfighter848 (Apr 8, 2021 at 14:30)
@Patrick9-32: No, I know that. However, that assumes components like BB, headset, brakelines, seatpost, etc are all compatible. Highly unlikely all are compatible.

OlSkoolJake (Apr 7, 2021 at 12:12)
I've noticed over the last year. A small bump in bikepacking related content. I know that's not the primary focus of PB. But I totally support it...

AndrewFleming (Apr 7, 2021 at 14:16)
I thought you were supposed to be unsupported with bikepacking.

Snfoilhat (Apr 7, 2021 at 11:17)
What's the performance:price for getting lighter camping gear versus lighter bikes? Someone's gotta come out with lighter water

itslightoutandawaywego (Apr 7, 2021 at 12:25)
This topic was just mentioned on Jalopnik.

Is there a meme I don't know about?

stiingya (Apr 7, 2021 at 15:06)
Just use "Heavy Water" the rest of the time you ride and swap it out for regular water when you go camping. IF you survive the first part going back to regular weight water will be easy!!

PHeller (Apr 7, 2021 at 15:25)
The advantage would be that when unloaded the bike is pretty light, and when loaded, titanium adds a bit of compliance to an otherwise stiff frame. There is some debate within the long distance self-supported bikepacking community that a hardtail will be more reliable over the long run than a full-suspension, so people search out compliance without pivots.

I do feel however that at the levels in which this stuff matters you've gotta have a whole lot more time than you do money, which is funny, because often the folks who are selling us this stuff have very different lifestyles, and therefore different priorities. I get maybe 4 hours a week to ride, usually in 1-2 hour stints, so my bike is built to be fast where I'm fast. This bike (the El Jefe) is built to be fast and comfortable for someone riding more hours in a day than I ride in a month.

I think the thing I struggle with the most is the fact that these frames aren't made in the USA. In bulk pricing from Taiwan, they probably cost $1000, maybe less. At these price levels I think I'd rather wait in line for a WaltWorks or something made stateside, unique to me.

hardtailparty (Apr 7, 2021 at 18:39)
Ti is also a lifetime bike for a lot of people. Aside from light weight, it's durable, it doesn't rust, and there's no need for paint. It can also have a fantastic ride quality. It's also pretty rad how you can buff out scratches and wear marks with a red scotchbrite pad.

“ Our frames are manufactured in a small mom-and-pop style “factory” in Northern China. Adam has travelled to China nearly a dozen times, and after visiting multiple factories in Taiwan and China (as well as the United States), chose the current manufacturing partner for several reasons.”

I can guess the reasons:

Their website reads like an assembly of buzzwords without substance. I would not pay that much money for a Chinese TI off the shelf frame when I could get custom Ti from the eastern bloc for far less or custom steel from any of dozens of great US custom builders. In fact that is what I did four years ago, Waltworks. I still love it as much as the day I got it.

Olliemac390 (Apr 8, 2021 at 4:00)
It's out there already, look up Deuterium depleted water. Although it's promoted for it's (likely dubious) health benefits, it should also be lighter than standard water.


What I'd like to see is someone come out with a helium filled frame(or even just a sealed vacuum) Negative weight!

My gripe here doesn't have anything to do with quality. A good Chinese welder can probably stack dimes all day every day just as well as anyone anywhere.

My issue has more to do with "where does the money go?"

How much of that cost is going into the logistics of the frame? The fuel burned crossing the oceans?

How much is going into the marketing, sponsorships, warranties, and staff salaries of US based employees? Why can't they manufacturer the frames stateside? Would that one extra employee the welder, hell, even part-time, negatively impact the business so much?

When the frame breaks and I send it back to the company, do they just toss it? It obviously won't go back to China for repair.

Yes, so much of our material lives is consumable. Yes, 90% of what I own was probably produced in China. In the case of bikes however, all else being equal, I feel like its one of the easier ways of keeping production and manufacturing stateside on a large ticket item.

I'm thinking of buying some carbon rims from China. You might say "that's hypocrisy, you should buy I9, or Revel, or WAO rims!" I disagree. In the case of these rims, that money is cutting out the middle man. Not to mention the price difference is substantial (4x the price for North American made rims). If the USA rim manufacturer suddenly start pumping out rims for $200, hell, even $300, it'd be a no brainer, I'd buy USA carbon rims.

Maybe that's just it. Maybe the welder in China is making bank. Maybe his company is offering him killer benefits, and reducing their pollution. Perhaps that why the frame costs as much as it would made in the USA, because more people are benefitting from that arrangement. Higher pay for the welder, his company, the logistics company, the employees stateside, the consumer. If that's the case, great! But I'm always a bit skeptical, and therefore the prices surprise me, and advocate for USA made where the welder, the owner, the designers, the marketer, etc etc etc...are all the same guy, or at the very least, are living the same life as me.

PHeller (Apr 8, 2021 at 10:29)
It'd be rad if Pinkbike could interview a welder (or welders) in a Chinese (or Taiwanese, Vietnamese, etc) frame manufacturing facility, all anonymously, and learn about their daily lives. Do they like their jobs? They feel they are paid well? Do they know how much the frames sell for in the USA?

Then, comparatively, interview a USA based owner-operator frame builder and ask them the same questions. Maybe compare their take home salary adjusted for PPP.

JVance (3 days ago)
@PHeller: "My issue has more to do with "where does the money go?"

Did you read the article?

NomadNinja (Apr 7, 2021 at 12:12)
"El Jefe" Jeff Branham is legit! If I didn't already have a Titanium hardtail I'd get this, though it wouldn't make me any faster or give me the same suffer grit as Jeff...

rider001 (Apr 7, 2021 at 11:13)
First blush it seems not outrageously priced for ti – but other mfrs offer similar or even semi-custom ti frames for $500-800 less including sliders. But you will have to suffer without the fancy blasted graphics.

hardtailparty (Apr 7, 2021 at 18:37)
@AccidentalDishing: Binary has some incredible prices on their ti frames too. Also made in china.

oldschoolsteel (Apr 7, 2021 at 18:54)
I was thinking to myself, man that's so cool. You could ride that bike anywhere and do anything with it. Then I realized that I have three 1990s hardtails in my attic that could all do the same thing, and probably carry more because they had rack and fender mounts. No Ti ones though... and the wheels are pretty small... and I think disc brakes kind of killed racks... so maybe I do need a new one.

hardtailparty (Apr 7, 2021 at 18:33)
Based off what I see, this could be a fantastic bikepacking rig. Interesting to see the reach so long with such a slack sta and less-slack hta. I'd definitely size down on this one.

diegosk (Apr 7, 2021 at 13:55)
@Snowytrail: idk if you can correlate quality with geography as much these days. Plenty of Asian manufacturers spit out higher quality products than North American manufacturers. One can certainly bring up carbon footprint or supporting a domestic work force when arguing for US manufacturing, but quality isn’t really a deciding factor these days.

Snowytrail (Apr 7, 2021 at 14:16)
@diegosk: Agree 100%, can build quality or junk in either place. From some of the close-up pics on their website it looks like someone is very good at "dropping dimes" on the Why Cycles frames, maybe not Moots level but darn close.

adrennan (Apr 7, 2021 at 14:19)
@diegosk: for me, it is supporting local manufacturing for workforce reasons, environmental, and quite frankly not supporting China. Nothing against their people but the CCP is pretty screwed up (I acknowledge that the US isn't perfect either)