The Wild Side of Mallorca 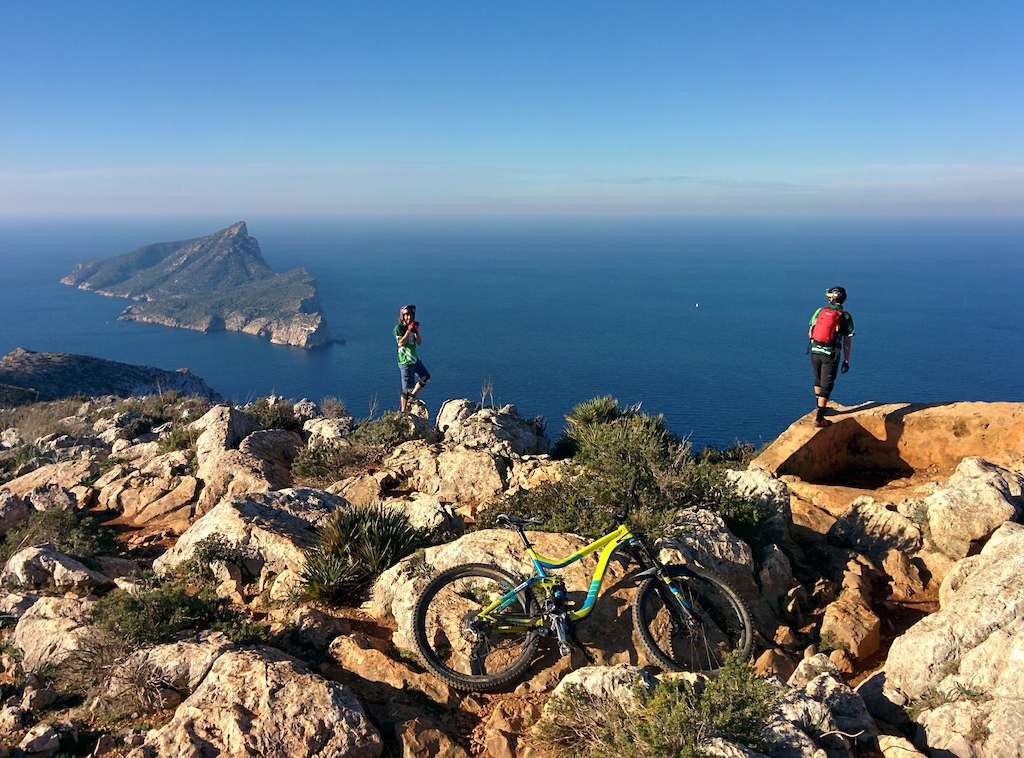 Wild Side of Mallorca
Words & Photography // Yaroslav Alpizar
Mallorca, for most, is a synonym of sun, the beach and neverending parties. It's also really well known by the thousands of road bikers that spend winter and spring months riding on its awesome roads. But for many, the mountain and its wild scenery are still unknown. Not for mountain bikers.

Spending 3 days doing the full traverse of Serra Tramuntana, its main mountain range in the North, seemed like a good plan. This route can be done (and I have done it) in 1 day or up to 3-4 days. You can start on both ends, either Pollensa or Sant Elm. This time we choose to start from Sant Elm. The goal was to avoid as much asphalt as possible following the GR221, a known hikers trail. 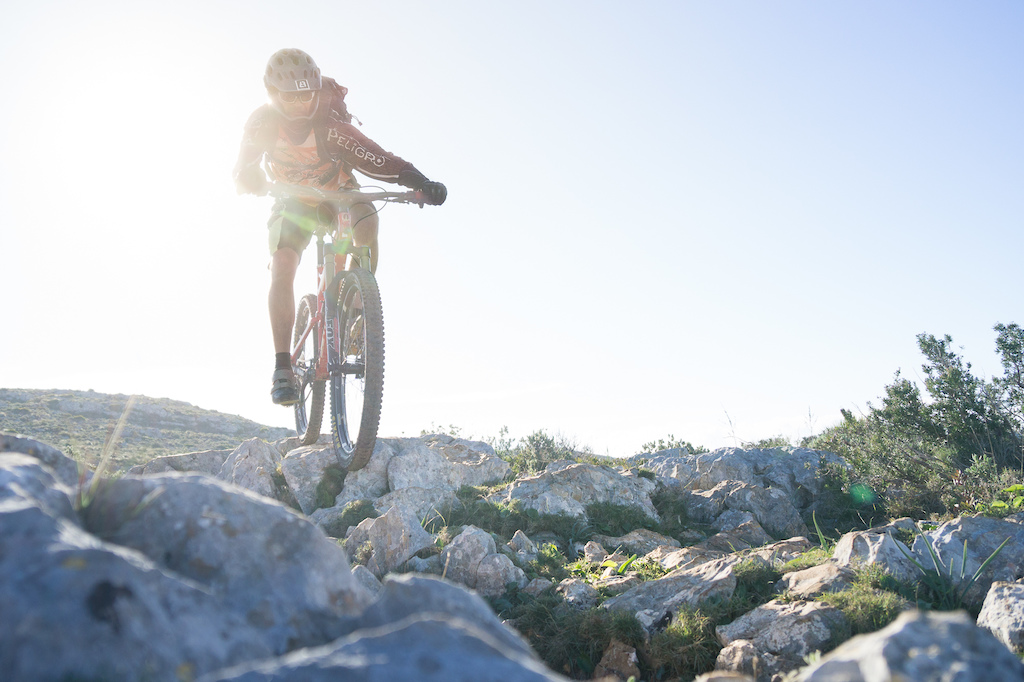 Enjoying the rock garden, there are plenty of them in Mallorca 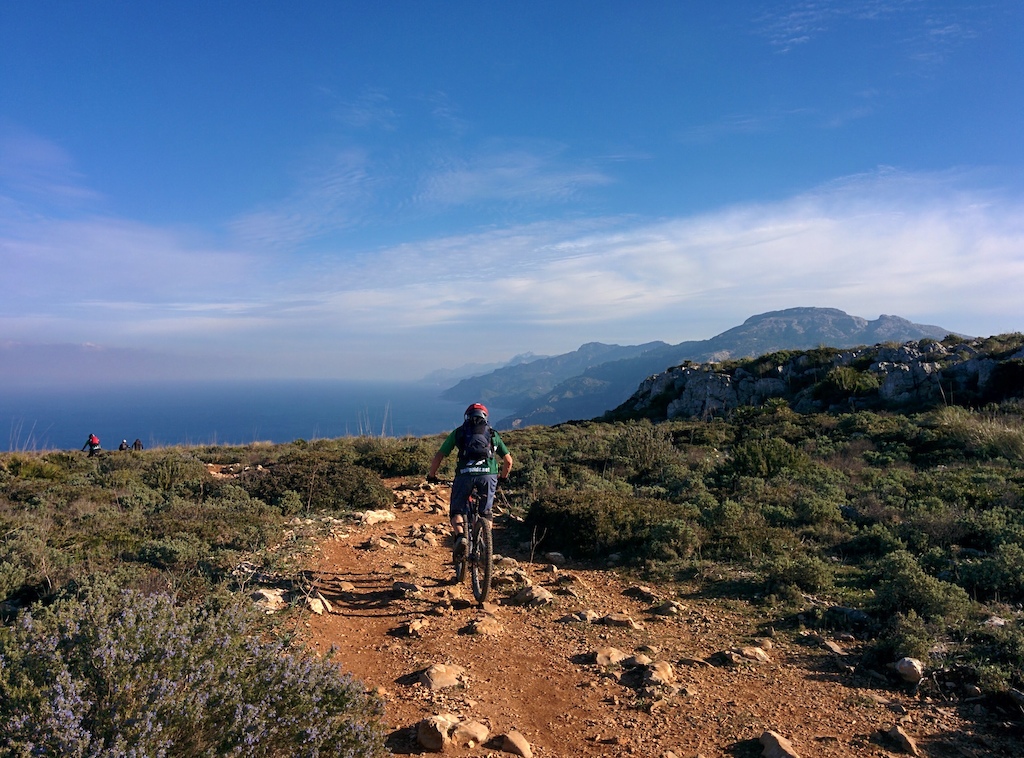 Did I mentioned the landscapes? 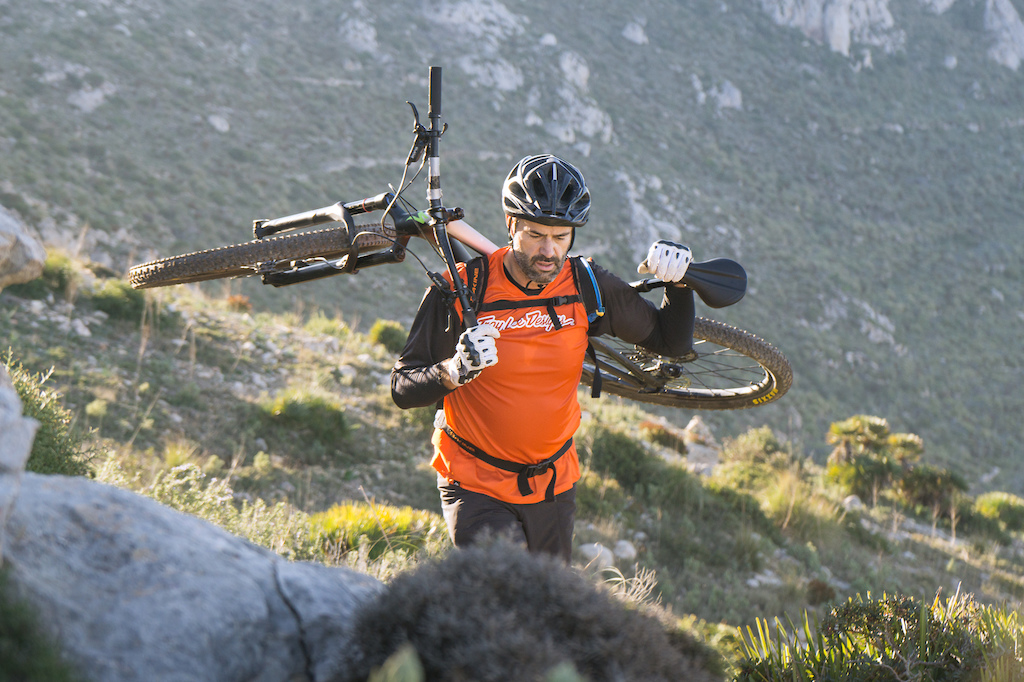 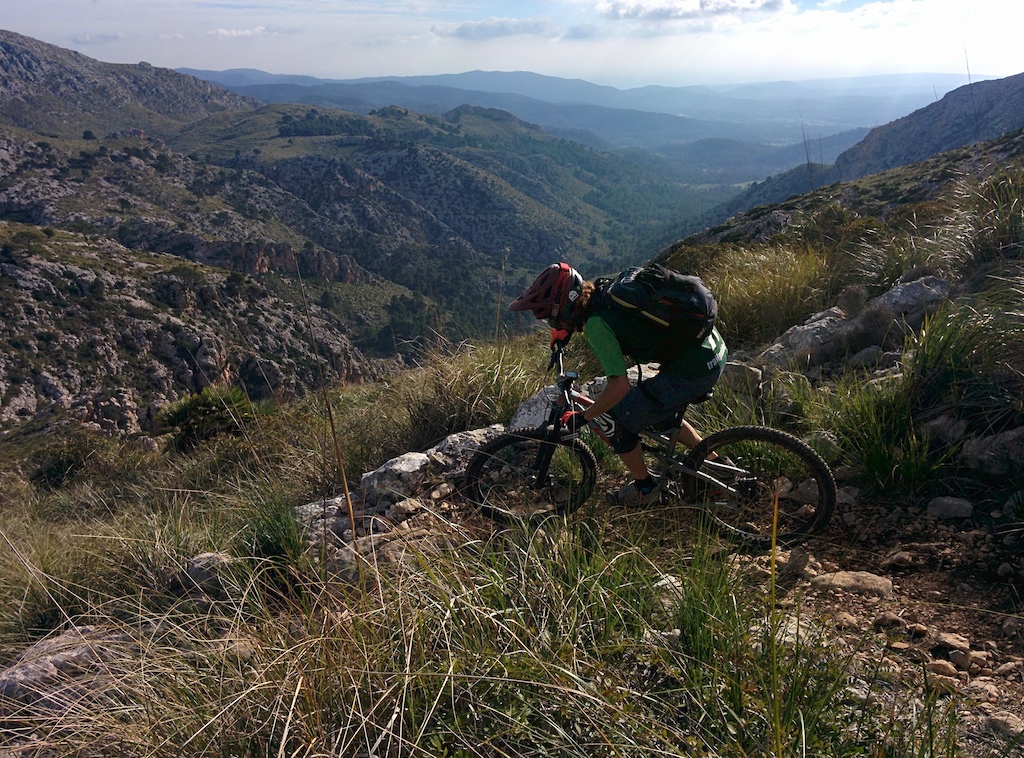 Some hiking involved to get to the best trails 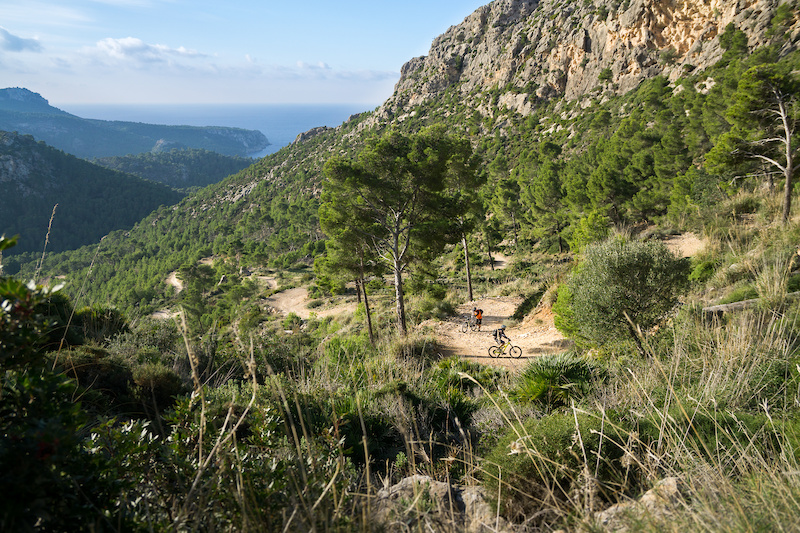 Long steady climbs on access gravel roads is something usual too 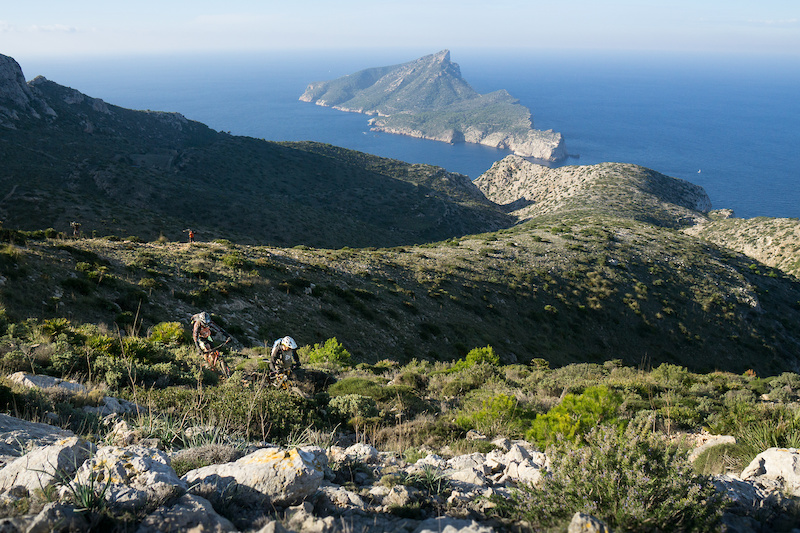 With the help of a friend, we alleviated the weight on our backs, he would carry spare clothes and everything else each day to the pernoctation location. So on route we only had our usual backpacks with some spares and tools. The first day, Friday, we departed at 9am, nice weather, sunny and even bit hot at midday. The goal was to get to Esporles, a small village, not as known as Deia or Valldemossa but either way with some amazing landscape.

One of our companions had a big crash on one of the downhill sections. He didn't harm himself seriously but he prefered to go to the hospital with another friend of the group. While waiting for them to come down and later for transportation, the night was upon us, so from Puigpunyent, we decided to do the last 5km on asphalt. Wise decision as we got to Esporles right with last sun rays of the day. 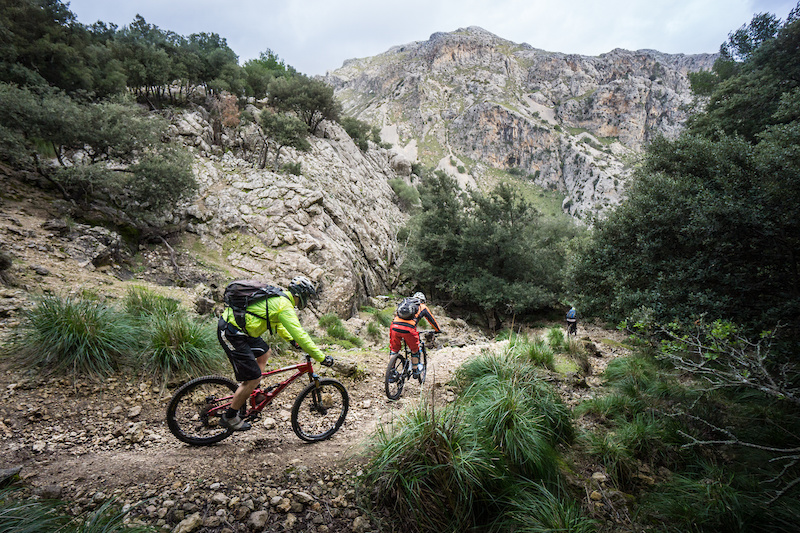 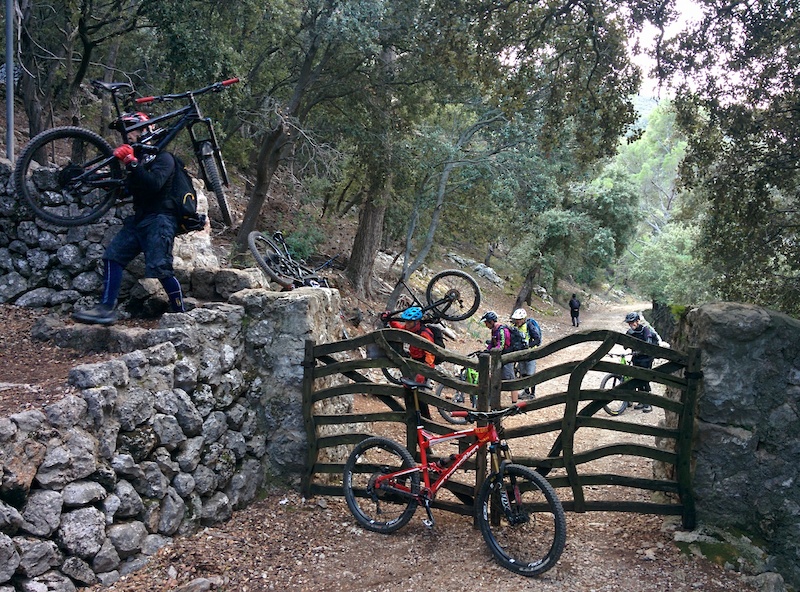 Mallorca has lot of gates, but usually there is an alternative way to cross them 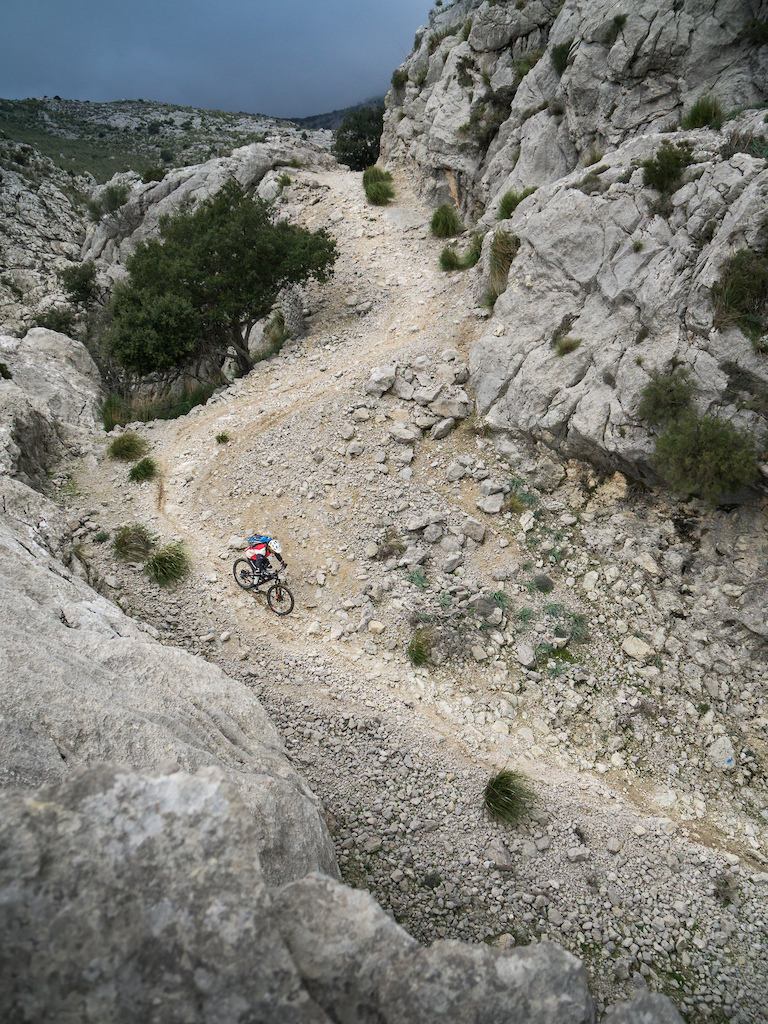 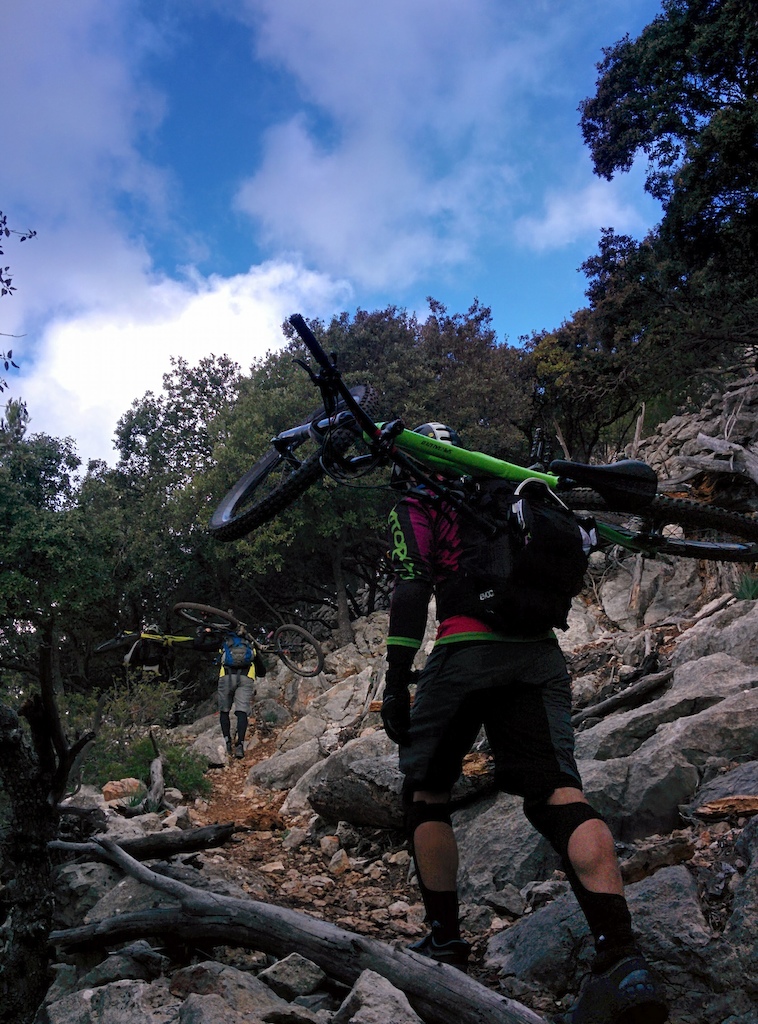 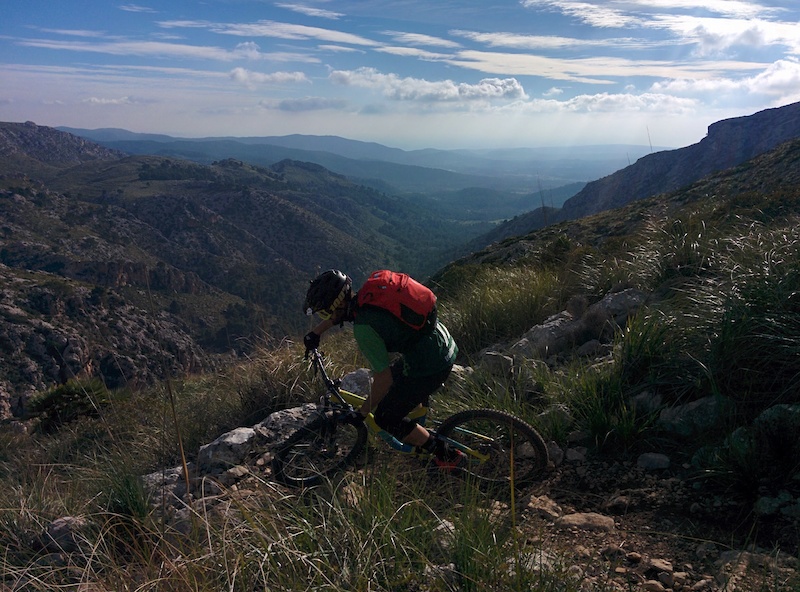 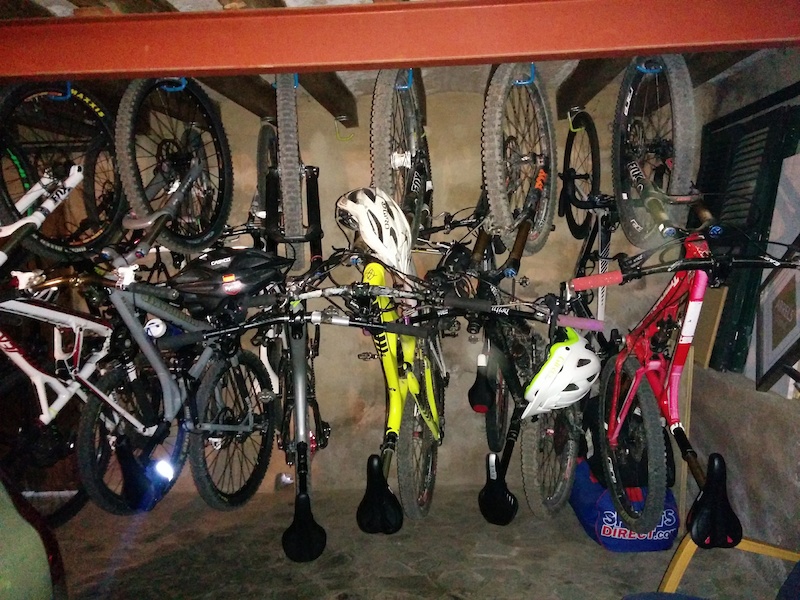 The second day was expected to be shorter in kilometres, but more physical, with some long hike-a-bike sections but with rewarding descents. As it was Saturday some other friends met us in Esporles to join us for the rest of the day. It was cloudy, but no rain, that was good enough. Soller village was the goal of the day, with two big climbs and descents, the day would be long. The second descent, Cingles de Son Rullan, is known to be one of the best of the island, rocky, technical, exposed, with a variety of terrain and with around 800m drop to Deia, close to the sea. We arrived in Soller again close to nightfall, with enough time to shower, find a place to eat, have a couple of beers and quickly hit the bed to rest for the final day. 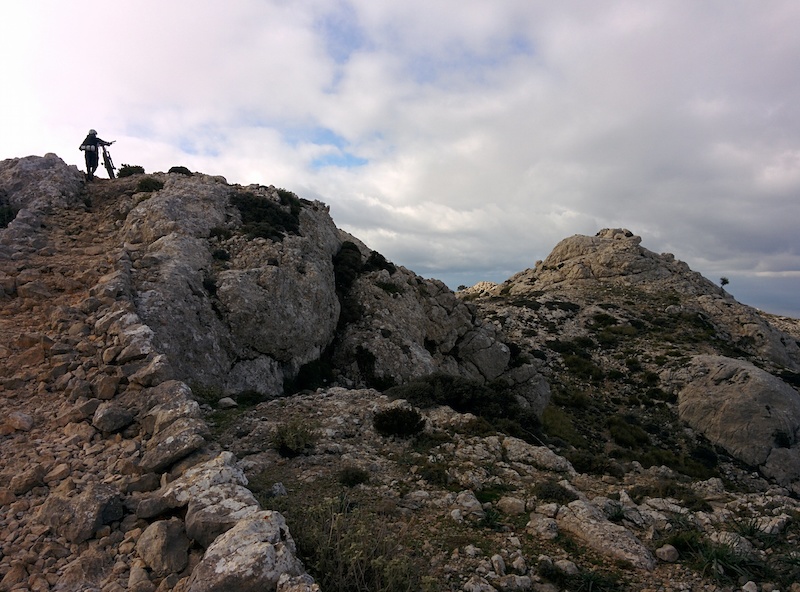 Cami des Arxiduc is one of the most known trails in Mallorca, exposed, rocky, windy, everything you were asking for 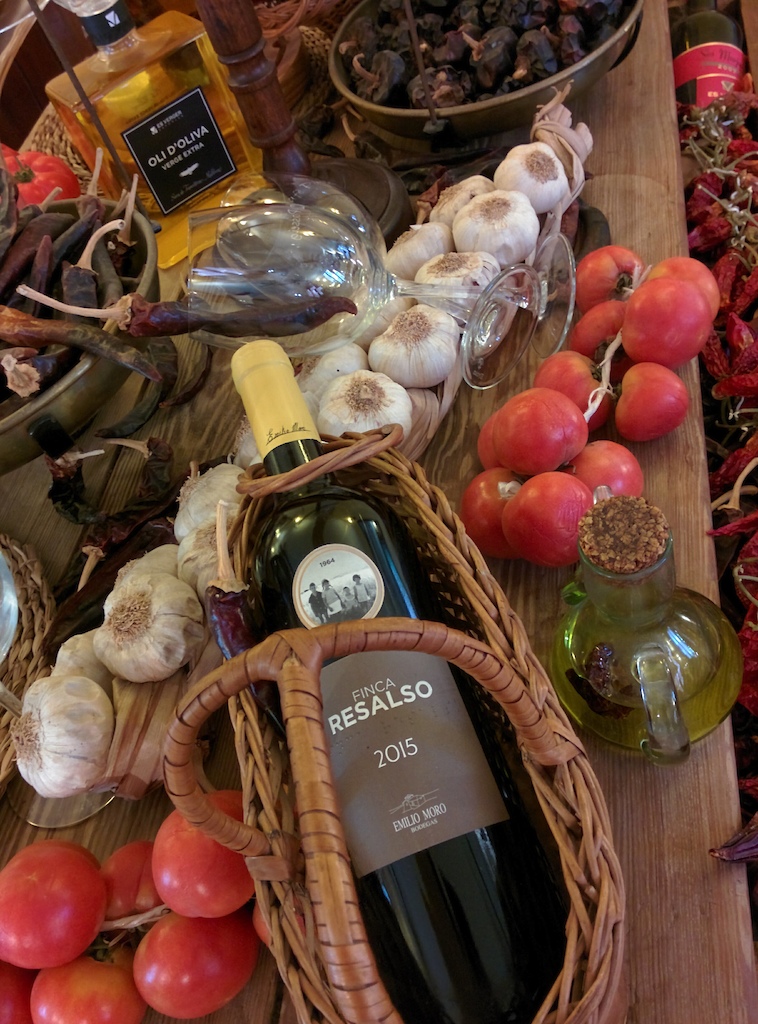 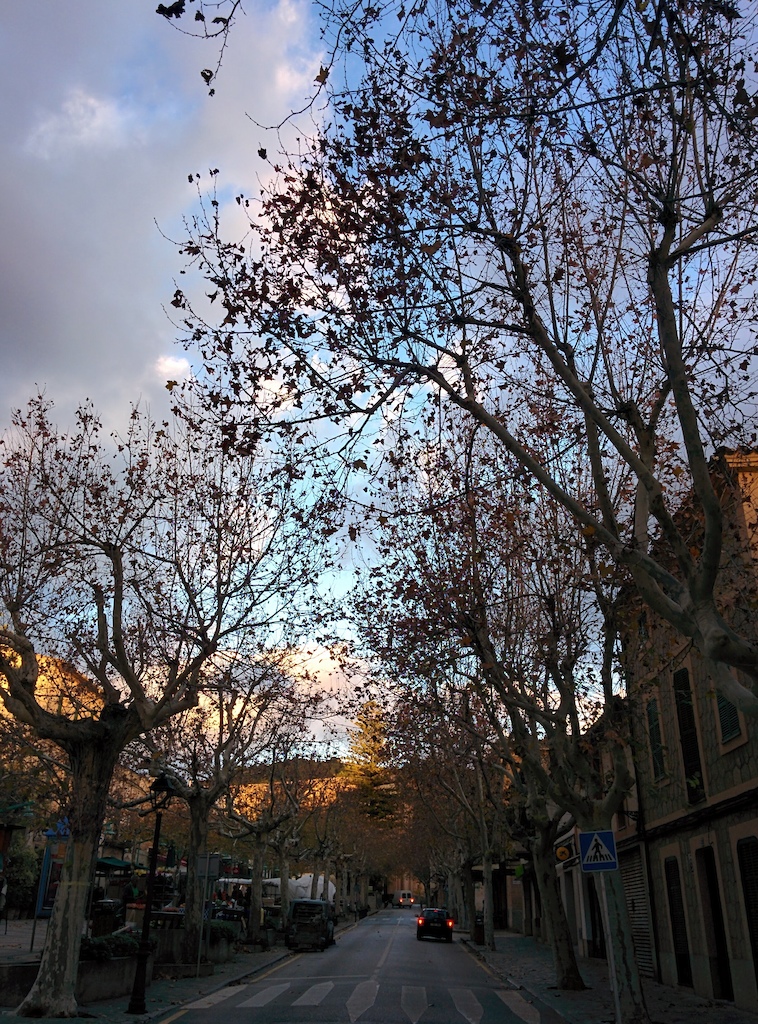 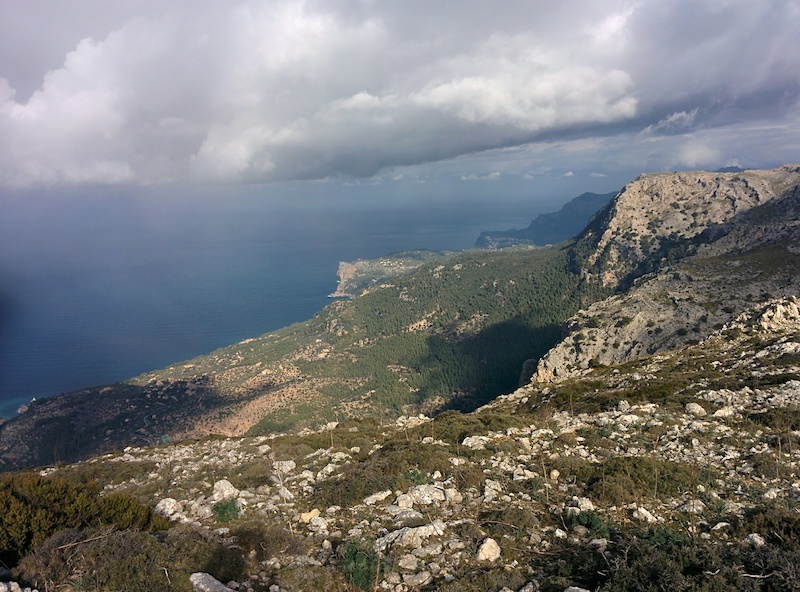 Time to go down... scenery I said? 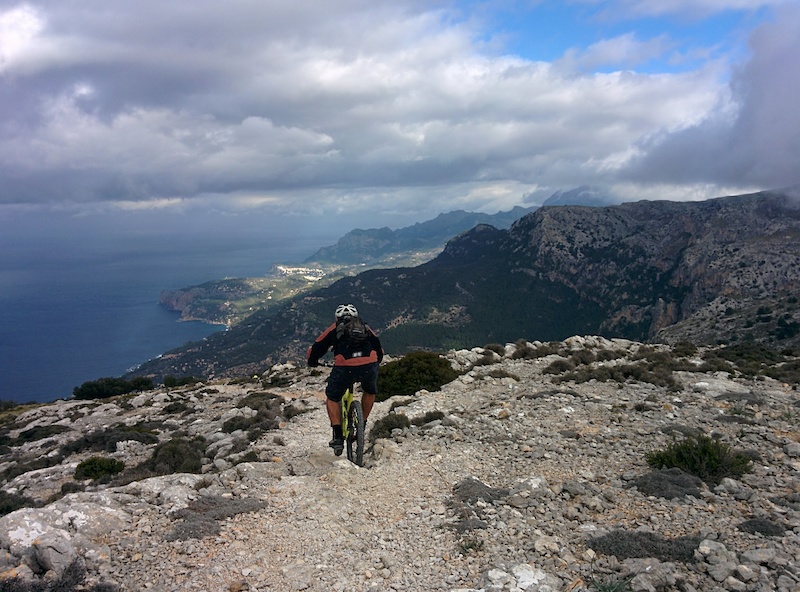 With a plentiful breakfast, the third day started with good vibes, it was somewhat cold and cloudy, but again the weather was great, no rain all day. Our last stop would be Pollensa, 54km from Soller. The first climb was long and hard, almost 1000 meter gain in a bit more than 9km. From here, some tarmac until Cuber dam and then another technical, rocky descent through Almadra tunnels. After some more hike-a-bike we finally got to Caimari, the key to Lluc area. At the end of the day, nearby the group choose to split into 3 couples. The last climb on cobblestones was hard and harsh. From here, just one last awesome trail and a bit of asphalt to get to Pollensa. 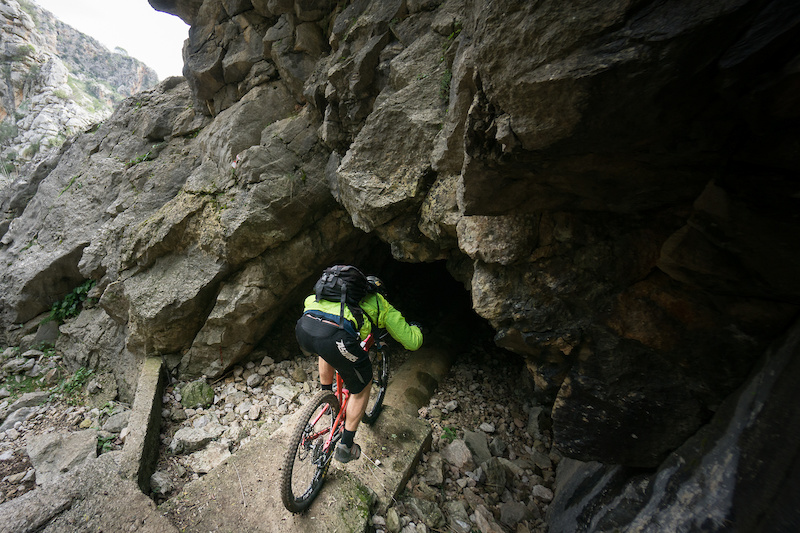 Deep into the rabbit hole 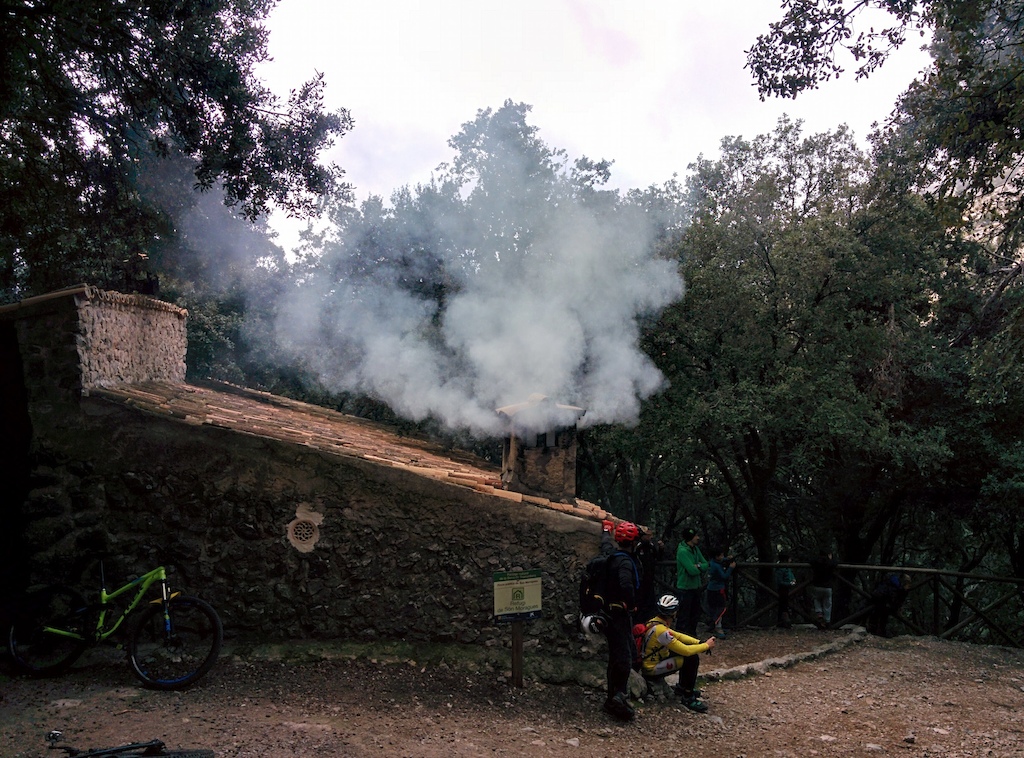 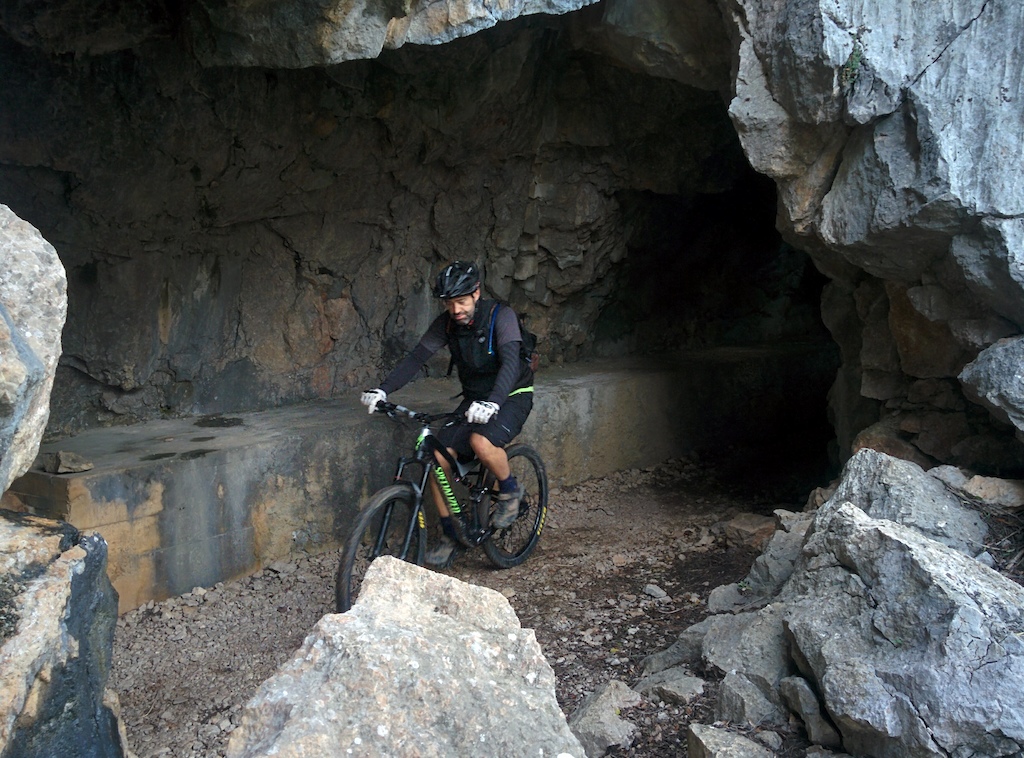 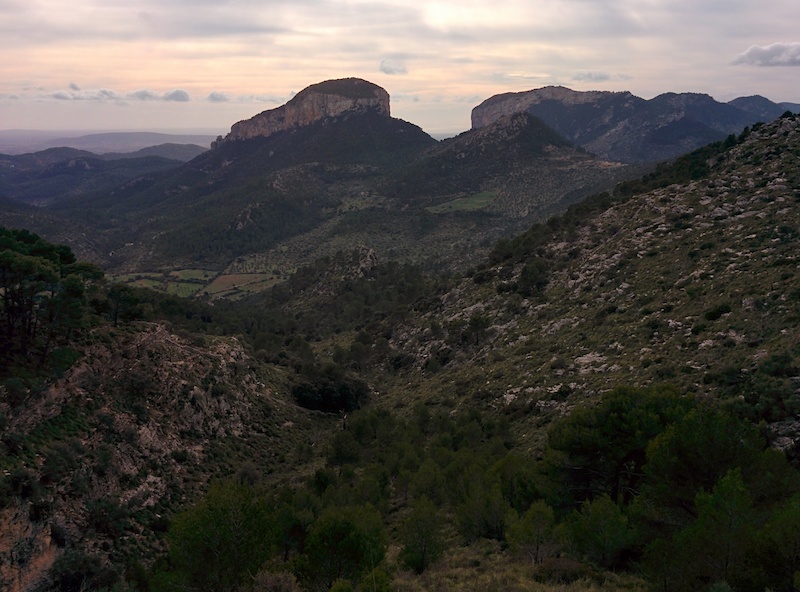 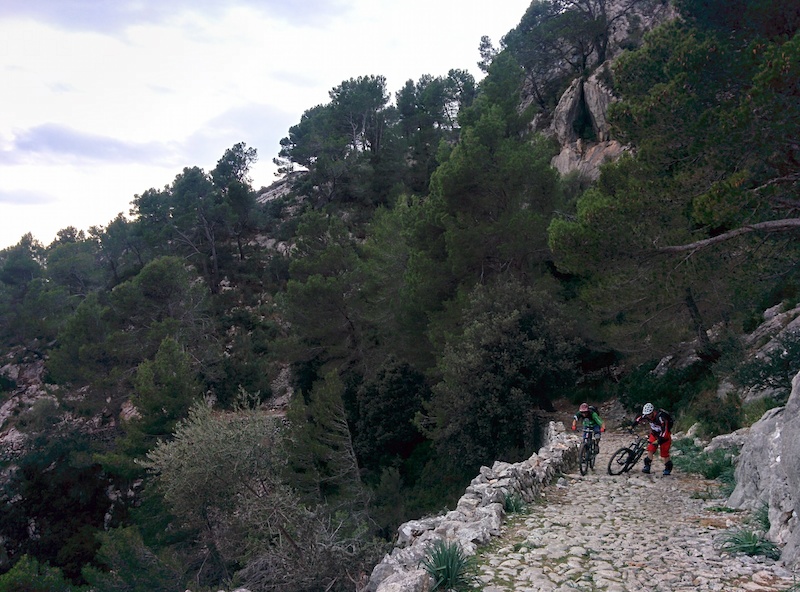 Three amazing days with good company, on the wildest trails you can find in Mallorca, away from Christmas never-ending "let's buy everything in stores" and crowded streets.

elyari (Dec 14, 2017 at 8:29)
Hey, if you check Trailforks, search for "TransTramuntana" there are 3 routes, each correspond to each day. I forgot to add them to the writing

All with our own bikes, mostly all the riders live on the island, I live in Andalucia but came for couple of months with my van and bike, other 2 riders from Germany also on a van with their bikes.

mallorcadave (Dec 14, 2017 at 9:14)
I've been saying for years that Mallorca is the perfect winter escape! Fantastic trails, great weather, great food and wine and friendly locals.

niib (Dec 15, 2017 at 4:48)
My experience on Mallorca was rather mediocre, so I changed to the road bike. Lot of fences, gates and private areas all over the islands. There are trails, but you cannot just ride where you like.

mallorcadave (Dec 15, 2017 at 5:24)
You need local knowledge, most places in the word are the same when it comes to natural trails. Some of the best trails are very difficult to find even if you have a gps. There are very few marked bike trails most are hiking trails.

elyari (Dec 15, 2017 at 5:33)
You are not the first, not the last, to have that experience. As Mallorcadave commented, you can have that everywhere, specially if the area doesn't have a well developed, signed and mapped trail network. In general terrain in the Tramuntana Serra is rocky, harsh, technical and in general there is zero maintenance on them due to (as you experimented yourself) some issues with landowners and lot of terrain been private. I've been riding here for 9 years, so is like riding on my own backyard, I know most of the trails as well as most of the group I usually ride with when I visit the island. That's why having a local guide helps you to get the best of your visit.

mallorcadave (Dec 14, 2017 at 23:30)
It's never as wet as the uk mate! Weather is usually good till end of January,February and March an be a bit wetter. But don't hold me to that, we had quite a bit of snow 2 weeks ago lol!

elyari (Dec 15, 2017 at 0:15)
As mallorcadave already asnwered, Mallorca enjoys a full year of a good weather for riding. Expect bit snow in between November to February, on the mountains but it usually melts in couple of days. Is not as wet and definitely not muddy as UK, Ireland or northern Spain (Galicia, Asturias). You can also ride in summer months, but is hot and you need to plan your ride carefully to have enough water.