Go big with the K.U.D.U. Protector 10, the ultimate pack for hydration and protection. The full back CE Level II protector panel helps absorb impact in a crash and 7-liters of cargo space ensures you can bring what you need for a day on the trail. The protector can be worn by itself for a minimal approach and the pack is capable of carrying a full-face helmet and armor. The 3-liter Crux reservoir can fuel the longest of adventures and the load-bearing hip belt keeps the pack secure and your essentials within reach. It also comes with a bike tool organizer roll to keep tools handy for quick repairs. 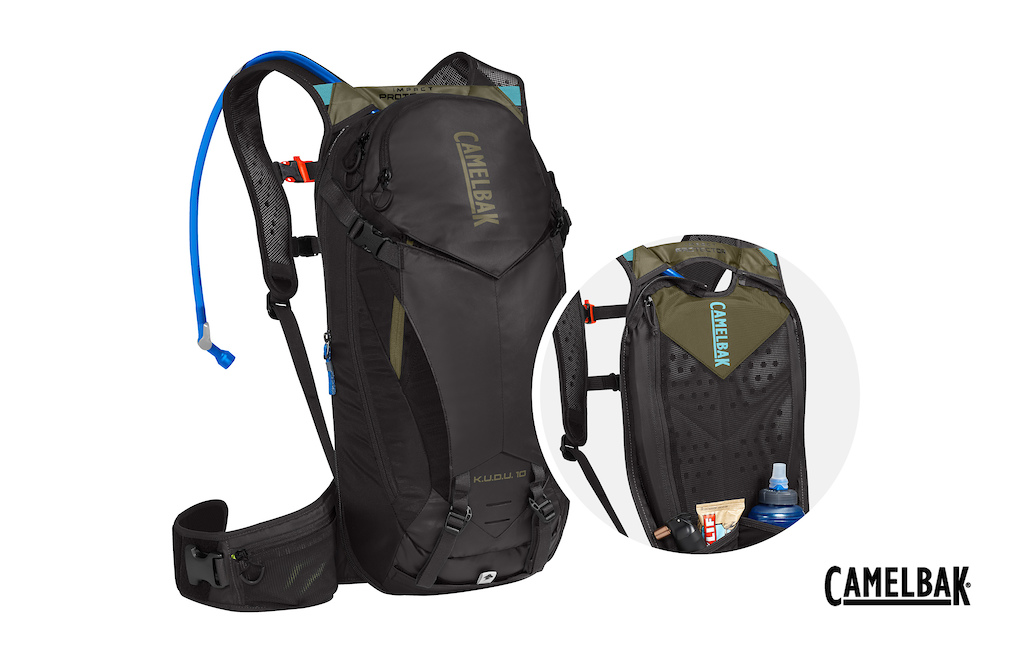 CLICK HERE TO VISIT THE ADVENT CALENDAR CONTEST
There will be new prizes revealed every day in the lead up to Dec 25th so check the Advent Calendar daily on the front page of Pinkbike and make sure you enter for a chance to win.

Winners will be notified via the email associated with their Pinkbike account within 48 hours of their name being drawn.
Happy Holidays!
MENTIONS: @Camelbak


Posted In:
Other Camelbak Sponsored

drjohn (Dec 10, 2018 at 0:11)
Alright, let’s be honest: how many of you just hit the link, even though you don’t care about the item that’s up for grabs??
(Probably all the ones that never win anything like me lol)

vinay (Dec 10, 2018 at 0:24)
Nah, so far only clicked for the Stans wheelset. This one does seem interesting though. My Ergon BE1 is excellent for my typical short rides, this one would complement it for those longer rides. Haven't clicked (yet) though.

aresiusbe (Dec 10, 2018 at 1:04)
Nope, i only click the items i really want or need. This is now the third together with the Stans wheels and OneUp bundle.

That being said: everything else is mine and everyone else can go and take a running jump.

JorisW (Dec 10, 2018 at 1:56)
“If one’s wealth is that high that skipping the change to obtain something of value by a click or a tap is an option then one should not enter such contest at all”

wowbagger (Dec 10, 2018 at 2:43)
@aresiusbe: "The problem with internet quotes is that you can't always depend on their accuracy." - Abraham Lincoln

vinay (Dec 10, 2018 at 5:33)
@wowbagger: "Considering the number of options available in mountainbike sports these days, participants are apparently quite specific about their gear and chances are slim that any component offered by Pinkbike would appeal to a large subset of its viewers. Socrates went a bit clickity happy which caused his computer to collapse under the heavy burden of spyware. To add to the drama, he felt incredibly lonely being the only one in the world with access to the world wide web and no one ever liked his tweets. This is why he eventually ditched the computer and went with pen and paper instead. Kind of a bummer because I would have liked to use that one to compute square roots." - Pythagoras.

Dropthedebt (Dec 10, 2018 at 16:57)
@florinbmx:
Go to the contest page and on the Advent calendar click the link to see winner.
It says @cjewell for 2nd & 4th. Congrats on whatever you get @cjewell.

santoman (Dec 10, 2018 at 23:44)
Either there is some bug in the selection system or @cjewell just used up all their luck for the next 10 years in the PB advent calendar!

cy6ex (Dec 11, 2018 at 6:25)
Is it just me or Camelbak is not worth the price. The material choice is just terrible IMO. The ones i bought back early in the millinimum are not too bad but after those, they just stained up and looks like crap real fast. Would not buy them again.

pinnityafairy (Dec 12, 2018 at 6:47)
I've been using their equipment for around twenty years and their customer service has always been great to me. If you have an issue with a bag give them a call on the phone and send him some pictures more than likely they will straighten you out.

nzmichael (Dec 10, 2018 at 2:25)
Haven't clicked anything yet, if I need something for my bike I'll go out and get it. It's great when kids stuff is offered, love the idea of gifting those to my children, nephews or nieces.

pinnityafairy (Dec 10, 2018 at 9:11)
What I love best about you water bottle boys is how when you drop them in the woods and they fall out of your holder you keep right on riding and ignore it. Trashy Bottle Boys. I have yet seen a fellow Rider drop his hydration pack and leave it in the woods. I've seen thousands of water bottles laying in the woods over my days of Riding Trail.

vinay (Dec 11, 2018 at 3:51)
@stinkbikelies: Bottles littering the trails were actually my main reason to dislike them. I actually don't believe people don't notice at some point that they've lost their bottle. They're just too lazy to go back up there to fetch it.

pinnityafairy (Dec 12, 2018 at 6:44)
@vinay: the point is it's easier to make an excuse most times than turn around stop your Strava and pick your water bottle up. I guess that's why I cannot go on a ride on my local Trail without seeing multiple water bottles laying off to the side of the trail. Because everyone has an excuse. Just wear your hydration bag and then you can pack out lazy mf's trash

vinay (Dec 12, 2018 at 12:17)
@stinkbikelies: Oh yeah, I wasn't calling these excuses. To me those are just plain lies. Sure I can believe people lose their bicycle computers (which I dislike for the very same reason) and really can't find them anymore. But a bottle. If they're in such clear sight for me riding these descends at full speed then they should be easy to spot for someone actually searching for them.

I was always surprised to see here on Pinkbike how people complain about (punctured) tubes being tied to trees and no one was bothered by lost bottles littering the trails. I've never seen a littered tube over here (because people actually take them home to patch and reuse them) but bottles are an issue no one ever seems to mention.

pinnityafairy (Dec 17, 2018 at 14:00)
@vinay: all good at the end of the day we all love mountain bikes. I'll just stick with water's for the week and Shred without any. The only time I pack anything is on a back Country tour or an Enduro that strung out far from the parking lot.

pinnityafairy (Dec 17, 2018 at 14:02)
@bennorth: so when you get thirsty and reach down for your bottle you do not notice it's gone. Great story bro turn around and go get it now