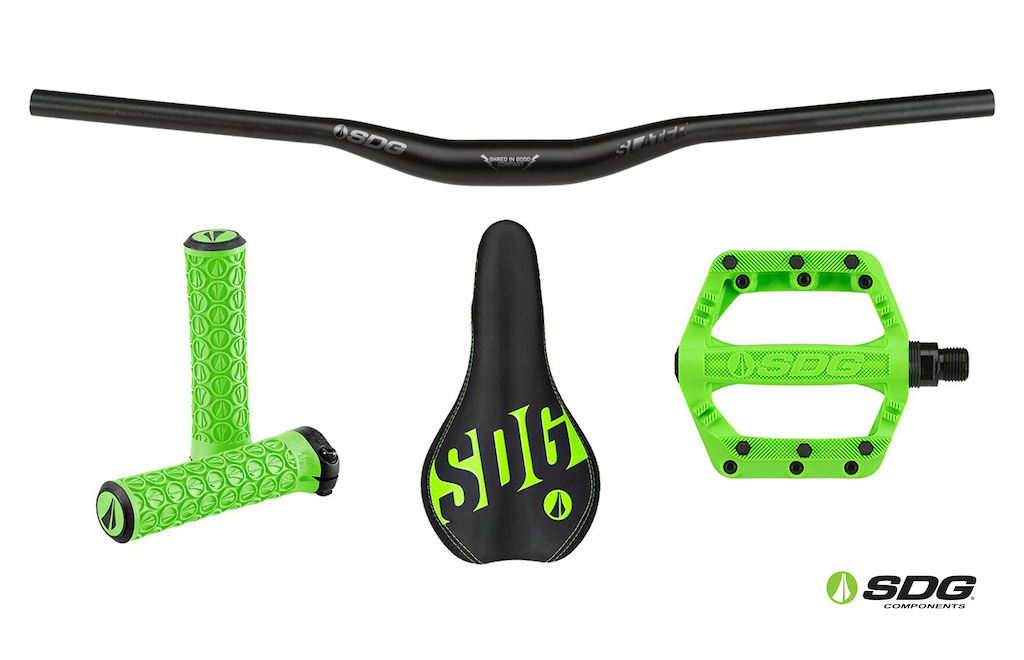 CLICK HERE TO VISIT THE ADVENT CALENDAR CONTEST
There will be new prizes revealed every day in the lead up to Dec 25th so check the Advent Calendar daily on the front page of Pinkbike and make sure you enter for a chance to win.

Winners will be notified via the email associated with their Pinkbike account within 48 hours of their name being drawn.
Happy Holidays!
MENTIONS: @SDG-Components


Posted In:
Other SDG Sponsored

gooutsidetoday (Dec 19, 2018 at 3:27)
My oldest (just hit 4) just graduated from his balance bike to a pedal bike. I should have did it sooner, he was pedaling by himself within 5 minutes of getting his new Trek Precaliber. Don't think I've grinned that big in a very long time. Teaching your little ones to ride a bike is one of my favorite experiences as a parent so far.

gooutsidetoday (Dec 19, 2018 at 7:13)
@meandros: the kit is awesome but I am mainly just telling people that if they haven't already, put your kids on a bike! Or your nieces, nephews, grand kids, whatever..

meandros (Dec 19, 2018 at 15:51)
@gooutsidetoday: especially when they have all the equipment and trail systems available. I mean, biking thru a crowded street city is not for the faint of heart. other than that, put'em kids on bikes and make sure you ride with them to show them what it's really like and make them assess risk and take no chances on nobody and nothing: biking is always most fun when control>risk, I mean, we ain't getting paid by no-one for doing and luvin this stuff

vinay (Dec 19, 2018 at 0:29)
There is little in this years Giveaway that I was interested in (except for the Stans wheelset) simply because I'm already happy with what I have and because I'm on old standards stuff. But I do see my kids struggle on the mtb I got for them, so it is amazing to see Spank step up and develop something that suits their ergonomics. I'd love to win this one but more even, I'm glad knowing that soon there will another kid somewhere even more stoked on riding bikes

Kramz (Dec 19, 2018 at 1:08)
First ride with my father, I fell on small gravel around a turn, and got major road rash. I always think about how rosy the past was, but in reality I think I just make it rosy. That's like the least rosy thing that's ever happened to me.

vinay (Dec 19, 2018 at 1:34)
@Kramz: First time I took my oldest daughter out on a mtb ride. I had got a sweet 20" mtb from Ghost with suspension fork, V-brakes and all that. I had tuned everything as well as I could but you can only set the brake levers so close to the bars and still have some stroke left to actually apply them. I was coaching her on a level section of trail but at the end of it she had to stop because there was a descend with some roots and holes. Unfortunately her reflex was to backpedal (because that is how the brake on her regular bike works) and she couldn't reach the lever in a hurry as she already had to hold on whilst rolling down the hill. She made it quite far but washed out in a turn and fractured her thumb. My girlfriend wasn't amused though my daughter still was excited and grabbed my mountainbike magazines as soon as we got home. Unfortunately I broke my collarbone before she her thumb was healed so it was another good while before we rode mountainbikes together again.

Actually my first few rides on a mountainbike were also all crashes. Because I was told "if you want to get good, you need to get used to being clipped in" so that's what I did but still wanted to ride all the steep stuff. I quit riding clipped in about fifteen years ago and all is good. But I digress. My point was that riding mountainbikes is so much fun, it kind of covers up the minor (or bigger) mishaps. Though obviously getting rid of some of these mishaps makes it even better. I think these bar and grips are really welcome. They finally allow you to set the brake levers so that kids can actually operate them and still hold on to the bar properly. If I don't win them, I'm going to buy them.

Gassymagee (Dec 19, 2018 at 2:10)
Definitely keeping those bars for my commuter. My current 760mm bars make me too big of a target for cars and pedestrians

SDG-COMPONENTS Plus (Dec 19, 2018 at 6:10)
We just received the individual components into our USA warehouse yesterday, so most retailers will start to see them shortly. Our Swiss distributor TST won't be receiving until well into the new year so your best bet is to check the European retailers as they'll be sure to get them in asap.

p0zi (Dec 19, 2018 at 11:04)
@SDG-COMPONENTS: Thanks for putting these components out SDG! Giving a custom-build 24" Gromhit to my son this Christmas and it was a struggle to find some parts. Stealing the SDG saddle from his current 20" Norco but will get one of these kits when available in 2019.

scratchbum (Dec 19, 2018 at 6:38)
Awesome! Would love this for my little one. Trying to inspire him to follow in my tyre tracks, but he loves football. This could make a big difference!