Winter Biking in the Scottish Highlands 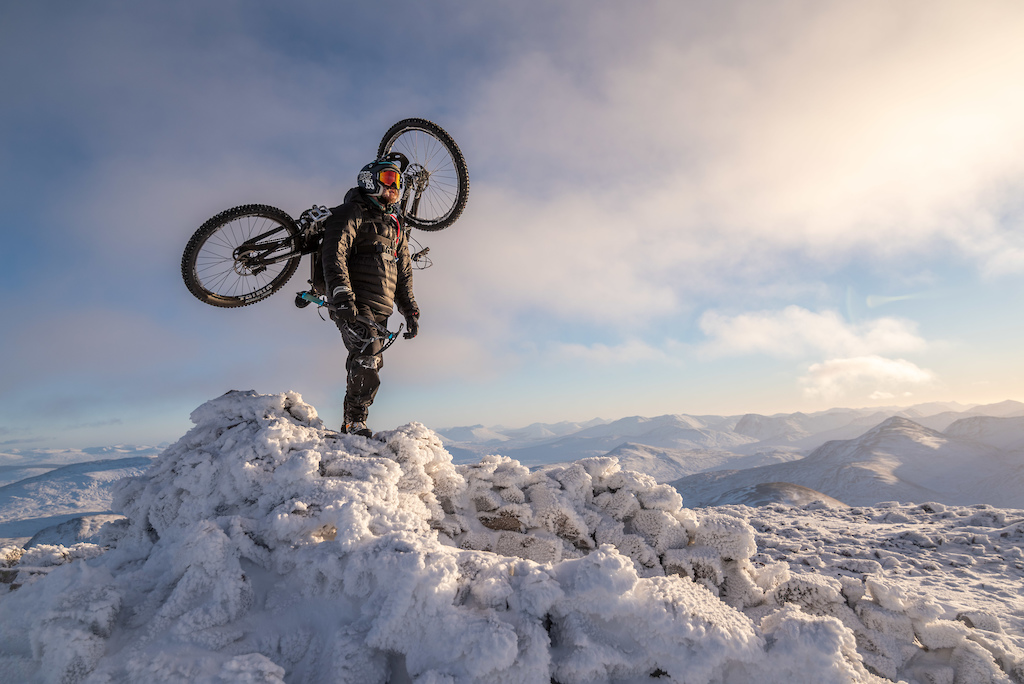 My winter trip with Sean of Grizzly Munro Diaries was all booked up and ready to go, the week before I had been keeping my eye on the weather and conditions, hoping for a bit of snow and ice, but not too much. To help with traction Sean had modified his MSC tyres as well as a set of 29ers for myself, adding some screws for grip on the ice.

The forecast was for snow, and with a lot of the white stuff falling around Yorkshire as I loaded the van, I decided to leave the bike at home, thinking it would only slow me down on top of a full camera bag and gear for winter Scottish mountaineering. I'd arranged to meet Sean in Spean Bridge early Saturday morning, but with Scotland under a winter blanket, I headed up Friday morning to make the most of the conditions. As I would be heading through Glencoe, I set my compass for that stunning part of Britain, getting in as much research on locations as I could the night before.

Despite the snowfall over The Pennines, the drive up wasn't too bad and I was soon heading over Rannoch Moor, excited to meet up with my old friend, The Buckle. I have a lot of history with this magnificent hill, I'll never forget the first time I saw her looming out of the clouds on my first hiking trip to the Highlands, my walking buddy and I HAD to climb it after we'd conquered The Ben. On another winter climbing trip, I fell on Curved Ridge, breaking my ankle, making the long walk back to the van painful, to say the least. But she's always there to greet you into the Highlands after the loneliness of Rannoch Moor.

Parking up in the lay-by where the West Highland Way meets the road, the outside temperature read -6C, so I stuffed an extra down jacket in the pack, a bothy bag and headed out towards Beinn a Chrulaiste. I took the WHW towards the Kings House, where just past the small wooded outcrop lies the path up the hill, snow was low in the glen, making it tough going from the start. As the path steepened I pulled out my ice axe and headed into the cloud. 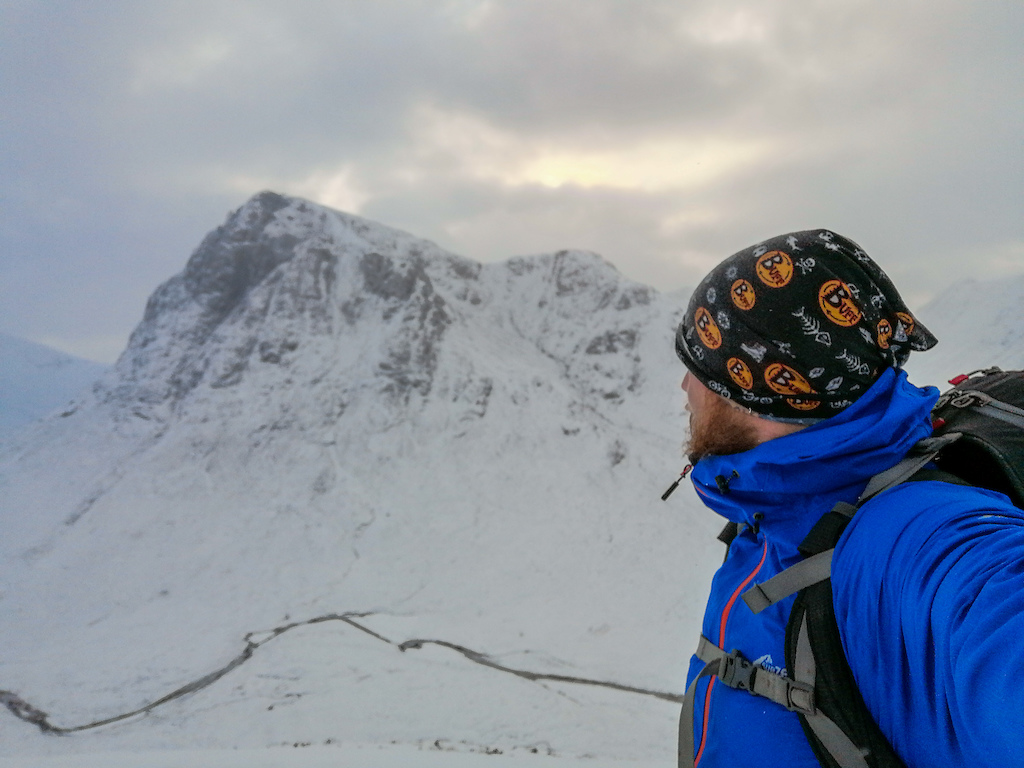 Small breaks in the cloud allowed me to scope out some compositions, finding one that looked down all of Glencoe, I set up the camera, slipped on the extra jacket, got under the shelter and waited out an incoming blizzard. 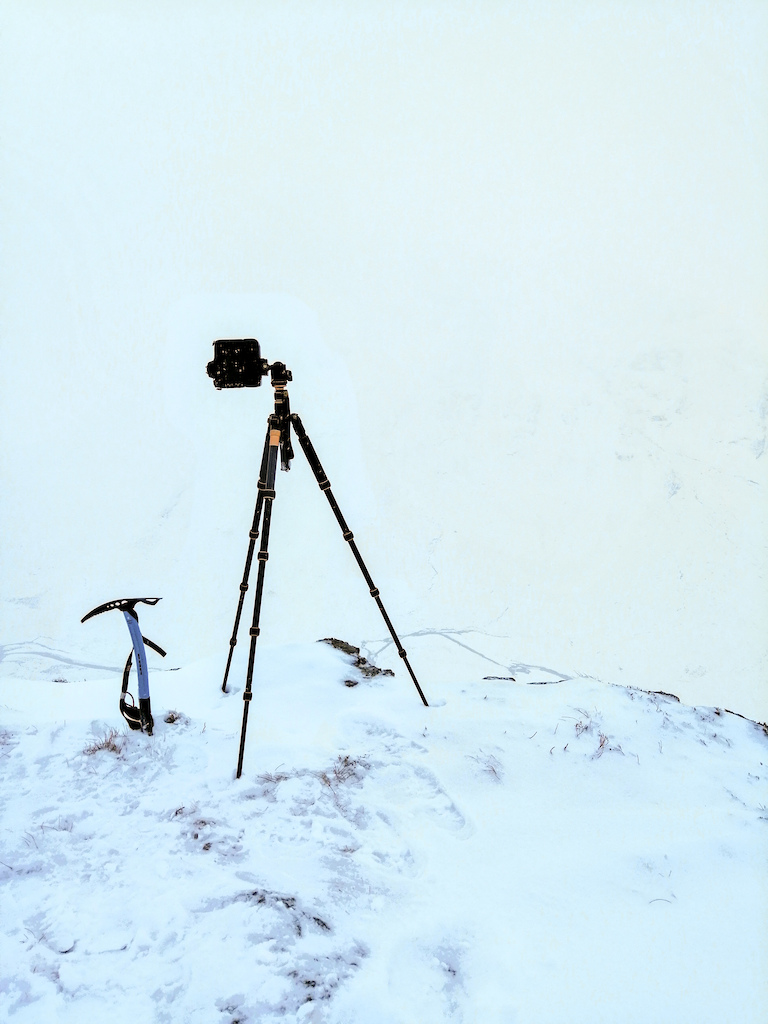 The brief snow shower passed and the cloud lifted for a short period, allowing me an opportunity for a photo. I was all set up and ready, with the Nikon D750 and Tokina 16-28mm. even at 16mm it wasn't wide enough to get the whole valley and I wanted to use the road to lead the eye through the image and through the glen. So I turned the camera to portrait orientation, set the lens to 26mm and took a series of shots from left to right, blending them together in Photoshop to create one panoramic image. 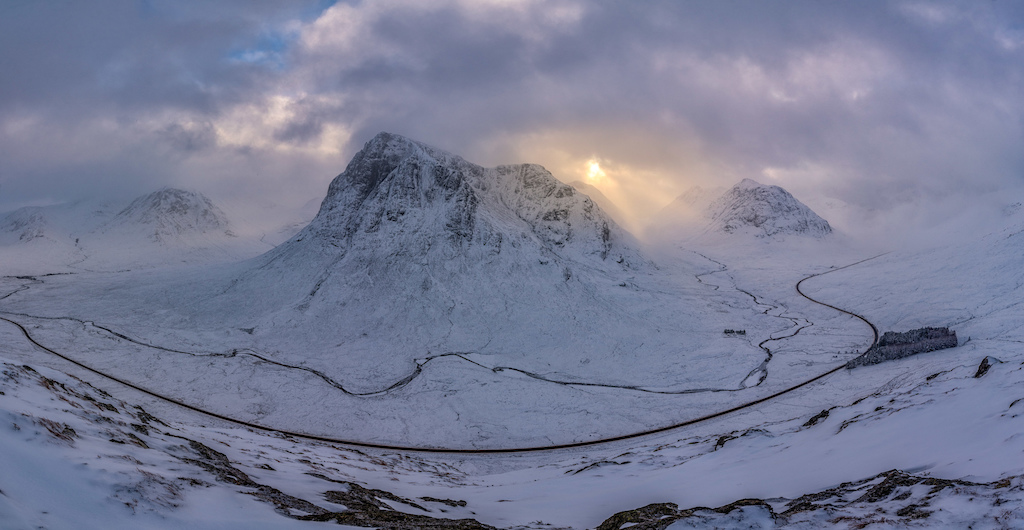 With fading light I packed up and headed back down, popping in the Clachaig Inn to warm up by the fire and enjoy a couple of beers. After an early night it was just a short drive to Spean Bridge, where Sean was arriving around 7am. Black Betty pulled in to the Commando Memorial Car Park. when I was boiling water for the flask. Sean checked the weather apps from the warmth of the truck, while I chucked my gear in the back making use of the 4X4 on the snowy roads. 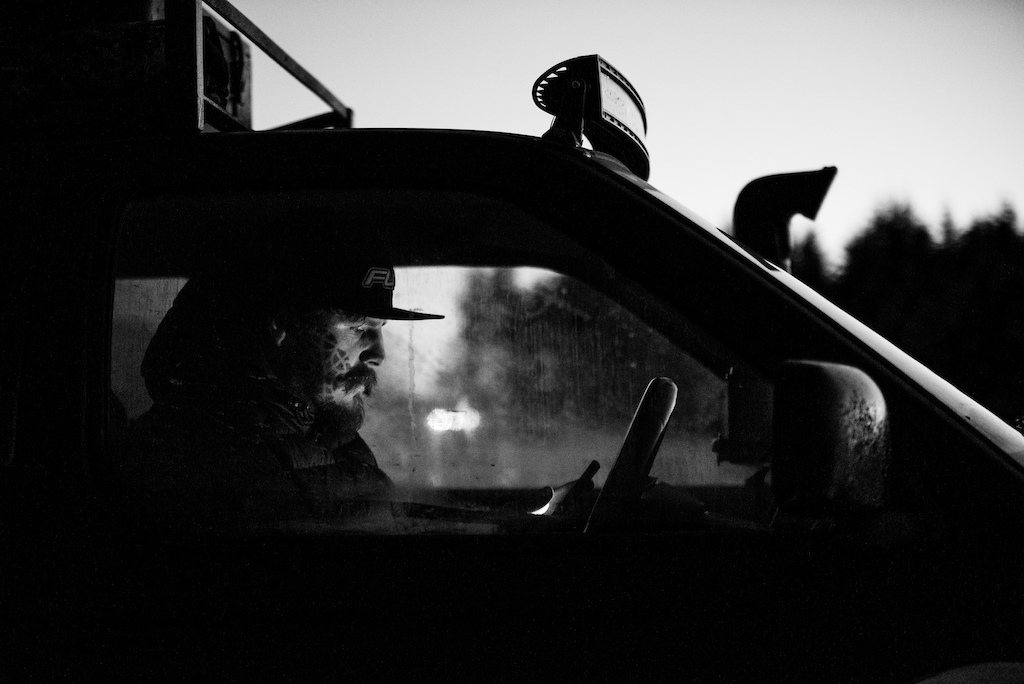 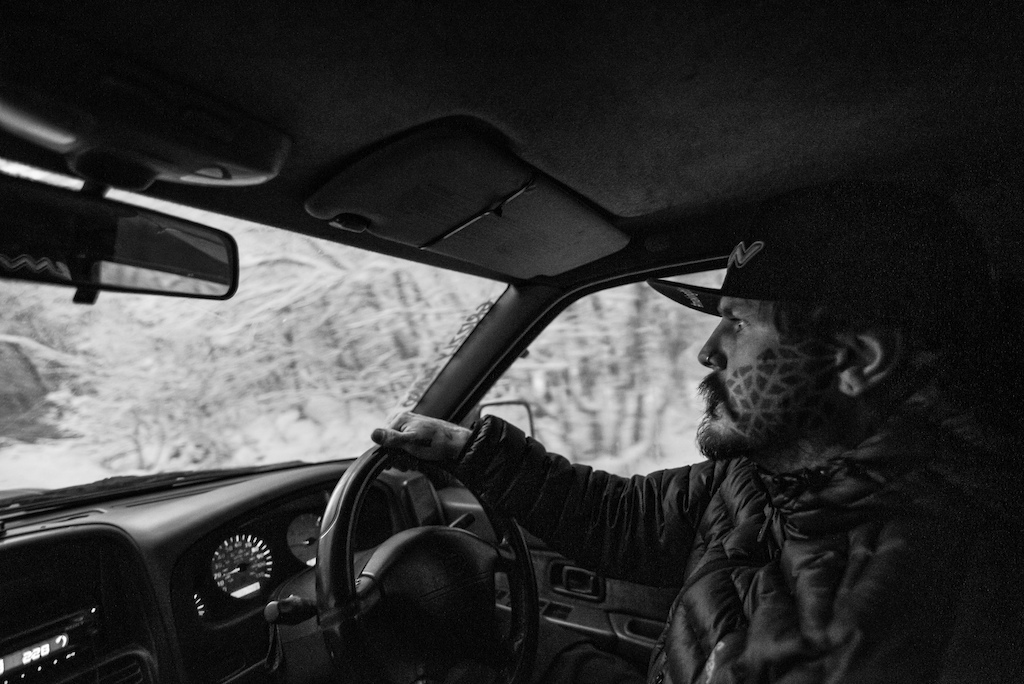 We'd settled on Stob Choire Claurigh on The Grey Corries for a number of reasons, but mainly for the dirt track access road. Sean thought it would be an ideal spot to get some photos of the truck in its element. So while he drove along the snowy track, I ran around, laying down in the snow for low angles. 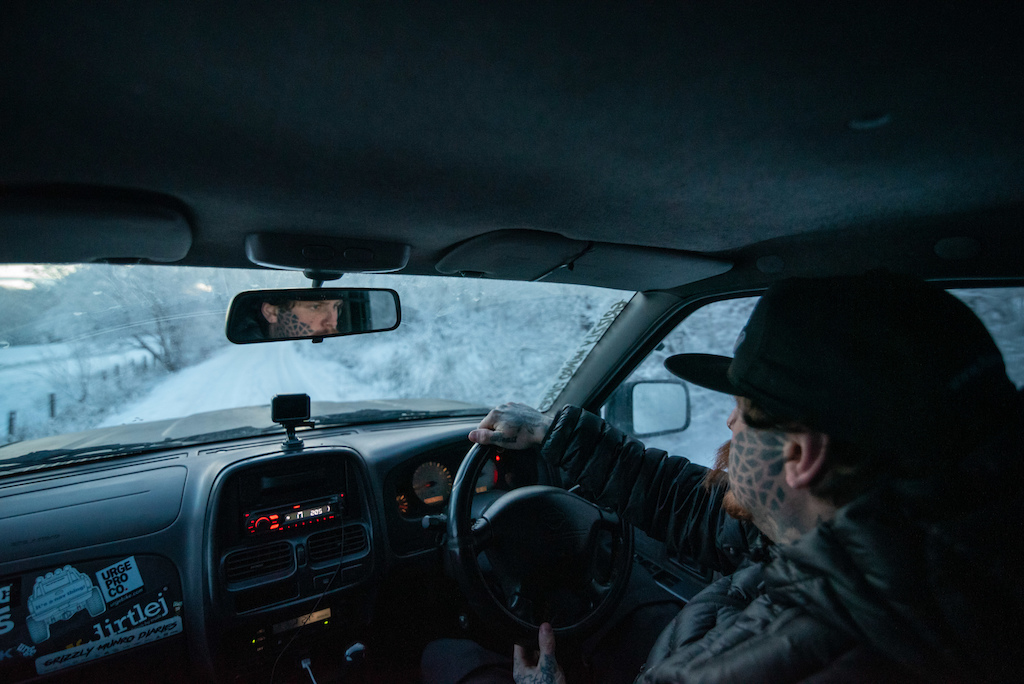 I went over my gear one last time, while Sean checked over the bike and packed up some lunch. 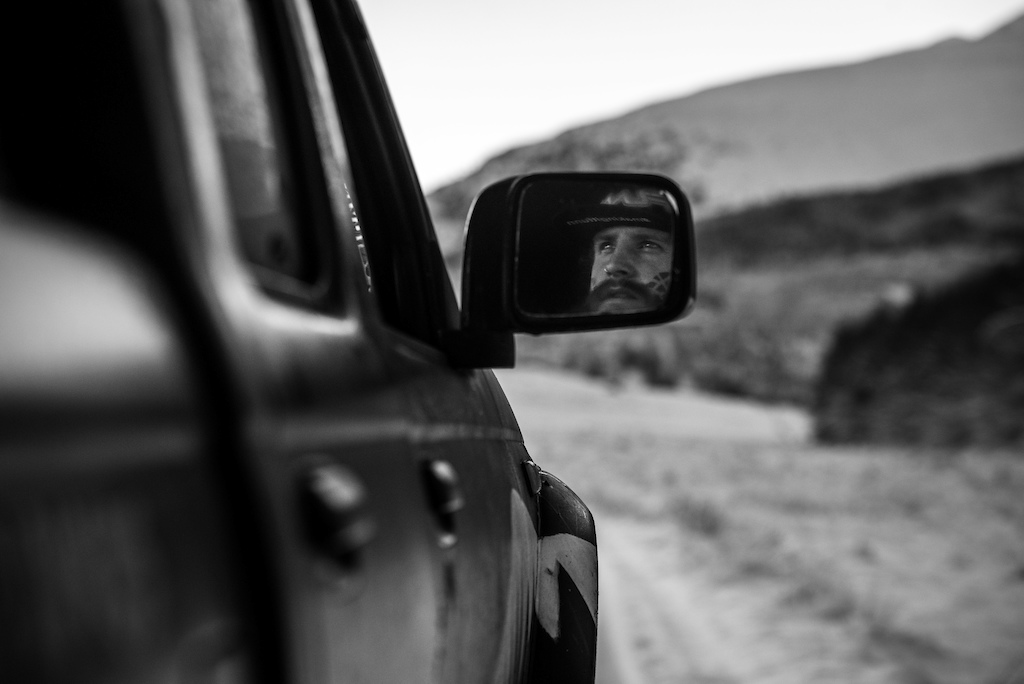 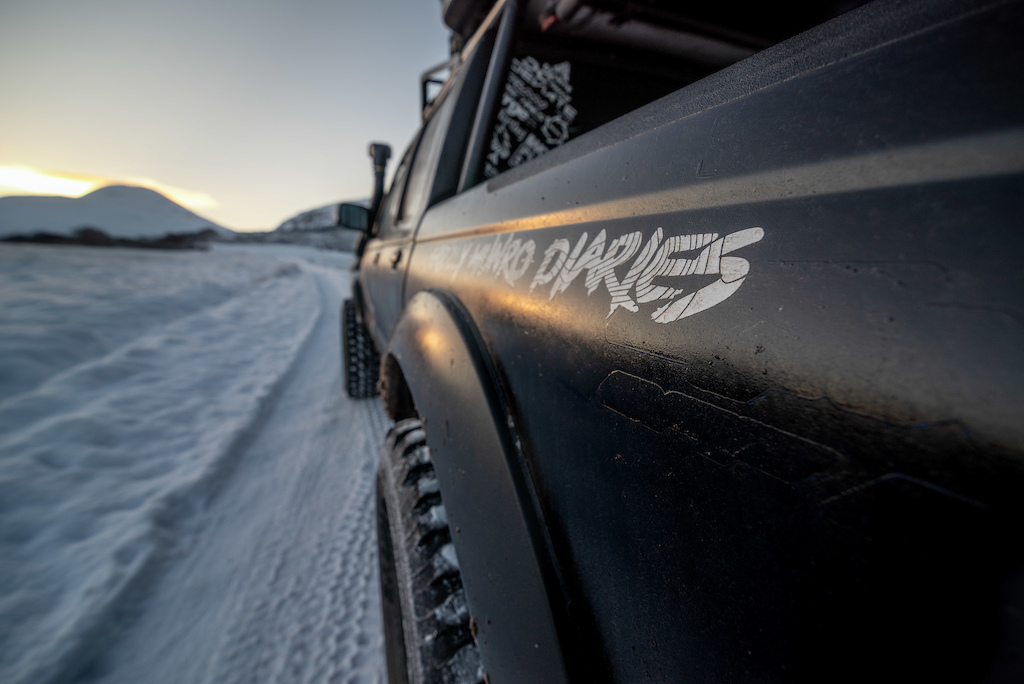 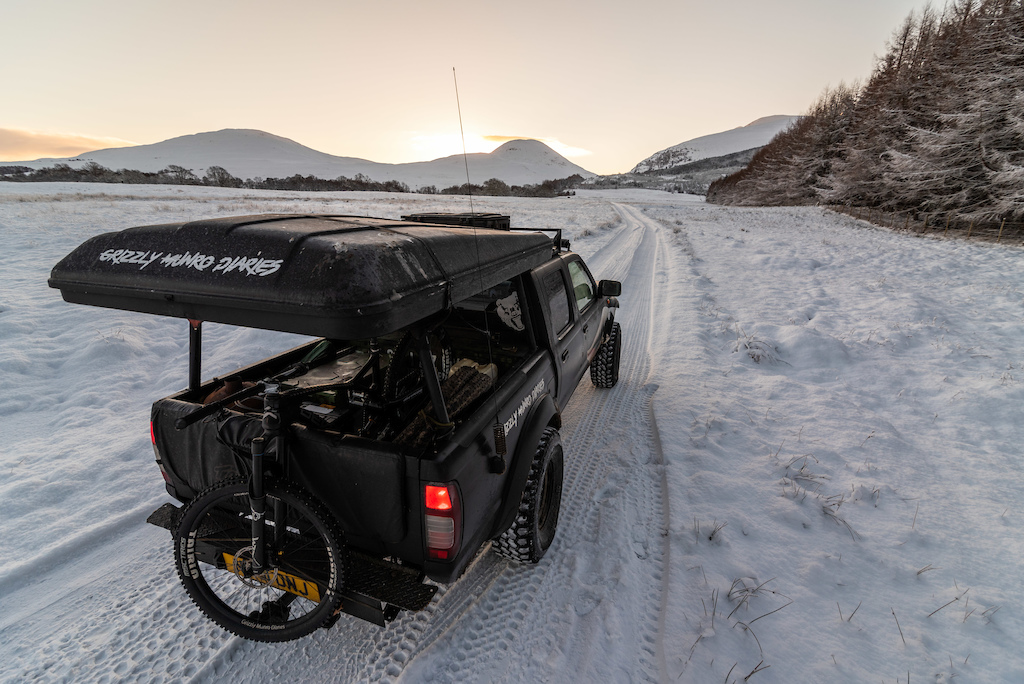 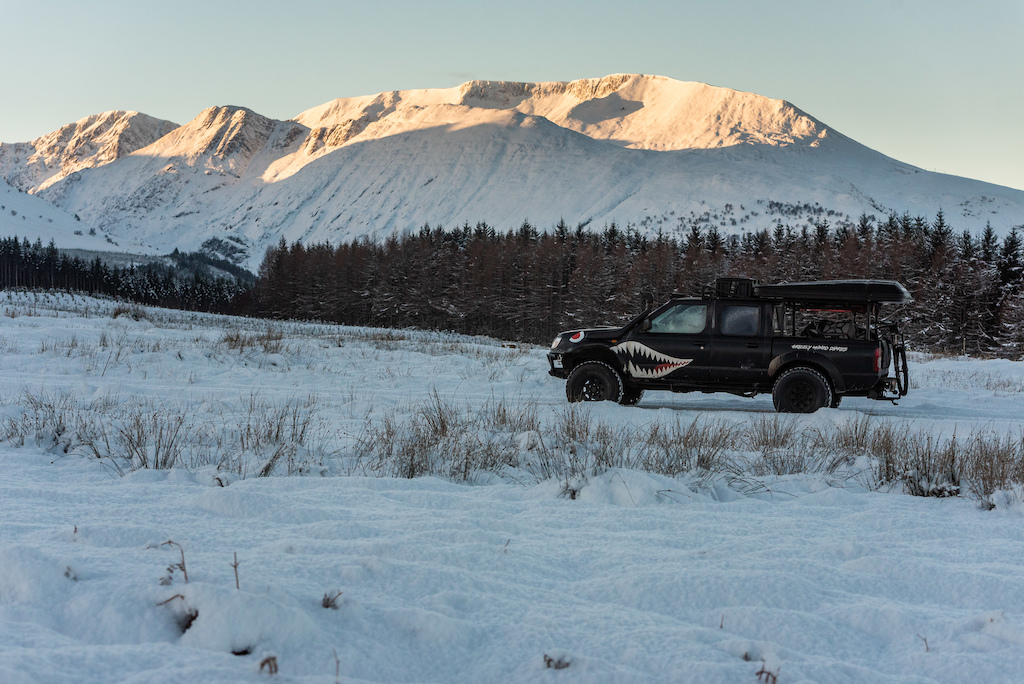 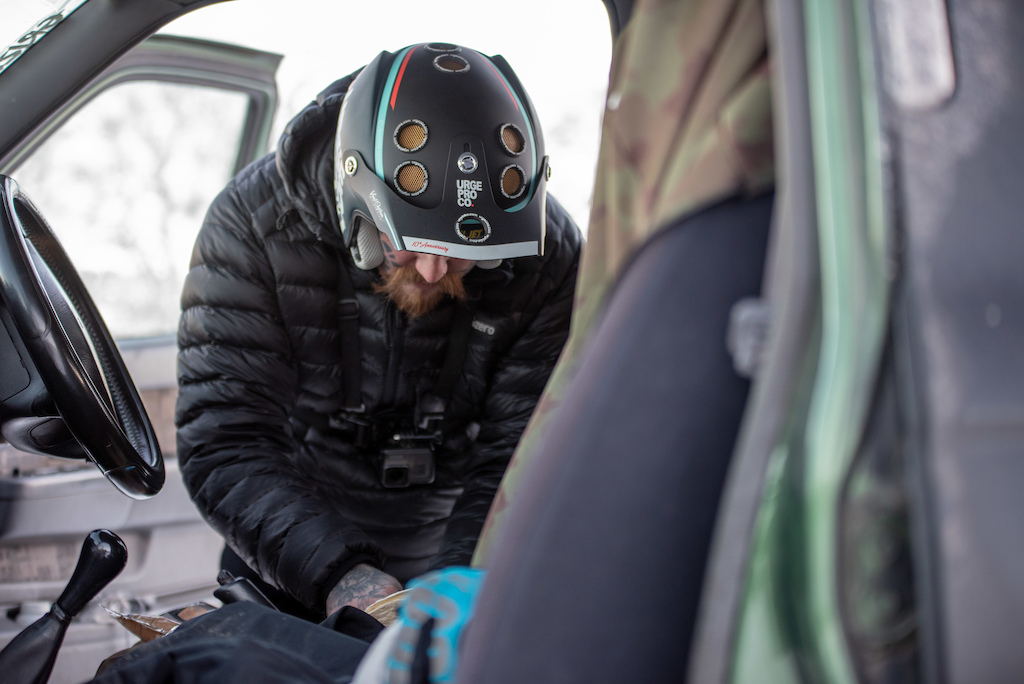 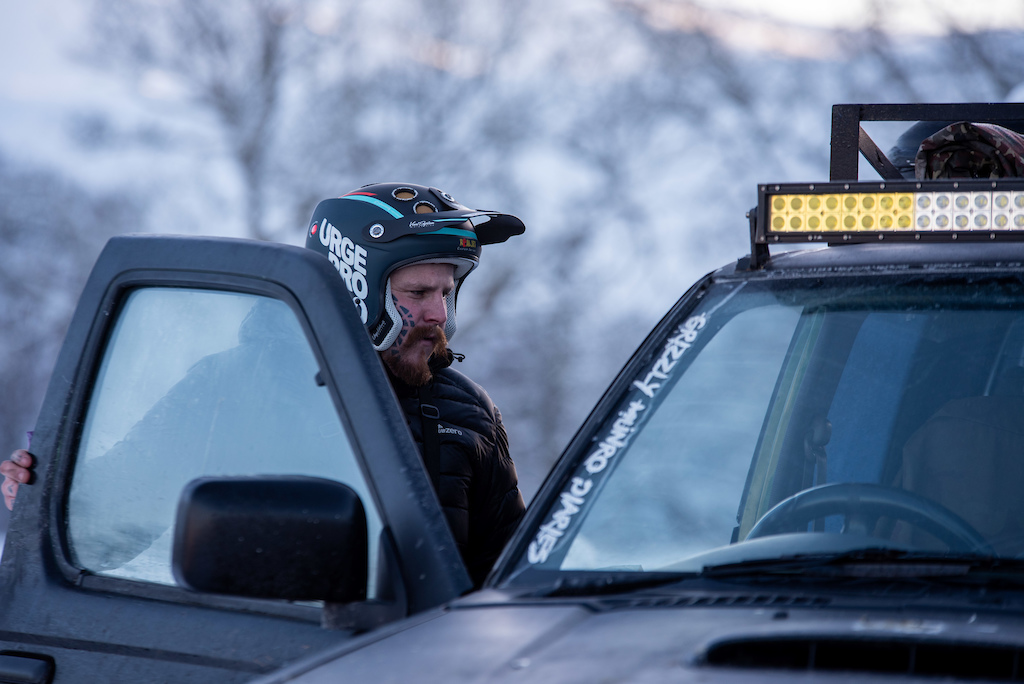 We set off, as the sun peaked over the top of the hills we were aiming towards. I struggled to keep up with Sean for a short while, as his ice spikes dug into the hard snow and ice giving him plenty of grip, until it got too steep and he was out of the saddle and pushing next to me, 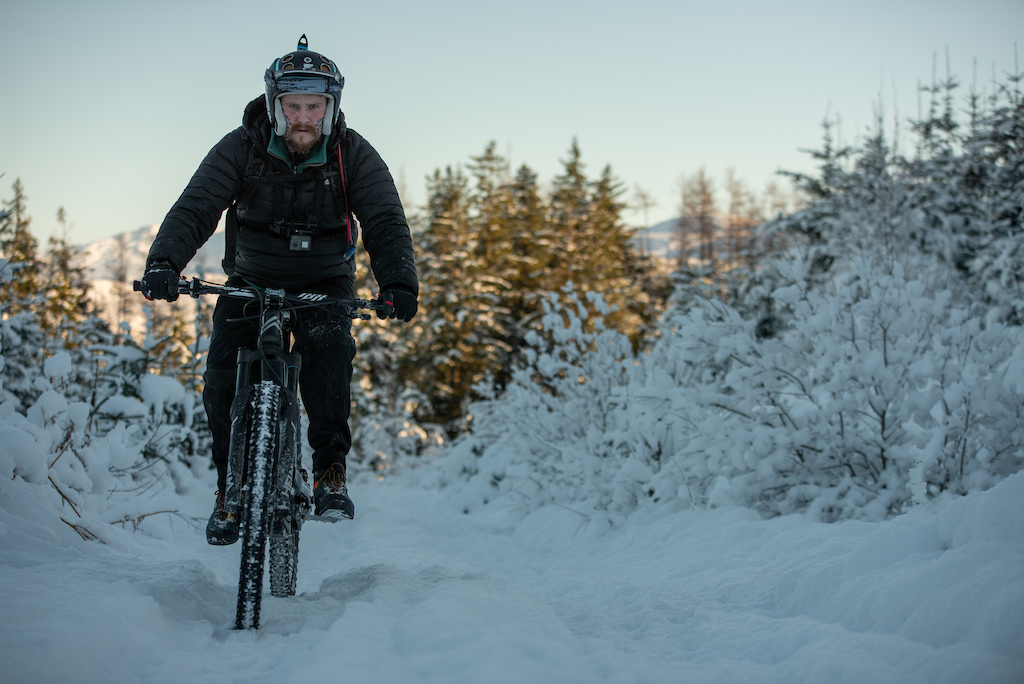 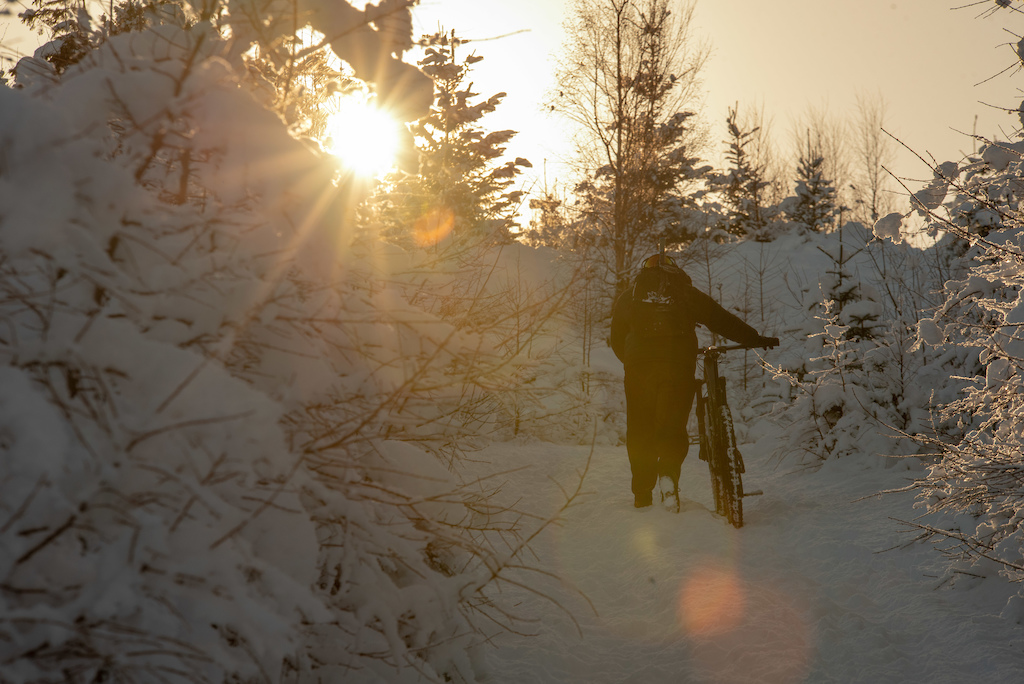 The early morning light hit the trees as we entered the forest of snow-covered pines.

Once out of the trees, we got off the good track and headed up on to the ridge. Things soon started to get steep and Sean went from pushing to carrying, slotting his Deviate in to his Hook-a-bike for most of the climb up. The Hook-a-bike is a great product, that attaches to your riding pack, allowing you to safely and securely carry your bike hands free. The snow was fresh and waist deep in places, making it hard going, especially with all the weight on our backs, Sean a bike and my camera gear. 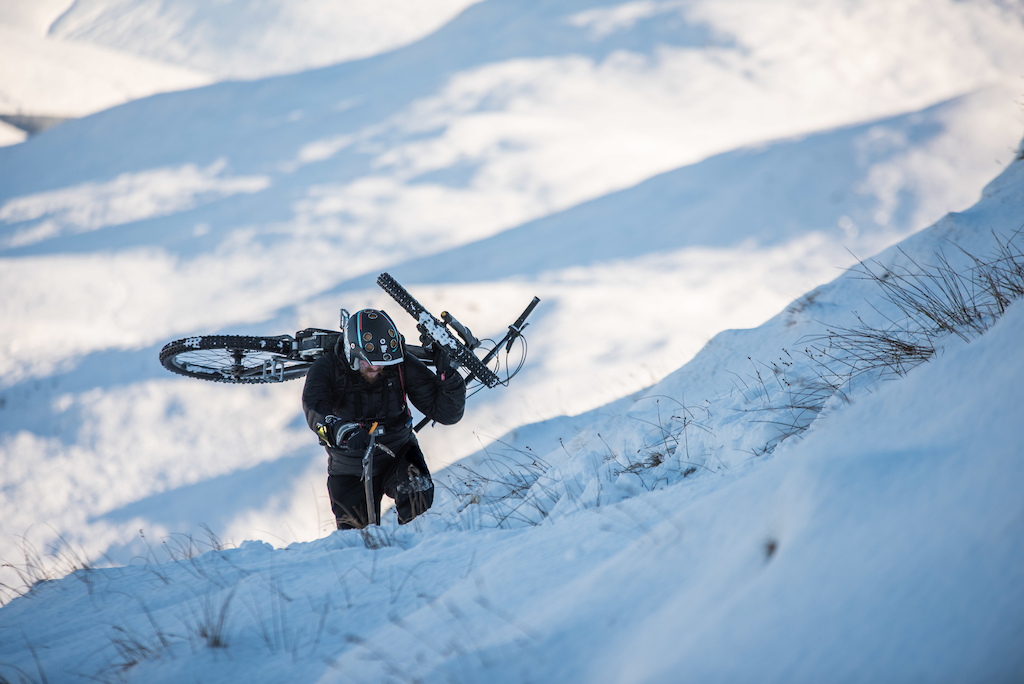 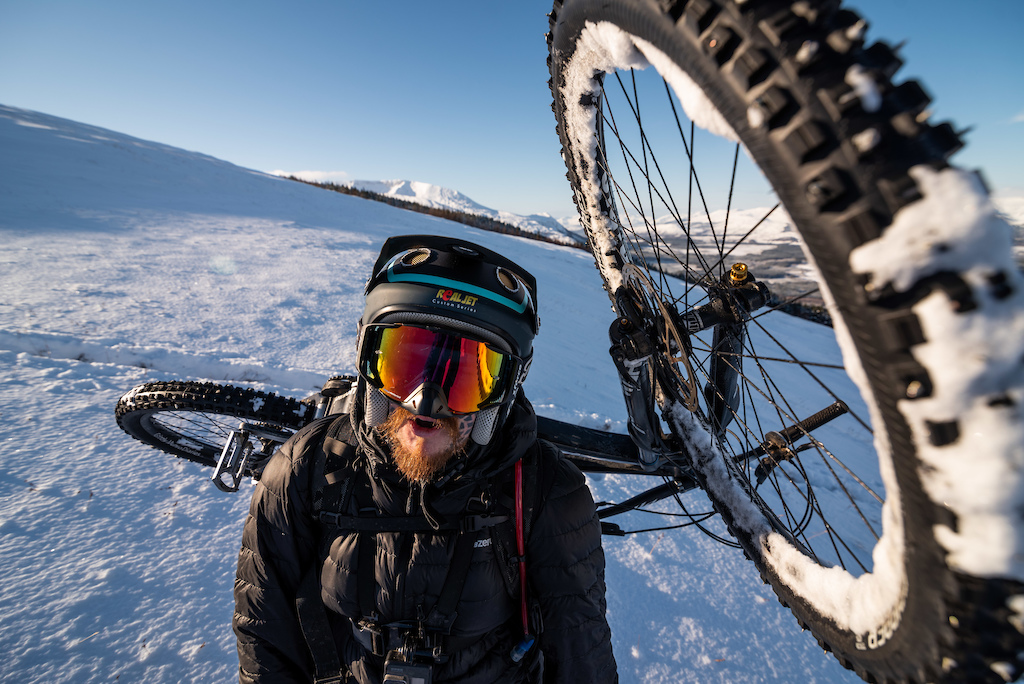 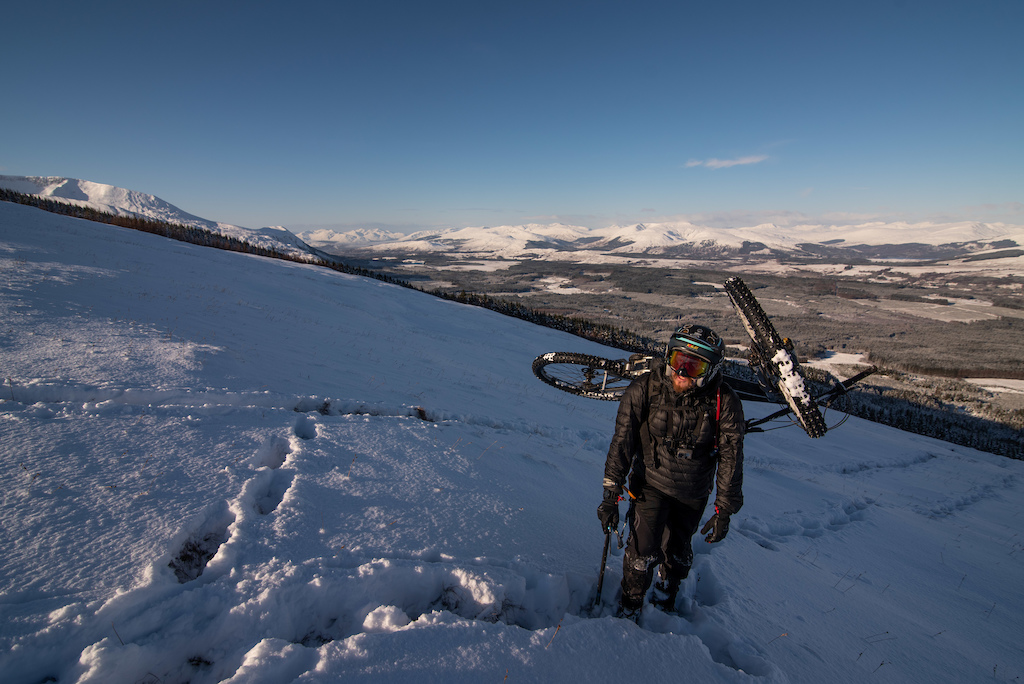 We carried on up and with the amazing winter light, taking lots of pictures, making the most of our surroundings. 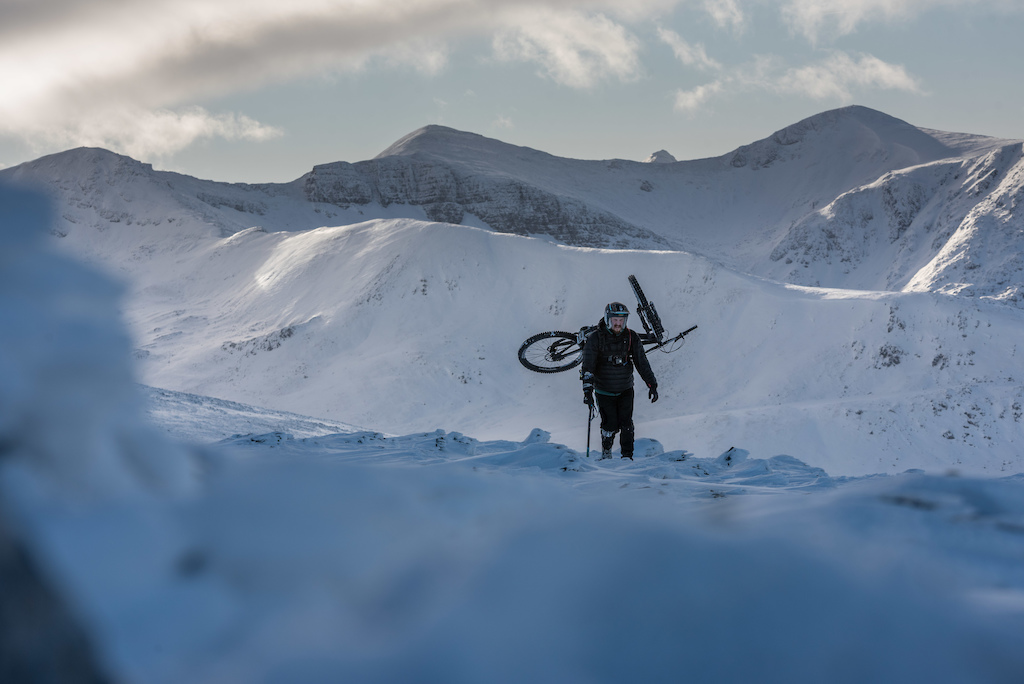 A short tricky section along the summit arete and we were stood on top of the Munro, with 360 degree views around us. 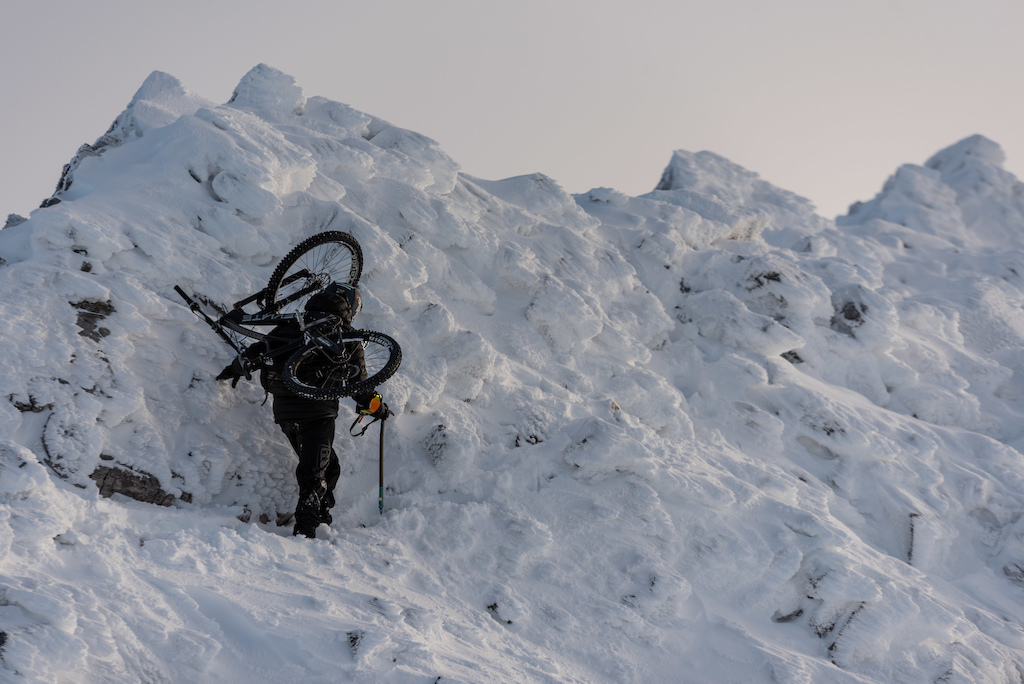 As the sun started to drop behind Ben Nevis, we got some obligatory summit shots, before the descent back down. 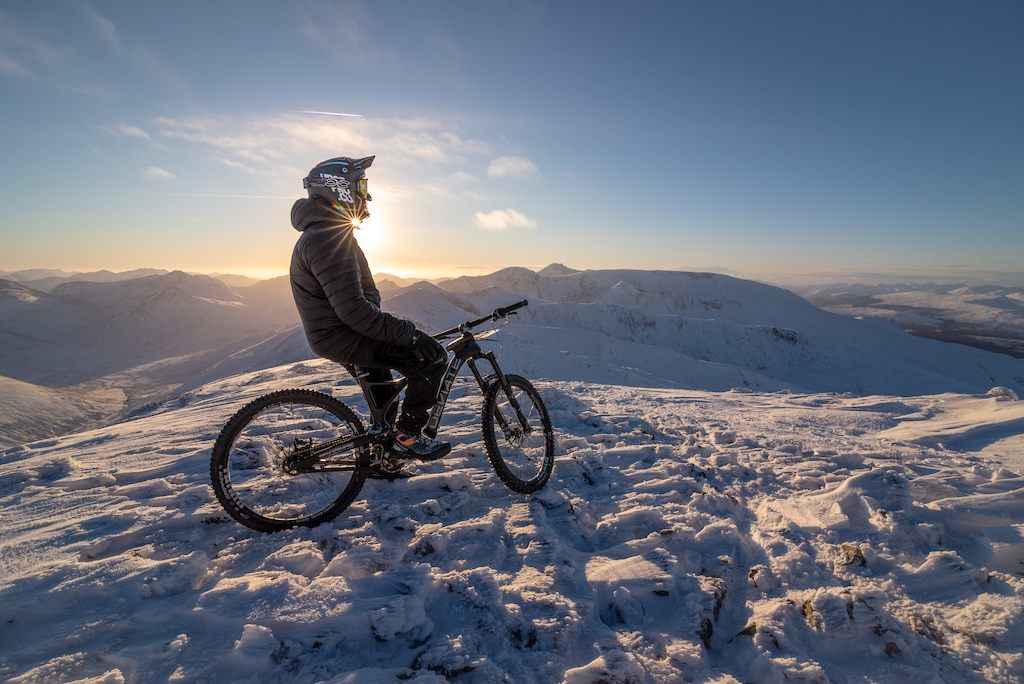 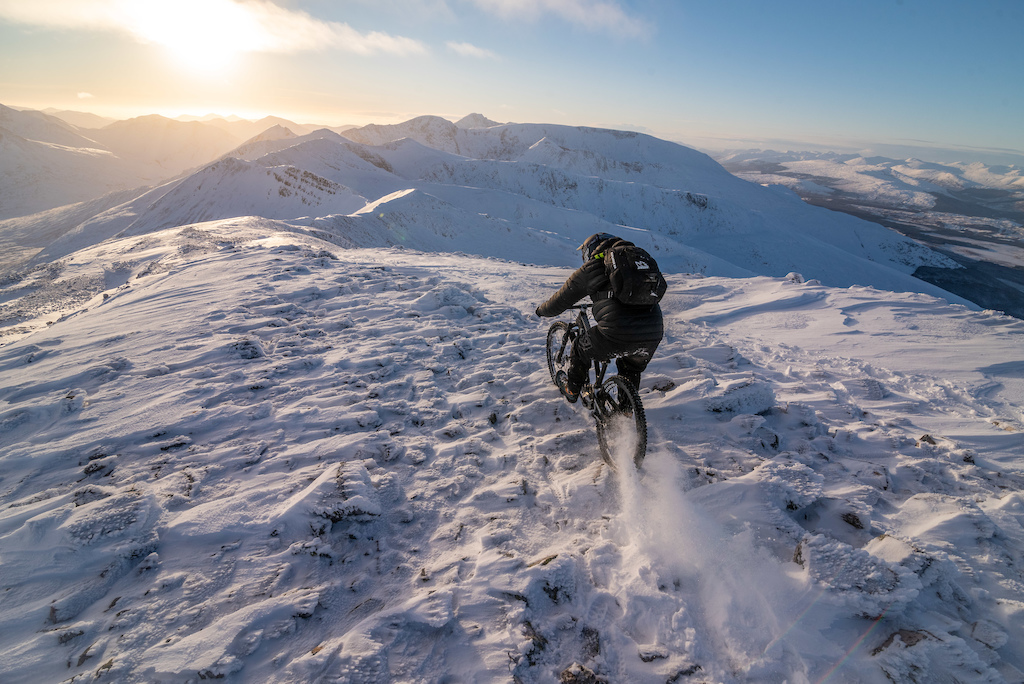 In between the deep snow and rocky ridges, Sean squeezed in as much riding as he could, while I slid along behind him, trying my best to keep up and stopping him on interesting sections of trail, or I should say ski slope, for some action shots. 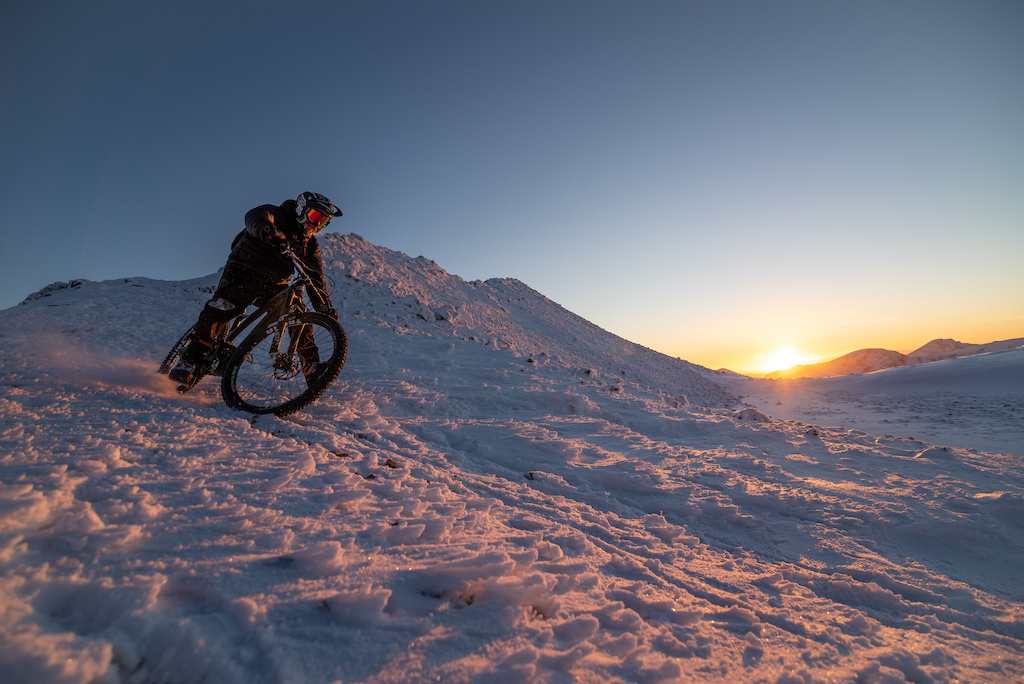 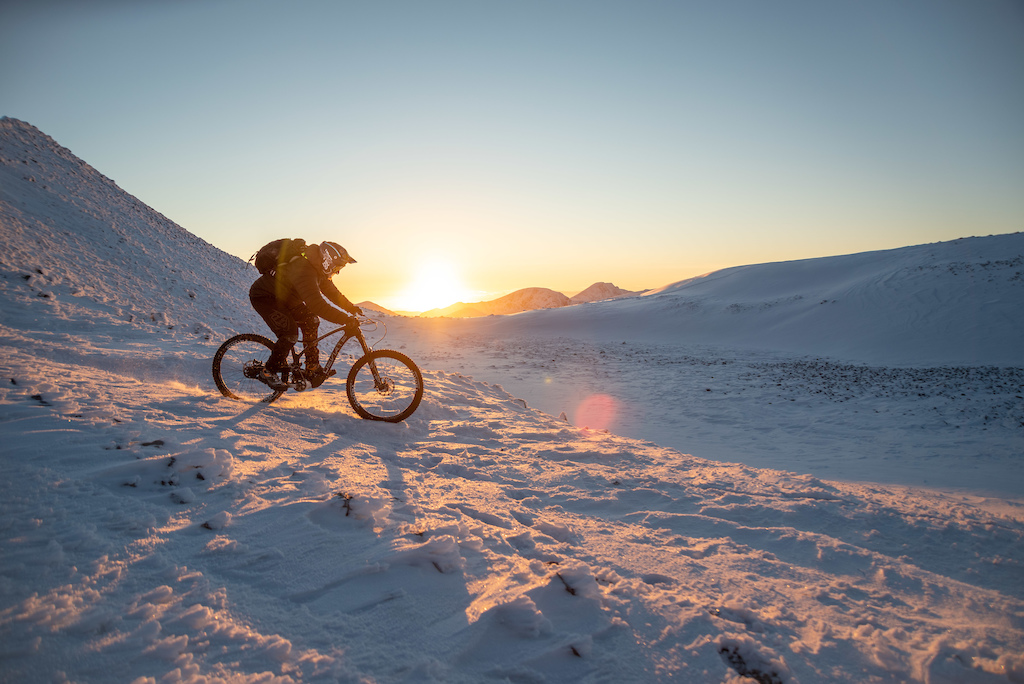 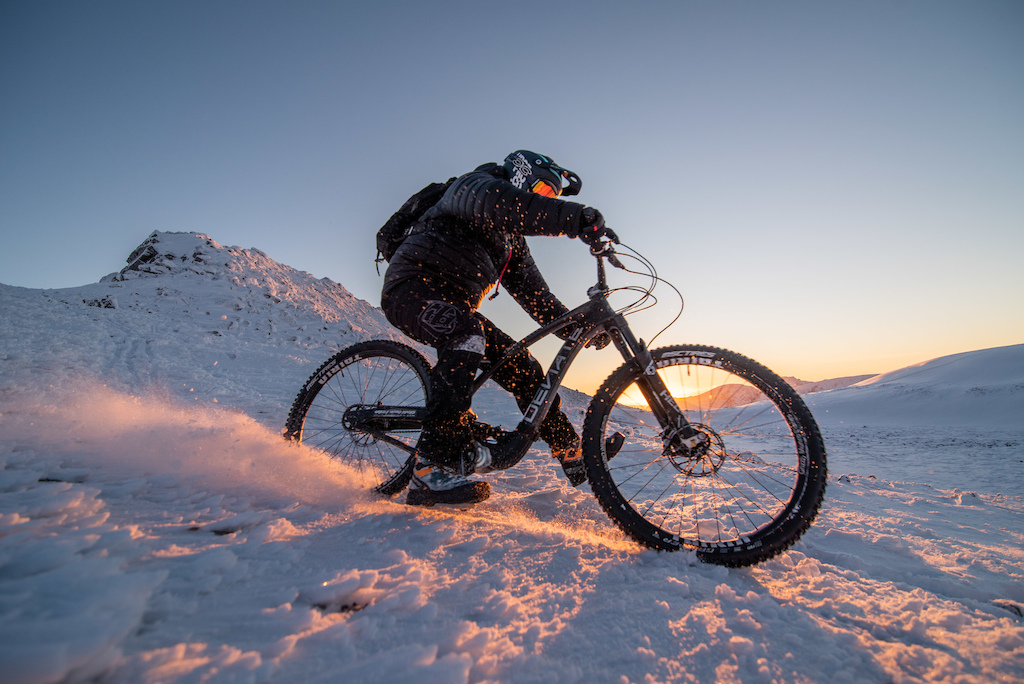 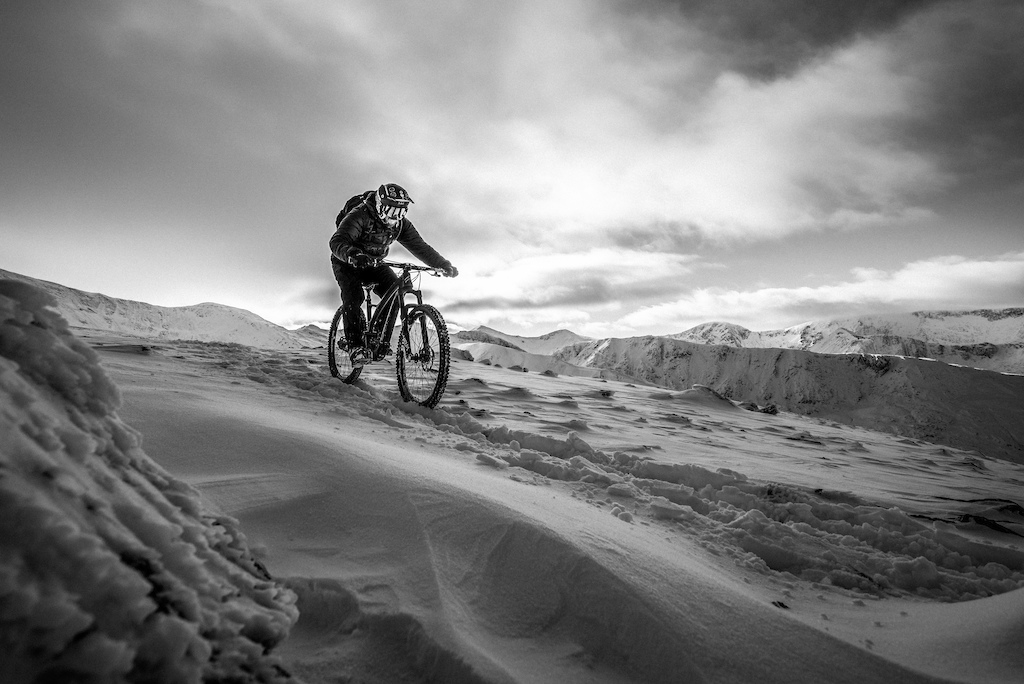 Once back down to the treeline and relative safety, Sean went on ahead down the good track to the truck to get Black Betty warmed up, while in fading light I slipped on my headtorch and ploughed through the deep snow. During the short trip back to my van, we chose on the Nevis Range car park to spend the night. We knew the snow would have been cleared and we could find a quiet spot to warm up by the fire and reminisce about the day over a few well-earned beers. 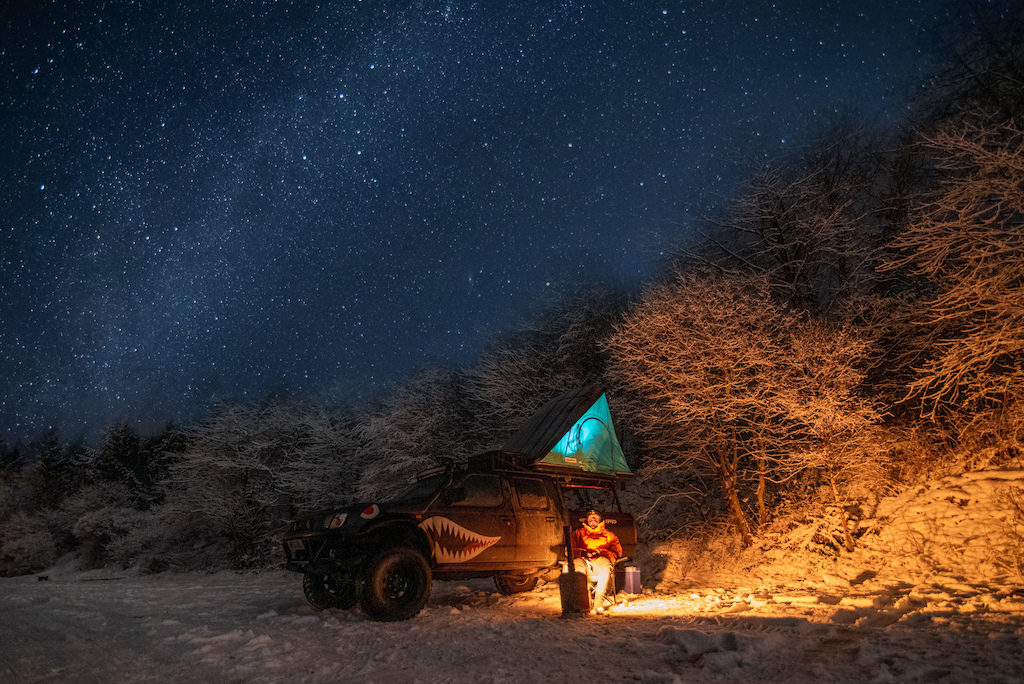 Pablocjusz (Mar 18, 2019 at 13:32)
@alcphotosleeds: Amazing photos and sick winter biking!
I'm pretty sure that I saw you last year at the end of June on my way to Steall Falls.
Not hard to notice Deviate bike and that sweet ride on car park

alcphotosleeds (May 29, 2019 at 3:28)
@Pablocjusz: Only just seen this now mate, but yeah you probably did. That was the first time out with Sean, we were both on Deviates.
www.pinkbike.com/news/grizzly-munro-diaries-mamores.html

LenzLenz (Mar 17, 2019 at 12:34)
If you are curious how HOOKABIKE holds the bike on the Backpack:
pushcomponents.com

TheLongMan (Mar 17, 2019 at 19:47)
What gloves do you use to ride in those conditions??? Sick adventure..usually I back off ideas like this because my hands would freeze and if I get really warm ones they are too big to feel the bars

This is something else entirely. lol

aljoburr (Mar 17, 2019 at 1:36)
Have not been in hills for a few years, can you still use a compass for accurate navigation, I know places in cairngorm's where bearings are off by as much as 20 degrees?

alcphotosleeds (Mar 20, 2019 at 15:35)
It's an informal nickname bud.
Below threshold threads are hidden

poah (Mar 17, 2019 at 5:15)
wouldn't catch me going up a mountain in those conditions. Several people have died in the last couple of weeks up Scottish mountains.

alcphotosleeds (Mar 17, 2019 at 8:12)
There is always risk when in any hills, it's about mitigating those risks with planning, knowledge and experience. We had glorious conditions, only problem we had was risk of avalanche, we kept to the ridge, away from avalanche prone areas.

alcphotosleeds (Mar 23, 2019 at 6:14)
@poah: I just don't get your point... There's a risk doing any mountain sport. As a mountaineer, mountain biker, climber, hiker and outdoor photographer, I'm fully aware of the news in the mountains. As I said above, we were prepared for most eventualities.
Wouldn't catch you in the hills in those conditions? We had glorious conditions, good snow, great visibility, we chose a good route and we cut the route short to get back down to the glen.