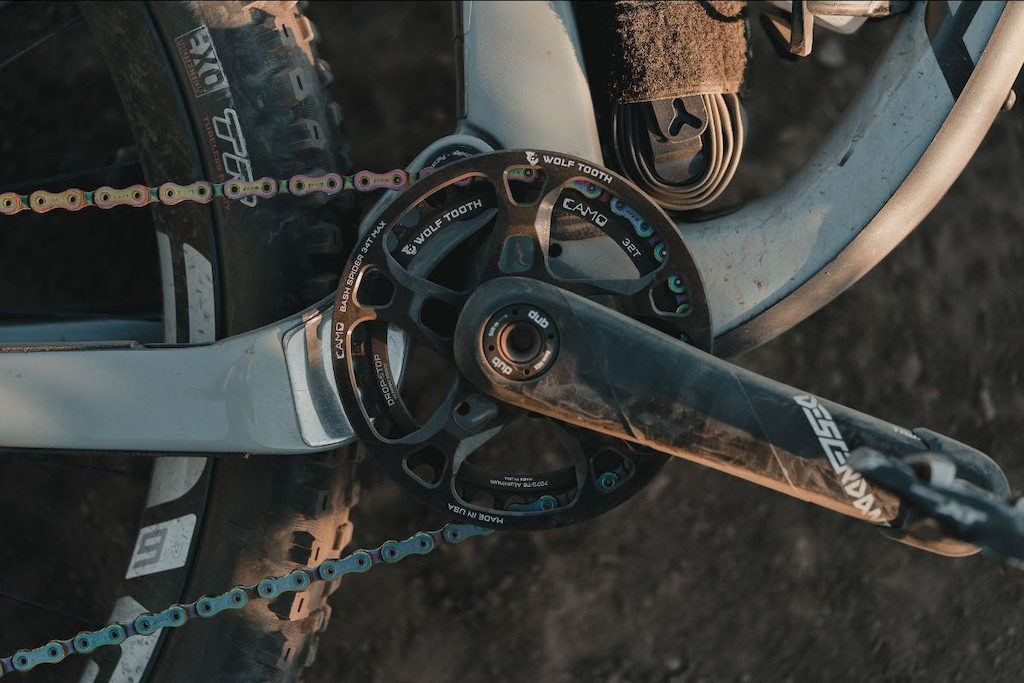 Frame and BB mounted bash rings can at times void warranties and the crankset-mounted option avoids that issue. The design of the BashSpider allows riders to roll over obstacles, using the cranks to pivot and keep moving, rather than simply a fixed slide as a static bash guard would. 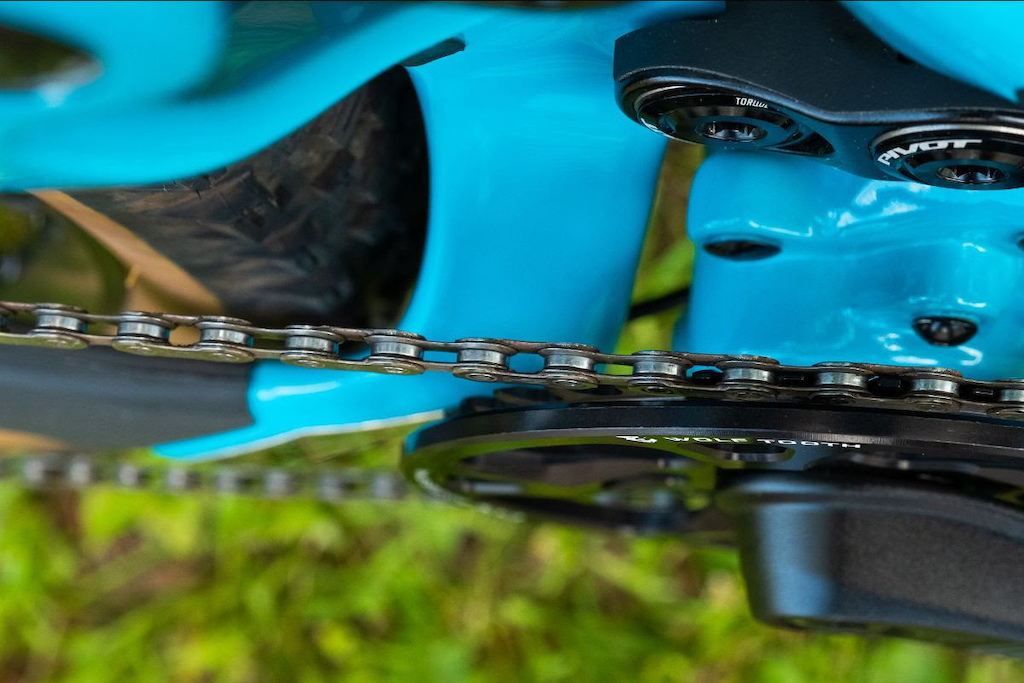 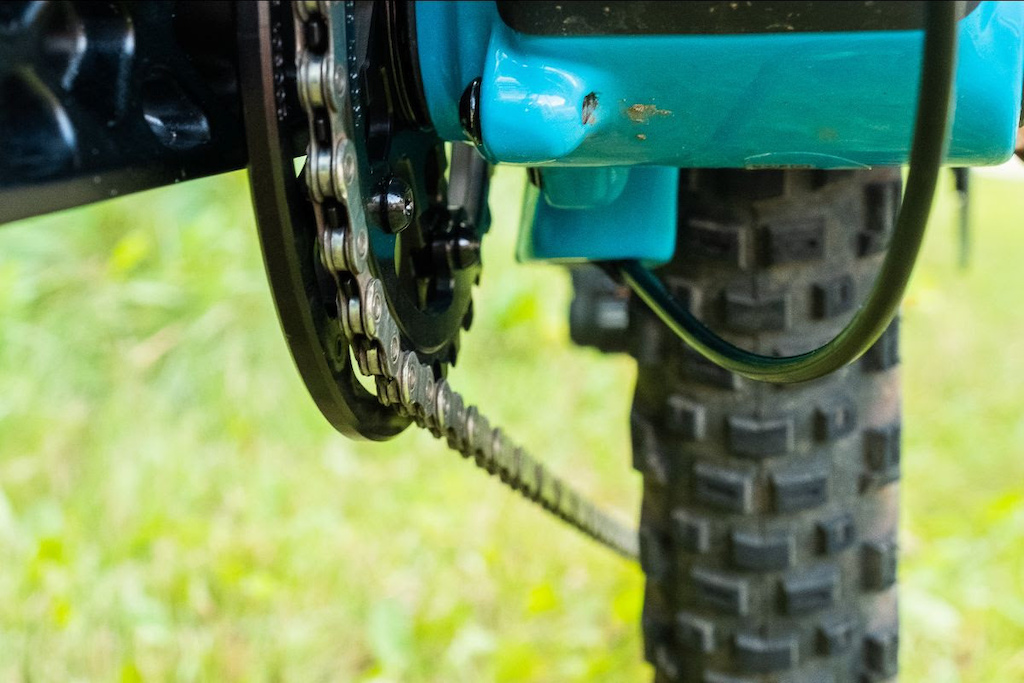 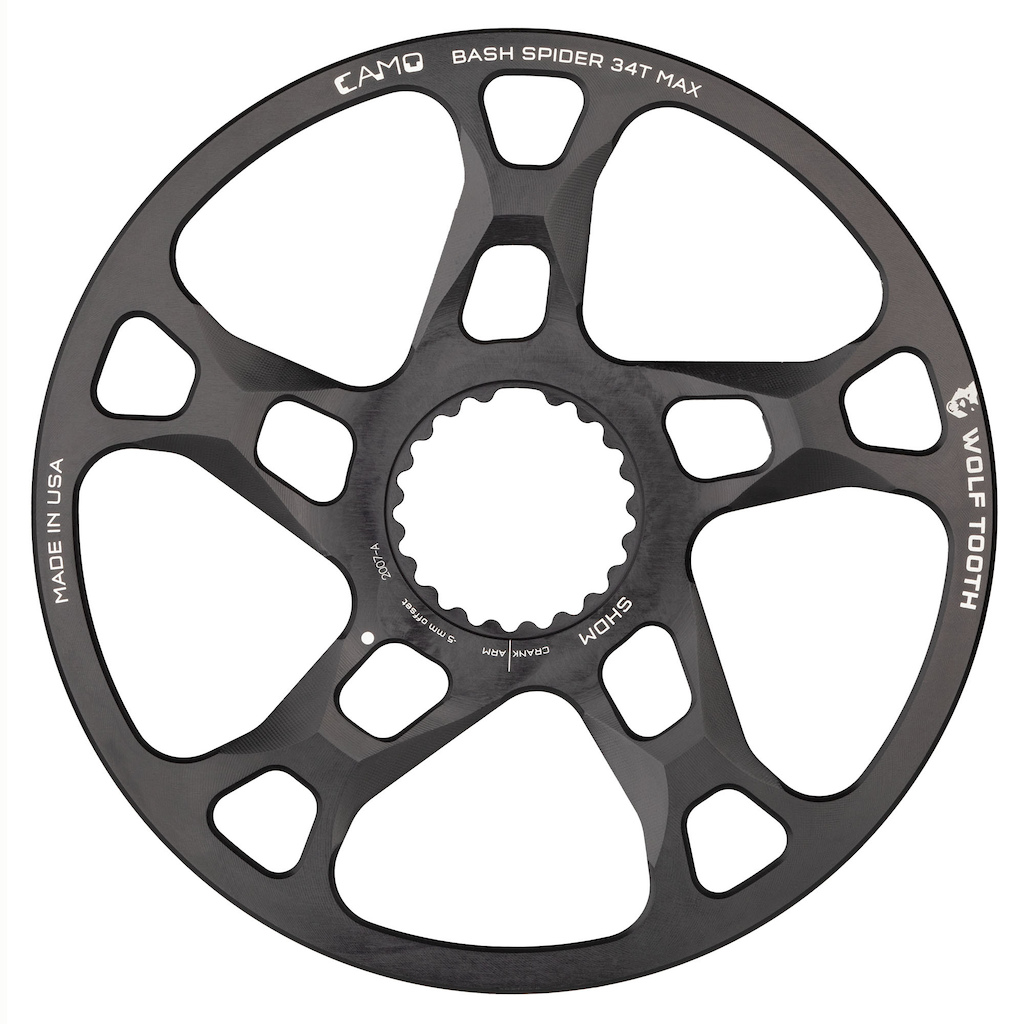 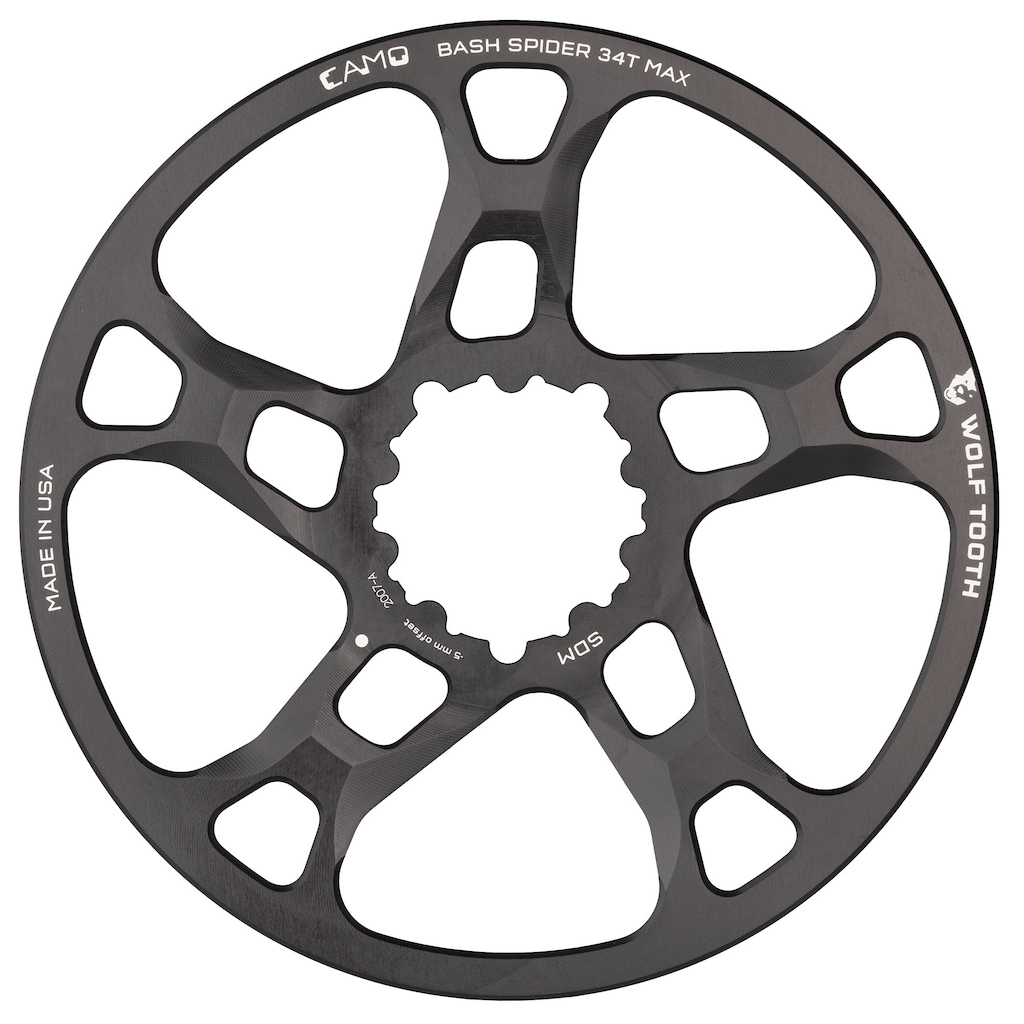 BeKwik (Aug 5, 2020 at 21:10)
@JDFF: the original chainwheel sprocket guard came out around 1990. Just as awesome, and unnecessary, then as it is now. Wolf Tooth just needs to make it work with any chainring.

konamat (Aug 5, 2020 at 22:33)
@BeKwik: coming from a steep and rocky area, we were happy to remove the bigger chain ring and use a bash guard back in the 90's. I still see some bent rings these days. Saying it is unnecessary really depend on where you live.

TylerG96 (Aug 5, 2020 at 18:43)
also ISCG mounted bash guards extent so far out and end up lowering your bottom bracket height, making it easier to bash it on rocks!

KiwiXC (Aug 6, 2020 at 5:20)
I never saw the point of bash guards, I guessed I lived a sheltered life in New Zealand, but now I live in Nova Scotia I get it. Pedal, crank, chainring and derailleur strikes on granite are just part of everyday riding here.

martn (Aug 6, 2020 at 2:47)
I still don't fully understand why the industry quietly discontinued traditional spiders where you could easily replace chainrings. There was a time when 104 mm could be called a 'standard'. (Almost) Any manufacturer's chainring would fit any manufacturer's crankset and you didn't even need to take off the whole crank to replace it. The keen had the option to mount a bash ring while nobody needed to. What was wrong about that?

At least there's another option to run a bash ring on a modern crankset now, thanks Wolf Tooth! Good to know that all is not lost when I run out of old cranks sometime.

cck9 (Aug 5, 2020 at 19:21)
Why would you want the impact of a rock going into the cranks and BB bearings instead of through a bash guide then into the frame?

MAtechshit (Aug 5, 2020 at 19:25)
Cranks and bottom bracket are replaceable metal, frames are plastic and forces are transferred through 3 small iscg bolts. I'm all about getting this to mount up on a new Shimano crank set

loganflores (Aug 5, 2020 at 21:12)
@MAtechshit: your bb shell is attached to your frame how would that not Put a huge amount of force on as you said your plastic frame. Also I thought carbon was stronger whatever. Either you crack off your little iscg mounts or you crack your bb shell not sure what the difference is. Maybe you only break your guide or tabs instead of your frame. Maybe you break your cranks bb and bb shell.

emptybox (Aug 5, 2020 at 22:08)
As long as your weight is on your pedals the load is going trough less components with this bash guard. With an iscg mounted bash guard the load goes through your frame, bb , cranks and pedals

jimbug (Aug 6, 2020 at 10:29)
Without the bash, the impact of a rock is still going through the cranks and BB bearings. It is just somewhat softened by grinding your chain and teeth a bit on the way instead of the bash. When I know I'm going to be smashing into rocks anyway, I'd rather the force be taken first by the bash rather than my rings and chain on its inevitable way up to the frame.

just6979 (Aug 6, 2020 at 11:05)
@jimbug: with a bashring, the impact going through the BB is only against the weight of the bike (and a bit from your hands, yeah). The force against your much larger (compared to bike) body goes right through cranks and pedals. All impact on a bashguard (vs ring) goes through the frame then bb and cranks to you.

just6979 (Aug 6, 2020 at 11:46)
@loganflores: What huge force? Your weight is on the pedals, which are directly connected to the cranks & thus bashring. The only force going through the frame is the weight of the bike (which will always be there no matter if the bash is frame-, BB-, or crank-mounted), not the force against the rider's weight.

Hmm, but I do have some metal credit cards...

TDMAN (Aug 11, 2020 at 2:31)
After my reply, I scroll up to click something else, and after checking again the photo, I though... yeah.... everyone should adapt their equipment to trails/style/etc...but that thimg is so 90s!
Question: why ISGadapters aren't std, like it was a few years ago?having ISG bash with an upper guide would protect from impact and avoid other problems regarding the chain

acali (Aug 5, 2020 at 17:33)
Always hated trying to clean the gunk off the chainring with a bash ring. Glad to have a frame mounted bash guard now.

vinny4130 (Aug 5, 2020 at 19:12)
Sram rings don’t come loose as often as race face, Shimano is to new give an opinion biased on observations. But I would guess it to be more than sram as well, time will tell. I don’t have a horse in this race as I like rotor cranks anyway.

just6979 (Aug 6, 2020 at 11:35)
First, SRAM's direct mount, and I think some others, is a very different design than Centerlock. Raceface DM is the only one I can think of that uses the same threaded lock-ring design, but there are probably others. However, the biggest problem with Centerlock was that many many hubs had terrible tolerances on the Centerlock mount, so the rotors often were loose or became loose.

Just needs a small upper chainguide that interfaces with the bash ring.

zoobab2 (Aug 7, 2020 at 1:17)
A Mondraker Dune bike I acquired came with a big ring milled to the point where there were no teeth, to behave like a bashguard.

just6979 (Aug 6, 2020 at 11:11)
Doesn't help when rocks put burrs in your chain and links get stuck and your chain skips or drops. A strong chainring is nice, but the chain itself takes a good bit of the impact, too.

I had to find a good 170mm (not a 175 with the holed drilled further in) 104bcd crank (went raceface directmount with a 2x spider) for my Stumpy because on the literal first ride I got a rock-strike-induced stuck link. And on the second ride, and then my parts arrived and I started polishing the black bashring to silver by using granite just left lying around, instead of breaking chains

TDMAN (Aug 6, 2020 at 17:03)
@just6979: I never had those problems in over 30years riding... used to have a bash, but after finding out that the steel rings wouldn't bend, I prefer to ditch superfluos parts im favor of simple looks and less weight. But yeah... if your setup do the trick, stick to it!

just6979 (Aug 7, 2020 at 8:04)
@TDMAN: Lucky you, because after 26 years of riding with a bashring, I had these problems within one single ride without a bashring/guard. Maybe my rocks are a different flavor, because they mean that a bashring is _far_ from superfluous, it's literally required to get a chain to last more than a handful of rides.

What suits me, won't suit you/others. Nobody is wright...nobody is wrong.

PS- as i've stated I rode several yeara with bash, and many more without

just6979 (Aug 6, 2020 at 11:43)
It's not, really, and that's the point. With most bikes coming with direct mount cranks, and many bikes not having ISCG mounts (which are arguably the wrong thing to use for a bashguard), there was only one (*) option for a bashring on a direct mount crank, and that was Wolf Tooth's stainless bashring that only mounted to their stainless direct-mount chainrings, which only go up to 30t. Now there is a lighter and less expensive solution, from Wolf Tooth again (they're awesome!)

**Actually, there are a couple other obscure and expensive ways to get a bashring on a direct mount crank (NSB makes a SRAM-DM spider and matching bashring for Spesh's 76 BCD rings, for one), but they don't provide a Boost chainline, which means there might not be enough chainring to chainstay clearance on many recent frames, as there wasn't on my Stumpy.

Kramz (Aug 6, 2020 at 16:40)
@just6979: ISCG05 mounts are great, but under strengthened in my opinion. They should be integrated into the frame, not just tabs. Just my opinion, I'm always worried about breaking mine off, or bending them, and being SOL.

That's exactly the point I was making. They're not "great" if they're too weak. Except they're not too weak for what they were originally designed for: Chain Guides, just like the name says. With a full upper and lower chain guide backplate there, it was easy to add a bashguard even if that was a bad decision.

In the rush to always make things look cooler than before, everyone jumped on the DirectMount bandwagon because bashguards on ISCG mounts were a thing, even if the mounts weren't made to handle bashes. Then everyone slowly realized that bashguard on ISCG mount was silly, so they just left them off and went back to using the tabs for just [upper] chain guides. Some companies (Spesh for one) don't even put all three tabs on some frame so you're not even tempted to put a bashguard on, andl others leave the tabs off completely. This means folks who ride where rocks are an actual thing need to either sacrifice chains and chainrings, or find aftermarket solutions (104bcd crankset-ring-bash combo, or this awesome solution).

My rarely used hardtail has a bashguard on its ISCG mounts, and it's about to come off, because the tabs are already bending. Sure it looks mildly "cleaner" without a bashring, but it looks, and is, miles "stronger" with a bashring, and I'll never have to worry about having to bend a broken bashguard out of the way of the chainring someday.

Kramz (Aug 7, 2020 at 11:04)
@just6979: Yeah, the biggest problem with a bash ring is it's rotating inertia directly on the chain ring. Which you want to avoid. I don't know what the answer is, but for me, it's basically ISCG05 tabs, but built as a strong integral part of the bottom bracket, not just tabs. But then, that's probably a weight problem too. I would draw a diagram, but I don't currently have a computer.

What exactly is that (minimal) additional intertia harming? Can't accelerate the cranks fast enough to keep up with the cadence changes when you dump 4 gears on an Eagle cassette? The mass of your legs alone is a much much larger factor regarding any inertia in the crank system.

We're not talking about adding multiple kilos to the crank, or adding hundreds of grams at 30-40cm from the axis of a wheel (like a DH tire vs trail tire, or an insert in a trail tire), which many people feel is a worthy trade-off for some riding conditions/trails/styles. A bashring vs a bashguard changes the rotating mass in a very negligible way.

That beefy ISCG below is great, but still doesn't help the fact that all the rider's weight still goes through the BB and frame. That means that even though those tabs are less likely to break off, the entire BB area needs to be much more impact resistant, and thus heavier, than a bike designed to take a bashring and let the cranks handle the impacts directly.

warmerdamj (Aug 5, 2020 at 21:55)
What was it about the other circles that were slightly bigger than the circle you already had on your bike that you could not stand the sight of?

Bikerdude137 (Aug 5, 2020 at 23:01)
@warmerdamj: most of the other ones i've seen are just made out of ugly plastic, i still prefer normal bashguards but at least these ones look ok
Below threshold threads are hidden

CasualTEA (Aug 5, 2020 at 17:52)
My Norco Sight VLT came with a metal (aluminum I think) bash ring/guard. Noisy AF. Took it off, bike was as quiet as a E-MTB can be, a month later chain drops in most rock gardens. Still looking for a better alternative.