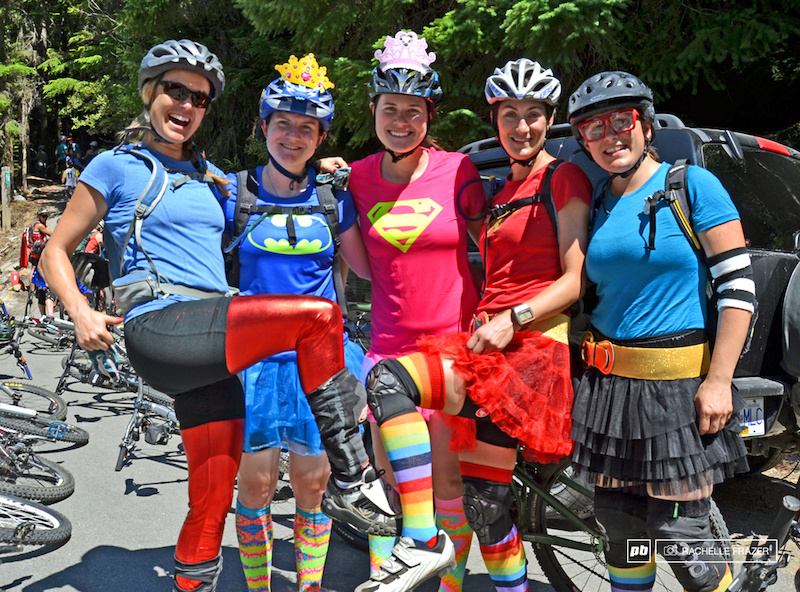 First there was Betty vs Veronica, then it was Charlie's Angels, in the year that followed there was the Battle for Bond, and in 2014 the highly anticipated women's only stage race in Whistler was re-birthed as Wonder Woman. Sewing machines worked overtime as capes were sewn late into the eve of the race, gold lame was snipped into head adornments whilst leaving sparkling remnants on lounge room floors and online stores were exhausted of their Wonder Woman costume stock in preparation for this year's event.

Clark Lewis, Race Director of the Whistler Off Road Cycling Association, had his work cut out for him. Being in its fourth year now the annual women's race is a highly anticipated event and early in the season local femme's will painstakingly postulate over the potential theme of the upcoming race and the format that they could be thrown up against. The frenzied masses are hungry for an excellent theme, an outstanding day's worth of riding and an all-round exhilarating event experience.

Lewis chose to run 5 stages, from DH and XC to enduro, to a flat time trial, to a monstrous uphill climb. The intention was to make the course fun yet challenging and so a network of older trails, some that had never been raced before, were chosen to make up the special stages. On Saturday, July 12th, 111 females descended on Whistler Valley in the scorching heat to test their personal wonder levels against Lewis' old school tech. 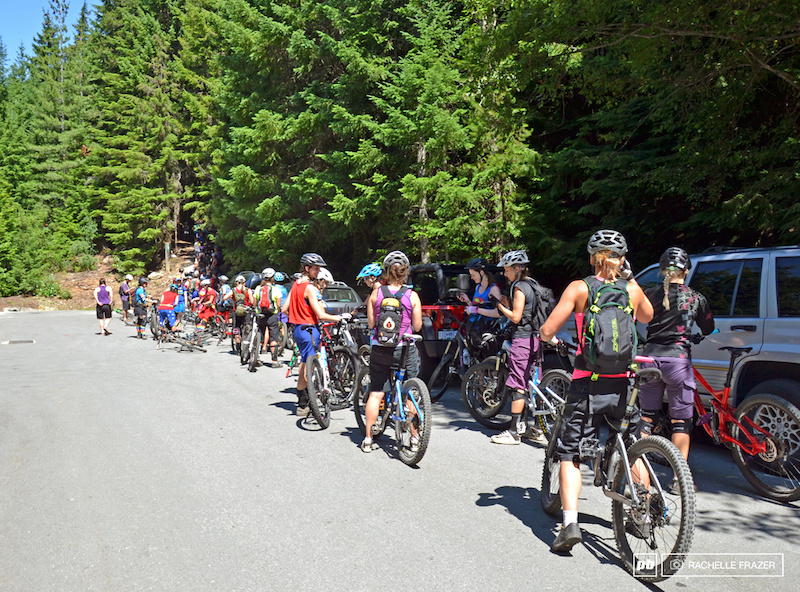 The line-up for stage one. Blueberry trail is local classic that starts with a hefty gut punching climb. No warm-ups here, just dusty lungs and silly grins. 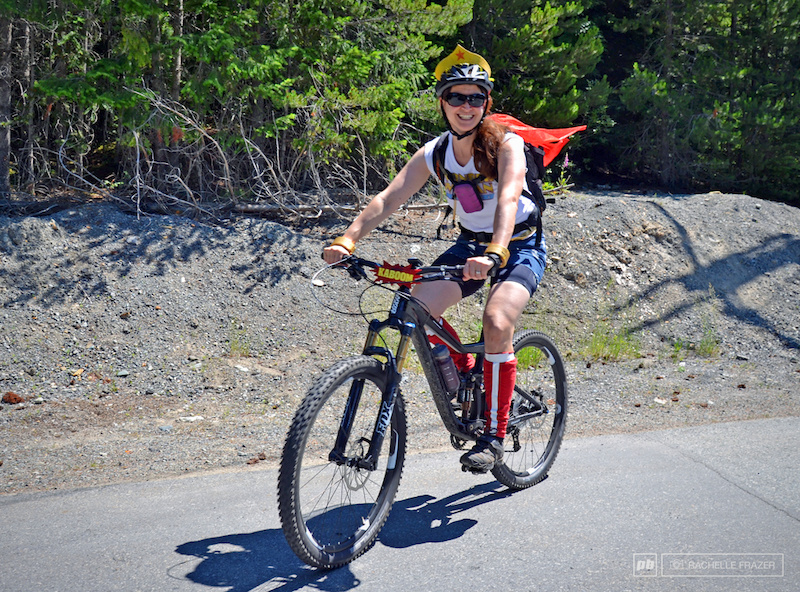 So much effort into so many costumes. Whistler has never seen so many wonder women in one go (not even with all the stagettes in the village). 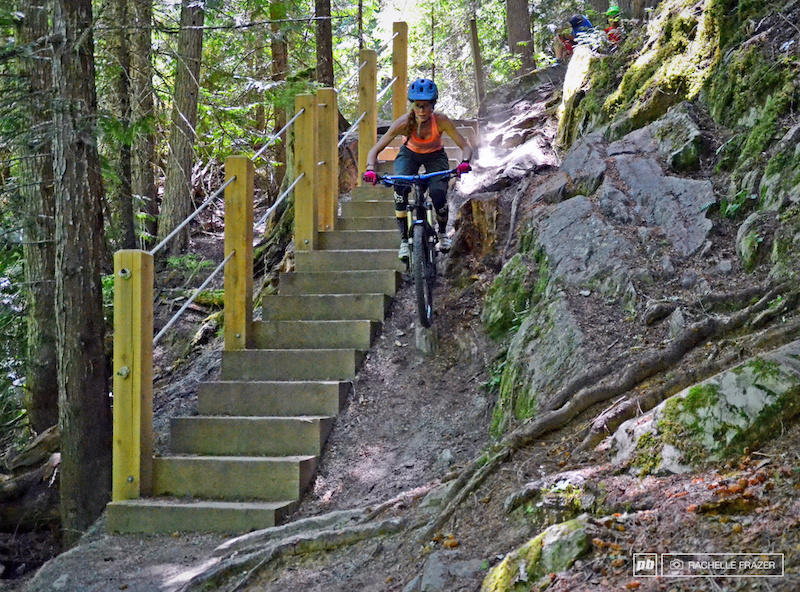 Stage one finished with a choose your own adventure. Stairs, rock garden or thread the needle as Annie Millar demonstrates here. 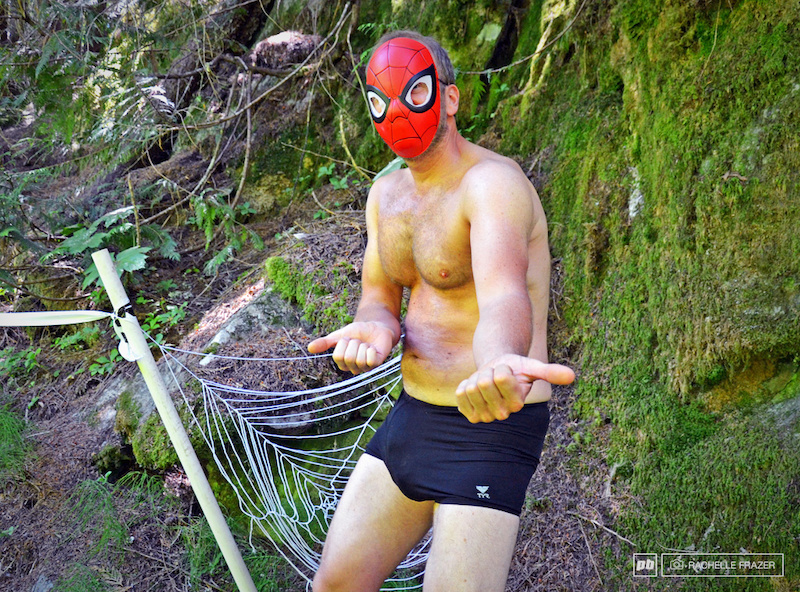 Hello Spidey. Traditionally men are the only marshals on course and the women tend to like that. 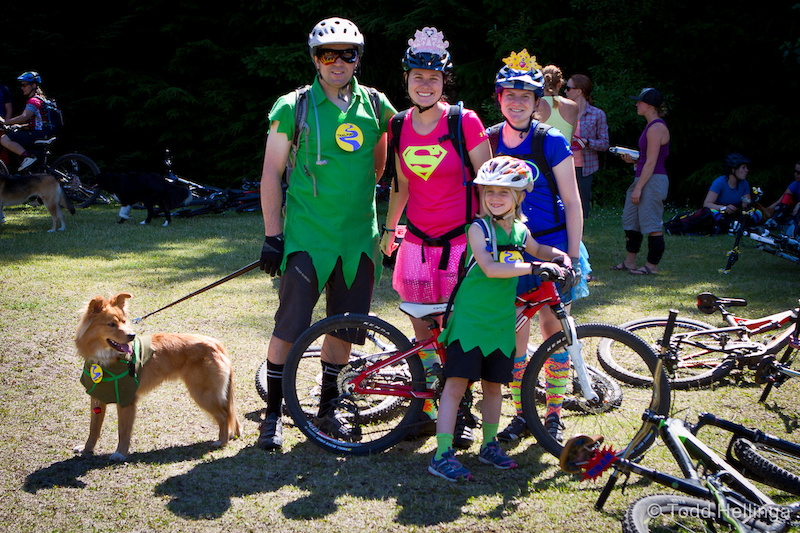 Stage two starters over at Mels Dilemma were Tony Horn and family. Tony was responsible for the first women's races in Whistler, so he is basically the godfather of all mountain biking women in Whistler. 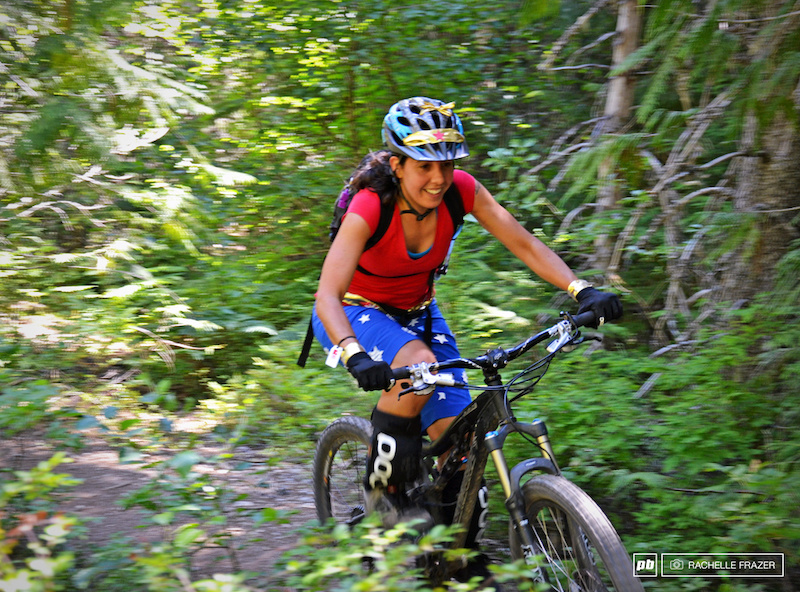 Spotted on stage two, yet another Wonder Woman on her way to the finish. 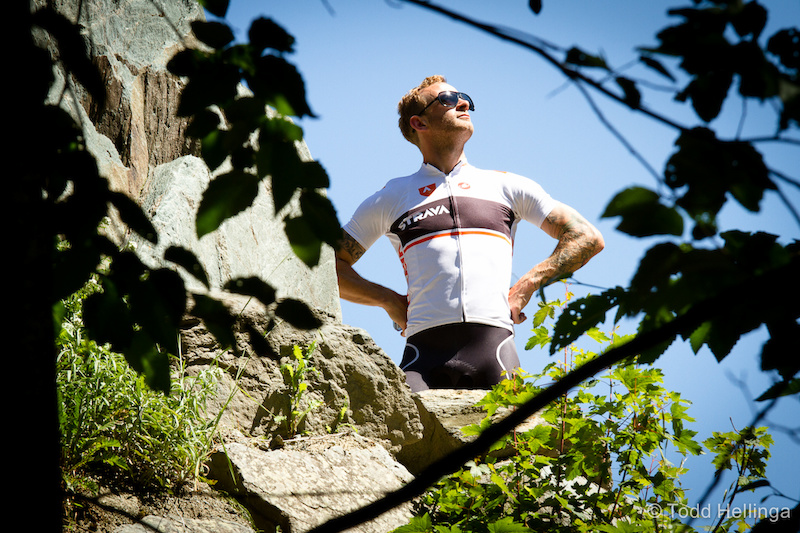 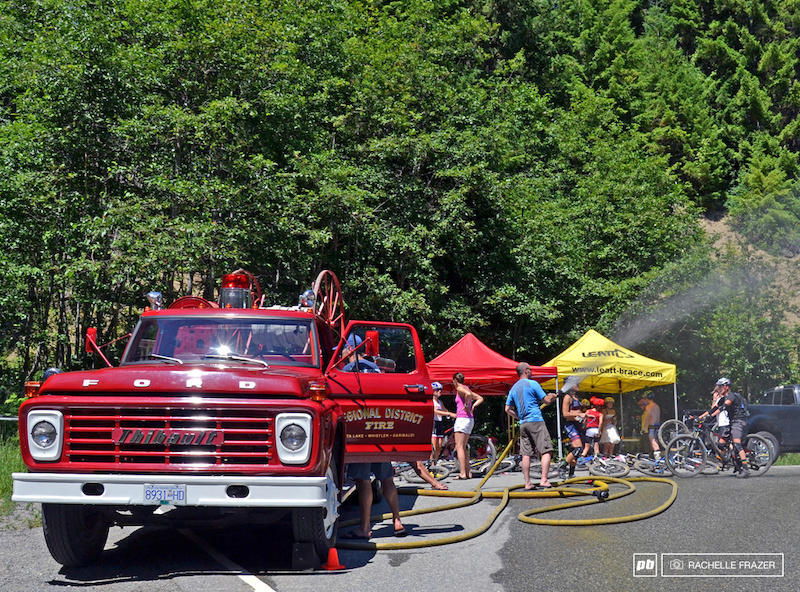 After riding the first two stages in sweltering heat the local fire truck was a welcome sight for many. 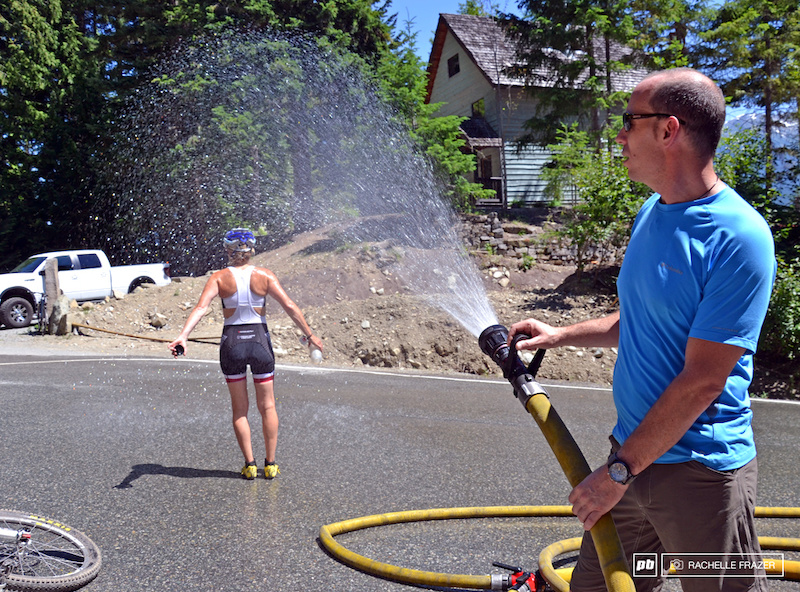 Brandi Heisterman, fastest woman of the day cools off under the shower. 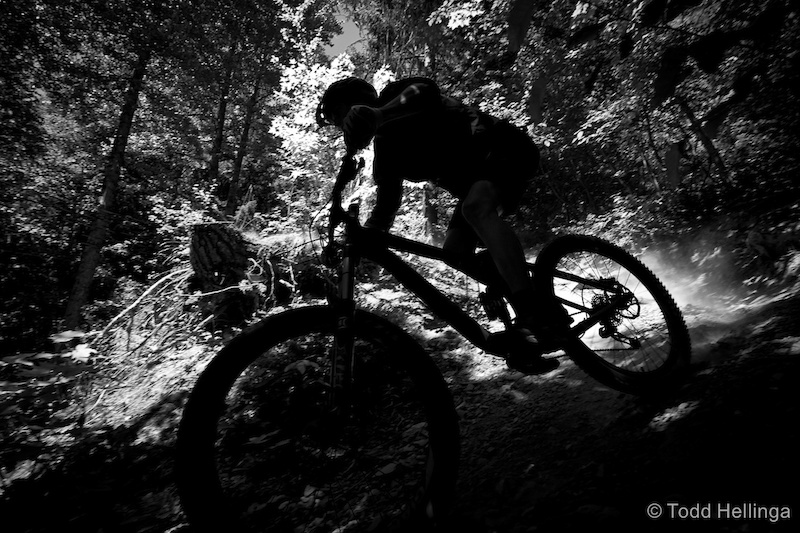 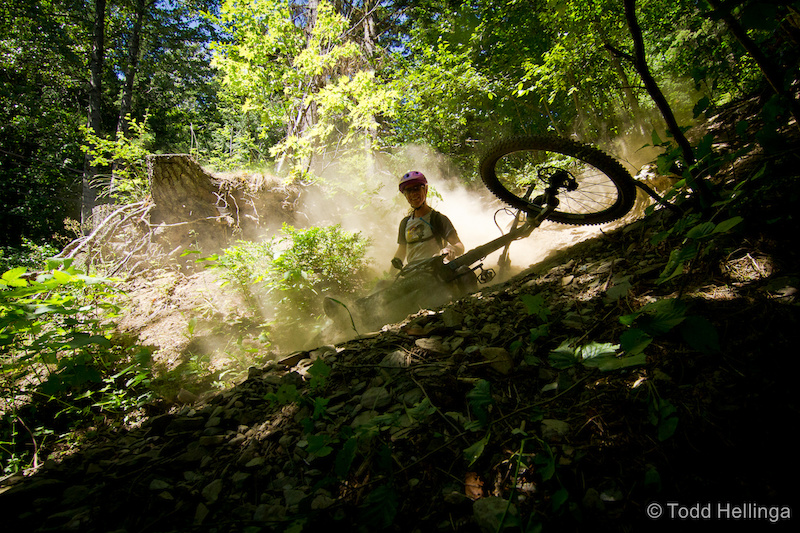 Was taking names. It was steep, eroded, dusty and just plain nasty. 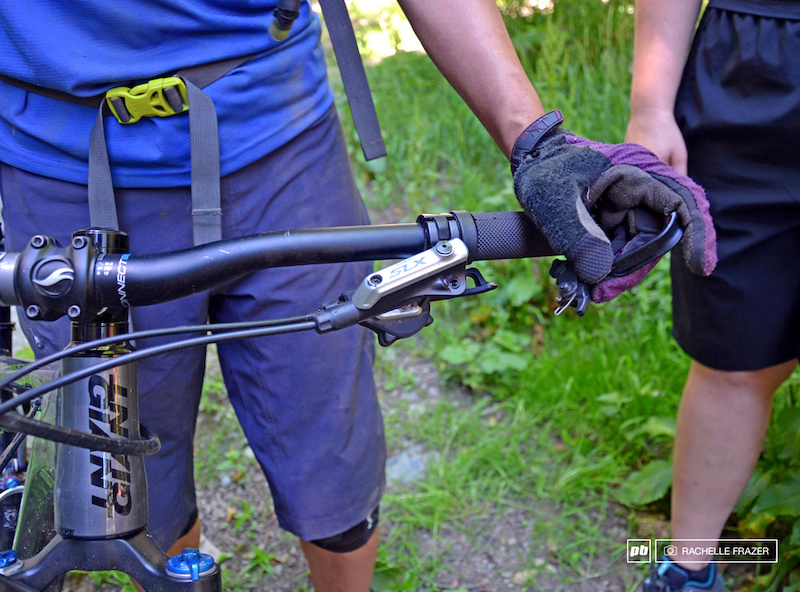 No wonder woman was injured in the breaking of this brake. Cat Scratch Fever strikes again... 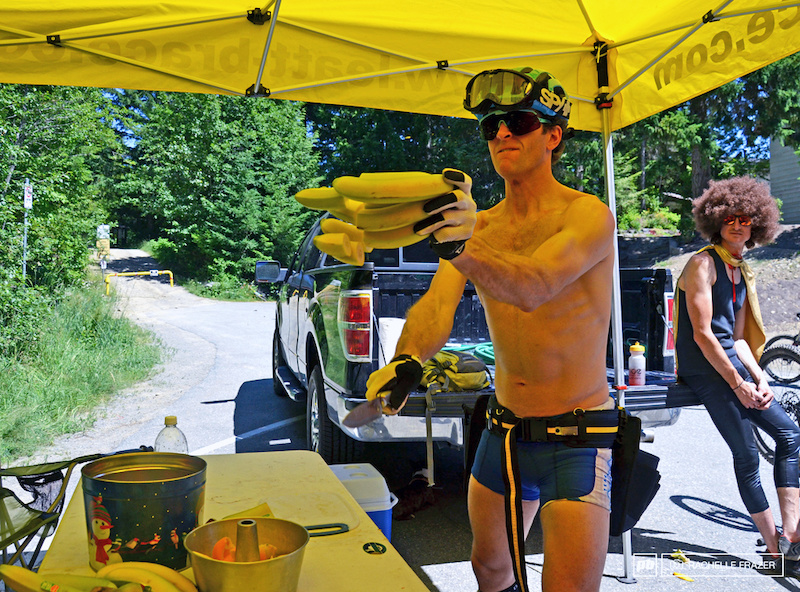 Insert inappropriate banana comment here. Josh from Dissent was getting bunchy about bananas. 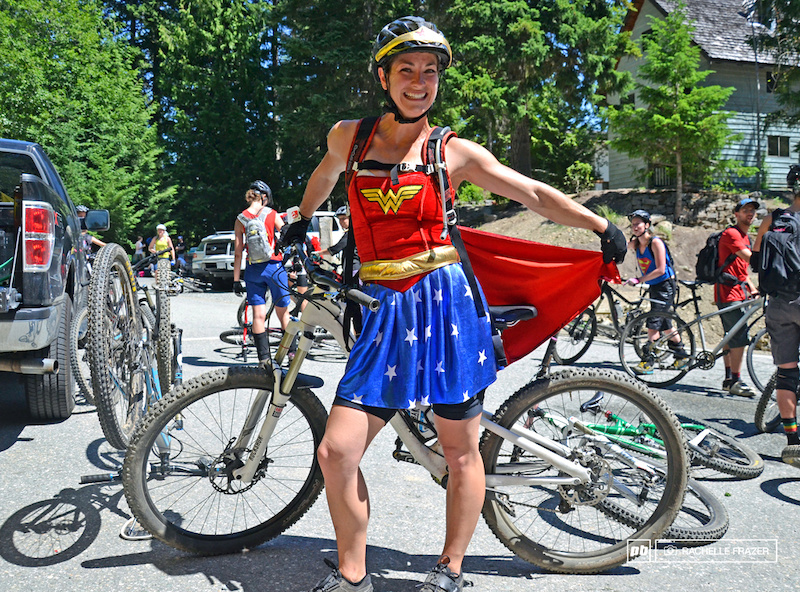 Leanne Tomkins was all smiles after 3 stages, perhaps she didn't know what was to come... 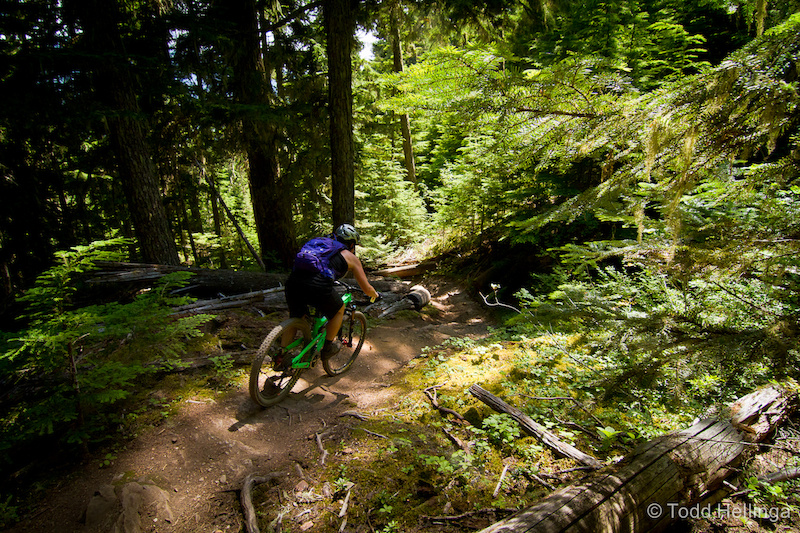 Stage 4 was a killer. A big old timed climb up Rick's Roost was followed by one of the valley's funnest classic descents, Billy's Epic. 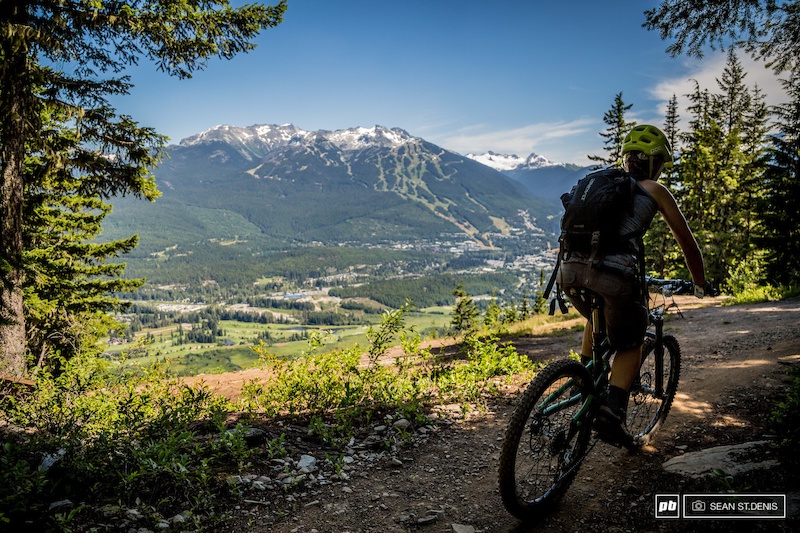 As it turns out, the climb may have been worth it, as the views were pretty wonderful up there. 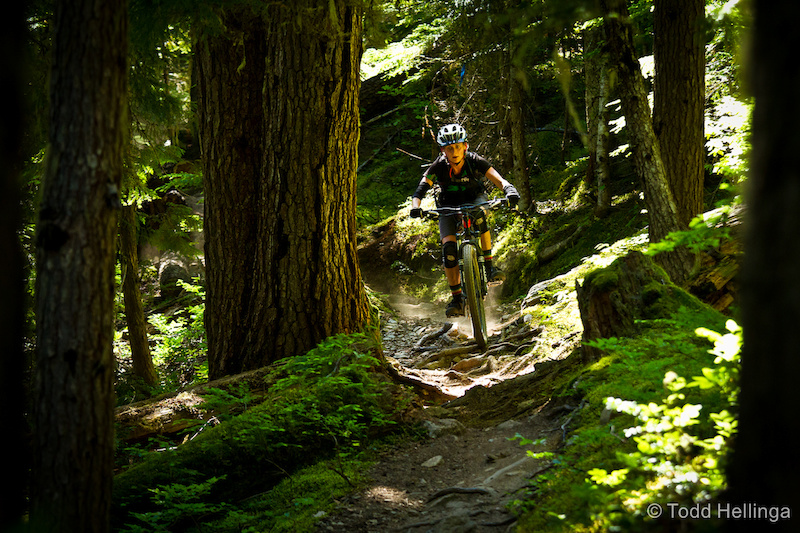 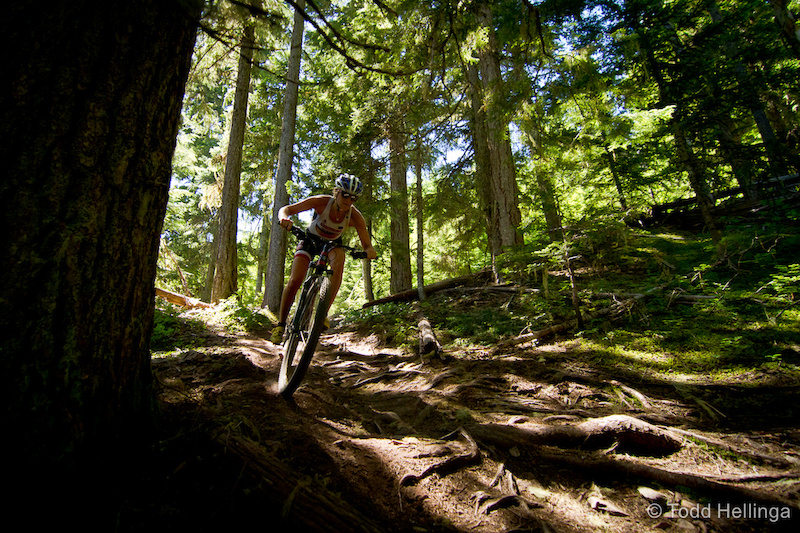 And the descending was damn fun. 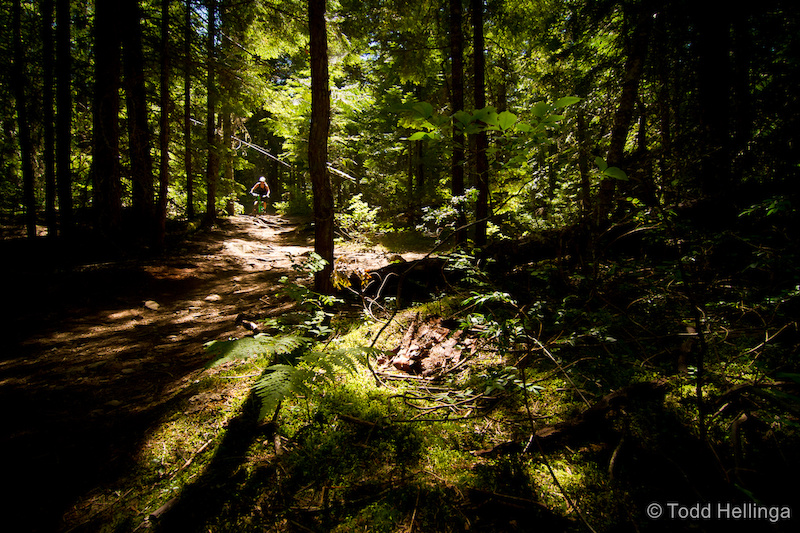 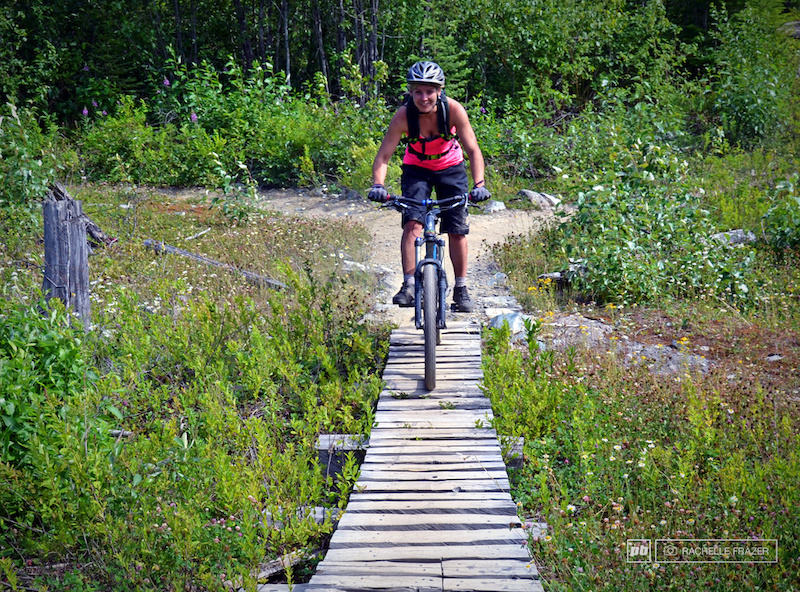 By stage 5 on Cut Yer Bars, many were toast. The multiple climbs and intense heat sapped the energy of most, but Jenn Coliver was all smiles. She must have known that she was nearing the end. 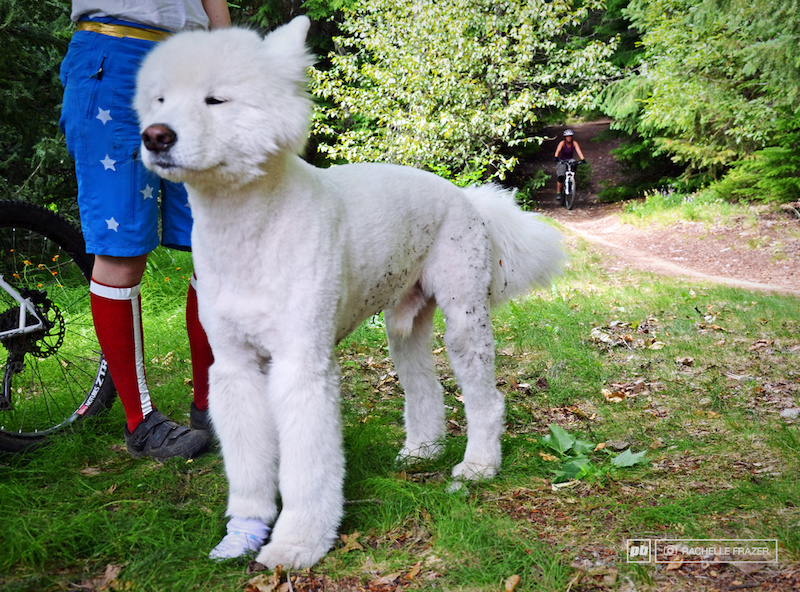 Charles the Summer Eskimo was on hand to greet racers at the finish line. 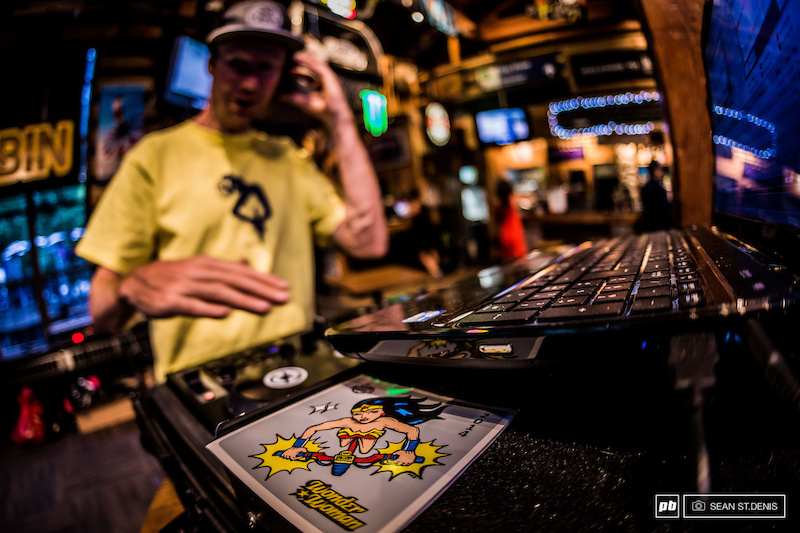 And then it was on to potentially the most exciting part of the race - stage 6. The after party! 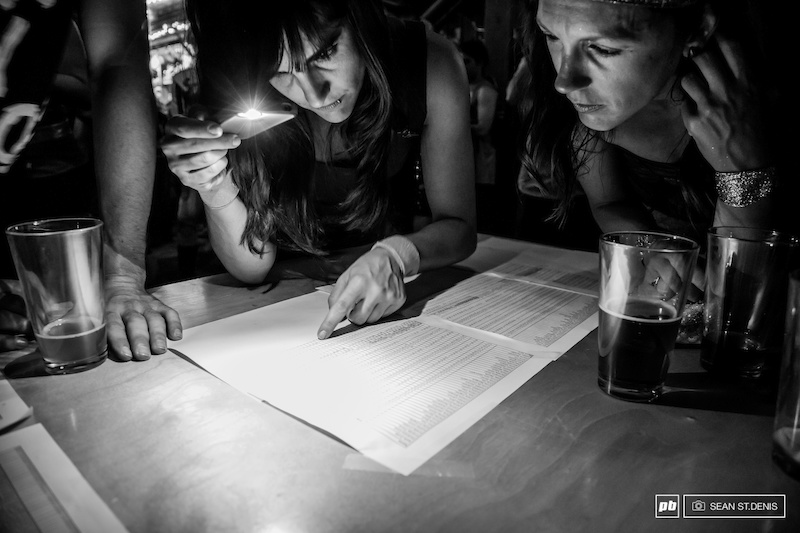 This is of course where everyone eagerly awaits their results. 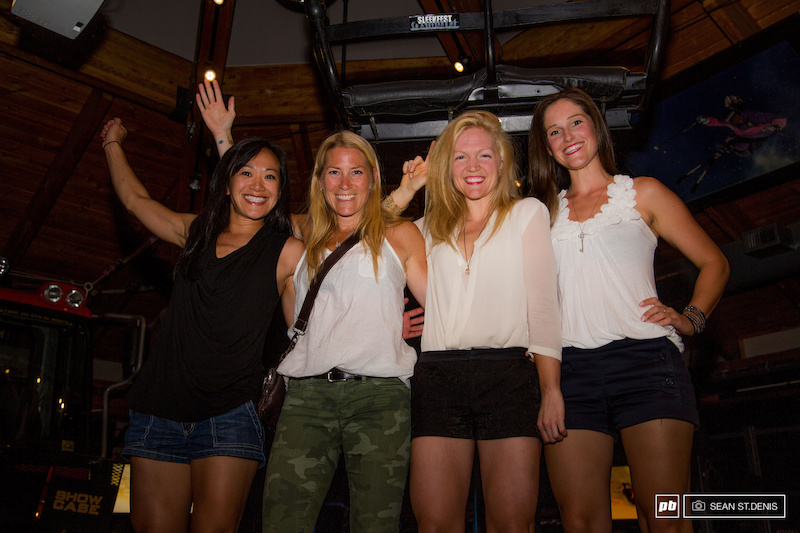 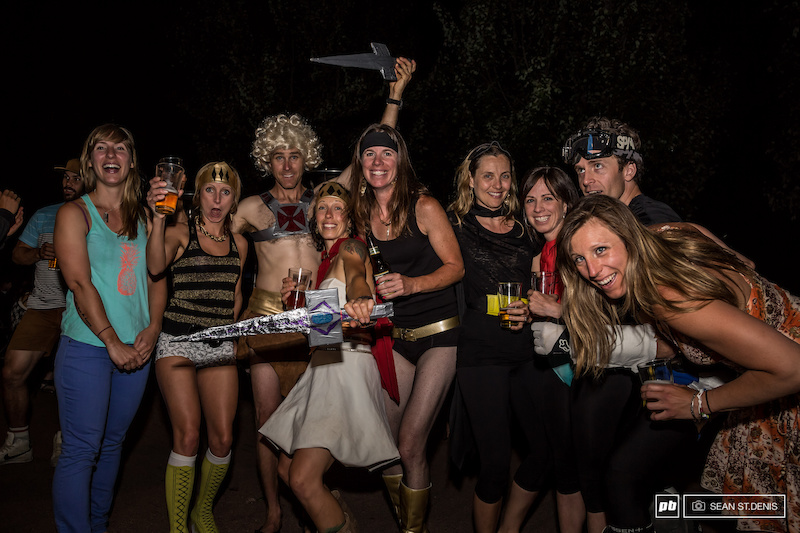 A big thanks to Clark Lewis for taking over the reins and continuing on the tradition of women's racing in Whistler.

dirtyjanedotcom (Jul 16, 2014 at 8:53)
Awyeah! Hello male volunteers in spandex. Yesss! Congrats to all that participated!! You all rock so damn much.
Post a Comment