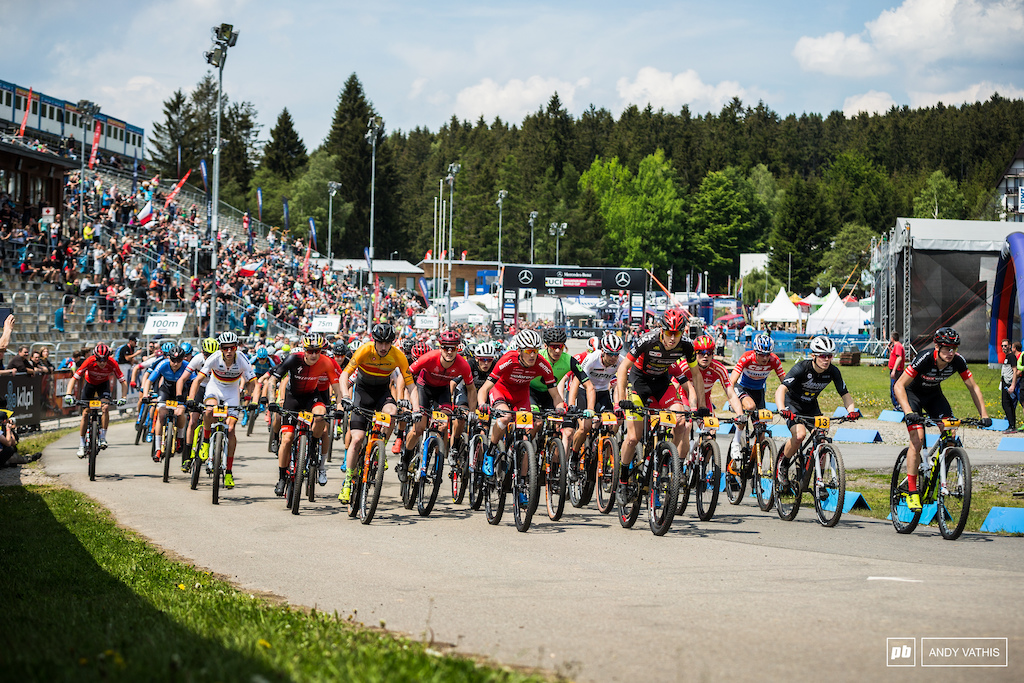 World Cup XCO riders have been warned by the UCI prior to the Les Gets World Cup for using 'Team' plates to gain extra training time.

As per regulation 4.9.014, "A coach of a national team or a UCI elite MTB team or UCI MTB team who holds a licence, must request a handlebar number to use when reconnoitering the course. As well as the handlebar number he must wear a helmet." In short, coaches can register for a 'Team' plate that allows them ride alongside their team's riders in any practice session to help them with line choice, measuring efforts and general race tactics.

However, it seems that some racers have been using these plates to enter a practice session they are not normally allowed in and the UCI is trying to cut down on this practice. No riders have explicitly been named but it seems this has been a tactic among teams at both Albstadt and Nove Mesto. Team plates will now only be issued to National Federations, UCI teams and Elite teams and any team found abusing the system will lose the privilege for the rest of the year.

iamamodel (Jul 2, 2019 at 3:08)
All right, which one of you dirty rotten Pinkbikers have been trying to squeeze in extra XC training laps?

verb
gerund or present participle: reconnoitering
make a military observation of (a region).
"they reconnoitered the beach some weeks before the landing"
synonyms: survey, make a reconnaissance of, explore, scout (out), make a survey of, make an observation of;

JSTootell (Jul 3, 2019 at 18:26)
I'm actually surprised, I thought this was common vernacular. Now let's see how many people Google 'Vernacular'.

iammarkstewart (Jul 3, 2019 at 10:16)
Not to pile on, but is cheating cheating? A fine? If you really want to stop this behaviour hit the rider also. Fine the team, DQ the coach for that event, time penalty or DQ to the rider for that event. That would cut down the reward for the risk.

That is if course recon is that beneficial at that level of racing. I'm working on world champion status so maybe I should pay more attention.

aljoburr Plus (Jul 2, 2019 at 12:26)
That is all we need more rules, next the UCI are going too be banning e-bike for training as it is more fun for less effort?

boozed (Jul 2, 2019 at 16:21)
Rules typically exist because someone got cheeky. Case in point.
Below threshold threads are hidden

thesharkman (Jul 2, 2019 at 8:47)
Let's hope they didn't use any masking agents during this then blame it on a crash.
Post a Comment