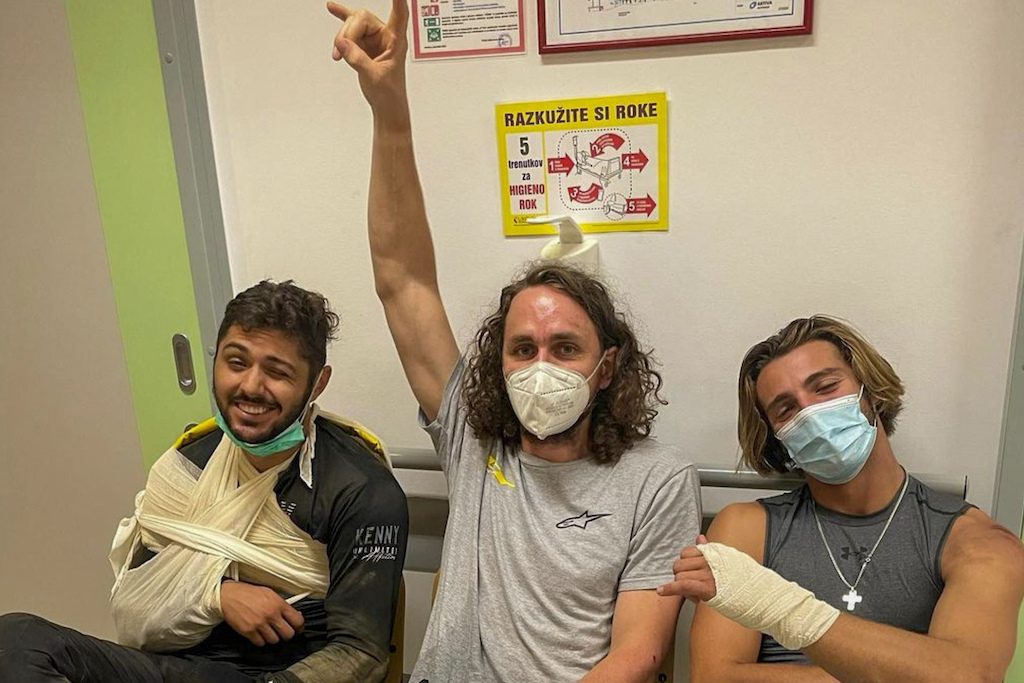 The brutal, dry Maribor track got a few more with Wyn Masters, Bernard Kerr, Raphael Gutierrez, and Goncalo Bandeira all injured at the hospital in Maribor.

Wyn posted a photo online showing himself in the hospital sitting between Raphael Gutierrez, whose arm was in a sling with what looked like a shoulder injury, and Goncalo Bandeira, whose wrist was wrapped and who later shared a photo of himself with a cast on his forearm. Wyn said he broke his fifth metacarpal. Wyn also shared a clip on his Instagram story of Bernard Kerr, whose forearm was in a cast, and he briefly mentioned that he hopes Loris Revelli is doing all right, leading us to believe that Revelli may also be injured. Judging from the post, Finn Iles was also at the hospital, but we sincerely hope he was just there to offer moral support.

We'll keep you updated when we learn whether Finn Iles and Loris Revelli are injured and which riders actually are able to race this weekend. We wish these riders all the best as they recover.

"cathro analyses his own racerun while riding "

not-really (Aug 13, 2021 at 13:33)
He should do a WynTV special from Maribor Hospital, seems to be the place where all the action is taking place. Heal soon you all!

vinay (Aug 14, 2021 at 2:01)
So, what will he use for a microphone this time around? An amputated limb, a syringe, a crutch? There is so much typical stuff to be found at hospitals and they all make for a good working microphone.

vinay (Aug 20, 2021 at 11:55)
@danielfloyd: Well, if you come across these more often outside an hospital than they can be found inside an hospital there surely must be something wrong. Not sure what happens with them usually. Maybe they'll be used for research and education (but then usually stay within the academic hospital) or they'll be incinerated. I doubt they'll be brought somewhere else outside the hospital.

ripinitup (Aug 14, 2021 at 10:53)
@c-radicallis: I can ASSURE you that USA Medic's DO NOT get paid Yeti E-bike, let alone Yeti money. If you see a medic riding a Yeti, we either: stole it, borrowed it, inherited it, or put it on credit. In the off chance that it is bought and paid for, it's because we all have to work 3 jobs to survive, and we've saved up for 5 years and the bike is now only 10 years old.

subwaypanda (Aug 13, 2021 at 14:32)
Thanks! Do you know if there were any parts of the track in particular that were causing crashes/injuries?

I think the rock garden!

RayDolor (Aug 13, 2021 at 15:04)
Yes, I'm sure that the Slovenian medical system knows how to keep its' injured foreign athletes in good spirits and pain-free. Especially pain-free.

philalm (Aug 13, 2021 at 18:55)
Whatever they gave Raphael Gutierrez for the pain seems to be working reeaally well. Heal up fast folks.

Trudeez (Aug 13, 2021 at 13:37)
This reminds me of the Kamikaze/Cali Endure four or five years ago. The organizers had the beginner and sport classes going down tracks like Bullitt, Follow Me, Skidmarks etc.. the hospital was full before lunch. Lots of arms, collar bones, concussions.

To be fair, I do fully believe racing should push riders to their limit and be a big challenge to most. However. I think Bullitt and Follow Me are too much for beginners.

Healing vibes out to all the racers laid up today!

Trudeez (Aug 16, 2021 at 13:26)
@Mattysville: I never said anything about the pros riding ability. I made a comparison about the scene in the emergency room.

sportstuff (Aug 13, 2021 at 20:43)
Healing vibes to Wyn, Bernie, Raph & Goncalo…
Wyn & Bernard should film all their experiences, they are wicked presenters.

morgiou (Aug 14, 2021 at 2:02)
Is this a good message to the public while countries still try to avoid stress to hospitals for covid prevention? Especially together with the photo? I wish for this sport to be more responsible it will only make it grow.

roliK (Aug 14, 2021 at 2:49)
There is no stress to hospitals in Slovenia due to Covid - currently there are 8 people in intensive care in the whole country. I guess they are very much able to handle that.