Join Pinkbike  Login
X Fusion Side Flight Champs was a "jam format" contest to bring together athletes in the true off season of our sport. This low key, friendly battle between friends showcased the talent these riders have. They were judged on Amplitude, Style and of course how sideways they can throw their bikes." - X Fusion


Look inside for photos of how things played out and results!After a wind delay and some BBQ for lunch the guys were excited to start day one practice. Graeme Pitts was the guinea pig for the day, taking the first runs. 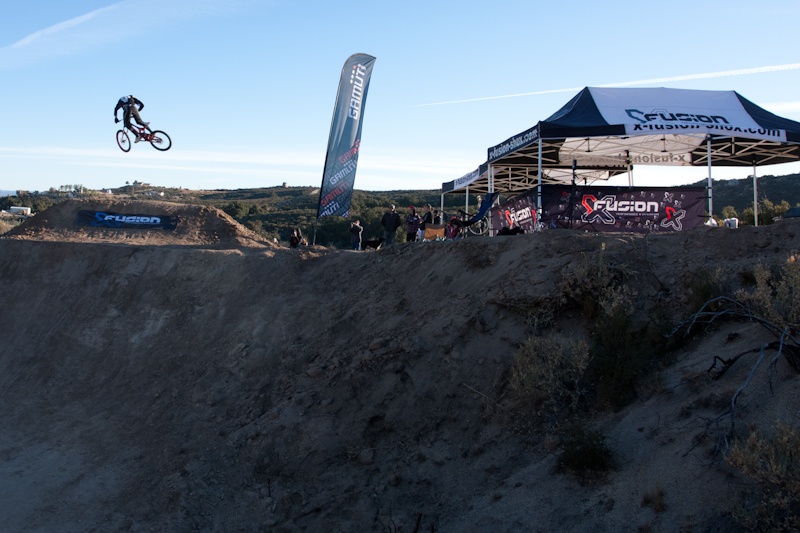 Graeme Pitts
The aim for X Fusion's Side Flight Championships was to see riders doing big whips on their downhill bikes, over really big jumps. X Fusion Team rider Griz was in charge of building these massive jumps and he did an amazing job, I didn't hear one rider complain about the jumps.

Riders started on top of the hill and pedaled into the first jump which was a 35 ft step down. 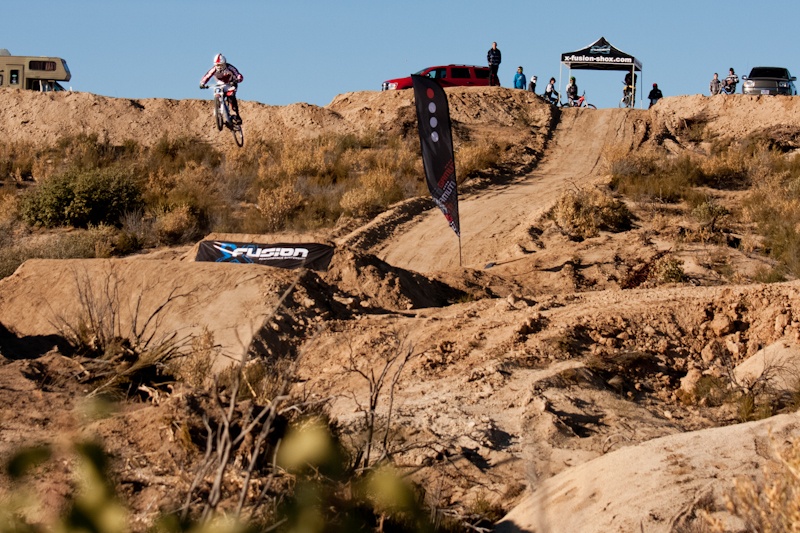 Ryan boosts the step down solo.
Once over the step down, riders were looking at the massive lip of a 40 foot step up. This jump drew most of the spectators and was where all the riders hung out between runs. 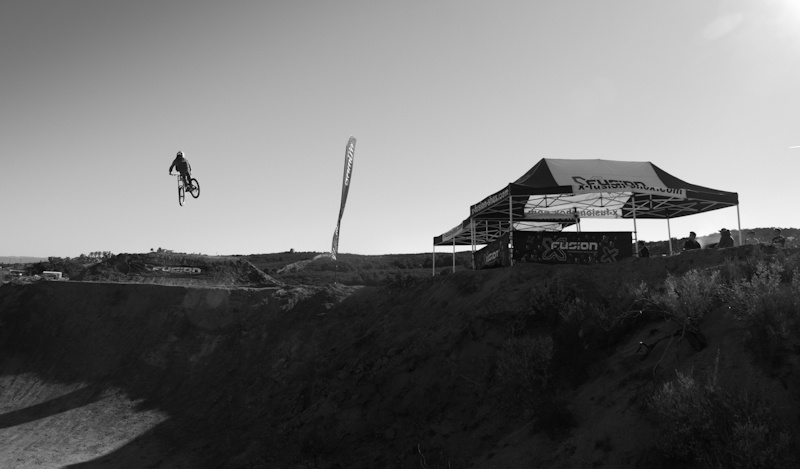 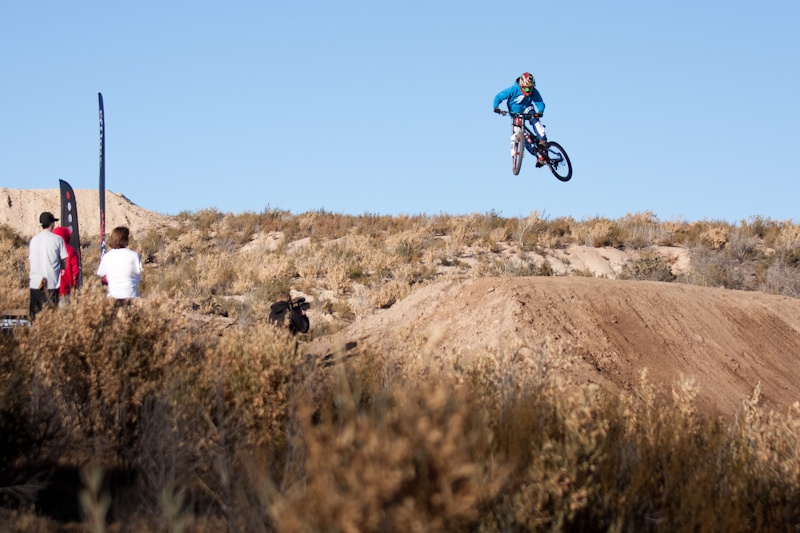 JD
After riders cracked the biggest whips that they could and brought them back, they would give their brakes a tap to set up for the last jump which was a right hip. 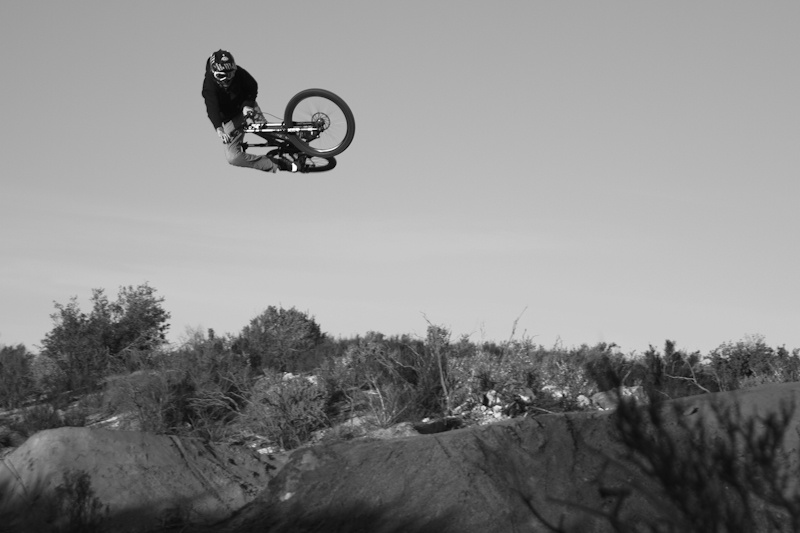 Brendan Fairclough styles out the hip 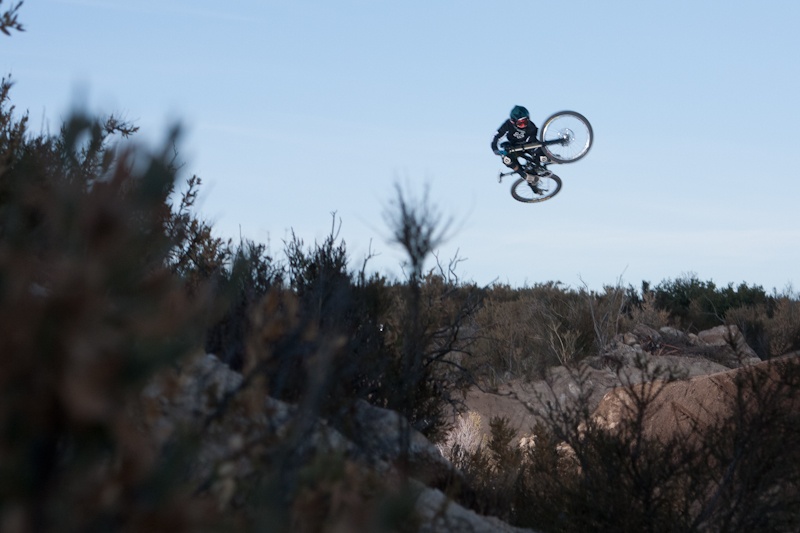 Tyler McCaul does one of the flattest tables of the day.
The winds were calm for the rest of the afternoon and the riders took as many runs as they could before the sun set.

Here are some photos of just how practice went down: 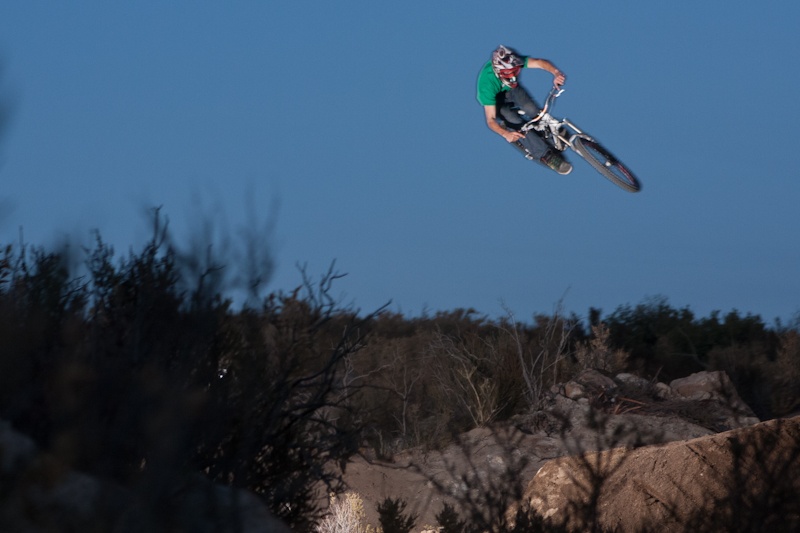 Cob was blasting every jump on the course as high as anyone else. 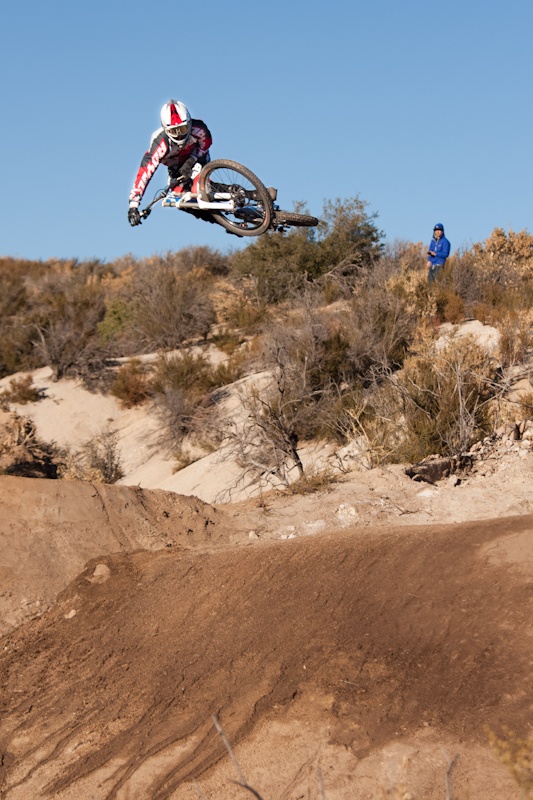 With the setting of the sun came the camp fire and the riders celebrated a good day of riding. 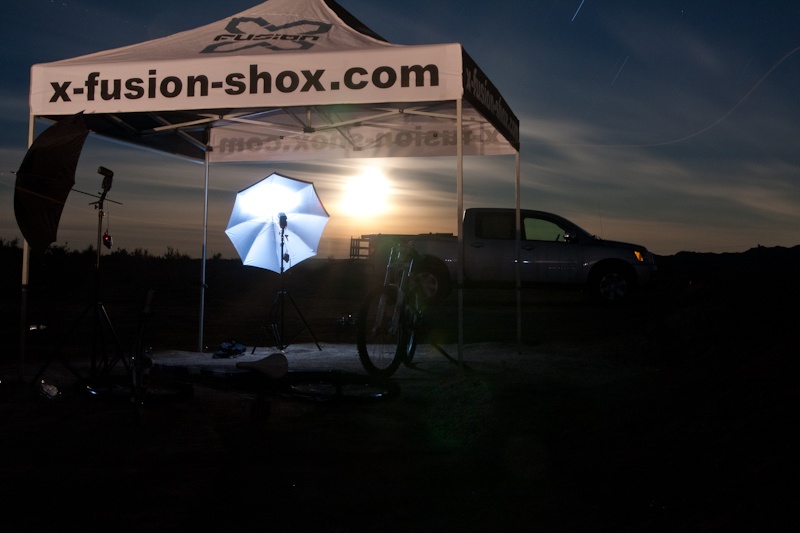 The moon
The morning of day two was calm and had riders and spectators excited about the finals. But the sunny, calm Californian weather failed us and by the time the practice session started, the winds were back in full force. It was decided that finals would be put on hold until the winds died down, but they never did. 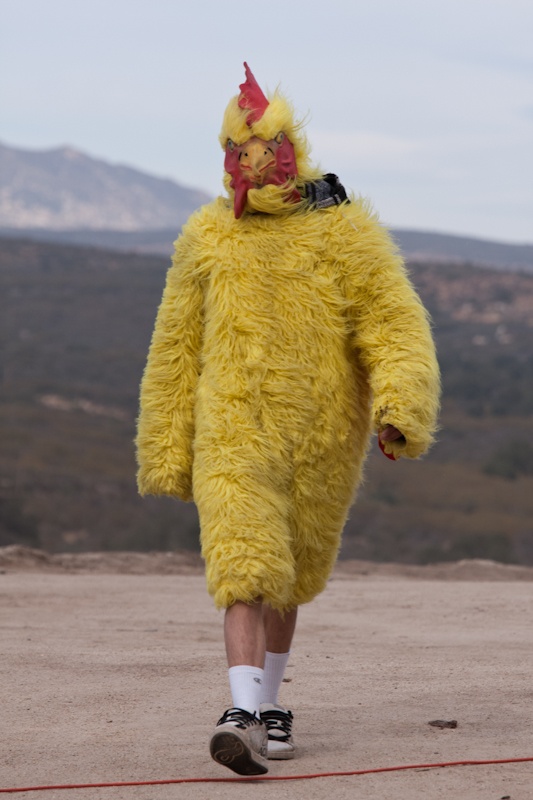 The Chicken Man waiting out the winds 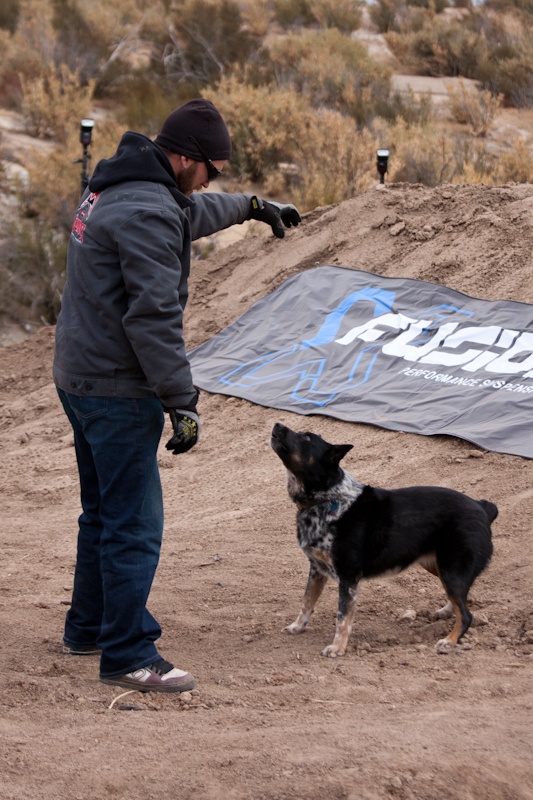 The decision was made that it was too windy and far too dangerous to run finals so it was canceled. Results were based off Day 1 with Sean "Griz" McClendon taking home first place. Griz built the jumps and showed that he was the big man on campus, Congratulations Sean! 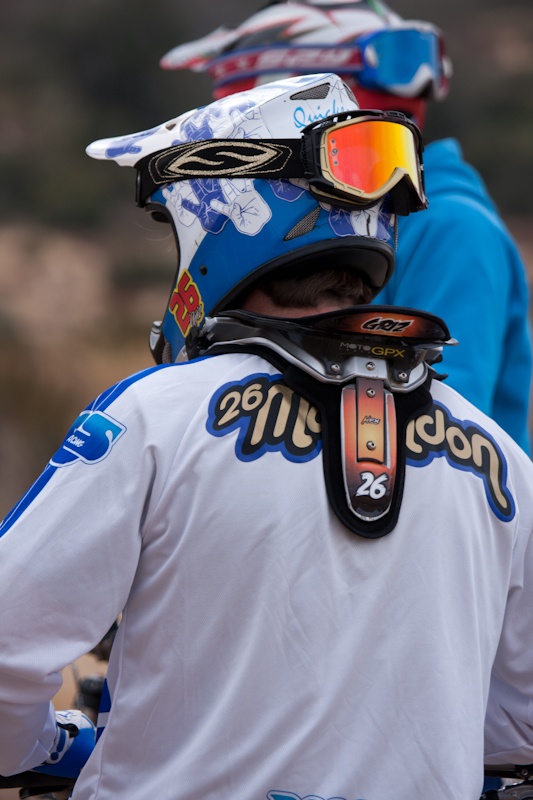 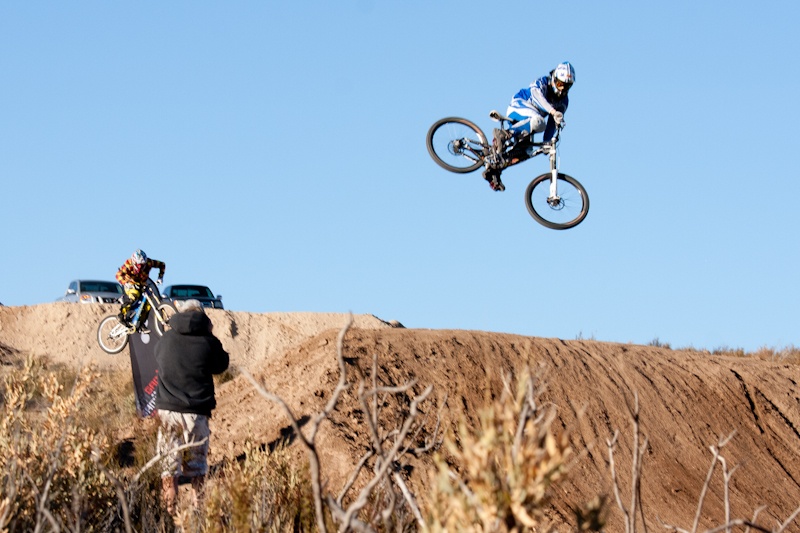 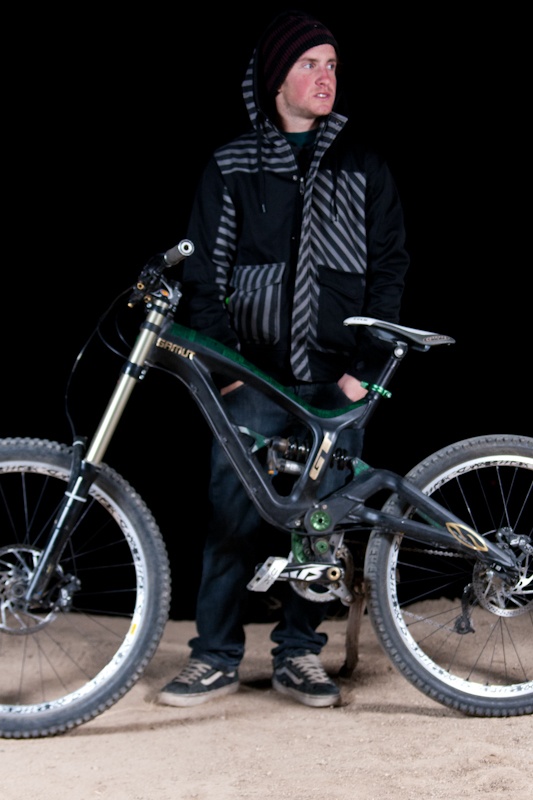 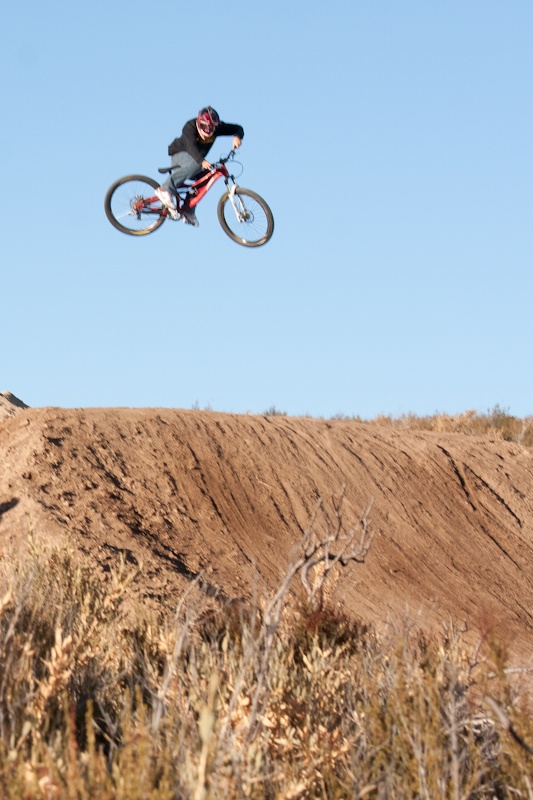 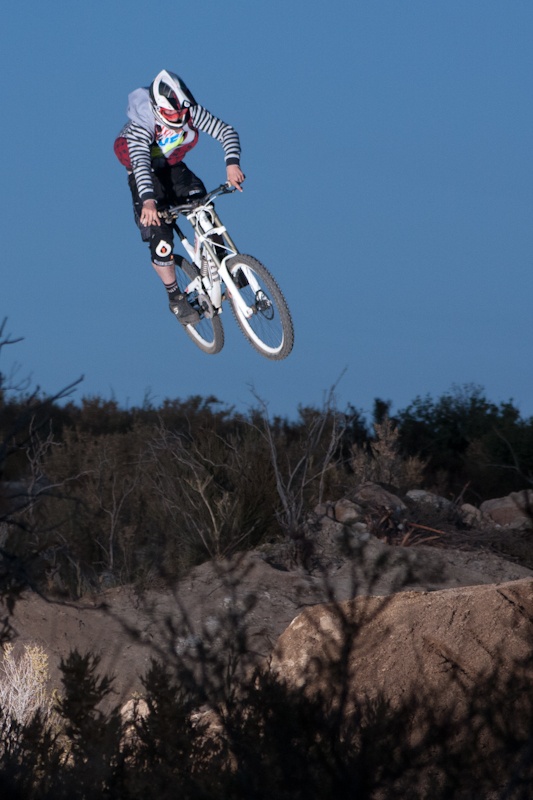 John Hauer
Big thanks to John from X Fusion for putting the Side Flight Champs on, and to Griz for building the coolest DH jumps I have ever seen. Rumor has it that this event will be back next year, If that's true, I will see you there!

j-peters (Dec 7, 2009 at 16:25)
"The aim for X Fusion's Side Flight Championships was to see riders doing big whips on their downhill bikes, over really big jumps."

thestigmk1 (Dec 7, 2009 at 15:09)
I would enjoy both giant slalom and a whip contest. Don't do away with a proper mountain bike orientated race, MTBing already has enough motocross influences without whip contests.

suicidedownhiller (Dec 7, 2009 at 15:42)
Slalom is basically an MTB supercross race...So i wouldn't consider it a MTB oriented only sport. But yeah, do both!

maximumradness (Dec 8, 2009 at 21:40)
if you want less wind,, then you gotta get up to the pac nw, and hit that kinda stuff in the woods. ima be right back while i go build those jumps! so radical. its seems like there should be MORE fmx infuence in mtb. whats wrong with that. bmx is bmx, mtb should go this bigg always!!!

kev1n (Dec 7, 2009 at 15:50)
such a shame that the wind became such a big factor... great competition, its like the downhiller's version of slopestyle

cazneaux (Dec 8, 2009 at 17:13)
They should have the technology to make some pretty good ones. They should make some alright ones so they get the design down, then once they figure it out, Make some DH killers! Can't wait for them to come out with it. X-Fusion is a tight company.

craigmclennaghan (Dec 8, 2009 at 13:35)
is it just me or does tyler mccauls bike have a pretty high bottom bracket and just high in general or is that the way the bike should be ? i mean compared to mik hannahs and mark beaumonts it looks a lot higher and shorter

iggz (Dec 8, 2009 at 15:00)
It wasn't well deserved at all hahahah the contest never even happened... winning something for practice runs is kinda lame

impacking187 (Dec 7, 2009 at 17:25)
you know its f*cking windy when the turbines up there are spinning. overall, it looked kinda weak. and wheres vanderham?

bigtard (Dec 7, 2009 at 16:16)
I'm sorry. but if this was a jam to see who could get it sideways. then why were most of the pictures not really all that sideways?
i mean there were a few that were ok.
but not really
seriously, i can whip it better than that.
and i'm old and washed up
nice table tyler, that was sick
but all the rest of you. try harder, you're supposed to be professionals

mtbsrule (Dec 7, 2009 at 16:54)
did you watch the video? cause they were getting extremely sideways.
and you say you can get more sideways then them? can you do that on a jump as big as that one?

bigtard (Dec 7, 2009 at 16:59)
i didn't watch the video. i was more wondering why none of the pictures don't do it justice just trying to get people talking anyway

brule (Dec 7, 2009 at 17:02)
I'm trying to figure out why the shots don't feature a lot of rad whips either, but I guess it comes down to timing a good shot. Maybe the shooter missed some bangers, but the video is a good idea of how things went down.

PearlJamSoCal (Dec 7, 2009 at 19:41)
The weather was horrible, there were gusting side / front winds up to 35mph and blowing sand on the day of the event. It was a miracle that that anyone even cleared the gaps on Saturday. All of the pro's were really trying to put on a show on Saturday but pedaling full speed - biggest gear into the first set the wind was still making them come up short.

j-peters (Dec 8, 2009 at 10:50)
I was saving shooting the whip jump for finals day because I knew the bigger more gnarly whips would be done in finals. Finals Never took place.

seanyboy760 (Dec 8, 2009 at 12:50)
I got some pretty good looking shots on practice day also which i will be uploading here shortly. Take a look at them everyone let me know what you think!

dtroyan123 (Dec 8, 2009 at 15:56)
Gravityjunkie47 you should make good on your warranties and make better products. i had a velvet on my hardtail and broke it riding street just like the ad in decline magazine. you guys said too bad, its not for street riding. oh wait thats what you show in an advertisement. hmmmm false advertising maybe. can you explain this to me