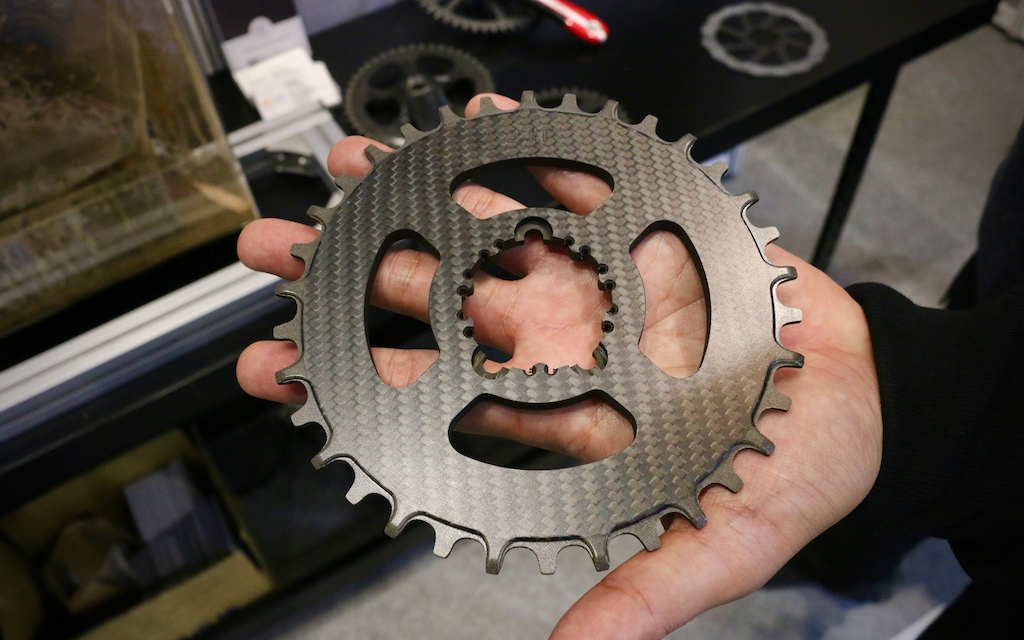 Carbon fiber chainrings might look like they're from the future, but it's something that's been done before with limited success. As you'd probably guess, having a steel bicycle chain running over teeth made of carbon fiber doesn't end well in the long run, but Digidirt says that they have a solution. The answer, I was told, is a special metal coating on the narrow-wide teeth that's said to prolong their life to match that of an aluminum 'ring.

Coating carbon with a thin layer of powdered metal is being done in other industries and a proven tactic, but it'll be interesting to see if Digidirt has the answer for us mountain bikers.

Weight? It's low, of course, with the mountain bike versions coming in around 25-percent lighter than an aluminum 'ring of the same size. Cost? It's high, of course, but not as high as you might think. If you want a new one from SRAM, expect to pay around $100 USD, and if you want a carbon 'ring from Digidirt, it'll cost you about $150 USD, depending on the size. The version pictured here sports a SRAM direct mount pattern, but there are all sorts of other mounting options as well. 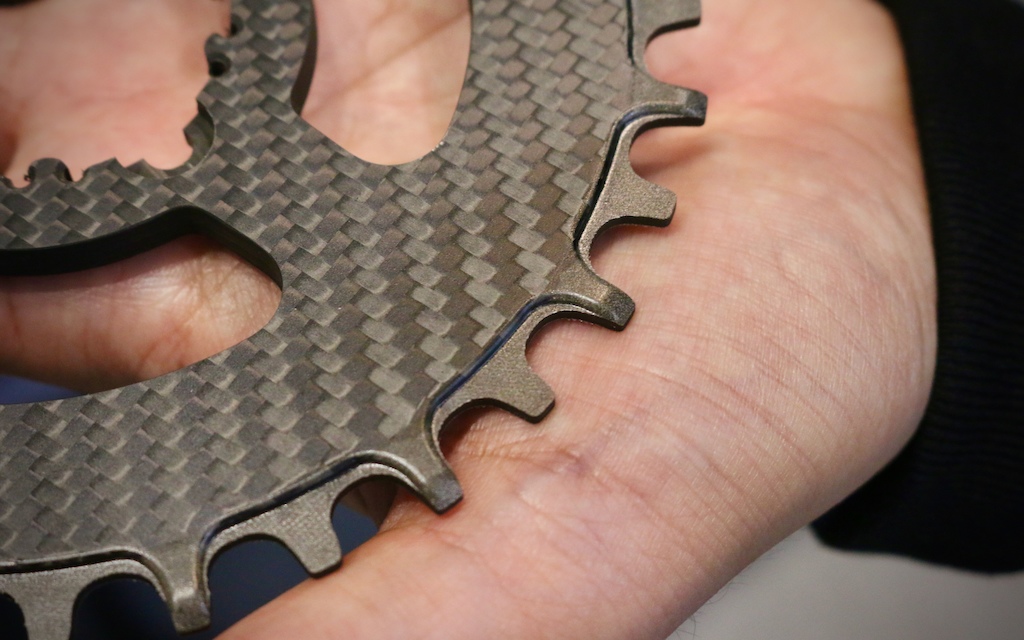 See that grey coating on the narrow-wide teeth? That's said to prolong the 'rings life to match that of aluminum chainrings. 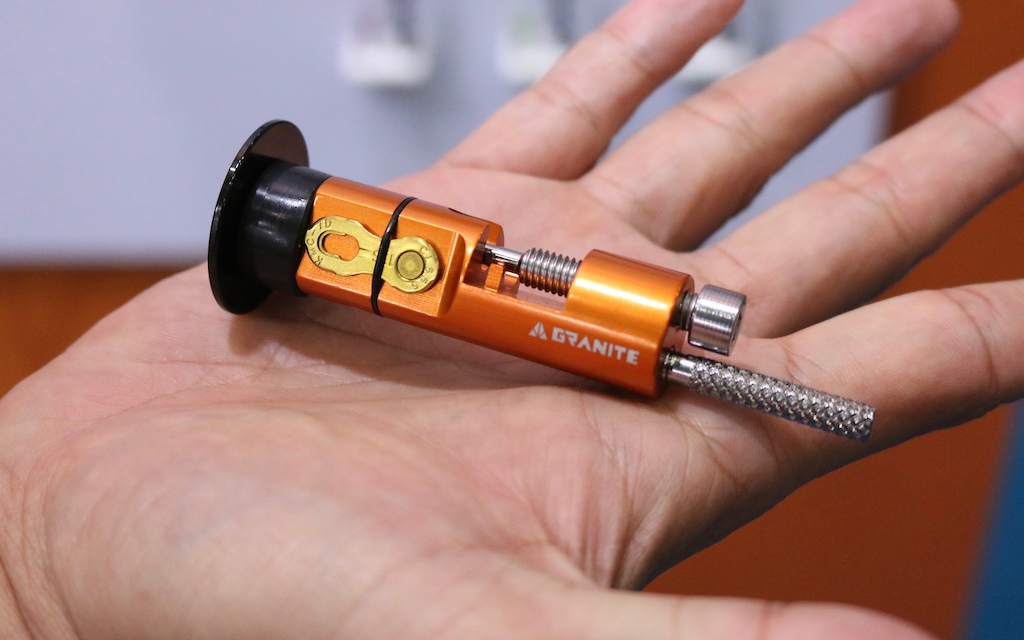 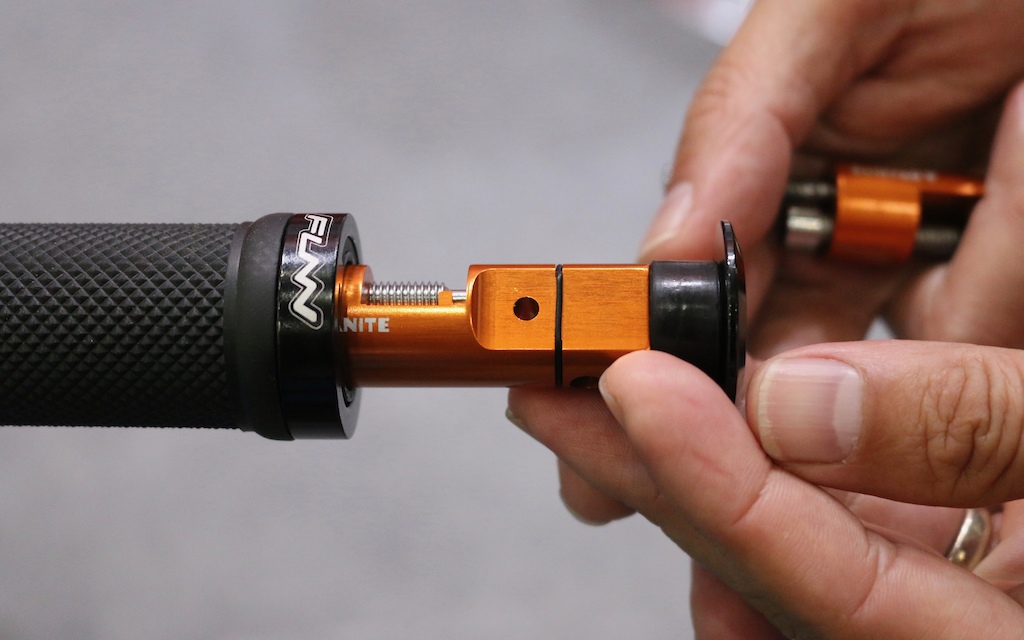 Granite's new chain tool plugs into the end of your handlebar until you need it.

I'd rather spend all day walking out of the bush than wear a backpack and judging by the number of tools (and bikes) with clever storage options popping up, I'm not alone in that thinking. Granite's catalog is full of small but useful items, and their new $24 USD chain tool slots right into that category. It's a pretty simple unit that slides into the end of your handlebar, with two different versions depending on the style of grip you're using.

It stays put via an expanding rubber section, the tool's handle slides into the anodized body, and an O-ring holds a spare quick-link in place until you need to be saved. You will need a hex key to operate it, though, and that's not part of the kit... Something tells me that Granite will soon offer another pint-sized tool. Maybe it'll go into the other end of your handlebar, too. 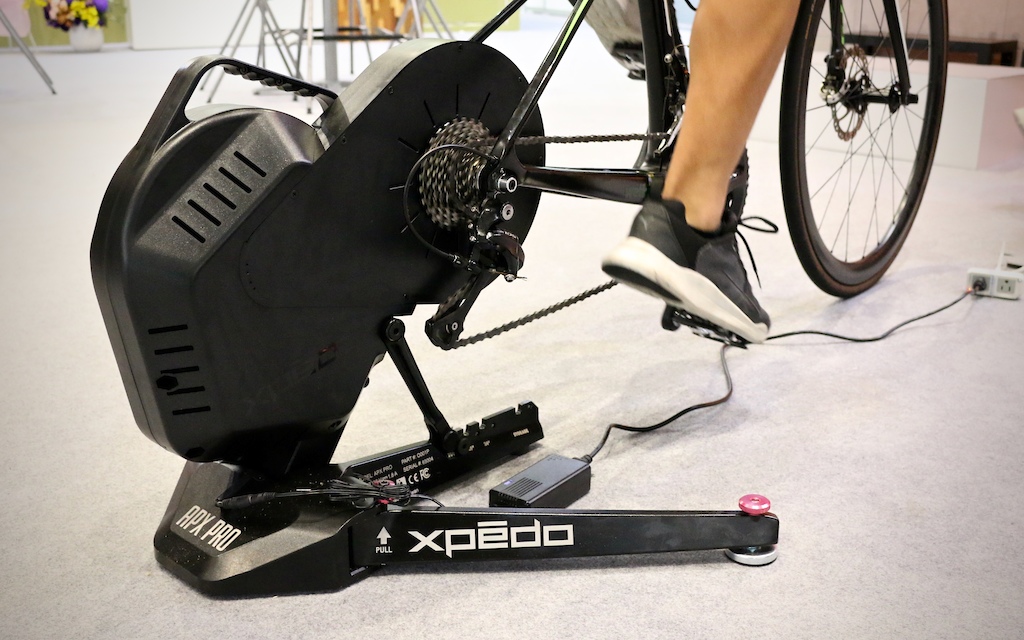 Xpēdo is probably best known for its massive range of platform and clipless pedals, not electronics, which might make the debut of their APX Pro direct-drive trainer all the more surprising. It's not completely out of left field, however, as Xpēdo first dipped a toe into the power game back in 2014 with their stillborn Thrust E power meter pedals. But with virtual training apps being popular with riders who take their fitness seriously, they're jumping right into the deep end of the pool with their new APX Pro smart trainer that will end up selling for $1,100 USD when it hits the shelves. That's a load of money no matter how you slice it, but it's also a bit less than many other options out there.

Before you head straight to the comment section to shit on smart trainers showing up here, know that the APX Pro is compatible with your mountain bike's thru-axle, as well as all the usual other setups out there. So yes, you can likely use your rig on this torture device, and because it's a direct-drive design, all you'll need to do is drop your bike's rear wheel out and replace it with the trainer that you've already installed a cassette onto.

The electromagnetic resistance will fight you all the way up to 2,000-watts if you want it to, or you can run it with manually adjustable opposition if you want. Xpēdo says that it's pretty quiet, too, emitting 68 decibels when you're holding 200-watts, which is about equivalent to having a loud conversation with a friend. 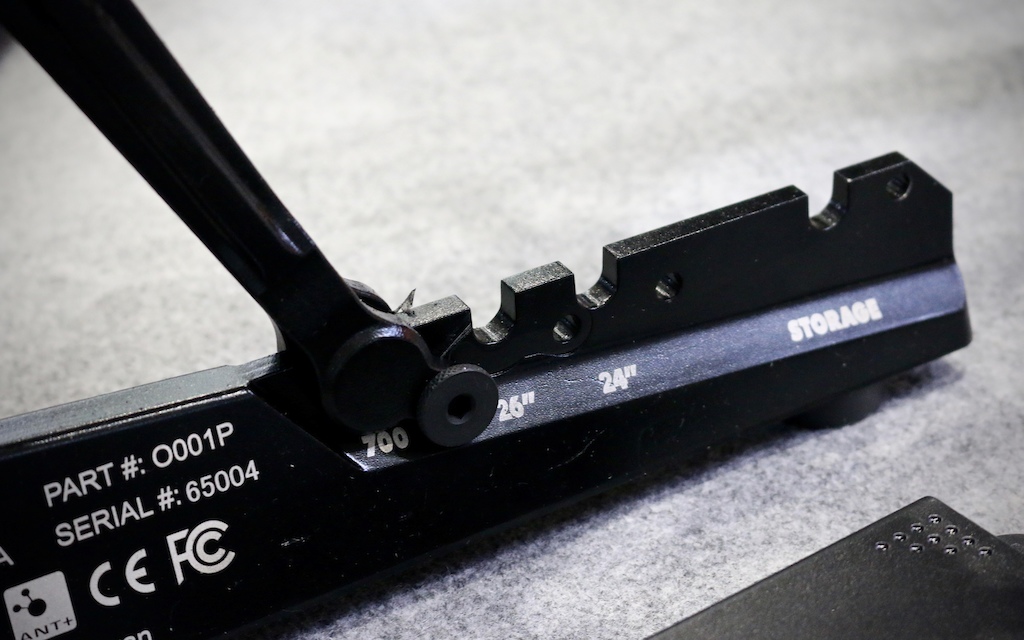 You can use the APX Pro with all the usual wheel sizes.
There's a sturdy looking aluminum base with legs that spread to 30'' wide, but more interesting is the 5-degrees of side-to-side float that the trainer is said to offer to make things feel as realistic as possible.

ChazzMichaelMichaels (Mar 29, 2019 at 2:54)
I'm the opposite with packs. With more than one bike I don't want to set off with one that may or may not have the multitool in it. Camelbak has my water and all the spares and tools I need.

flipoffthemonkeys (Mar 29, 2019 at 6:11)
impossible to put a folding saw in your handlebar. yes, i carry a folding saw to clear trails, you're welcome...

hg604 (Mar 29, 2019 at 6:21)
Ditto. I also dislike water bottles. Remember when Camelbaks first became a thing and everyone was like "oh this is so much better and more convenient than water bottles"... yet now everyone's trying to solve that solution with more gimmicks, clip-on crap and "innovative" ways to slide a tool inside anything and everything hollow.

mtbschrader (Mar 29, 2019 at 6:32)
Yep. Either close to car trail rides with just a water bottle were you can walk back if needed or take it all with you in the pack for me.

you have such tender sensibilities...

flipoffthemonkeys (Mar 29, 2019 at 9:53)
PS-i used to ride with a guy who strapped all his crap to his bike. i got so f*cking tired of watching that idiot faff about with his sh*t that i don't ride with him anymore. f*ck that guy

tacklingdummy (Mar 29, 2019 at 11:16)
I spent a lot of money making my bike lighter. The last thing I want to do is make it heavier by adding a water bottle and a lot tools to it. But if you don't care about weight, the tools are cool.

RoverDover (Mar 29, 2019 at 14:55)
i got a multitool to the ribs last year, i am try to offload my tools to my bike where they wont injure me if i fall on them. i like the protection of a Hydration pack and filling it with hard, pointy tools compromises this protection

dutflip (Mar 29, 2019 at 20:50)
@flipoffthemonkeys That would be an amazing add on for One up EDC pump make a saw that fit there pump or steer tube

h82crash (Mar 29, 2019 at 6:21)
Finally a replacement for that boat anchor aluminum chaining thats been bogging me down.

Bustacrimes (Mar 29, 2019 at 2:52)
A "normal" ring gives you warning signs its on the way out - would this be more prone to catastrophic failure leaving me stranded in the middle of nowhere? Any one got some experience? Not bothered about the weight saving here.

Not a fan of adding stuff to the bike. I usually ride for 3-5 hours minimum and dont have a swat box - so i cant fit my sandwiches, spares, tools and big bag of stoke in the crevices on my bike. Would also prefer a larger tool for getting some torque on the bits, so happy to use my Evoc pack. I dont see the issue here, buy a good one and the fit is great. If youre riding the park all day then you dont even need bar end tools to be honest.

f00bar (Mar 29, 2019 at 3:04)
my experience with alloy chainrings ended with me switching to STEEL chainrings... for 1/3rd the price of a single alloy chainring, it lasts 3 times longer... I'll happily deal with those extra *30* freaking grams

markg1150 (Mar 29, 2019 at 3:37)
Given how much horse power us humans can put out I'd put it at about zero as long it's been made correct. Racing/super cars can have carbon fibre drive shafts with no problems.
Casing it and landing on the ring would be better than a soft alloy one and about equal to a steel one.

Much as I like carbon and im a bit of a weight weenie I'd take steel rings everytime. The longevity of them is brilliant compared to alloy or these carbon ones.

gibbon-on-an-orange (Mar 29, 2019 at 6:54)
@neimbc: That's a sintered carbon-ceramic compound, abbreviated to 'carbon' brakes. The carbon brake rotors that have been released for MTB have quote literally just been cut out of basic 2x2 weave CFRP plate/sheet, like the chainring in the article, which for a braking surface is never going to be good.

CaMKii (Mar 29, 2019 at 9:47)
@gibbon-on-an-orange: Yup, you have roadies switching to discs en masse to escape the shit braking performance of carbon rims.

beeboo (Apr 1, 2019 at 10:53)
I really like Granite's new chain tool. It’s simple yet effective! The ability to store tools in your bar ends, steer tube, crank axle, and in your wheel axles is mind blowing ingenious


is the bike industry even trying any more?

CustardCountry (Mar 29, 2019 at 14:40)
Just wondering if it's noticeable having a tool in one end of your bars? I know people who whinge that they can tell if their bars are a tiny bit misaligned.

Serpentras (Mar 29, 2019 at 3:45)
You talk about weight savings and then you need a chainguide anyway because X-Sync 2 is superior to normal NW profile. Good one , not.

WAKIdesigns (Mar 29, 2019 at 3:41)
@Konyp: I know they exist. Many Darwin Award Certificates are hanging on those bolts

Simple: you replace it

I feel like it would just splinter, even with that special coating!!!