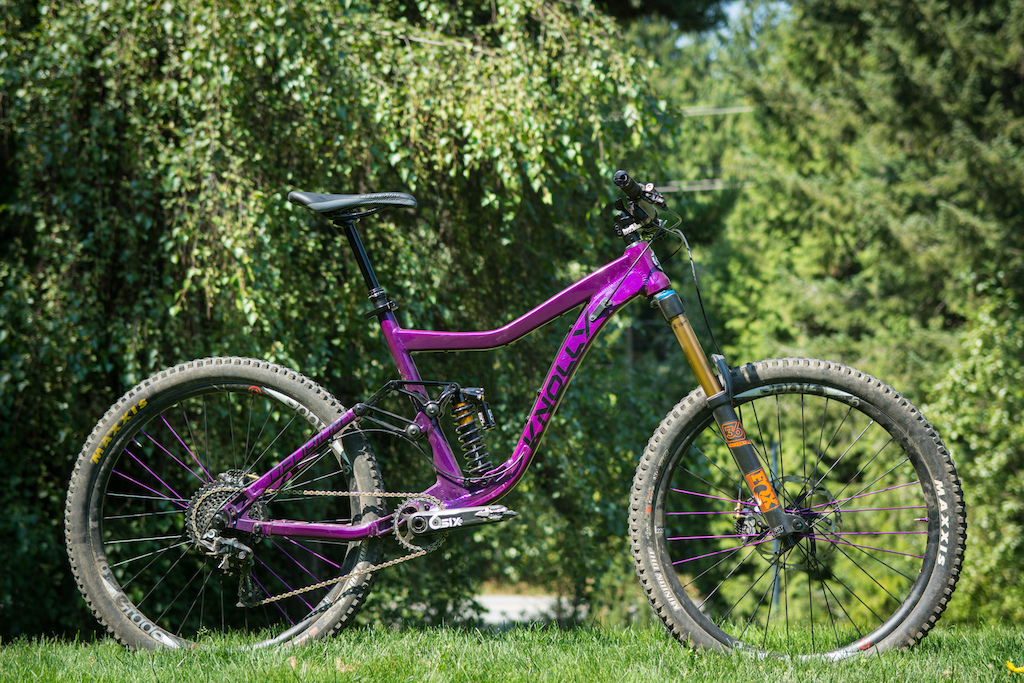 The new long-travel Delirium enduro bike from Knolly was hiding in plain sight at the Cane Creek tent. No hard facts are forthcoming until the official launch at Eurobike this month. Knolly has reached out to Asia for its aluminum manufacturing and the construction appears to be even better than the bikes they made in North America. The welding looks like the perfectly spaced silvery fish scales of vintage Yetis. Rectangular frame tubes, as well as the suspension's CNC-machined 4 x 4 linkages are true to the original Knolly designs. Suspension was shared between Fox and Cane Creek, with a Float 36 up front and a DB Coil out back. Wheels are 27.5 inches. Weight seemed around to 30 pounds and the bike's profile suggests that Knolly has lengthened the cockpit, while keeping the stays short and its head angle near 66-degrees (all educated guesses). We will fill in the blanks when the official press release arrives. 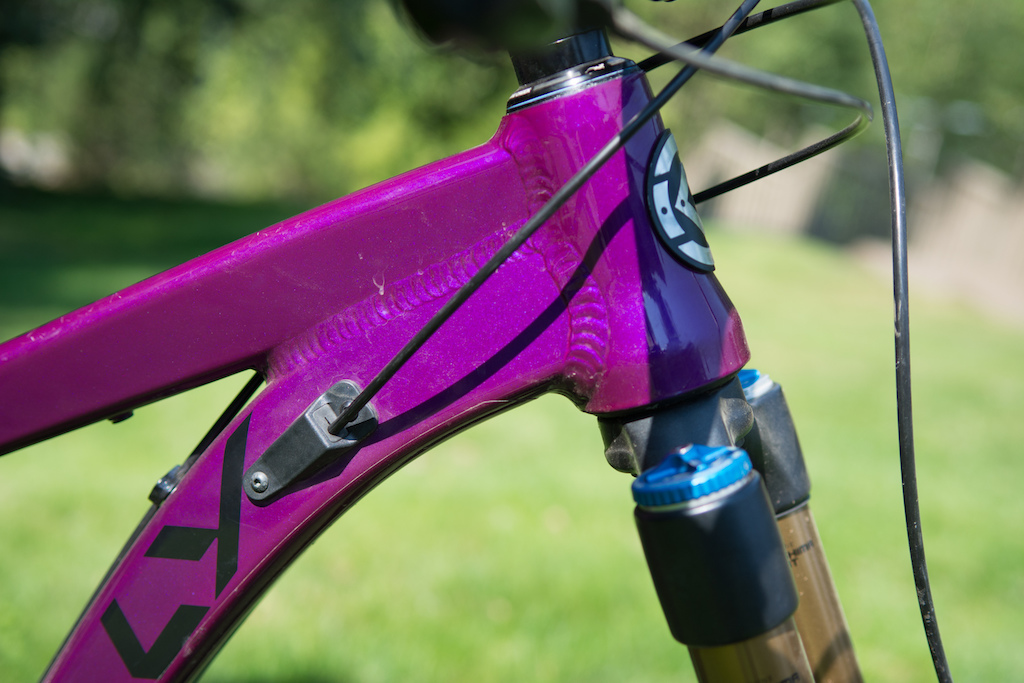 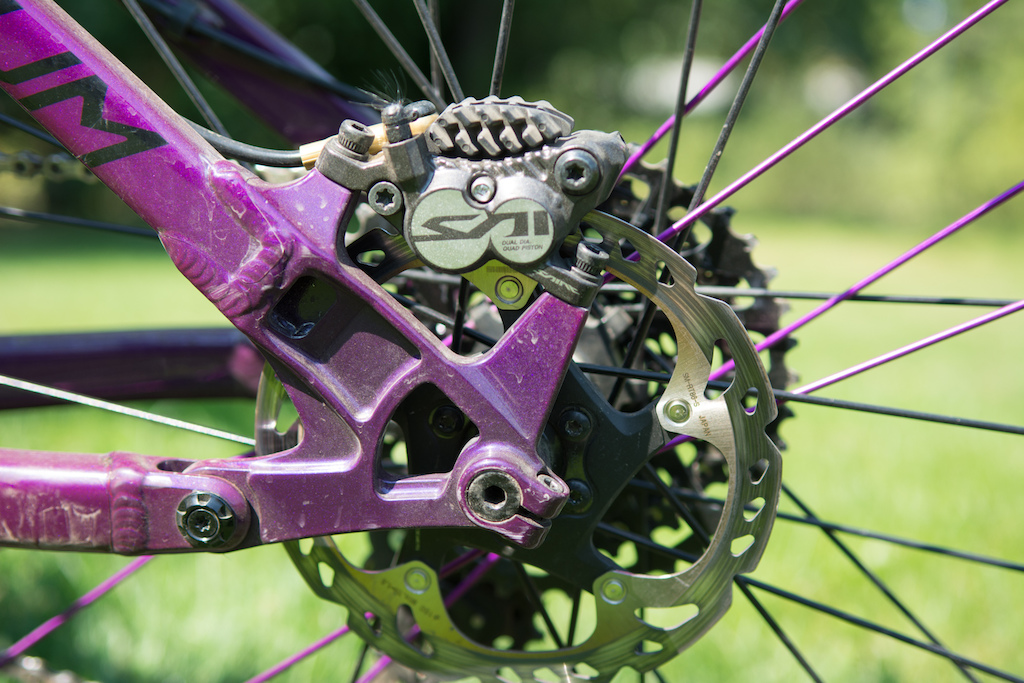 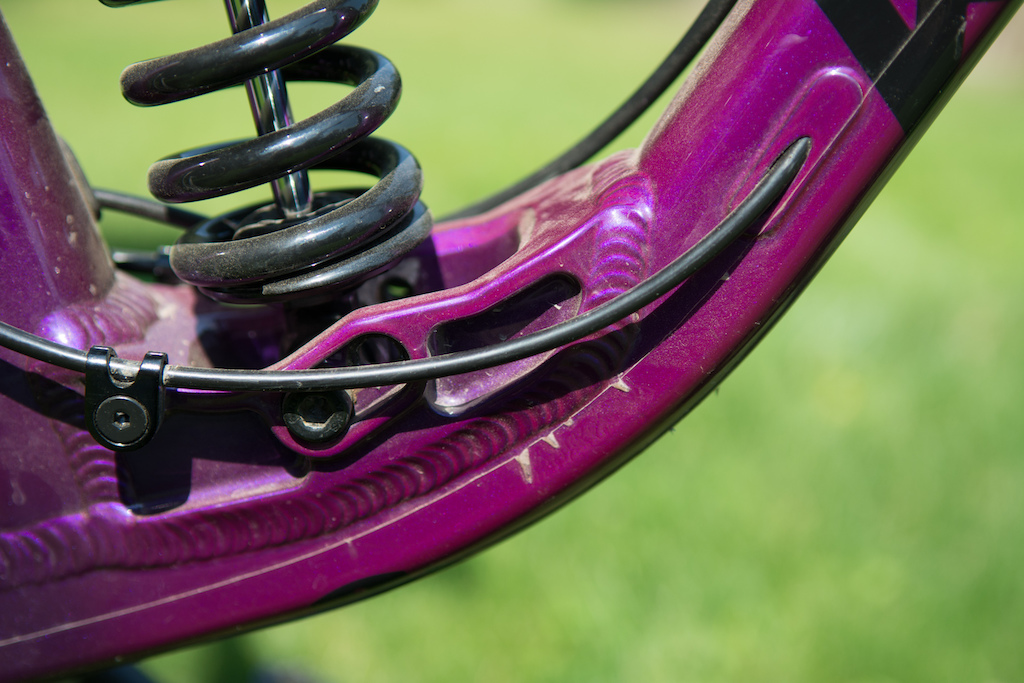 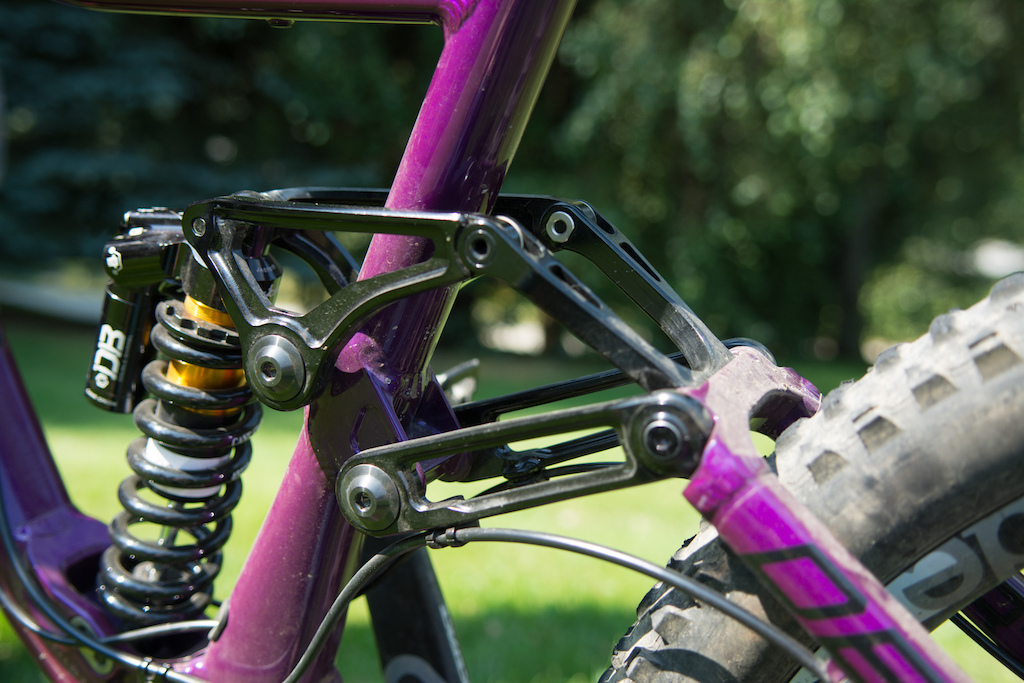 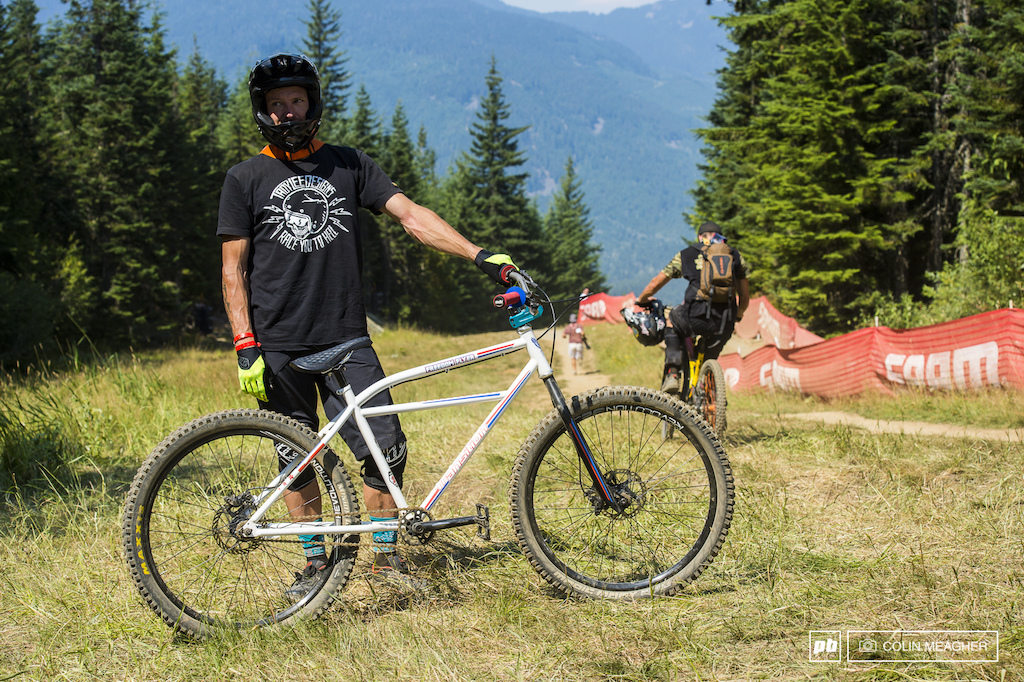 Lars Sternberg entered the Crankworx whip off competition (held on the infamous Crab Apple Hits DH run) on an unsuspended steel-framed klunker. Sternberg also starred in a video edit earlier this week that documented the wild man's exploits as he shredded the park riding the same bike. Sternberg said that his bike, the Transition Freedom Flyer, held up fine, but he burned through three handlebars during the festivities. Evidently, landing impacts were too much for the cross-braced steel bars and they bent or cracked near the junctions of the brace. Animal! 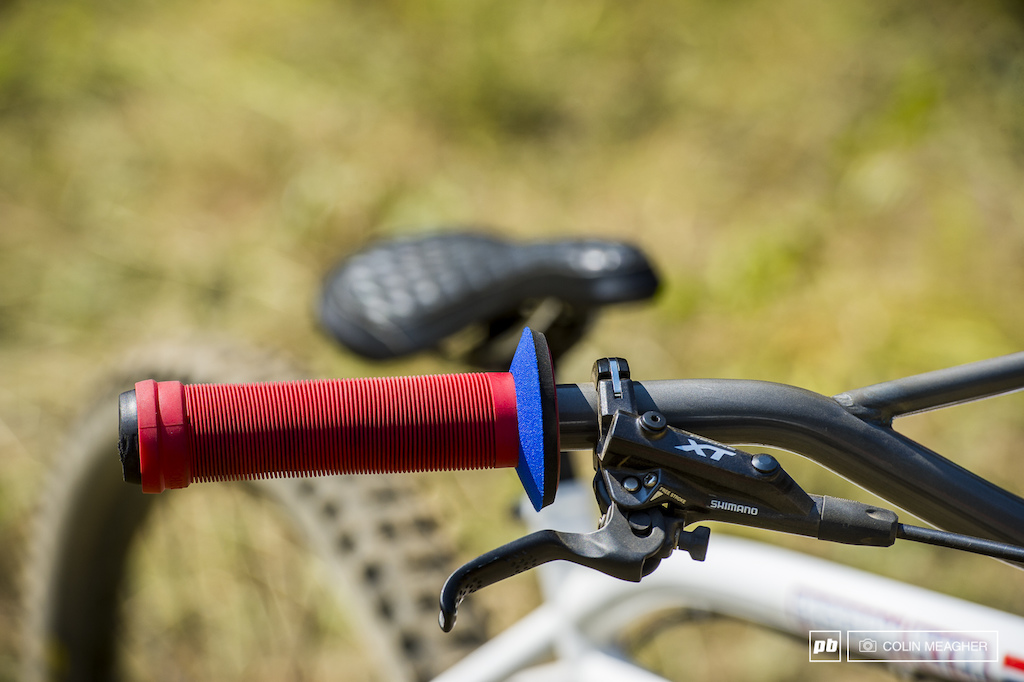 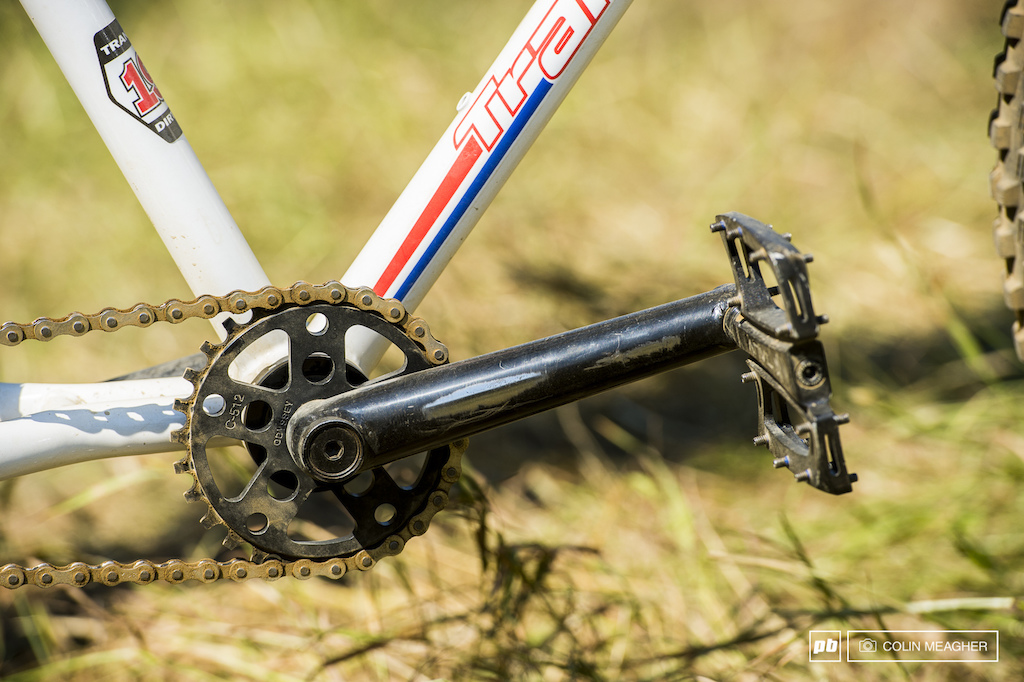 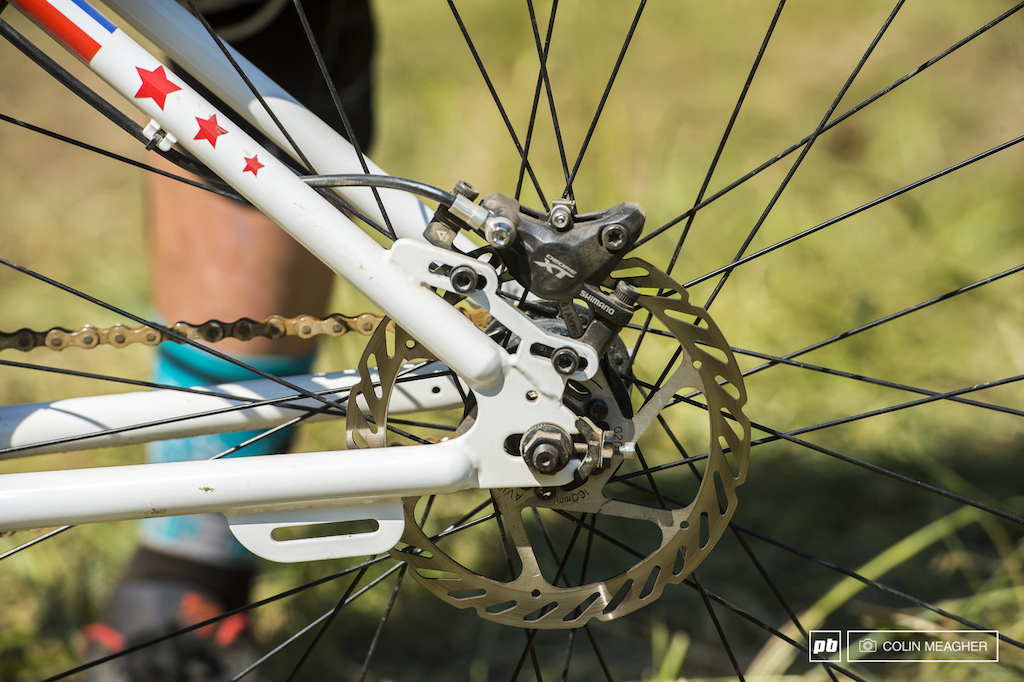 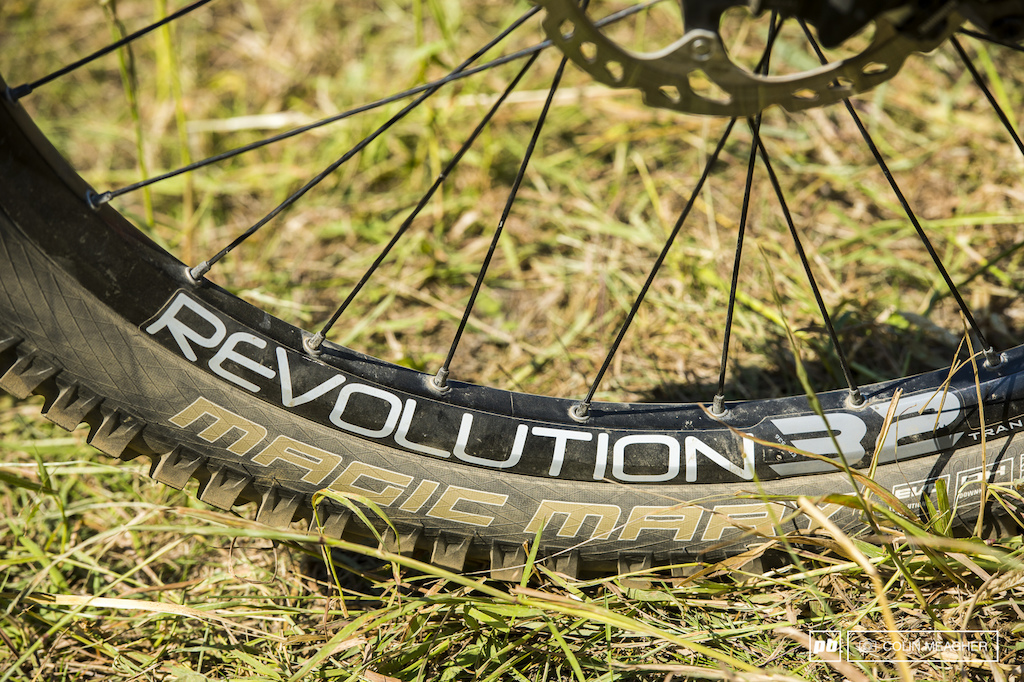 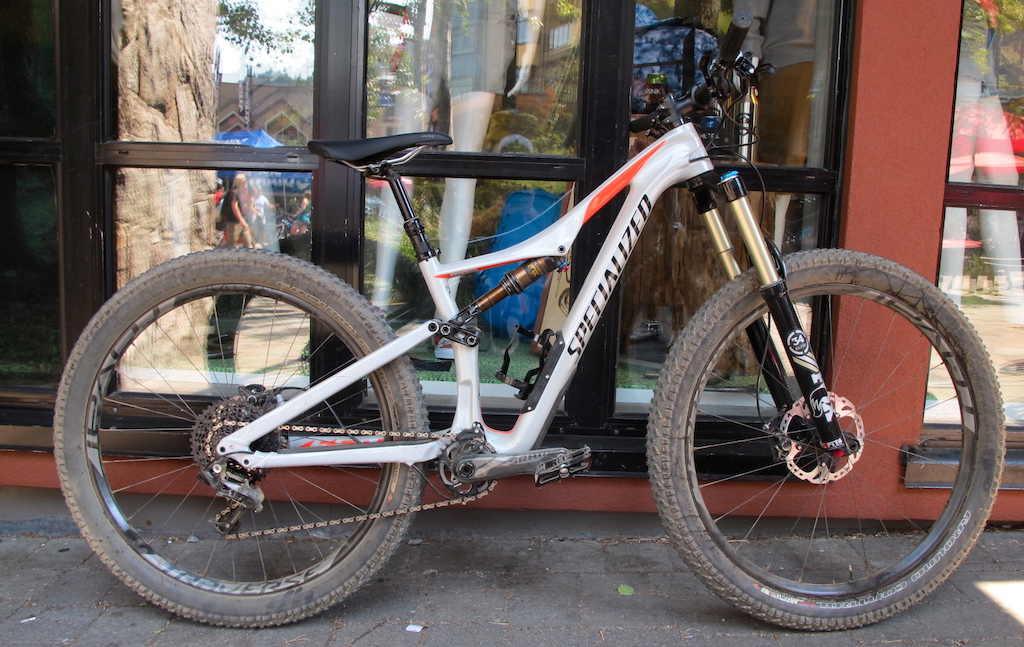 2016 Specialized Rhyme FSR Expert Carbon 6Fattie is an elite-level 27.5-plus trailbike that will slate into its female-specific bike range. Travel is 130mm/rear and 150mm/front, and it shares the same carbon frames and sizes with the male version - with some of its cockpit accessories modified for smaller framed people. The MSRP is expected to be $6500 USD. Tyler Maine photo 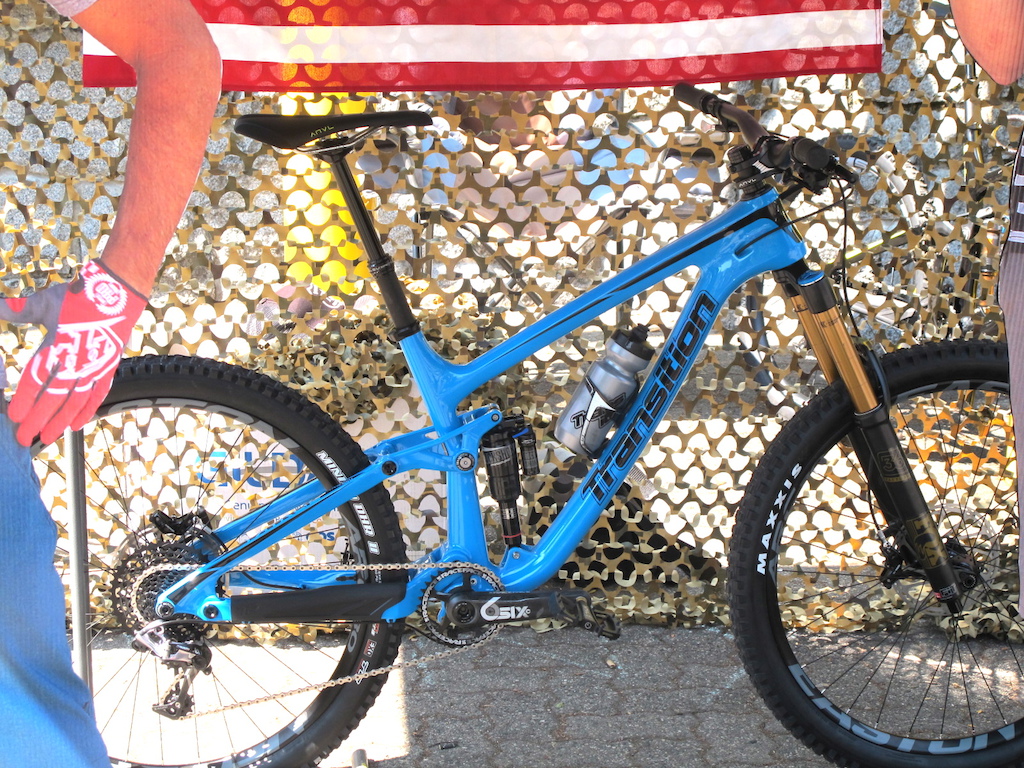 Transition's carbon fiber Patrol in all its glory, closely guarded by some excellent paint ball targets. Tyler Maine photos
Transition made news with its aluminum framed Patrol, a 155-millimeter AM/enduro-class chassis that has garnered a reputation for shredding features and steeps. After riding it, the first question that came out of our mouths was, "When will the carbon version appear?"

When we approached their tent, it appeared that everyone who worked at Transition was there to welcome us. To our surprise, however, the crew had propped up cardboard copies of themselves and were out on the mountain doing laps on the jump lines. We spied a beautiful carbon fiber Patrol leaning against the back wall, completely unchaperoned and decked out in baby blue. With nobody around to say nix, we popped off a quick spy shot of the bike for your viewing pleasure. 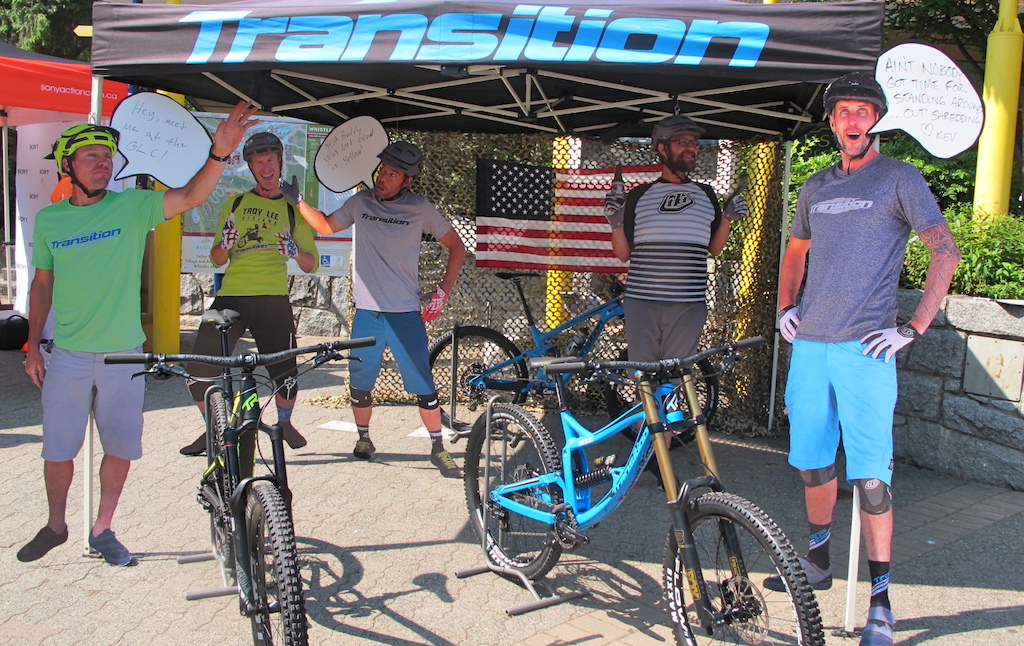 Transition's employees left cardboard models of themselves to stand guard over their tent at Crankworx Village while they spent most of the week riding the park.

Posted In:
Reviews and Tech Crankworx

Rockmonkey (Aug 15, 2015 at 14:07)
The Scout is the best bike I have ever ridden. I would be quite tempted to upgrade to a carbon one when it comes along.

LoneRiderOfTheApocalypse (Aug 15, 2015 at 13:41)
A $6500 female-specific full carbon fatbike? Specialized will sell literally two of those.

deeeight (Aug 15, 2015 at 17:31)
No, a female specific Plus bike. They're calling them 6Fatties but they're neither 26ers nor fats. Tires aren't wide enough for it to be used as a fat bike, and the diameter is in the upper 28 inch range.

taletotell (Aug 16, 2015 at 8:07)
I bet they sell a lot. Plus bikes are especially appealing to wealthy hobbyists.

deeeight (Aug 16, 2015 at 8:20)
Fat bikes alone already outsell all gravity-oriented (so DH,FR,Enduro,Slopestyle,dirt jump, etc) bike categories combined and plus bikes are shaping up to outsell fat bikes in a year or two. You can negative that fact all ya want but its an industry fact of life that gravity oriented categories are generally money losers in sales and are only pursued for the advertising value.

toooldtodieyoung (Aug 16, 2015 at 9:38)
@deeeight the "six" is for 650B and being plus sized, they are fat(ish). Specialized almost has their own language when it comes to their bike names. I think the idea is that six fattie almost rhymes with six fifty if you stretch your imagination a bit.

WAKIdesigns (Aug 15, 2015 at 14:22)
You see Lars ripping it on a clunker and you still think: I need carbon to be that good. Every tenth of a second counts. Youuuu Idiot.

WAKIdesigns (Aug 15, 2015 at 15:17)
Yea put tubeless tyres on carbon rims on a frickin' Klunker and experience a new level of clunking... that sht would make more noise than two skeletons screwing on a metal roof.

tobiusmaximum (Aug 15, 2015 at 16:00)
I wasn't serious. He broke his three times? Sounded like a worse reliability rate than a carbon-fearing sorts worst nightmare.. Nevermind.

blinkpike (Aug 17, 2015 at 0:24)
@tobius - His problem wasn't the bars really, it was the rigid fork. I used to break and bend stuff all the time back in the 90s before I got a suspension fork. Forks, bars, cranks, BB spindle, wheels, etc. Almost gave up on MTB entirely. Got a squishy fork, stuff stopped failing.

tobiusmaximum (Aug 18, 2015 at 13:38)
It's all good bud, I get it. I was only making a connection between Lars breaking three sets of bars and waki stating carbon is unneccesary. It was tongue in cheek. But three f***wits didn't grasp that it seems. And they say IQ isn't going down...

Mattin (Aug 15, 2015 at 14:39)
Clunker dude should have bought some decent FGFS bars. The only reason he bent his is because he ran shit bars. Most FGFS bars would last for years. Nothing wrong with steel crossbar bars, look at how freaking big many bmx riders go on those types of bars. Don't blame the category of bars, blame only the shit bars you had Other than that, that clunker bike looks like so much fun with these disc brakes mounted!

pedaldragger (Aug 15, 2015 at 21:20)
Yeah well, the trannys on the lines you are talking about are really steep.....
You ever ridden the crabby line?
Not really much forgiveness there.
Carry on

Renthal braced Moto-X bars would have been perfect on that clunker!

blinkpike (Aug 17, 2015 at 0:31)
His bars bent because of the rigid fork. With nothing to cushion the impacts, parts fail. I'd be amazed if any bars could survive Whistler on a fully rigid bike. You might get away with a rigid bike at low speeds on nicely manicured trails, but not ripping down on DH trails.

Narrow BMX bars would probably have the best chance (because less leverage), but how miserable would that be?

Mattin (Aug 17, 2015 at 5:15)
Untrue. I've been riding rigid forks for many years on a semi-pro level for street. As long as i had decent bars it didn't matter. Even rode some alu bars for 2-3 years without any problems. Also bmx riders have no suspension either and often go very big.

Mattin (Aug 17, 2015 at 5:17)
It would indeed feel miserable on dh but decent bars would easily last 2 seasons on rigids

chocolate-thunder (Aug 17, 2015 at 7:03)
@Mattin: So what you're saying is "yes, yes I am new."
I'm sure there are better bars out there, but what Lars put that bike through at Whistler is not comparable to any BMX or any street riding. Period. It's okay that you don't know what Whistler is like because you haven't ridden it, but dude, what you know about riding street and BMX just doesn't apply to Whistler. Riding the park at Whistler is a DIFFERENT SPORT - the only things that might be shared between disciplines are grips and pedals, maybe. Really, you should make a trip so you can gain some perspective, it's awesome. But bring the Stinky, and be prepared for it to break.

Mattin (Aug 18, 2015 at 1:10)
Its rather the other way around. I've ridden some decent DH trails all over Europe during trips in the summer (for example Bad Wildbad and Hinterglemm pro line). I would never want to ride that on rigids, but that doesn't mean it is so much harder on your bike. Many bmx riders nowadays are doing 3m high 360 drops to flat(!) on a daily base and can ride their bars for years. You guys apperantly have no idea what kind of impact street brings to your bikes and how big many bmx cyclists huck.

It is indeed a different sport, but the fact is that Lars rode shit bars and blamed it on the category (falsely) instead of on his shitty model.

Mattin (Aug 18, 2015 at 1:12)
Average DH bars didn't even last 6 months underneath me. Just to give a comparison about how much street abuses your bike.

davecheng (Aug 15, 2015 at 12:54)
The Knolly looks like it has a prototype DB Coil CS (climb switch), also to be officially launched at Eurobike.

davecheng (Aug 15, 2015 at 15:04)
The "extra stuff" above the concentric compression/rebound adjusters looks a lot like a prototype shock I saw from Cane Creek a few days ago in the village (here, with a standard DB Coil for comparison):

Regardless, I'm excited at the possibility of a DB Coil CS!

Callum-H (Aug 15, 2015 at 20:54)
All you need to make one is a DB AIR CS and a DB, because the dampers are the same, so you take the damper part of the Air CS off and put it onto a DB Coil, so that you end up with a DB Coil CS and a DB Air, there is no need for prototyping because it is simply putting an existing part onto another one, because it all fits together.

NastyRider (Aug 15, 2015 at 18:58)
I agree ...been riding an alloy one all season. Great bike park bike...but pedals well and descends great.Looking forward to the Carbon.

paulwatt (Aug 15, 2015 at 13:20)
Damn! Worst thing about already having a bike I really like is that it's harder to dream of having either that Patrol or the Delerium! Sickness!

kookseverywhere (Aug 15, 2015 at 14:59)
It's unreasonable how much I want that Knolly just based on the fact it's purple

tobiusmaximum (Aug 15, 2015 at 13:32)
So, bike boffins, what's the slotted tab/fin under the chainstay for? Probably gonna kick myself for this one...

jmrbauer (Aug 15, 2015 at 13:46)
more specifically its for the brake arm, actual coaster brake is in the hub. keeps the wheel straight, otherwise the force from a coaster brake would pull the wheel sideways. didn't know what it was when i got an old coaster bike and took it off, my tire was rubbing the chainstay after 1 stop.

iamamodel (Aug 15, 2015 at 14:06)
I'm pretty sure it is to counteract the braking forces. When you apply the brake, the outer part of the hub is braked against the inner part, so the inner part wants to keep rotating. Without the brake arm (which is attached to the inner part) there would only be the axle bolts preventing the inner part from rotating. It is long so that it is a longer lever.

lobohusky (Aug 21, 2015 at 9:56)
Want shredded forearms with bulging veins? Put down the dumbbells and buy a clunker. Lars' arms are freakin' jacked! Gotta be to be breaking 3 sets of bars like that.

sledMXer (Aug 15, 2015 at 15:30)
I think that is just a line from the clear plastic masking to protect the paint. They have it on the underside of the downtube too. I put it on my bikes to save the paint on both the seatstays (from heel rub on my shoes), and on the downtube to protect from rock spray off the front wheel.

mbrand721 (Aug 16, 2015 at 13:57)
Hell no! Am I the only one that saw the damn veins sticking out of his arm? He's probably still icing his forearms after riding that thing all day. hahaha

captainsketchballs (Aug 18, 2015 at 15:52)
Maybe even a freeride bike. Hmmm
Below threshold threads are hidden