Sadly, the curtain is about to fall on the 2017 Enduro World Series race season this weekend, but there’s no doubt we’re in for another thrilling weekend of racing action, and a grande finale.

Set by the Mediterranean Sea in the Gulf of Genoa, Italy, Finale Ligure provides a spectacular setting for the infamous race from mountains to sea. Set over two days, the seven stages are set to be technical and fast, covering forest singletrack, open coastal trails, and some rocky sections in between. Transfer stages are 100% under pedal power, and with approx. 1,100-1,400m of climbing per day (covering in total around 50km per day), what else could racers and fans wish for to wrap up the season? A dip in the sea at the end of it perhaps?

The last race of the season will also coincide with the Finale Ligure Outdoor Week, an event dedicated to outdoor sports. With the limelight shining on this small rustic town, the EWS is surely the tickertape event to watch among the other cycling, swimming, trekking and climbing activities planned. Finale is the place to be this weekend, and if you’re not there in person, keep up to date with all the latest happening via Pinkbike. Until then, read on for everything you need to know ahead of the race. 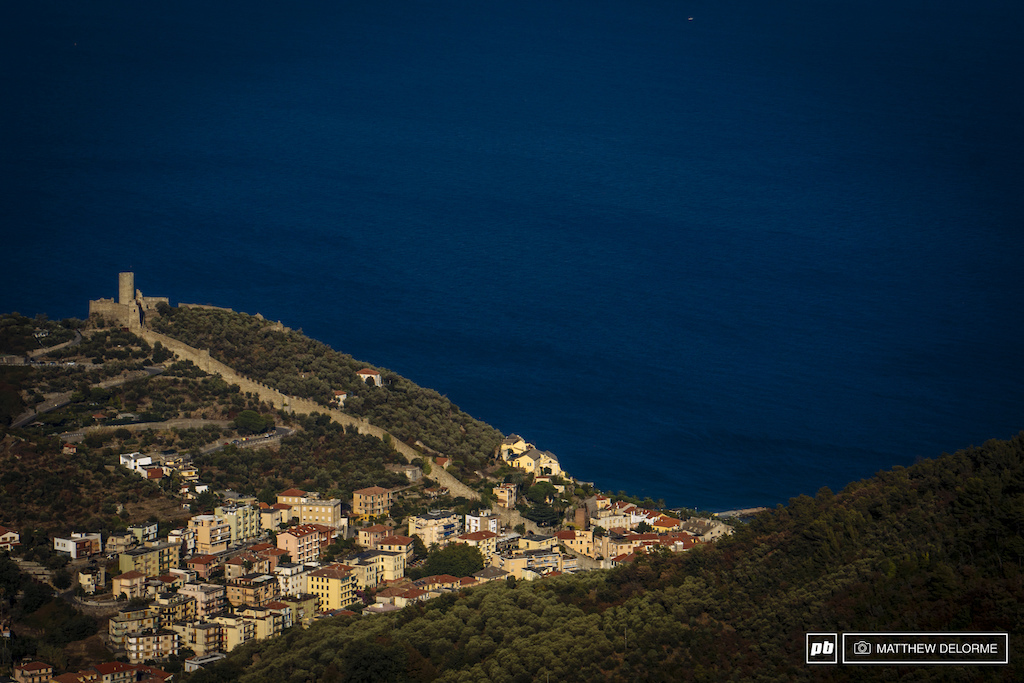 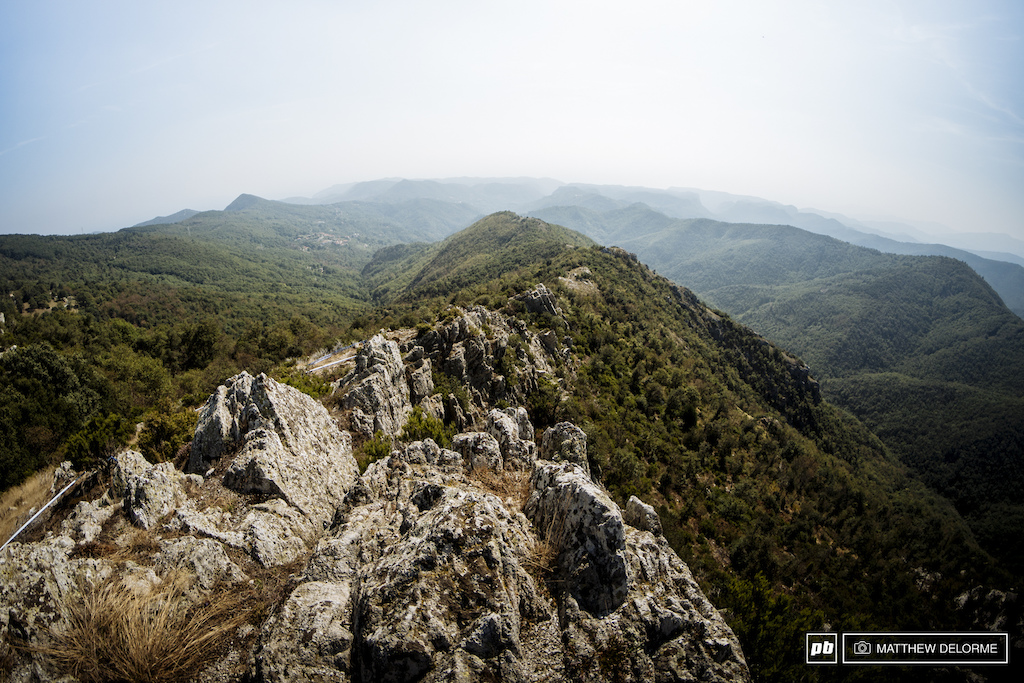 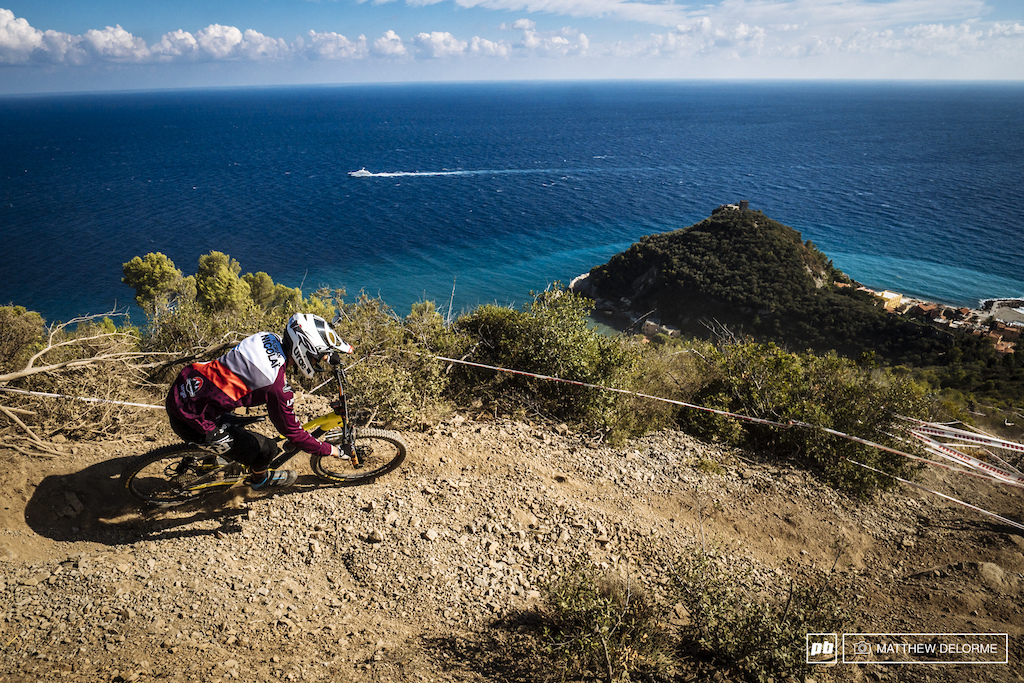 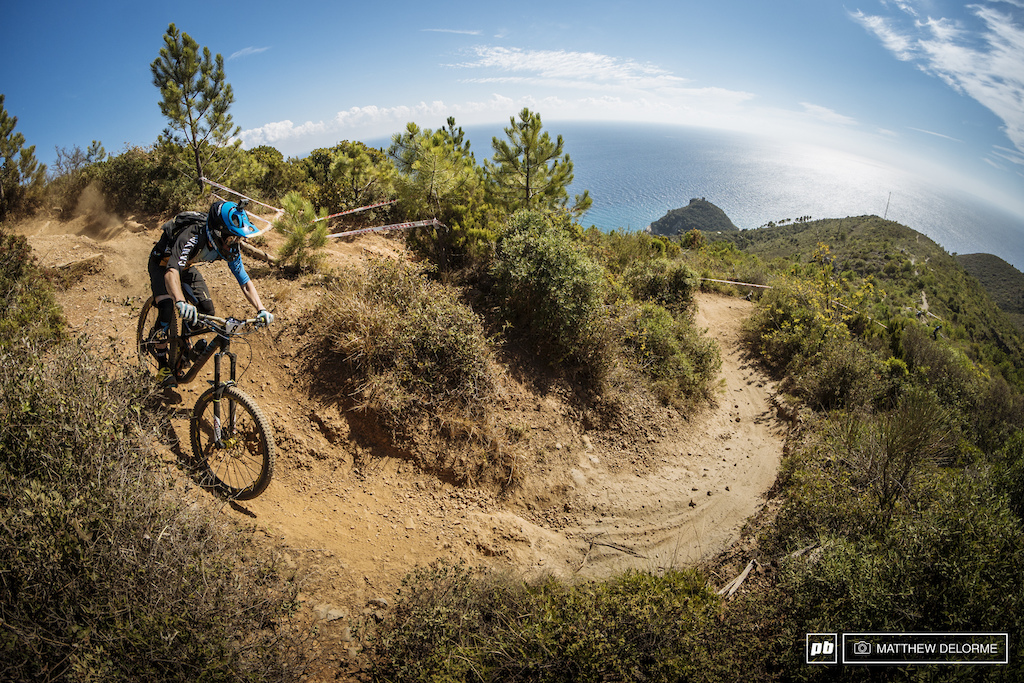 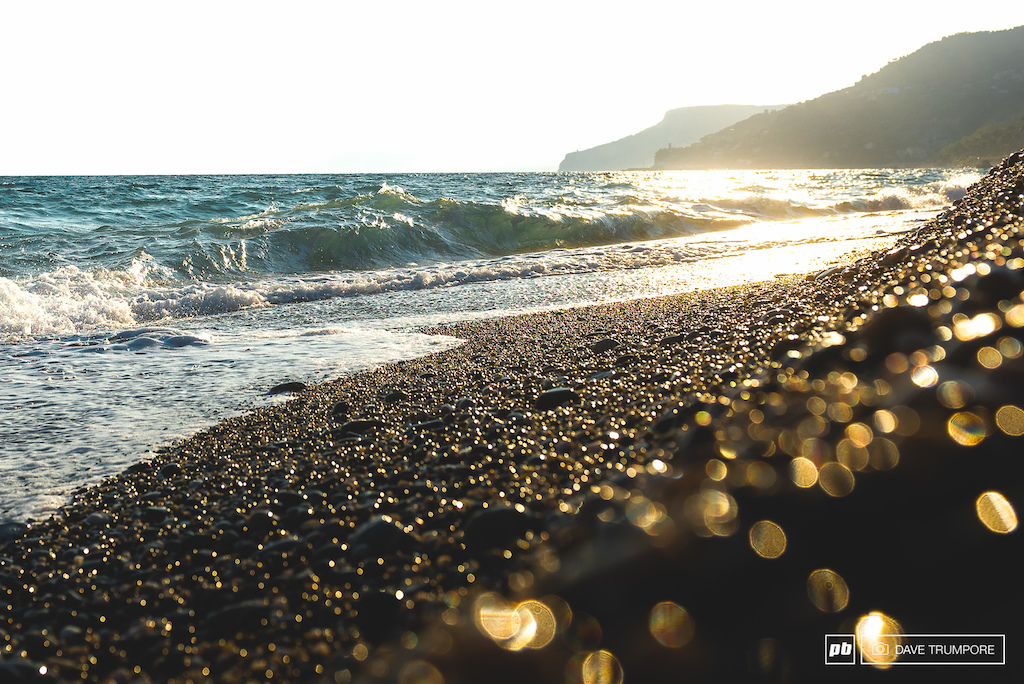 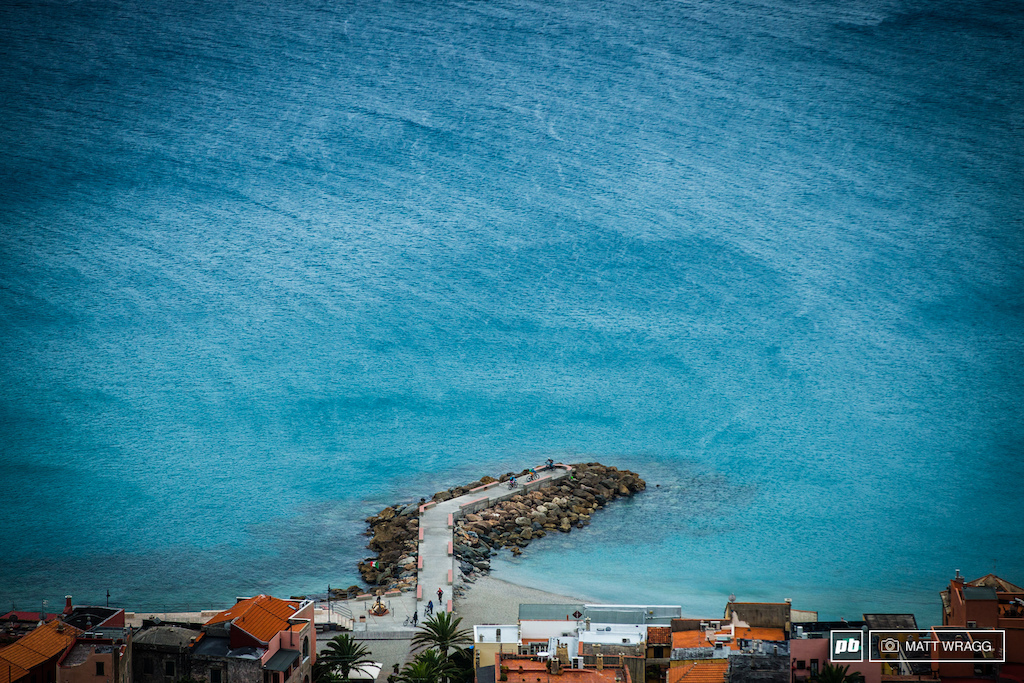 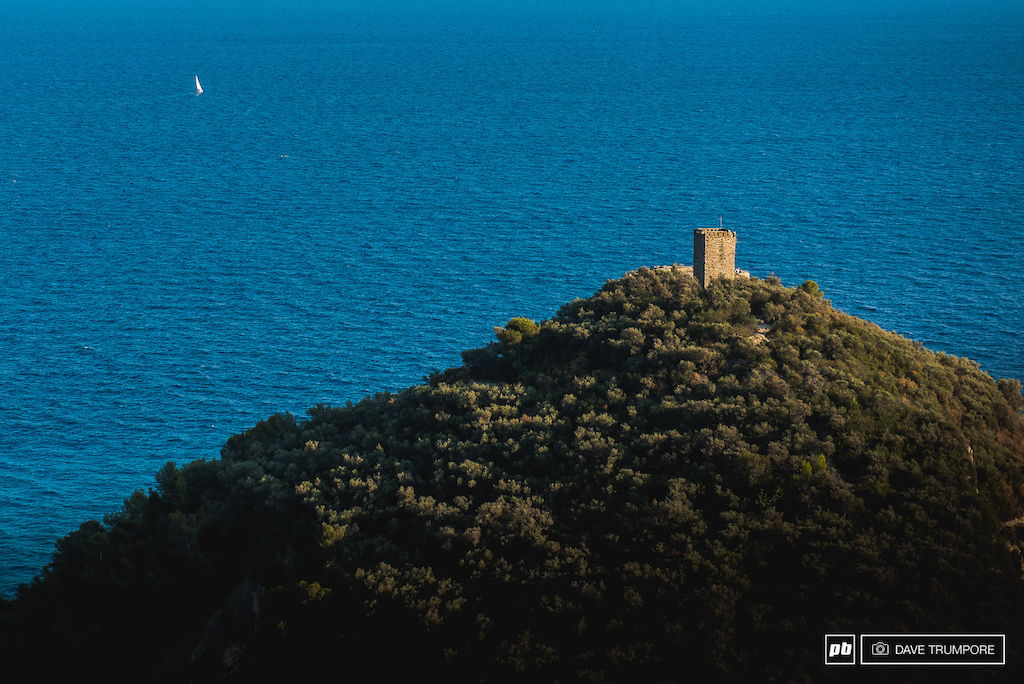 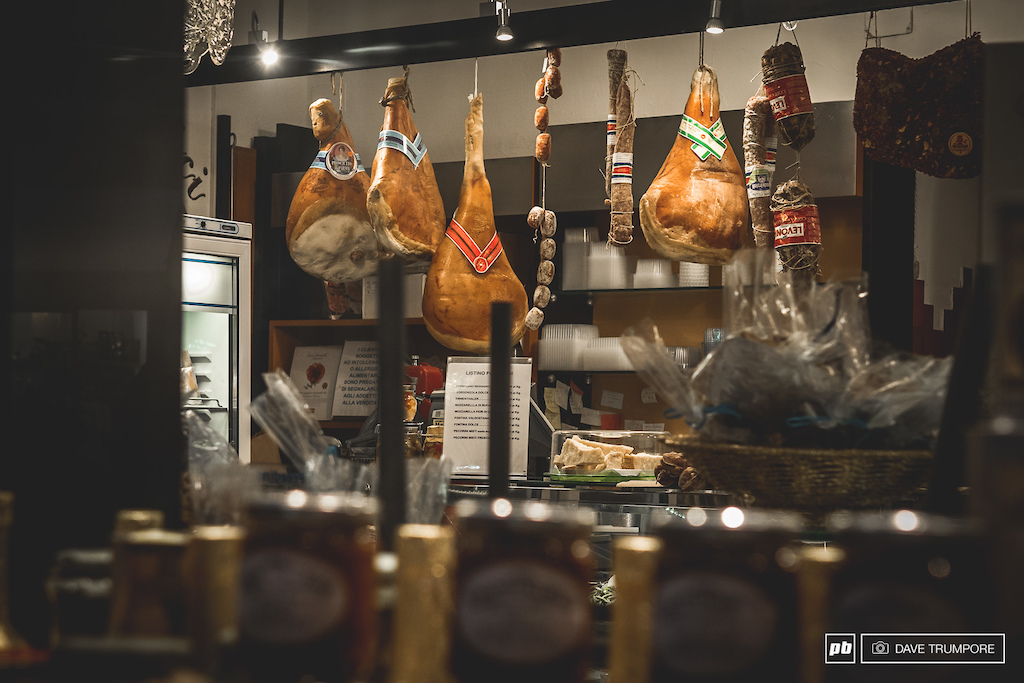 Finale is nestled at the base of a steep limestone mountain on the famous Italian Riviera in north western Italy. White sandy beaches, open air dining, and amazing views welcome tourists from around the world throughout the year, thanks to its Mediterranean climate. It's also a well-used filming destination, featured in many MTB films, and a firm favorite with bike and suspension firms, who regularly test in the area.

The town is divided into a number of districts, each with its own characteristic features, from the palm tree lined seaside promenade, to the narrow streets of the old walled Medieval town. Further up on the slopes overlooking the sea, you’ll find a plateau of cultivated and partly-cultivated land; a juxtaposition of where nature’s Alpine forests meets man’s mechanical hand, the latter of which traces a history back to Roman and Medieval times.

Beyond the growing MTB culture, the area is widely recognised as a popular rock climbing and hiking destination. If you’re not up for anything extreme, then chill out, enjoy the beach, enjoy the fine Italian cuisine, and enjoy exploring the narrow streets that were once run by Romans, then Genoese, then Spanish, then Sardinians, and then finally the Italians, when in 1861 it became part of the Kingdom of Italy.

Mount Carmo is the highest peak in the Ligurian Apennines, towering over Finale and visible from miles all around. Starting at 1,200m up, the Karma is one of the most complete trails on the global enduro circuit. With 8,6km of breakneck descent, punctuated by a handful of sharp, punchy climbs, it’s a physical test not to be underestimated – and will push the riders hard.

This trail is the purest embodiment of the Finale Ligure motto, “From the mountain to the sea”, with a total drop of 1,185 metres. The full run includes a succession of natural toboggans and razor-thin singletrack, before finishing a few metres from the glittering blue Gulf of Genoa.

A super-technical, extremely physical trail, distinguished by narrow and treacherous turns, with plenty of rocks to make things interesting. With 650m of drop packed into 2,8km, it’s a precipitous ride – one moment of switch-off could bring a rider’s run to a premature end.

This descent toward the sea is the ultimate initiation to riding Finale Ligure. It’s a mellow start, but the trail becomes very steep in the latter stages, entering a section full of turns with occasional glimpses of the sea through the trees.

One of the oldest, most revered trails on the mountain, the Dolmen was used in FinalEnduro way back in 2008. The trail takes its name from a stone megalith positioned along the route, but the competitors will have no time to take in the sights as they send it down the mountain.

The first part of the trail alternates smooth sections and technical rock gardens. 100% concentration required. The grand finale comes on an amazing rock section – perfect for an explosive finish.

This path runs very close to some crags popular with rock climbers. It starts off loose and dusty, before giving way to some seriously gnarly rock-strewn sections.

A true classic in the Finale area, rattling through nearly 400m of descent in just 3km. Fast lines and two of the most technical rocky sections on the whole mountain, with a finish virtually at sea level.

An iconic trail, both in Italian enduro and beyond, it embodies the spirit of ‘riding the Riviera’ like no other route. With packed crowds lining the routes, the riders should be super-psyched and bringing their A-game.


What happened at the last round?
Against the smoke-filled skies of Whistler, Canada, Round 7 of the Enduro World Series saw Sam Hill battling against local rider Jesse Melamed. The penultimate race of the series was an intense affair, with Sam Hill taking the first stage with a huge 17 second lead. However, local knowledge proved a winning advantage, with Melamed able to pull back the time and extend a small lead over Hill through stages 2, 3 and 4, teeing up a thrilling final stage. In the end, Melamed performed a minor miracle and somehow managed to cross the stage 5 line half a second up on Hill, cementing his top step finish. Mark Scott who had been strong all weekend, crossed the line in third place, and in doing so, took his first ever EWS podium finish.

For the Pro Women, we again saw Cécile Ravanel dominate across all stages, taking her sixth win of the season. Isabeau Courdurier crossed the line in second place, with Katy Winton in third, making it her second EWS podium of the year, and promoting her into third place in the overall results table. 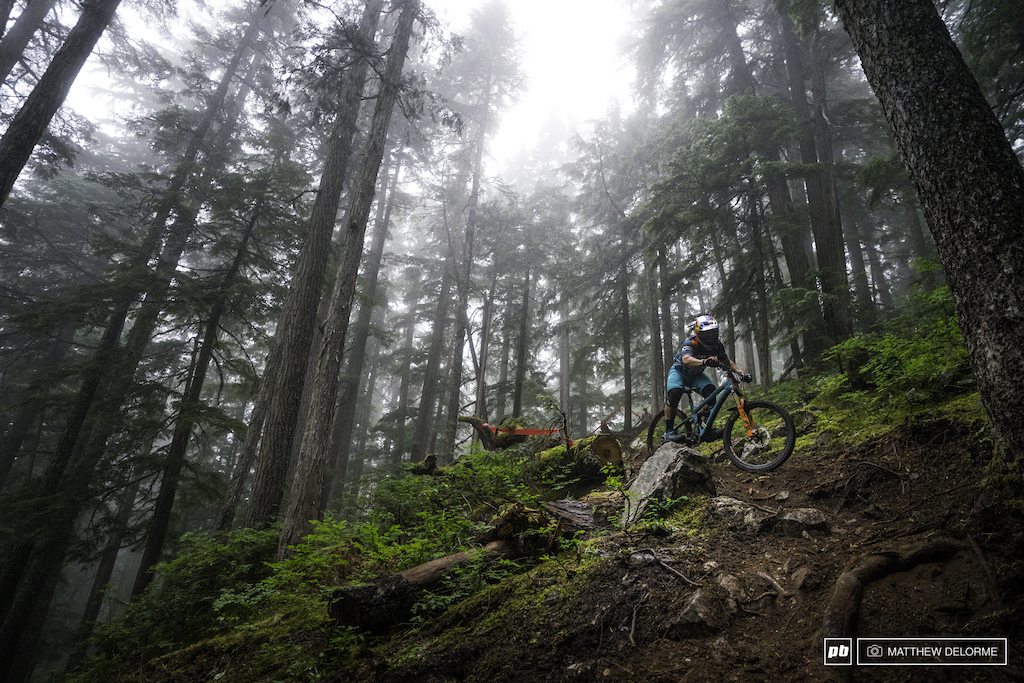 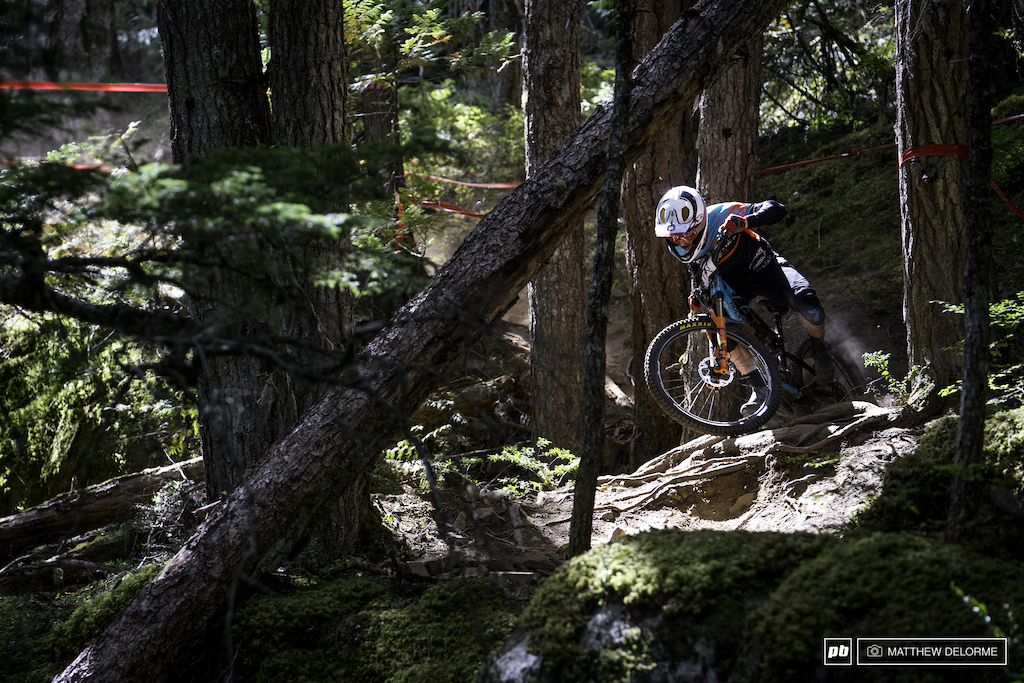 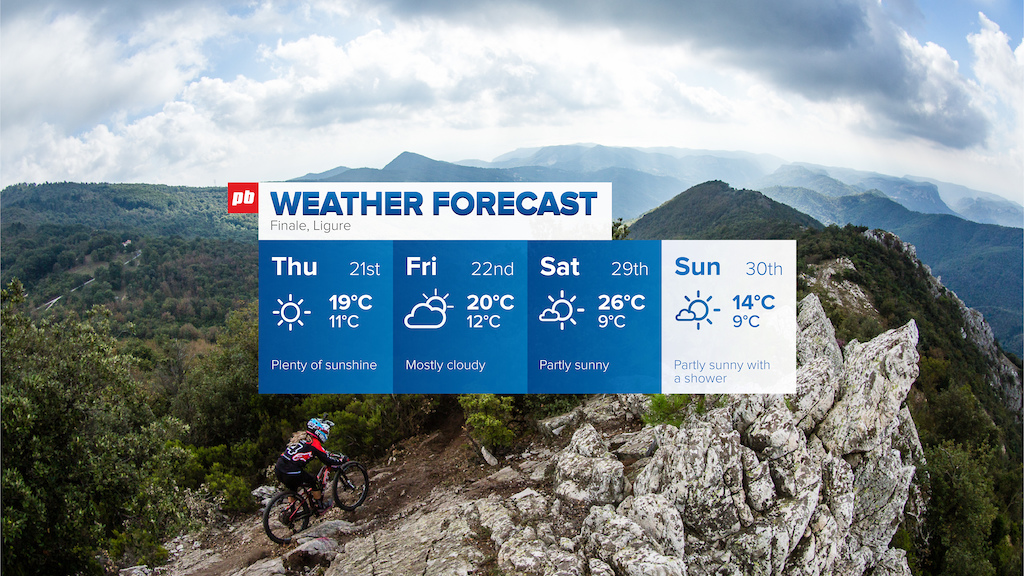 Weather forecast as of 24 September.

What happened last year at EWS Finale Ligure?
Finale Ligure has been the traditional end-of-year race for the EWS, and so it’s not just filled with memorable racing but also when riders announce news as they wrap their season up. Last year we saw Nico Vouilloz and Anne-Caroline Chausson announce their retirement from the sport, so it was quite an emotional send off for the two French legends of MTB. Racing wise, we saw Cécile Ravanel take her first ever Enduro World Series Champion title, and Richie Rude became the first male rider to be crowned EWS Champion back-to-back.

Come race day, we saw 400 riders competing over two days and seven stages. Riding under the late summer sun, the views of the cool Mediterranean sea was even more of an incentive to get to the bottom as fast as possible.

In the Pro Men’s we saw Martin Maes make his presence felt by winning all three stages on Saturday. Sunday saw him take a more calculated approach, keeping his energy in reserve, which ended up being a wise tactic. Maes took his first EWS win with 17 seconds to spare, beating Richie Rude into second place. Nico Lau took third spot after having a solid performance all weekend long.

In the Pro Women’s Cécile Ravanel took the win despite having a crash on Stage 1, Isabeau Courdurier was second, and Anita Gehrig was third, mirroring the final overall series result. 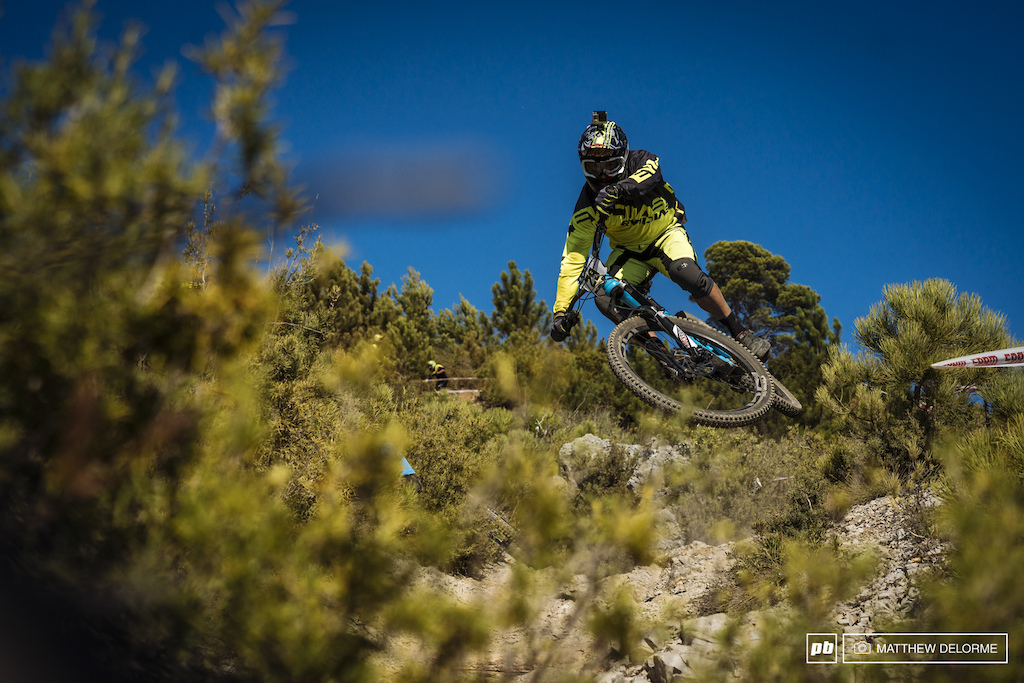 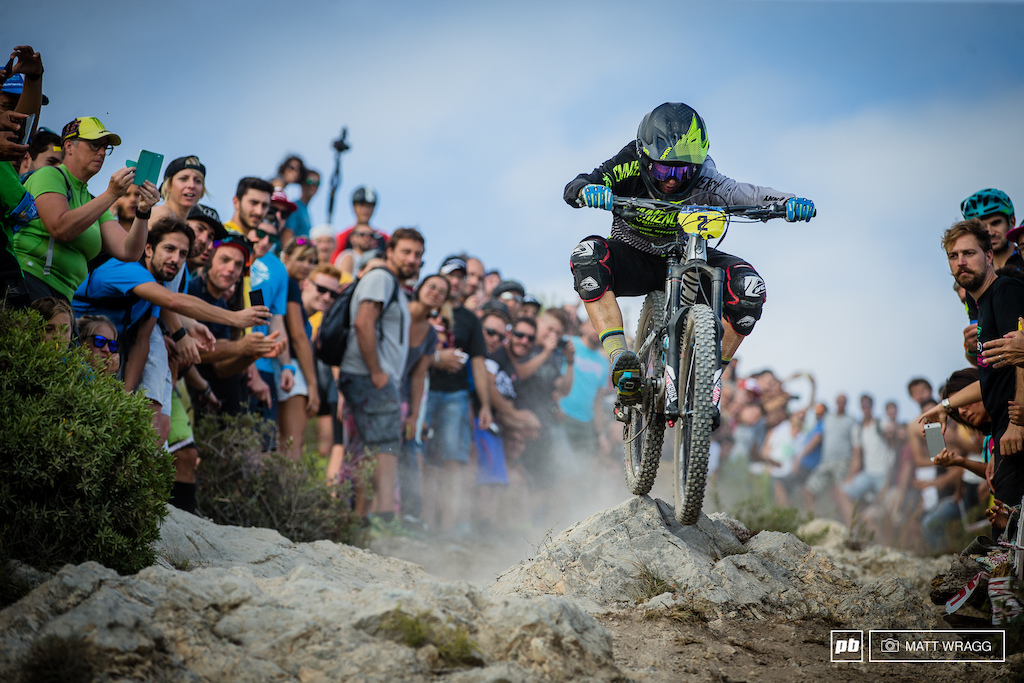 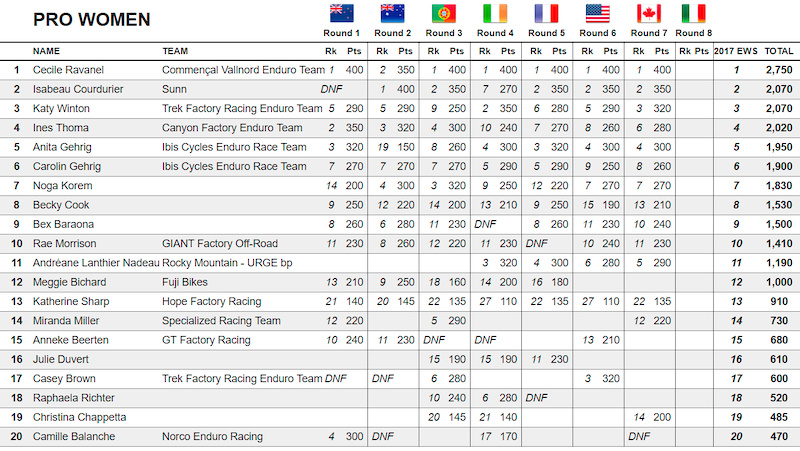 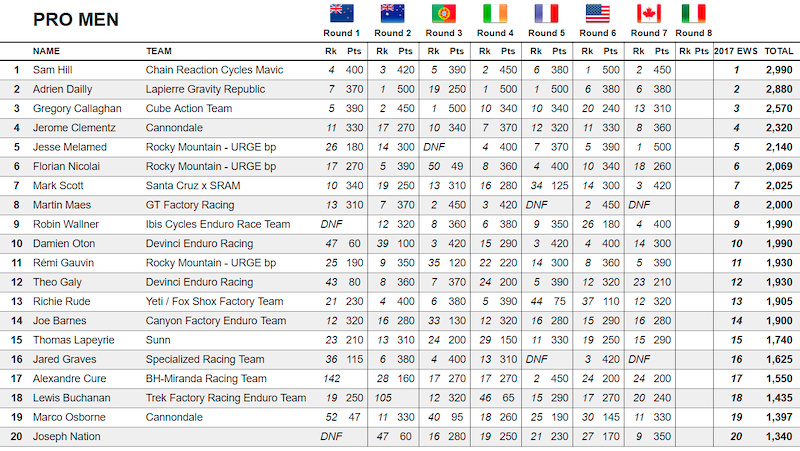 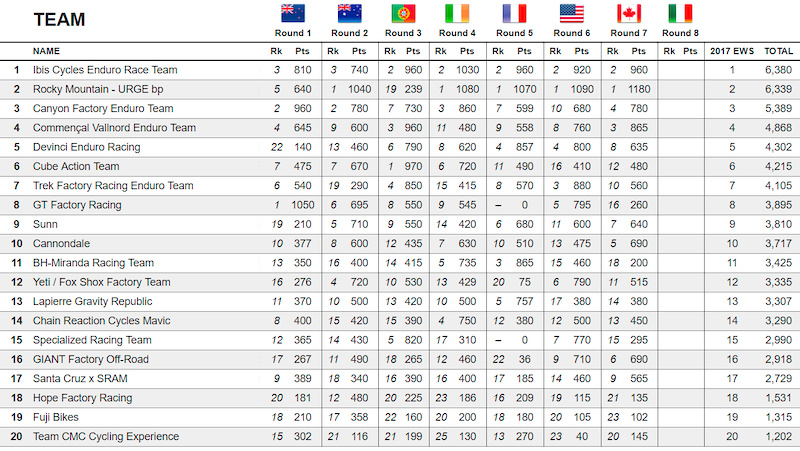 The schedule
Pinkbike will be providing you with the best daily coverage from our team of photographers and videographers, as well as the official EWS video crew in Millau this week. There’ll be content coming in from training on Thursday and Friday, and race day action recaps on Saturday 30th September (stages 1-3) and Sunday 1st October (stages 4-7), with the final rider crossing the line around 1730 CEST. You can catch the riders’ times as they progress through the stages on both days via the EWS live timing feature. 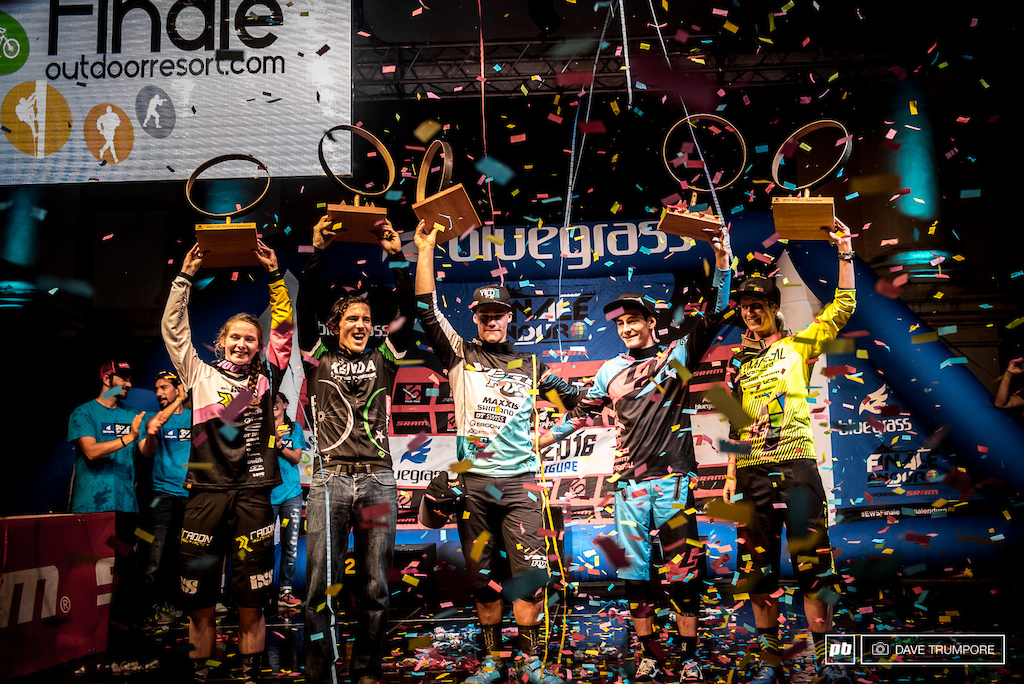 Diag (Sep 27, 2017 at 1:37)
So Sam needs to finish 4th or better if Dailly wins, 5th would put them tie in points but Adrien would take it with the best result of the two at the last race... anything is still possible :-)

HansvonStoffeln (Sep 27, 2017 at 2:20)
"white sandy beaches" I guess I have been to the wrong Finale a couple of times then. I didnt find that to be exactly. Its more like rocky beaches. But why am I bothering, just been a few times at the beach there! Finale is all about shredding those trails!

santoman (Sep 27, 2017 at 6:54)
Absolutely! I try to make it twice a year to Finale and have been once in the past six years to the (rocky) beach, but, as you say, why would one want to go anywhere else but those trails?

nerds-on-dirt-mtb (Sep 27, 2017 at 7:08)
I haven't been MTB riding very long but this has been an amazing year to watch, I wish they would give EWS the RedBull UCI level coverage! Can't wait to watch the highlights though thanks PB!

adrennan (Sep 27, 2017 at 7:15)
the courses are way harder to cover since it isnt just one run to focus on. I will say the EWS lead up and follow up coverage is as good or better than DH

PinkyScar (Sep 27, 2017 at 6:05)
Had anyone been tested and found positive for doping in the EWS series? What testing protocols are used?

Lankycrank (Sep 27, 2017 at 7:44)
Not sure what protocols are followed today. Here's an interview with Cedric Gracia, casual chat about doping and drug use in Mountainbiking. dirtmountainbike.com/news/doping-enduro-cedric-gracia-discusses-drugs-mountain-biking.html
I definitely subscribe to the idea of clamping down on this strong from the start, don't want the reputation of EWS athletes to suffer because of some black sheep....

PierreVonOz (Sep 27, 2017 at 1:18)
You think Sam will retire if he takes it out? Would be a great way to finish up - a final bitch slap to all the younger crew before being put out to pasture to drink beer and ride rowdiness at his leisure.