Tales of the YT Mob: Round One, Lourdes - Video Recap

Reigning World Cup Champion Aaron Gwin scored a historic win for his new team’s title sponsor, YT Industries, by taking their TUES CF Downhill bike to a maiden victory on the slopes of the Pyrenees on the outskirts of Lourdes, France. The opening round of the UCI Mountain Bike World Cup, the 24th season of the series, presented plenty of challenges throughout the week due to changing weather conditions. 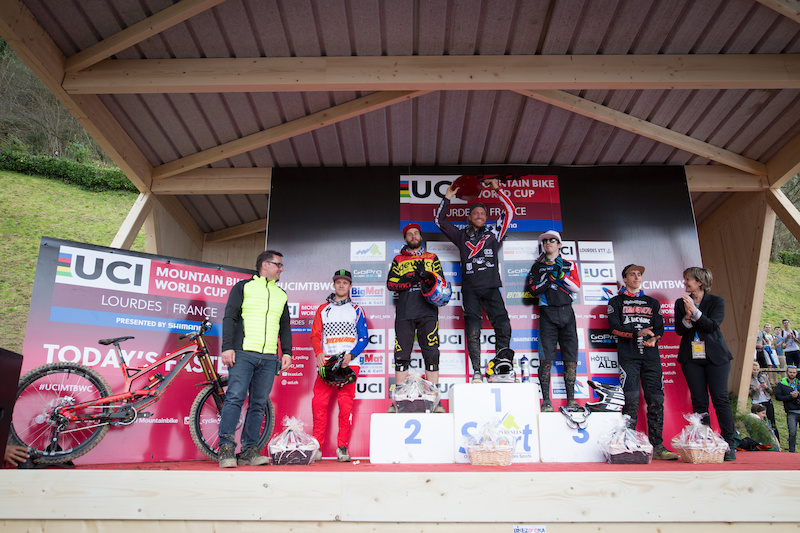 Despite the sunny weather on race day, threats of a looming storm late in the afternoon certainly gave everyone something to think about as Aaron went up the hill to start his race. His win last year on this course was in extremely dry and dusty conditions, far from today’s track conditions, so to walk away with a podium result would have been a great start for the new team. After the first split it was clear that Aaron was on a great run, building on his lead throughout each of the 4 section before finally crossing the line with a 3m 09.131secs, some 2.7secs faster than previous fastest Danny Hart (GBR). 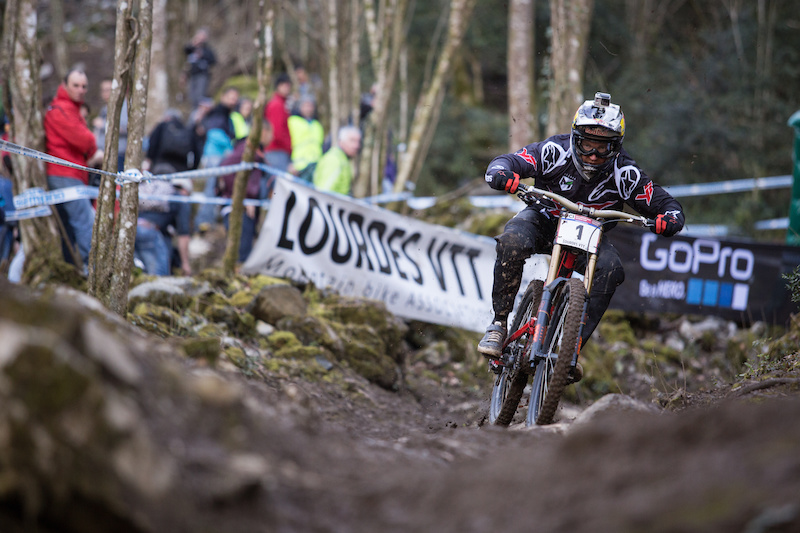 Nine riders were left to come down but all eyes were waiting on crowd favorite and World Champion, Loic Bruni of France. Bruni was showing incredible pace and was up on the first 3 splits but a small mistake was a sign of things to come as he pushed a little too hard towards the bottom and came off his bike. The win was Aaron’s. In fact, this was Aaron’s 50th World Cup start, his 30th podium, of which 15 have been wins.


Aaron’s teammate Angel Suarez had a tough week and after a heavy crash on a Saturday practice run and was suffering from a sore back. Unable to complete his second practice run he went straight into qualifying but was unable to ride at his limit and just missed out on the top 80.

The team now prepares for Round 2 in Cairns, Australia, on April 22 and 23.

MtlWoodworker (Apr 11, 2016 at 13:42)
Gwin seems so much more relaxed now that he doesn't have that huge corporate sponsor up his ass, this is how a dh team should be like, at the end of the day its still just bike riding, make it fun, and you shall win!!!

bikekrieg (Apr 11, 2016 at 15:33)
@George1220: Hopefully they don't make Canyon's mistake and grow too big, too soon. They need to be able to still provide some amount of support for their customers or risk a huge fiasco.

MasterOfStone (Apr 12, 2016 at 4:47)
Yeap the moment Aaron Gwin announced his official main sponsor sales of TUES or Capras went t through the roof top...Anyway, I am very happy to see him take the first win.

nathancedwards (Apr 11, 2016 at 20:59)
Often these mechanics spin the hubs on an electric screw driver for a couple minutes to wear down the bearings to a point just before they would need to be replaced. This decreases the friction significantly but also means that they replaces the bearings after each day, if not after each run. There is a great video of greg minnaar's mechanic doing this and I have personally seen other WCDH mechanics doing this as well. Does anyone know if EWS mechanics do something similar albeit to a lesser extent?

egshane (Apr 11, 2016 at 23:45)
@nathancedwards: Have you looked at the NOBl (ONYX) hubs, I just got a set on my bike and out of the box these roll so well its a bit weird. You can spin the free hub by hand so easily its trippy. I guess you could remove the inner seals for the hubs and use a light oil if you wanted on standard hubs

Great bikes...now great edits...just bring that apparel to the US!

Narro2 (Apr 11, 2016 at 14:10)
what a great way to start increasing sales on your DH bikes... that growth will definitely be exponential, YT's management team must be huge risk takers, I haven't been able to find YT's annual revenue on the interweb so I am still surprised they were able to afford Gwin, somebody had to take a quite big shark loan or Gwin took the bullet for YT in exchange for something, like part ownership for example. Any way I am stocked for Gwin and YT.

Pininator (Apr 11, 2016 at 21:06)
I think that's where KTM and some of the co-sponsors came to the plate. It seems like they're all-for-one, unlike a big-brand company that tows the line for the smaller sponsors. I could easily be wrong, though. Just going off what I've seen so far.

fabdemaere (Apr 11, 2016 at 23:23)
Looks like torso only, but either way, the French rules require elbow protection