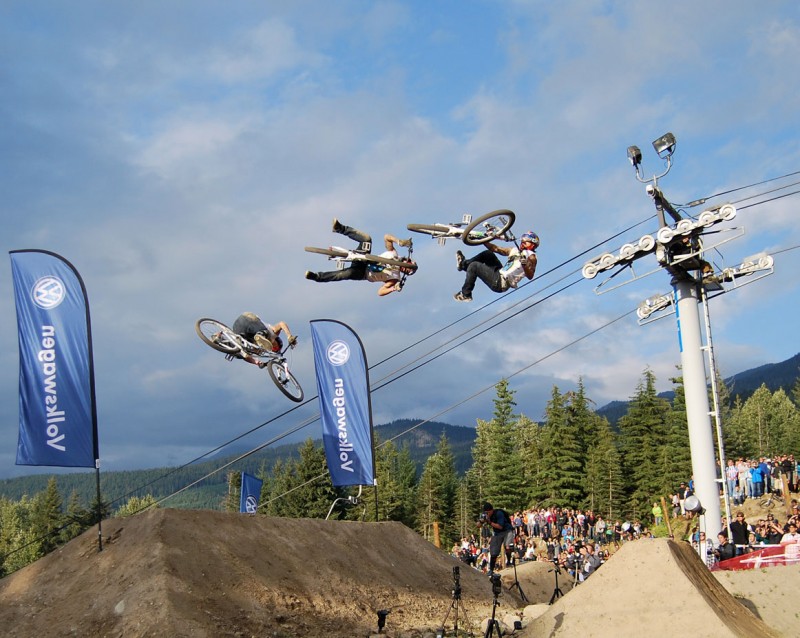 olaffons (Aug 16, 2009 at 4:14)
he's so fucking amazing rider... he's the best... screw Watts,screw Semenuk,who just did what they got to do without throwing anything new. he's the real pro,allways goin' huge and full of passion for bike riding. that's how The Kokanee Crankworx should look like,not only 3's and flips and solid riding. it's crazy contest,so suppose to be full of new,allmost impossible tricks. I'm terribly dissapointed by this year track and riding,noone from the top suprised me. Only The Crazy Spaniard show the balls.

konad (Aug 16, 2009 at 9:21)
wow wow chill,thats what crnakworx is all about,andrew threw down a big trick,he had a shity run tho,evryone busted big,it was alot of tricks that didnt ever go down before at crankworx,all in all i realy liked it.

konad (Aug 16, 2009 at 10:14)
were all smilin after that show,the double whip was a first for whistler crnakworx no one landed it before,the 3whip drop was a first aswell as the truckdrivers off drops was a first for whistler,so i guess nothing new was realy invented but alot of riders did things never done before at whistler and alot of riders steped up there own game so as far as progression i just thuaght it was realy realy good considering last year the bar was set so high its amazing that riders were still able to bust new tricks. your rite tho the big new trick was andrews 3 superman,he does some inavative tricks on the big jumps

spqrtomas (Aug 16, 2009 at 11:41)
olaffons, Watts is a innovative rider, just look at new NWD teaser - flip double whip or flip double barspin... and at Crankworx he did 360 whip & 360 barspin off the drop, for me it's much better than Andreu's tricks showed on this contest

olaffons (Aug 16, 2009 at 11:50)
yeah,I've seen it.
I never liked Watts,but after watching live realtion from Colorado I must say,I'm full of respect for him.
I know,he's very innovative rider-he was the first to stick double backflip,flipwhip.
In my opinion fact we didn't see anything from this sick stuff is annoying.

This year Crankworx was boring,every rider was doing exactly the same tricks on same jump.
And again and again...
I'm glad there's little crazy motherf*cker who tried something unbelivable.
Tomas,I'm not saying that Andreu should win the whole contest.
Watts made a great job,had impressive run,but what the f*ck happend to others??
somebody cut their balls or something??
and btw,3-whip and 3-barspin off the drop are nothing new...

spqrtomas (Aug 16, 2009 at 20:15)
if you were here, at Whistler, you'll change your opinion about the jumps... you can only dream about jumps like this course

CanadaDiscGolf (Nov 30, 2009 at 14:12)
I think the complaint of "all the same tricks on the same jumps" partially stems from the course layout. There was not very many options for line choices, all the riders pretty well had to ride the same line.

olaffons (Aug 17, 2009 at 6:33)
dude,I know,he's dirtjumper not a slopestyle rider.
but Man,every rider was doin'exactly same tricks...
it's f*cking annoying if U see 10 same lookin runs.

Lacon and Watts were the only guys to show,how much they want to evolve this sport.
Rest of the guys was acting like they are in Whistler only because of the money and pressure of sponsors.

and Man,what's the difference between ss and dj??
in any type of contest U try to be original,show something new and crazy,not just stick same shit over and over again...
that's my opinion.

konad (Aug 17, 2009 at 9:40)
shut up,frontflips from guys who had never done them before,super seats off the giro,superwhips from claw,mike m was doing 720's and barhops. martin did doublewhips all day,NEVER landed before in whistler. seriosuly dude how many time we gota tell ya,the show was f*cking nuts,if you cant apretaite get off pinkbike.or keep your silly coments to yourself. no one thinks the riding was shity. thats the one thing evryone can seem to agree on that was 100% SICK,i wonder why

what the f*ck are U talking about??
maybe U should get oput of pinkbike because U can;t see that there was nothing new except of the sick lacon flatspin superman seatgrab indian air...
it's funny how U think the guys with different opinion should shut da f*ck up and listen to guys like U.I think that this year Crankworx could me much better and that's all.
don't take it perrsonally...
I'd love to see some crazy stuff,but everything,that had beeb sticked on Crankworx U can see in NWD from few past years.
I think riders should be more innovative and show something more than just solid riding.

cheers Dude.
and don't U ever say that I gotta get out from pinkbike...
we all got to respct eachother and respect others point of view.
kisses.:P

konad (Aug 17, 2009 at 18:03)
no respect to someone who doesnt 100% respect what went down,dave smutok said its the real deal its the f*cking real deal. there was TONS of new moves never done in WHISTLER before i said,and zinc throwing fronflips,thats new for him.

olaffons (Aug 18, 2009 at 11:21)
I'm not talking about what was new IN WHISTLER but generally what was new...
yeah...
Dude we've got completly different point of view and for me that's cool.
I see U had some different expectations from me.
that's fine.
I said,that for me personally this Crankworx was boring and no matter waht U gonna say,I'm not gonna change my opinion.
so stop shouting!!
I didn;t said I've got no respect for this guys,because without them this f*cked world wouldn't be the same.I respect every f*ckin' one from the riders,but I was totally disappointed that they didn't come for allmost anything new (in the world not in Whistler).

konad (Aug 18, 2009 at 11:36)
alrite bro,i guess you got super high expectations,just a word of advice is dont get your hops quite so high,the course was prety big,and progression doesnt jump 10 years ahaead evrey year at one slopestyle.... for what went down this year and last year,what happened at crnakworx was more then most people could of imagined,but you know maybe your in luck next year because greg will have to throw down his best moves(his huge flip and 360 combos) and for slopestyle it should all be new stuff,so maybe you will be in better luck next year. i undertsand better now what you mean,that even though its all crazy,its still alot of moves we saw at prety much every other course this year,and last year with the exception of a couple guys who did new stuff.

AustinSedz (Aug 17, 2009 at 1:06)
and the funny part to that is his bikes are custom... so the actual product that's available to the public is not nearly as good as what he's riding

konad (Aug 17, 2009 at 9:37)
ahh not a thign about his bike custom guys. not a single kona team bike is any different then what we can build up. if you think andrew is the only rider keeping kona alive,you must be the same moron that thinks,kona's team bikes are not available to the public,sheeple

konad (Aug 17, 2009 at 18:16)
are you a retard,it has a team custom paint job,that it,the kona frame is stock,different paint job is it,same geo as my cowan and evyone elses. infact you could buff your cowan ds and it would be exactly the same,the only thing from kona is the frame and again its the same design/geo.material as all the production frames,even his componets are available on the market,hey bud dont take my word,i dare you to go to konaworld and personaly ask dik if the pros get better frames. even kyle strait and claw ride wide available market bikes,always have,oviously its much better for buisness,but even cam mcCauls bike will one day be availbale on the market probably,so go rag on trek,or sam hill not kona,oviosuly team riders will get a custom paint job.

konad (Aug 17, 2009 at 23:29)
for alor of models i agree,except the cowan ds. it's clearly proven to be one of the best bikes for what it is,the fact you dont need a tensioner to run ss and the fact that kona was prety much the first guys running it for slopestyles they are realy sick,and evryhting else is roughly the same price or more. alot of solid riders have them.

AustinSedz (Aug 18, 2009 at 10:11)
except the cowan ds was discontinued for 09 for whatever apparent reason and they now have the bass which doesn't share the same bb pivot system. Now commencial is making the absolute ss and it looks like the cowan ds will have met it's match.

konad (Aug 18, 2009 at 11:15)
well theres tons of bikes that already have,but the comencial is probaly going to be wayy more money,just like all the other frames like it. the bass isint ANY different,as the cowan was for frame only,and the bass was designed as the complete bike.and youl see the new bass is singlespeed,so its the EXACT SAME bb pivot. they probably dont want to sell just the cowan frame anymore,especialy cuz cowan doesnt realy compete. try and get your facts together before you make pointless coments,i know you dont like kona and dont spend anytime understanding kona's technology,so then my point is stop saying stupid shit.

spqrtomas (Feb 1, 2010 at 2:09)
unfortunatly not, it's too expensive for me to fly over whole world again, but i plan go there next year