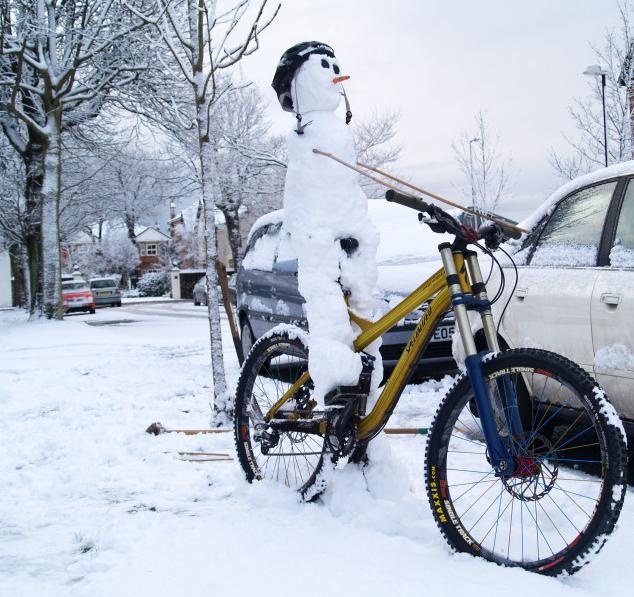 Join Pinkbike  Login
Tweet
were riding on a spesh were riding through the snopw tonight...

Trail
Snowman
Riders
on a bike

pugnacious (Jan 7, 2010 at 10:58)
It's my picture, I put it on moredirt, facebook and I did send it to the BBC; though I have no way of knowing if it was this 1 he mentioned, as I sent it to north-west tonight and I didn't hear the show.
I don’t mind you posting it though, seasons greetings everyone.
The gloves are a good idea, I was planning on putting snow down the arms but it wouldn't stick to the bamboo, they did look a bit bare.
Only took ~90min, I used bamboo for both legs; only annoying thing was the right pedal, which kept turning.
Here’s the facebook album if anyone’s interested.

RaleighVoid (Nov 15, 2011 at 14:27)
correct me if i'm wrong, but for that to be funny you'd need another link to something in the picture other than the fact that he's a snowman. something to do with the fact that it's a snowman on a bike, for instance, 'its a snowman-tain biker' not saying thats funny in any way though... this concludes today's lesson on humour.

citizenlee (Jan 11, 2010 at 8:52)
Haha, that's pretty funny! Good to see some people actually enjoying the snow rather than barricading themselves indoors and moaning about it!

allmountainman (Jan 6, 2010 at 10:03)
best pic ever, you must have so much patience to have got that to stand up and everything, amasing