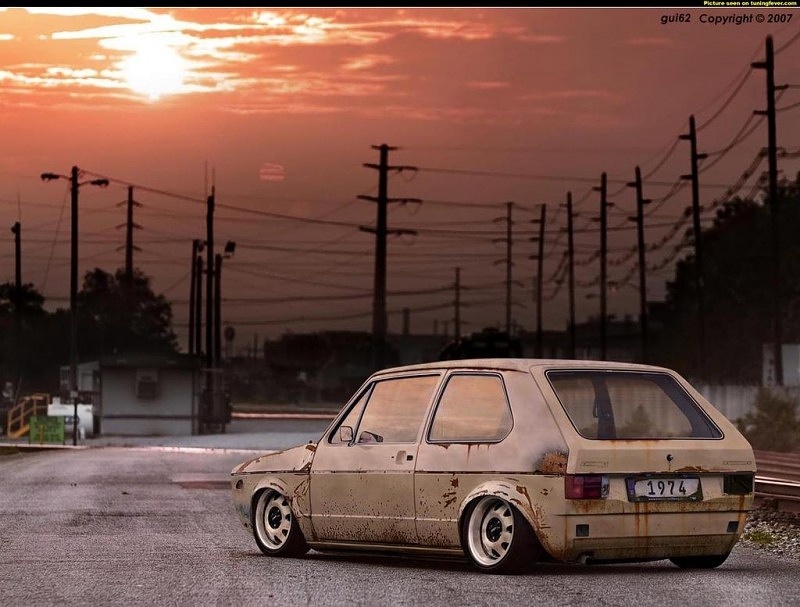 mk-dvo (May 23, 2010 at 11:21)
Your comments are absolutely useless* and inane. There is no evidence that the Exhaust is photoshopped. It is stock rabbit exhaust which if I believe is 1 1/2 inch. I suggest you take your heavy-set ass back to learning bar turns before you try to prove un-provable points, You Hefty Idiot.

that pic is a photoshop of this

mk-dvo (Apr 28, 2010 at 0:27)
Dub stance, real eurotrash right there. Just so you all know, I guarantee this thing is running a stock motor. The camber in the back is due to the suspension design the older Volkswagens have. It is not some "performance" modification to get mad handling. If you knew how suspension was tuned for performance, you would know that something with that much camber would do nothing but shit.
Amazing Mk1, when I seen this picture it reminded me why I am a Dubber. f*cking love it!

haroman666 (Oct 15, 2010 at 10:26)
@mk-dvo: If your a Dubber, you should know that show cars like this tend to have bollocks all done to the motor anyway, and that using camber like that for performance was the last thing on the owners mind, and that slamming a Mk1 doesnt make -20degrees of camber just like that. There is more than likely many washers or "wedge shaped" spacers between the stub-axle and rear beam. Mk1 having a trailing beam style rear suspension means the camber doesn't change as travel is used. The camber is static.
Eurotrash... The euro scene for mk1's is probably the biggest to be honest, and its popular because its good.

yamahammer (Oct 19, 2010 at 12:41)
MK DVO after reading your comment, i almost fell off my chair laughing, you really don;t know anything about vw's even mk4s have solid trailing arms, they have always been the same, and there are no adjustments front or rear on any vw's

supercooper (Oct 22, 2010 at 2:09)
well then what are you on about saying that you cant adjust them, theve obviously been changed

haroman666 (Oct 22, 2010 at 4:24)
Thats what we're saying... mk-dvo said they camber like that naturally when you lower a Mk1. We're saying that doesn't happen, you need to "adjust" them to get that sort of camber. BUT the solid trailing arm style suspension this car has means no adjustment is available as standard. Alot of higher spec cars nowadays will have the ability to adjust the suspension without having to buy aftermarket... This car is too old for that to be a feature and you have to buy aftermarket or bodge the job.

mtb-rider (Mar 10, 2010 at 12:21)
First of all a golf mk2 like that...has a pretty nice engine. How do you know if he does not have anything under the hood? Know I'm not saying that this particuler one is flying fast...! And look at the camber of the back wheel. That camber is used for racing cars. If that car was in good shape it could eat up a lot of cars that rolls on the streets! And yes this would be a sleeper.

curtalcorn (Mar 10, 2010 at 12:46)
You do know that its lowered? You get camber when you lower a VW, and Im pretty sure if it was modded heavily it would have a larger exhaust...

Mazekwon (Mar 11, 2010 at 6:18)
not necessarily is typical modification, more air in + more air out = more power, is true but that isn't a very good indicator of the performance level of this car. i think we can all agree it doesn't look very stock (except for the exhaust...) i have seen cars that looks as bad as this run 10sec. (and hey who knows he could have it straight piped with a decoy exhaust at the back)

riggadon (Mar 24, 2010 at 14:24)
i believe the correct molification of the axial loading powerhouse 3.5 gtz is unequivalent to the aft foundation fuel loader. therefore the chassis is metaphorically unstable causing english teachers to throw calculators at their pupils

dnbmx (Mar 28, 2010 at 16:27)
big exhausts are just for looks, unless the rest of the system is wider than standard aswell performance wont be increased. if you took the cat out of any exhaust system then the performance would go up straight away without affecting the looks of the car. just because a car has a nice exhaust doesnt mean its fast, and vice versa

curtalcorn (Mar 28, 2010 at 18:26)
... If you are building something for power, the first thing you do is what? Intake and exhaust. No one will keep a dinky little exhaust if theyre trying to gain power. Exhaust is one of the best mods you can do, bigger is better, to a point, and little dinky exhaust is gonna rob a lot of power.

dnbmx (Mar 29, 2010 at 8:55)
if you have a bigger exhaust tip without increasing the size of the rest of the system or getting a sports cat there is no power increase

Mazekwon (Mar 29, 2010 at 10:35)
It's Sherlock, and it is relavant to your comment because you just said exhaust, no particular part, just EXHAUST, you mean the burnt fuel emissions that come out of the exhaust pipe? he was saying if you just take that 1 1/4" pipe and attach it to a 2 1/2" muffler your not going to get anything more than if you just had the 1 1/4" pipe, by what you said "Im pretty sure if it was modded heavily it would have a larger exhaust..." by that premise your saying that if he had a larger tip on there you would believe it was moded, instead of maybe saving that 300 bucks on a dumb fart canon, he bought a new igntion coil, iridium spark plugs and wires and actually gained some horse power, instead of just following some stupid trend.

haroman666 (Oct 15, 2010 at 10:32)
If any of you guys knew, or had anything to do with the Dub scene then you'd know that SHOW cars such as this have near on f*ck all done to the engine. Why? Well... Because they are for SHOWS! The cars are driven from owners garage/drive to said show, and then back a couple of days later. End of. No ripping apart people at traffic lights, no performance camber, no 200bhp+. Its not for performance. Camber like that would do f*ck all anyway.

kinny-pb Plus (Sep 13, 2010 at 13:36)
Minus prop me all ya like but frankly this car is crap, I don't like the Rat Look it would look better spray painted, and with the wheels they're cool, just needs bumpers and be refurbished it's a Mk1 Golf afterall.