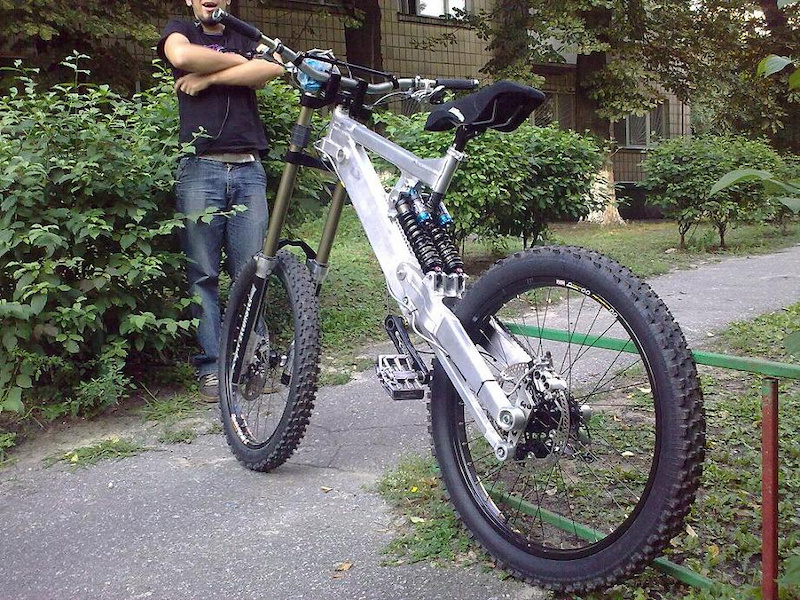 musclemilk (Aug 25, 2011 at 9:19)
FUCK ME SIDEWAYS 0.o thats ridonculous ! imagine if the skilift was broken fuckkkkk pushing that up the hill lol

musclemilk (Jun 7, 2012 at 3:20)
actually hes proberbly seen loads seing as there just standard 28" 700c wheels :L they just name it a 29er because they put tires with ridiculously high sidewalls on them lol

Kona-Rider1 (Jun 6, 2011 at 14:48)
having 2 shocks lets you fine tune the suspension more. they used similar set ups on some MX bikes a while back too

Downhill-Christy (Jun 6, 2011 at 17:04)
Or you buy the double barrel? Two shocks makes it much more difficult to fine tune. In MX for practice, the top boys can run a bike round a track, plug it into a computer and be told what setup exactly is needed. In free-riding, this is not a common luxury. Also, who needs a finely tuned shock for hucking; just turn the rebound down...

elchris123 (Jun 20, 2011 at 16:53)
its because of the crazy leverage ratio, and putting the right weight spring on just one shock on this bike would put a TON of stress on the little plates. therefore, two shocks with lighter springs and therefore twice the strength. good idea . . . if you are dead set on this type of suspension . . . and 14" of travel!

bike-person (Jun 20, 2011 at 18:09)
just sayon but this frame is completely entirely different from your ellsworth...

elchris123 (Jun 22, 2011 at 1:28)
true, but still, a 4:1 leverage ratio is crazy, especially for a bike thats gonna be blowing through its travel extremely harshly (this is what hucking does to suspension, as we all know) so . . . why not make it safer. besides, a 4:1 leverage ratio is outside of fox's acceptable warranty range. so they must also figure it cant be good for a shock . . . just saying

Downhill-Christy (Jun 22, 2011 at 2:57)
@Elchris123, you make a good point. I hadn't realized that that was the case with Fox shox, and obviously there is a reason for that. I actually appreciate it when someone has a reasonable argument on Pinkbike like this

.
However, 'Bike-person' you obviously have no idea about suspension builds such as the 'ICT' patented rear end that all Ellsworths have, making it the benchmark for all other bikes and making it one of the most pedal efficient bikes in the world.... The only thing they have in common is they're bikes with suspension at the front and rear and run an RC 4.. Other than that it's a different ball game.

Downhill-Christy (Jun 22, 2011 at 10:33)
You didn't really make that apparent by saying "actually yeah there pretty similar."

Downhill-Christy (Jun 22, 2011 at 15:16)
Apologies buddy, I miss-read your first comment, twice. Sorry! I thought you said the frames were alike, sorry for that mate!

Downhill-Christy (Sep 27, 2011 at 14:26)
That's kinda irrelevant, but you're right, you can't. However K9 and other suspension tuning companies provide a service whereby they measure all the fork, shock, bar and frame movement throughout a track and follow it on GPS to get you the perfect system. It is a bit over-sized and fidgety, but it works. Although, from what I've overheard, plugging in shock might be just round the corner; look at Fox's new electronic shock pump for setting sag and recording set up. Honda had a cheeky set-up in 07 like the MX guys, but that's all hush hush.

neondion (Aug 9, 2011 at 20:12)
i hope he comes back to kamloops for another shot at the JAH drop! here in kamloops that is what it is called not JAW..would be fun to try even a 10 footer on that thing just to see how it handles

bikeracer28 (Jan 8, 2012 at 8:13)
wow, a super monster t(12 inch travel fork) with two fox, what appear to be 9 inch travel fox shocks. that outrageous. and is it seriously josh bender's new bike? cause if it is, i hope you tries the jaw drop on it. looks a lot better than the bike he rode, in i think nwd 2, when he hit the jaw drop.

RelentlessMTB (Oct 1, 2011 at 8:16)
The rear swing arm can only travel so far before the bottom of that seatpost completely pile drives into a grand worth of rear suspension.

AdamChed (Apr 23, 2012 at 20:53)
Just the stress alone from whatever it would take too bottom out both those rear shocks, would be enough to snap that frame right in half. Thus making it a pointless endeavour to build this thing.

furious-speed (Aug 25, 2011 at 9:22)
Im quite sure that two shocks will work just the same as one would. Stupid bike but kinda cool in a funny way!

personally I love it, a true hucking machine!.

RockyMountainRMX (May 23, 2011 at 12:11)
well if you have one shock it takes the entire load of an impact correct? so if you have two they'll each take part of the load. and if this is Benders new bike this might help him land the jaw drop in BC. but if not its just for show lol

brewer22 (Jun 3, 2011 at 21:14)
lol Having two shocks side by side does not increase travel. Travel is the distance that the rear axle moves. Having two shocks just makes it possible to run a stiffer suspension set up and distribute the forces of the impact more, meaning your less likely to damage your shock.

dmacrostie (Jun 22, 2011 at 20:39)
Oops...I didn't realize brewer22's comment got posted right before mine. My "^^^false" was for the dumb explanation made by RockyMountainRMX

bikeracer28 (Jan 8, 2012 at 8:30)
brewer22 is right, the travel is how much your rear axle moves, the shock is just there to soften it as it moves and control how fast it moves. putting the 2 shocks will not increase the travel at all, just make it a lot stiffer and ad a lot of weight. lets say for example we adapted my lucky 7 (7 inch travel bike) to fit two rear shocks, whether they are in front and back of eachother(which is impossible without a custom built frame) or side by side, the frame can still only travel 7 inches, so since they wouldnt fit in front and back of eachother, you would have to put them side by side. so put two 7 inch travel shocks, such as my van r, next to eachother, and bolt them on to the lucky 7 frame with the new wider pivot points to accomodate the 2 side by side shocks. the frame still will only have 7 inches to move back and forth, just it will move a lot less per weight per square inch. so basically when josh hits a big drop, he can land and use a lot less of his travel, cause the normal resistance of a single shock is doubled, but, he will still only have 9 inches(or 8, not sure how much travel the frame has).

bikeracer28 (Feb 16, 2012 at 13:51)
@cyfa89, in a way yes, in a way no, a fork actually travels the the full distance that the stanchion is, whereas the rear moves based on where the pivots are and how far back the rear wheel is. but yes, you could possibly do a few different combinations, but im not sure how well that would perform with 2 differently setup shocks right next to eachother, it might make it uneven and possible bend your stay or linkarm.

cyfa89 (Feb 16, 2012 at 15:13)
Yeah i meant similar to a fork, in that the shock still has a stanchion and travels whatever it is designed to (along with consideration for the frame).

Could go wrong but i presume that theyre close enough to act in unison and thus act as 'one' shock.

Like my stratos fork, has 3 springs in each leg for tuning. If you ran a hard spring in the middle on one side and a mid on the other you get a different result etc. for each setup. Should be made sttrong enough i would have thought.

santascruzing (May 28, 2012 at 2:20)
what a bag of shite. i like new concepts but this is just getting ridiculos top band manufacturers have already proved you dont need stupid bikes like this to go big or to ride dh. what ever happened to the good old days 1.5 inch of travel abag with some soggy sandwichs and a helmet that bareley fits.i cant see this being riden to the shops let alone cross country riding. ovekill comes to mind oh and the guy who invented it is abit of an attention seeker. nout wrong with a good old hardtil beneath you and 120mm of travel up front 10ft pah try 100ft. bender can keep his bag of bolts im happy with my santacruz jackal

elchris123 (Jun 22, 2011 at 1:33)
3.0 wide. Duro makes that specific tread pattern in three different compounds. They also manufacture them for Arrow Racing (who just re-brands them)

I ride with the same wheels