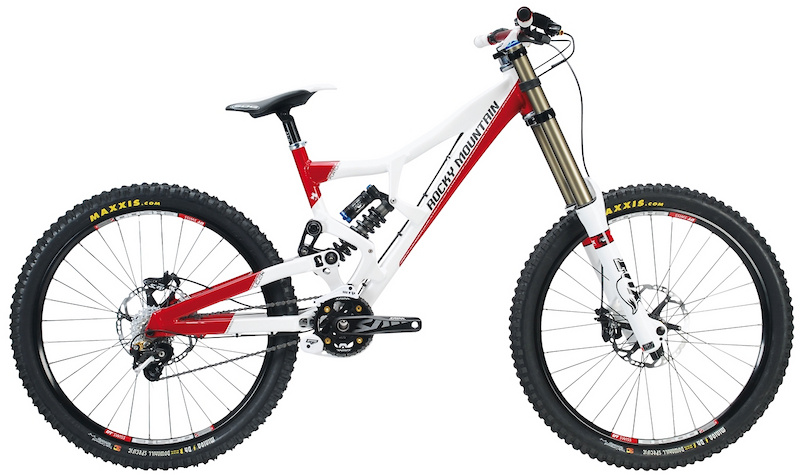 St-PoK (Mar 14, 2013 at 19:46)
im still a beginner, i've only rode one season with mine, but i must say, that bike will eat every bumps, gaps, drops, rocks, anything you give it. its heavy, with 42lbs, but it will only make it go down faster. Maxxis tires are nice, but you will lose chips and chunks quite fast. But you still can ride at least 2 years with them if you switch them every year. Brakes are freaking good, easy to find that sweet spot to brake enough without stopping the wheels. I got my handlebar cut 2" (1" both side) only because it felt too long and i honestly have a better stability now.

The bike isnt cheap but you got what you paid for.
[Reply]

Cons:
a little heavier than some WC race bikes : Shifter housing takes a bit of a thrashing from the chain : Doesn't have the over-the-top, curvy hydro-formed tubes so popular with the kids these days (but maybe that's a plus?). No longer Hand-Made in Canada

Review:
Coming off Sunday with a pushed DHX I was a little nervous about my move to a Single-Pivot frame, but after swapping the 450lb stock spring for a 350lb (I weigh 155lb) the rear end tracked brilliantly! Small-bump compliance is better than I ever experienced on my Sunday and the suspension has a smooth ramp-up giving the bike a nearly bottomless feel.

In spite of a slightly longer wheelbase than the Sunday the cornering performance on this bike feels far superior and definitely has a "snappier" feel to it. Although the bottom bracket height is quite low (13.8") the bike seems to sit up quite well when pedaled hard and so far I haven't managed to catch my pedals in any major way (something I lived in constant fear of on the Sunday).

Perhaps the most pleasant surprise was how well this bike jumps. I never been the most natural in the air but the Flatline has boosted my confidence no end when hitting big steep lips - The bike feels both stable, yet flickable at the same time. One aspect of the geometry I really like is the unusually steep 74 deg Seat Angle - I find that I can run the seat quite high (good for when I get a bit lazy on a race run!) yet it stays completely out of the way when jumping, manualing, or squashing the edge of a big, nasty drop - The beauty is that in these situations the seat pops up between your knees instead of smacking you in the ass! Gone is the quick-release on my seat post!

The rear end is super-stiff and so-far has zero play. Although the LCR2 linkage looks complicated, the shock is very easy to remove (I had it out several times while trying different springs). Also, I ride in the mud a lot and this bike cleans up pretty easily (The shock and linkage don't seem to collect much crud). Rear thru-axle threads into a (replaceable)steel insert rather than directly into the softer aluminum and fastens with just one pinch bolt. Finally the construction of this bike is really solid and looks like it could be thrashed season after season rather than just being a throw-away race machine.

That said, it is a little portlier than some other pure-bred race frames, though certainly not excessively so. My build came in a 41.7lb and that is with a steel spring - I expect to be below 41 once I go Ti. The only other complaint I have is that the shifter cable is subject to a good amount of abuse from the chain. Of course this is easily fixed by running it through some tubing or wrapping it, it only really bothers me as it looks like Rocky Mountain was 95% of the way towards having internal routing on the rear end (the Chain Stays are open at both ends) but failed to put openings in the dropouts for the cables to exit. I'm tempted to drill my own holes... but I wont!

Overall, a fantastic handling race-bike that inspires speed and confidence at a very hard to beat price... Would definitely buy one of these again!
[Reply]

Kw470g (Apr 28, 2019 at 15:23)
My dad owned one before then he regretted why he sold it before. Now I’ve got same Worldcup model but it’s custom build. It’s totally sick as f*ck. It doesn’t matter how bumpy you ride. One of the Downhill bike that has a Fox racing shox suspensions.
[Reply]

gablap15 (Sep 18, 2011 at 17:41)
This is a f*cking beautiful and great bike! One of the best ever made! Pretty expensive but this is the price for quality like that!
[Reply]
Login or Sign Up to write a review.
You must login to Pinkbike.
Don't have an account? Sign up

Join Pinkbike  Login
22
Avg: 5 (4 votes)
Write a Review
Rocky Mountain 2011 Flatline World Cup (MSRP $6000) — Rocky Mountain developed one of the first legitimate downhill race bikes over a decade ago and in 2009 we won more World Cups than any other brand. Flatline WC is the culmination of an extensive R&D project working with Team Maxxis-Rocky Mountain and six World Cup wins later, it now can be yours.

Specifications Compare to other DH Bikes