I race downhill and enduro around the country for fun, and have my own wheel building business with a friend $950 USD
I got a great fox 36 factory fork with the push conversion kit in. The fork was just serviced, and has not been ridden since. It's in great condition, rides great, just got a 38, so dont need it anymore. Contact me for photos

$5300 USD
I got here a fantastic yt jeffsy cf pro race. It's in great condition, and it's mostly stock besides a few little upgrades here and there. This is an amazing bike for sure, super playful and extremely light. It's full of carbon everywhere it can reducing the weight to 28 pounds! It has carbon frame, carbon bars, carbon wheels, carbon cranks, and even carbon drivetrain! Anyways, this is an amazing bike I can guarantee you will love. And aspecailly because this is a 29er, there are rarely 29er jeffsy for sale, so jump on this one before its gone! Build list: - yt jeffsy cf pro race carbine frame, boost - fox factory 36 fork, kashima, grip2 damper, boost - fox factory dhx2 shock, kashima - fox factory transfer dropper, 150mm drop, kashima - pnw loan lever, blue to match da bike - e13 carbon trsr wheels, hand built on e13 race hubs - e13 trsr carbon cranks - full shimani xtr drivetrain, absolute black oval chain ring - sram guide RSC brakes, 200mm rotors F and R 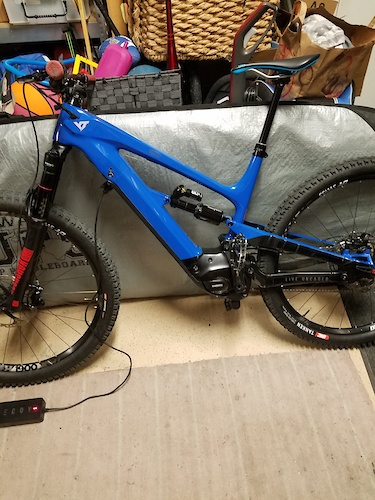 $6400 USD
I got here an amazing yt decoy. Only has 300 miles on it, and it's in great condition. It is hard to get your hands on one of these, as there sold out till next year. Everything on the bike is upgraded, so It has an amazing build list. I'm just gonna say this now. Yes, it's an extra large, but it does not really feel like it. I have a size large yt capra, and it feels the same size as that if not smaller, just saying. Im pretty short to, and I fit fine. Anyways, like I said, with the small amount of miles it has, it has so many left to go. Build list: - carbon YT decoy frame. 29" boost - rockshox lyrik fork with push ACS conversion kit, makes it the best fork ever - cane creek double barrel shock. Definitely my favorite. - YT postmen dropper and lever, 150mm of drop. Same thing as sdg tellis dropper - renthal fat bar 35 carbon bars - sram code RSC brakes, there the really nice ones with contact point adjustment - shimano 203mm ice tech rotors front and rear - full shimano 12 speed drivetrain, very smooth - dt Swiss wheels and hubs wrapped in IRC tires which are pretty much new, they are bassicy maxxis minion tires, with cushcore front and rear - shimano e8000 motor with shimano e7000 display, super nice setup, same set up used on all the models, because it's so good. The motor runs super strong, the whole bike only has just over 300 miles on it. So it's pretty much new, with thousands of more miles to be put on it before anything has to be replaced.(usually the battery goes bad before anything else). This bike makes climbing just a fun as desending. As it makes the 1 hour long 1300ft climb I usually do a breeze, only taking no more than 15 minutes. Anyways, the bike is super fun, and you will love every second of riding on it. You can contact me for more photos.