On the washout day early in the week of Crankworx Rotorua, Louis Hamilton of New Zealand found himself suddenly being mobbed in the pits. The reason; he was walking around with one of Commencal's new Furious model bikes. Louis had a pretty interesting mix of components from across several brands, especially where his drivetrain is involved, but the frame itself was what got people worked up, given that it's not been seen in the wild much, if at all. Not having a specific drivetrain sponsor has allowed Louis to run a mix of components that he likes in this area and the bike was running on Fox suspension front and rear.

Louis was really enjoying the ride and noted that the 200mm of rear wheel travel felt like more, thanks to the progressive nature of the rear suspension. He had the Fox 40 up front set to 200mm and found that it was a great setup for the bike. 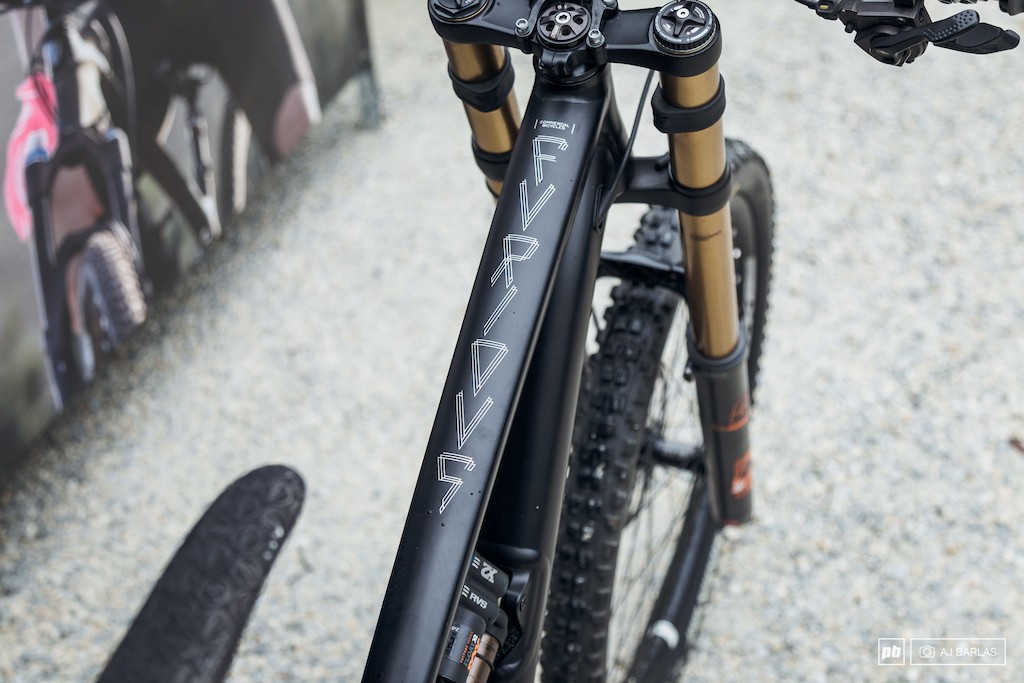 • Saddle position – Back from center
• Tilt – Layed back 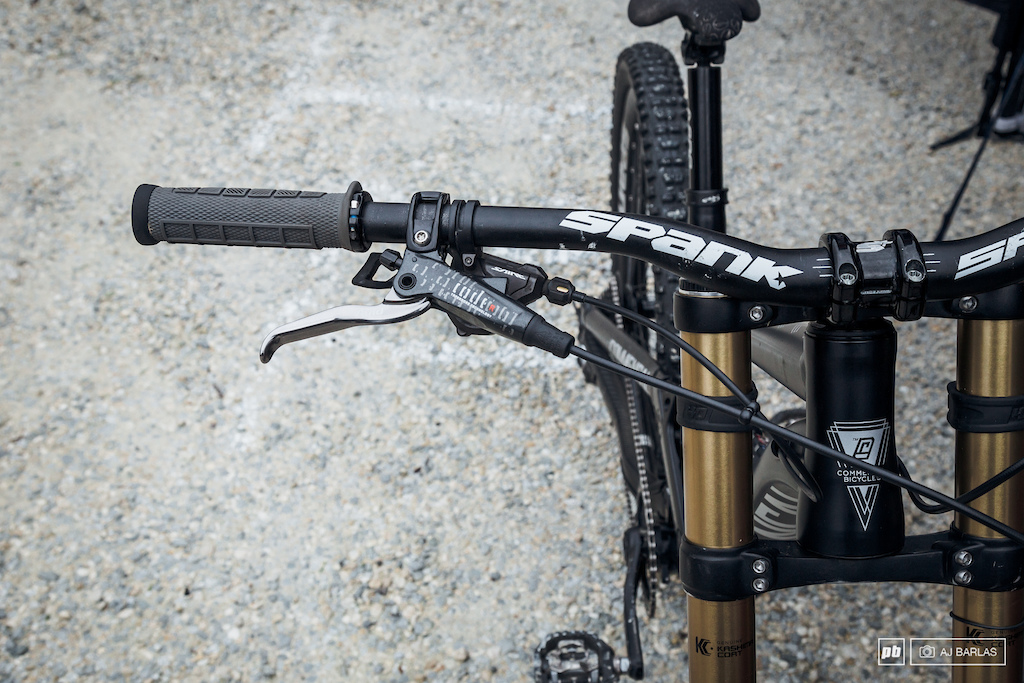 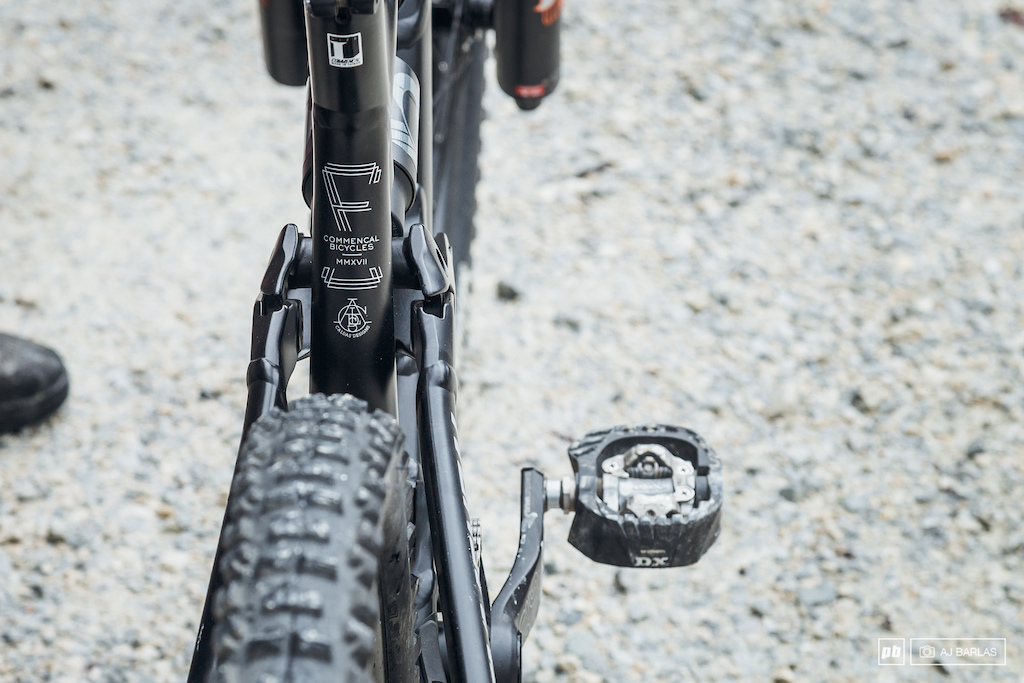 Any customizations or peculiarities?
• The bike comes with moto-foam for under the shock
• It also comes with a new rubber chainstay protector that Commencal will be using on a range of their bikes. It's far softer than regular protectors and really dampens out the sound.
• Louis really likes how progressive the Furious is. He finds it hard to believe it's 200mm of travel and not more. 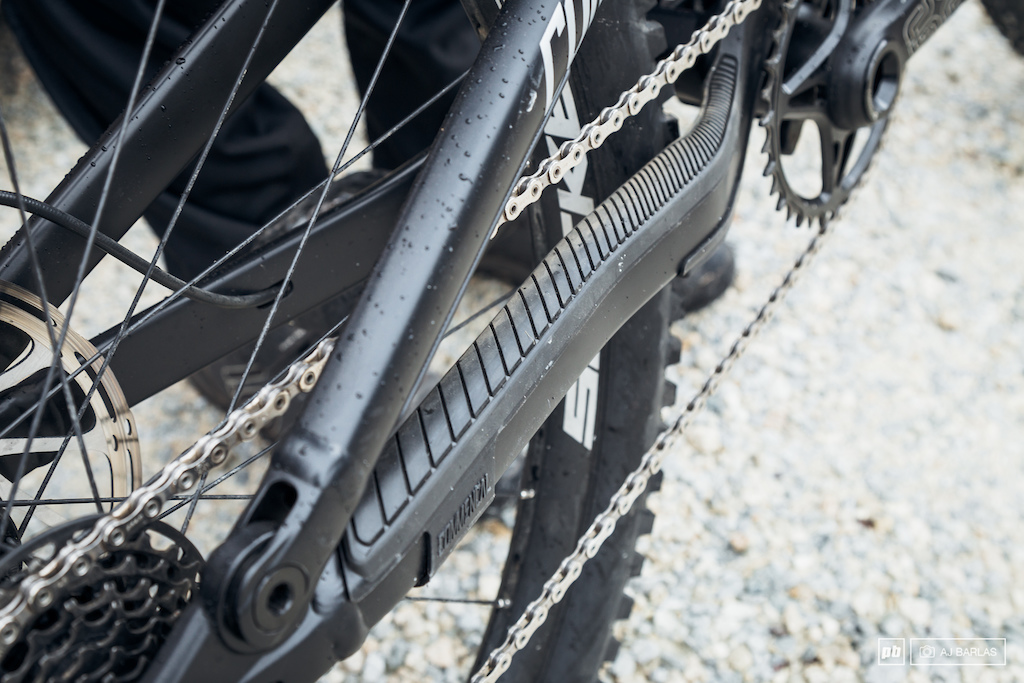 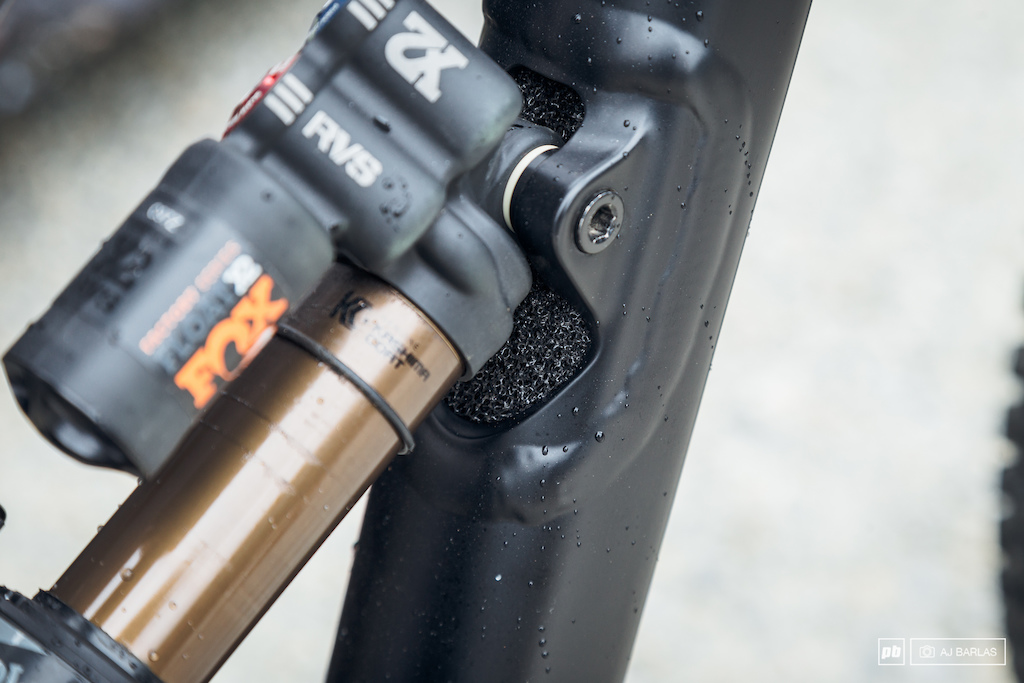 Commencal is providing moto-foam with the Furious bikes too.

burnadette (Apr 7, 2017 at 11:53) (Below Threshold)
YT Hit the mark with the Tuesday. Now all the other smart companies are reading the design trend and adding it to their development... Design sells, but not without function.

nojzilla (Apr 7, 2017 at 23:15)
All the people saying it looks like a YT.. You do know the Furious has been around aboot 10years longer than the Tu es.. Right... Or Any other bike with a similar silhouette. This is just an updated front end for the Furious Also if you really know anything aboot frame desighn you'll know they are nothing alike

mazze (Apr 9, 2017 at 10:46)
@nojzilla: lol I know the old furious very well... my girlfriend rode it for years and the new one doesn't look anything like it at all. You don't know what you're talking about m8.
@src248: I took 2 random pictures in different resolutions and taken from different angles... if you need a tip, look at the tires. Otherwise they would align pretty much PERFECTLY. Bring on the neg props I don't give a shit.
Btw the comment alone (with 55 upvotes) suggests, that it obviously looks like a YT. LOL
You need to have your eyes fixed.. or brains. But whatever, I'm outta here. Have fun with your sophisticated discussion about frame design.

nojzilla (Apr 9, 2017 at 11:53)
@mazze: I also know the old Furious very well.... I Rode one for 5 years...
Look at the chain stay and main pivot point, identical (apart from the wheel size) faux bar seat stay near identical, shock placement and linkage placement, almost identical but worked into a new front end with a longer shock, hence more travel
Let's look at a YT.... Four bar pivots with completey different linkage tune etc etc
Ynow what I can't be bothered.......

mazze (Apr 9, 2017 at 15:25)
@nojzilla: Ah so now you are talking about linkage tune, which has exactly nothing to do with the eyecatching similarities of the frames? You're correct, the only design difference is the pivot point position, just enough that it can't be called a Horst Link with its rear pivot on the seatstay rather than on the chainstay. It still uses the same principles, though.
However, as far as the shock mount, shock position and main pivot point are concerned, you are totally lying. They are actually way closer to the Tues than to the old furious, which had its main pivot point located at the downtube wayyy in front of the bottom bracket. Now it's located at the seat tube like, surprise surprise, with the YT. So far the technicalities... But you know as well as I do, that the argument was about the overall shape of the frame. Nice try though.

The bikes are NOTHING alike

burnadette (Apr 10, 2017 at 9:39)
@NickB01: I didnt get that far into the company's naming convention... Sorry for looking foolish, but you cant really expect an ignorant american to assume that the name is german for "do it," rather than the 3rd day of the week, my bad. Im an uncultured pig right?

and @src248, yeah, im pretty sure the swing arm and the rear end geometry looks similar enough to the TuES to make them appear as though they are sharing some design language...

nojzilla (Apr 10, 2017 at 10:34)
@mazze: "the old furious, which had its main pivot point located at the downtube wayyy in front of the bottom bracket. Now it's located at the seat tube like, surprise surprise, with the YT."

You do have eyes yeah? So you can see that the seat tube on the new Furious connects "wayyy in front" of the bb, compared to the old Furious that had a straight seat tube. So main pivot on both biked are identical it's the seat tube that's different

Care to point out how I'm a liar????
Calling you out bitch

mazze (Apr 11, 2017 at 15:43)
@nojzilla: I explained it to you once, maybe you need to read it twice for it to sink in. The main pivot was on the downtube on the old furious, now it is - just like the YT - on the seat tube. Whether it is slightly in front or back of the bottom bracket is insignificant. In fact it had to be in front to still feature the faux bar and forego the Horst Link. That alone more than proves my point that it's looking closer to the TUES than to its older sibling.
Sure I have eyes... but do you have a properly functioning brain? Let me explain it one last time for you:
I never said the linkage design was the same (actually quite the opposite as I said that this was the only difference between the two) BUT the FRAME LOOKS the same. And you actually just proved that very point for me with your argument about the seat tube. Thank you.
Oh and you are calling me out a bitch over the internet? You must be one tough son of a bitch then... LOL.
That's real class from a 42 old gentleman. Go back to riding your pink commencal, fanboy f*ggot.

f*ggot??? Keep it up homophobe

achemdog (Apr 2, 2020 at 17:15)
@nojzilla: Everyone chill out ...YES THEY KINDA LOOK CLOSE TO EACHOTHER, BUT ONLY IF YOU ARE BAKED.... THE COMMENCAL LINE HAS HAD THAT SINGLE PIVOT DESIGN SINCE LONG BEFORE YT... I AM A BIG FAN OF BOTH, YET IF YOU LOOK AT A 2010 COMMENCAL PRODUCT,A 2018 COMMENCAL PRODUCT, AND THE NEW YT DESIGNS... YOU WILL CLEARLY SEE THAT COMMENCAL HAD THE SAME PROGRESSIVE LINK LONG AGO... SO IF ANYONE IS A GRAVE-DIGGER FOR OLD TECH, IT IS YT. OTHERWISE YT WOULD BE SEEING THEM IN COURT .

makak178 (Apr 7, 2017 at 12:46)
Am I the only one that would like to see sag % front and rear in the bikechecks? It would tell more about the setup than pressures, with all the different shocks and frames...
Nice bike btw, and good work pinkbike on all the details like bar roll etc.

petehvid (Apr 7, 2017 at 14:09)
Its seems like most of these racers don't pay attention to sag % so may not be able to give that figure. See Remy's appearance on the last Vorsprung Tuesday Tune

Dhsteez (Apr 7, 2017 at 20:55) (Below Threshold)
often times racers at this level run 0% sag so thats really not a good way to measure super top level racers

nojzilla (Apr 7, 2017 at 23:22)
@AJBarlas: I'd really like to see some differences between race an FR tunes. Like coil/air wieghts an dial settings. As a rider who liked to ride the jumps as maybe a bit more than than DH gnar.. I'm finding it hard to get settings that are good for both. compression settings over coil wieght?
(maybe a good ask PB question

P.s I had a mk1 Furious an just traded up to supreme park, bit gutted now there's a mk2 Furious :/

jaame (Apr 7, 2017 at 17:38)
@femto505: unfortunately for him, he has not been romantically involved with Nicole from Pussycat Dolls, spanked and F1 car, made millions of dollars or smashed a load of cocaine in the recording studio with Pharrell.

ivankvkharkiv (Apr 17, 2017 at 7:07)
Interesting note. Nobody rides without chain guide nowadays(usually with chainring guard)... Once I herd and opinion that with N/W chainring we don't need it but I disagree.

midwest-division (Apr 7, 2017 at 15:43)
Here I was all set on the DH V4.2, until this thing surfaced! I love this new bike, just cant get use to that seat tube dangling down above the shock.

ARonBurgundy (Apr 7, 2017 at 11:33)
Side by side. Commencal seems to be billing the Supreme as a race only bike while the Furious is for the non-racer/freerider/park rat.

slayersxc17 (Apr 8, 2017 at 5:58)
These bike checks are awesome. I think you guys should go to whistler, grab a regular dude from the lift line, and do a bike check.

tcmitchell (Apr 7, 2017 at 13:46)
@AJBarlas: I think what he was trying to ask is how saint it able to work with the new 11 speed spacing of the X01 cassette using a 10 speed spaced shifter and derailleur?

watchtower (Apr 7, 2017 at 15:24)
The angle of the picture creates the illusion that the air can valve will be making sweet love to the reservoir, that's a feature worth having.

jaame (Apr 7, 2017 at 17:40)
My Nomad has full bespoke chainstay protection, which is very nice, but it is very noisy. I would love to get something like this. It looks super quiet.

Smokey79 (Apr 7, 2017 at 23:06)
I think the only difference between code and code r is the contact pad adjustment (so prob lighter and less to go wrong I guess). I had code r and they were amazing. Now im stuck with rubbish guides

mhoshal (Apr 8, 2017 at 4:02)
@DandelionDan: I know I own a pair and I also still have original code 5's and new codes and they all work awesome and nowhere near a low end version. Yes they are a little more cost friendly then the codes but definitely not low end!!

liamdonohuemedia (Apr 7, 2017 at 20:06)
I found a way around this, I cut up an old tube to go from the seat tube around the bottom link and attach to the down tube under the frame protecter with the bolt by cutting a small hole in it. To get it to stay on the down tube I used a zip tie. Doesn't even look bad.

cjkj1999 (Apr 7, 2017 at 12:38)
Because they're the two biggest suspension brands that have budgets to sponsor many athletes also because they didn't become the biggest two companies by having crap products

apatipsychonaut4 (Apr 7, 2017 at 12:44)
@cjkj1999: it's not like i'm saying it's shit you know haha,i really respect those brands and i've ridden their suspensions and they are amazing. But sometimes i'd like to see different brands on the scene/the spot as famous as these two. You get the point bruh