Kirk McDowall is like the under-the-radar mountain biking version of Ryan Gosling in each of his movies. The guy likes to ride his motorcycle, flip his blonde hair over to one side and carry out conversations using as few words as possible. The 22-year-old has been quietly ascending the ranks for the past few years, and you can also usually find him on a podium on the Northwest Cup circuit, and more recently, climbing past alot of big names on the World Cup results sheets.

We decided we wanted to strip everything away and just let the riding do the talking in the first piece of a string of videos coming out over the rest of the year. With Kirk, we spent a few days at Harper Mountain in late July to have fun and get loose on the hot and dusty trails that Kamloops is partially renowned for, and focus on creating something that was definitely a little bit different.

Kamloops is hot as hell in July, but the allure of traction-less dust and rocks is apparently tantalizing to downhillers. Sunshine in the trees has the reverse effect on filmers, but we did our best to make it work by leaving the hottest (and spottiest) parts of the day open for relaxing around nearby Paul Lake, which was in full tourist fury at this point in the Summer.

In order to capture an accurate representation of each section of the trail, we suited Kirk up with a custom-rigged "braudio" device using some bungee cords, electrical tape and a conveniently uncovered motocross chest plate which we could all Macgyver together. By the end of the audio recordings, it was safe to say that Kirk had a newfound respect for female athletes and their ability to perform carrying that extra baggage up front.

Harper is fun, fast and rowdy. With the Summer coming soon to a close (sorry), the dust will soon be settling and the clouds returning to block out the sun. That being said, fall riding in BC is quite possibly the best, so we'll be looking forward to some more rides and epic sunsets. 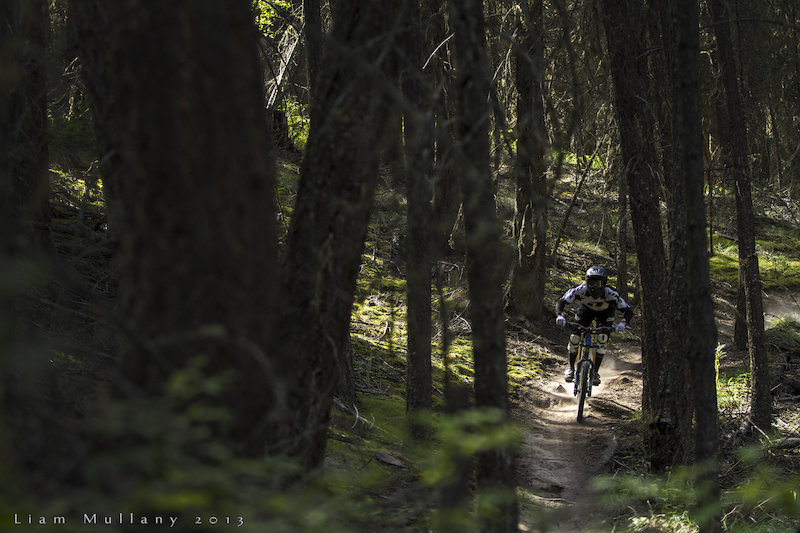 Over the next several months on Pinkbike, we'll be releasing many more short "Over The Edge" episodes through the EpicTV channel highlighting different riders, locations and stories around BC. Stay tuned for everything that we're working on!

mtloldskooler (Aug 21, 2013 at 19:20)
Imagine that, actually hearing the riding in a riding video. Awesome. So much better than the regurgitated electro-pop dubstep dance garbage we usually get. If it ain't metal, this is what it should be.

Loony0 (Aug 21, 2013 at 21:05) (Below Threshold)
would have been even better if they never added wind over the top of the original audio, so much for it being an edit just using the raw videos... lol

AbsoluteZero (Aug 21, 2013 at 21:08)
That was real wind homie. Except for the slow motion sections, we added some ambient tones behind that or else it just wouldn't have worked, but we were rolling with a binaural microphone which captures "3D Sound" the way the ears hear it.

solocoyote (Aug 22, 2013 at 6:01)
Amen mtloldskooler the garbage music they have been putting on these videos makes me mostly not even bother watching them, or at least muting them.

norcaljedi (Aug 22, 2013 at 8:05) (Below Threshold)
no.. some one get this guy some mastic tape to quiet up all that chainslap I was hearing..the is no need for a clutch derailleur if you know how to set a bike up properly..

david1978 (Aug 21, 2013 at 20:40)
Someone should turn off the fast forward on that cut. Holy crap that's fast! My kind of riding! Awesome cut, leaving out the music was genius! Really allows you to focus on the riding being done with distraction.

chezotron (Aug 21, 2013 at 21:28)
Yes! It was really cool to see a whole edit in mostly real time with real sounds. It helps to hear where people are braking and skidding and just letting loose. As much as I like music to help me relate to some videos and get me stoked this one just plain gets me stoked because I feel like I'm right there. Good work fellas!

bigloaf (Aug 22, 2013 at 19:59)
Love this video, this is what it's all about! Dudes who ride with music in are missing out on the song of the trail...and it's a beauty. The sounds of nature, and your bike; even your own breathing are all part of the experience, and not one to be missed!

aztrialer (Aug 22, 2013 at 9:38)
The only noise I love more than the sounds of my bike is women screaming my name, but that doesn't ever happen

CheryBomb (Aug 22, 2013 at 11:36)
Оh, I liked this so much. No music is pure awesomness. Looking forward to see this trend in other edits. I also enjoyed Specialized vidz from WC, you can notice they don't use music too.

Sshredder (Aug 25, 2013 at 10:57)
Brilliant! I luv bike sounds. Would have preferred to have some of the mike placement on the trail. I can see a progression of this type of filming. Very innovative . like it!

daddyurbs (Aug 22, 2013 at 2:39)
lmfao @ if it ain't metal this is what it outta be.We definitely would call people screaming @ the tops of their voices enjoyable.

MattHoffman (Aug 22, 2013 at 8:40)
I would rather hear the sound of a bike articulating, and tires gripping than %90 of the tripe pawned off as soundtracks.

aucky (Aug 22, 2013 at 13:11)
Nice,all videos sould be like this,hearing the noise shows you what light speed he is traveling at and you can still listen to ur own tunes instead of the same crap songs people put on videos.Ban music edits on videos now.

shooby (Aug 23, 2013 at 1:13)
that was sooo impressive! getting a real good audio on that kind of edits is pretty unique and some how refreshing! makes it way more thrilling! more, more, more!

kurt-heering (Aug 21, 2013 at 22:08)
Awesome video but you should consider getting a shadow plus or clutch deralieur

stumarin (Aug 22, 2013 at 3:01)
much better than the usual shit music they put with these videos, oh and the gear change sounds very nice indeed!

jedrzeja (Aug 22, 2013 at 4:42)
I like the soundtrack. Waiting for times when rolling tires instead of a bouncing chain will be the loudest.

steveco (Aug 22, 2013 at 6:55)
Nice work Liam. Great colour and I especially liked the slider/jib shots. What were you using for those?

dylanevolvebikes (Aug 22, 2013 at 11:28)
if you guys ever ride there, call mostly mental shuttles. they can shuttle you all day there for a really good price.

Fadednegour (Aug 21, 2013 at 20:39)
so stoked on this video but i would really love to see kona stinkys make a comeback please