Back in 1999, an 18-year-old Greg Minnaar arrived at the UCI world championships in the small mountain town of Åre in Sweden, looking to get a gold medal before leaving the junior ranks. But the steep, technical course and the wet and muddy conditions proved to be a bit of a handful for the young South African that day, landing him in 6th place. "It was my worst world championships as a junior. I came here to at least get on the podium as a junior", as Minnaar recalls it. 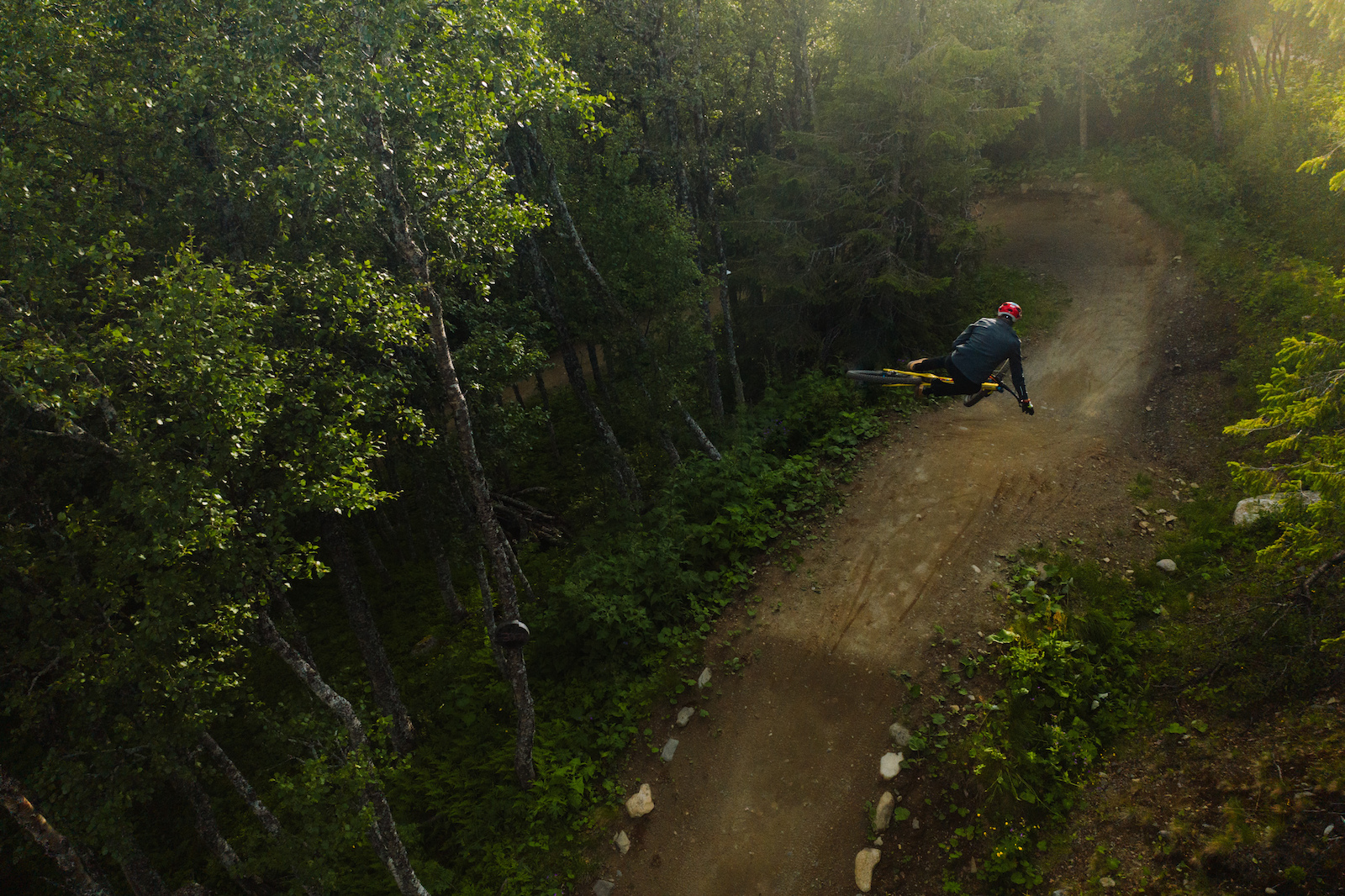 Who said downhill racers don't have style?
In 2001, just two years later, he did just that as a senior when he rode home a bronze medal in Vail, Colorado. And another two years on, he claimed the top spot in Lugano, Switzerland, and got to pull on his first rainbow jersey. In 2012 he won his second gold in Leogang, Austria, before making it back-to-back victories in his hometown of Pietermaritzburg the following year. And then, in August this year, at the tender age of 39, he snatched his fourth set of rainbows in a thrilling race in Val di Sole, Italy, 18 years after his first title. Add five silver and three bronze medals to that tally, alongside 23 world cup victories, and there's no wonder we call Greg Minnaar the greatest male downhill racer of all time. 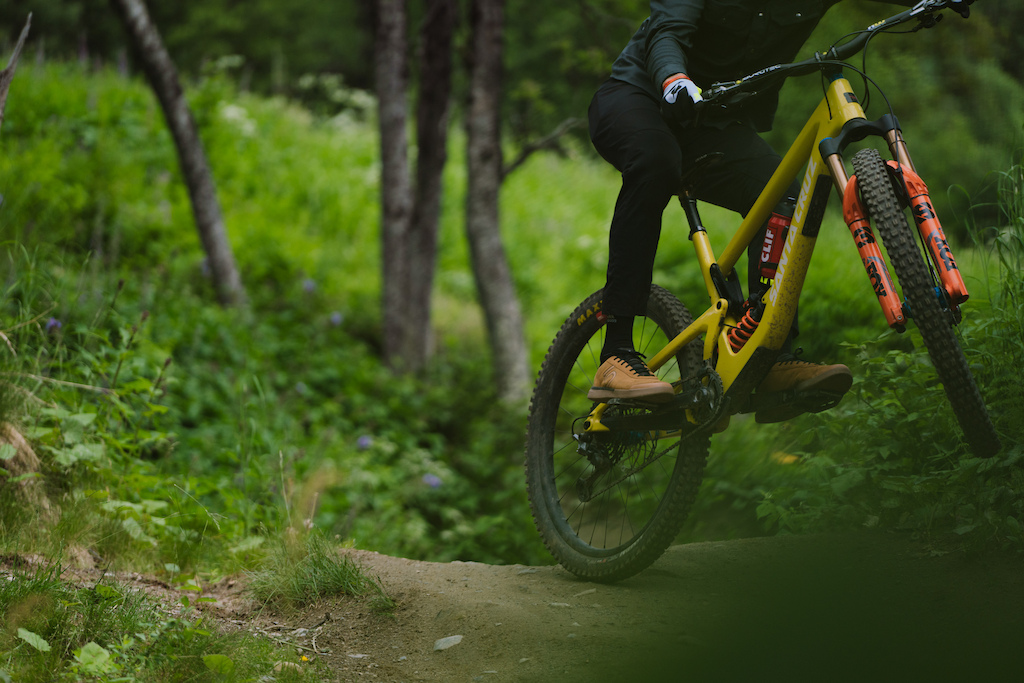 Minnaar on the back foot for once.
But even world champions and legends need to let their hair down every once in a while. So when Johan Lindström, organizer of the 1999 world champs as well as the annual Åre Bike Festival, popped the question to Greg if he wanted to come to Sweden at the beginning of July this summer, right after the Les Gets stop of the world cup, the answer was a resounding "yes". 22 years after his latest visit to Åre, Minnaar found himself in a vastly different mountain town that has grown substantially in the days since the 1999 championships. These days, Åre Bike Park is Scandinavia's biggest bike park with 35 trails and a maximum vertical drop of 872 meters (that's 2 860 feet in freedom units) and a buzzing local bike scene. 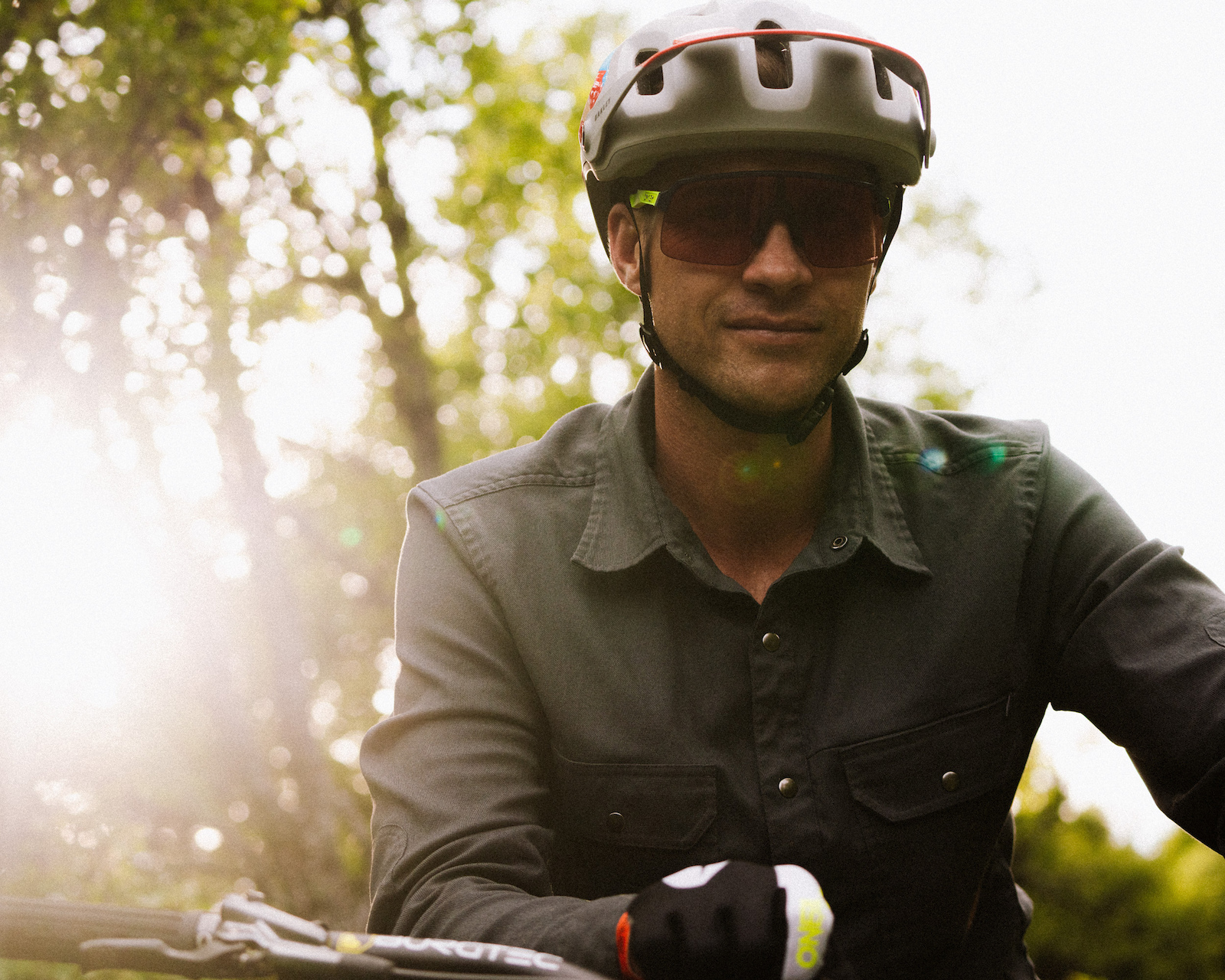 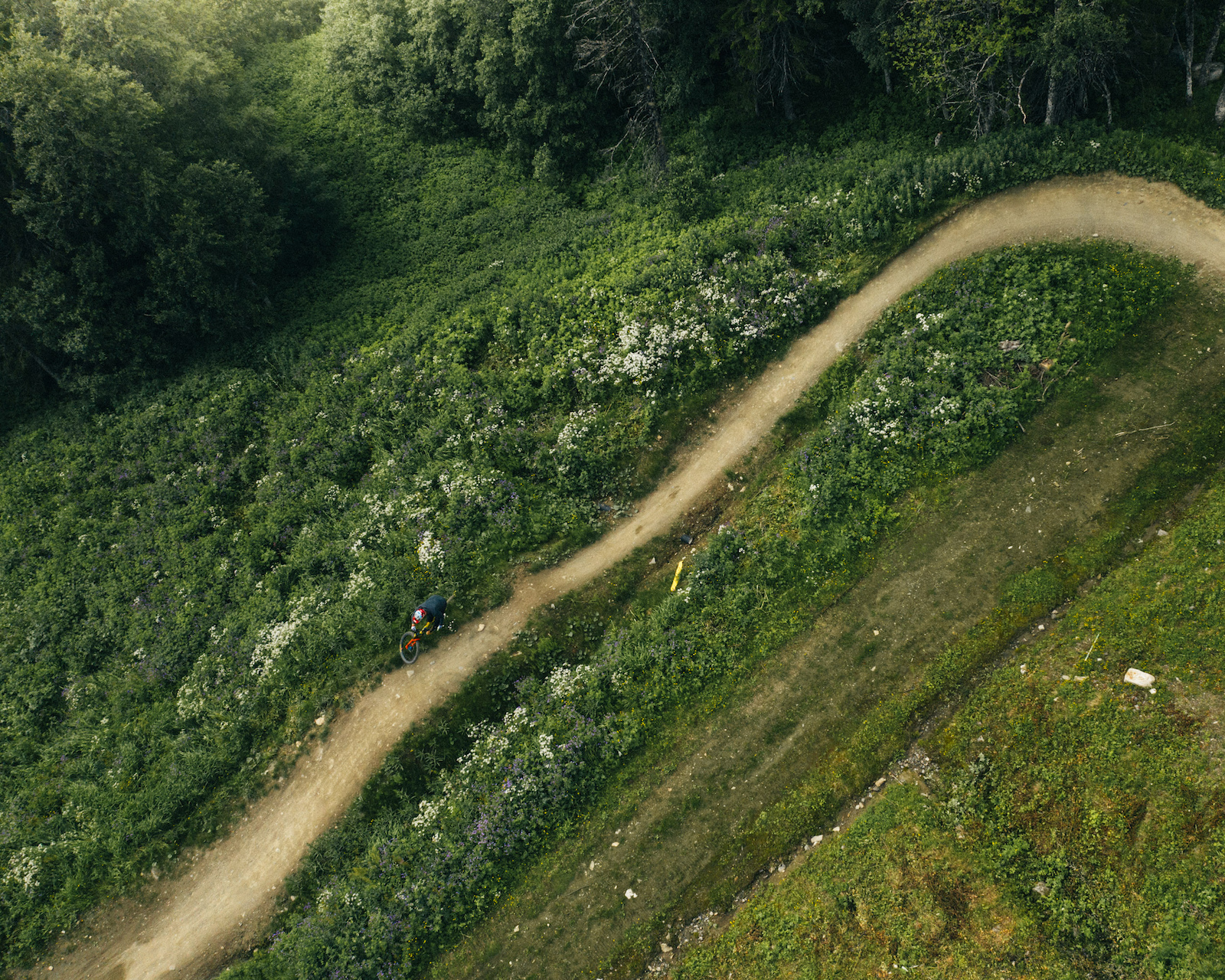 Blue steel and brown ribbons of dirt.
The festival offered the chance to ride lift-accessed trails at midnight, judge a whip-off contest, explore hidden gems in the Åre valley and experience the Swedish bike scene in all of its weird glory. And have a few beers as well. After all, Rob Warner was in town to host the daily webcasts. We'd like to think that the week in Åre helped Minnaar to regain his focus on the bigger task at hand a few weeks later, the one that earned him his fourth rainbow jersey and world championship gold medal. 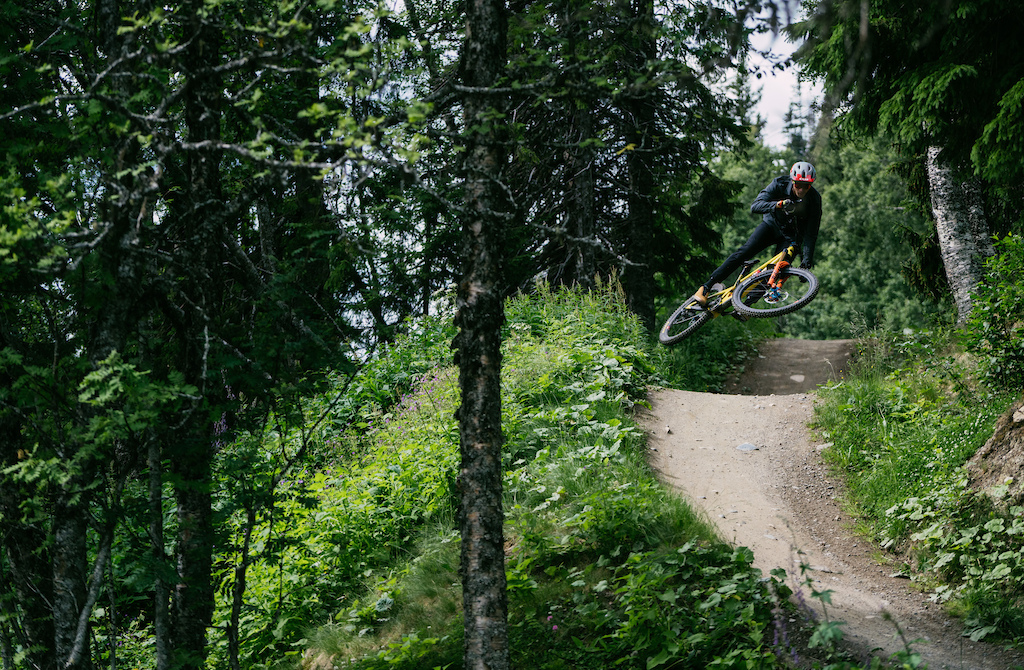 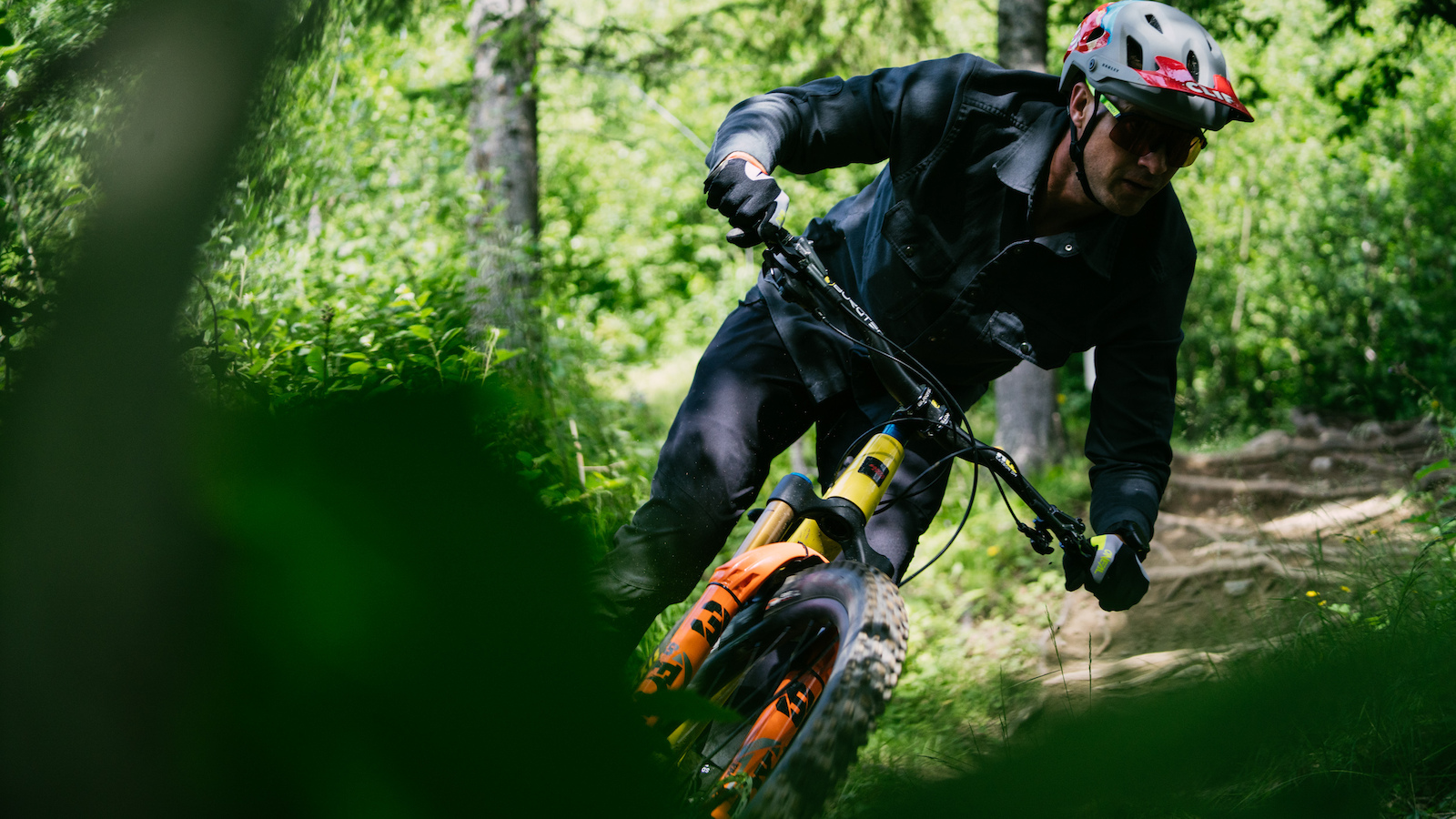 The focus of a true champion. 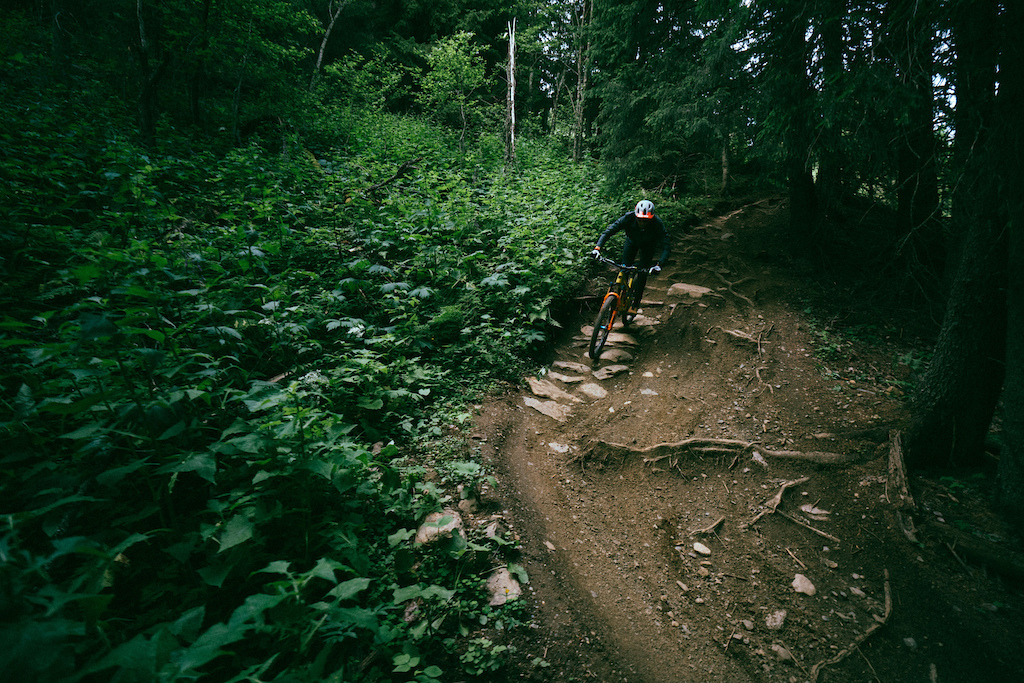 Tjarnis is one of the steeper and tighter trails in the Are Bike Park, no match for a four-time world champion. 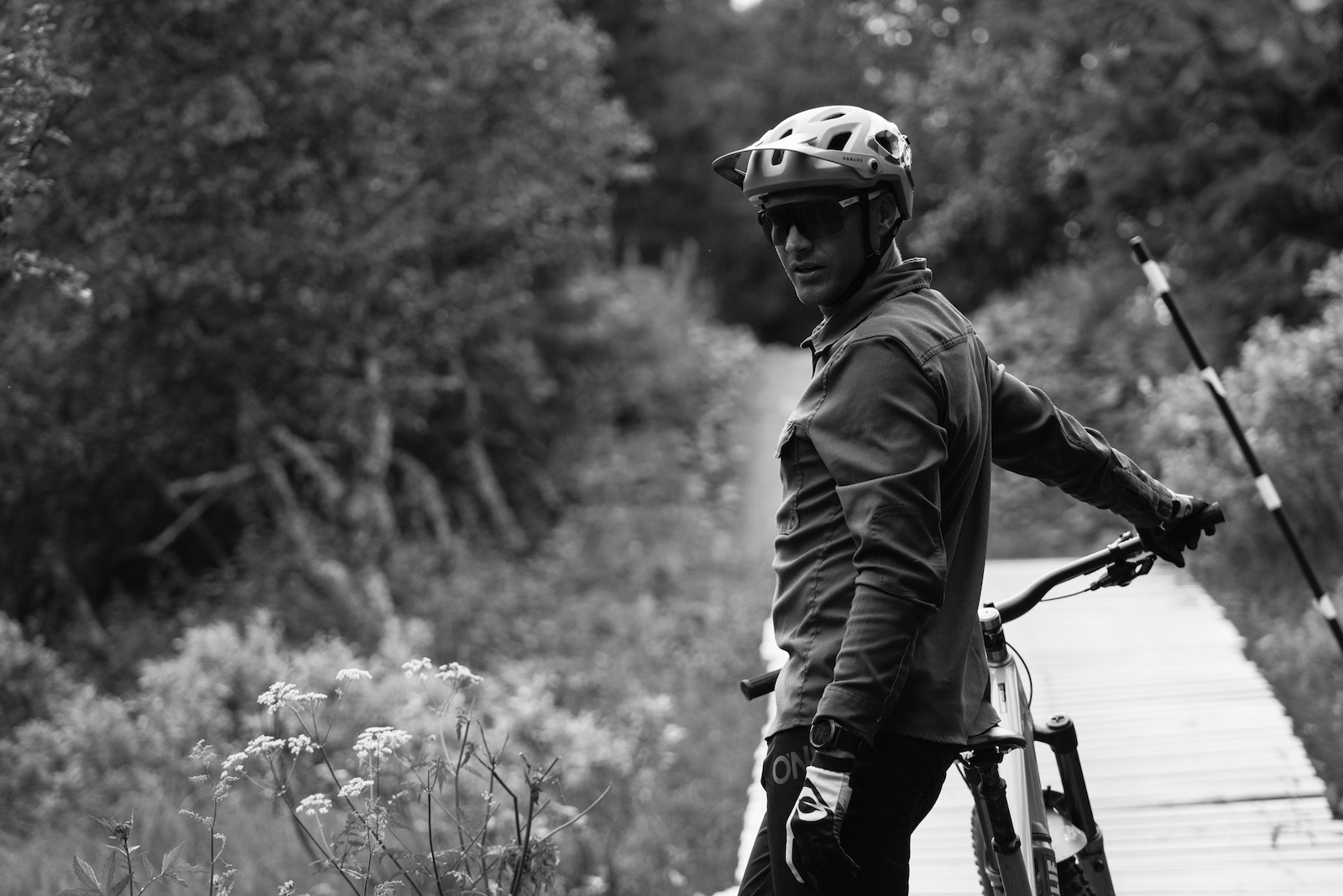 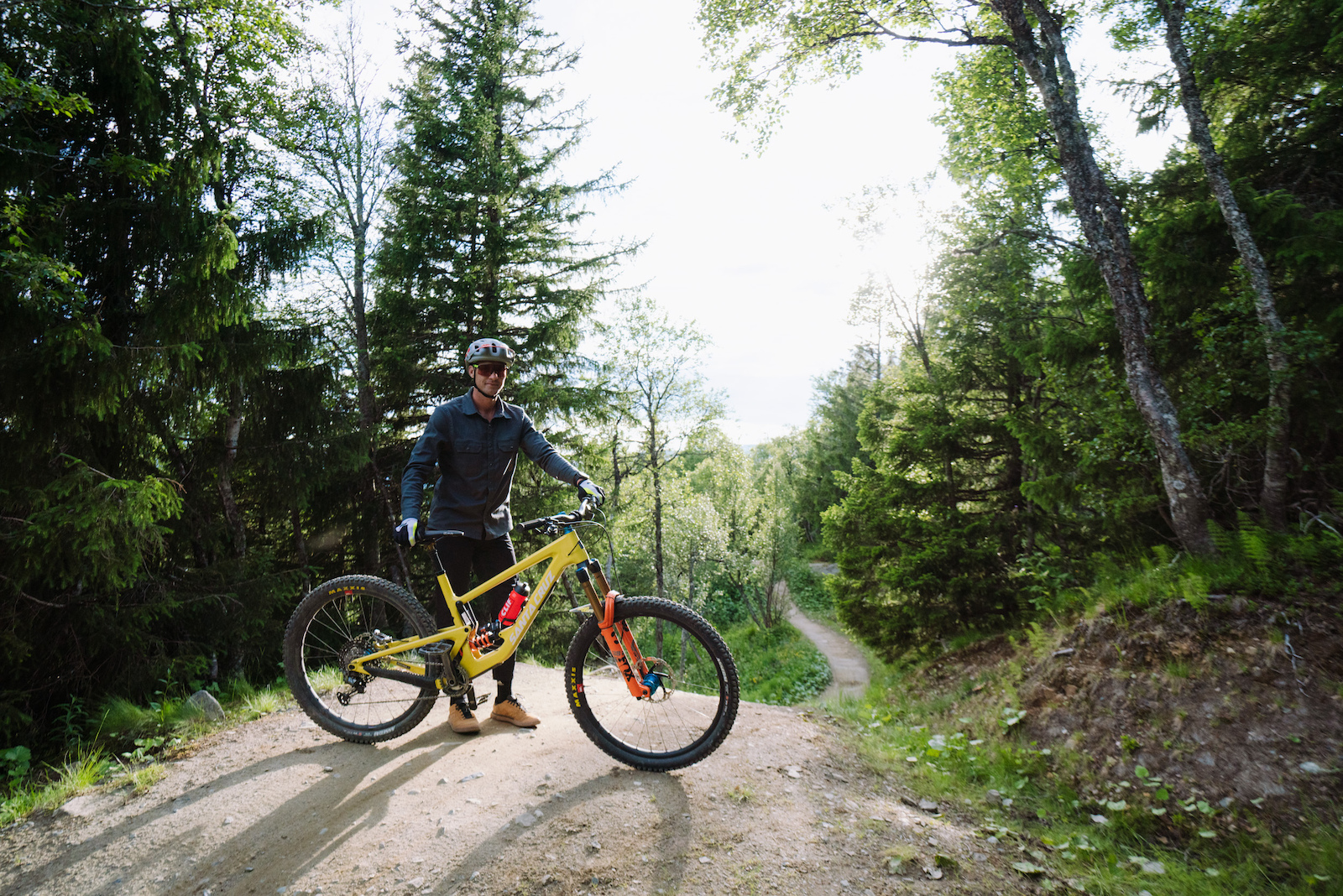 Minnaar in the Swedish golden hour. A month later he would find another kind of gold. 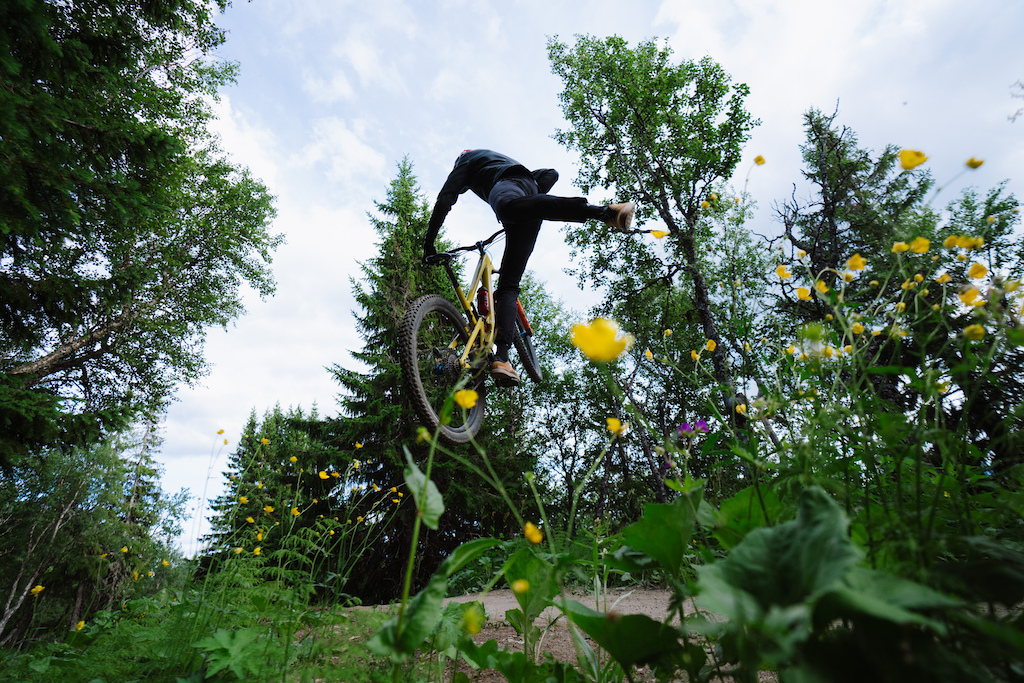 Flat pedals and nac-nacs, not the way we're used to seeing Minnaar. Either way, he crushes it. 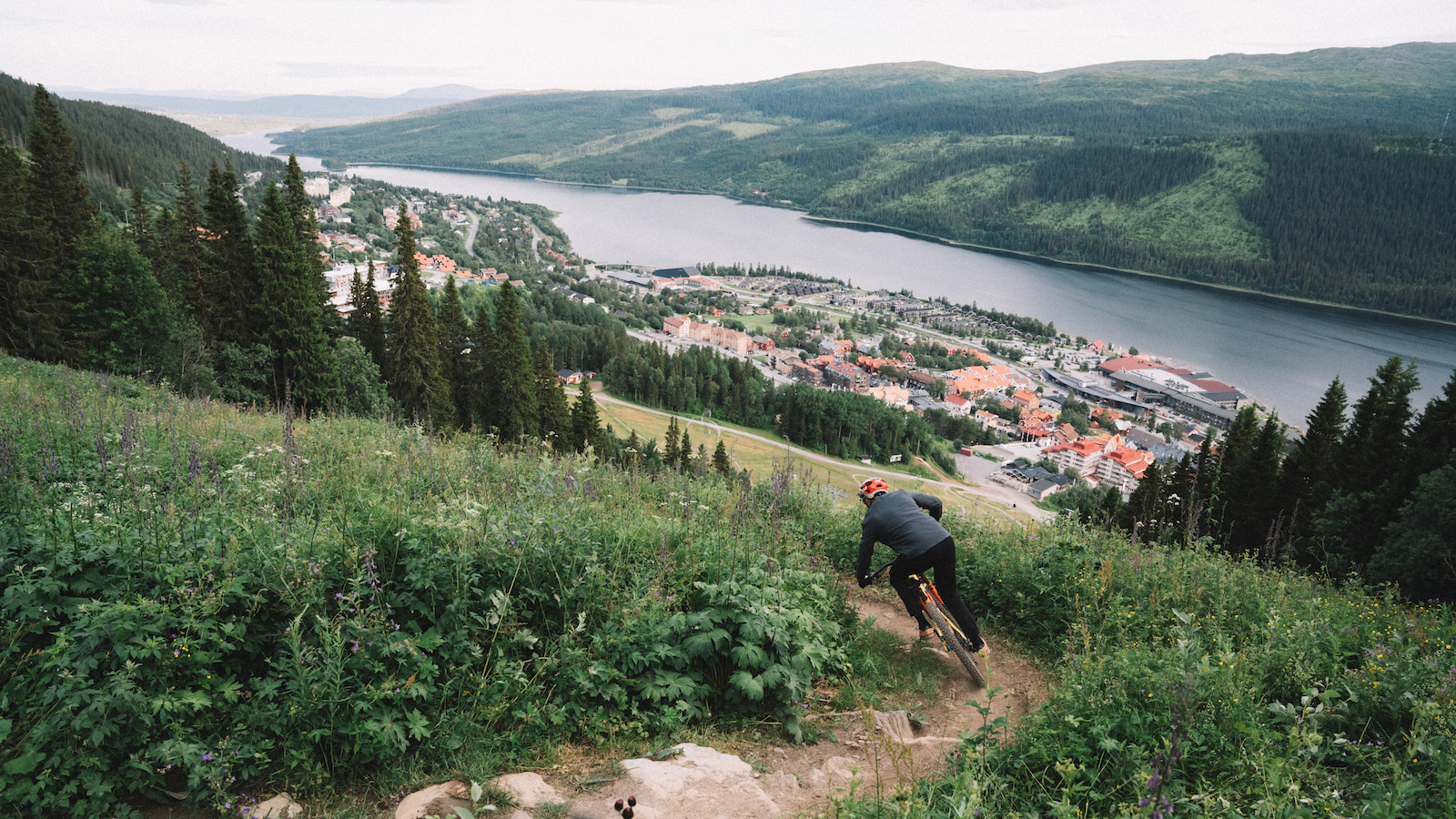 Are's home to 3 800 inhabitants and Scandinavia's biggest concentration of bike trails all over the valley. 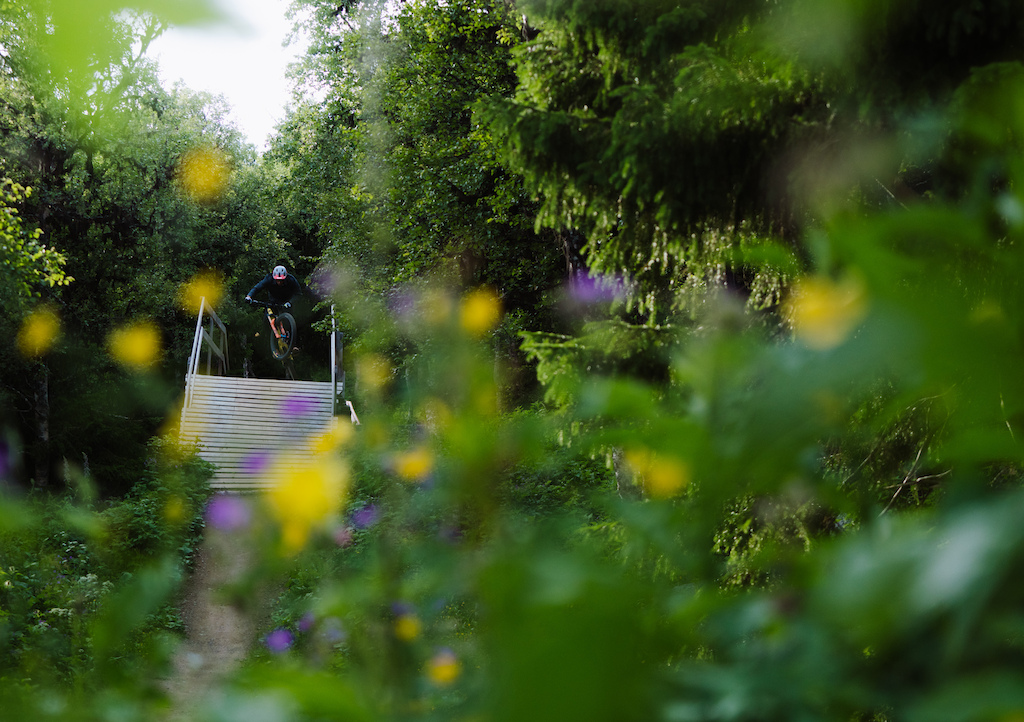 Bridging the gap between racing and freeride in the lush, Swedish forests. 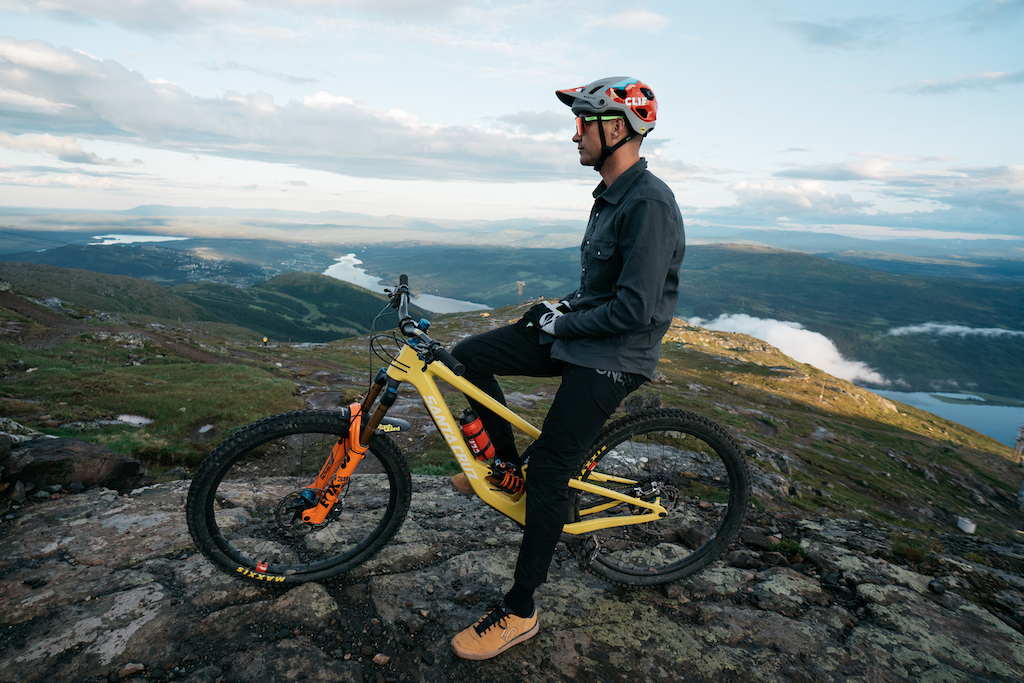 flyin-ryan (Sep 11, 2021 at 22:08)
Hey Greg. Congrats on winning the stripes. I picked you for that win in the fantasy. But after seeing you party your butt off I chose someone else for the next one. (It's all good you deserved it)
I'm going to bet on you again in Snowshoe so can you do me a solid and win for me?
Cool. Cheers buddy.
Btw my girlfriend loves you.
"He's so dreamy"

danhooper5 (Sep 11, 2021 at 12:12)
The man. The legend. My favourite rider of all time. Down to earth, a nice guy and unstoppable! Makes old boys like me feel like we’re still be represented amongst the latest whipper snappers!

siobhananon (Sep 11, 2021 at 13:01)
Greg literally has the best style in the game, looks like he’s riding in slow motion while going fast than anyone else. GOAT

mojavehac (Sep 12, 2021 at 12:27)
Could Minnar get cooler or better looking. After racing I guess he will just take up a modeling career.

guilhas (Sep 13, 2021 at 6:07)
@sickriderch: Trail grades in Åre are atributed by maintenance effort:
No maintenance - Black
Lot's of Maintenance - Green

hardtailhowie (Sep 11, 2021 at 13:01)
I don't understand all the down votes. I'm sure this was his attempt at a GOAT bleat spelled phonetically.

"Greg Minaar Rides at Midnight are in Sweden."

You really need to step up you're grammar game. Sloppy.