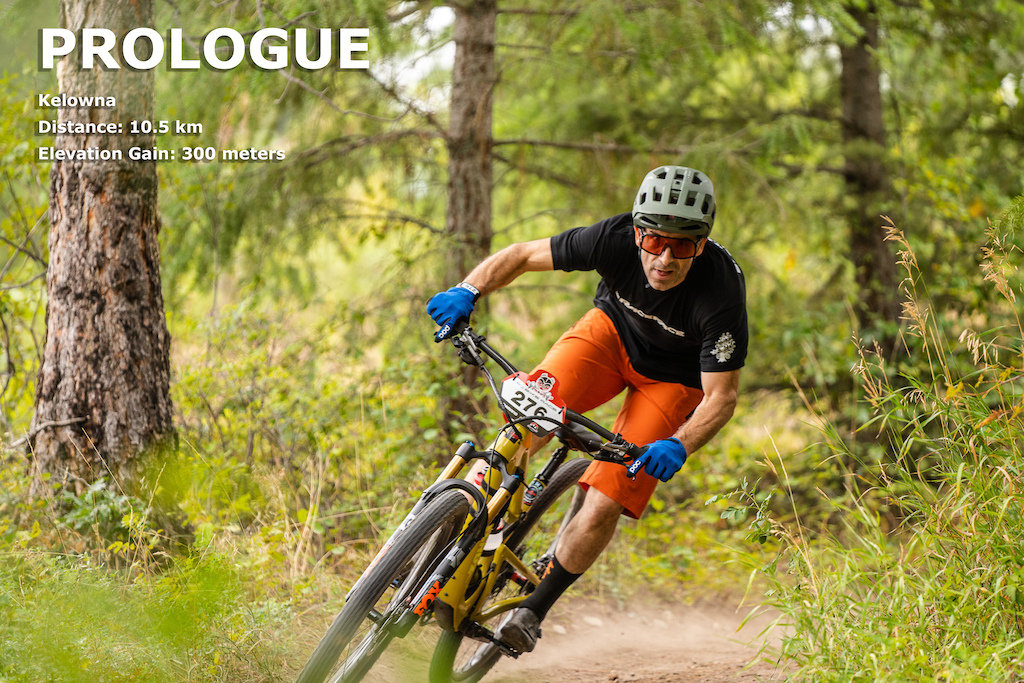 Flying out of the Gates!
BC Bike Race kicked off its second year in the stunning Okanagan with a brand new course winding through the woods above Kelowna’s extensive vineyards. Friday’s prologue offered the Canadian classic stage race its first sample of Kelowna’s particular flavour of dirt in the race’s 16-year history. At just 10km long, with 7km of timed singletrack, Day 1 was a chance to test the legs, sort out equipment and calm the pre-race jitters and find a place in the pack before the first full day of racing. A sneak peak look at what’s to come “The Ultimate Singletrack Experience.” 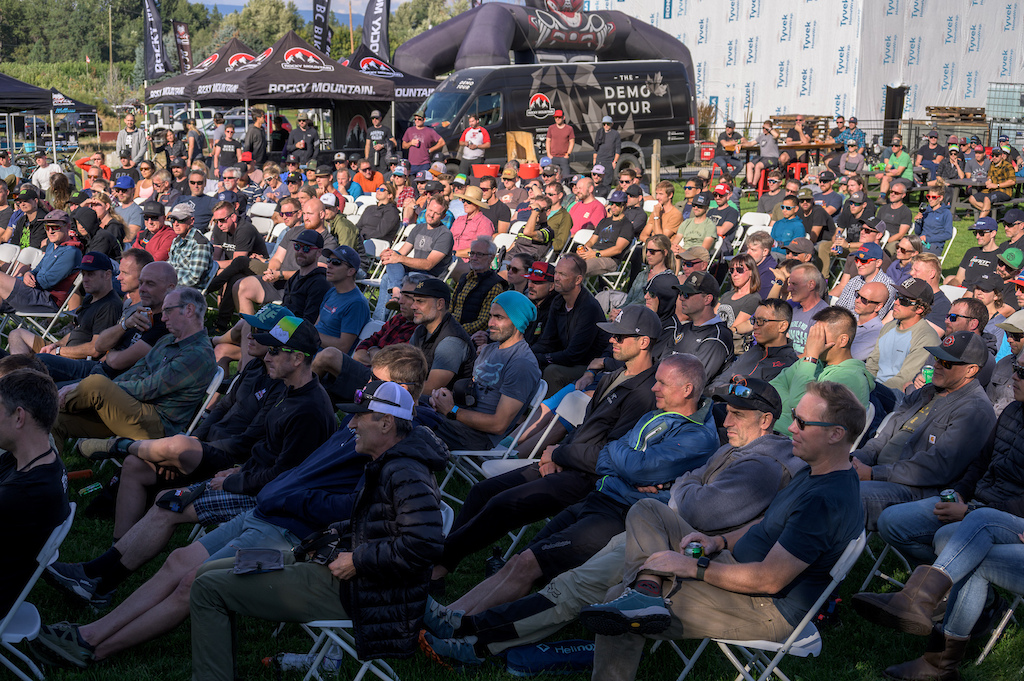 Events are back! So good to see lots of people back at the BC Bike Race. 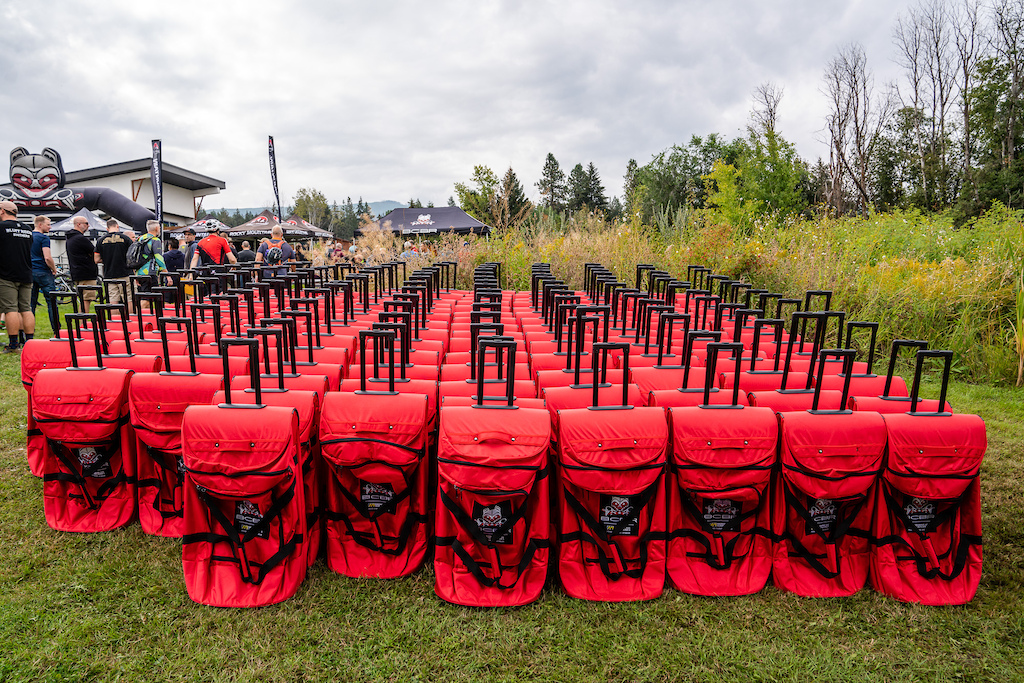 So are the legendary red duffle bags every rider receives during registration.

It was also a chance for riders to get a sense of what they’re in for over the next week of racing. While short, Day 0 offered the BCBR experience in miniature. A punchy singletrack climb greeted racers after the start gate. That led directly to a ripping descent off of a rocky bluff and back into the woods, mixing loose Okanagan corners with roots and high speed flow. After that sample of speed, racers were back under their own power on a fast, rolling stretch of pristine singletrack toward the week’s first finish line. A little speed, a little tech and just hard enough to wake up the climbing legs before tomorrow’s big effort, a full 40.5km of Crawford trails. 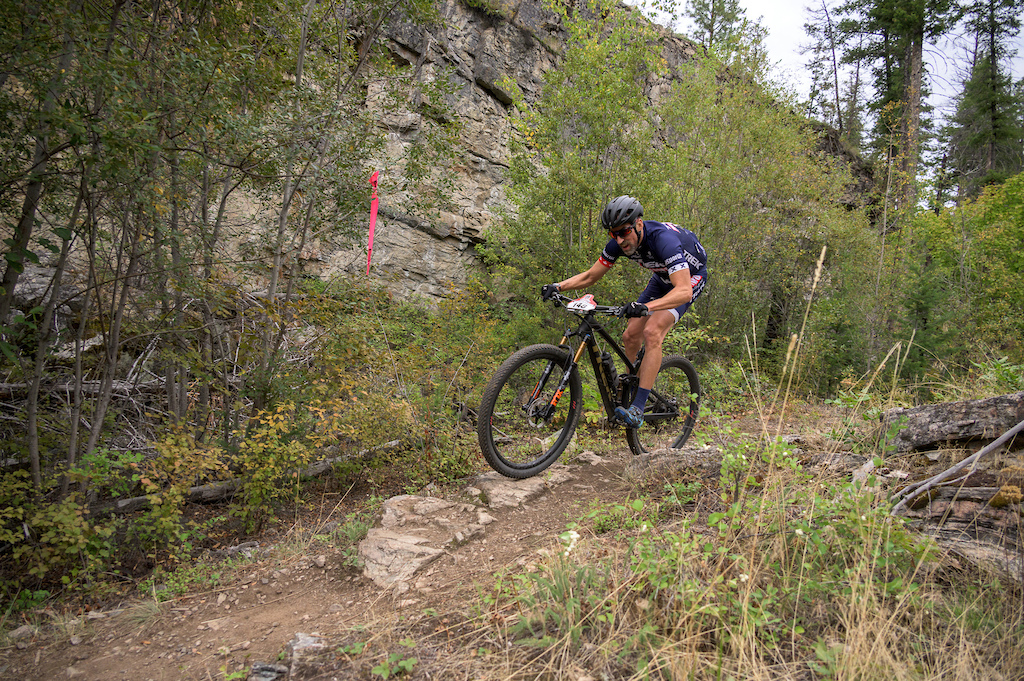 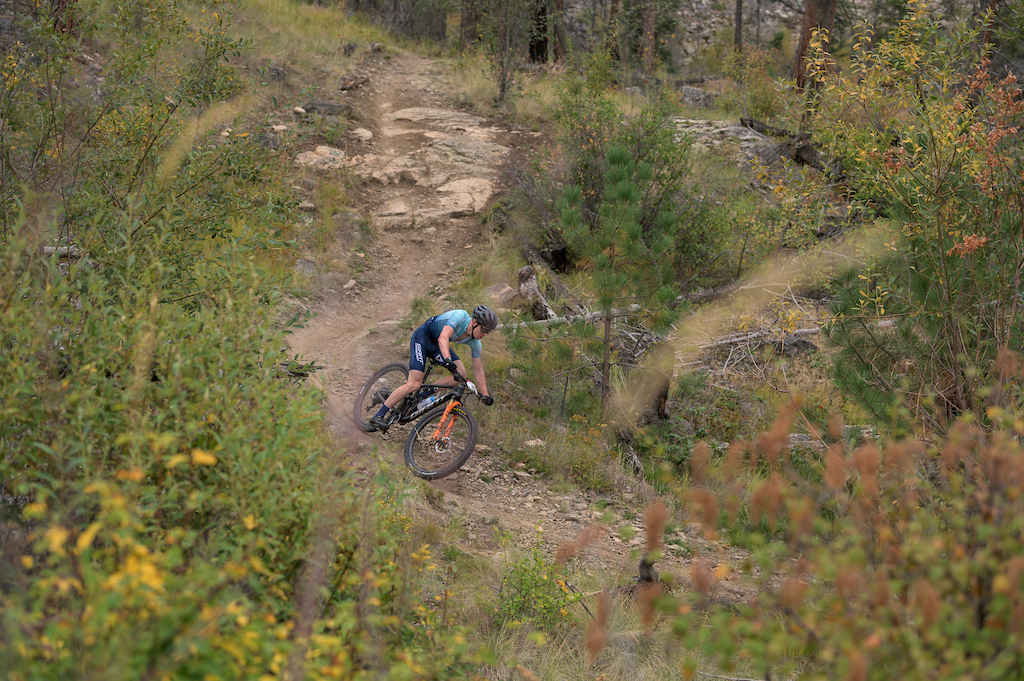 Lots of fast loose corners kept riders on their toes. 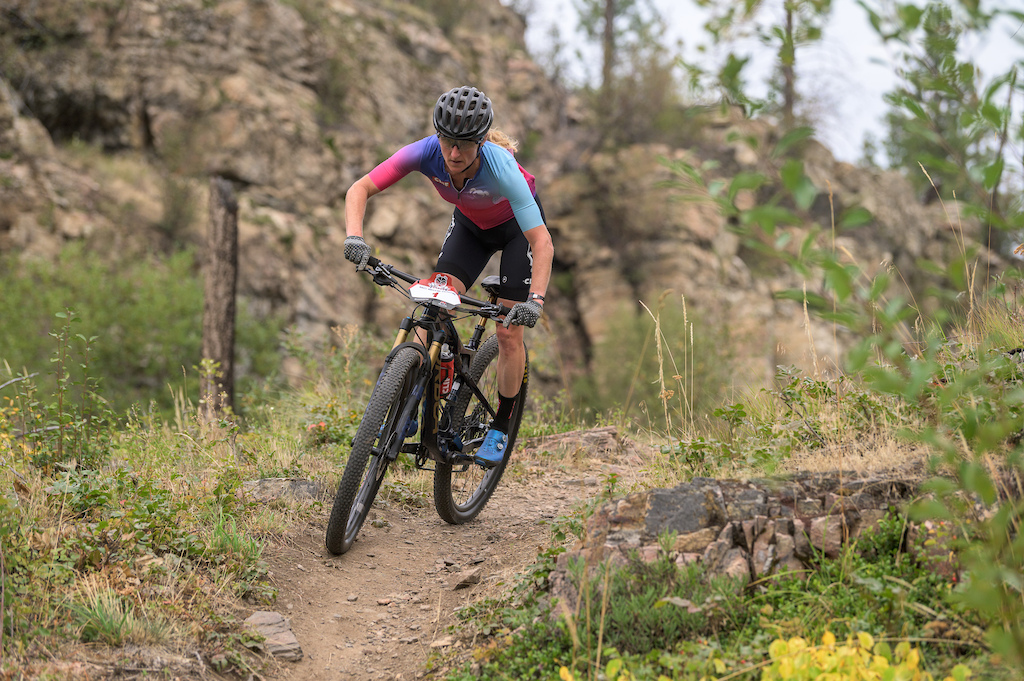 Catharine Pendrel back on the race track. 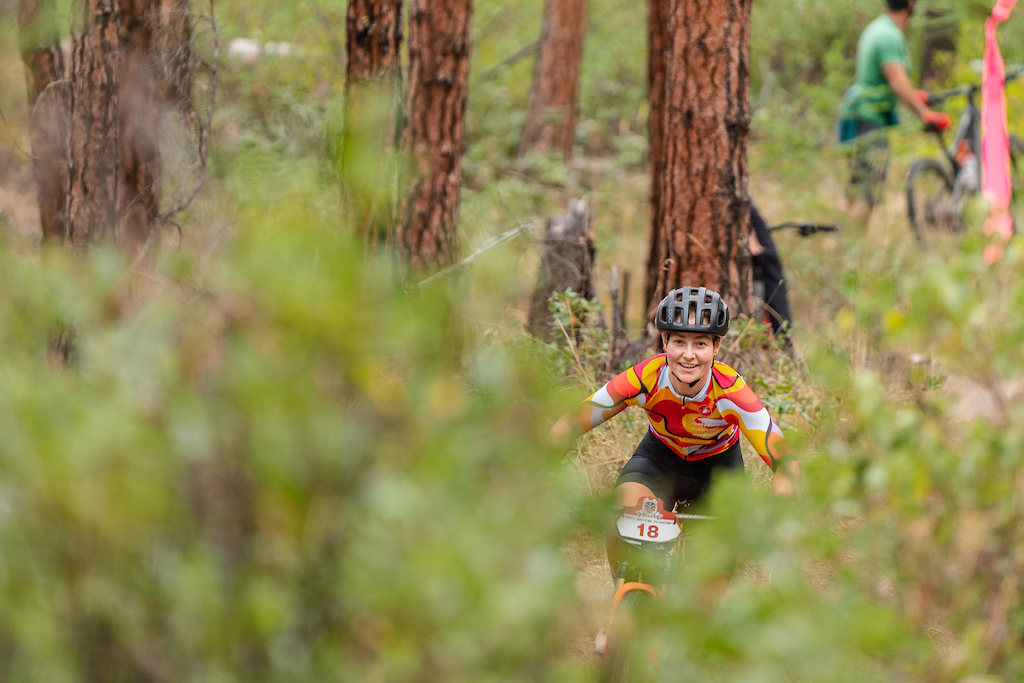 Amity Rockwell with a smile on her face, going into 2 weeks of racing. 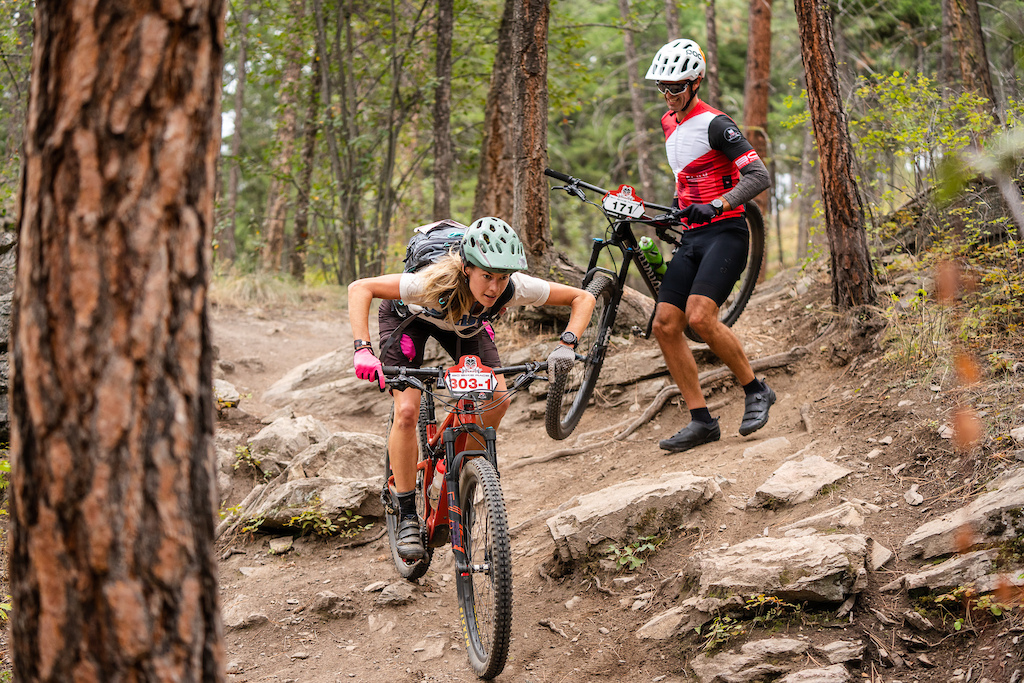 A plethora of optional lines gave racers opportunities to pass.
Testing the legs, and the competition.
This year’s roster includes a mix of returning champs and new challengers. While many riders were happy to get a preview of the Okanagan dirt, for the pros viewing for the win, Friday’s Prologue was game on from the word “Go.” A few seconds can make a big difference, even over a long week of racing, and no one was easing into the week. The advantage was clearly with the riders coming in hot off the World Cup season. Sandra Walter (Liv) and Luke Vrouwenvelder (Giant Factory Off-Road Team) powered to the weeks’ first wins with Vrouwenvelder taking only 17:52 to complete the 7-km timed section. Canadian Olympian Peter Disera gives up only two seconds, finishing second with BCBR veteran and past champ Geoff Kabush 11 seconds off the lead in third place.

On the women’s side, Sandra Walter takes a solid lead over past world (and BCBR) champion Catharine Pendrel. Lauren Cantwell and Chloe Cross leading the chase in third and fourth. It’s a long week of racing, though, and with six full stages of technical B.C. riding remaining, anything can and most likely will happen. 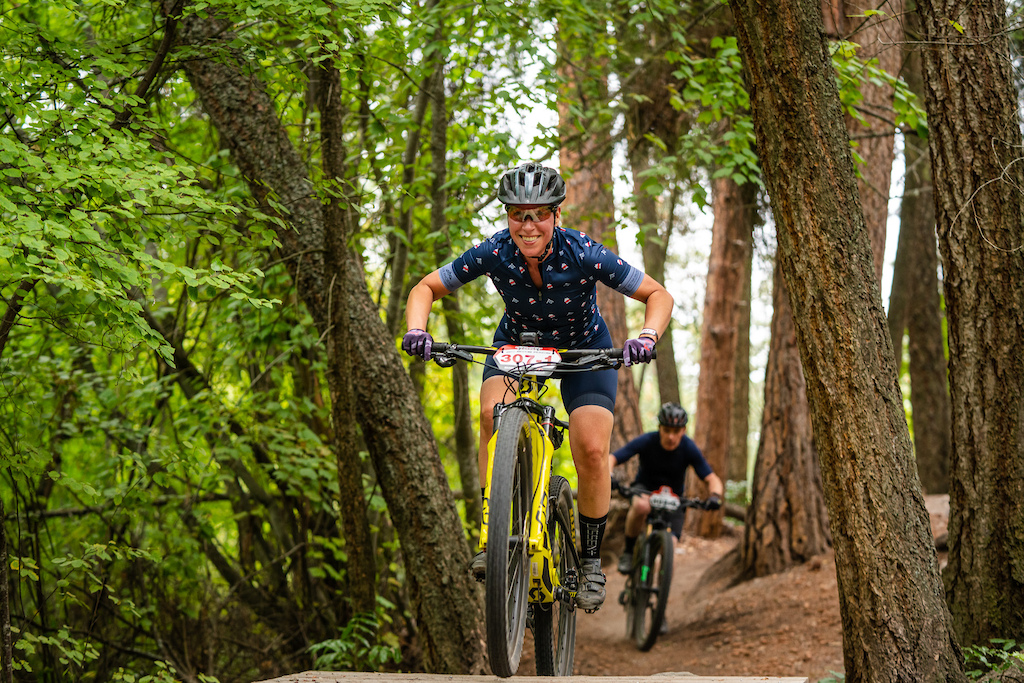 Team of 2, Julie and Rob Phoenix. 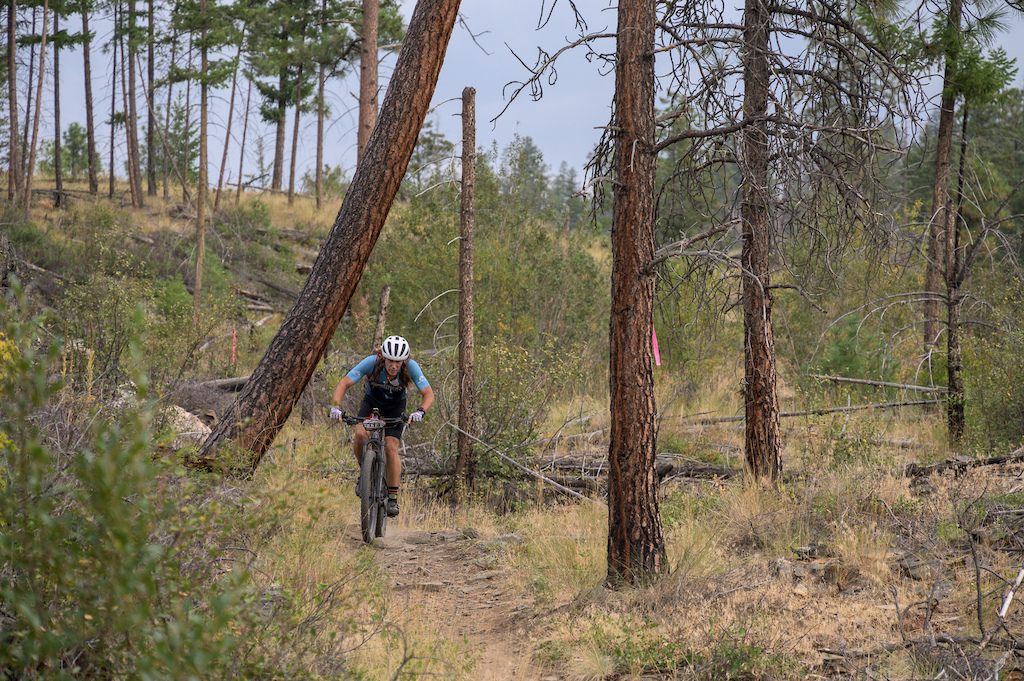 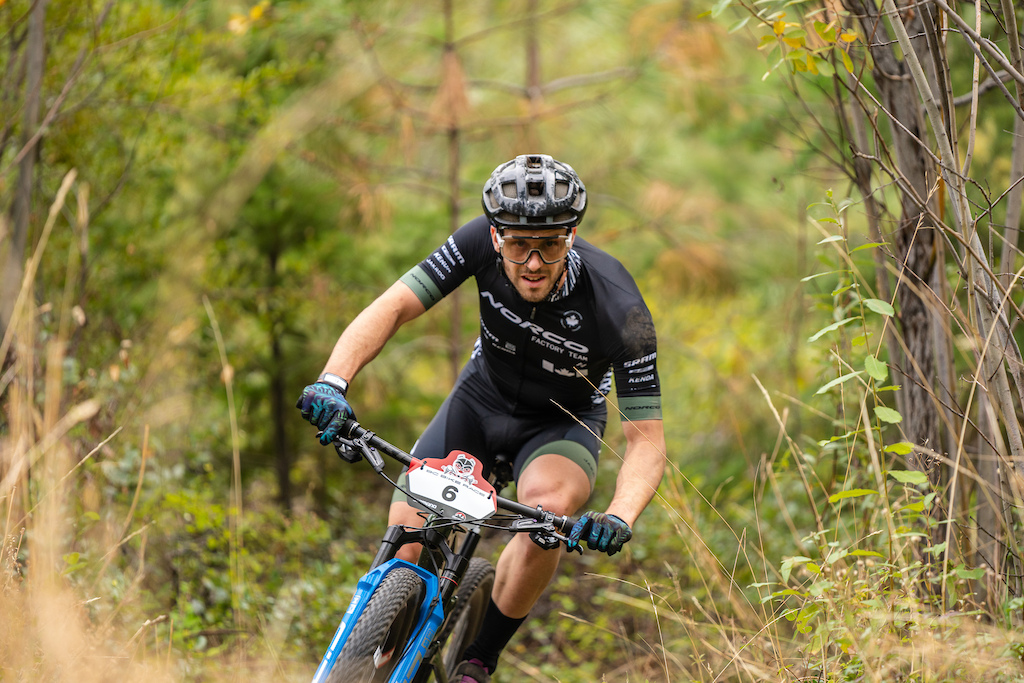 Peter Disera in his element.

With BCBR returning to the Okanagan for a second year, we are honoured and grateful to be riding on the Traditional and unceded territory of the Syilx people of the Okanagan Nation. 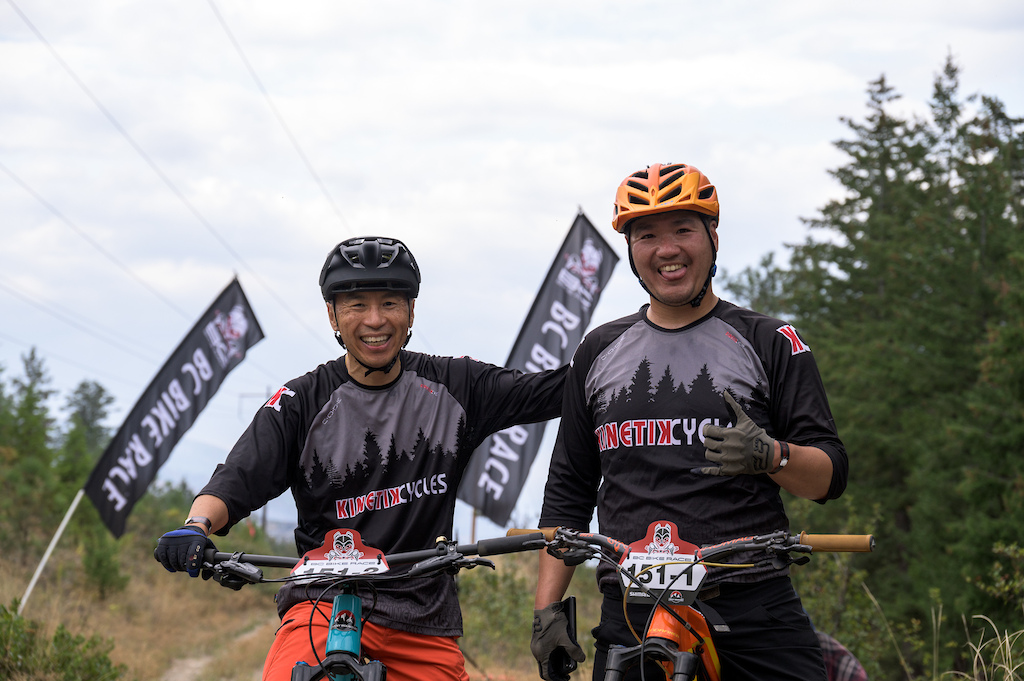 dlford (Sep 17, 2022 at 11:07)
Before the last stage he'll be riding similar sections. I did BCBR in 2017 and at the after party in Whistler met a bunch from South Africa who had also completed the race, most riding near the back each day but taking great pride in improving their placing over the seven stages. They all stated they signed up for a race but soon into the first stage realized they were in for a 7-day crash course at the BC School of Singletrack. If their beaming smiles were any indication they'd all graduated.

canuck-rider (Sep 17, 2022 at 8:38)
Been checking the route out this week. Good mixture of punchy climbs and some rough downs. Large part of the circuit is down one of our DH trails..lol. Which is totally rideable. Okanagan is more fast and flowy then techy, but they'll be clenching in some sections. Had some good rain on Thursday, so the moon dust will be watered down a bit. Still have alot of sharp shale to cut tires and elbows so theyll have to be careful.

kkse (Sep 17, 2022 at 18:26)
So fortunate that the trails got some rain and cooler temps this week. They’ve been super hard, dry and slippery for the past month. Enjoy the trails all you awesome racers!

mikedk (Sep 17, 2022 at 9:21)
Thanks for the heads up to plan my Saturday ride somewhere other than Crawford trails

iammarkstewart (Sep 18, 2022 at 5:05)
I'm not for or against the pricing at this time but if you take the 2022 Early Bird Race Entry – Canadian Resident Pricing – $1,699 CAD and divide that down to per day (7 but including prologue), it's @$243 CAD. That might be a little steep for a single day race but if you also add in that the "BCBR is a curated experience, and the race day course reveal will deliver an incredible experience on each stage of racing" (quoted from the website) that includes logistics, full course marshalling/timing, guaranteed aid stations and name-brand tech support and the coveted red duffel (which they don't mention on the website), I'm not sure how overpriced it is. On the face of it the entry to the Cape Epic seems...epic...but I don't know enough about that race to say if that makes any sense in the circumstance.

If you don't need or want all the fluff then maybe this isn't the race for you, and you can plan a week's holidays around riding the trails yourself with the Garmin.