The Eisbach wave in Munich is probably the most watched and surfed wave in the world. It's literally surfed 24/7 all months of the year. It's located under a road bridge on Prinzregentenstraße, next to a famous art gallery called "Haus der Kunst" on the Southern edge of the Englischer Garten. From the city center, at Marienplatz, it's reached in a 15 min walk via Odeonsplatz and through the Hofgarten. It's not uncommon to see the surfers, carrying boards, walking or cycling through the city on their way to the wave.

The wave has been surfed since the early 70's, but came and went depending on water levels. Since about 10 years ago the local surfers placed planks of wood underneath the water to constantly channel the flow and make a permanent standing wave across the river. In that time the local authorities have also sanctioned using the wave and are no longer threatening to demolish it due to safety concerns. 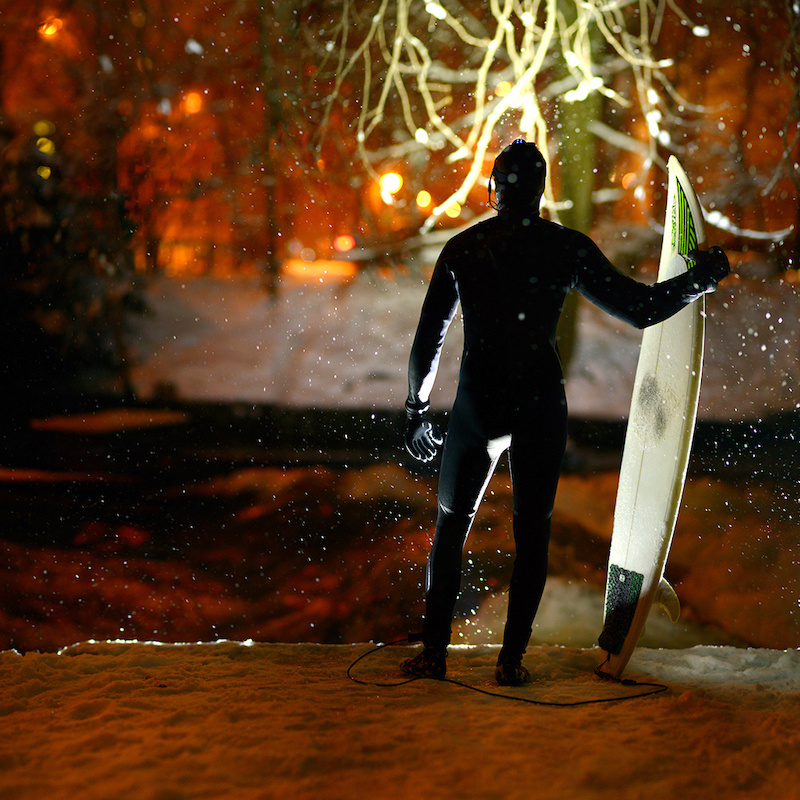 After making a short night time MTB movie with Max Schumann at Bike Park Samerberg at the end of last year, I was super motivated to do a similar style of movie at the surf wave. Fortunately, local surfer Maximilian Schwarzkopf was also motivated and braved a couple of nights of sub zero temperatures to get the filming done. Lupine Lighting Systems supported us with lights to use, both on the bike and in the water. I was surprised about how water proof they actually are and pleased to use them for continuous video lighting at the same time. 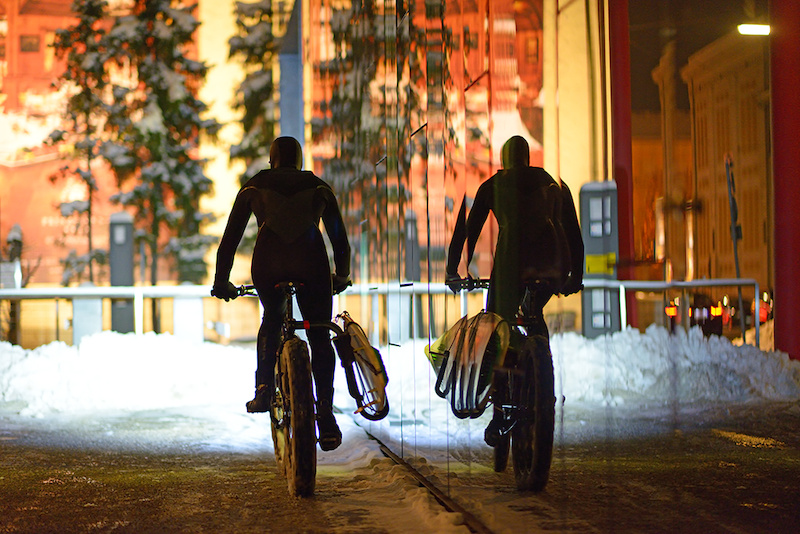 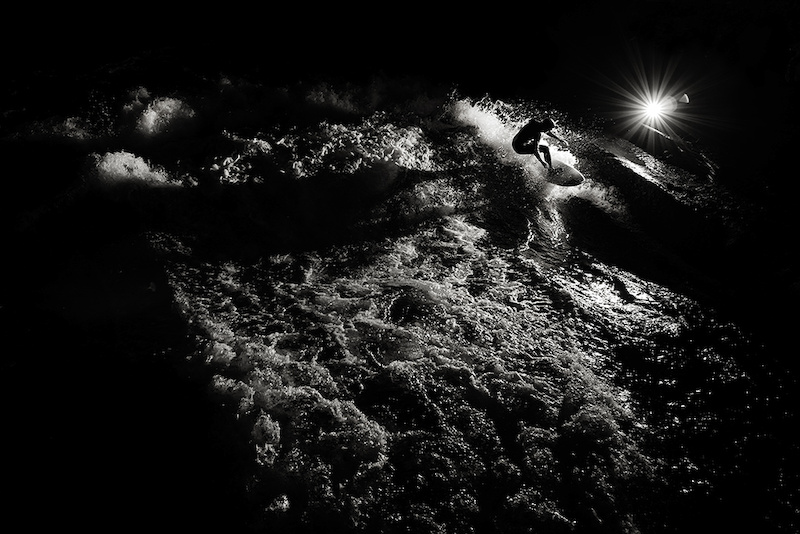 For filming I mainly used the Nikon D800 recording in 1080p/24 and Nikkor lenses 85mm f1.4 and 24mm f1.4. Some of the stills were done just using the Lupines for additional lighting and others, like the B&W image above, with Nikon Speedlights.

I hope you enjoy a glimpse of something a little different and a piece of Munich surfing and riding soul.

robin281 (Mar 26, 2013 at 16:37)
you just wouldnt believe it if someone said it to you... german in a wetsuit goes out on fatbike in city with a wetsuit, surfs a wave on a river under a bridge, in a town, then dries his hair in a public toilet after having a coffee... oh germans, you so crazy!

JevinHoll (Mar 25, 2013 at 21:18)
Nice video. It's cool to see videos of other action sports on Pinkbike and it's awesome that there's surfing in the middle of a city!

angrynipples (Mar 25, 2013 at 22:48)
infinitylist.com that site has a myriad of high quality edits in skating, ski, snow, rock climbing, moto, surf, and mtb

mucklark69 (Mar 26, 2013 at 14:17)
Everytime I'm in Munich I try to get over to that bridge to have a look. Never realised though that they surfed at night. Have to have a look next time. Really mega Video too ! Brought a smile to my face in this never ending grey winter here in Southern Germany.

woodsroller (Mar 26, 2013 at 10:55)
Depends what is downstream. It may go down a drop and then flatten out and lose a lot of speed and power. The high volume of water could also keep you off the rocks and push you right through that section. Hard to tell from this video. I used to spend a lot of time whitewater kayaking on similar waves, surfing them facing upstream. I'd be much more up for this in the daylight and summer temps though. At night in the winter temps scares me more than the volume of water.

pinkrobe (Mar 25, 2013 at 21:20)
Ich habe alles gesehen. They keep threatening to convert the weir on the Bow River to a standing wave. Apparently, I need to learn how to surf.

This mix of surf and fat in the city is pleasant.

turnerrmx (Mar 25, 2013 at 21:39)
I was there a couple of years ago and seen a line up of guys hitting that it was great. It's actually very simple how they make the wave there. Pretty cool

angrynipples (Mar 25, 2013 at 22:44)
i was expecting that to be an extremely bigoted comment prior to watching... but you are absolutely right.

Spearman (Mar 26, 2013 at 0:22)
I surfed it last summer too. And being from Australia it felt really weird being in the middle of the city with a board and actually going for a surf.

Krzymndyd (Mar 25, 2013 at 21:53)
Pretty cool! And its more like the Hawaiians invented the standing wave - Waimea river mouth!

gerhards (Mar 25, 2013 at 23:50)
except for morphine, submachine guns, carabiners, not to mention the bicycle. actually, californians haven't invented much at all.