$599 USD
2017 Specialized Rockhopper Comp 29er Large Hardtail Mountain Bike Selling this purdy 29er hardtail. A few scratches but overall really clean. Tires are pretty skinny but the tread is in great condition. The front SR Suntour XCR air forks leak oil on the stanchions and the remove lockout doesn’t work, which means the air shaft is pretty blown, they could definitely use a full rebuild but for a budget hardtail they work fine enough, and are adjustable using a shock pump. **major info** The bb makes some noises, chain has some rust, and the front shifter/derailleur doesn’t work but I’ve got a brand new 1x crankset and bottom bracket, the exact one Seth’s Bike Hacks used on his budget bike so they’re tried and true. Along with a brand new 9 speed shimano chain, so once I get this all put together everything but the fork will be functioning amazingly. 9 speed Shimano Deore Drivetrain Shimano hydraulic disc brakes SR Suntour XCR airfork (needs rebuild) 29x2.1 Ground Control tires Aluminum large frame Open to offers and can ship 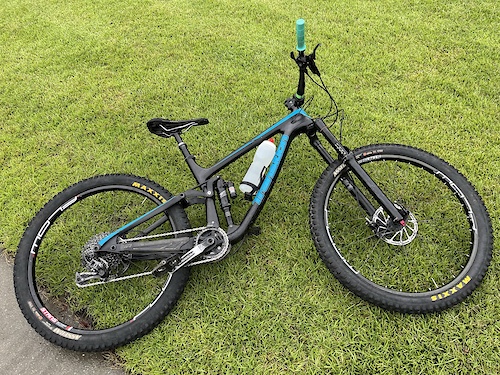 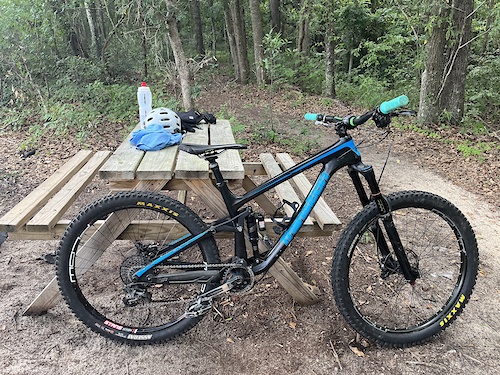 $1999 USD
MAJOR UPDATE: this bike has been an absolute insane blast to ride, just finished my second ever XC race on it (yep, selling for a shorter travel rig) it’s honestly such a beast even on the climbs, I’m able to somewhat keep up with only a few minutes off against seasoned riders on Supercalibers despite my lower skill level. Still, definitely more a descents gobbler. Okay so onto the update: I blew my drivetrain last week in a bad crash so I finally caved and have got a shiny new GX cassette, steel RF chainring and a lower end sram chain in the mail rn. Will be nice and ready by next week, so the value of this thing has shot up despite my price staying the same. Losing some cash on this, especially with PayPal now taxing earned money. Open to trades for slack XC/trail rigs. She’s pretty dang scratched and chipped up, rear linkage still has some play in it, but honestly I’ve never ridden a bike with such plush suspension, and I’ve tried $8k+ Santa Cruz Bronsons and the like. Really gonna be sad to sell but I’m only using 60% of the travel tbh. **can sell for a good price right now with the older parts still installed** havent received the parts yet and if youve got a parts bin and want a discount I can sell as-is right now. what with the current hurricane stuff going on this week would be the best time to sell as race practices might be postponed So I just bought this used a few weeks ago off here, I’m in love with this thing, I previously had strictly ridden 29ers and I’m jumping into the 27.5 crowd and absolutely having a blast. needs a lil love but mostly selling to get something better for XC What I’ve noticed so far: suspension is creaky, could most likely use new pivot bearings. Cassette and chainring are severely worn, so guessing along with the chain all three could use replacing, but I’ve done an awful job of doing the gears (haven’t gotten to them yet lol) they’re not horrible, but have slight slipping under really hard load. Rear wheel has a broken/missing spoke, and the nipple needs replacing. I have both just haven’t bothered taking the tire and rim tape off. Front and rear suspension seems to have a teeny tiny amount of upwards, or “top-out” play. Only noticeable if you lightly pick up the bike. Come with a rear shock rebuild kit and derailleur hanger, this bike so much fun, I’ve truly never enjoyed myself so much. It’s just my inner bike perfectionist is getting frustrated by the tiny things and I’m leaning towards getting something a touch lower end and newer to keep repairs easier and cheaper for me (I’m a high schooler getting along in this hobby- and passion mind you -by fixing up uncared for bikes and selling them to excited riders) so for now I’m gonna keep riding, enjoying, and attempting to solve the problems myself, but in case anyone is interested, this beauty may just be open to someone else. Specs are Fork: Rockshox Lyric RCT3 (some painted over scratches and scuffs, looks great if you don’t look super close) Shock: Rockshox Super Deluxe RCT3 Derailleur: SRAM XO1 11speed Cassette: SRAM GX 11-42 (very worn) Brakes: SRAM Guide RSC (4-piston) Cranks: RaceFace Turbine Bottom Bracket: Chris King Threaded Pedals: Crank Bros Stamp 3 (large, heavily worn but work fine) Dropper Post: PNW Components Bachelor (150mm) with Loam Lever (nice and poppy, used stanchion lube on it so now it’s super smooth but does have a little slowness at the top when popping up) Handlebar: Raceface Sixc (Carbon - 800MM) Wheels: Stans Flow MKIII with Sram NEO Hubs (upgraded freehub- 5 degrees of engagement, feels amazing) Tires: Maxxis Assegai 2.5 (grippy and fresh) I’m open to offers or trades, willing to ship or meet Can upload more photos, just tossing this up to see if there’s any interest and only have one pic ***bottle cage not included, it’s my baby, used on every bike I’ve had **** NOTE: all sales are final, if we meet in person you’ve obviously seen the worth and condition of the bike and I’m not going to refund second thoughts/future/current problems you may run into- it’s a used bike, and I try my very best to state the condition. If you receive it very different as stated let me know as its most definitely damage from shipping, or you didn’t read the description. Sounds harsh but I’ve sold around a dozen used bikes at this point and nearly every buyer has been 100% satisfied EDIT: I’ve replaced the rear spoke along with the rim tape and sealant, the front is original but I plan to replace the sealant soon. Also I’ve added some super satisfying nice pics. Lol. Gears are working better, not perfect and I still plan to replace the cassette/chain/chainring eventually but as of now they’re working but very worn Shipping and PayPal fees are prolly gonna cost me ~$300 but I’d be happy to work out some cost splitting

$599 USD
Hi peoples I’ve just finished completely tearing this bike down to the individual parts, and build it back up good as new. Nearly every worn part was replaced, brand new headset, seat post, chainring, and just about to put a chain on it. I left the bottom bracket as it’s working fine, and if I was going to be riding this thing hard I’d get some wide trail tires and a shorter stem, but for a casual rider it’s ready to hit the trails! Medium frame, recommended to riders 5’6 -5’10, but there’s always some wiggle room so it’s good for almost any rider! I’ve owned an extremely nice carbon full suspension Trek that cost nearly $8k in 2015 and this still feels really good to ride. Very trusty bike with the known for durability frame and mechanical disc brakes that are very user friendly. Fantastic first full suspension. Fork is labeled as 100mm but looks a little more like 120.. I’m not sure. Either way, shorter than it would come stock, but it works. Not sure what the rear is New chain is installed, still tuning the gears, it slips between gears mid cassette right now, derailleur might be slightly bent. Not sure. Still works really well, super clean, and all tuned for a 5’10 160 pound rider. I’ll be out on the trails this weekend giving me it it’s first rebuilt ride if anyone wants to meet and check it out! DM me for questions! UPDATE: UPGRADED TIRES HAVE NOW BEEN INSTALLED