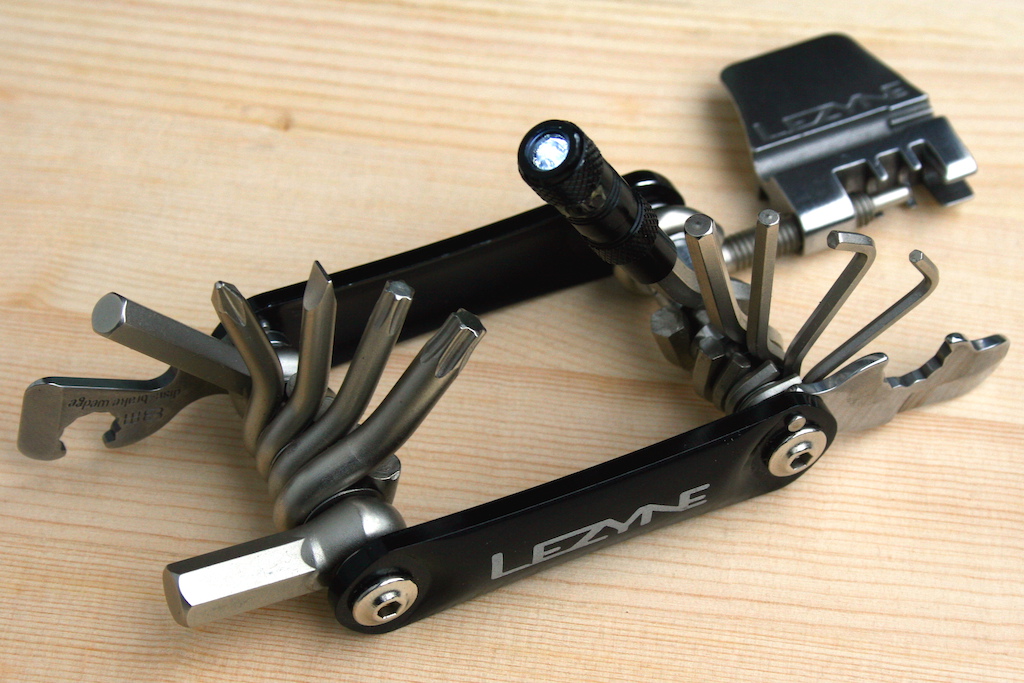 Based in San Luis Obispo, California, Lezyne is well known for designing snazzy looking bike pumps, tools and accessories that have a precise and polished look, and they've also just released three new GPS units and accompanying software. It's the RAP 21 LED multi-tool that's reviewed here, though, with the tool's name giving away its two notable talking points: it includes 21 different tools and an integrated, detachable mini LED light. The RAP 21 LED weighs 178 grams and retails for $34.99 USD. 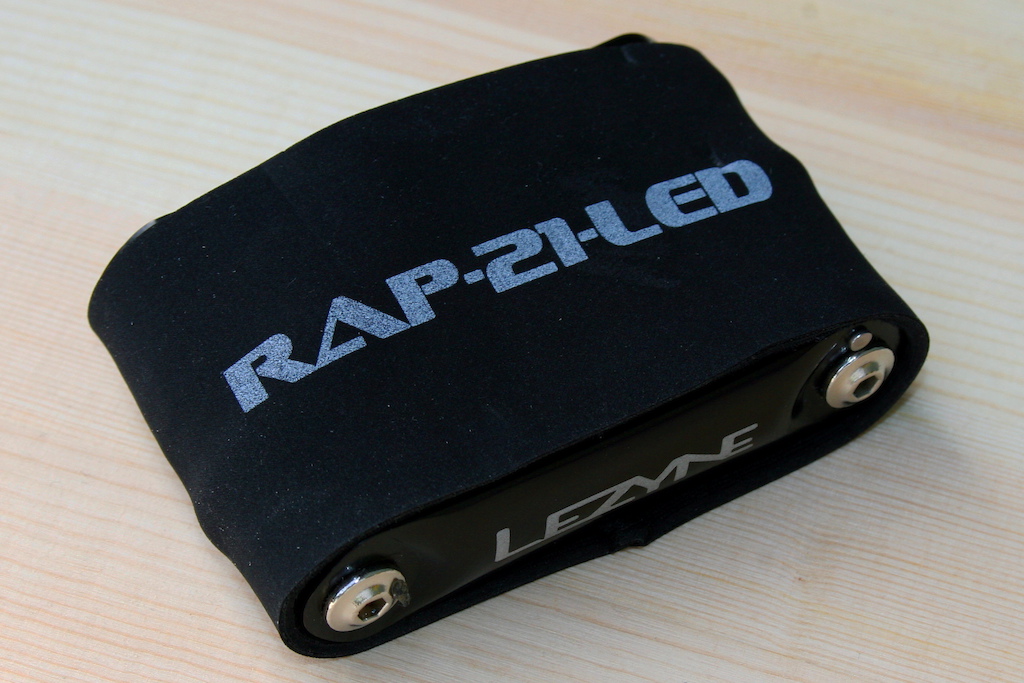 The RAP 21 LED may be the entry level model in Lezyne's multi-tool range, but it still boasts twenty one different tools, including the critical hex key sizes, T25 and T30 torx, and both flat and phillips head screwdrivers. Other tools include a chain breaker, tire lever, spoke wrenches, and both eight and ten millimetre open-end wrenches. It even has a disk brake wedge in case someone squeezes a brake lever when your wheel is out - that's always a pain in the ass to fix on the trail. The LED feature consists of a detachable, miniature one-lumen light that mounts to the end of the five millimetre hex key, and it’s powered by four tiny batteries that should last over a hundred hours.

The body is two CNC'd and anodized aluminium side plates, with the chrome vanadium-plated tool bits all bolted together using their center pivot design. When folded up the tool is a manageable size and fairly flat, while the neoprene cover keeps the bits in place and prevents any sharp edges from tearing the tube that it might be stored beside or ripping your jersey pocket. 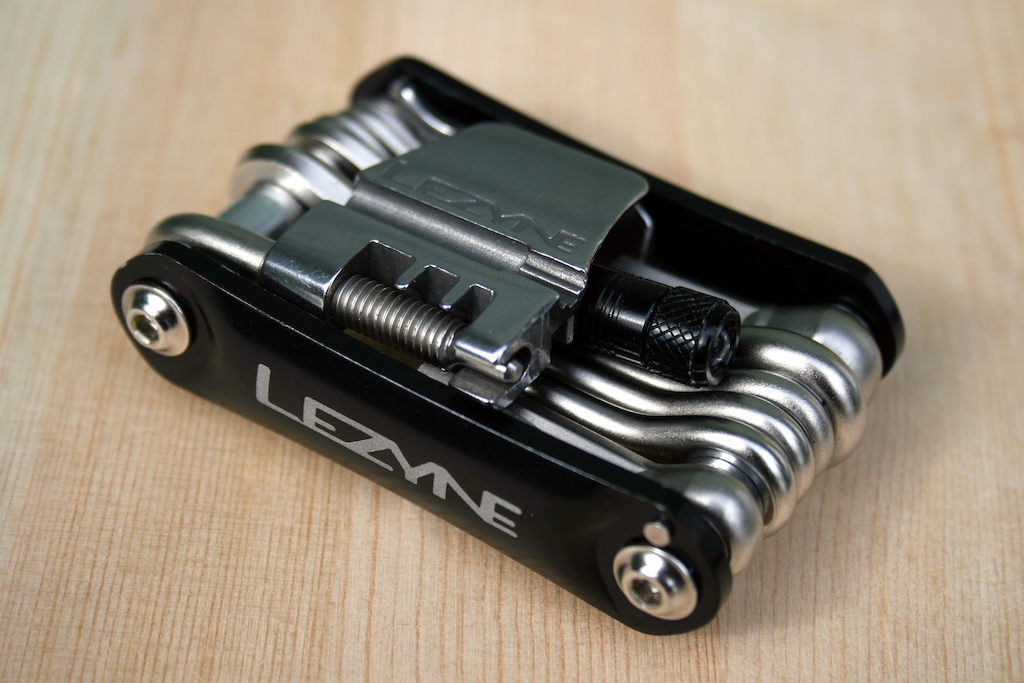 The RAP 21 LED fits nicely in the palm of your hand and weighs around 195 grams on our scale, which is bit more than Lezyne claims. 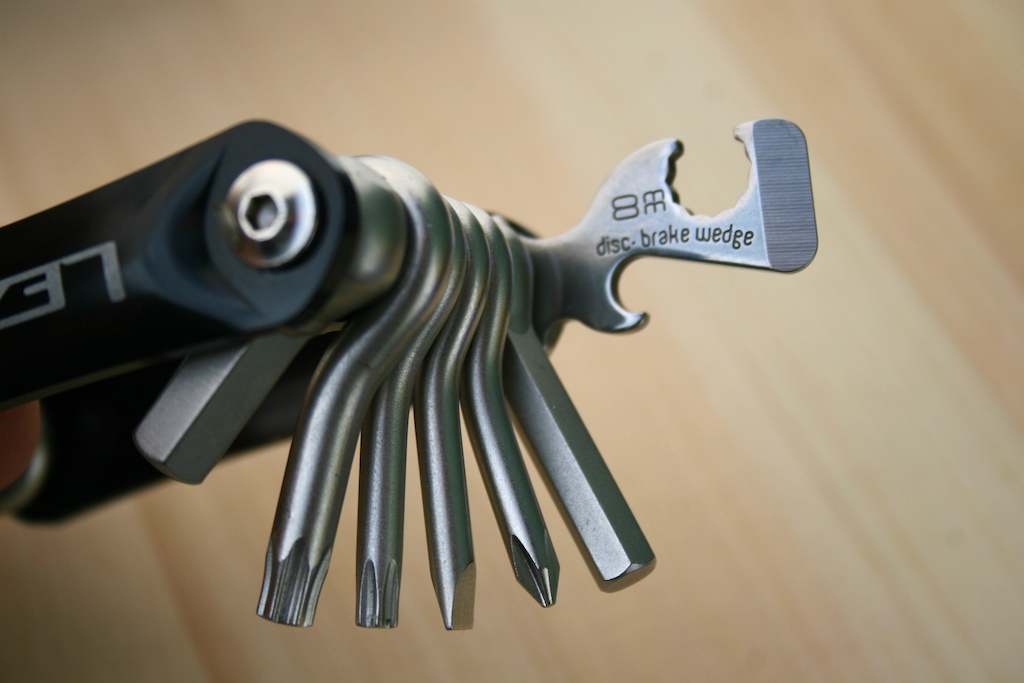 Don't forget to clean the brake wedge before you open your post-ride beer with the bottle opener.

The center pivot design works well to keep the tools from flopping around, but as the packaging says, you do need to check and tighten the side plate bolts every now and then - the bits get floppy when the bolts back off. The thing to remember is that the RAP 21 LED is an on-trail multi-tool, not something that's meant to be used in the shop, so while the one inch long hex keys and drivers are not great for tight spots, they work well for stem, handlebar, lever, and saddle adjustments when you're in the forest. If you a have a loose rotor bolt or need a brake lever micro adjust, you may only a get one quarter turn at a time, but it can get the job done. The stubby eight millimetre hex key and both flat open-end wrenches were a bit awkward for regular use as well, but they'll tighten whatever comes loose.

The chain tool works as you'd expect, and it doesn't feel as clumsy or hokey as some, but it doesn’t have a replaceable pin. The three spoke keys and the brake wedge also work well, with the latter being a godsend if you have that one riding buddy who thinks it's funny to pull your brake lever when the wheel is out of the bike. The stubby tire lever does its job, even if it lacks some leverage, but I'd recommend carrying a set of plastic levers if you might have to pop the tire off of a carbon fiber rim. And what about the LED light? It's actually bright enough to be useful, especially if you do any night riding (it never hurts to have another light), although it's not something most riders are going to be employing that often. It's also worth mentioning that the hardness, finish, and precision fit of all the tool bits was great, which isn't something that can be said about all the multi-tools out there. 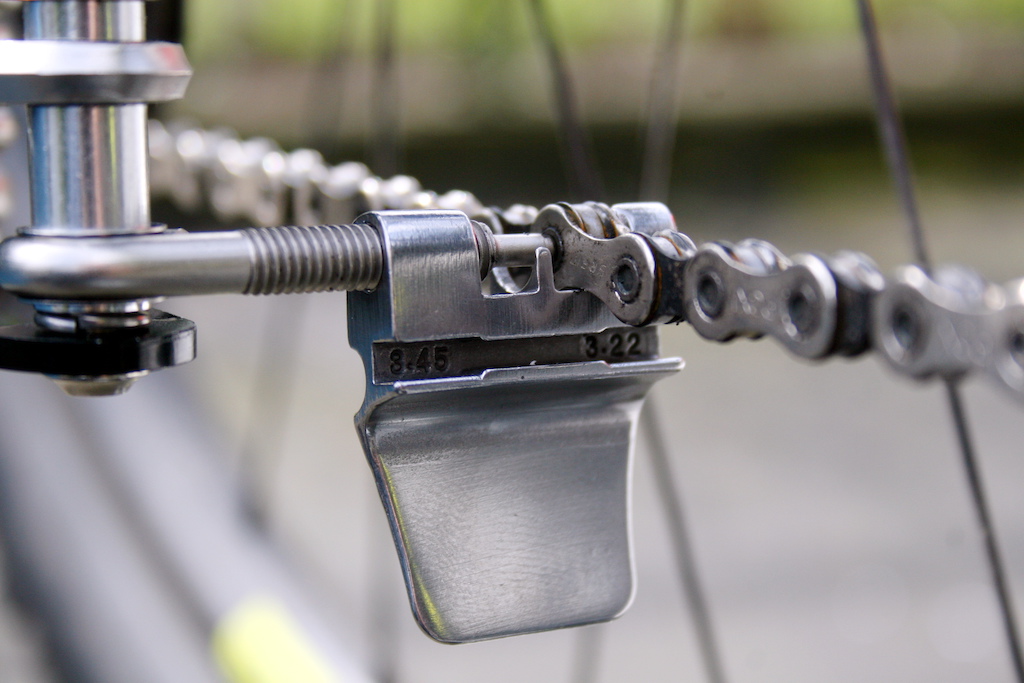 The tool's chain breaker and spoke keys are easy to use. 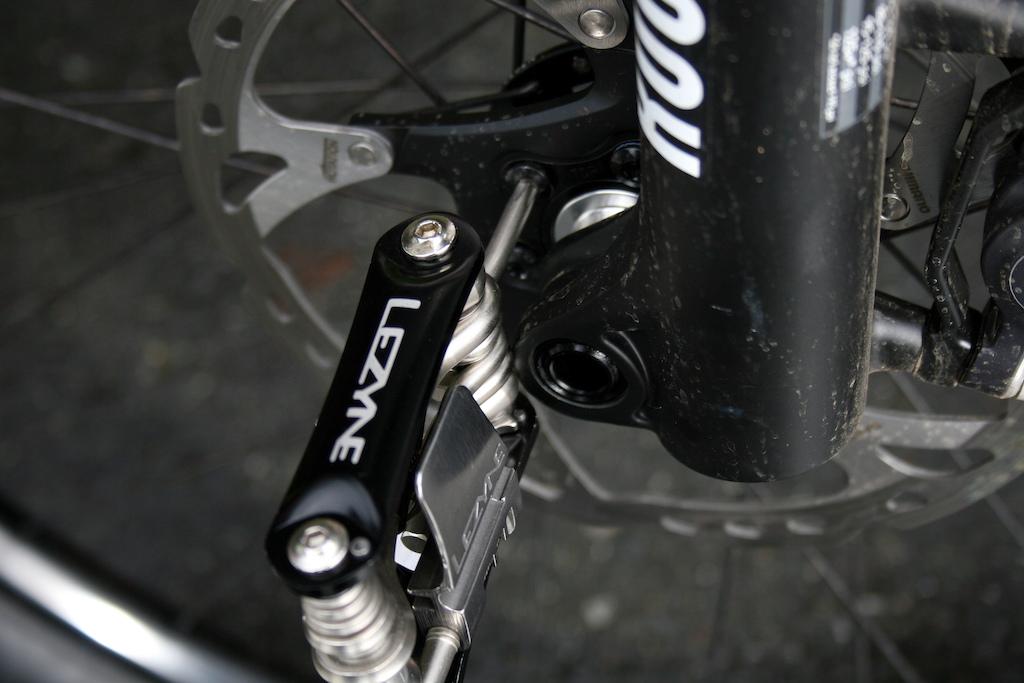 Some bolts were difficult to access and tighten with short-ish tools bits, and you're better off removing the wheel if you need to snug up any rotor bolts while on a ride.

Lezyne Developer: "I know ... Let's take a product that's been done hundreds of times, stick a cheap light to it and see if we can draw in some suckers."

Lezyne CEO: "But wait, don't most people have smart phones with LEDs much more powerful than anything we could put on a tool?"

if its that dark that you cannot see (no lights on your bike, surely if night riding you have lights?)

I'd be more concerned about being able to see clearly enough to ride your bike safely, rather than worrying about tightening a loose bolt on your bike

Narro2 (Apr 28, 2015 at 8:17)
this is definitely not innovative, I have had a tool with a light for the last 3 or 4 years, what Lezine is offering here is a tool of this kind with their quality. I have other Lezine products and their quality is top notch.

SlodownU (Apr 28, 2015 at 9:19)
For $34, this is pretty reasonable. Also, Lezyne is one of the best companies to deal with from a customer service perspective, everyone else (like KS) should maybe take some notes from these guys when it comes to cs.

malathion (Apr 28, 2015 at 11:41)
A fenix EO1 AAA flashlight is short of 3" long, weighs nothing and is pretty much indestructable. Costs $12. Lifetime warranty. You can hold it tucked in your cheek or between your teeth if you need to. Just buy one.

BigBigL (Apr 30, 2015 at 7:10)
I have several Lezyne items including a few multi tools, a tire lever set, a rocking high end light and even a patch kit....all have been great. I have one of their hydration packs and it is absolutely terrible! The bite valve is complete garbage and wears out every year. I tried to order a replacement bite valve from the company directly and even asked where I could pick some replacements if any retailers carried them.....4 years later and I'm still waiting for a reply.

vroomvroompartystarter (Apr 27, 2015 at 21:35)
Multi tools with Beer Bottle openers are the best. That way you can be nice and refreshed when you wait for your bike to get fixed at the local shop.

megatryn (Apr 28, 2015 at 2:20)
I've never met someone who rides with a glass bottle of beer in their backpack or a glass bottle of anything. Cans are usually a bit safer. Although it hasn't stopped me from having a bottleopener on my belt buckle, my multi tool, my stem cap or my front derailleur mount. One can never have too many bottle openers.

suspended-flesh (Apr 28, 2015 at 9:26)
If you need a dedicated beer bottle opener, you should not be drinking bottled beer. Create a fulcrum with any object or carry cans!

mhoshal (Apr 30, 2015 at 9:53)
Well I don't condone drinking and riding anyway but it works well when I wheel into house grab a six pack and clean my bike well I pound back a few

whitebullit (Apr 28, 2015 at 3:17)
love my lezyne multi tool, instead of a flashlight mine has a knife, would be cool if they sold each bit seperate so you could get all the bits you need and none you dont, other than that great product.

oodboo (Apr 28, 2015 at 8:57)
I've got one of these, won it on a facebook comp leading up to Chistmas. It's a decent little multitool and has replaced my ageing topeak alien in my pack. It might be small but it's comfortable to use. However, the light is useless. If you're looking at these get the cheaper version without the LED (RAP 20 I think). I'd rather have a T20 torx instead of the light as that's what my mech hanger uses and I don't have one to carry with me.

Forget the LED light thing, we don't need it. Instead, incorporate one of those red laser pointer things so we can make our dogs chase the red dot thru the forest. Just my two cents.

pahblo (Apr 28, 2015 at 7:38)
I know the Industry inside out and the folks at Lezyne are some of the nicest people in this business, and their pumps and tools are above the rest of the products outhere, they actually care about the quality of their stuff.

Novakki (Apr 30, 2015 at 1:34)
Have had this tool (without led RAP20) for past 3 or something years, it's still the best tool I carry, combined with a Leatherman you can fix pretty much everything, other than inflate your tires/shocks. All the bits still look like new, even tho they've seen years of usage and occasional abuse. Would recommend this particular Lezyne for anyone!

onemanarmy (Apr 28, 2015 at 13:17)
Can't say I'm impressed to be honest. That light is absolutely pointless. 1 lumen? Really? WTF is that thing for. Takes up space that could have been used for something more functional.

If you're going to stress pocket ease as a function then why not recess those bolts in to the frame instead of tapering the frame and just having them sit on top?

VeloDude71 (Jul 27, 2015 at 13:13)
Had Lezyne tools in my shop, stopped selling them 3 months ago. they were rusting. Despite the price and "image" of Lezyne, they are in all actuality a Taiwan produced brand like the rest. Over priced and horrible customer service and sales support. Disappointed

flipoffthemonkeys (Apr 28, 2015 at 5:42)
i hope they apply for a patent before someone steals their innovative idea.

maxyedor (Apr 28, 2015 at 7:29)
If I'm not mistaken, the light slips on to one of the allen keys, so you get a light and more allen keys sizes.
Below threshold threads are hidden

shaowin (Apr 27, 2015 at 21:10)
I you know your in deep when you have a brand new bike and your sitting on pb reading bike tool reviews. I got a new Norco sight BTW