Mar 18, 2009 at 14:31
by Danice Uyesugi
Tweet
I’ve recently arrived home from Australia – a trip that I embarked on a month ago to train, ride, and visit some friends. It was a great month and, as expected, went by way too fast!

One of the highlights of the trip was definitely the day myself and a few friends went exploring on our bikes! 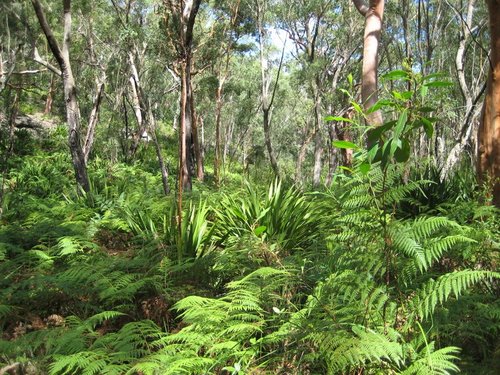 It was a beautiful sunny Friday morning. Matty, the instigator for this expedition, picked me up and we made our way to Wyse’s place where he and Chewy had been ever so patiently waiting for the past 50 minutes exactly. (Ok, so we were a little late.) We threw our stuff in the back of the car, bolted the rack on the back, loaded up the bikes, and were off to discover new exciting trails! The guys had heard about this place but had never been, so it was as new to them as it was to me; apparently hidden in the woods somewhere there was a playground of intertwining trails with natural and man-made gaps, drops, berms, and North Shore style woodwork. With the downhill riding around Sydney being fairly limited and no real organized trail building/maintenance organizations in place, finding a smorgasbord of well built trails such as this would be gold for DH riders. We arrived in good time, put on our armor and full-face helmets and ventured down the trail in what we hoped was the right direction.

The first lap was, well, a lap. We pedaled, pushed up some hills, pedaled some more, and after about 30 minutes we were very hot and right back where we started. That would’ve been a fun little loop if we were looking for a cross-country or all-mountain ride, but we were expecting bigger and stuntier so it was rather anti-climactic. I have to say here that as grateful as I was for the borrowed bike I was riding (thanks Adam!), a large (I ride usually ride smalls) and very heavy Giant Faith with stiff forks and a 500lb spring on the rear shock was a bit much for me. I felt like I was riding a 50lb 2-3” travel bike. I love riding bikes but on that lap I have to say I wasn’t really feeling it, and the thought of hours of this kind of riding was not a pleasant one. Thankfully we decided to stop at the car to hydrate, lighten up the armor, change to XC helmets and try again. 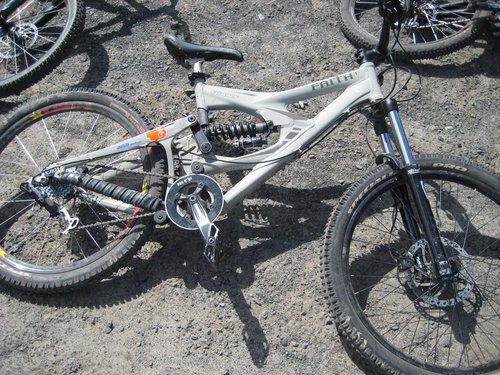 Take two: we took a different turn at one of the forks in the trail, and before too long we noticed a bermy trail off to the left, and then a drop up the hill on the left, some more tight windy trails and whoops on the right… jackpot! We were in a tiny little valley surrounded on all sides by extremely well built intertwining trails and stunts. It was like Christmas! And Wyse was the 2 year old on Christmas morning; all you could hear was him hooting and hollering about whatever he was finding as he made his way up one of the hills. We all found our own way to the top, and from then on it was just a question of which way down? 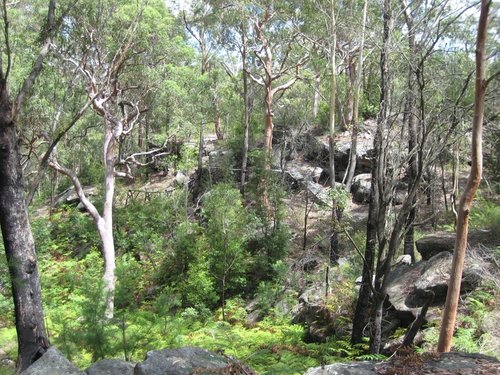 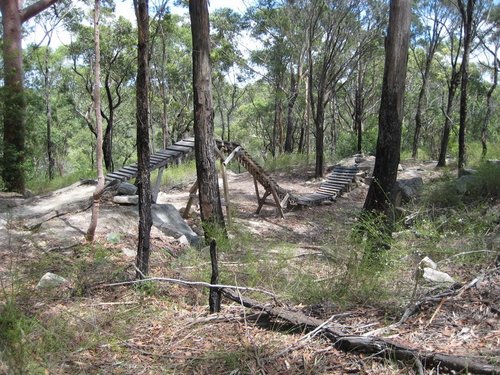 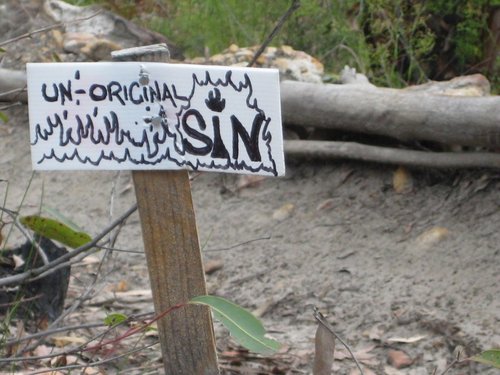 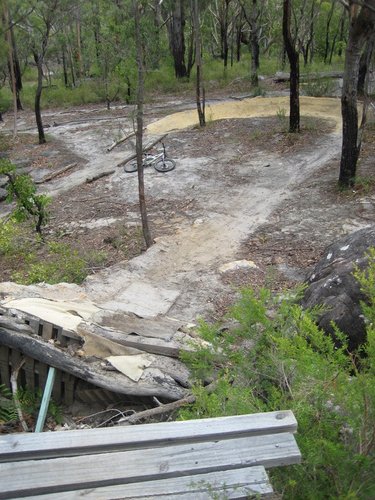 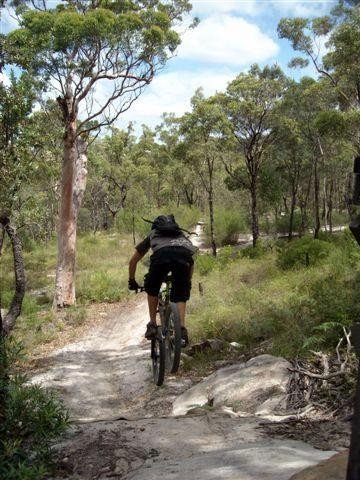 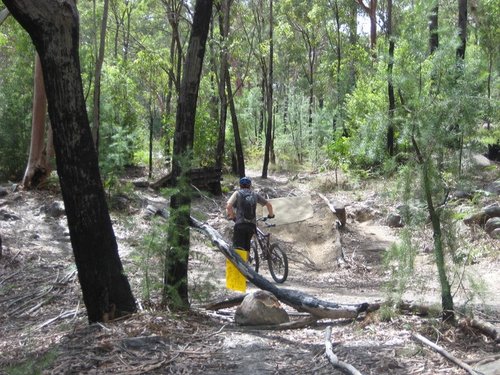 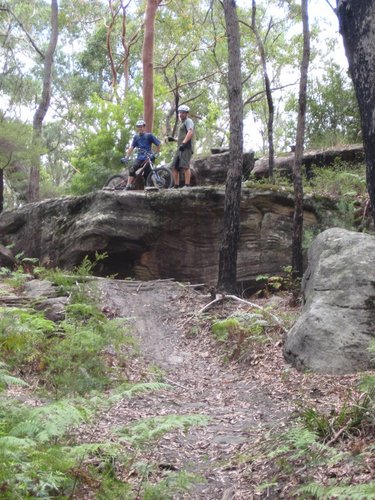 It reminded me of a very natural, Australian style version of Whistler’s Boneyard. And just as happens in Whistler, the ride wasn’t complete without some bike carnage. Wyse got a little too excited going off one of the drops, completely overshot the tranny and landed flat. There was a huge cracking sound. Wyse may have sounded like a 2 year old, but he is built more like a lumberjack: solidly. A very bent seat post and broken rear shock ended his riding for the day. 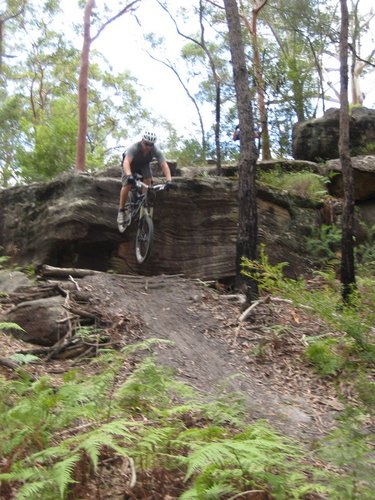 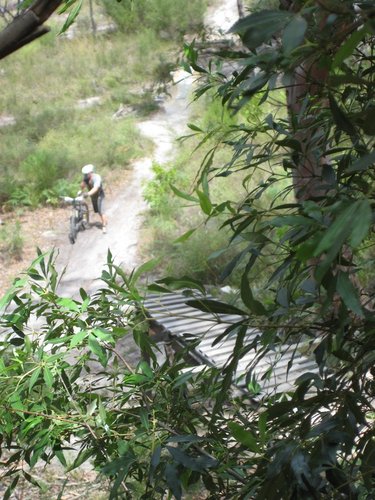 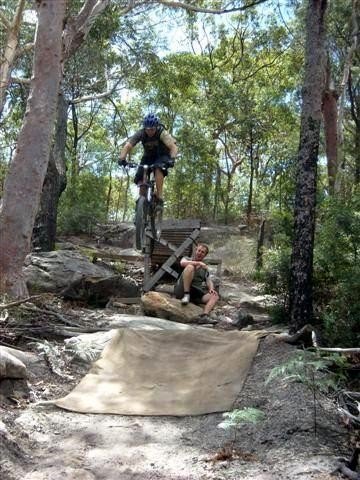 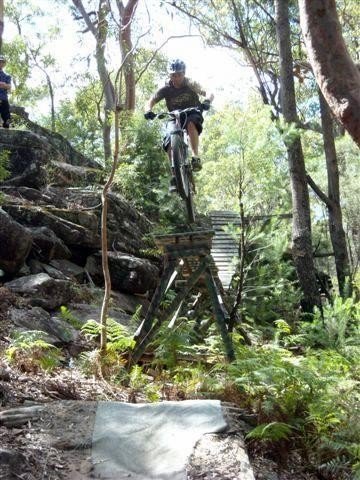 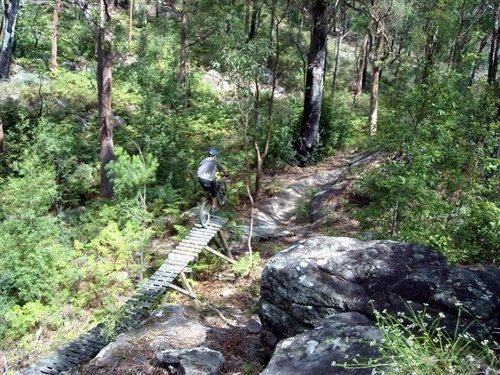 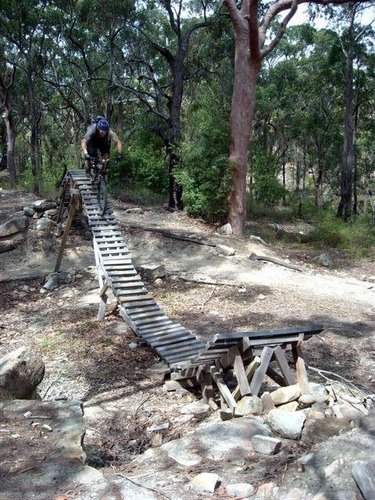 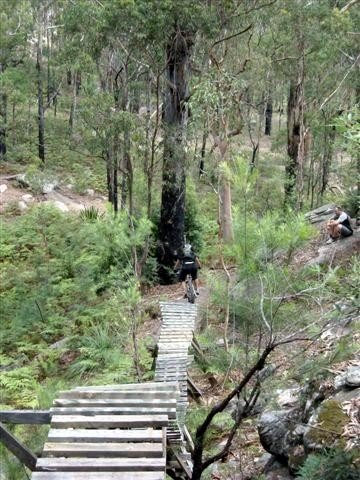 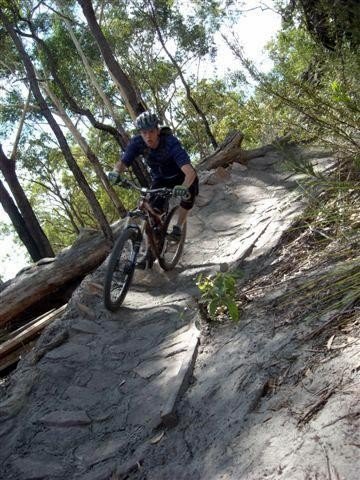 Disappointed but still as animated as ever about our find he continued to bounce from one spot to the next, excitedly telling the rest of us that we should do this drop or that roller coaster if only because he couldn’t. We gave him the camera and spent the next couple of hours playing happily! Chewy and I hit up most of what we could find – he was going in for knee surgery anyways the following Thursday and wanted to pack in as much riding as he could before then, and I was actually starting to get a feel for the giant Giant. Matty was keeping things a little closer to the ground and was railing the berms like nobody’s business. 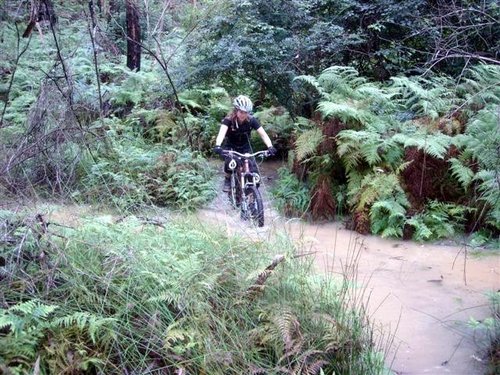 After a few hours we were all feeling pretty tired and hungry, so we made our way back to the car and then to the first McD’s we happened across. Yet another great day of riding bikes! I think we were all glowing when we left; I’m pretty sure we were just really happy but the word ‘nuclear’ does make you wonder... 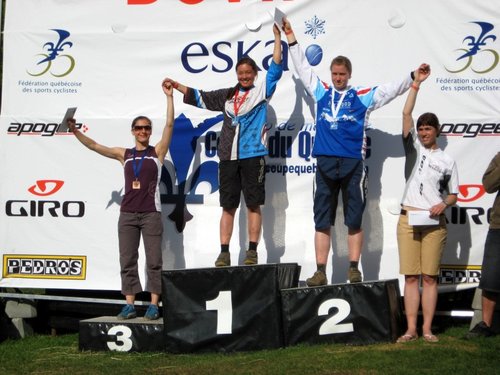 EDITOR'S NOTE: Danice is a World Cup DH racer. See her on the circuit this season.

iguanabartola (Mar 21, 2009 at 6:55)
And the big "secret" has been posted into the world wide web! Those trails are great but the locals wanted to keep them as secret (not legal trails) as possible. The area is a bit far from where I live and every time I visit I get asked(in a very suspicious tone): "how did you find this place"? Those guys have done a great job and hopefully we all riders (who can find the spot)will look after it!

quickfinger (Mar 21, 2009 at 8:22)
I hope for the trails sake everyone does take care of it. Place looks mint though id love to ride there.

shiredhr (Mar 21, 2009 at 19:51)
dont you wish i would tell you where this is.... these are some of the sickest freeride trails in southern sydney i have as yet ridden! it took me a few days to balls up to some of those drops as pictured, they are much bigger than they look in the pics haha and ive yet to hit the big lot of north shore at the bottom!

supremematty (Mar 23, 2009 at 17:35)
hey guys, i showed Danice where the trail was, just have to say one thing while i understand not wanting the trails location to be revealed even though there pics of the place all through AMB, i think rather than complaining to Danice we need to start complaining to local, state and federal govt, showed that we are an organised group and that mountain biking has a big following if you have the time post a comment on pinkbike you have the time to write to your local represenative. cheers matty

kiwibob (Mar 22, 2009 at 13:57)
Wow. Nice article. How incredibly ignorant of you to post almost the exact trail location on the web. As your Australian host should have explained to you, Australia is vastly different from Canada in that our government system doesn't get behind our mountain biking at all. In fact, they make it quite difficult for us to get and keep legal trails. We are not allowed to build or ride single track in National Parks, period, and due largely to insurance issues, we have very few 'legal' downhill trails to speak of. It's not, as you so inaccurately claim, that there are 'no real organized trail building/maintenance organizations in place', because the few legal trails that do exist are very well built and maintained (WSMTB and others). This results in trails being put in 'under the radar' and surviving until either someone gets hurt and looks for someone to sue (normally the local council), or the local government get wind of the trails and go in with a bulldozer. It's happened countless times in the past, and it'll happen again. So please, in the future, keep our trails to yourself.

Dancie (Mar 22, 2009 at 18:49)
My apologies. I didn't realize this would be so controversial. I was trying to show my appreciation for the trails/terrain and to help "share the ride". The last thing I want to do have trails get shut down.

kiwibob (Mar 22, 2009 at 21:36)
Showing trail appreciation is not worth much if the trail's not around for others to enjoy as well. Nothing would show the sincerity of your apology and suggest that you actually care about other riders, like having this article REMOVED FROM PINKBIKE. That way we stand a chance of keeping our trail, and I'll make sure I convey your appreciation to the builders next time I'm out there.

just-riding-bikes (Mar 23, 2009 at 0:33)
Yep, thanks for the edit, touchy situation, wish it was like BC here, but unfortunately our government don't actually want us outside enjoying ourselves...

robholio Plus (Apr 28, 2009 at 16:21)
While I understand the situation, I feel it was incredibly ignorant, disrespectful, and selfish of kiwibob to rant at Dancie the way he did initially. It stank of the old 80's surfer mentality. If you build illegally, then expect it to be torn down, and if it's on public or government land, then it is fair game to whoever wants to ride it until it's gone. Hushing up trails does NOTHING for the sport and helps propagate a negative image of its riders and their priorities. How about reading supremematty's comment below and leading by example?

snook (Mar 21, 2009 at 2:01)
That looked awesome, kinda more fun looking than the Boneyard actually cos it's more natural.

where is this?
please PM me!
Below threshold threads are hidden