May 19, 2008 at 15:39
by Danice Uyesugi
Tweet
Apparently Bromont's history of rainy race days rivals that of Sea Otter, so when the clouds rolled in Saturday night and it started to rain it wasn't really that surprising. But like Sea Otter, this was the year to break that tradition, and we woke up to blue skies and a freshly watered, perfectly tacky course.

Let the races begin!There was no such thing as home town advantage for this race, as the course had only been built over the past 2 weeks. In fact, when I was walking it on Thursday with some friends from MMR, there were still a couple of unfinished sections - a course so fresh even Subway would've been proud! 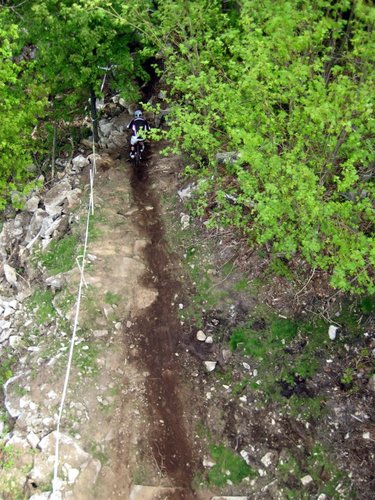 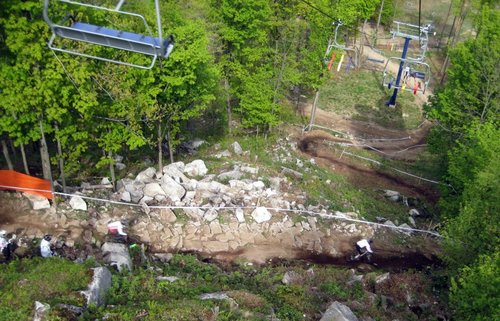 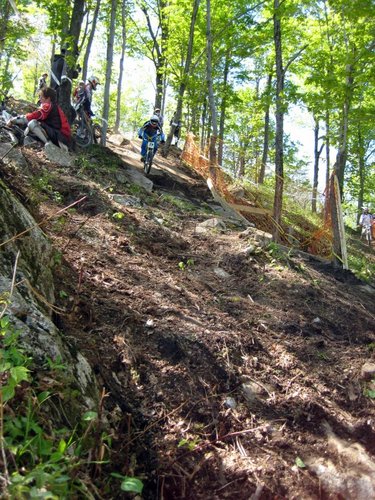 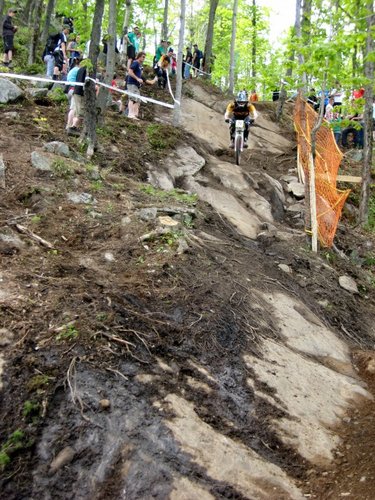 It had a little of everything so as to challenge all types of riders, including a short uphill section. I'm still not so sure that "gravity assisted" races need to have climbs in them, but this one was short enough that I really can't complain too much.

It started out fast, straight down a gravel road and then into the trees for some fun windy corners. Then back out into the open, down (and up) a gravelly path, back into the trees for a rock-strewn pump section, across some boulders and into the "tourist trap". This was the most technically difficult part of the course, with the highest crash rate, and was therefore the most exciting place to watch. You could either ride down some big rock steps or drop off the "diving board" rock on the left, both of which sent you into a sharp bermed corner, onto an off-camber rock roll (braking not recommended), and into another sharp bermed corner. I spied with my little eye the spine board hiding off to the side here, but thankfully no one was seriously injured during the race! 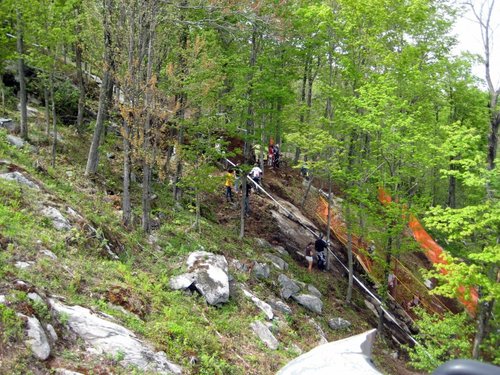 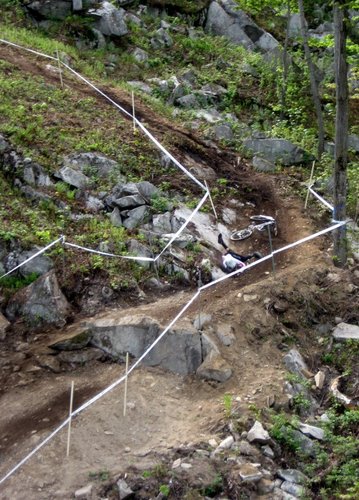 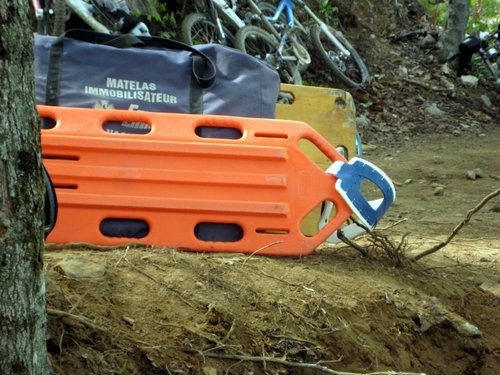 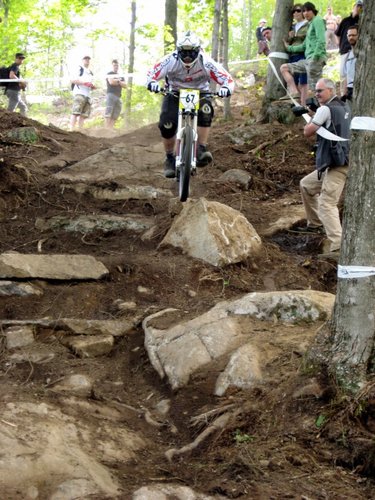 After that it was a couple more tight rocky corners, some fast wide bermed turns, back into tighter "catch you off guard" loose corners, and finally the straight bumpy pedal into a ditch gap (or ladder bridge ride around) onto the road and to the finish! 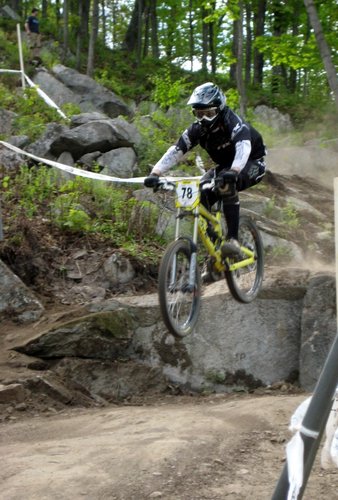 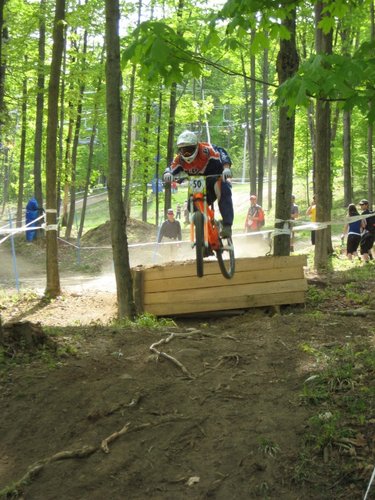 A fast course - winning men's time was 2.37 by Gerrit Beytagh, and Micayla Gatto finished first in the women's elite with a 3.06. The course was built not only for this race but also for the World Cup race coming here in August, and they did an excellent job making a fun and challenging course! This was my first Canada Cup race and I had a great time! There were so many familiar faces that I almost felt like I was back at home... until someone nearby would start parlez-ing en francais! 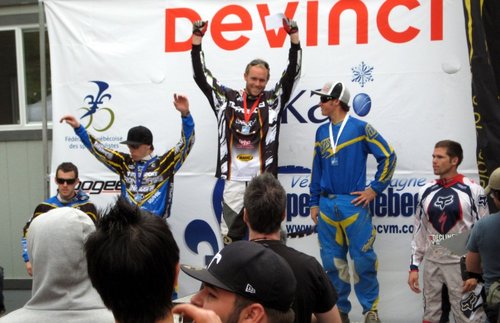 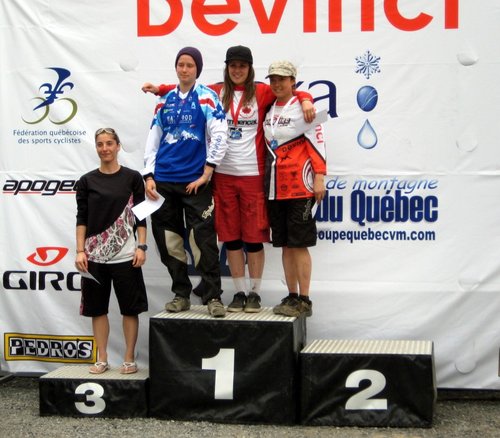 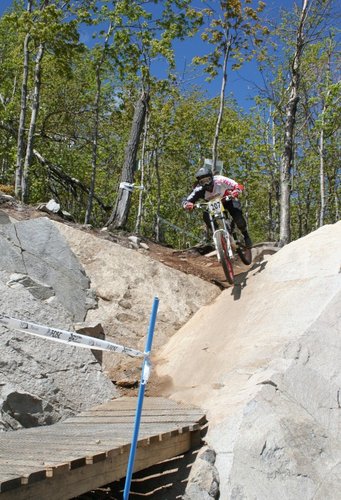 Many thanks to the Devinci gang for their very friendly support at the race! Now it's time for a few days off, and then back at it again next weekend - Canada Cup #2 at Mont Tremblant!

Danice and the rest of the Pinkbike.com/Devinci DH team are proudly supported by:

lalodh (May 20, 2008 at 9:21)
I have raced two world masters champioships there and it is one of the most beautiful places to ride and very challenging.
The locals are the nicest people you can meet.

wilson4forlife (May 20, 2008 at 13:58)
bromont rocks but tremblanc will be even better just look at the course this year it is insane and really wet so there are no braking stops live ride and race tremblanc and bromont canada cup see u guys there this weekend

alex-loranger (May 26, 2008 at 17:41)
I was at tremblant this past weekend. I wasn't fond of the trail nor the organization of the event. The fact that you had to bike down this plain loose rocky trail(it was long and there was this one really muddy section) to even access the race and to boot you had to climb up this big hill to get to the start. It was alright but it was hard to manage to get alot of runs in. Bromont was much better in my perspective. I did like the last rock/rock face section at tremblant though.

hedi (May 21, 2008 at 16:02)
Bromont was a dream, this week end it's Tremblant and it won't be so sweet, the course is bull shit, exact same as last year with just a bit more erosion. Just climbed it an hour ago.