Jun 18, 2008 at 8:57
by Danice Uyesugi
Tweet
There’s nothing quite like being told that you have been selected to compete in the World Championships. I think it must be many a downhill racer’s dream – I know it was one of mine. So to actually be here in Italy, mentally preparing myself to race the course, is absolutely amazing. We’re only a few days into the trip but here’s a look at what the team has been up to so far.Day 1, Saturday: 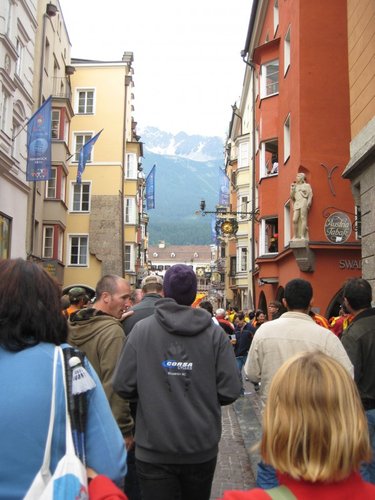 Myself and teammates Rob, Miranda, Simon, and coach Chris Colbeck arrived on Saturday morning in Innsbruck, Austria. We met up with Trenton and team mechanic Mike Rothdram, and spent the day walking the streets of downtown Innsbruck. We were all pretty jet-lagged and fighting to stay awake, so it was probably a good thing that the streets were filled with soccer fans partying like only soccer fans can - drinking, yelling, singing, dancing, parading around in costumes and face paint, and blowing horns. Apparently the Euro Cup is going on and there was to be a game that night in Innsbruck. There was no way we were dozing off amidst all that mayhem! 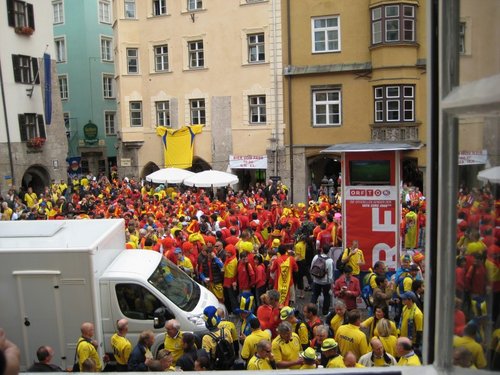 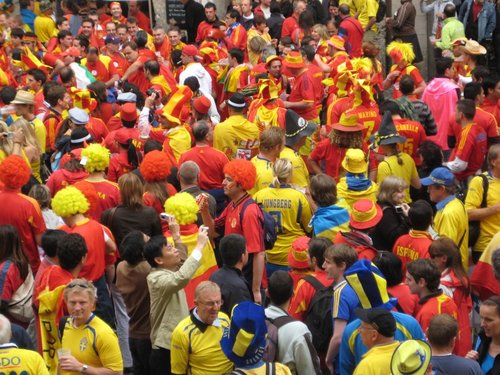 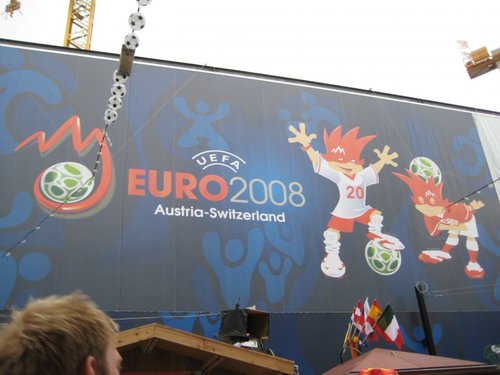 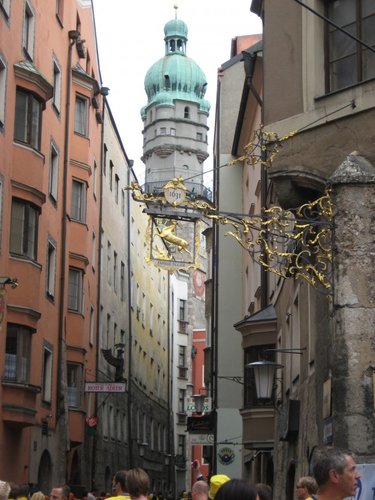 At 5pm the French Connection arrived: Marie Eve, Kim, Hans, Yann, and Philippe. We packed up the vans and headed out, driving 200km south along a twisty road with breath-taking scenery to our destination: Val di Sole. Alex and Micayla were there already, having just spent a few days riding bikes in Pila, Italy. We unloaded the vans and aaaaaahhhh… sleep time! I don’t know about everyone else, but I was running on about 4 hrs of sleep over 48 hrs. I was actually tired enough that I turned down going out for pizza… in Italy! There will be more pizza days to come though. 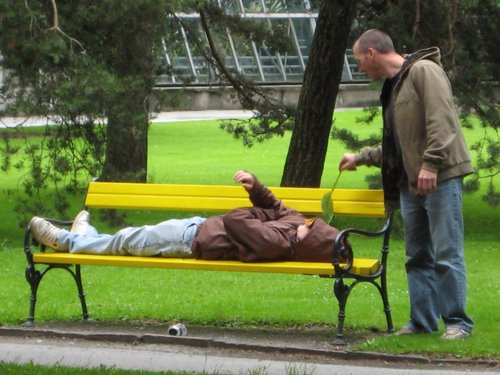 Ok Simon was tired too 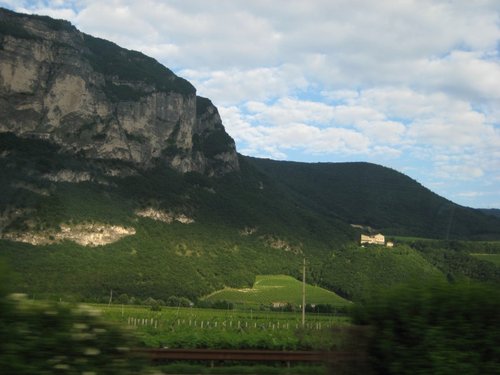 Build bikes, pedal around, enjoy the fact that I’m in Italy! Myself, Kim, and Marie Eve went exploring up a windy road and met some friendly Italian cows. Eat. Sleep. 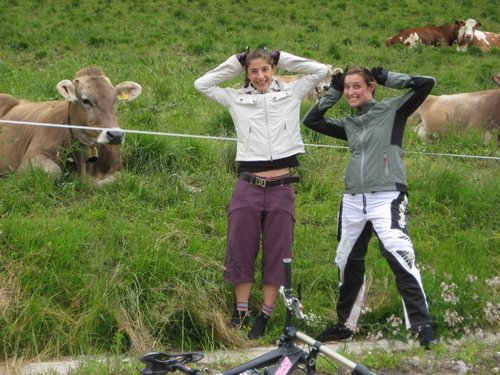 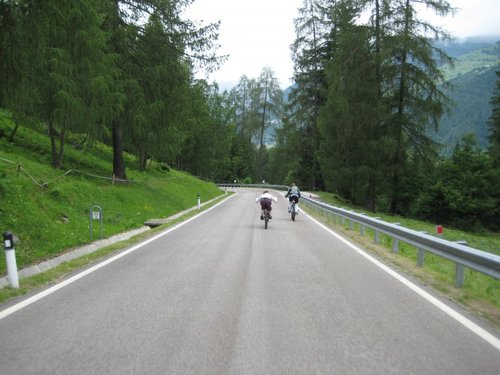 Finally we were allowed to check out the course! We’d all heard that it was a steep course with lots of roots, but the girls on the team decided that we wouldn’t get scared before we’d seen it for ourselves. Walking the course took about 2 hrs – it was steep section after steep section with lots and lots of thick slimy MUD. There were a few flat sections to break up the steepness, and quite a few rocks and roots to break up the mud. Not much in the way of jumps or drops until the very end, where there was a blind ski jump type launcher into a flat wide left hand corner. It looked like it’d be a super fast course if it was dry, and a great course for spectators to watch if it was wet. To me the course looked like a whole lot of fun! For some reason the thought of slipping and sliding down a mountain on my bike makes me giggle inside.

Course practice from 9 – 12… interesting to say the least. There were people sliding out all over the place, and everyone was pretty much caked in mud. Any of the lines that I thought I’d seen the day before were gone, and the first couple of laps were mostly spent just trying to stay upright as long as possible. The rain let up for a little while, but the air was still so moist it was almost impossible to use goggles due to fogging up issues. Of course there were the super-pros like Hill, Rennie, Peat, or any of the Athertons there, flying by, making it look neither steep nor slippery. My third lap went a bit better, but I sure do wish I had some good mud tires on my bike. They’re hard to come by now that everyone needs them!

So far I’ve had a great time here! Riding my bike in a different country, meeting all sorts of people, preparing to race in the World Championships… it really is a dream come true!
I’ll keep you posted on the days to come!

Danice and the rest of the Pinkbike.com/Devinci DH team are proudly supported by:

Best of luck at the race!!!

bansheeair (Jun 18, 2008 at 13:11)
I've seen Danice ride in similar conditions: steep, rocky, rooty, muddy and wet. She's got this dialed. lol We are all cheering for you back here at home.

I'd like to bee there to watch the run, but I guess I won't be for other reasons.. Cheers!

huckoveraduck (Jun 18, 2008 at 12:52)
But!.. Jst as its getting butter smooth...your wheels, forks and limbs simultaneously explode!! All because you didn't feed your cat.

downhilldro (Jun 18, 2008 at 12:59)
sweet, nothing like a little cultural experience followed by kick ass riding! have fun and good luck, there is some tough racers out there!