Feb 8, 2017 at 14:39
by Defiant Racing
Share
Tweet
With a successful 2016 race season in the books, Defiant Racing decided it was time to step up its racing program. The evolution of Defiant Racing into what it is today is based on our mission to develop and support high-level downhill and enduro racers to be competitive at both national and international levels. With our goal set to develop and support accomplished and aspiring World Cup racers, the team has obtained UCI MTB Team status for 2017 and have an exciting new roster of racers consisting of four Professional riders, three Junior Expert (Cat 1) and one Under 14 development rider. 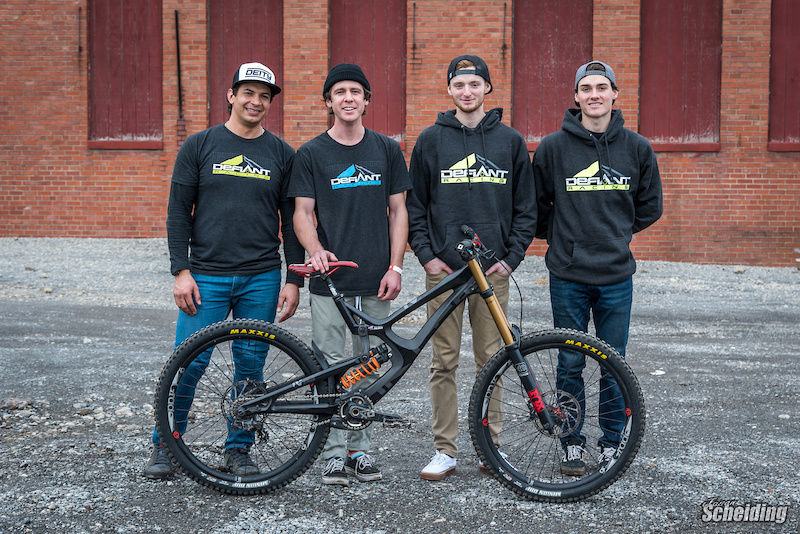 Defiant Racing is proud to announce the signing of 2016 Pro GRT race winners Shane Leslie and Tanner Stephens. Shane, the 2016 USA Cycling Pro GRT Champion, finished the season as the #1 ranked Pro in the United States by USAC points. Shane has been racing for Intense Cycles for three years and we are excited to be a part of his continued tenure with the brand. Tanner Stephens, winner of the 2016 Port Angeles Pro GRT and recent University of Colorado graduate will be spending his summer racing alongside Shane. Shane and Tanner will race the entire UCI World Cup Series but will also compete in the Pro GRT and Eastern States Cup Series when not in Europe.Rounding out the pro lineup are teammates Mauricio Estrada and Dylan Yoder. 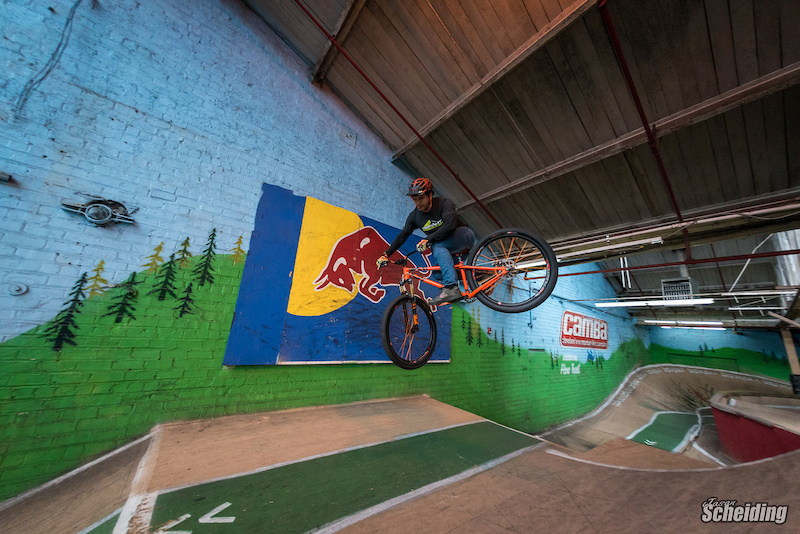 Mauricio Estrada, newly signed Defiant Racing rider and current ESC Downhill overall champ, brings much experience to the team. There is hardly a racer on the East Coast that does not know the Colombian-born ripper. Mauricio is one of the friendliest and most humble racers in the game, period. Our final pro rider is Dylan Yoder. Dylan has just completed his first season as a pro and rode to a 3rd place overall finish in the Eastern States Cup downhill (Atlantic Cup) Series. We’re excited to see what Dylan can do riding and racing alongside Mauricio and the rest of the team. They will compete and enter in UCI events when points and schedules allow. 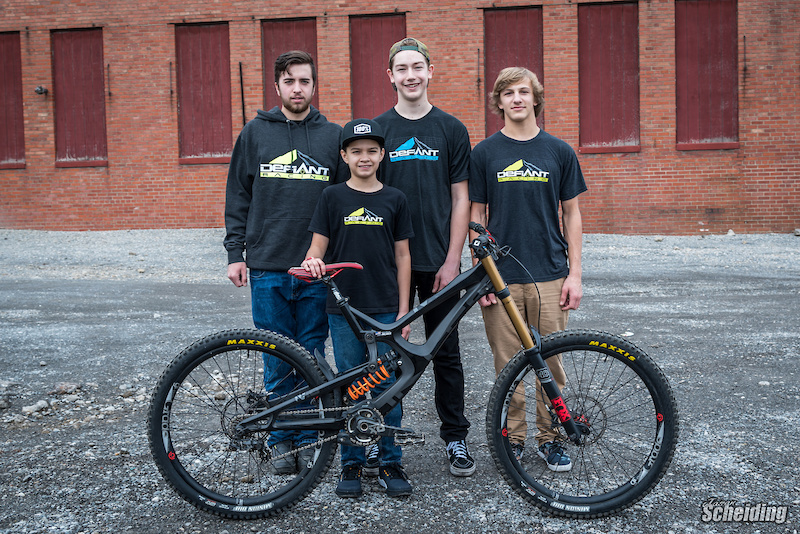 Joining the Pro riders are three Junior Expert riders, Josh Henn, Ryhan Lopatic and 2016 Pan American Bronze medal winner in San Jeronimo, Peru, Titus Nicholson. Each one of our Junior Expert Racers has shown respect, discipline, hard work and amazing talent and we’re stoked to be able to provide them with a clear development program to help them reach their dreams of racing as professionals in the World Cup someday. School comes first so Josh, Ryhan and Titus will race select World Cup, Pro GRT and Eastern States Cup Events.

Lastly, Defiant Racing welcomes back 13-year-old Michael Maldonado as a developmental rider. In his 4th year of racing downhill and enduro, Michael has another three years before he can race in the Junior Expert Category at UCI World Cup events. We believe that he will benefit greatly from riding with his professional and junior expert teammates. Michael will race select Pro GRT and Eastern States Cup series. 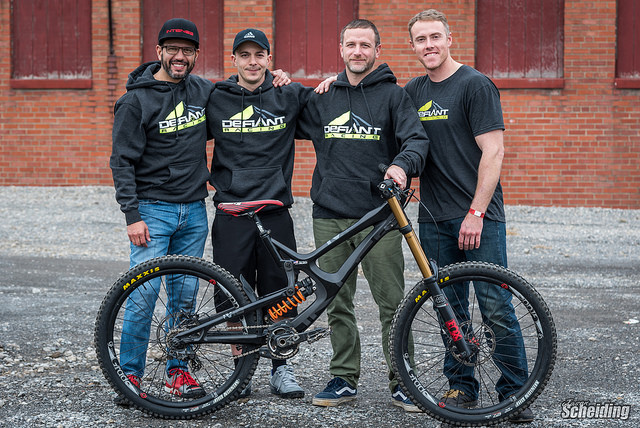 Three former downhill racers manage the teams' affairs and athletes. Joey Palmer, John Rowan, and Nelson Maldonado lead the management team. The domestic mechanic duties will be handled by Jim Sylvestri. Defiant Racing is very fortunate to have forged a strategic partnership with former Intense Cycles mechanic/manager Ivan Jimenez and his new UCI Team – IJ Racing to support Shane and Tanner at UCI World Cup events in Europe. Thank you, Ivan!! The team also has Fitness and Training coordinator Kent Sammons offering riders training support and feedback should they need it. Kent, the owner of KS Fitness, offers comprehensive training programs that are designed to help riders improve their strength, conditioning, and give them increased explosiveness and power. 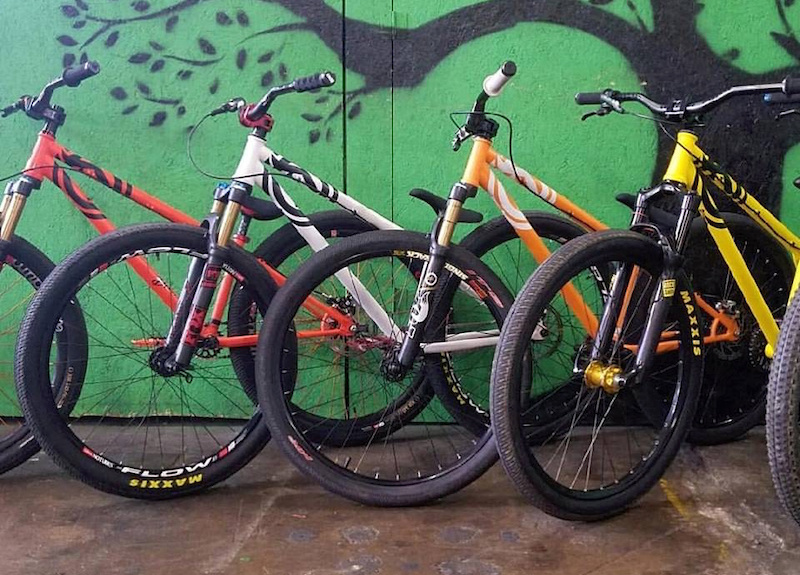 Sam Wilson of Intense Cycles has handled the team for the last two years:

“Intense Cycles is proud to continue its support of Defiant Racing for the 2017 season and we are looking forward to helping take the team to the next level both domestically and internationally. We’re definitely excited to see what the future holds for this talented group of riders!”

"100% is very happy to be supporting Defiant Racing this season with not just helmets and goggles but also our new gear line! The dedication and drive by team staff to help team riders advance to the elite level are what American downhill racing has been lacking in years past and we are excited for the opportunity to be involved. We couldn’t be more excited to see what this promising team accomplishes in 2017!"

Deity Components will be the full contact point sponsor for Defiant Racing. Deity and Defiant Racing have worked together since 2014:

“Defiant Racing has been involved with us for years now and it’s been incredible to see how professional, passionate and dedicated everyone has proven to be! This year marks a huge step for both Deity and the Defiant Racing Team as we continue to join forces towards global domination. We couldn’t be more proud to have this UCI Gravity Team flying the Deity flag on the US National and World Cup Stage and have the utmost respect for their work ethic and character on and off the bike. Defiant Racing embodies everything that Deity is about and we can’t wait to see them at the top!”

We are excited to represent the great companies that have put their faith in our racing program. To find out more about Defiant Racing visit our website. Please follow our athletes and the team on our social media accounts.

shaun-ridefast-michael (Feb 9, 2017 at 6:20)
Any chance of putting out a video/video series of the riders and their talent?

deityusa (Feb 9, 2017 at 11:34)
We will definitely be working on multiple edits with the guys! Some of the fastest USA racers on this team and we are excited to showcase just how fast they are!

cypress-mtb-club (Feb 10, 2017 at 6:21)
Good to see Mauricio Estrada on this team.
Below threshold threads are hidden