DokonjoDaikon amosdesign's article
May 8, 2019 at 2:27
May 8, 2019
Built Not Bought: The Story Behind the First Amos Design Bike
Good effort, and not a simple construction either. Impressive. 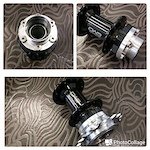 Very nice work! It's great to see new ideas being tried out.

DokonjoDaikon paulaston's article
Oct 20, 2017 at 7:01
Oct 20, 2017
Schwalbe Magic Mary 2.6" Apex - Review
CRC are selling them in 26 x 2.6. The problem is that when they arrived (ordered the Purple DH Addix version) they had 2.5" written on the sidewall, and when I pulled my old 2.5MM off the bike and checked the carcasses, the pretend 2.6 measures exactly the same carcass width as the old 2.35. Another point is that even in 26", my tyre weighed in at 1400g exactly. Grip is pretty good though, and they don't seem to be wearing down or taking damage (and I'm not exactly a "finesse" rider)

DokonjoDaikon RichardCunningham's article
Oct 9, 2017 at 2:54
Oct 9, 2017
WTB Scraper i40 Rims - Review
What size does it measure up as? I'm can't be the only one who gets irritated with aspirational sizing measurements on a lot of tyre sidewalls these days. Case in point: recently ordered the new 2.6" Schwalbe MM Addix DH tyre off CRC, came with 2.5" written on the side, but measures up exactly the same size as the 2.35" MM that I just pulled off it.

DokonjoDaikon mikelevy's article
Sep 22, 2017 at 0:40
Sep 22, 2017
Carbon Fiber Valve Stems, An Improved Dropper, and 6D's Updated Helmets - Interbike 2017
@willbam: You're spot on about the embodied energy of Aluminium, but the difference is that the Aluminium is 99% recyclable, versus only about 70% for steel, and -let's be honest- basically nobody is recycling rarbon, and I'm not seeing any commitment for Investment there either. But the biggest misconception is when people talk about "carbon" they think of the bike frame itself, and not the piles of bagging, peel plies, Infusion mesh breather fabric, trimmed material, mould release agents and all the other gumpf that is needed for making carbon bits, not to mention all the parts that didn't make it because of quality issues (although the in-plane undulations in my Race Face SixC handlebars are pretty shocking by aerospace standards).

DokonjoDaikon paulaston's article
Sep 15, 2017 at 5:26
Sep 15, 2017
Carbon Conundrum - Pole Bicycles Ditch Their Plastic Project
And the guy building the latest Bugatti should be able to afford that also? Mountainbikes and supercars are not household necessities.

DokonjoDaikon TitoTomasi's article
Jul 26, 2017 at 7:15
Jul 26, 2017
Tito Tomasi has Adventure in the Alps Down to an Art Form
Epic achievement. Average 80km/day, average 2800m climbing per day... when you factor in slow parts of the route like that via ferrata, that's impressive. One thing that I don't get about these long adventure rides is how to keep the GPS alive - lots of batteries, or is he using one of those solar chargers? Anyone know? Been toying with one of these rides (scaled down!) but this always seems like a sticking point to me.