Video & Photo Story: Flowing Down a Handbuilt Slalom Track in the Netherlands in 'Homesick'


Niels Bensink. You might remember the fast Dutchman from his Divergence film which was featured on Pinkbike last November. Being ranked number 4 the for the Dutch Olympic BMX team in 2020, Niels just didn’t make it to Tokyo, which made him change his mind after 18 years of BMX racing. Niels decided to move to British Columbia early in 2021 to live with his girlfriend and fellow BMX racer Drew Mechielsen and pursue his dreams over there on a mountain bike. With his plan to focus more on riding the big bikes he soon got to experience the Canadian riding scene and started to visualize a track in the Netherlands where he grew up. 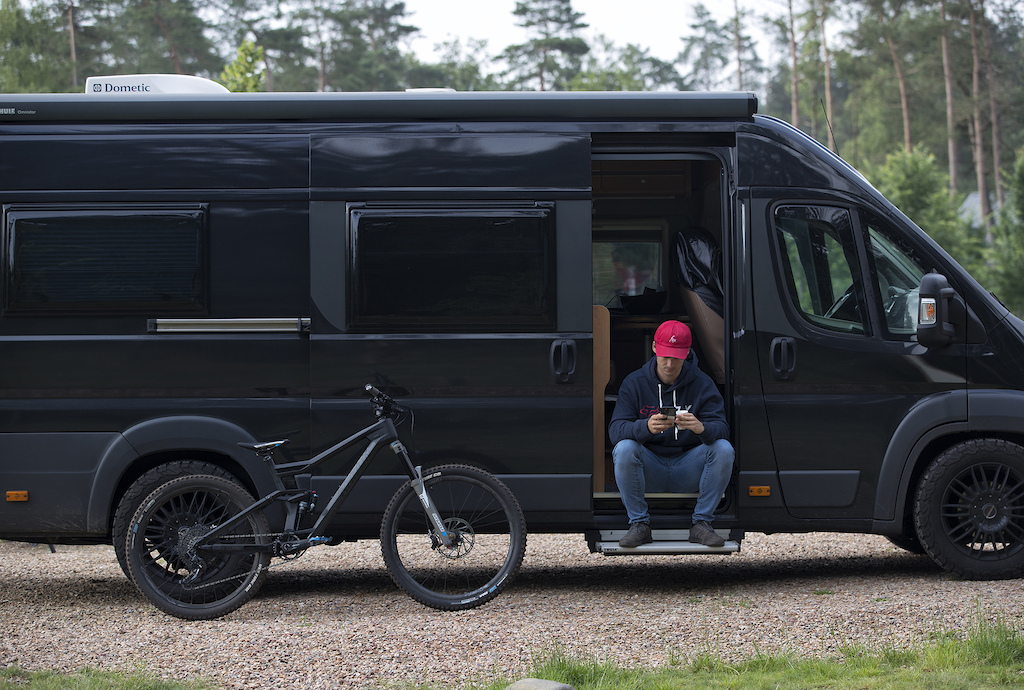 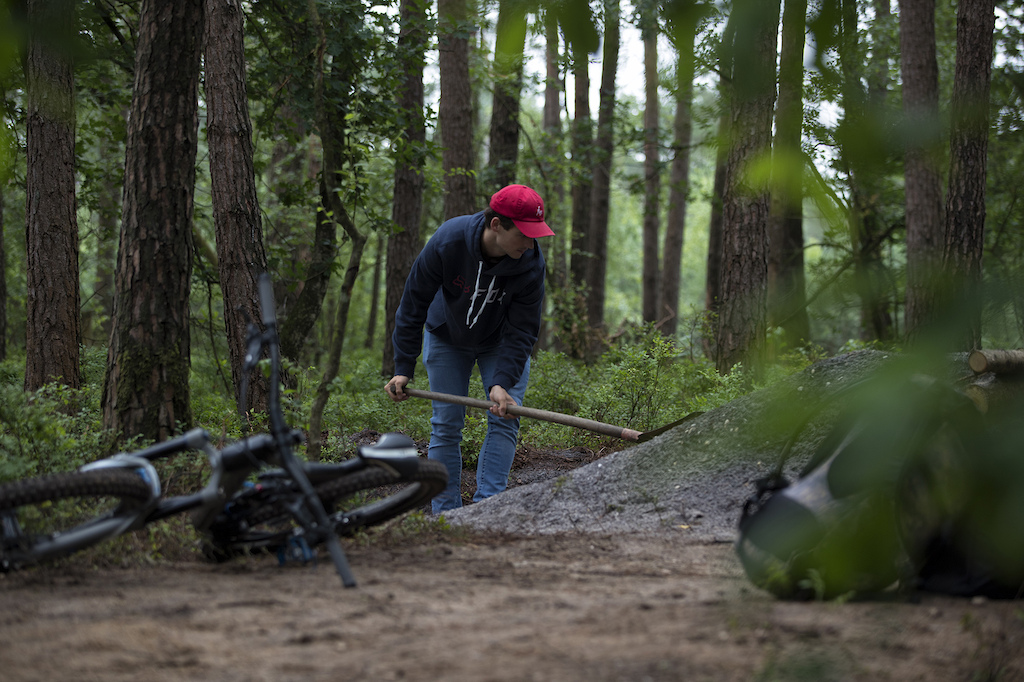 Ten days of digging with a dedicated build crew resulted in a real cool track. 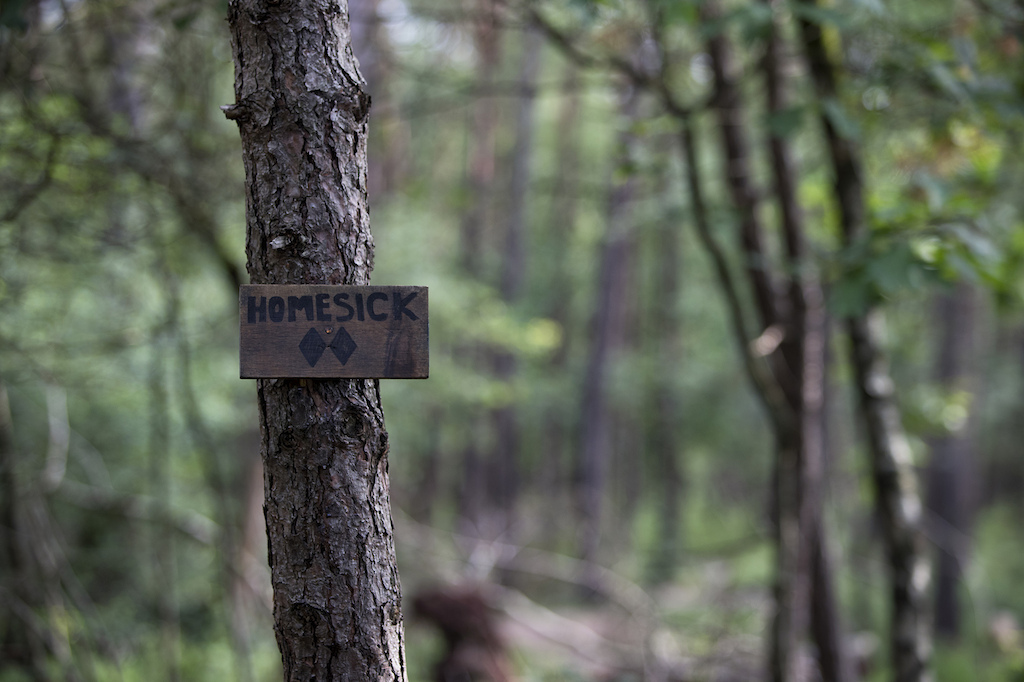 Homesick is the name of the trail, related to Niels' recent move to British Columbia.
Niels had always wanted to build a trail from scratch and now the perfect reason came up, inspired by Bas van Steenbergen’s Dream Slalom edit. Niels came back to Europe for little over two weeks last July to participate in the Crankworx Innsbruck pumptrack and dual slalom races where he came away with a bronze medal in pumptrack.

During the days before Crankworx, Niels and his build crew managed to build a fairly small but highly technical track to produce a video edit. The schedule was tight because after the races there were only 2 days left to film and shoot photos. 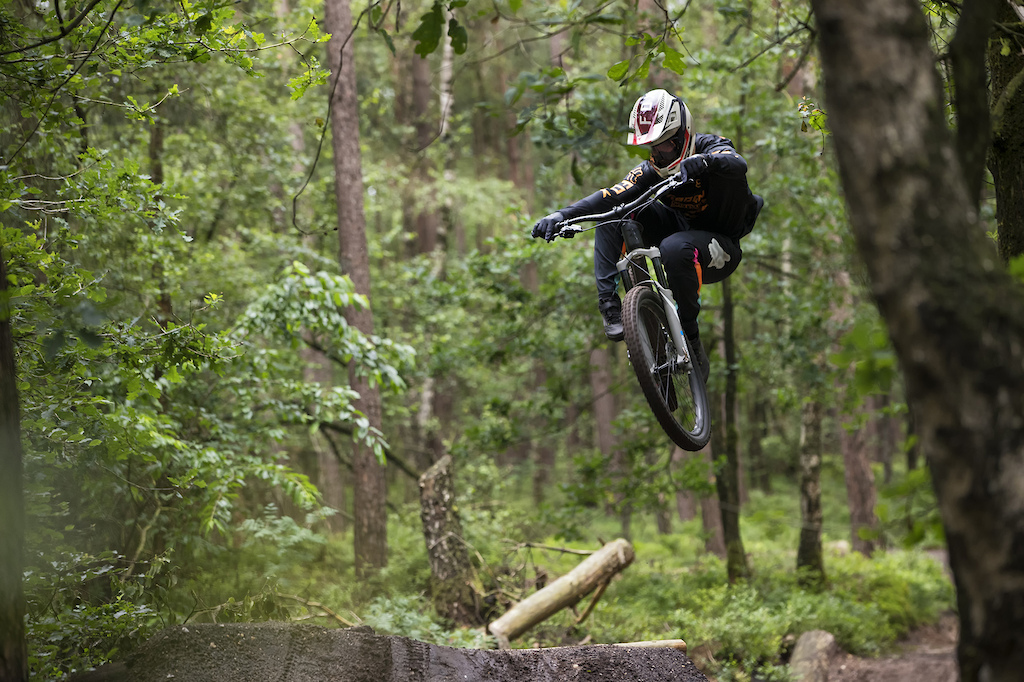 Being ranked in the top 5 for the Dutch Olympic BMX team in 2020 and 18 years of racing under his belt, Niels is not afraid to get some airtime. 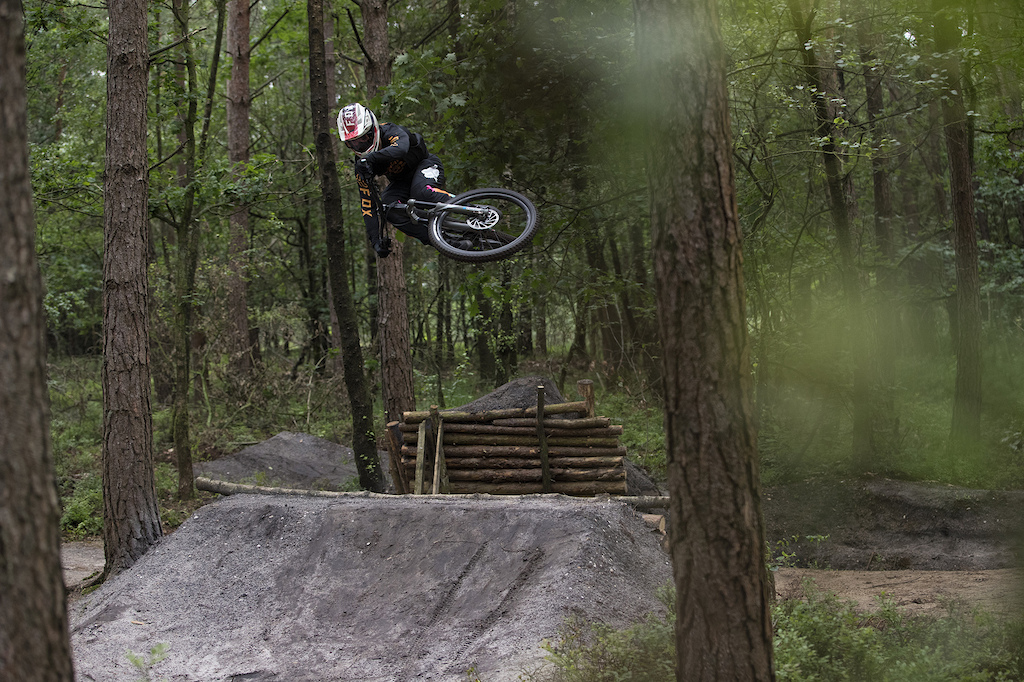 This sharkfin is by far the most technical feature on the trail.
15 minutes away from his family home lays this local mole hill. An area where Niels used to go with his grandparents when he was a kid. Nowadays there’s a small bike park to be found, build by local shredders.

Niels asked them if he was allowed to build a trail there to film, in between the other existing lines, and that the locals could of course enjoy the new line themselves when the video would be done. The track’s a combination of dual slalom and BMX / pumptrack style stuff, with a few bigger jumps thrown in. Technical with a few big gaps, and fast. All hand built to perfection. The stuff you don’t see too much in The Netherlands. 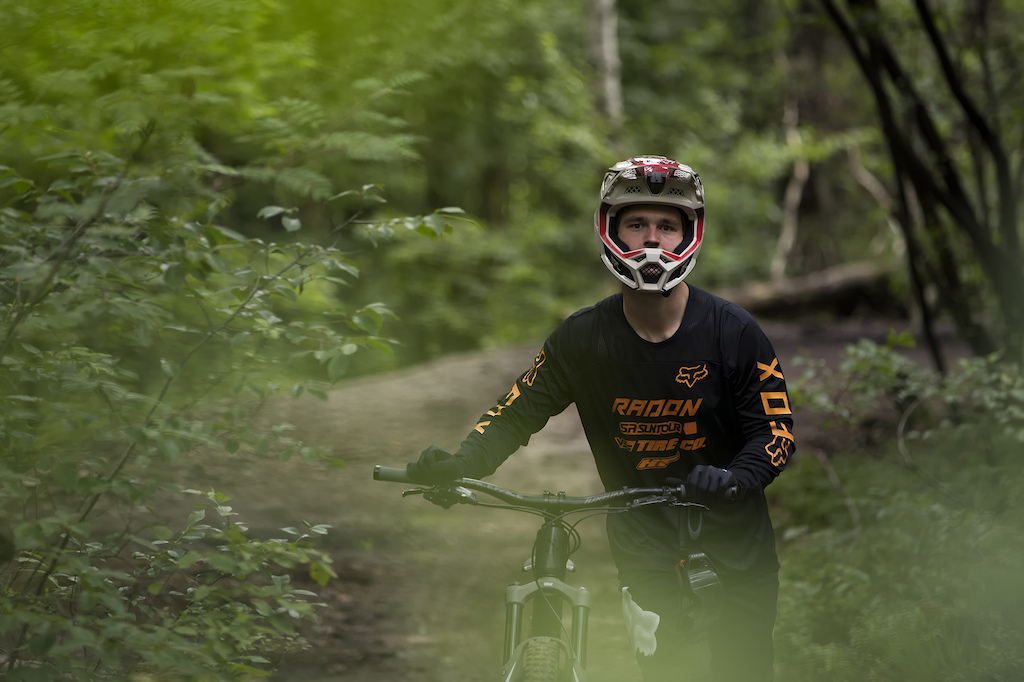 Niels is focussing more on mountainbiking nowadays. He's an extremely dedicated rider of whom you'll definitely be seeing more good stuff in the future. 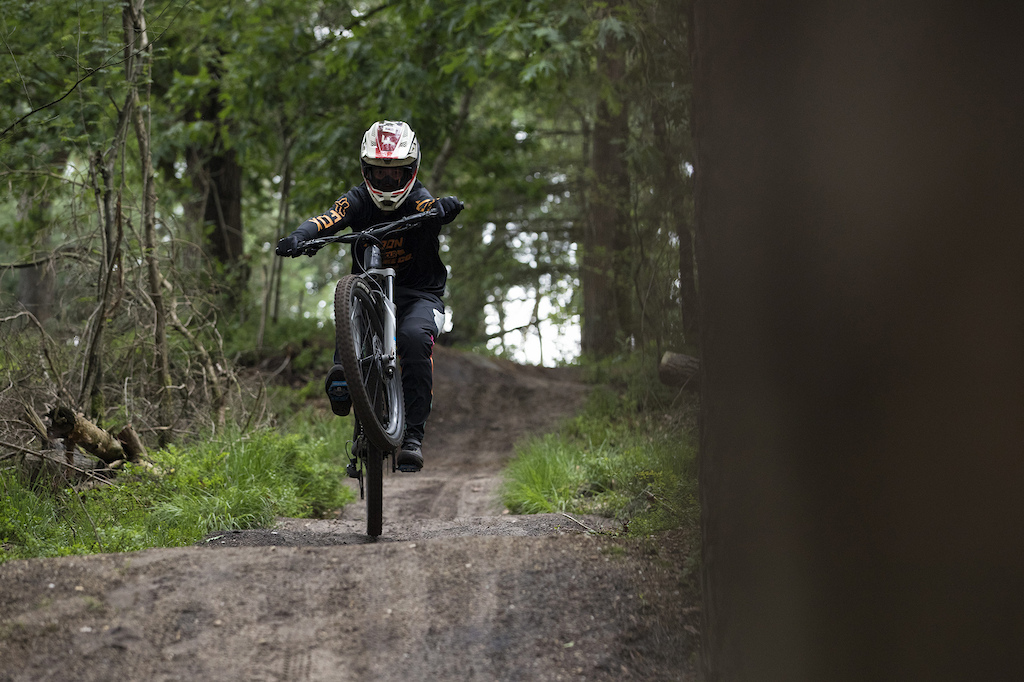 Manuals for days... Getting up to speed at the beginning of the trail.
At the same time it was Niels’ first proper mountain bike trail build so he had to learn along the way. Surprisingly no major adjustments had to be made afterwards. Everything worked straight away although there’s a few sections which require a lot of technical skill and were quite scary to hit. The area doesn’t have a very steep slope so it was important to build it in a way where speed could be kept fairly easily and not too much pedaling would be needed.

The 10 days of digging from dusk till dawn took place during a dry period and with the nearest water being about half a kilometer away it was a ton of work to keep the jumps and berms wet enough to pack. Eventually some rain fell before filming which made up for some prime dirt during the shooting days. 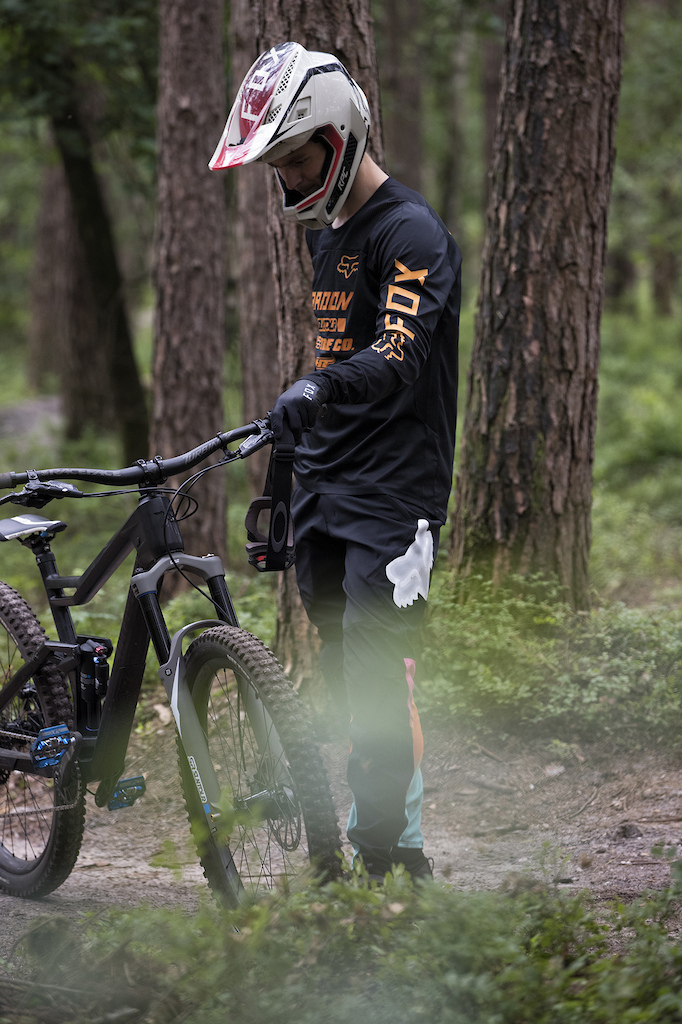 Niels is riding the Radon Jab 10.0 fitted with SR Suntour Durolux forks and a TriAir shock. 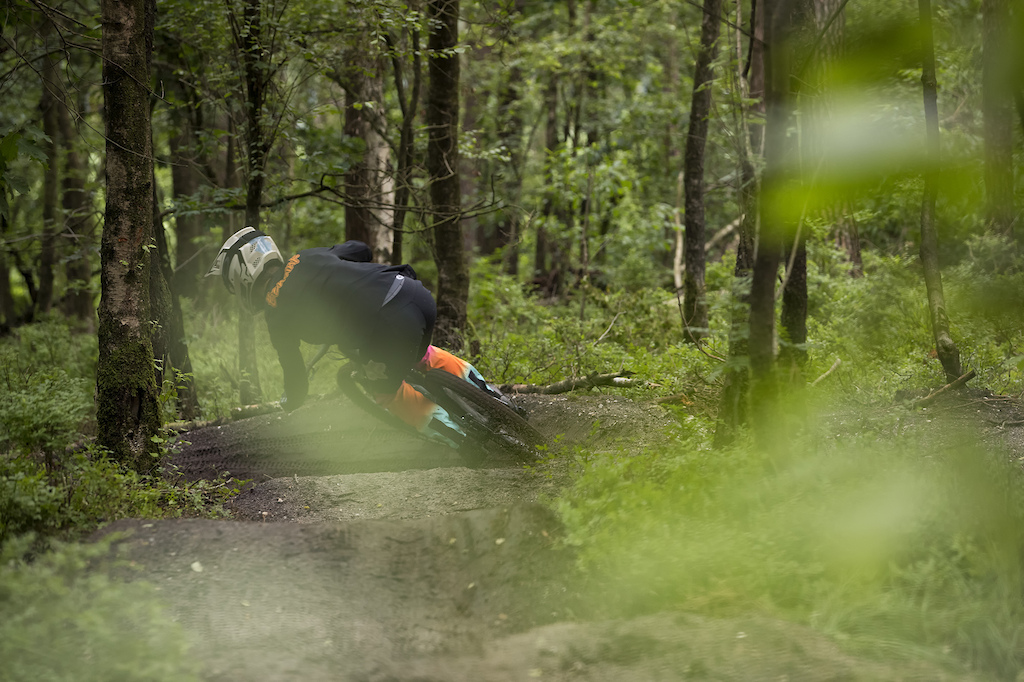 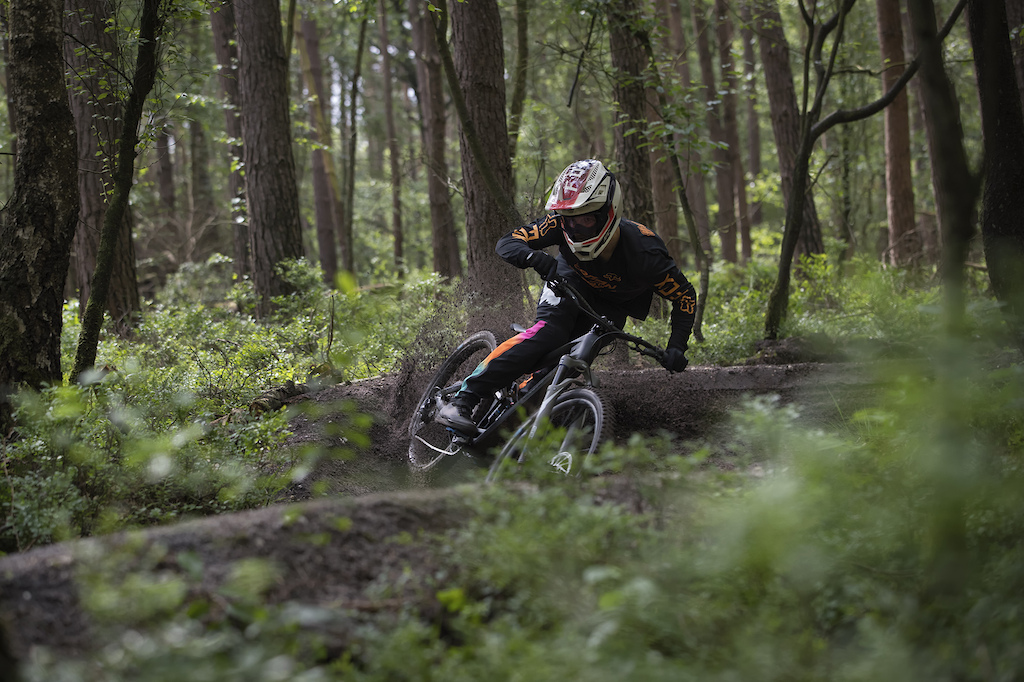 Hitting one of his favorite berms on the trail in full attack mode.
The hardest feature to build and ride was definitely the sharkfin. Lots of logs and stacking were needed to get the right angle. The run in is super sniper and there’s zero room for error. Once you’re in you have to hit it and with a tree blocking the view and with very minimal space for Niels’ handlebars it was a tricky one to hit. He once hit the tree during filming and got send off the bike pretty hard. Luckily all was good afterwards.

Niels’ favorite part of the trail was the berm / slalom section. It’s precise, high risk between the trees and feeling insanely good when hitting it at high speed. This is his first full mountainbike video and he’s already got plenty of ideas for a build in BC. Stay tuned! 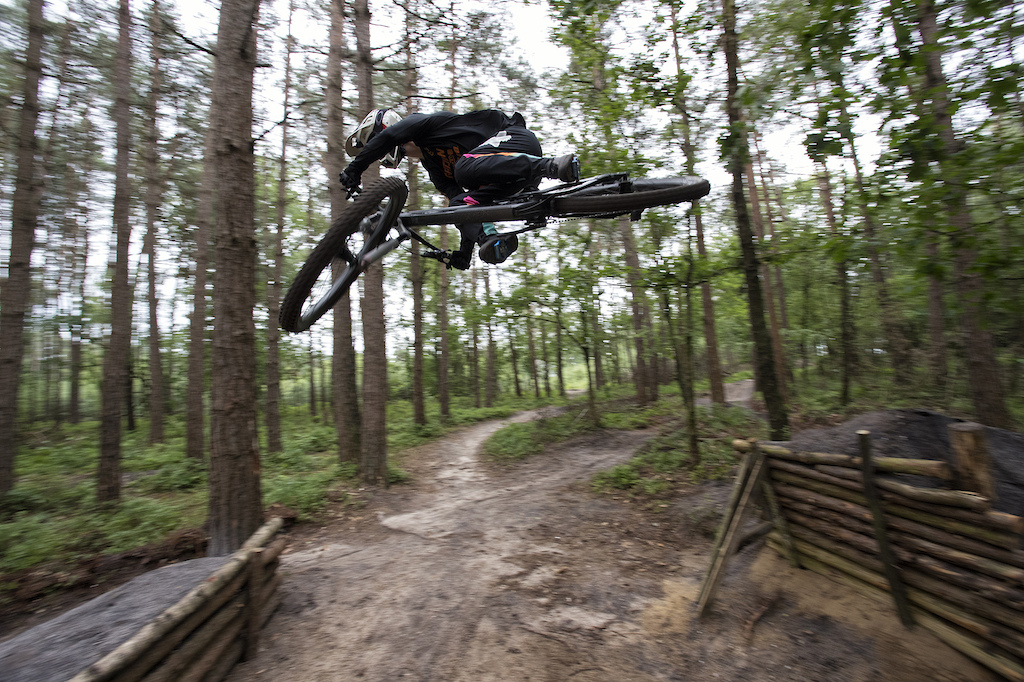 The sharkfin feature seen from the side. 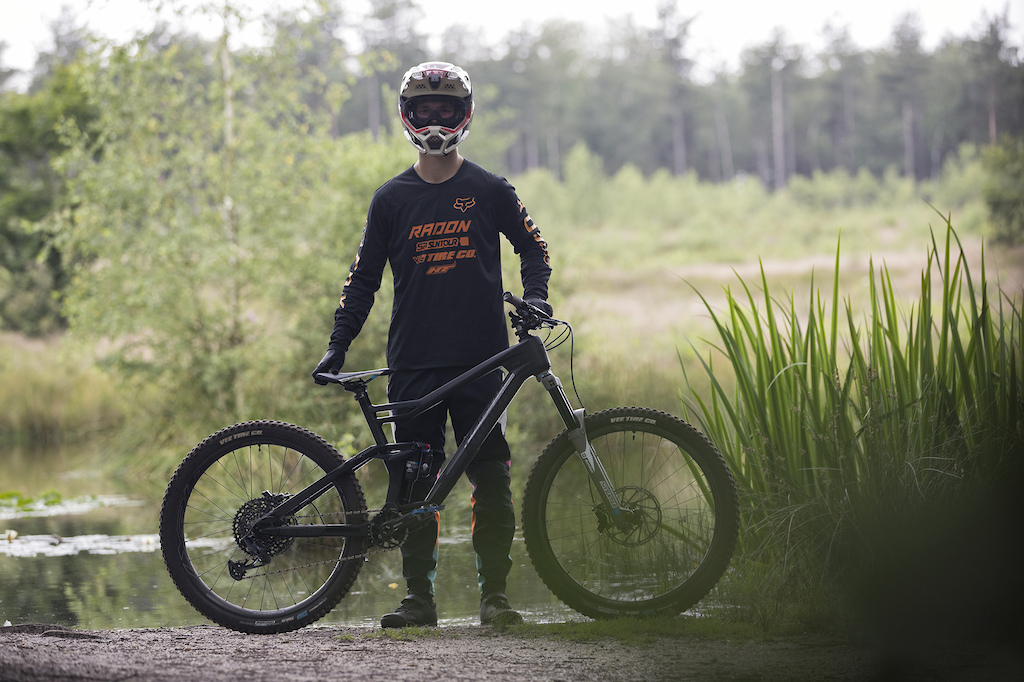 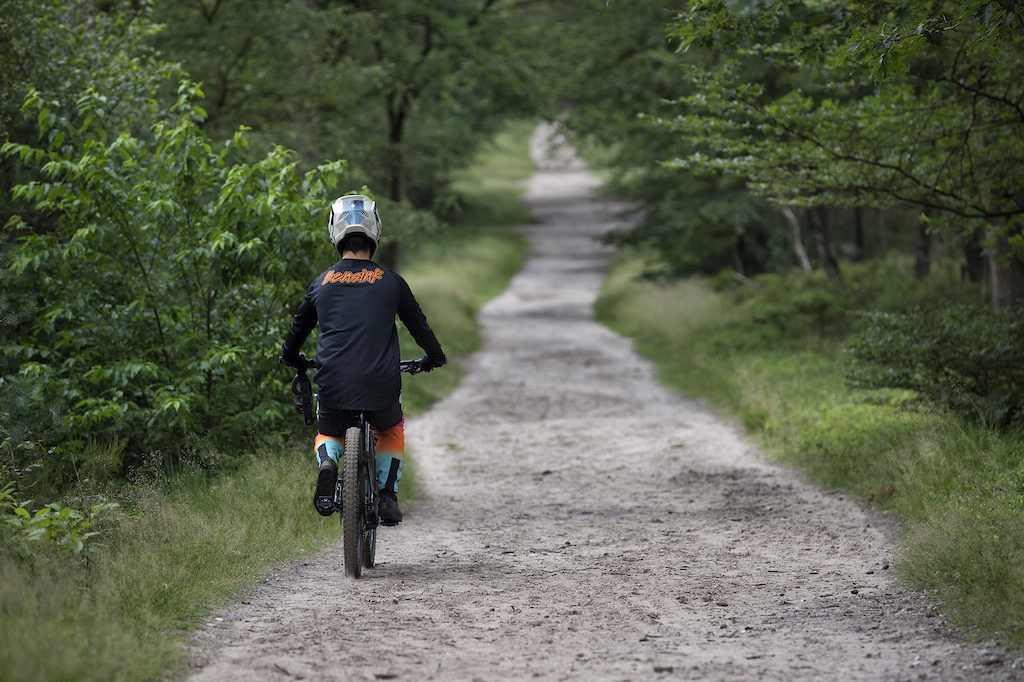 Done and dusted. It's time to get back to the van and catch a plane to Canada.

traildad69 (Sep 6, 2021 at 9:06)
Nothing like some pencil thin stick piles to make maintenance and upkeep keep ya on your toes in the years to come.