Rider Perspective: When It Rains It Pours 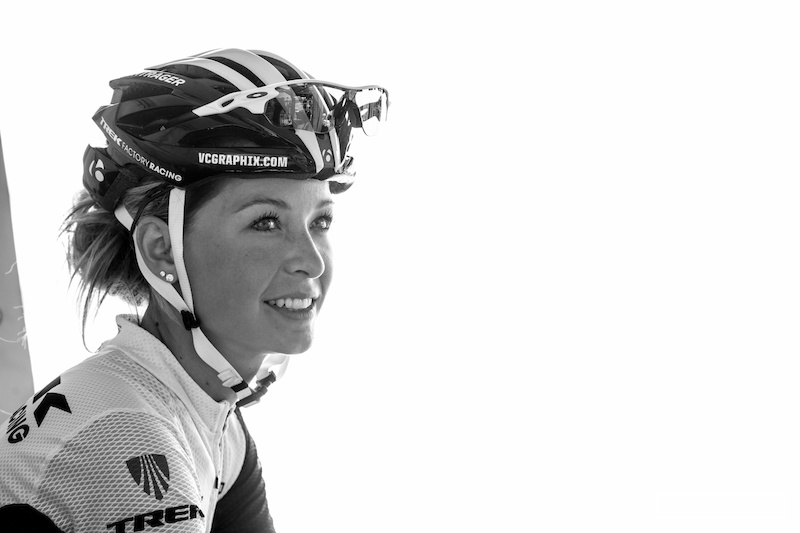 Straight from the World Cup opener in South Africa, the entire team traveled to Cairns, Australia, for round two of the cross-country series rather than flying home and losing another handful of days due to travel. We had quite the twist to start the trip, with luggage fees totalling over six thousand dollars due to all of us - two riders and three mechanics - not being Star Alliance members. Insane! We had a weekend free from racing between the two events, though, which had everyone super keen on spending that time at the new location - the rain forest. We found ourselves going for a lot of walks to try and spot the crocodiles, snakes, lizards etc. that the signs posted everywhere warmed us to be aware of. 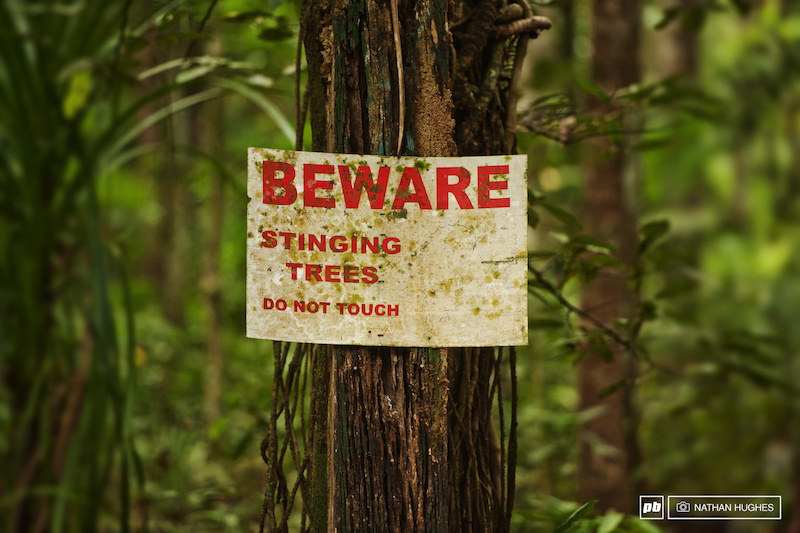 There's all sorts of dangerous things in the Australian bush. 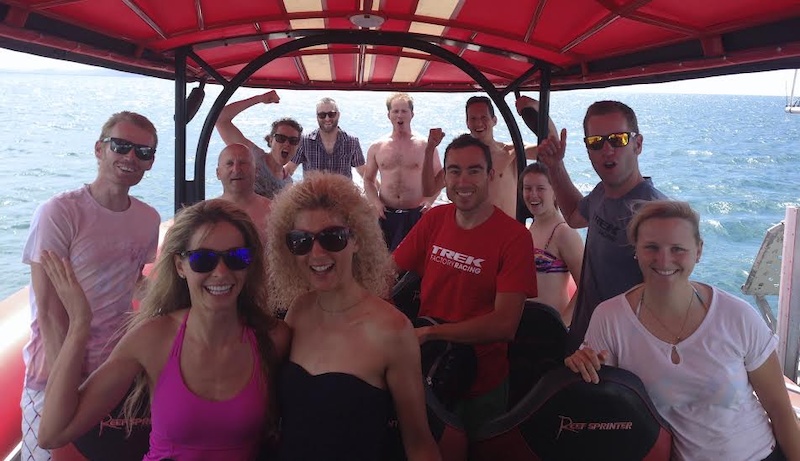 Early in the week a big group of us athletes and staff went to check out the Great Barrier Reef to do some snorkeling. 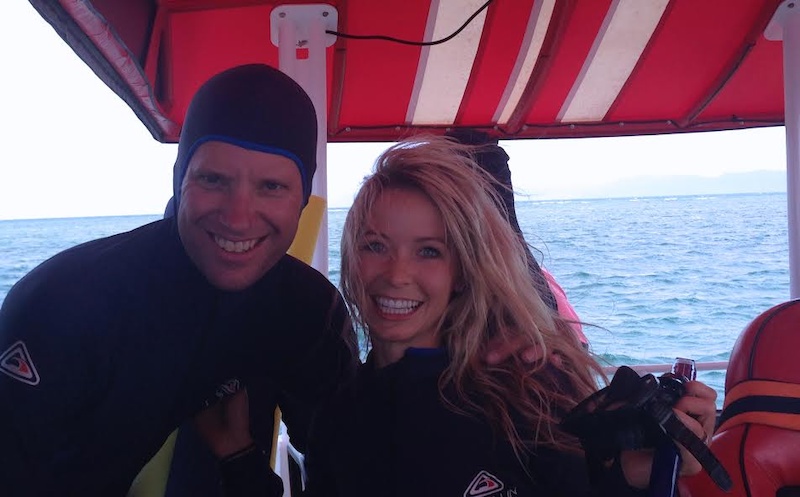 Dan McConnell and I even saw a massive sea turtle, which we were pretty happy about!

The slightly more relaxed week flew by and it wasn't long before we were right back into the swing of things by pre-riding the new cross-country race course. As any competitor knows, no race is ever going to be perfect - there are going to be bumps and hiccups along the way, and I think we were all in the same boat (literally) for the week leading into round two. Relentless monsoon rains had pretty much everyone second guessing what was to be of the course, and although the athletes and staff were trying to stay positive, I'm pretty sure that we all got a little tired of training in the crazy mud. Not only that, I'm also sure that the mechanics got a tired of changing bottom brackets and headset bearings nearly every day. 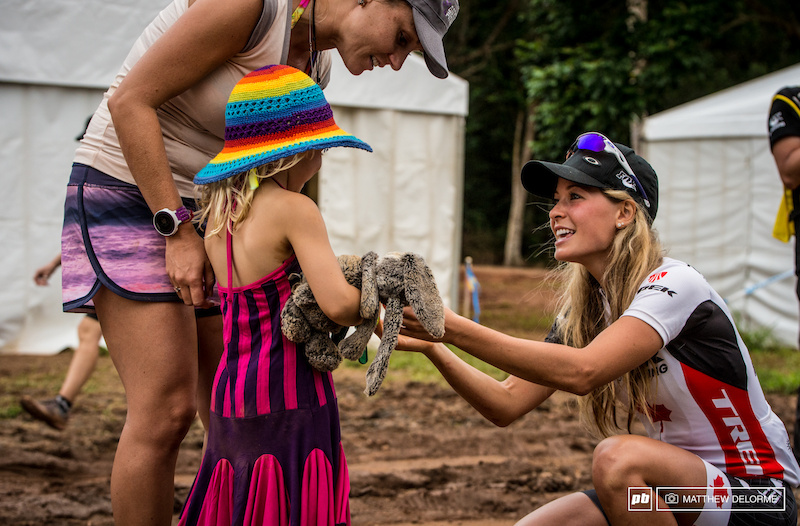 Making friends with the young fans in Australia.

Mother Nature didn't disappoint by the time Saturday rolled around, though, with the clouds breaking and the exposed sun obliterating the deep red mud. We ended up having perfect conditions for Sunday's race, and it must have been over 40 degrees with the humidity and not a single cloud in the sky. I felt like I was on a bit of a mission, and the constant talking to my coach back home saw me fine tune my training throughout the week in an effort to get my legs back under me by Friday. The goal was to build on the result that I had in South Africa, and I quickly found myself making a great start to find my way into the top five. The course in Australia really was a game changer, allowing top riders to quickly separate themselves from their competitors with multiple A and B line technical options, not to mention 180+ meters of technical climbing per lap. 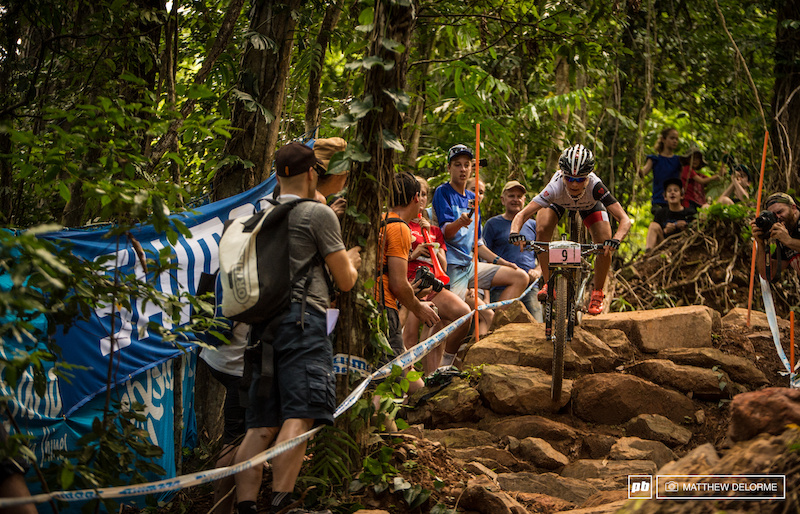 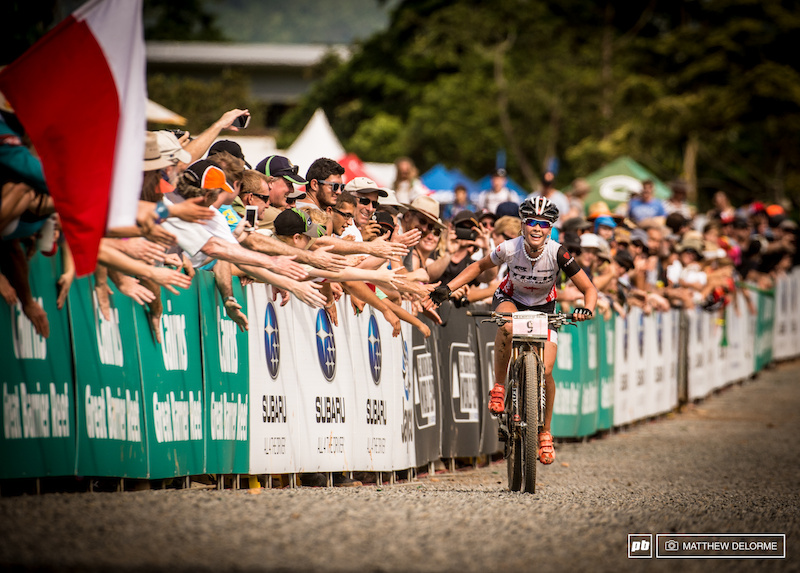 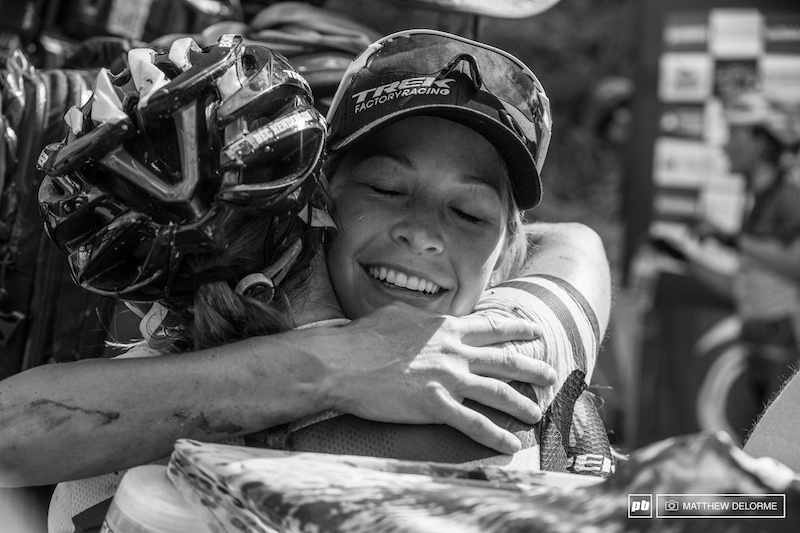 Aside from a front wheel change mid-race, I had a really clean performance and as good of a race as I could have asked for. I finished 2nd and feel really happy with how everything went - I'm now ranked 3rd overall. Fast forward through 48+ hours of exhausting travel and I'm all settled back home. I'm taking a few days to come down from the travel-high before getting back into a good training routine and prepping for the European World Cup rounds. I'm going to try and take a page from the Supercross boys this year by seeking consistency at each event rather being exceptional at only one or two, so let's hope that the European campaign offers another podium. 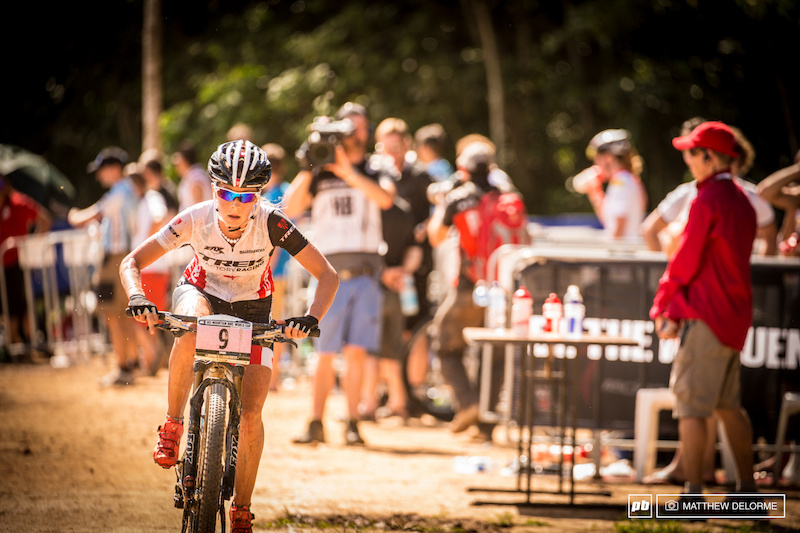 christianown242 (May 3, 2014 at 7:48) (Below Threshold)
Whats up with all the boring XC articles filling up my new feed. pinkbike is turning into a big fag page of dissapointment.

drivereight (May 3, 2014 at 8:18) (Below Threshold)
XC riders complaining about the MTB race course being too rough, what they think they are racing road bikes?

sicsoma (May 3, 2014 at 17:23)
@drewstinky...they are just children, expressing themselves the only way they know how--youtube style

courtneywylie (May 5, 2014 at 13:28)
The next time an article about Steve Smith comes up, will every please start talking immediately about who he should marry? Because that would make my day.

captyvatemedia (May 2, 2014 at 13:44)
Saw Emily Betty and clicked on the article, without hesitation.

digitalsoul (May 2, 2014 at 16:28)
I just came for the pictures, they have some serious 80's fashion going on with the pic of them on the boat before snorkeling.

louisidteam (May 2, 2014 at 13:47)
She brakes with the middle fingers. I did not think there were still some people doing that.

UncleTallboy (May 2, 2014 at 14:49)
Also, 'badfinger" braking gives the hand a wider area of purchase on the grip (pinky-index finger, as opposed to pinky-middle finger).
I wouldn't recommend it for everyone, but it seems to give me a tad more stability and control.

WhatsEnduro (May 2, 2014 at 20:17)
Im definitely going to have to second that. Braking with the middle finger seems to give better control on the brake as well as better purchase on the grip. With the index i found I would reef the lever. Thats just me though...

GiraffeInPurple (May 4, 2014 at 1:23)
I use my pointer fingers and I agree try not to use brakes at all just use your hips to side swipe your back wheel a lil bit to lose some of your momentum if you feel your going a lil to fast.

Barkit (May 2, 2014 at 14:22)
I'm always amazed to see how fast pro racers are able to recover from one race and get ready for the next one. Getting twice the 2nd position is definitly a big performance. Even after that, just a few days off and back to training and preparation for the next race... That sounds pretty harsh, but that's is the way you build such performances. Very impressive overall.

Barkit (May 2, 2014 at 14:26)
Dunno if that is a good example though. Emily Batty could just wear pretty much anything and still look classy.

Catfood-Johnson (May 3, 2014 at 18:15)
These (and other) articles and shots leave relatively uninitiated people like me with the impression that XC is a much more challenging discipline than Enduro. The terrain appears to be almost the same, and in XC they have to power uphill too.

oldschoolj (May 2, 2014 at 15:15)
Great story Em! So happy for your 2nd Plc finish. Looking forward to seeing your next result and hearing all sbout this WC experience

ovadebarz (May 2, 2014 at 14:29)
Doesnt seem right they have the ability these days to use mechanics and team support during the race.. the old once you start "its up to you" defined the genre and kept it close enough to normal weekend mtb riders to then spark interest in the majority. The skills, the fitness and dedication is uber impressive. But the activity is more removed from the day to day MTBer then world cup DH IMO. No dis, great article, keep em coming

bman33 (May 2, 2014 at 15:26)
Agreed totally. Nothing against her at all. However, having a "pit" is not the essence of XC mountain biking. The original spirit was opposite of roadies. You flat, you fix it as a rider, you blow a chain, have a chain tool, etc. Having a pit for a full on wheel change isn't very independent. Precisely why choosing sew ups (tubular) tires should be considered foolish in mountain bikes.

"I'm pretty sure that we all got a little tired of training in the crazy mud. Not only that, I'm also sure that the mechanics got a tired of changing bottom brackets and headset bearings nearly every day."

Certainly tells you something about how poorly modern press fit systems and "sealed bearings" in the integrated headsets tend to deal with bad weather...no wonder so many customers come back after weeks or short months complaining about the bearings which have already cr*pped themselves

dhpig (May 5, 2014 at 12:04)
If you have ever had the good fortune to meet and talk to Emily Batty, you soon realize that her true beauty comes from within. First class person and a great ambassador to the sport.

AlexxxC (May 2, 2014 at 15:11)
It seems Pinkbike have clocked on to the popularity of articles featuring Emily Batty, and I can't say I'm complaining!

vinnycorleone (May 3, 2014 at 1:57)
What's with the necklace?
I hadn't heard of her (a great miss, I see that now) and googled a lot of pictures to catch up.
On nine out of ten pictures she wears that white thing around her neck.

harrisonscottson89 (May 2, 2014 at 16:30)
That is not Dan McConnell... it is one of the Trek Facory Racing Soigneurs Troy Lavigne I believe.

gnarbar (May 2, 2014 at 17:23)
because you are the love god of Doncaster wooing all the ladies with a kebab and a greasy chip butty

poundsand (May 3, 2014 at 5:00)
Ahaha, so funny all the people neg proping the comments... Either a bunch of feminists or dudes with too much estrogen feeling like they are sticking up for the greater good of this girl.... Shes hot, she knows it... These comments make girls feel good about themselves and you all just feel bad because you never hear it about yourself... Neg prop that