Tom gives you an insight into some very special parts that he has never shown to the public before that enable him to ride. 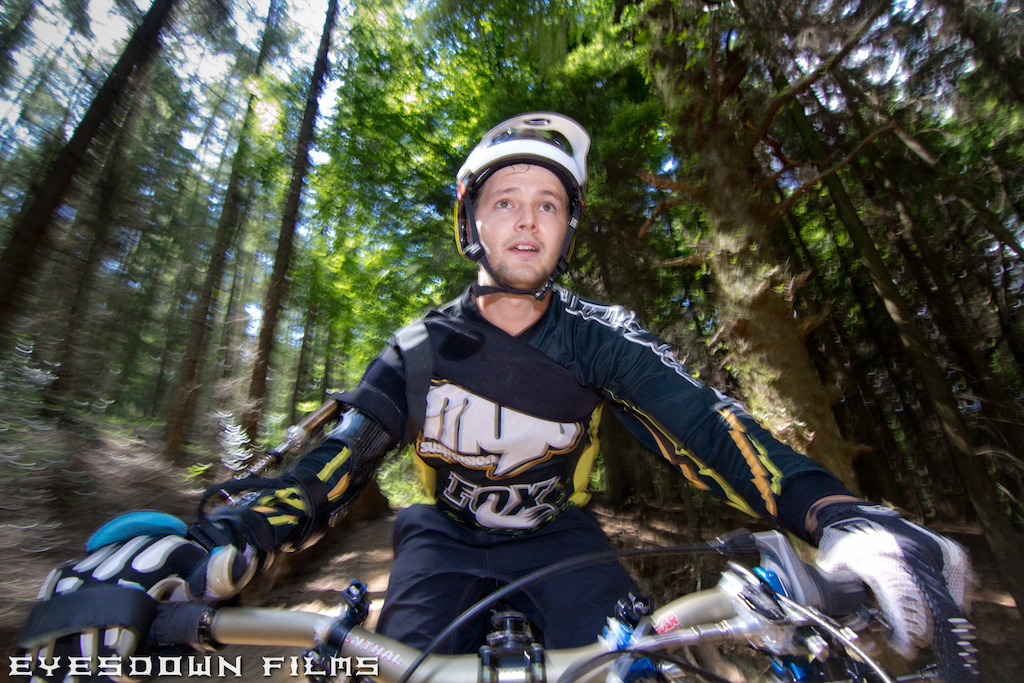 SlodownU (Jun 14, 2018 at 4:50)
Back in the day I used to race with a guy who lost his arm from the elbow down. He didn't wear a prosthetic, and race time he put on an old-school prosthetic with a metal hook, and held the bar somehow with that, and would crush the races. I personally think that all you dudes who think past your injuries and disabilities and keep riding are the most hard-core of the hard-core.

neimbc (Jun 14, 2018 at 4:25)
Fantastic. I gather your BPI left you with total arm paralysis? It must be quite the trick to grab the release pin when you need to bail! I also have BPI, but to a much less extent, where my arm is still functional with few limitations. I had a terrible crash not long ago that felt like I tore apart my arm (ambulance ride) and thought I had it go completely paralyzed. I would do the same thing if I had to - but your design is first rate. Keep riding and inspiring.

EyesdownFilms (Jun 14, 2018 at 5:21)
I use a wrist support with a climbing clip so when I crash and I pull my left hand off it pulls the pin. You kinda see it here - www.instagram.com/p/BjJlYZEhmaU/?taken-by=wewontbebroken.

anyexcusetoride (Jun 14, 2018 at 8:55)
Used to ride in the Surrey Hills and one day I was down there I noticed a guy riding with one arm. I managed to catch up with him later and his was a Polish dude living in the UK, I just had to tell him I had huge respect for him and it also made me feel super happy and inspired to see him still riding despite his injury (I never asked why he only had one arm). The same goes to you!

Funny story about that guy in Surrey hills - he was actually using a piece of old drainpipe and a load of duct tape as his connection to the bar (he had lost his arm just below the elbow) because someone had broken into his van the day before and stolen his tool box which contained his prosthetic arm!!! Who the Fk does that?! So since he and his mate really wanted to go biking that day, his mate has bodged this drainpipe contraption together so they could ride... and so there he was - out in the woods, riding, with his duct tape/drain pipe arm support and loving it! Made me smile!

pbuser2299 (Jun 14, 2018 at 3:38)
Was speaking to a dude at tweedlove with a similar condition, but on a roadie, it had 2 stems at different heights and angles and a single brake lever with a bias controller. Di2 and an electronic magura dropper would probably help simplify the bar a fair bit?

EyesdownFilms (Jun 14, 2018 at 5:23)
Di2 is mega expensive and I like to be able to control brakes separately. But I can imagine that was a clean setup! Cheers, Tom Wheeler

Bmackenz11 (Jun 14, 2018 at 8:23)
I give you a left handed high five. I have a shorter right arm, fused wrist and no thumb. I am very fortunate to have been born this way as I’ve learned everything from scratch, from day one....tabula rasa. My setup isn’t quite as amazing as yours but I struggle with the same issues as yourself, mainly forced weight shifts forward onto the bars. To counter that I’ve got an Ergon GP3 grip on the right bar. I run guide brakes (stacked like yours) because the reservoirs can be flipped and the stack is therefore tighter. I have the sram grip shift and a dropper post all cluttering the left cockpit. I run a 40mm stem and a riser bar oddly enough always cut to 740mm as welll. I also dislocated my shoulder on every Endo so I will be looking into that hope steering damper. I have no idea how to add pics or I would.

The Hopey steering damper is great. I'm just about to try out the CaneCreek Viscoset - www.canecreek.com/product/viscoset. Might be worth checking out if it fits your frame.

74tenomresc (Jun 14, 2018 at 10:20)
I remember when Tom's injury happened, pretty scary stuff. It's absolutely awesome to see he's still at it, I remember seeing a riding video of him a while back, he certainly has never given up. Inspiring stuff.

Good on you for the 3d printed fender, I've had that idea myself for a while. You should definitely try and bring it to market, there are basically no options out there except for the Syncros trail fender, and it doesn't have the greatest compatibility. Limited to Boost only, and it only really works properly with a 51mm offset CSU (aka 29'r forks with the longer offset option)

EyesdownFilms (Jun 14, 2018 at 12:55)
Thanks man! I'm keen to continue developing the mudguard... But it comes second after arm brace and attachment stuff because thats what let's me ride haha Keep an eye on the social feeds for further developments. Cheers, Tom Wheeler

mammal (Jun 14, 2018 at 10:57)
I passed a guy riding with a prosthetic arm, while riding up Mt. Fromme last week. I wish I took a better look at his attachment. Obviously didn't want to stare at the guy, but now I'm quite interested. He was definitely a strong rider though, as he looked to be on his way up to 7th Secret, and was doing a second lap around the same time that I was later on. So much respect for maintaining that much ability, especially in an area where you can't really avoid super technical trails. I had a thumb injury this spring, and found that difficult enough.

skawt-1 (Jun 14, 2018 at 11:43)
Very very impressed with that release mechanism, your stuff has been a huge inspiration to me over the years and I find your videos fascinating. A number of years ago I messaged you about brake setups, I managed to line 2 Formula T1 brakes up and use cable ties to pull the front with the rear. I noticed you were selling your adaptor a while ago? I might have to give it a try one day.

Last year, after about 3 or 4 years of prototyping, I managed to come up with a rideable solution to my own disability. It has given me a new lease of life on my bike but I am not convinced by my release mechanism at all, I wouldn't like to crash on it. My own system is made up of a cast that I strap my arm in to, the ankle joint of a lower limb prosthesis acts as the wrist and a prosthetic pin attaches to a device on the bar where a cable actuates the release mechanism which is looped round my functioning wrist.

How do you find climbing and weight distribution on the bike? I have found my descending has improved but my ability on technical climbs has suffered and rolling at slow speeds over "technical" flatter ground a bit awkward, works best with momentum.

EyesdownFilms (Jun 14, 2018 at 12:53)
Climbing is a bit of battle I have to say. I ride my road bike with just the tray and it's not terrible but with the brace off-road it's pretty tough.

Drop me an email on tom@notbroken.co.uk if you would like to discuss the release system further.

Anything to get out or stay out on a bike.

Years ago we set up a gentleman recovering from a stroke:
tandem brake lever to operate both brakes simultaneously;
upside down gripshifter for the rear gears and a thumbshifter for the front gears.

A stroke wasn't going to keep him down!

AVann6 (Jun 14, 2018 at 21:12)
Tom, I just wanted to say how cool this was to watch. I'm a physical therapy student and work as a bike mechanic when I can so this video spoke to about 90% of the time I spend awake each day. Super cool to see the awesome mods you've got going.

I checked out the website and didn't find the specifics- do you mind sharing the extent of your BPI? I could guess watching the video but I'm curious exactly what you have for muscle activation. Can you delve into exactly how you injured yourself as well? If not I understand, or perhaps you'd rather private message me.

Thanks for your time and keep that innovation going!

I pulled four nerves out and the fifth one was damaged. Ive had a few ops and have regained a good bit of shoulder support and a little bit of bicep but it fatigues extremely quickly.
This vid I talk about it a bit more - youtu.be/x23tHF4MENc and the full series I shot straight after the accident - www.notbroken.co.uk/video-series-2.

chagel (Jun 15, 2018 at 18:45)
I just wanted to see the setup but that was a really good bike check period. Good info about the fork, the shock, the cable routing and so on. Nice! I'd be interested in trying the Hope steering thing. Just to try it. And props on all your designs. Here is a hint/request. As an owner of several Santa Cruz bikes, i could really use fenders on the rear wheel so the shock would not be filled with dirt. Maybe you could also think about rear fenders ? ;-)

It was also cool to see your lefthand setup but I just want to see more bike checks like this with this level of depth.

Bclips33 (Jan 20, 2019 at 20:48)
Tom, this is awesome to see. I paralyzed my right arm in a motorcycle accident back in 2001 and have been wanting to get in to bikes for awhile now. It gives me hope and makes me happy to see what you have done. Is there an instructions or tips that you could share in creating your same setup you have on this bike?

Bclips33 (Jan 20, 2019 at 20:53)
Tom, I to have a paralyzed right arm as a result of a motorcycle accident back in 2001. Your setup is awesome and is something I have been looking for. Do you have instructions for building this? Or anything that you can share in helping me with the same setup?

fatduke (Jun 14, 2018 at 8:57)
I've met a couple of people with below the knee amputations, hearing their take on riding and now Toms it's great to see that with enough passion you don't have to stop what you enjoy.

bushwacked (Jun 14, 2018 at 5:14)
Great vid - love the passion. Makes me realise how much we love our sport and the lengths we'll (some more than others especially) go to to make it happen.

Bruccio (Jun 14, 2018 at 8:32)
@EyesdownFilms: yup, Alessandro "Carbonhook" Avigliano. Got is left leg amputated from the knee down after an accident. he will smoke me on the downs any day of the year

EskimoNelson (Jun 14, 2018 at 18:41)
Inspired by Tom's perspective, knowledge, and positive outlook. Keep up the good work and continue to shred!

EyesdownFilms (Jun 14, 2018 at 12:58)
I'm extremely tempted. I struggle on the climbs with my injury and the added weight on the downs could help stabilise it. Its only a matter of time before I get one. Cheers, Tom Wheeler

EyesdownFilms (Jun 14, 2018 at 13:00)
I do yes! It involves lots of feet and weird positions. My least favourite thing is getting tubeless sealent on my legs when fitting new tyres... That stuff is like super glue and I gotta cut it out. PS. Check out the RideFox UK YouTube to see me working on stuff one handed. That's my full time job. Cheers, Tom Wherler