Bike and camp and rock&roll - Gnomes' holiday at Wisler

Sep 27, 2012 at 9:34
by Frower Power
Tweet
When I got up at 5.00 and I saw overcast sky, although still lighter than the lead, I felt the need to follow the destiny - what else could I do? I was arranging the circus around the finish line, wondering when the pre-organizational fever would attack me. It has not came. Leaden clouds came instead together with – for better comfort – Wojtek Koniuszewski. At the moment when we were ending to mark the track before the finish line, heavens revealed their generosity, which, as a matter of fact, nobody prayed for. Pray or not – who cares, especially those who makes holes in the clouds. So we dressed waterproof jackets and drove to the shop to buy sausages for barbecue. Along the way we were contemplating whether forecasted 7 mm precipitation is big or small. We agreed that still it is not big while the water from under tires was splashing over passers-by. In the shop we took 50 sausages and we were wondering how to pack them. We looked at the gumboots lying on the floor. They were only PLN 20 per pair and had solid and high heels - just for the 7 mm precipitation and more. However, eventually we decided to take sausages in plastic bags and sympathize with Gnomes getting swampy from the bottom. 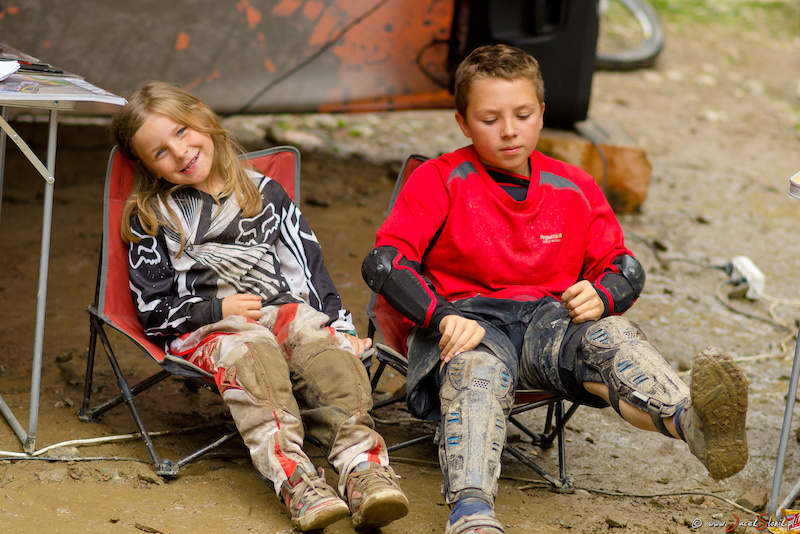 On the way back I realized that I had in my head a void, but I guessed it was better than panic. I saw the same in the eyes of parents of Gnomes who came here the day before to catch last moments of sunny weather. Dry track, although not the easiest one, was giving a lot of fun yesterday. Today joy of ride will be replaced by stress on traverses leading across steep slopes, which looked to become wet and slippery. It was good that those who came today did not have time for such thoughts. Pushed by reisefieber they were claiming for faster registration and starting official trainings immediately. Wojtek decided to take up a group of Gnomes and ride with them the hardest version of track (“let’s see how sick it is”). He called me from the track. In the background I could hear the sounds of battle. “If he comes back from the front line without casualties I will decorate him” – I thought. He did. After him slowly descended gnomes, experienced with first crashes. They looked like scout soldiers, returning from the jungle of Vietnam. They were confused but still you could see among the mud on their face teeth ready to bite. 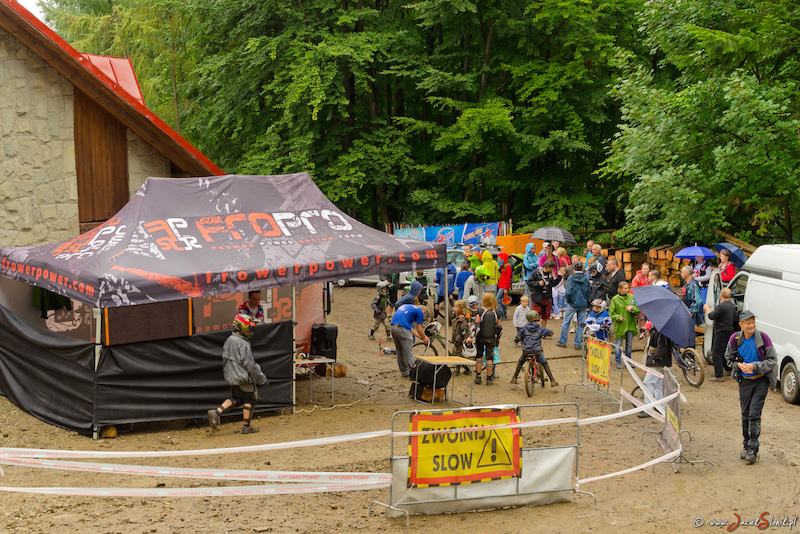 There was no other way than through the photocell so I decided to start the race. I announced that every Gnome had to decide which of the three options to ride according to her/his skill and strategy (so what, downhill is not just an avalanche descent from the top, but almost a chess game, at least in a rainy time), because not every option had to be suitable for fast ride under these conditions and may result in crashes, although crashes on a wet surface were safer than on the full speed when it was dry. Then I asked for a symbolic minute of silence and the show has began. 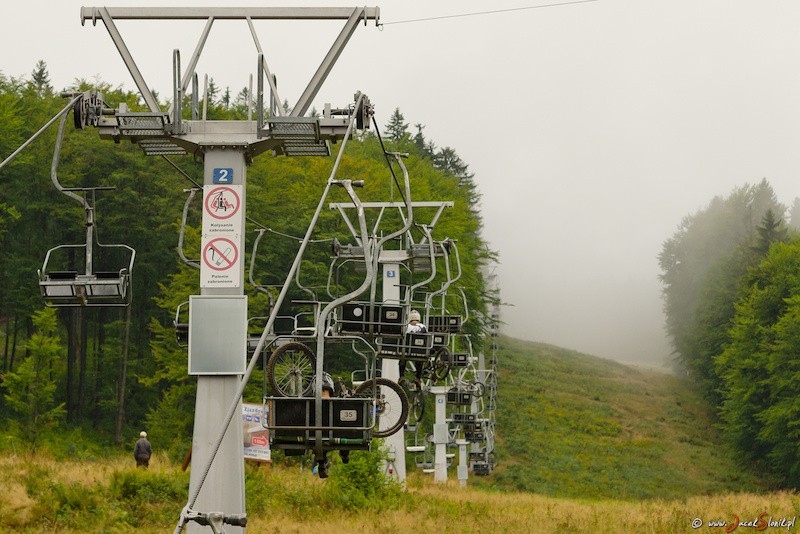 Ladies went first. The order of the first run was surprising for everyone, especially since the majority opted for the soft version of the track, which should favor the oldest of them - Inka Januła and Laura Wojtas. Although Emi Waliczek turned out to be the fastest before Marta maRACH Wypiór. Inka appeared at the finish line with a two-minute loss while Laura, as the only one who took harder variant, was only few seconds better. It was like a bucket of cold water (wasn’t it enough water today?) on them. In the second run both decided to shred as fast as they can through lighter option chosen also by remaining girls. In effect Laura, passing the finish line in less than four minutes, knocked out competitors. 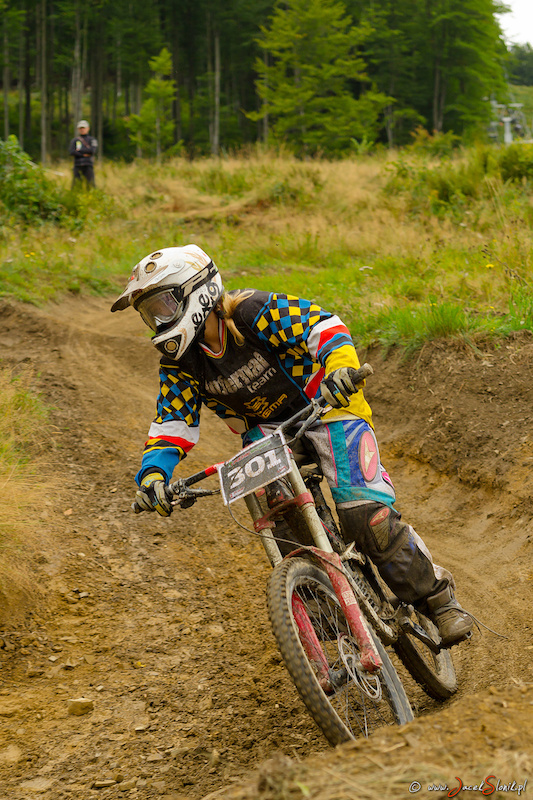 Inka went several seconds slower than Laura, but also several seconds faster than EMI, who, despite improving the previous run failed to defend her first position and fallen to the third place. The biggest fall was observed in case of maRACH - to the fourth position, supported by classic OTB at the entrance to the funpark. If it were not OTB, who knows what score she would have, since despite the crash she appeared at the finish line with a similar time as in the first run. 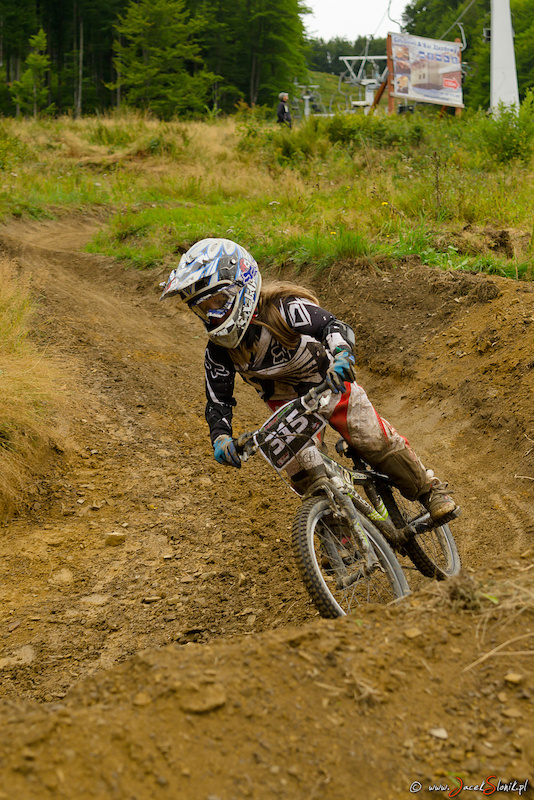 Since the tigress showed the lion's nail, it was a time for the young tigers to show their teeth. Here, however, we have seen the phenomenon described by Lorenz as aggression ritualized. 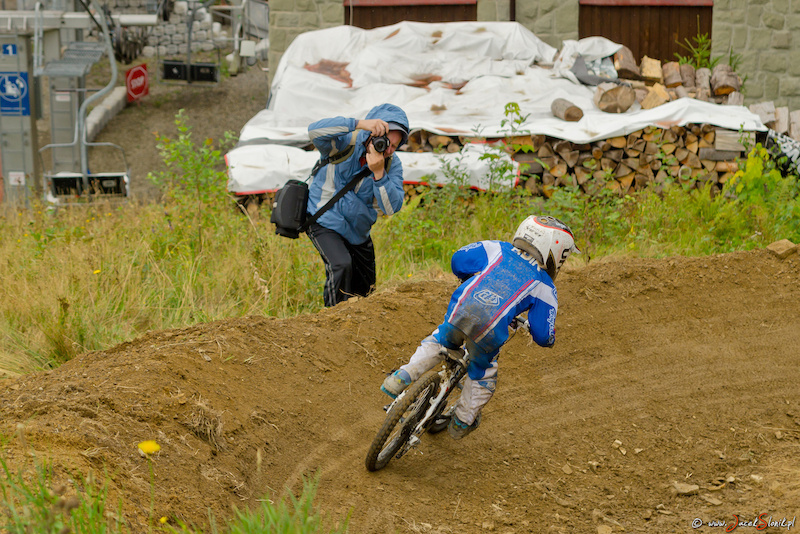 Despite determination present throughout the race, the youngest boys positioned themselves in accordance with their rating in the general classification. Mikołaj Mayki Zychowicz was the first after both runs and Adik Skórczyński was the second while Mikołaj Potyrało beat the third position in the first run and quit to race. It should be noted that Mayki’s score was worse than the result of Laura and Inka, what clearly demonstrated the growing level of competition among girls. 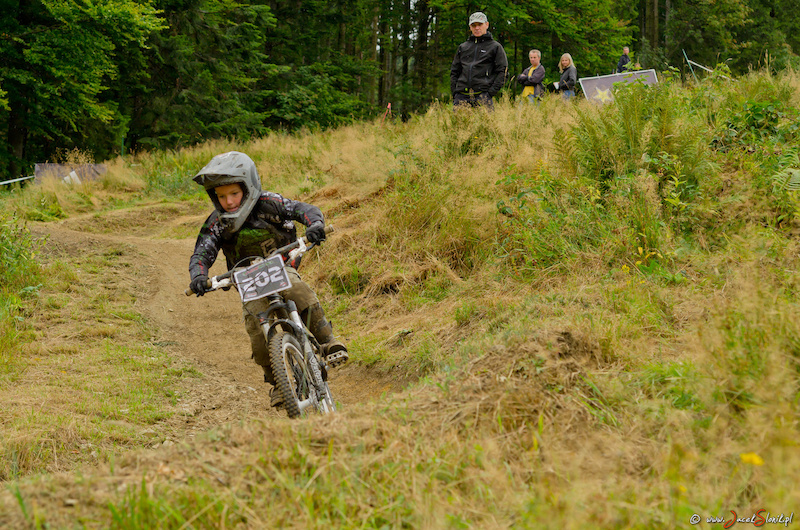 Level went up also among older tigers because time differences between them significantly decreased. Surprisingly one of the favorites - Oliver Gombik Gombala came in third place, after Igor iGEE Wypiór, returning to the game after an injury and Kriss Kaczmarczyk appeared the fastest racer in the forst run. 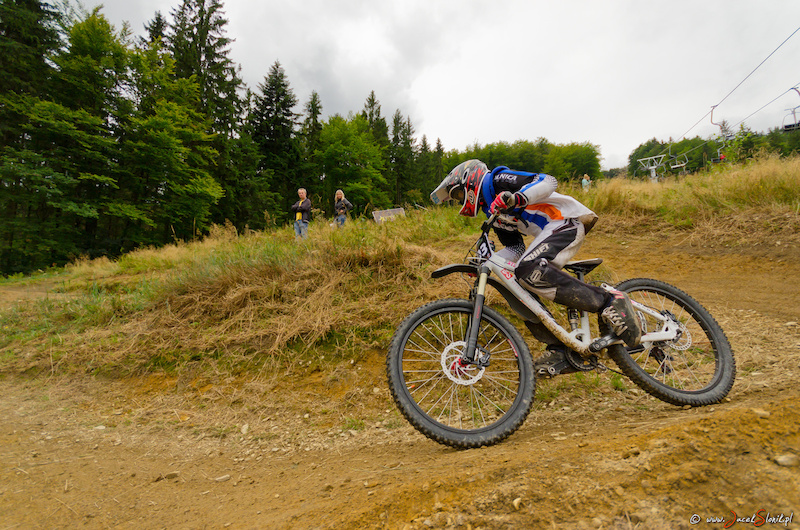 In the second run Gombik put everything on one card, but still his score was three seconds worse than the one belonging to Kriss. As Gombik's time was better than iGEE’s result in the first run, iGEE had to improve himself to defend his second position. Nothing happened like this so iGEE fallen to the third position. 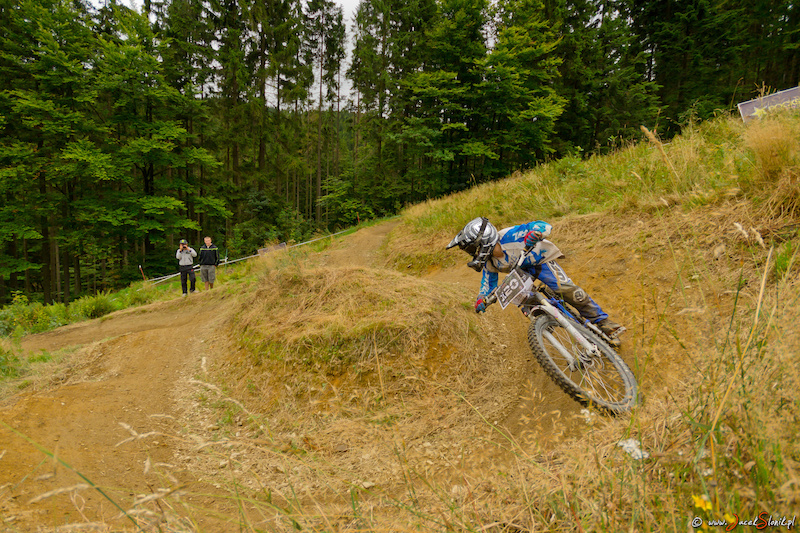 In effect Kriss defended his first position despite he crushed in the second run and appeared on the finish line with the worst time among these three competitors (in the Gnomes Cup we consider the best result of the first or second run). 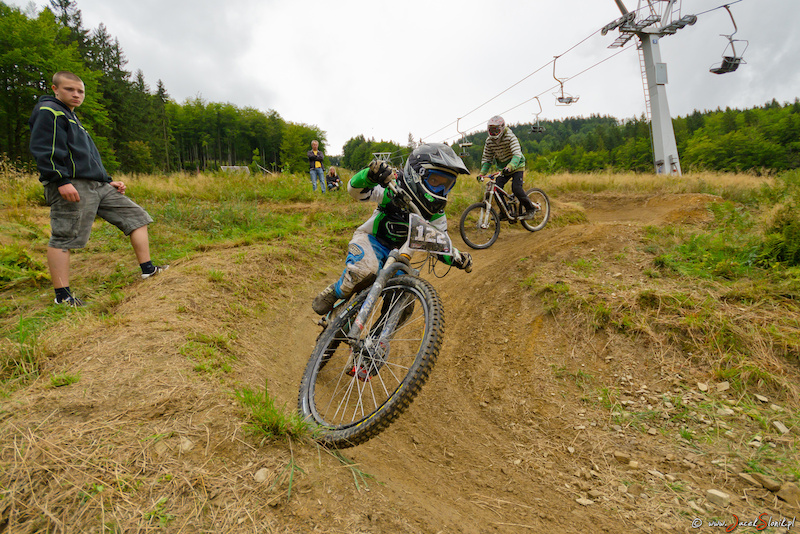 What was interesting, Kriss’s time of the first run would give him a fifth place in the category of the oldest dudes while in the open classification in Kluszkowce Kriss had the third place and fourth in Bachledova Valley. It seems, however, that the reason is not attributable to Kriss, but we can observe growing skill of the oldest Gnomes, especially in case of Kuba Koniuszewski. 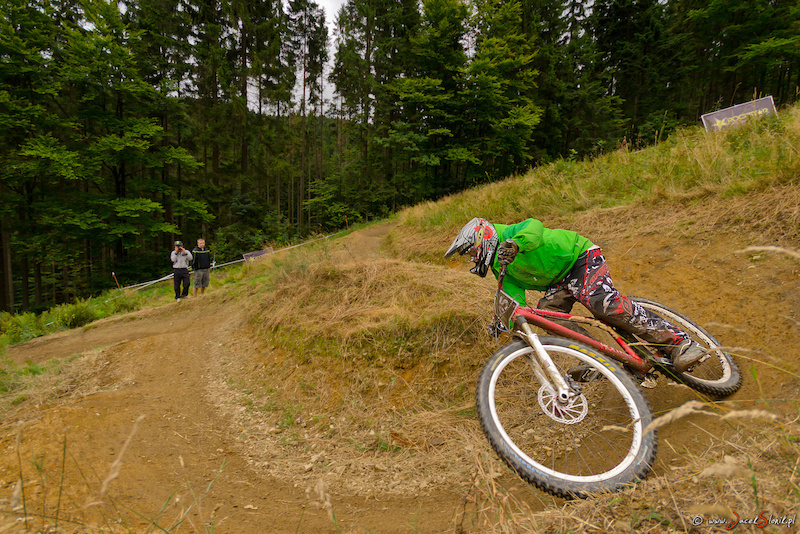 “Koniu” (“horse” in Polish) knocked out his competitors in a better style than Laura did the same with girls and thus deserved a new nickname: "Look at the time". 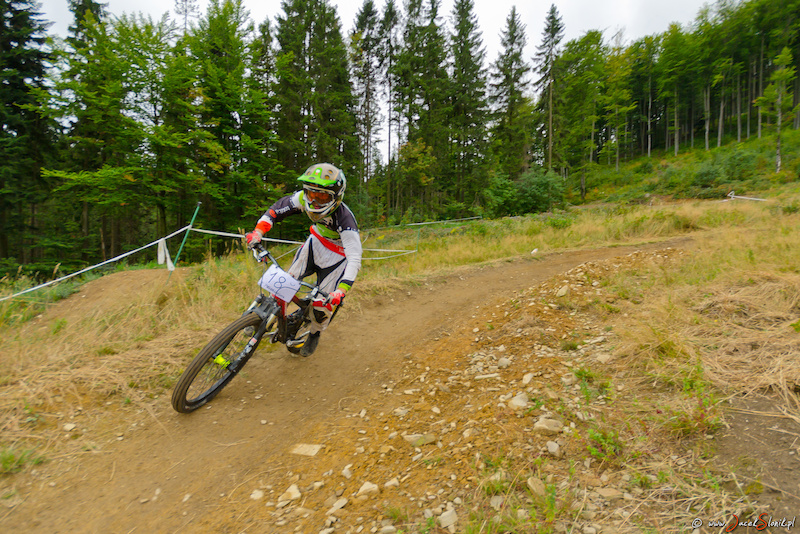 In both runs only much older guys from the bike camp, which was organized by Totalbikes in a time of the challenge, were able to stay in touch with him, while the second place in Kuba’s category was taken by Filippo Rawicki with a time several seconds worse. 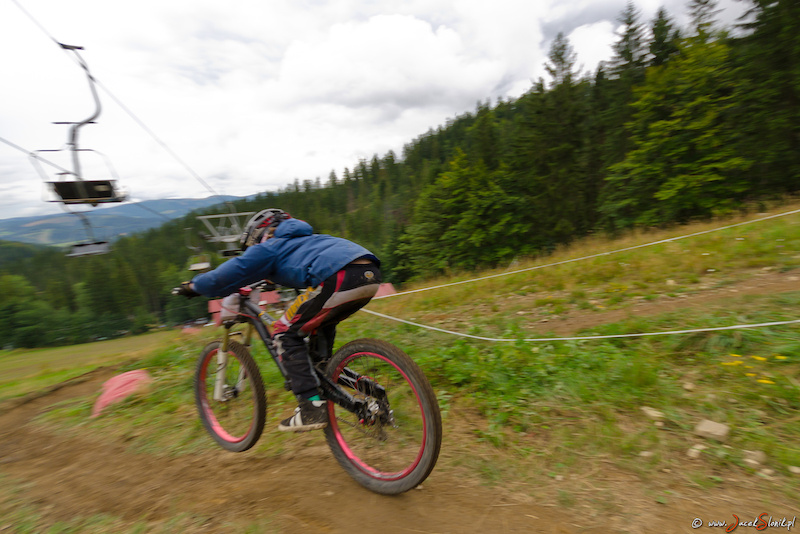 The third place was finally taken by Kuba Kobiela, who took over the bronze medal from David Ciućka (who was the third after the first run). It should be noted that while the majority took the easiest or easier line Kuba “Look at the time” Koniuszewski and other top riders from the oldest category went the sick line from the top to the bottom, among others on slippery traverses. They showed that if you went "as on the dry", this significantly shorter trail would favor the rider. 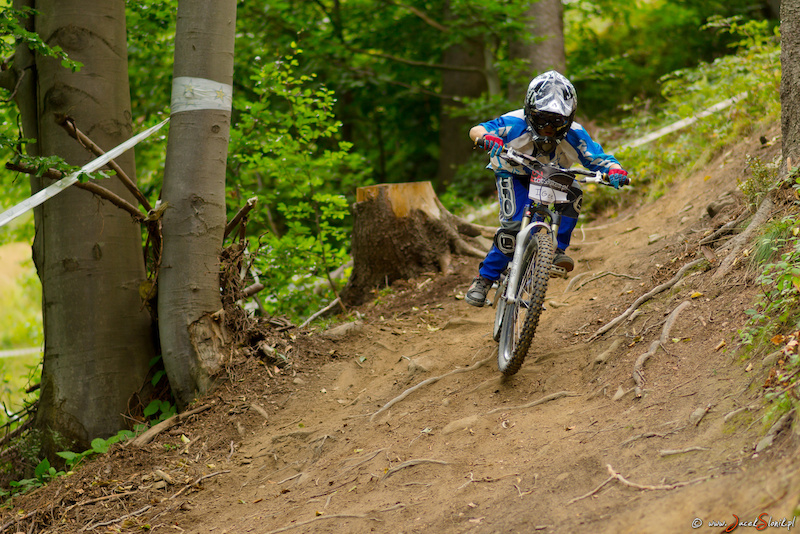 I am not going to describe how I packed the circus in mud and rain and how in the same mud and rain I collected belongings of Wypiór(PL)TON team, which spent the whole week in this place during the wonderful Totalbikes bike camp. I am too tired to recall this wet, dirty and tiring time. However if I was not tired I could not leave this place I’ve been living in for the last seven days. 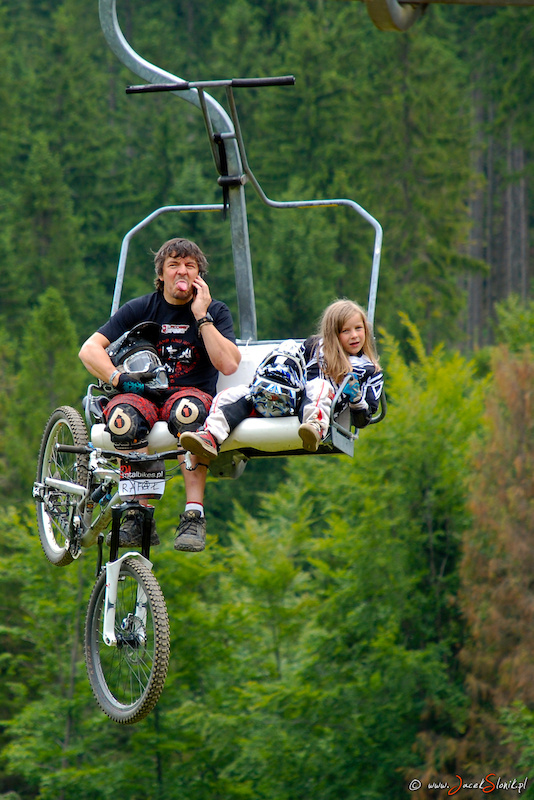