The Gnomes in Bachledova Valey - face it & bike it

Jun 24, 2012 at 15:08
by Frower Power
Tweet
Until recently, for most of us, including neighbors from the South, a bike park in Bachledova Valley was only a virtual spot, recommended by Filip Polc, we could watch on the facebook and “like it”. 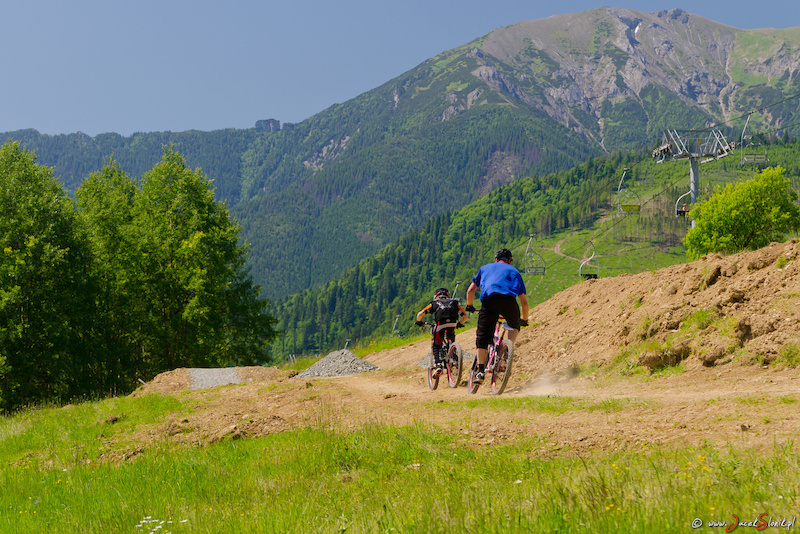 Until recently, at least until the Gnomes Cup was organized, our children could face downhill only through a screen. Last weekend we brought back the original meaning: "to face something" because we faced in the real world one of the downhill trails of Bachledova Valley and replaced "like it" by "bike it". 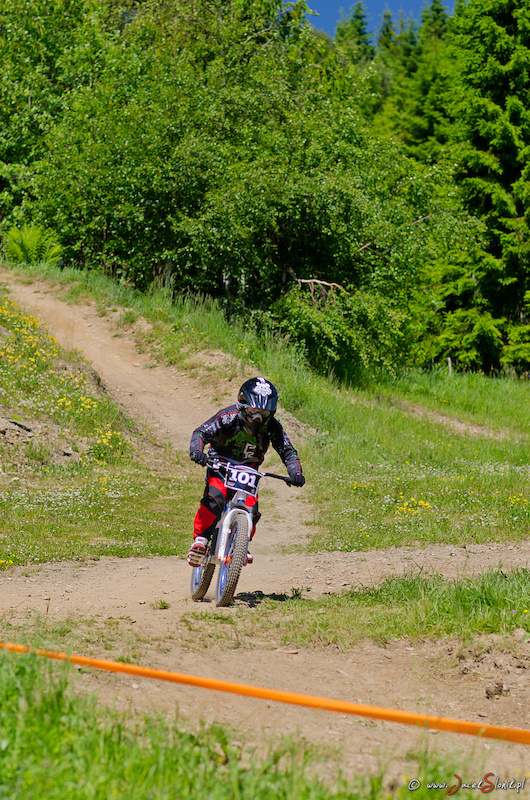 Therefore anyone who came to the second round of the Gnomes Cup deserved our t-shirt that immortalized the epochal event when 49 kids were taken from the computer. And you need to know that among those 49 young explorers of the old world there were nearly twenty representatives of Slovakia and Czech Republic, and every face shared the joy coming from the cycling adventure. 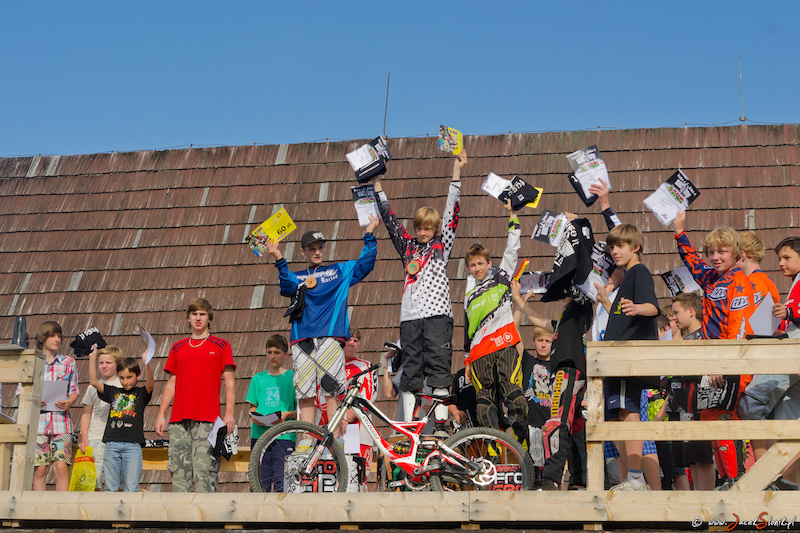 The second round of the Gnomes Cup was surprising on every step. The greatest surprise was provided by girls. So far the smallest crew was represented by seven girls and each of them was strongly determined to stand on the dais. 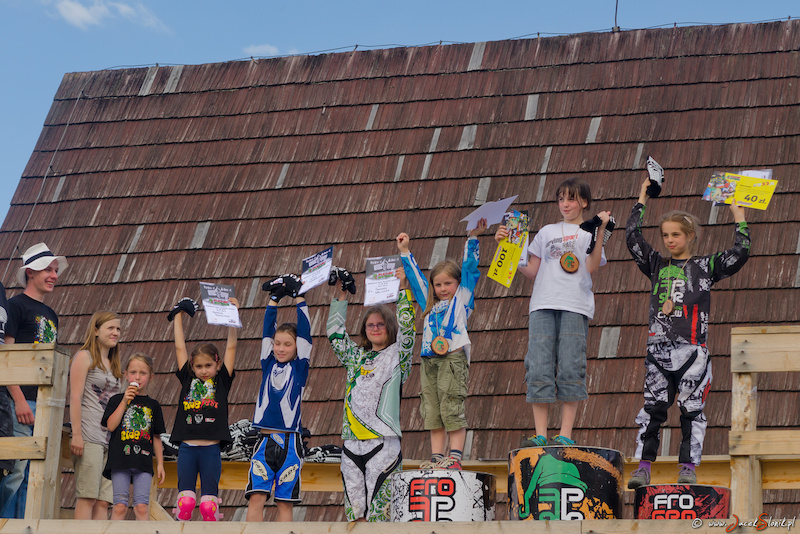 Inka Januła, who at Kluszkowce had announced to struggle for the position held until now by Marta maRACH Wypiór, did not disappoint, although run of five-year-younger maRACH (only 7-year-old) took her only one second longer. On the third place jumped surprisingly Martyna Darcy Czerniak as she had been only the fifth after the first run. In effect she took over the bronze medal from Emanuela Emi Waliczek, who was almost certain of her position on the dais. On the fifth place debuted Vilma Gombalowa - 11-year-old sister of Gombik, who, as we remember, dominated almost all the gnomes at Kluszkowce with the second time in the overall classification. 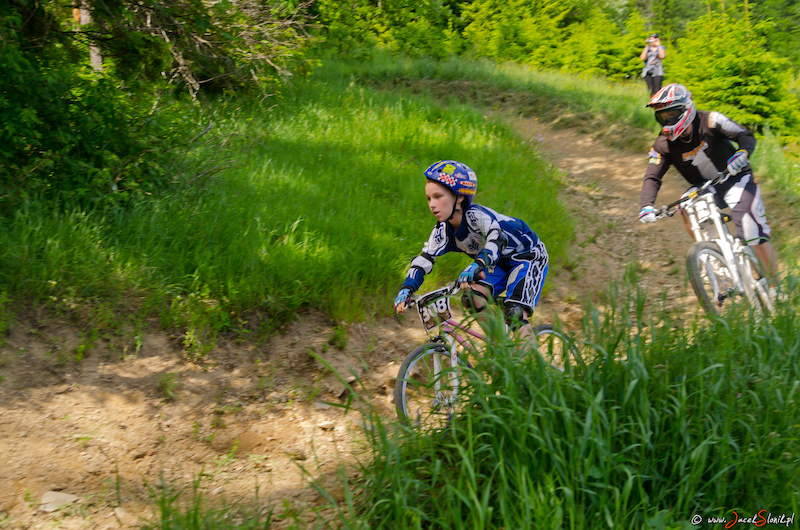 Speaking of domination, in Bachledova Mikołaj Mayki Zychowicz kept oppressing the youngest boys. Nothing to say more than that the second time in this category was more than one minute worse. 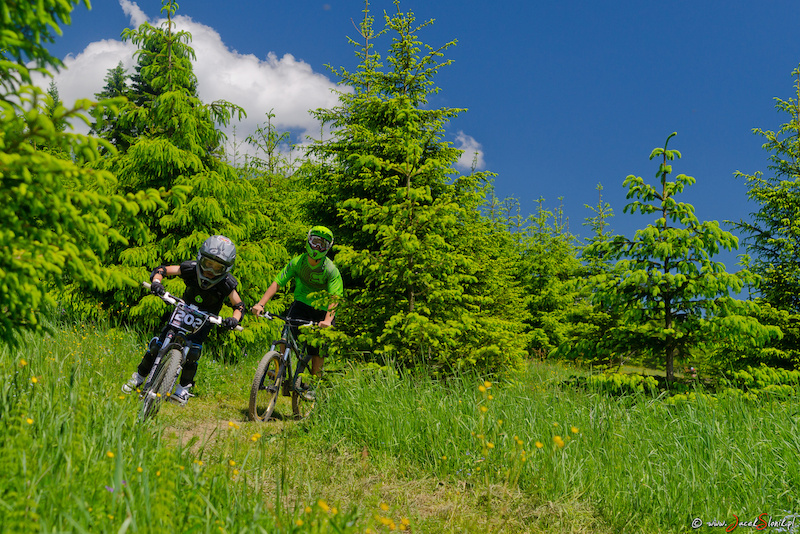 It belonged to Adik Skórczyński, who also was unforgiving to other three competitors, including a vendetta's victim - 4-year-old Mayki’s brother – Łukasz Zychowicz. By the way Łukasz was regularly riding his bike from start to finish but what is more he did it so fast to avoid switching off the light (what is a privilege of the last person leaving the spot). Anyhow we wonder if Łukasz could reach the switch at all. 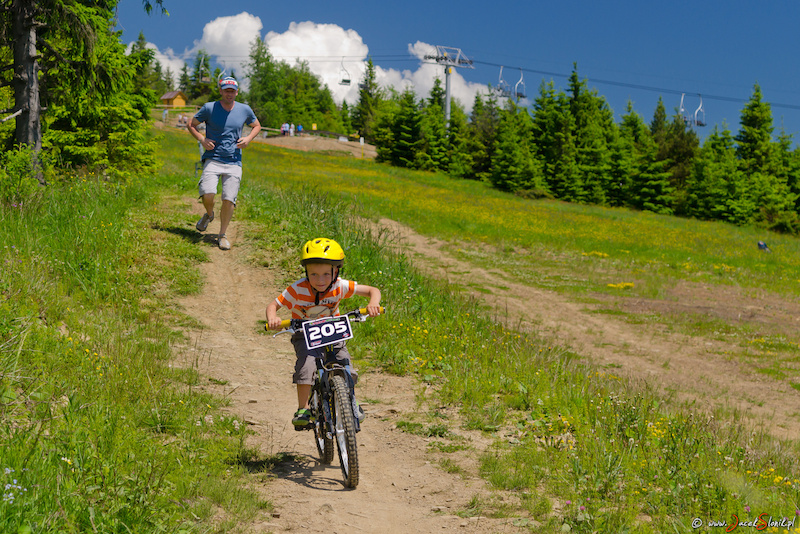 In the next boy's category we were prepared for Kriss Kaczmarczyk’s struggle for revenge on Oliver Gombik Gombala who won in the first round at Kluszkowce. And he succeed this time with a score better for a whole two seconds. 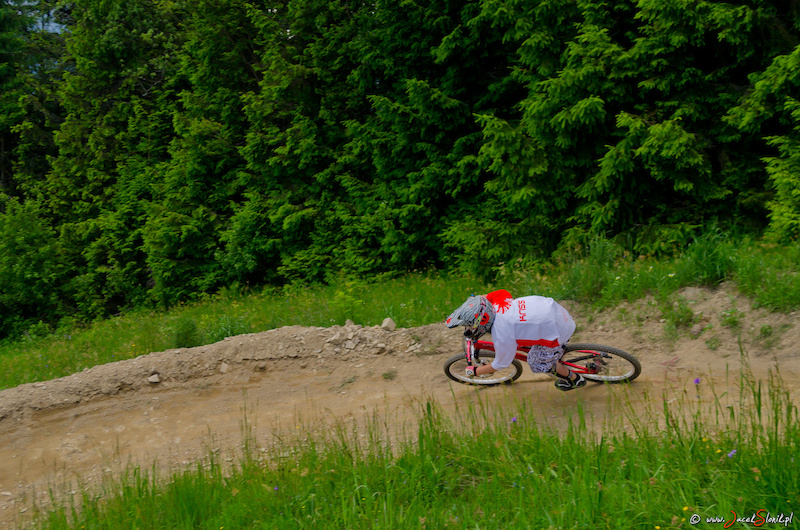 Honestly saying Gombik had only one chance to fight for the top position as in the first run he was stopped by another rider lying on the track. 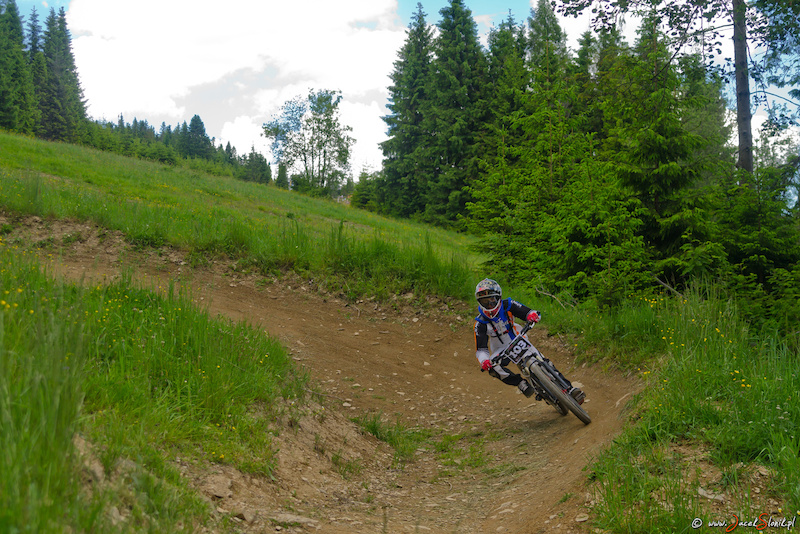 Anyhow both boys with their scores were ranked very high in the overall competition – Kriss on the fourth and Gombik on the sixth position. Coming back to the middle-age-boy category we were surprised by Peter Andrasko finishing on the third place. After the first run he was only the sixth with almost 90-second loss to the leader and in the final he reduced the loss to ... seven seconds. 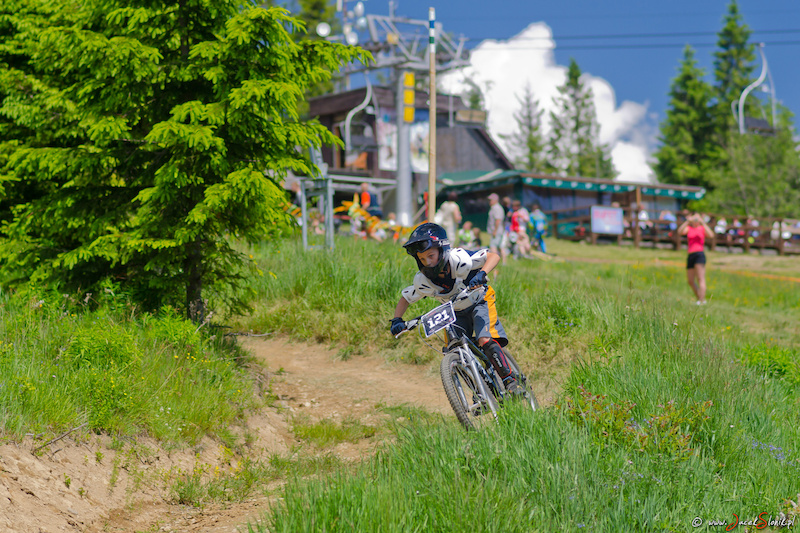 Observing this progress we wished Igor iGEE Wypiór was here. Unfortunately he injured himself the week before in the course of Moravian-Slovak DH Cup in Kouty. Otherwise the zone around the dais would be much more crowded. 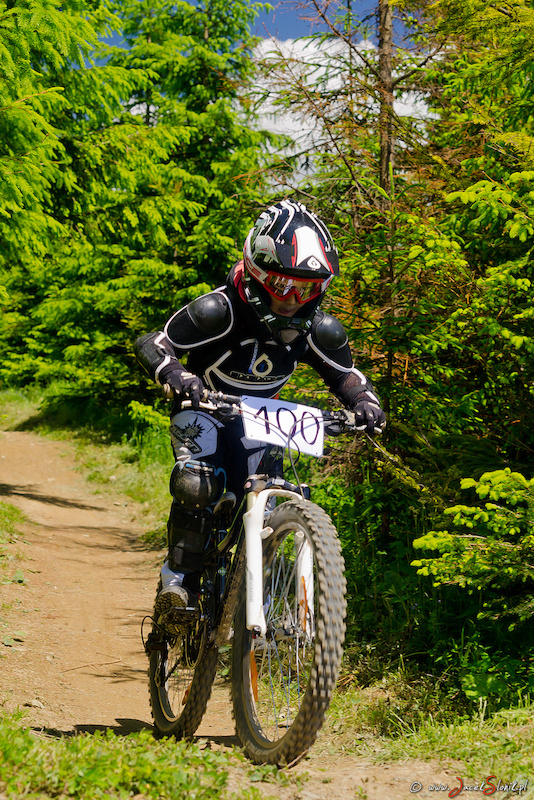 In the oldest category David Ciućka repeated Peter’s trick. After the first run he was only the sixth with a time worse for 16 seconds than a score of Jakub Gorecki leading after the first run before Kuba Koniu Koniuszewski and Filip FilipPo Rawicki. 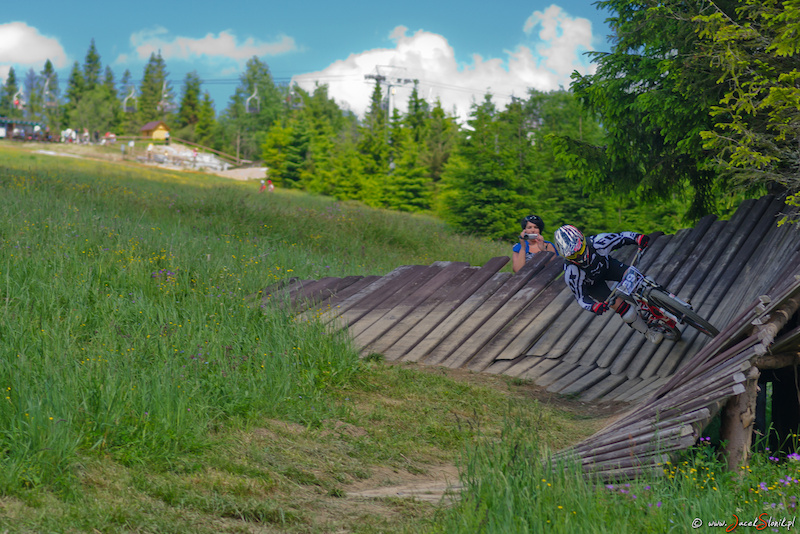 In the second run Ciućka surprisingly established a time aspiring to be the best one - whole four seconds better than the previous result of Jakub Gorecki. Neither FilipPo nor Koniu were able to beat Ciućka and when it seemed Ciućka had the time of a day Jakub Gorecki appeared on the finish line with a score better for one second. 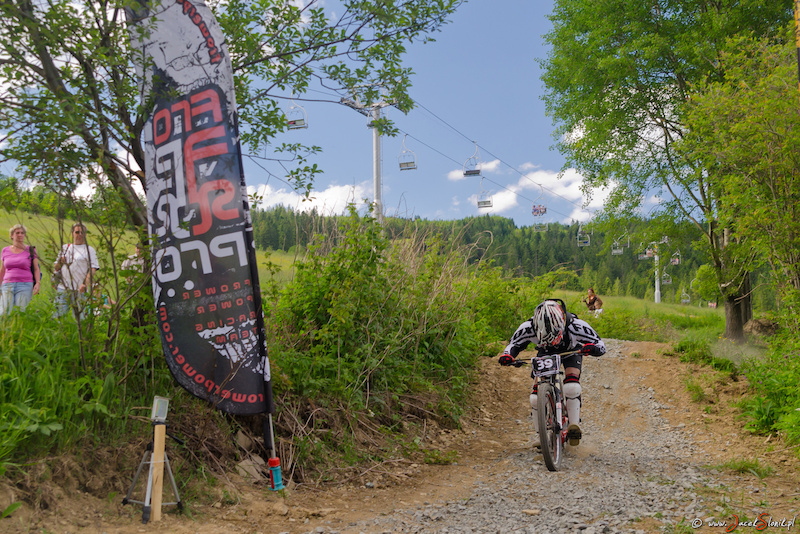 In effect Ciućka fell down on the second position. And while Kuba Koniuszewski defended the medal (bronze) position FilipPo had to get satisfaction from TOP 5 membership as Filp Palko, who was the third in the last round of the Moravian-Slovak DH Cup in Kouty, impacted between them two. 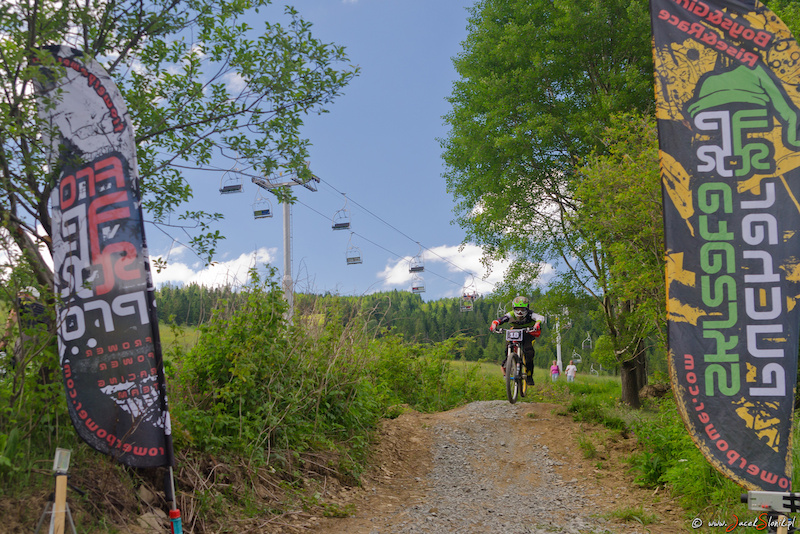