Apr 5, 2012 at 11:13
by Ian Hylands
Share
Tweet
Despite having shot a day and a half of practice on the slopestyle course and having already seen all the riders practice their tricks, I was still blown away by what happened tonight at the Teva Slopestyle and Best Trick finals.

Once again the weather was absolutely perfect – blue skies and not a breath of wind. I turned up around 5pm to shoot the final hour or so of practice before the finals started.

Right from the start of this final practice session, even before the big crowds turned out, the riders were buzzing and the atmosphere was electric.

The boys had the course groomed to perfection ready for today's practice session.

What impressed me most I guess was how all the young Kiwi riders stepped up their riding to the next level today. I had expected Sam Dueck and Benny Phillips to dominate and thought the other riders might not be able to even come close to them, but boy was I wrong. Benny and Sam rode super-strong and threw down some big tricks but young Kiwi riders like Lewis Jones, Elmo Cotter and Phil McLean were right up there with them all night and attempted and pulled off tricks they’d never even landed on dirt before. I think it was Lewis Jones who had never pulled a back-flip off on dirt before, but he chose tonight and the most monstrous wood-to-dirt booter to attempt it on. At night and under lights too! Anyway, despite never having landed one on dirt before he pulled off his first backy smooth as silk and was throwing them down, progressively larger I might add, all night long after that.

Sam Dueck, tail-whip on the final trick-booter and Local (Wanaka) lad Elmo Cotter, no foot can at the 2012 Queenstown Bike Festival Teva Slopestyle. 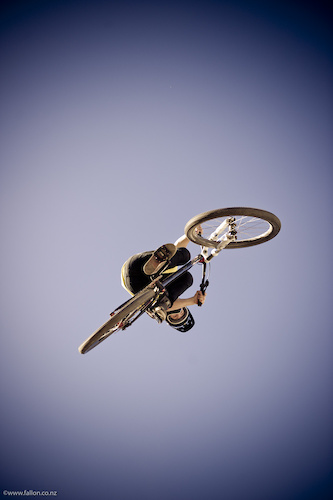 Lewis Jones, no foot can onto the fruit-bowl

Part time local, Kiwi Pete Miller with a x-up onto the fruit bowl

Reon Boe enjoying himself at the 2012 Queenstown Bike Festival Teva Slopestyle. (Reon is a local downhiller who hasn't jumped his bike for months. The morning before the first day of practice he went down to the local Gorge Road jump park to "remember how to jump". This guy is ridiculously talented.)

Phil McLean was also on fire and was attempting double tail-whips on the trick booter. He didn't quite land them but he was rolling away from the landing and I reckon it won’t be long before he’ll be able to pull them off all day long no bother at all. Local (ish – he lives an hour from Queenstown) lad Elmo Cotter was also looking super stylish all night and pulled off some super smooth and slow corked back-flips amongst a host of other tricks. Local ripper (and part of the Wakatipu Shore crew) Conor MacFarlane was also dominating – he was one of the only kiwis to tail-whip the start-ramp step down I believe, and was pulling tech tricks left right and center.

Conor MacFarlane, back flip no hander, and Reon Boe, no foot can in finals at the 2012 Queenstown Bike Festival Teva Slopestyle

Lewis Jones, no foot can


Sam Dueck gets some cash and high fives for a massive tail-whip on the final trick booter, while McGazza gets some cash after stacking trying to do the same thing, and Paul Langland wins some cash for his backflip turn down and Kiwi ripper Lewis Jones scores some cash for pulling his first ever backflip on dirt at the 2012 Queenstown Bike Festival Teva Slopestyle

But anyway, I can't do justice to every rider and every trick or I'll be here all night... Kiwi BMXer Paul Langlands won best trick by throwing a trick that no-one else has ever done and I don't even know what it's called. I had to look it up and apparently it's called "the crondog". It's a 360 body rotation around the bike - with one hand off for a bit of added challenge. Wrap your brain around that one!

In the amateur category Chris Purdie was first, Will Guthrie was second and Mitch Scammell was third.

Anyway, it’s been a bloody long week and I’m sure I’ve forgotten a few important names and details but that’s the gist of what went down tonight.

The Teva Slopestyle and best trick was a huge success, the crowd loved it, it’s awesome for Queenstown, the media (speaking for myself at least) loved it. But I can’t help but think that the riders loved it more than the rest of us put together –and that to me is the sign of a successful event. For some of these young Kiwi riders this must have been the night of their lives – they got to ride and hang out with some top pros (who were chilled, friendly and super supportive I might add), they got to ride an international standard slopestyle course, they got to throw down in front of a huge and enthusiastic crowd, and they stepped it up to the next level and destroyed the Teva Slopestyle course!! It was awesome to watch.

Words and photos by Patrick Fallon

double2011kid (Apr 5, 2012 at 12:30)
Yeah Queenstown! I'm an expat from nz and I am so glad to see Queenstown getting some recognition for once! Hopefully a FMB or World cup can be held there! Congrats on the great event!

fenrisnz (Apr 5, 2012 at 15:04)
Double2011kid I totally agree - I've been living in QT a long time now and it still blows my mind how much potential the area has got. Potential that, until now, hasn't really been tapped into or got much recognition internationally. In the past coupla years though that's been changing and ti's bloody good to see. I would love to see a World Cup or World Champs here - would be nice to have a venue that isn't a 20 minute bus/taxi trip from the main centre for a change! And if they can host a World Champs in Canberra (no hills) I reckon we should be able to pull it off here! And yeah miniman, Lewis Jones is exploding right now!

ragdoll (Apr 8, 2012 at 3:56)
everytime i catch up and ride with Lewis, hes always learnt something new or is going bigger. Hes got a massive future ahead of him. its been awesome to see him grow and progress. So much talent.

d-wojo (Apr 6, 2012 at 1:21)
how big is Kelly mcMASSIVE? the dude is standing on the ground and is still ruling over benny phillips.

space97 (Apr 5, 2012 at 18:28)
I like how the second place amateur is standing in the wrong spot, hes supposed to be on the second highest platform

fenrisnz (Apr 7, 2012 at 2:02)
There were quite a few dudes filming on the night- Jon Television (I think), Diaries Down Under and a host of others. I'm sure there'll be some sick edits coming out in the next few weeks...