Sep 15, 2014 at 20:04
by Ian Hylands
Share
Tweet
65 Comments
If I were to start talking about cyclocross most people would imagine competitors racing in the cold, wet, rain, and snow with crazed fans cheering them on. Las Vegas then probably isn't the first place that comes to mind for a cross race, but over the past few years Cross Vegas has established itself as the season opener of the discipline. And with this growing reputation the race has also attracted more and more top competitors. This year's Elite rider roster almost read like a who's who of the sport, all coming to Sin City to test their mettle on a hot dry course.


For those of you that are still new to the concept of cross, or CX for short, it's basically an event that's a cross between road riding and cross country racing. Competitors race road bikes with knobby tires and cantilever or disk brakes up and down hills and over obstacles including barriers and stairs. The season runs through the fall and winter, often when the streets are too wet and the weather is too cold for traditional road racing. The sport is nothing new, it's been around for over a hundred years, and probably even puts into question the story of the first mountain bike. Think about the fact that over a hundred years ago people raced knobby tired 29ers down gravel roads and through farmers fields, and some of them even had flat bars. It makes for some interesting thoughts... 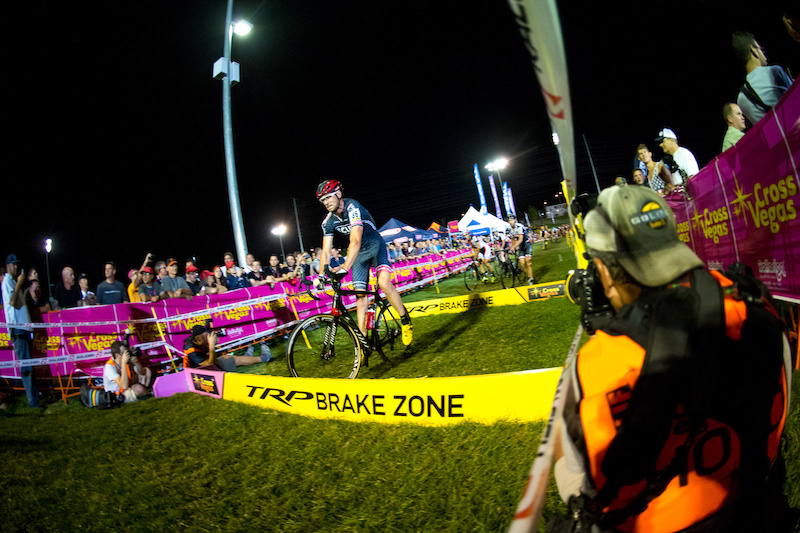 Sometimes things go wrong... Troy Wells of Team CLIF Bar misjudged the spacing on the barriers and didn't get his second bunnyhop in time.

Twallywilly (Sep 16, 2014 at 10:26)
I have done a few USAC Pro MTB races on my single speed and somehow manage to podium in a Pro XCT earlier this year! Truly stoked about those results and I feel like I have a pretty good amount of power in my legs!

Until I raced Cross...

Correction. Until I raced CrossVegas! I was there last week and it was by far the most physically taxing race I've ever done and it was less than an hour long?! My results still sucked by the way. Those guys are on a completely different fitness level than most XC racers out there plus they have the bike handling skills to compete professionally in MTB (Katie Compton made the Pro podium in an Enduro race earlier this summer for those of you who didn't know). Balls to the wall for the entire race with no rest until you either die, pull out of the race, or somehow finish! It is by far the most fun I've ever had while racing even though it's so hard! Beer and cash hand-ups plus heckling for the entire course...sounds like a party!

but i will refrain from slandering such mtb discipline in a negative connotation. maybe the reason i dont care much for it is because it reminds me of road..? who knows.

bkm303 (Sep 16, 2014 at 13:10)
Hell yes!!!! Please continue this coverage all season! Gotta have something to get us through the cold months now that WC mtb is over. Idk about you guys, but I'd much rather read cx race reports than the cookie cutter freeride/trail edits we have to endure all winter.

If I could only have one bike it would probably be my 'cross bike. You can tour, shred singletrack, commute, or go on long road rides, and it does them all pretty well, plus it's super customizable. True all-around machines. Ok, maybe a rigid 29er with off-road drop bars, just so I could fit in some fatter tires. But you get the idea.

Mircea88 (Sep 16, 2014 at 12:54)
I'm sure many of the pinkbike followers who have a hard time accepting XC and xc coverage as a legit mtb branch , will or have already suffered a heart attack seeing CX on the site

OnTheRivet (Sep 16, 2014 at 20:58)
FYI, most of the top Euros (Nys, Stybar, Albert, Muessen etc) were top ranked BMXers when they were younger, Nys was an 8 time national bmx champ so yeah, all these guys have skills. Check the attached pics

Mircea88 (Sep 17, 2014 at 0:59)
Sven nys raced some WC XC races this year, Wildhaber is an enduro rider, Todd Wells also races CXX these days, Zdenek Stybar from OPQS is a succesful roadie ... probably most of the CX riders are also into other types of biking mainly because CX is a filler between the main WC's .

harrisonscottson89 (Sep 17, 2014 at 3:23)
Sven Nys raced the Albstadt World Cup in Germany this year and finished 21st if i remember correctly.

ryan83 (Sep 16, 2014 at 11:43)
Cross is hands-down is one of the best bike-related spectator sports. I don't race anymore (sold my CX bike to build another mountain bike) but everyone should go at least once. There are typically good crashes and you can actually see side-by-side critical moments unfold on the track.

Cool article thanks for adding it. I reallly hope the people throwing beer weren't mountain bikers... We all ride bikes.

Support your local bikeshop...so that they can be complete douches.

bkm303 (Sep 16, 2014 at 13:19)
Hell, most mtbers I know would seriously struggle to bunny over barriers that close together and that tall (if they cleaned them at all). I do a lot of singletrack riding on my cx bike and it's a blast! Takes your bike handling skills to a whole other level.

joeofloath (Sep 16, 2014 at 13:38)
I hit the trail centre on my CX bike last week. Great fun but my tyres weren't inflated enough and every time I landed a jump my rims touched the ground... Definitely the best way to improve your bike handling.

bkm303 (Sep 16, 2014 at 13:45)
Yeah the trails around me are super chunky and rocky, with lots and lots of square edges everywhere. My first time out on the cx bike I flatted 5 times... even after I went tubeless I could feel the rims bottom out pretty often. I never realized what a brute I was being on the mtb just smashing through all that stuff, and having the skinny tires really forces you to be smooth, shift your weight perfectly, and know exactly what's underneath your bike at all times. It's definitely made me smoother on mtb too, and on smooth twisty trails.... I think it might actually be more fun than my mtb. Best of all I can ride to work, ride to the trails after work, shred said trails, and commute home without ever using my car. Huffing my mtb that far on pavement to and from the trails would SUCK, but on the cx it's quick.

Real classy guys. "While a bit of heckling and excitement makes for an interesting race the USA has seen a growing amount of rider abuse from fans. These guys were simply drinking their beers and ringing cowbells, but some fans got a little out of control. While the idea of beer and cash hand ups seems to be a big part of cross racing at the local level, it's actually against the UCI rules, and any rider that even accepts a hand up can be disqualified. And some fans went way beyond offering dollar bills and beers to the racers, spraying beer and throwing other objects at the racers. There were more than a few of the top riders that commented on it, and several expressed that they may not come back because of it. Not cool..."

finnrambo (Sep 16, 2014 at 22:29)
I second drop bars being hard to bunny hop with, I can easily clear barriers on my am/xc bike but it's difficult on a cx bike, and it's a lot easier to screw up on a cx bike which isn't exactly forgiving either. I love cx for all the weird things you have to learn, going foot out in a corner while staying in the saddle is a weird one for sure.

gigerrider (Sep 16, 2014 at 15:39)
I love CX its so much fun and has a great vibe. I ranked just two spots back form Tinker in the world of Endurance MTB but this is a who new world. I missed the wheelers and dealers registration so i did the USAC. We went off at 5pm it had temps near triple digits plus humid as Florida. Did I mention when we stated the gras was about 3 inches long and when we were done 1 inch. We made that course nice and fast for the pros. That being said this was my first Cross Vegas and can't wait to go back again next year. The rowdy crowd is what makes it fun. I wish we had attendance like this for US Cup and State champs.

k2bikeguy (Sep 17, 2014 at 9:24)
This has been fantastic to see a variety of racing coverage on PB this season. The same goes for Red Bull doing an awesome job of covering the whole WC series. It seems like there's more of a 'one big rowdy family' vibe going on and I love it. I really hope that continues in coming seasons. For any haters out there, before you badmouth, try going REALLY fast in one of these other disciplines. I don't mean just ride it, I mean ride it balls to the wall. Riding a bike fast, is still riding a bike fast. I have some freshly bruised ribs from cross to remind me of that.

scotttherider (Sep 16, 2014 at 18:39)
Cross racing was actually the first form of racing I did since BMX when I was like 10. I wasn't bad but man was it tough to go straight all out for 45 minutes straight. Reminds me a lot of short track only with run-ups and barricades to get over...

gordonshred (Sep 17, 2014 at 7:00)
I'm pleasantly surprised by the positive comments here. Honestly thought there would be a tidal wave of negativity.

Deville64 (Sep 17, 2014 at 7:19)
Cyclocross is for bike-sexuals than can't decide which team they are on. Much like a troubled college teen bouncing from men to women. Pick a side!

SangamonTaylor (Sep 16, 2014 at 18:08)
This photo spread puts all the other reporting of Cross Vegas to shame- including the CX specific websites!

zulki-fly (Sep 16, 2014 at 18:43)
Adam Craig is racing everything these days. Good to see him having that shape to join every race. A bonus for Giant having him to race everything from XC, Enduro, and CX.

dadsbudz (Sep 17, 2014 at 20:45)
The only thing worse than racing in cyclocross would be watching everyone carrying their bikes half the time. I don't get it at all

Downhilljoe1 (Sep 16, 2014 at 17:40)
Poor cross racers being offered beer and money and still not happy. please be happy everyone racing bikes at CROSS VEGAS?!

Sanderson22 (Sep 17, 2014 at 6:57)
Awesome to see almost all disciplines of cycling on pinkbike now! Only the largest one is missing...
Below threshold threads are hidden