Firing off the first national of the year in Windrock Tennessee has always been a race to look forward to no matter what season it is. This race brings the best professional and amateur racers around the country in both categories Downhill and Enduro. 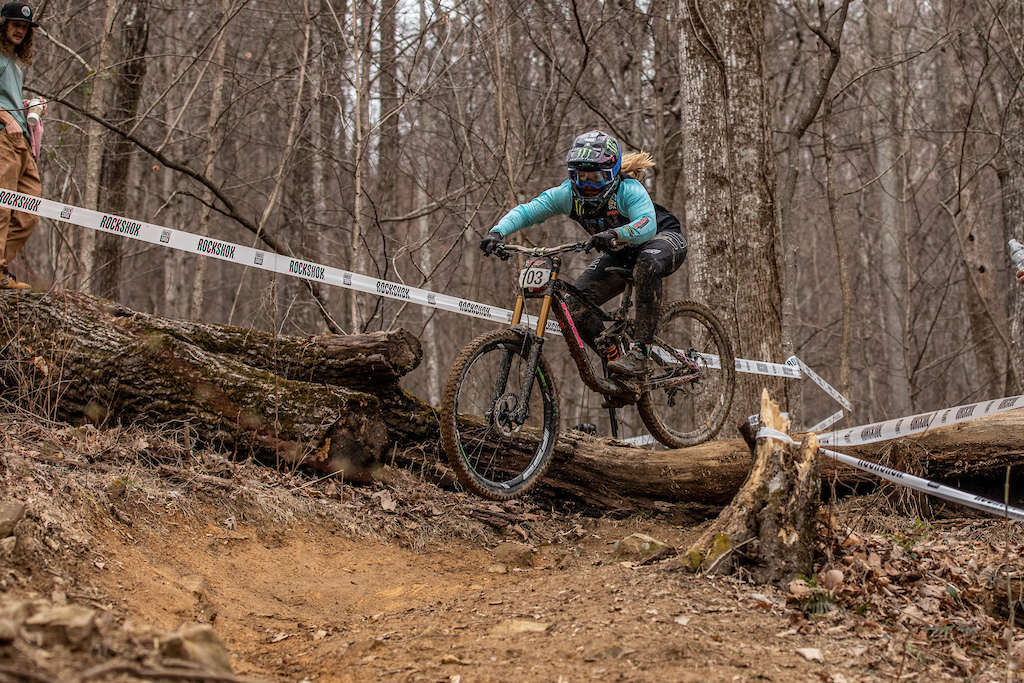 Wednesday would be team pit set up and track walk. Everyone was very excited to see each other from a long winter break of training. The vibes were high, and everyone was wanting to show their skill set of what they have accomplished over the off-season training. 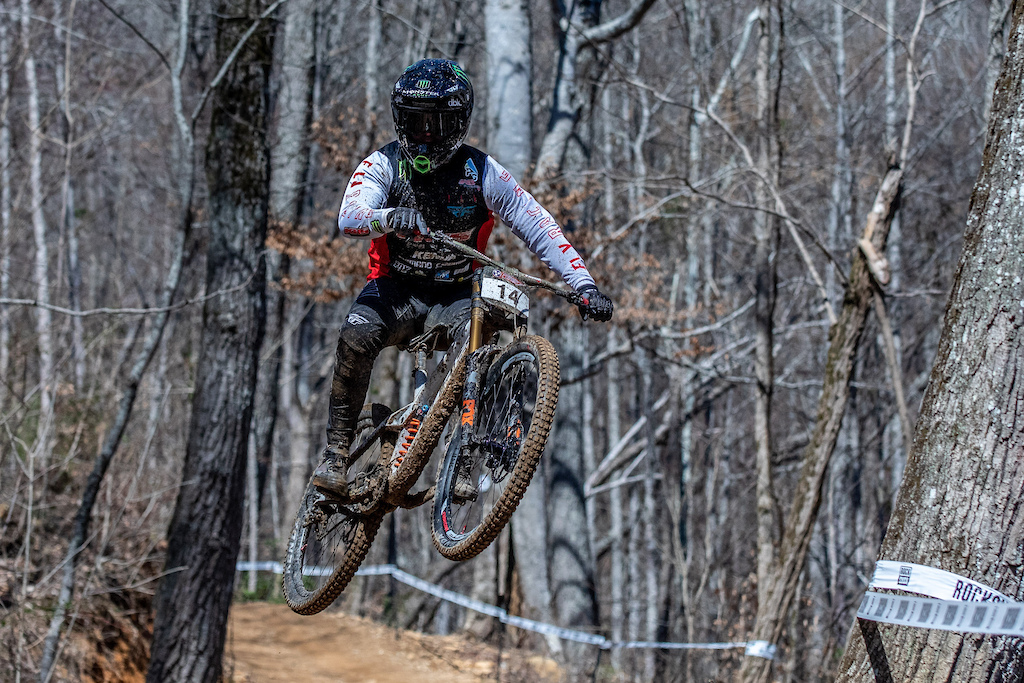 This track is one of the steepest and most technical tracks we have in the United States. It really carries a high stature and is very similar to some World Cup tracks overseas. The entire team would complete the track walk together and everyone was very happy what the Windrock bike park had brought to the table for an amazing track to race on! 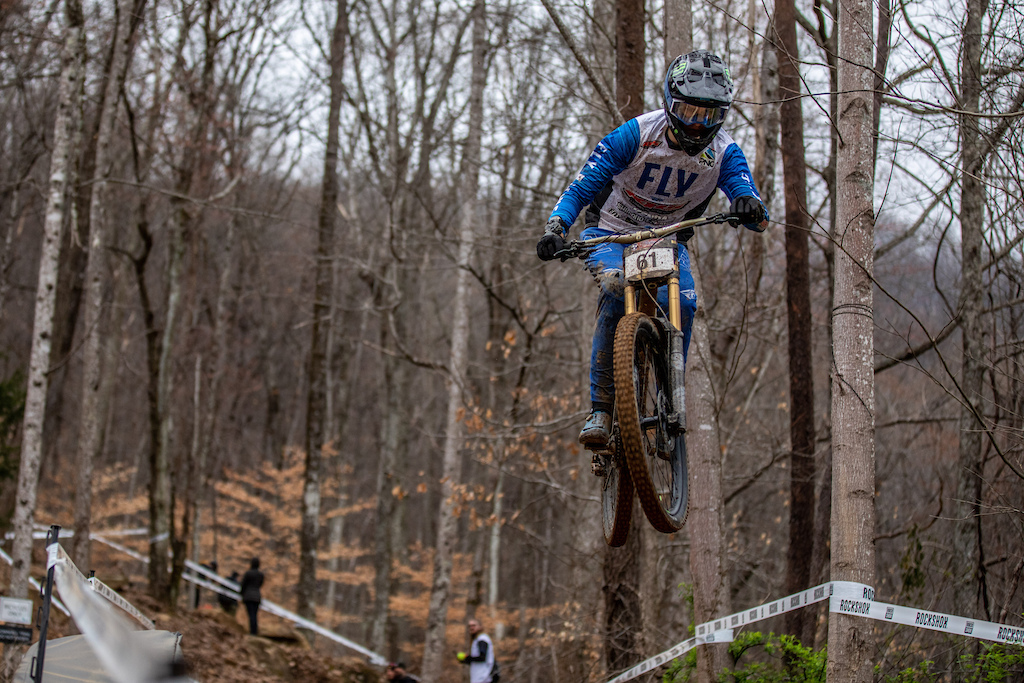 Thursday would consist of all-day training on the downhill bikes, conditions were perfect with weather conditions at 70°F with full sunshine. Everyone on the team was dialing in their lines their bikes and having a good time at the races. Each rider felt very confident going into Friday’s qualifying and was excited to get a timed run under their belt to see where they would sit among all the racers. 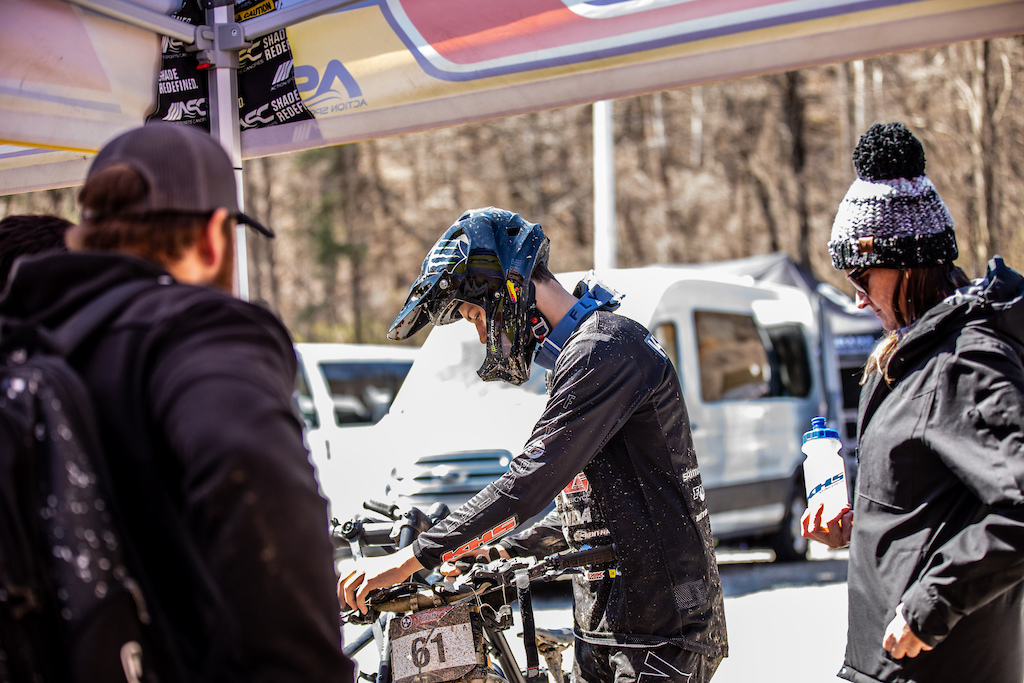 Friday would entail another great day of training and qualifying. It would be Kailey Skelton who would qualify first in the pro women’s category. Steven Walton would have a solid run to qualify him in fifth position in the pro men. Nik Nestoroff would qualify third in the pro men’s and Nate Kitchen would round off in third position in the junior pros. The drama would continue with everyone worrying about the weather that would be coming on Saturday, it was predicted to have a snowfall cyclone that would create over 6 inches of snow. Everyone was very skeptical and didn’t really know what to expect for the finals Saturday. 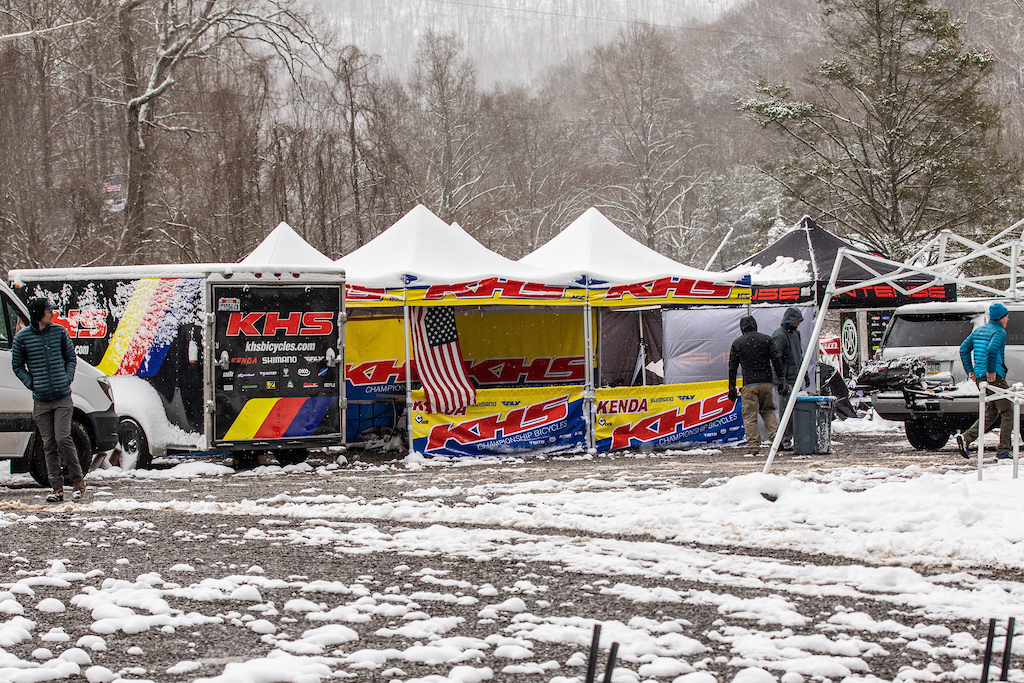 The team would be waking up to over 5 inches of snow which was very similar to waking up to Christmas morning. It was an absolutely unbelievable turn of events that had gone from sunny skies and 70° weather to freezing conditions with over 6 inches of snowfall. After a dramatic morning of everyone wondering if they’re going to be able to race it was unfortunate that the races would be canceled for Saturday’s Downhill final, and they would be taking qualification results. 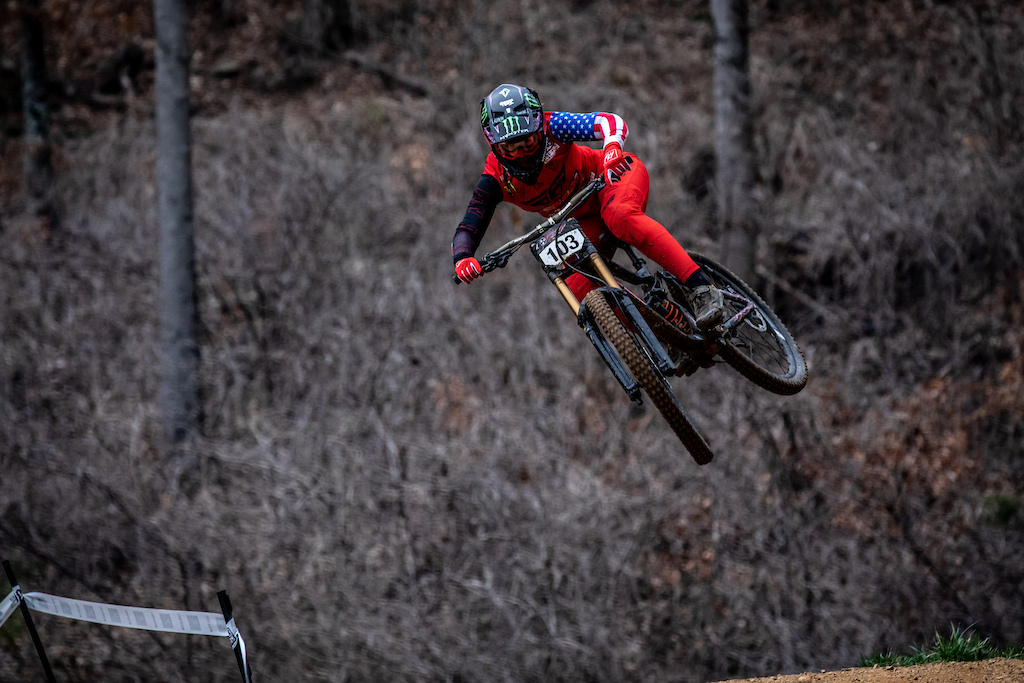 With that decision by the UCI it was still in our great favor that we would come out with a pro women’s win which is absolutely astonishing to start the season off. Both Nik and Steven would claim top-five and top three positions with great points acquired to chase the overall title. It would be Nathan Kitchen who would claim third place in the junior pros men to round out all podium positions for team KHS Pro MTB. 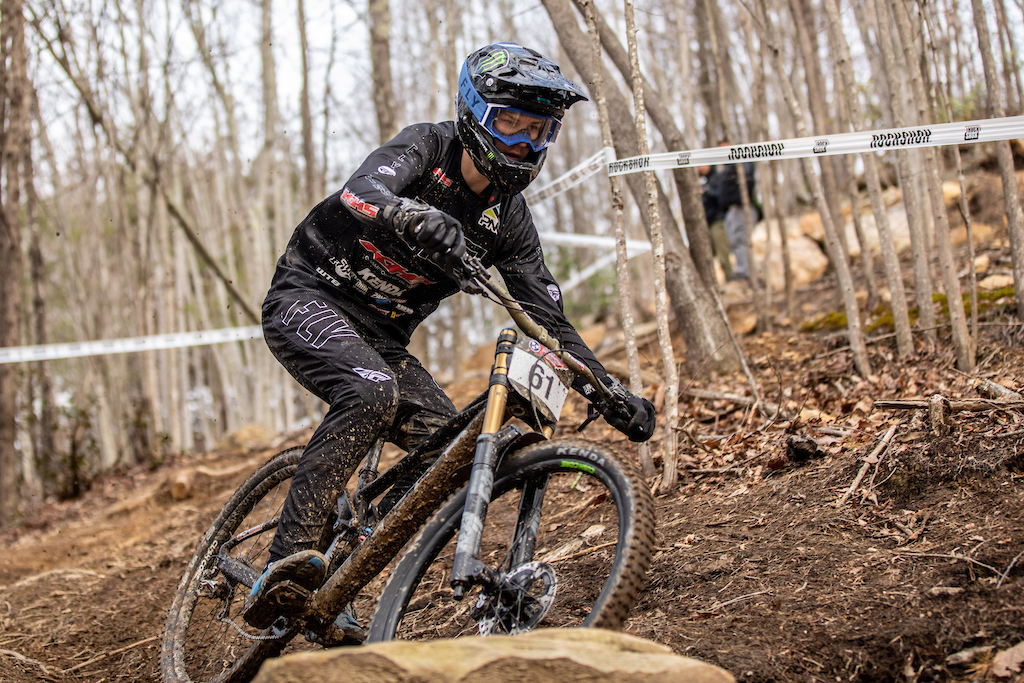 Sunday would be hosting the Enduro event with big names like Richie Rude and Cody Kelley. Some of the fastest Enduro racers in the world would be attending this Sunday’s race. It was definitely going to be a very wet three-stage Enduro race to say the least. Nik Nestoroff would be the only one competing in back-to-back events which is very impressive since he did not have much time to practice all three final Enduro stages.

Nik would accomplish all three stages in the wet and wild to claim his first elite pro Enduro podium sitting in fourth place which was a massive gain of confidence to start off his Enduro season. The overall weekend would intel of one win and six podiums which no other team would be accomplishing. It was an absolutely stellar weekend with great vibes and racing. The team would always like to thank their fans, family and sponsors for all the continuous help. Each rider will take a two-week break to focus back on training and riding and we will all see you at the Sea Otter Classic held in Monterey Bay!

oobaa47 (Mar 18, 2022 at 5:35)
I know its a catalog frame design that they didn't have to spend any R and D on, but it still has to cost decent coin to fund a complete race team all these years.

oobaa47 (Mar 18, 2022 at 5:42)
(not sure what happened to my post)....Don't quite understand KHS. They have zero marketing presence or brand awareness. I had a KHS dh300 bitd, and it was a great bike. Over the years, I've seen exactly one other khs at my local mtn. Is it mostly a west coast brand? To fund a complete race team all these years, and to produce really good edits, has to cost decent coin, yet I can't imagine they have enough significant sales to support these programs.

oobaa47 (Mar 18, 2022 at 9:33)
@preach: Yeah, it wasn't a dig at all. I'm actually impressed that they are able to be so active over the years in the dh and have a full dh race team and program going. I just don't see the brand as a significant player. Maybe it's a loss leader to support other market segments?

blum585 (Mar 18, 2022 at 6:35)
My first 24" Mountain Bike was a late 80's KHS Montana something or another with Suntour components. I guess I'll always wonder where the brand really went also. It's good to see this level of commitment and support for some riders so they can race!

office (Mar 18, 2022 at 19:30)
When I worked at a shop we were a KHS dealer. We stocked a lot of comfort bikes and hybrid neighborhood bikes mostly. Free Agent BMX came from them as well. I would make a ton of sales and my boss didn't care much unless someone unloaded a Specialized Enduro or whatever.

BigballmcCall (Mar 20, 2022 at 20:17)
It’s designed to be a warm up race before the World Cup season starts. Normally mid March is about perfect for a race in East Tennessee.