by LooseRiders
Views: 24,572    Faves: 670    Comments: 31
Its great to see new and unknown riders get the recognition they deserve. Case in point: Englishman Joel Anderson who hucked himself onto the internet and into the consciousness of riders all over the world with his wild edit, 'F*ck You, Get Pumped!'. None more so than the team behind apparel brand Loose Riders, who have recently signed him to their team. With more edits on the horizon, we (Pinkbike) wanted to find out a bit more about who this young upstart is and what makes him tick...

So who is Joel Anderson?

I’m a 19-year old kid from the South West of England and the little known location of Triscombe, home to the best trails in the UK! Slaying corners is the name of the game, but sometimes you just gotta throw in a cheeky backflip haven’t you?

How long have you been riding and what got you into bikes?

Just like every other kid, I learned to ride a bike at a young age and obviously enjoyed the freedom that a bike brings. That and going on rides with my big brother and my dad until one day we came across Triscombe, back in the days when there was only one downhill track and a range of fast rolling fire roads.

Riding my 24” Kona Stuff hardtail, we kept returning to the valley, time after time to get our fill. My parents, to which I owe all my achievements, sold our house and noticed one of the houses nearby was up for sale and after many days begging them to buy it, we got it. The six weeks holiday I had off school that year, I spent every single day pushing up that hill and riding the trails leading to my garden with the biggest smile on my face and nothing’s changed!

So you where a bit of a DH racer when you were younger – didn’t you have a spate of injuries?

At the tender age of 9-years old I competed in my first DH race and ten years later, I’d competed in 104 races. As far as injuries go, I’ve broken my collar bones a grand total of 7 times, I also broke arm and of course an infinite amount of winded situations! To be fair, 3 of my broken collarbones weren’t bike related and the others were pretty pathetic crashes ha-ha! 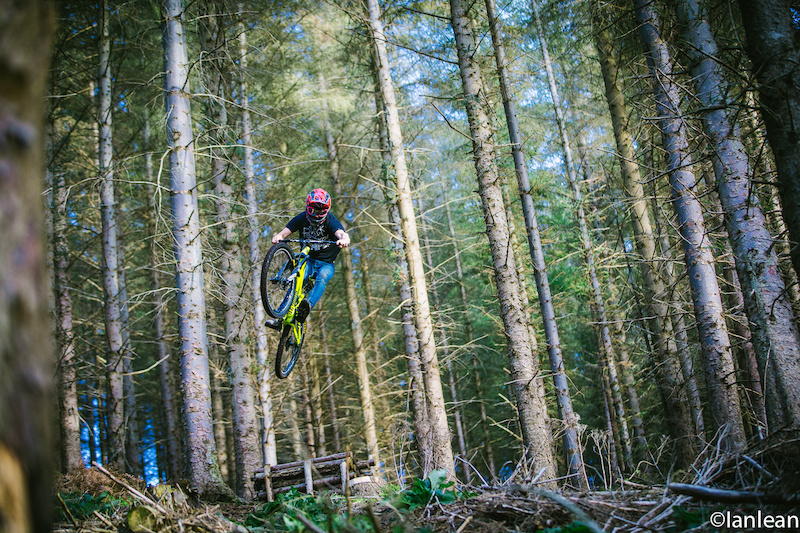 Right at this moment, the bike is crying. It knows a near enough flat landing is on the way.

Did that put you off competing or do you plan to race again?

I’ll be racing again shortly - the injuries haven’t put me off at all. My big brother is at university in old London town and I can never perform at races without him there. Brotherly competitiveness? Perhaps, but it definitely helps.

Lets talk about your ‘local’, which is - pretty much - right behind your house. Do you ever think, “damn, I’m lucky to live here?”

Oh yeah, in the summer especially, which is absolutely ridiculous at my local! There’s no greater moment than waking up to the sun shining in your room with all your friends converging on your house and the smell of bacon. Getting to top of all the trails at Triscombe takes no more than a 15 minutes hike-a-bike from my house or a 5-minute shuttle in my mate, Toby Down’s pickup truck. With over 20 trails, the toughest decision that arises from a day at Triscombe is usually, “what’s next?” I can’t wait for winter to disappear so we can go back to riding till 10pm and rolling down the hill for dinner.

Away from home, where else do you like to ride and where would you like to shred in the near future?

My friends, my brother and myself disappear off to Pila and Morzine for 2 weeks each year, which is never bad - bright sunshine and dust (sometimes) all round. For me though, Whistler is high on the list of places to go and the videos that come out of there are so rad - its just a shame it’s such an expensive trip.

How much of an influence has riding BMX had on the way you now ride your mountain bike?

I think its just helps to maximise your time on 2 wheels and as long as you’re not breaking bones, it can only help. BMX has taught me lots of new ‘crowd pleasers’ for the edits, but more importantly, its built upon my strengths and obviously improved my bike skills. You have no idea how happy it makes you, when you ride up a handrail - it feels like you just ridden up a concrete ramp.

Would you say BMX represents an easier way to improve your skills and how easy is it to transfer between the two?

When the woods are wet, but the sun is shining, the skate park is usually dry. If it’s daylight you can probably ride BMX and without killing yourself, so you can easily build up those ‘bike riding hours’ even if you’re just pumping around a park - it isn’t easy, but at least they’re easier to 360 than a DH bike, ha-ha!

How did your relationship with Wideopenmag come about and what will you be doing for those guys?

My family have known Jamie (Edwards) from Wideopen for a long time now, meeting him at races and uplift days - we’ve always gotten on well. Wideopen approached me with some test bikes to shred, a Kona Operator and a Corsair Konig, which I’ll review and make some “sick edits” with – it’s all a little overwhelming and I don’t think it’s really hit home yet, but everything is positive and everything is splendid at the moment.

Your first edit with Tom (Caldwell) certainly turned heads with its raw nature – what would you say influences your riding?

Yeah, F*ck You, Get Pumped was a lot of fun and people seemed to enjoy it! As far as influence goes? I’d say BMX has definitely introduced me to a world of tricks seldom seen on mountain bikes and I have no idea why? Foot-plants, bomb drop-ins, toboggans, etc. - I just can’t wait to throw even more in in some upcoming videos. I want everyone to know that there’s a huge smile behind my helmet. Caldwell Visuals came and captured what I’ve been learning in the past year and obviously motivated me to pedal harder into the inside of every turn and pull up harder than what would be considered “normal” because after all, who wants to be normal? 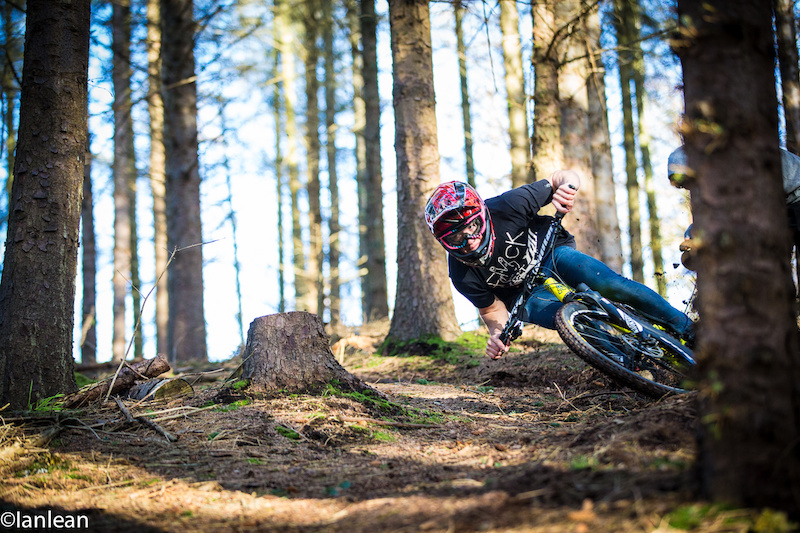 Joel getting tucked and getting low.

And now you’re riding for Looseriders too - will we be seeing more edits dropping over the coming months?

Definitely! Loose Riders are now supporting me as well as Ti Springs, which is perfect! They both help me and my bikes to look smart - I’ve just gotta live up to the name and get ‘loose’ now!

Who would you say has influenced your riding the most and in what way?

It has to be my big brother and the friends that surround me - just disappearing off into the woods for a day digging or riding stuff that scares you. Nothing’s more exciting than throwing yourself into a situation and trying to sort it out in a split second. You can sit on the sidelines all day contemplating about trying a trick or hitting a jump or you can just give it a go, then you really know if you can do it. Or not? 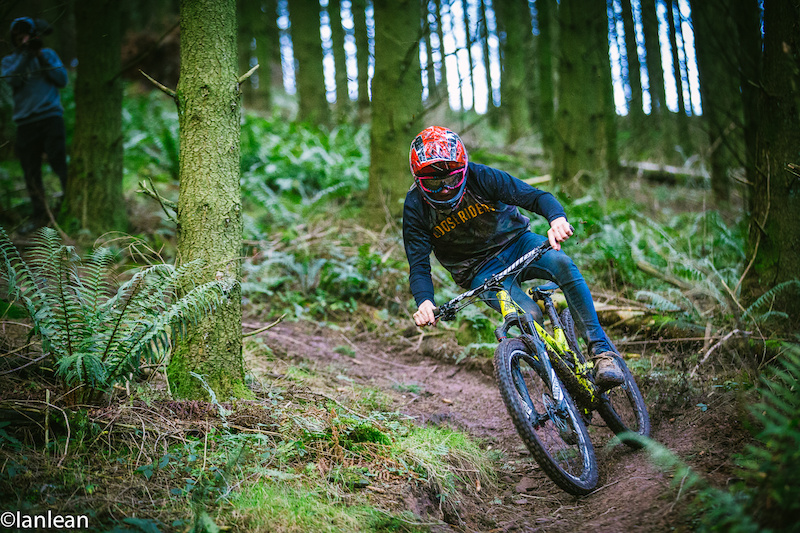 Looking ahead, where do you want to take your riding and do you have any goals or aspirations?

Gotta be the FEST Series! Those boys are pushing the boundaries of what’s possible and I wanna be there, chucking big whips and over-clearing the world’s biggest set of jumps. For the moment, I’m just riding at home, perfecting tricks and trying to build a 27-metre long jump with a shovel and a mattock.

Away from bikes, digging sick trails and making edits, what else does Joel Anderson get up to?

Living the dream! I bought an old BMW E30 for £100 and made it road legal - once I have some insurance (which will be difficult), the edits will get a more interesting. When it’s warm enough, we go out in the speedboat for some wakeboarding and donut towing - turns out that going 40mph off the back of a boat and hitting waves is pretty scary! Sometimes we take our mates’ go-karts down to a little bit of wasteland near our local town and throw some drifts, failing that, I just take my BMX and go shred!

Thanks for taking the time to answer these questions Joel. Any shout outs?

First of all I’d like to thank all the kind racers who’ve put my bike on the back of uplift trailers at races over the years when I was too small to reach! I’d also like to thank Wideopen Mag, Loose Riders, Ti Springs, my big brother Isaac and my parents and friends for their continued support, I owe it all to you!

pimpin-gimp (Dec 21, 2015 at 10:13)
The best bit is he isn't even the coolest in his family, his dad runs the uplift at triscombe which he started to help his kids out, and his mum makes badass mince pies for those on the uplift. Over all a top class family, and I've not even met the boys!

ompete (Dec 21, 2015 at 6:51)
He needs to eat more vedge with those bacon butties, if he's broke that many collarbones! great trails at Triscombe and some loose ass riding!

Seven-Second-Betty (Dec 22, 2015 at 7:28)
another banger from @caldwellvisuals ,Joel you beast - dat manual, dat whip to rail between trees, dat all the corners :O