Aug 22, 2013 at 3:15
by Cut Media
Tweet
In anticipation of the official Nukeproof Pulse downhill frame launch at Eurobike 2013, we’re pleased to bring you two video edits which lift the lid on the story of the new bike, from concept to reality.

The eagle eyed amongst you will have noticed that team ChainReactionCycles/Nukeproof were riding the new Pulse at the Val D’Isere World Cup, a bike which has been two years in the making – but improving a frame which is widely regarded as one of the best available hasn’t been an easy task. It’s requires months of planning, design, testing, development, feedback and more testing. This process is little documented and often very secretive, but these edits give you a real insight as to what’s involved in making a World Cup ready downhill race bike.

‘Nukeproof Pulse: Concept to reality’ takes you through the design and prototyping phase of the project, introducing you to the unsung heroes of the bike industry; the engineers and designers that push the boundaries of what’s possible on two wheels. Taking the successful design of the Scalp, the team set to work on making its evolution a stiffer, lighter more functional product.

Nukeproof Pulse: Concept to reality from Nukeproof on Vimeo.

The second edit, ‘Nukeproof Pulse: Testing and development’, illustrates the vital role that quality real-world testing in the harshest of conditions plays. Nukeproof have some of the best test pilots to call on from the ChainReactionCycles/Nukeproof race team who help validate lab testing results and provide valuable feedback on the feel of the bike and suspension settings. This feedback is used to make final tweaks to the design and specs of the bikes before drawings are signed off and the frames go in to production. 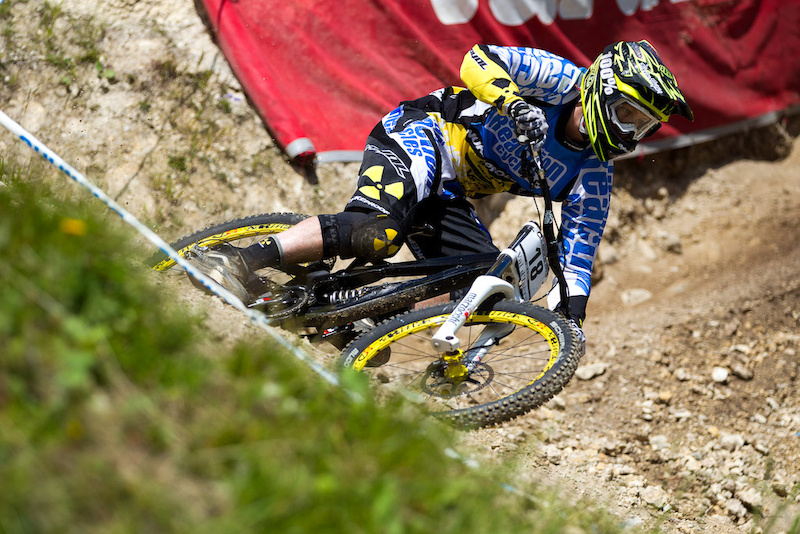 The all new 2013 Nukeproof Pulse will officially be launched at Eurobike 2012 on Wednesday 29th August. Details of the new bike can be found below.

The evolution of our highly regarded Nukeproof Scalp, the Pulse is the product of two seasons of tweaking, tuning, testing and valuable rider input from Team CRC/Nukeproof. The outcome? A premium performance frame which combines updated geometry and enhanced design features for a hugely improved ride dynamic, ready to take on the best in the world.
The Pulse is a pure-bred race animal with superb durability and an instinct for winning firmly planted in its DNA. Built using T6 6061 aluminium with custom triple butted hydroformed tubing for a perfectly balanced strength to weight combination, the Pulse also boasts an adjustable chainstay option courtesy of our ‘Style Fit’ system. Whatever the hill throws at you, we have the weapon to match it – allowing you to alter the wheelbase by 10mm depending on the type of track you’re riding, your height or riding style (long setting = 445mm, short setting = 435mm). This bike will perform above and beyond your expectations on any terrain.
It’s all about the detail

Our engineers designed the Pulse with a view to improving every individual part, from tubing and bearings to cable guides and pinch bolts refining each one as they went. Working alongside our Team Mechanics, we’ve made the Pulse not only functional and dependable from a rider’s perspective, but we’ve designed it specifically to be easily serviceable, with improved bolt and shock access too.

The details in the ride

At the beating heart of the Pulse is an instinctive platform that’s been fine-tuned to take on the world’s highest, fastest, steepest and most gnarly trails – pushing you to ride on the edge of what’s possible. We’ve refined the linkage to increase stiffness, resulting in a more stable bike and a smoother suspension feel throughout the stroke of the shock. We’ve also slimmed down the swingarm significantly, minimising the unsprung weight and improving square edge bump compliance without compromising strength. Our Split Forge System allows us to utilise the material properties of the frame to provide a stronger yet lighter yoke while reducing the number of welds, allowing a larger area to disperse any loads and forces applied.