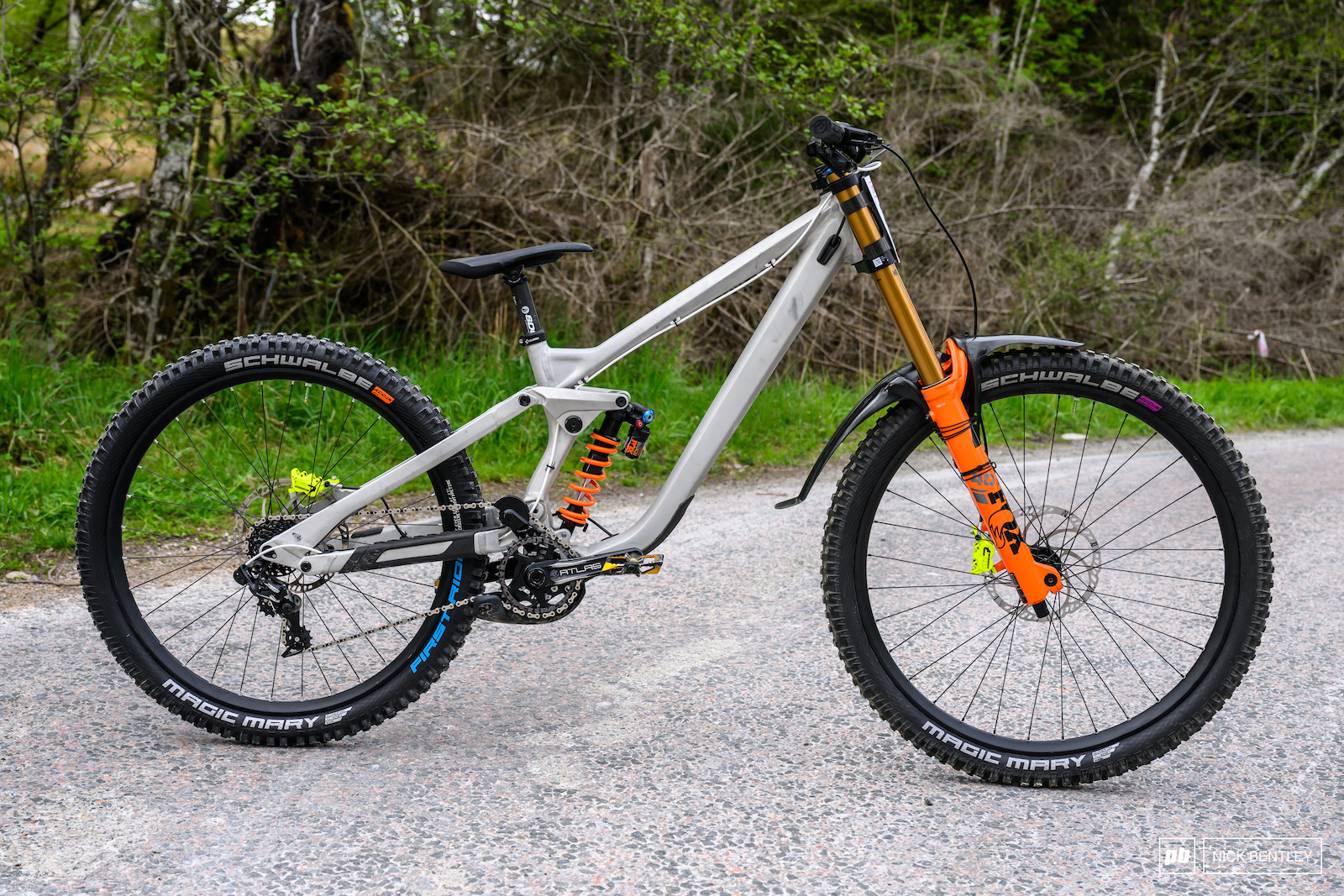 BIKE CHECK
Danny Hart'sCube Two15 Prototype
Photography and Words by Nick Bentley
How could we not stop by Danny Hart's pit at the last round of the UK National Downhill Series at Fort William and take a look at the winning bike? This is the same bike Danny has been riding and testing for a while and we had a quick glimpse of it in the pits at Lourdes.

So let's face it the frame is what you came here to see. The Cube Two15 now has a high Pivot Idler set up. I could not get a lot of detail on the frame itself other than this one is a standard medium size and is pretty close to what we should expect to see in production shortly.

This raw aluminium frame shows a few battle scars and looks to have been put through a lot of testing hours by Danny. The one thing I did notice was that the Idler is fitted via bolts to the frame which should make removal for any maintenance really easy which is a nice touch. There is a mix of external and internal cable routing too, with the gear cable going external on the front triangle and the brake internal then reversed on the rear triangle with the gear cable heading into the chainstay just at the pivot. 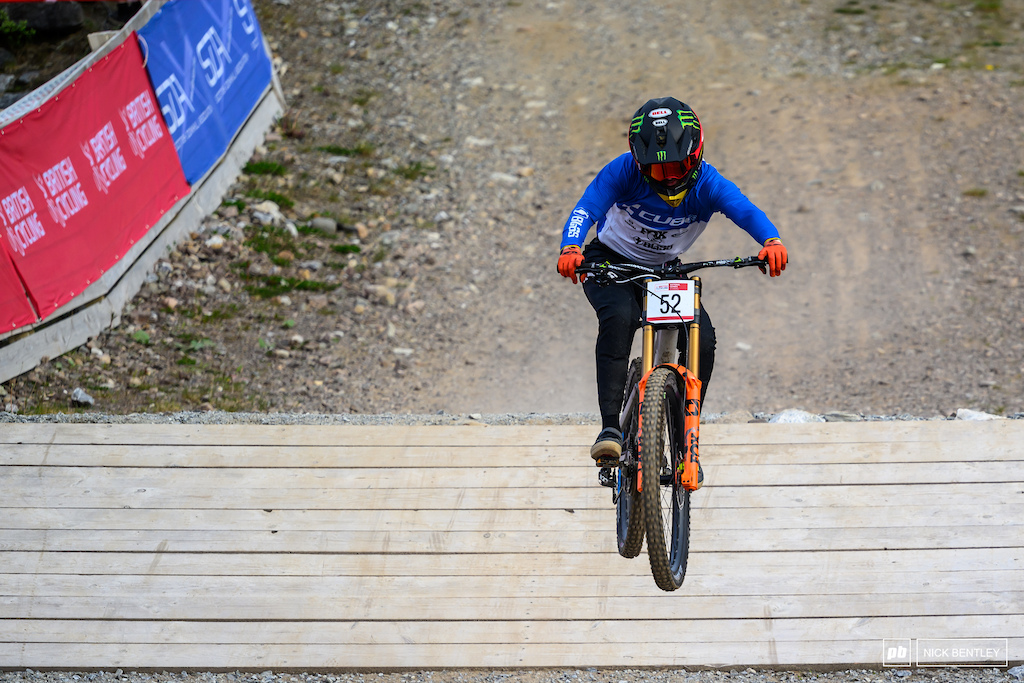 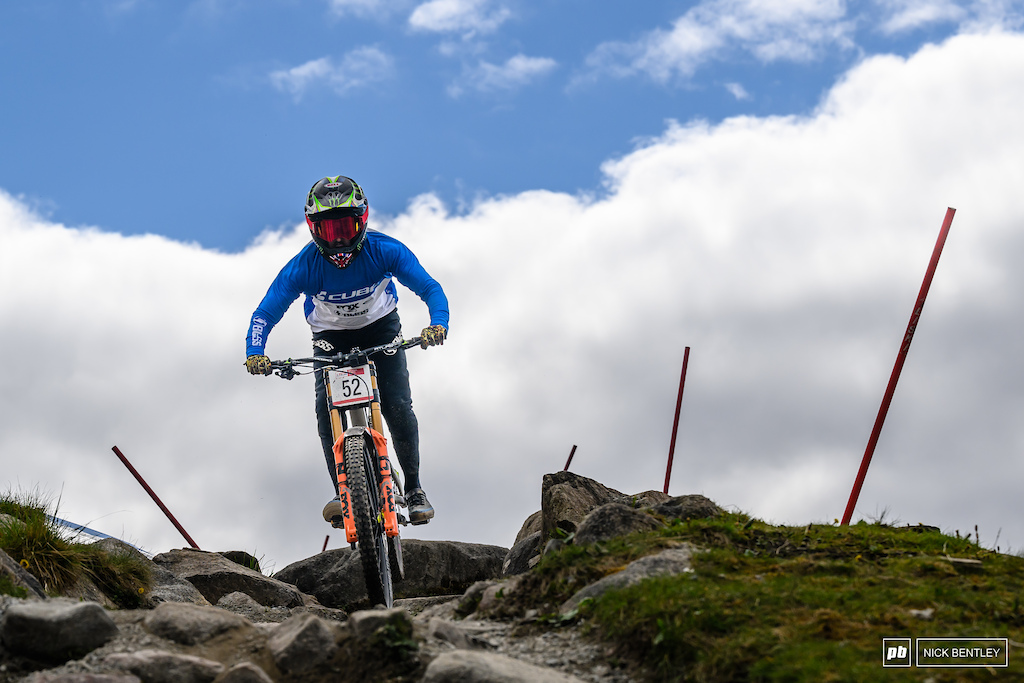 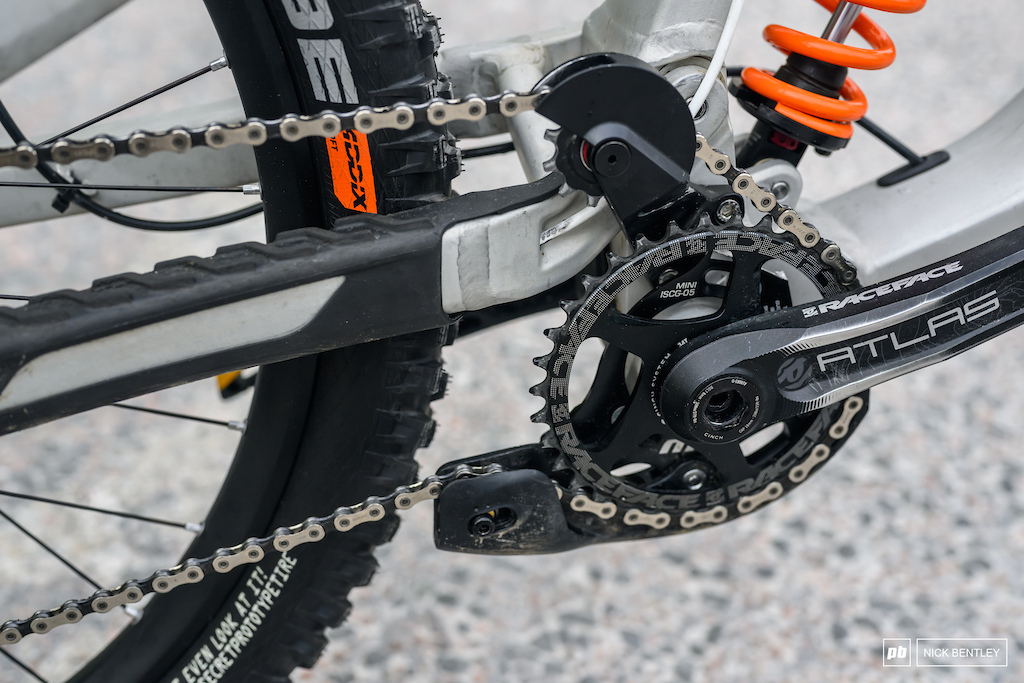 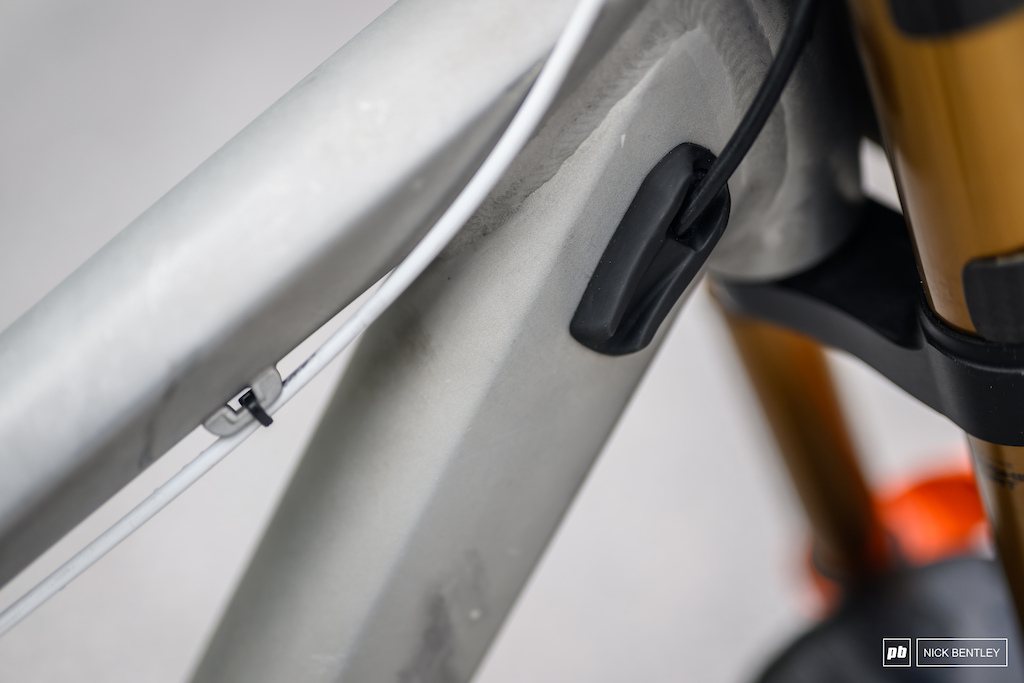 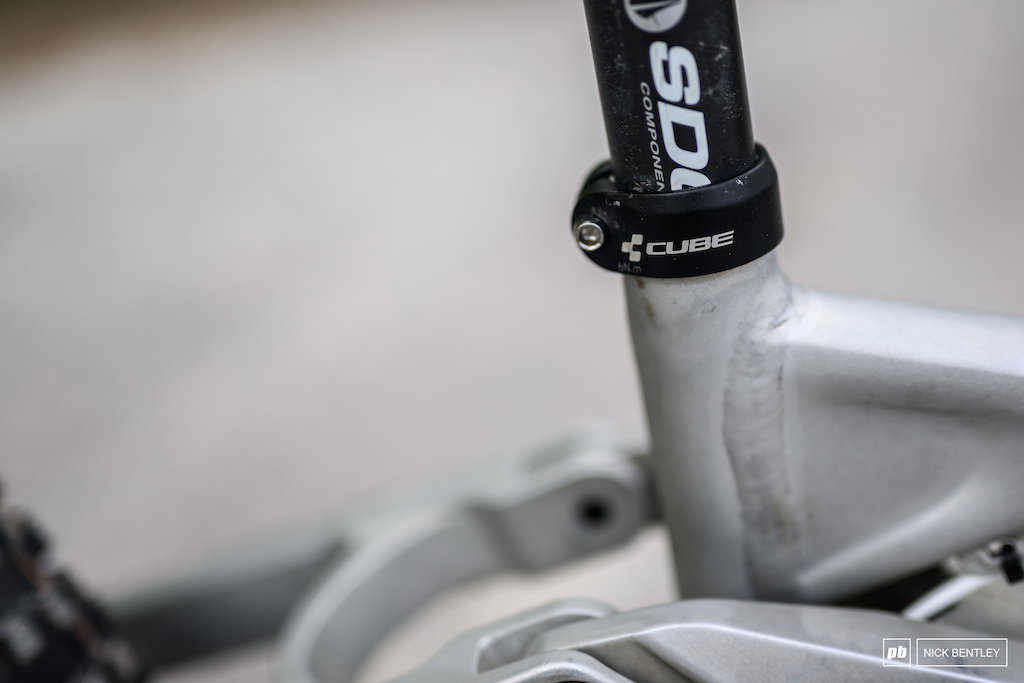 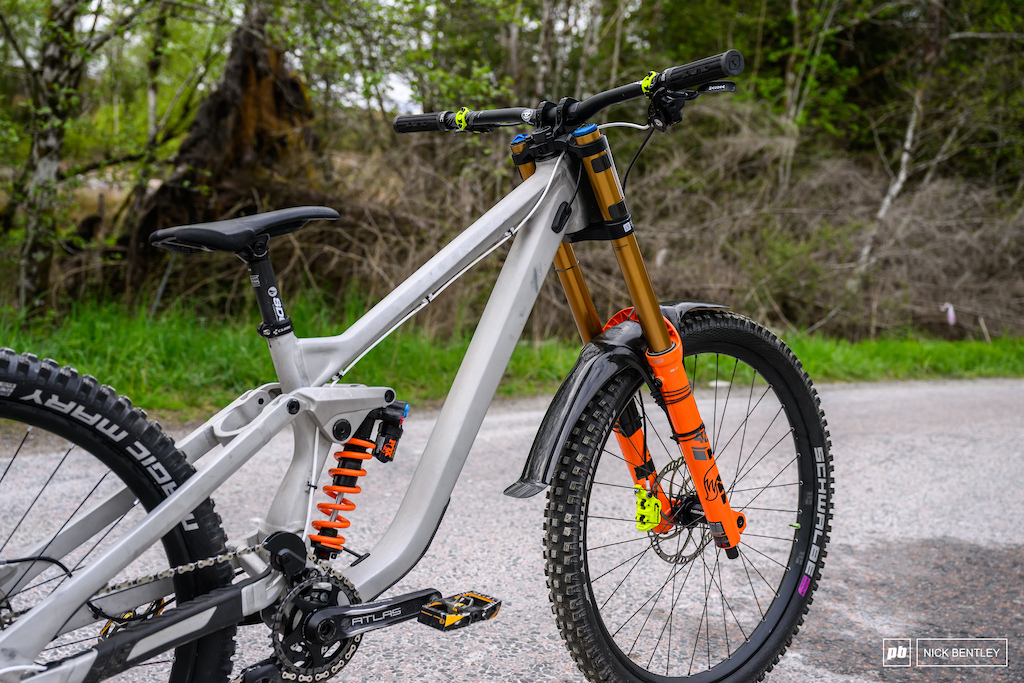 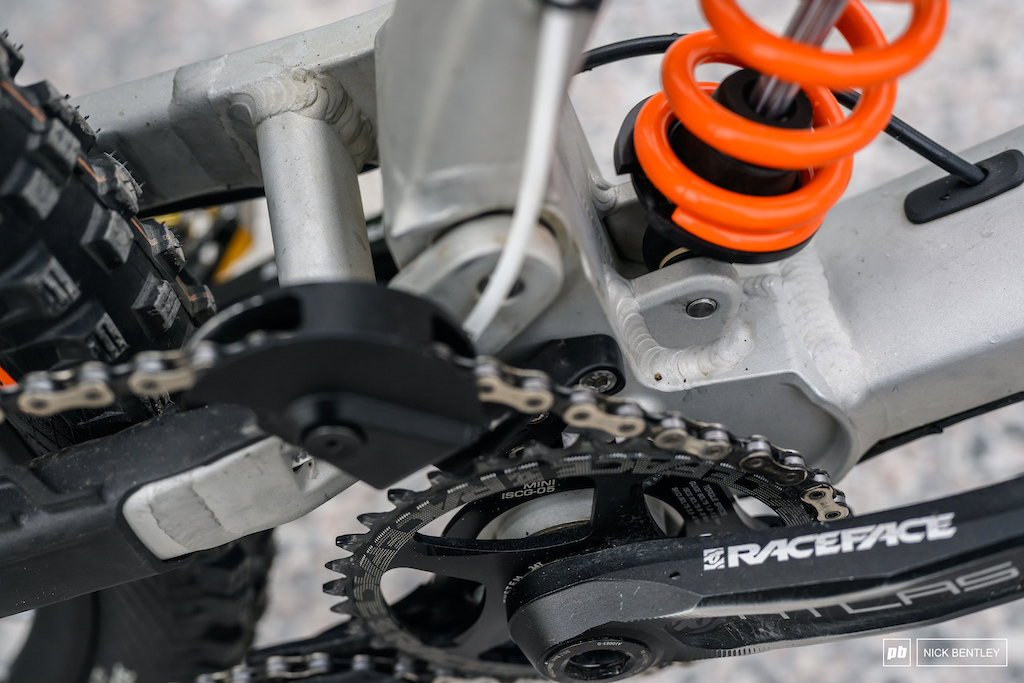 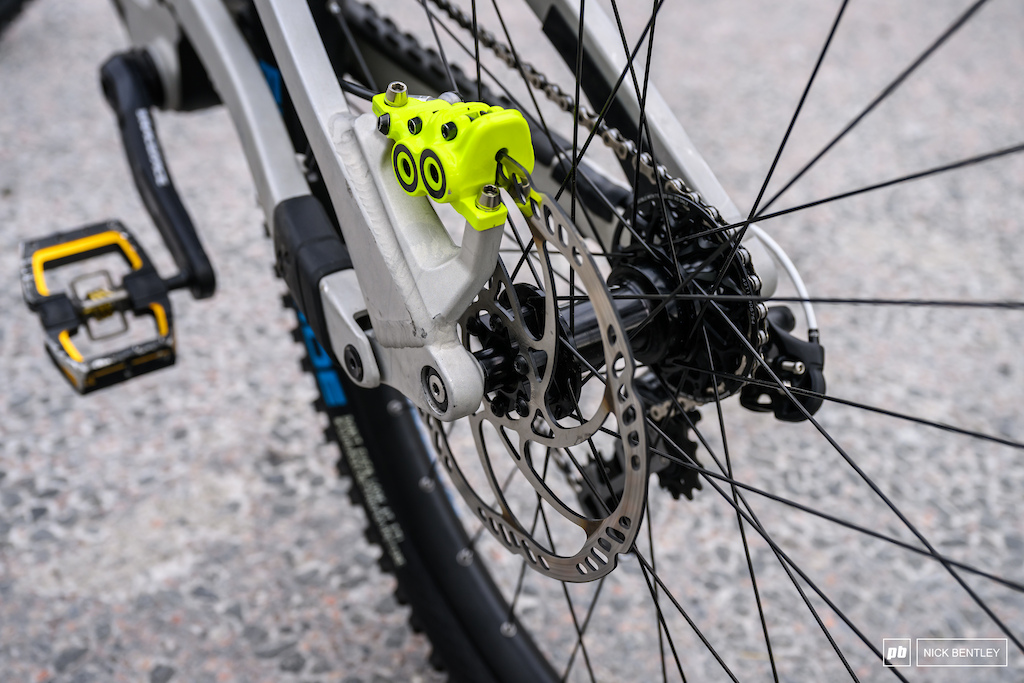 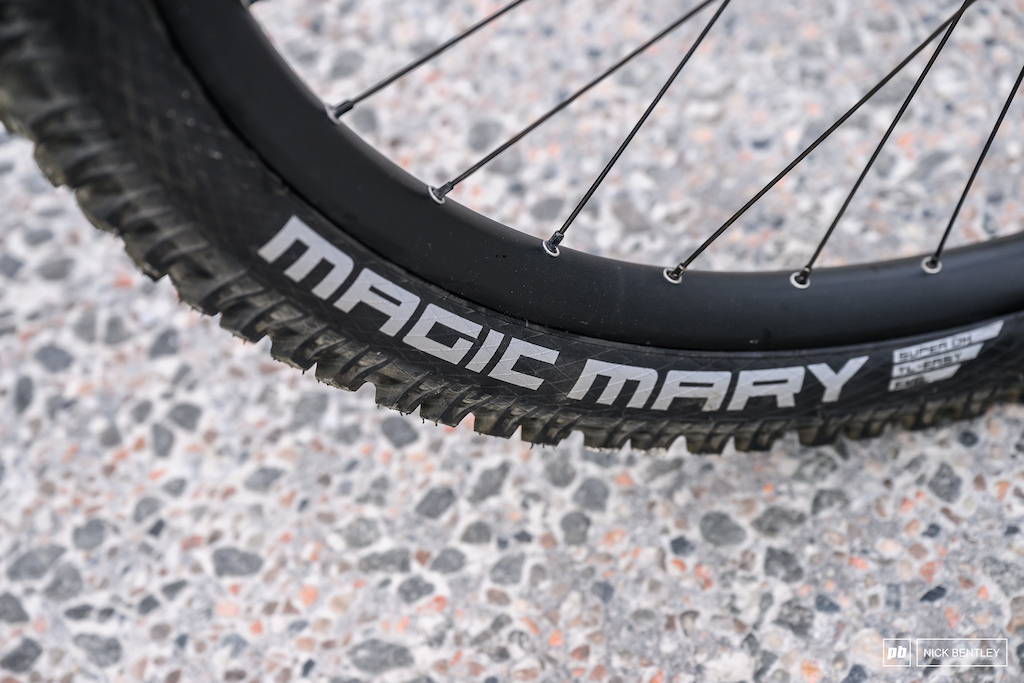 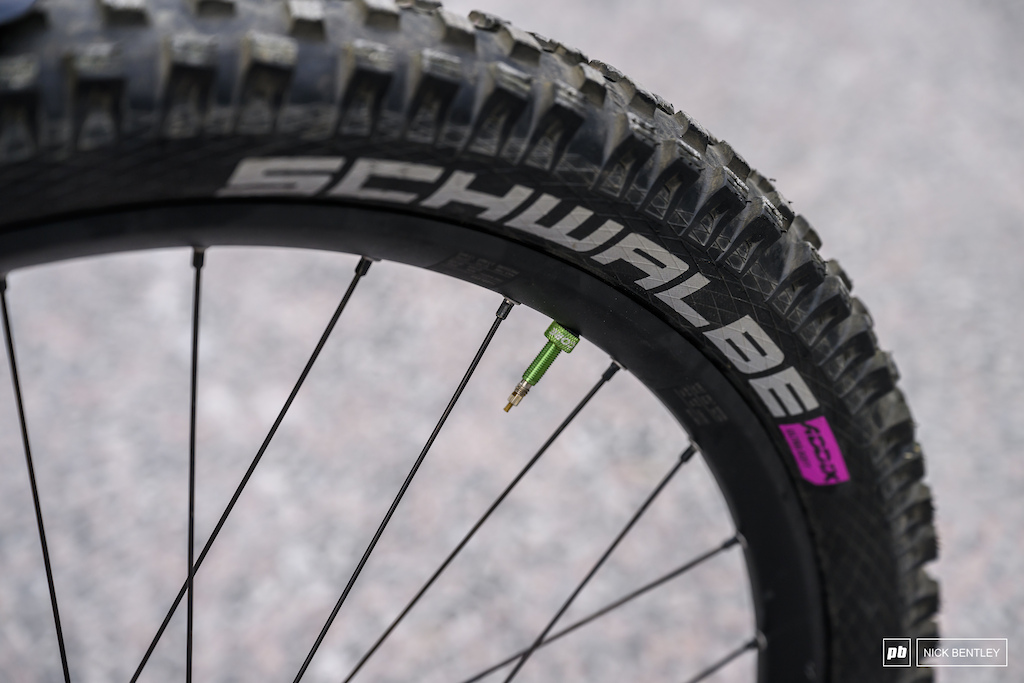 Danny is running a prototype set of Schwalbe's Magic Marys with Cushcore fitted front and back. Obviously, these are running tubeless with Schwalbes Doc Blue tubeless sealant of which Danny uses 90ml in each tyre. Pressure wise Danny was running 27psi in the rear and 23psi in the front. 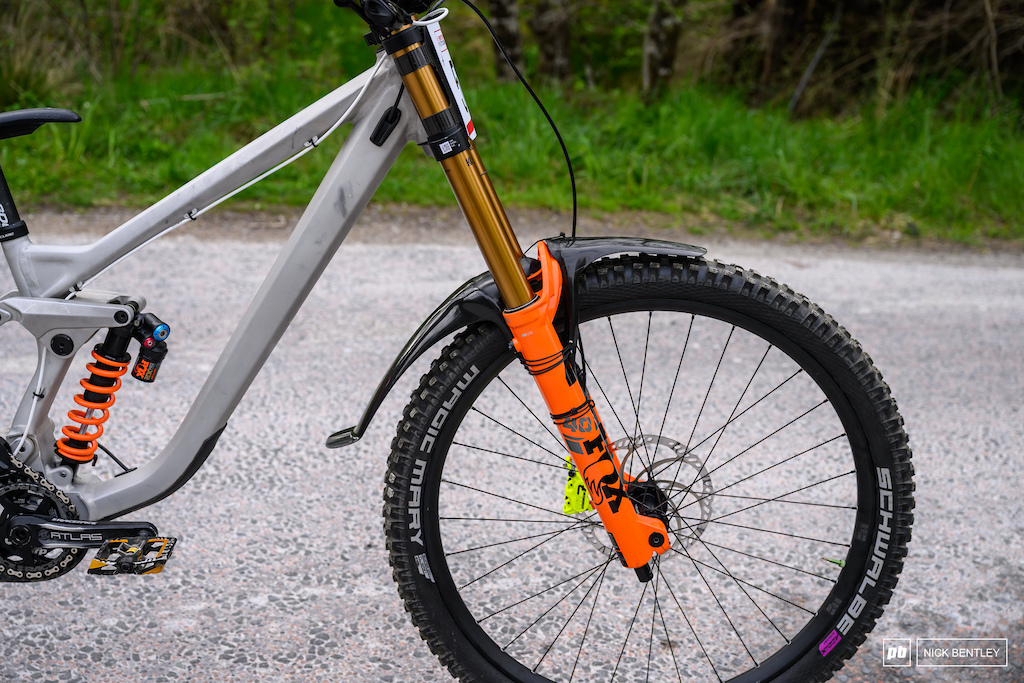 Danny is running a Crud XL fender on his fork which he will need for those wet muddy North of England riding days. 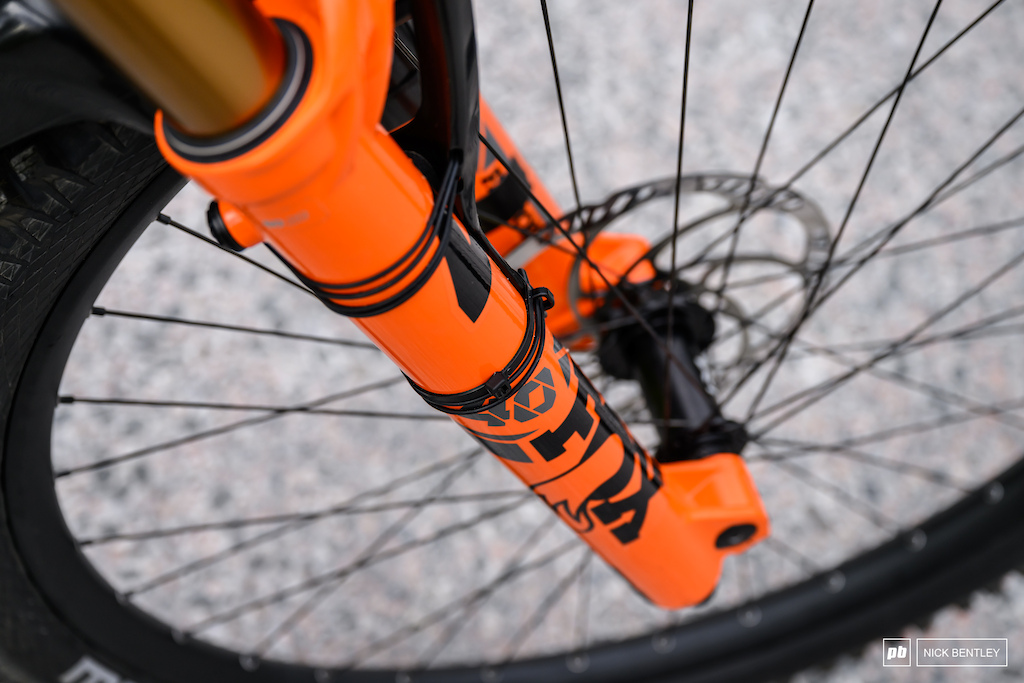 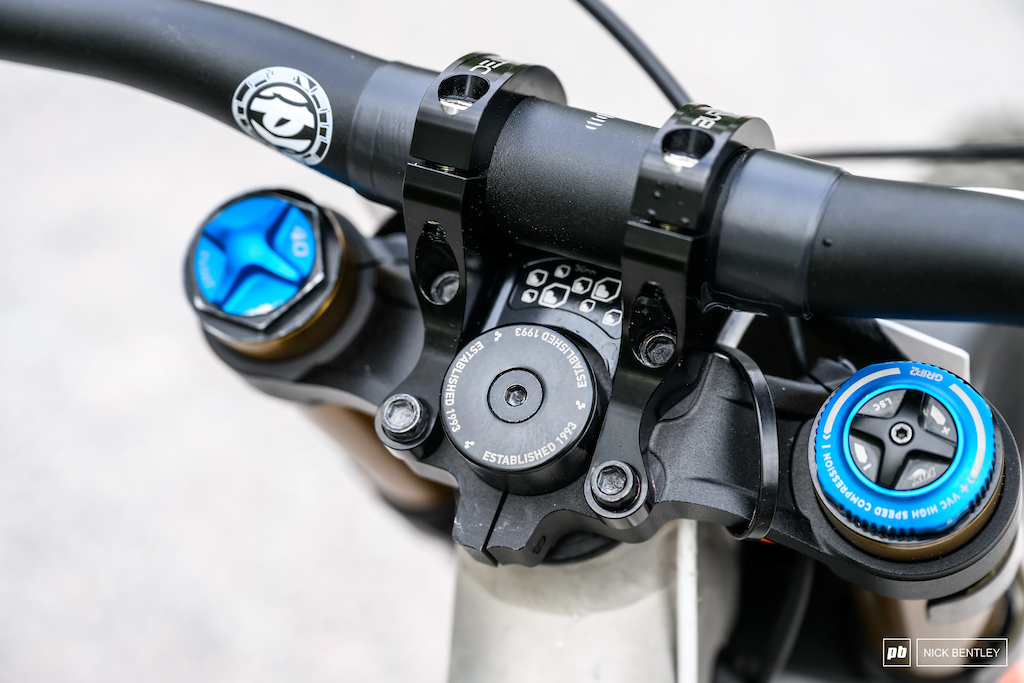 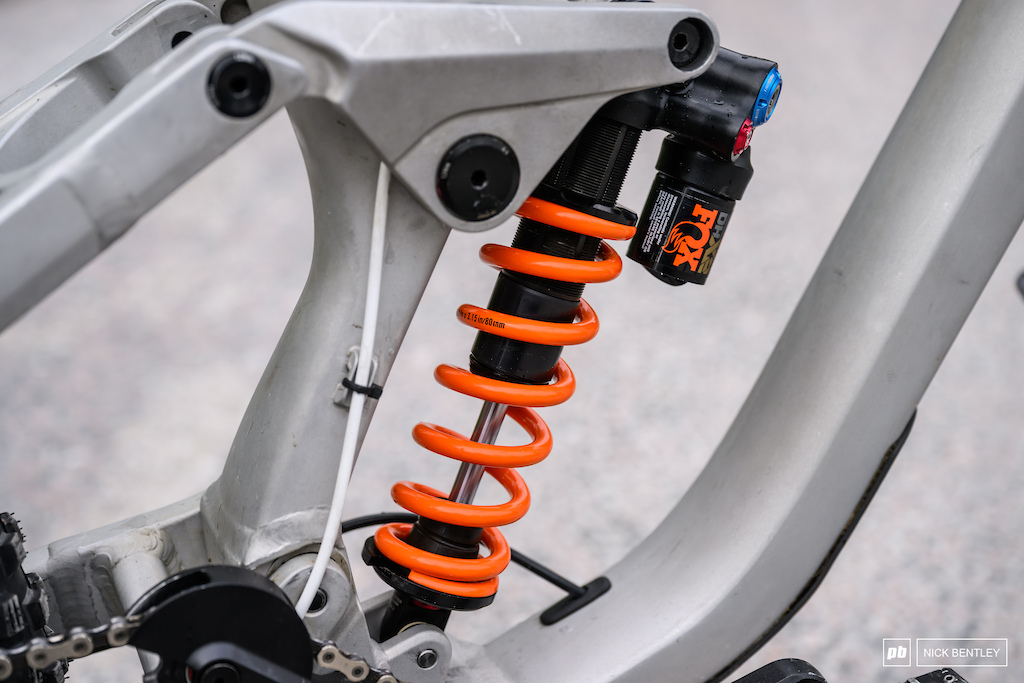 At the rear there is more from Fox. This time it is a DHX2 coil at the heart of the Cubes suspension. There is a Fox 400lb spring fitted. In the DHX2 Danny is running 7 clicks of high speed compression with 6 clicks of low speed compression. When it comes to rebound the high and low speed knobs are set to 4 clicks 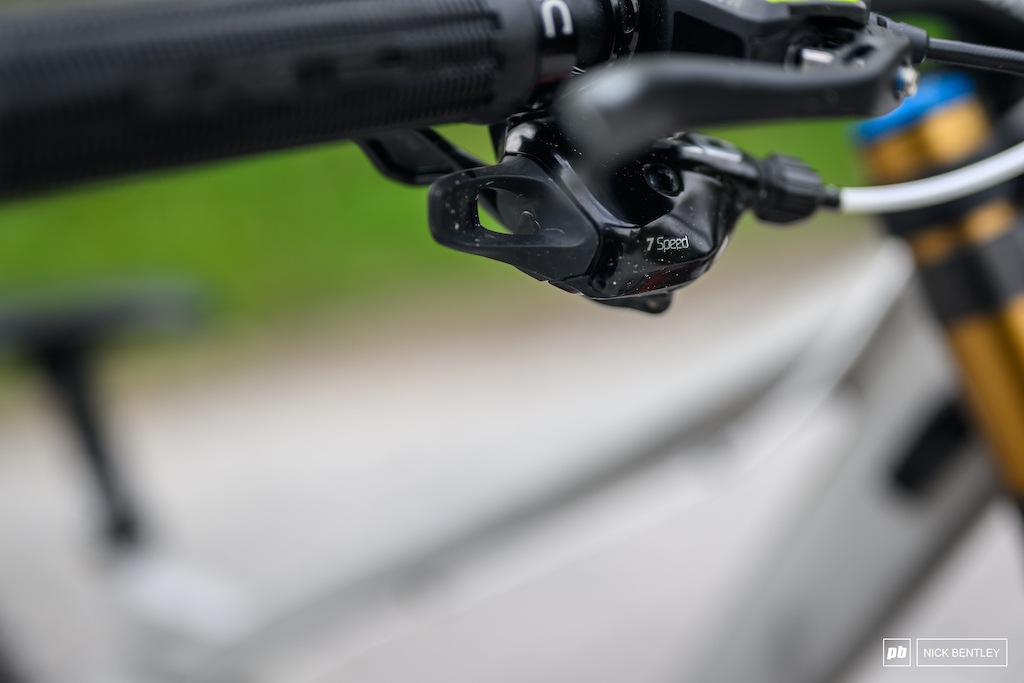 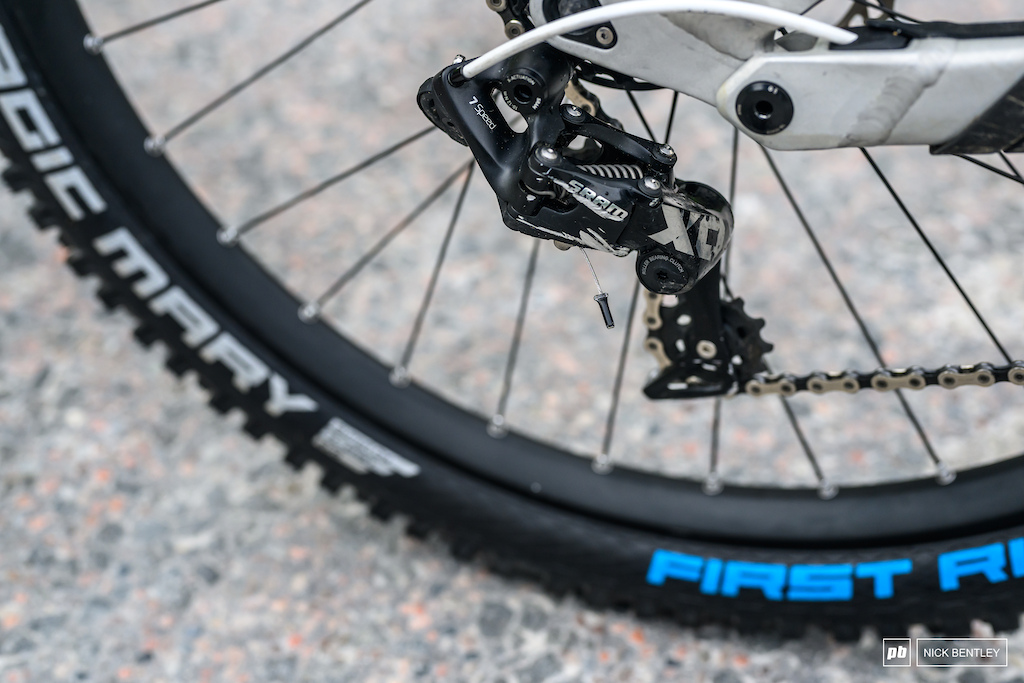 It's a SRAM drivetrain on Danny's bike. It's a SRAM DH XO 7speed derailleur and shifter to be exact, with a matching 7-speed cassette. These are so common around the pits. Alongside this there is a set of Race Face Atlas aluminium cranks that are 165mm long with a 34t direct mount Race Face narrow-wide chainring fitted. The chain is kept on the ring MRP's SXG chain device. Pedal wise Danny runs the ever-popular Crankbrothers mallet DH11 pedal and Danny winds the pins fully into the body of the pedal. 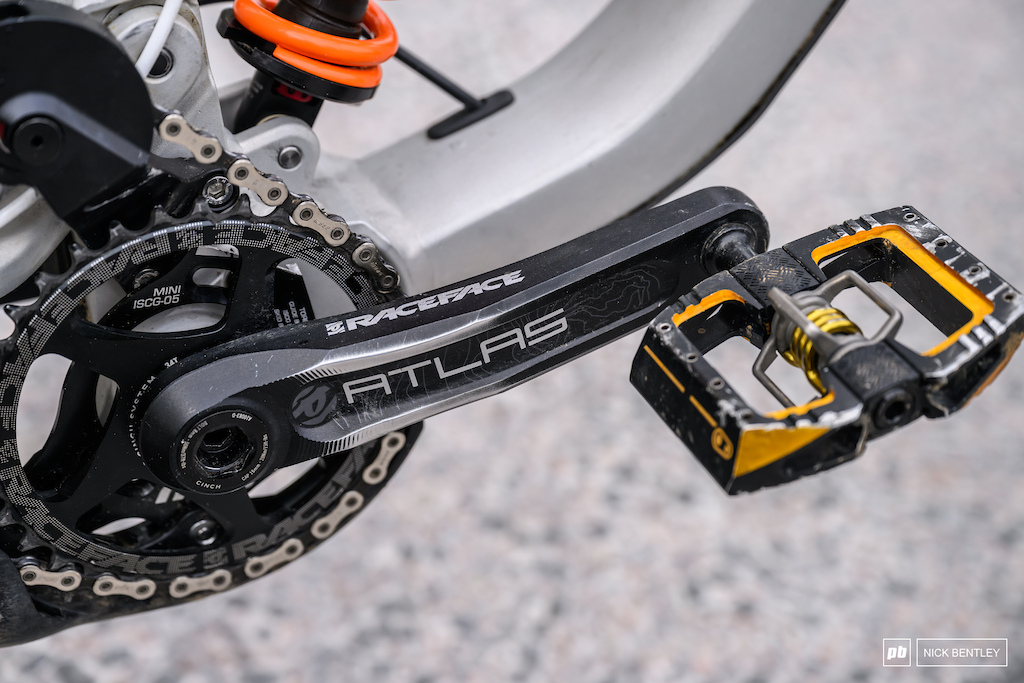 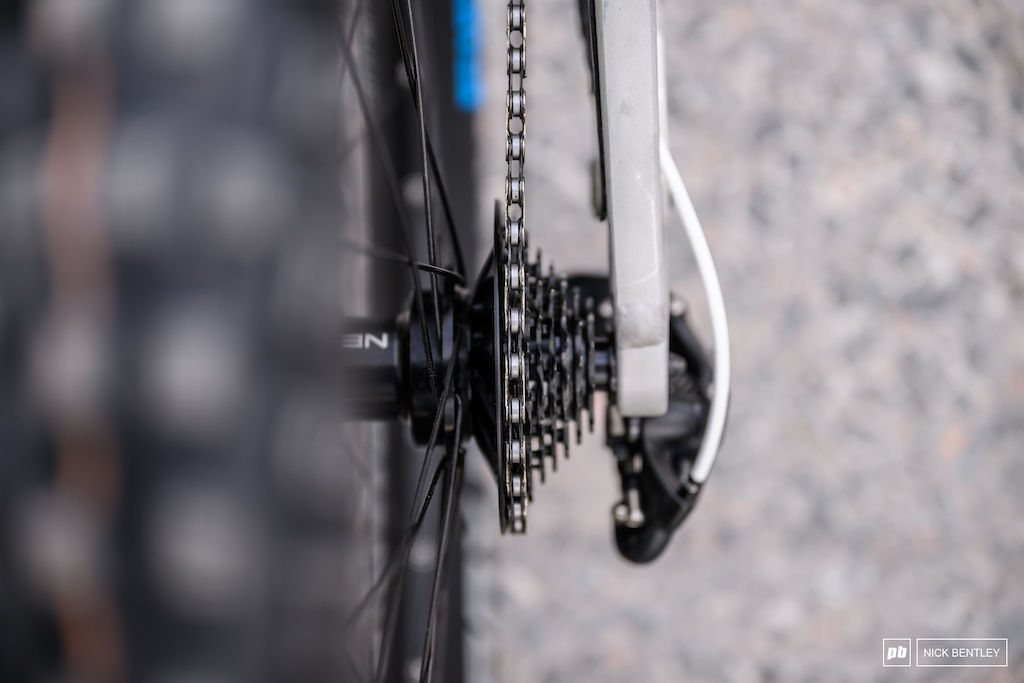 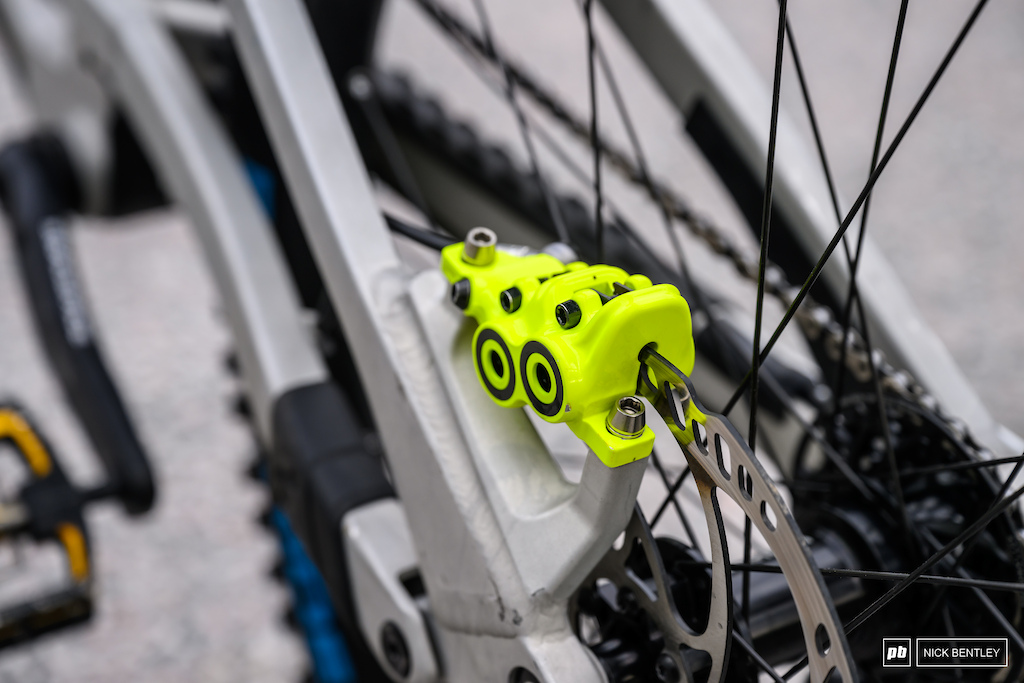 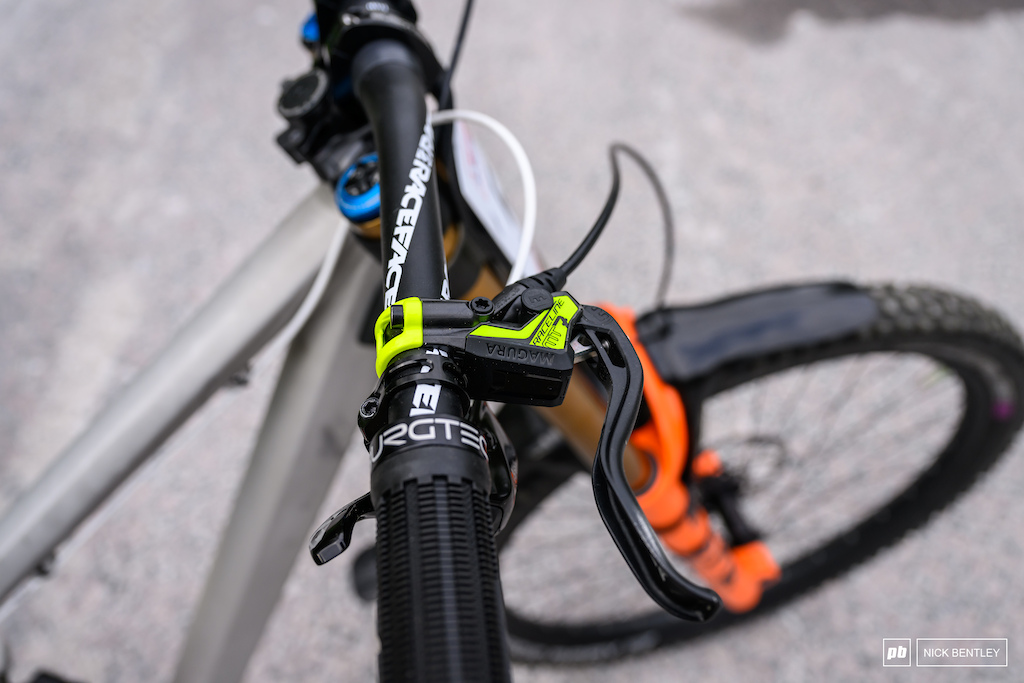 Bringing Danny to a stop is a set of Magura's Raceline MT7 brakes on a set of 203mm Magura rotors. 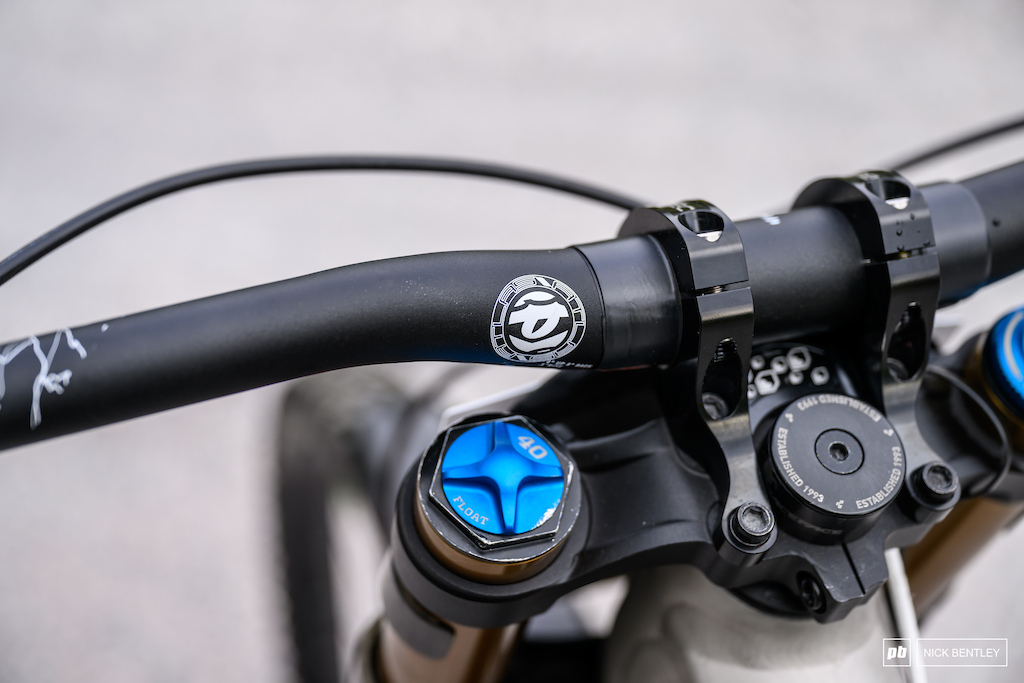 Whilst we are at the front end let's talk handlebars: it's a set of Face Face Atlas bars on Danny's bike. They're aluminium and have 20mm of rise cut down to 770mm wide 8 degrees back sweep and a 5-degree upsweep these are mounted to the top of the Fox 40 crowns with a direct mount stem that is 50mm long. Also there is some high-end electrical tape to help Danny's bar-mounted GoPro clamp fit just a little tighter. 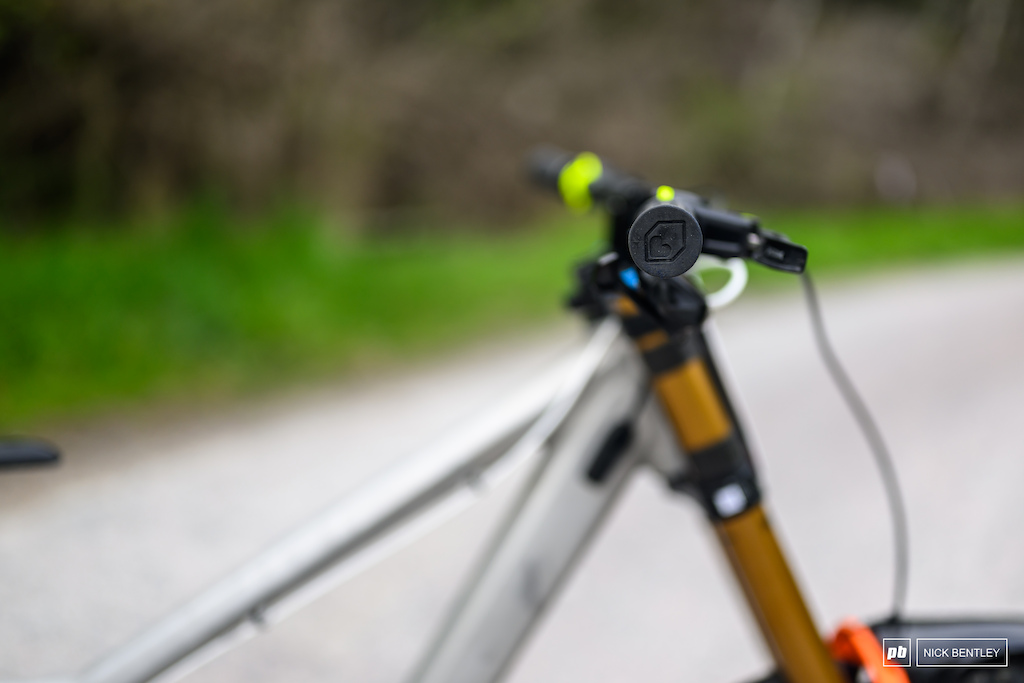 Sat on the end of the bars is a set of Burgtec's Greg Minnaar grips in the supersoft compound. 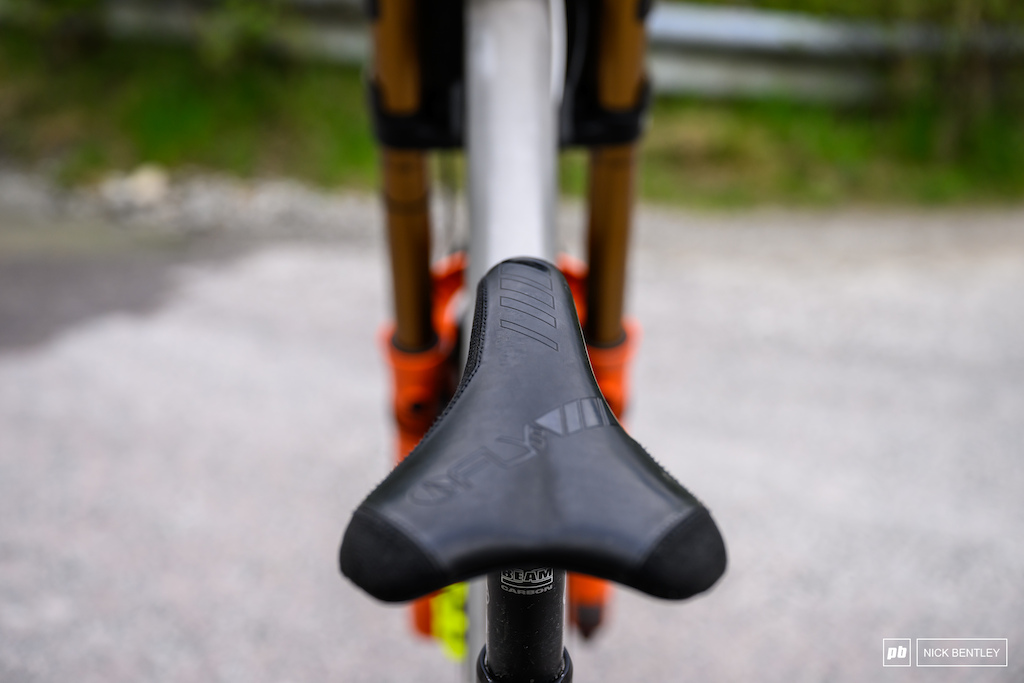 Last but no means least there is an SDG I-Beam saddle and seat post. Danny has 75mm of seat post showing from the top of the Cubes frame.

bobsten (May 12, 2022 at 8:42)
"clicks" are pretty irrelevant without knowing from open or closed. Not to mention shim stacks developed around Danny.

bobsten (May 12, 2022 at 13:34)
@leon-forfar: Agreed that they should be and that's the standard I live to, but without the context / knowing the author's standard, this information is irrelevant.

gabriel-mission9 (May 13, 2022 at 4:56)
Clicks are not always from closed. In fact in my experience, most people who say "im running x clicks of whatever" are counting from full open. There is an argument that counting from closed is more transferable across dampers (and this is somewhat true for at least low speed adjusters) however if the article doesn't specify, then there really is no guessing which way they have done it.

gabriel-mission9 (May 13, 2022 at 10:00)
@bobsten: yeah, thats what I meant about counting from closed being more transferrable. But most people still just naturally count from full anti-clockwise.

sino428 (May 13, 2022 at 12:13)
@gabriel-mission9: Starting at open or closed is just a reference point. It really make no difference how the numbers of clicks is presented, its going to end up in the same place either way. There won't be any consistency from fork to for if the overall number of clicks isnt the same. It likely won't be even if two different forks have the same number of clicks as the range (and amount of change per click) could be different.

Counting from closed does seem to be the industry standard as its that way in every manual or tuning guide I've ever seen put out by the manufacturers. I assumed it started that way based on how people used to use trial and error out on the trail to setup their forks. If you are going to start at one end and work your way out until you find the sweet spot you'd want to start closer to closed. Starting with an under dampened spring and uncontrolled rebound could get you hurt on the trail, while having the dials set to far closed would likely just be a harsh ride at worst.

leon-forfar (May 13, 2022 at 13:39)
@sino428: Well, no, it won't end up in the same place either way. 3 clicks from closed, won't be the same as 3 clicks from open if there are 16 clicks or whatever. I understand using whichever as a reference point, but if you are taking setup seriously, you need a consistent starting point, which is closed. You are right that forks can have different amounts of clicks. For instance, a Fox Grip 2 damper has 16 clicks of low speed rebound/compression adjustment. The fork itself might have the ability for the knobs to be turned 18 clicks. Those two "bonus" clicks literally won't do anything but give the uninformed rider the impression that they are adjusting something. If you go from closed, there is no question that the adjustments are doing what they are supposed to. Each click is essentially winding out a dial. you can't go past closed, but you can certainly continue to twist past full open, which will have no effect on anything.

One analogy I heard along the way was thinking of it like a door between a lit room, and a dark room. Closed will let no light through. Open the door up a little bit (like one click), and the light coming through will be very concentrated. Each little bit that you open the door will have a very meaningful effect on the amount of light let through up to a point. When the door is more than half way open, it becomes much harder to really notice a difference in the amount of light now coming through the door. If the door is 100% open vs 85% open, there will be almost no change in the amount of light. But if the door is 5% open vs 20% open, you will have a noticeably difference in light. The valves in the dampers are essentially doors, and the oil is the light.

Thanks for pointing that out. But you missed the point if you think that's what I meant.

I agree that starting from closed in a better way to do it, but there is no reason you can't get to the same result starting at open.

islandforlife (May 12, 2022 at 10:06)
It's a prototype... and a high-pivot prototype at that... who knows what they're doing, but they may be experimenting with various drivetrain options that necessitate the ability able to change out quickly/easily?

Who knows... but it looks very temporary to me. I'd expect the final version won't have those grommets and will be all internal like their current production bikes.

Funkylicious (May 12, 2022 at 14:13)
This is the Hybrid inclusion prototype with both internal and external routing, black and white cables, yellow calipers, with gold, tan, orange and blue to round it out over a non-binary raw foundation.

DirtyHal (May 12, 2022 at 9:25)
Interesting that he is running no HSC as there is only 8 clicks on that fork. New fox tunes are so soft that I’m assuming most of the WC guys are having it revalved stiff and just run it open.

iirc Greg mentioned in one of the last dialed videos he runs his wide open too for HSC.

adzrees (May 12, 2022 at 6:59)
Hopefully he can use this lovely bike to repeat what he did last weekend for the big race at fort bill!

Leg (May 12, 2022 at 10:24)
If you do more detailed bike checks with pro riders a nice thing to add would be handlebar roll. It almost never mentioned. Forwards? Backwards? Neutral? Imo a quite important detail and also something that can completely change the feel of the bike.

Leg (May 12, 2022 at 11:44)
@domdb:
You can kinda count it as “neutral” when the rise is aligned with the fork angle , forward when its on a steeper angle than the fork etc. U get the point…No need to go full scientist , but it provides good info , if you ever tried a bar with 30+mm of rise you know how big the difference can be.

Velocipedestrian (May 12, 2022 at 14:39)
@Leg: neutral should be vertical rise, then the grip sections are up and back swept as designed.

muumuu (May 12, 2022 at 9:24)
I like the vibe the mismatched housing is sending. I read it as clearly caring about more important things

islandforlife (May 12, 2022 at 10:10)
Also looks very prototype-y and temporary... they're testing a new high pivot design... maybe they want to be able to quickly test different drivetrains etc.??

tajtigabor (May 12, 2022 at 9:19)
Cube can’t stop this development process until their dh bike’s siluette looks identically the same as, sorry but have to say: a session.

rallyimprezive (May 12, 2022 at 7:34)
I figure its only a matter of time before we see high idlers that mount to the ICSG available sale.

powermutant (May 14, 2022 at 18:11)
I'm not sure whether this is tongue in cheek humour. But no, the idler is just to manage pedal kickback due to the bike having a high pivot.

BiNARYBiKE (May 12, 2022 at 7:19)
Good looking bike. Downhill bikes are so sweet; wish I could justify keeping one in the garage but I have to earn all my turns!

That main pivot point is really not all that high.