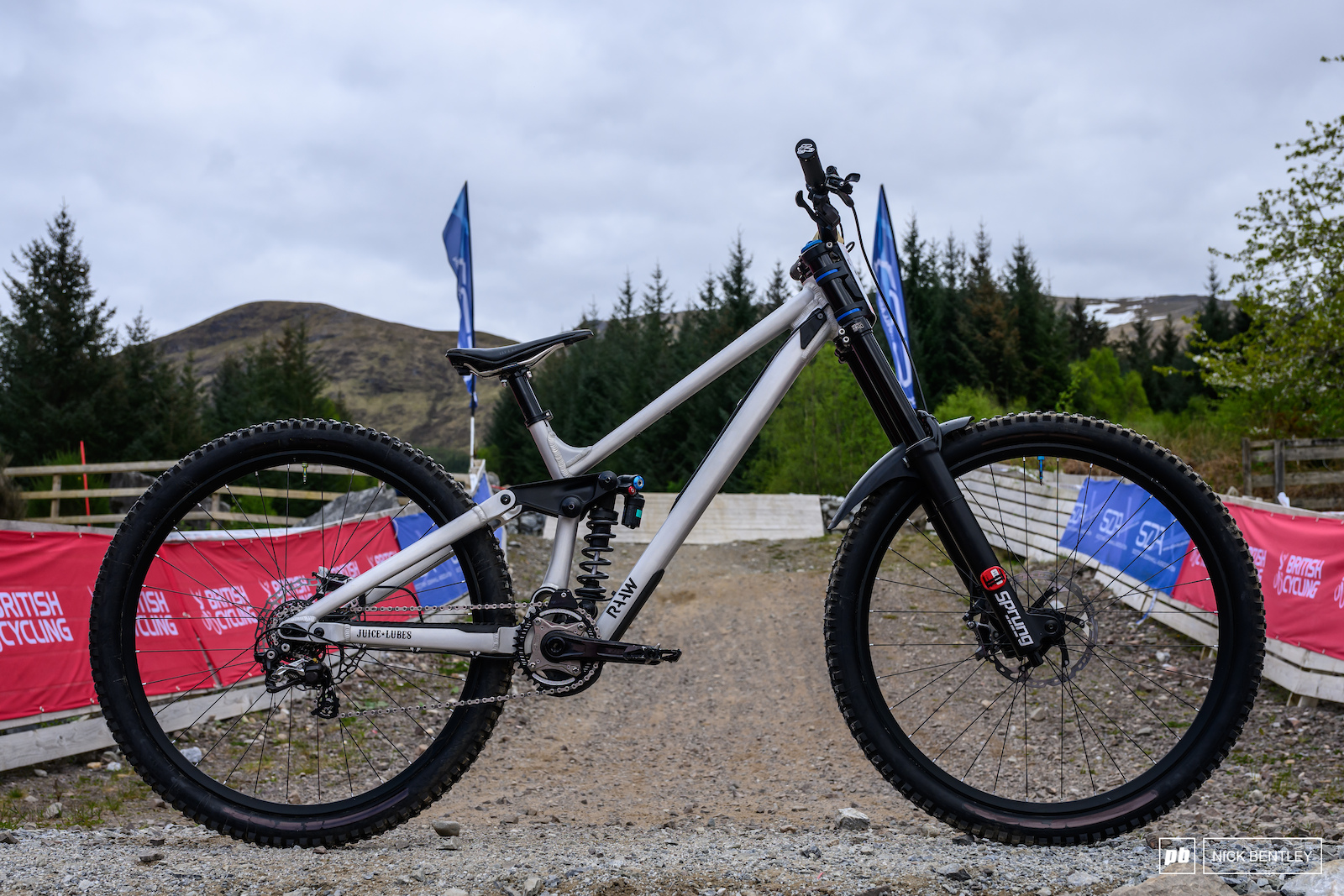 BIKE CHECK
KJ Sharp's
RAAW DH
Words & Photography by Nick Bentley
When I spoke to Dan Roberts from RAAW about KJ's bike for Fort William he had this to say: "We’ve got it set up to have her in a comfortable, aggressive but more importantly a balanced position on the bike with the suspension in that lovely window where the wheels are fluttering fast enough over all the rocks while keeping the wildness in check when the bigger rocks and holes need to be dealt with.

"Confidence in the tire grip seems to be paramount at Fort William, especially in the front tire. So loading it enough to allow the rider to sort of forget about it, raise their eye line and be bang on with their lines and carrying speed, all the while not overloading it and taking a load off the back and having traction issues at the rear. It’s a tough track for everyone involved in making the bike and rider go fast.

"The whole bike is a special feature really. It won’t be available until early 2023, so this year is all about racing the bike and tweaking the hell out of it to be the best it can be while putting it well and truly through its paces at the highest level of competition." 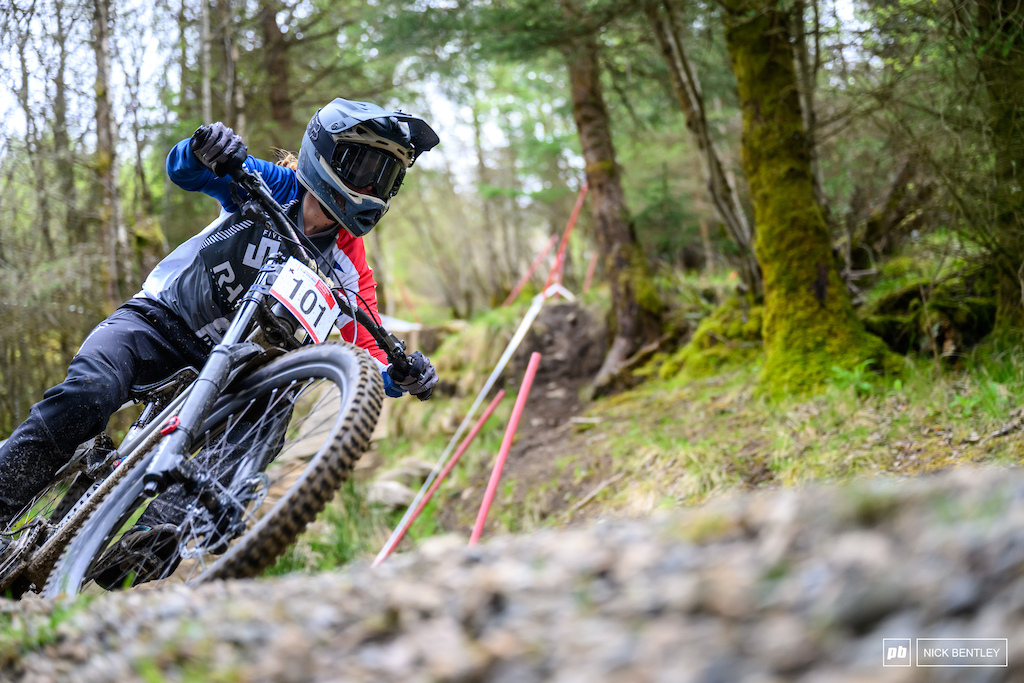 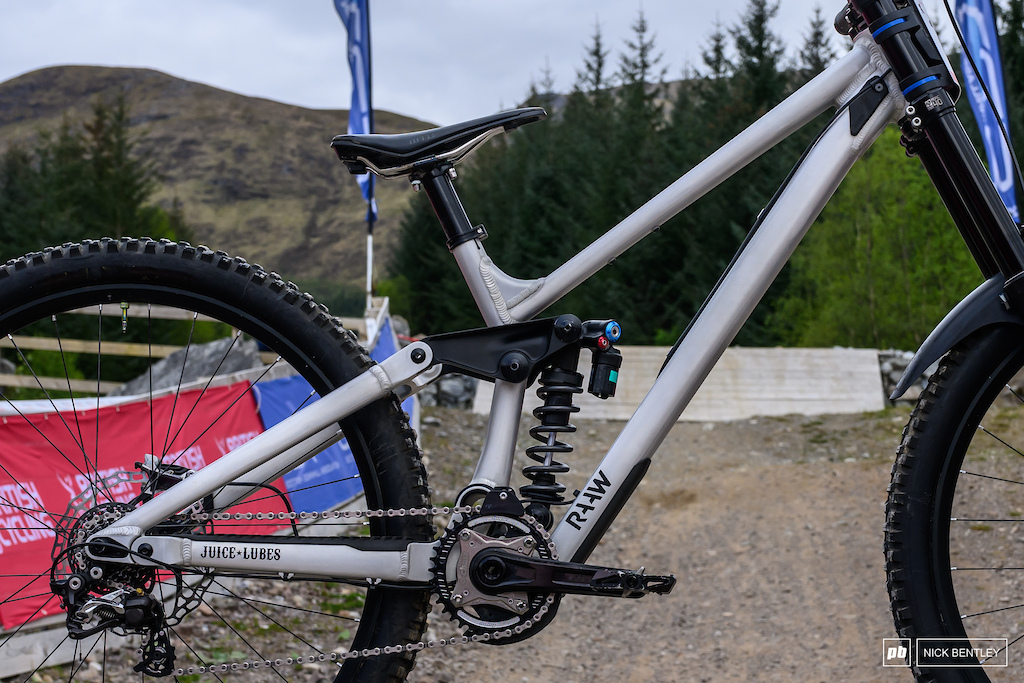 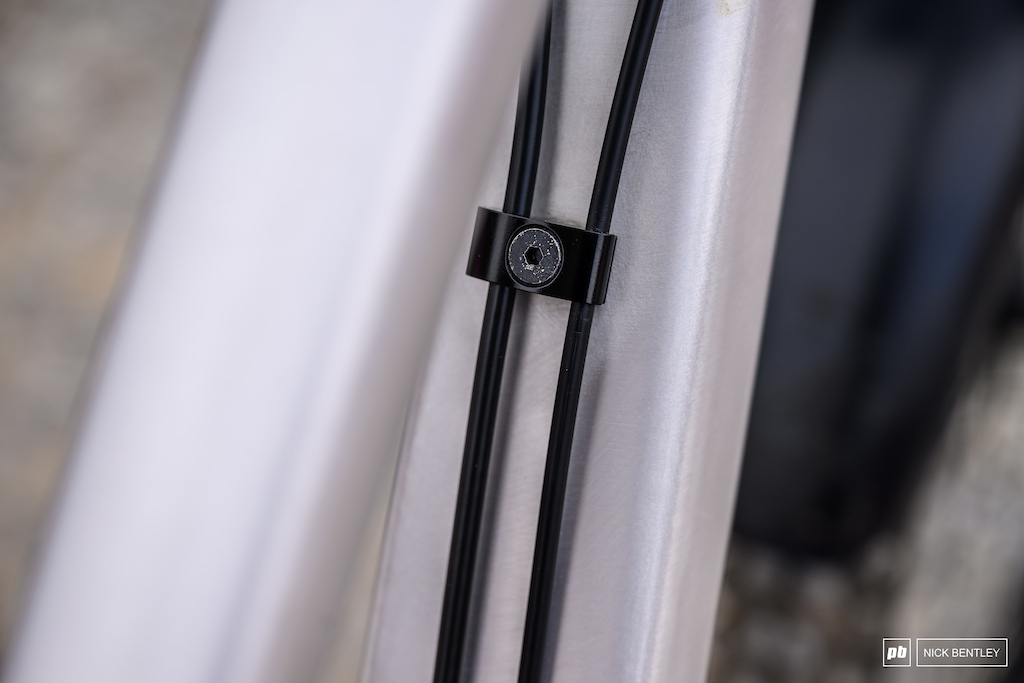 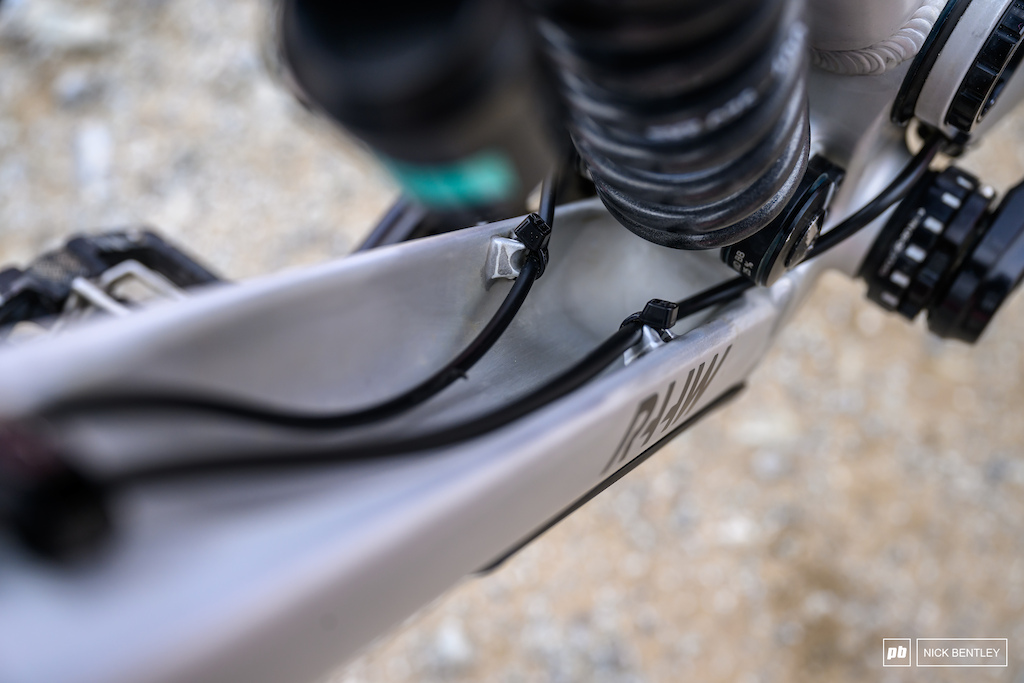 In keeping with RAAW's user-friendly frame design, the DH has fully external cable routing for both the gear cable and the rear brake. 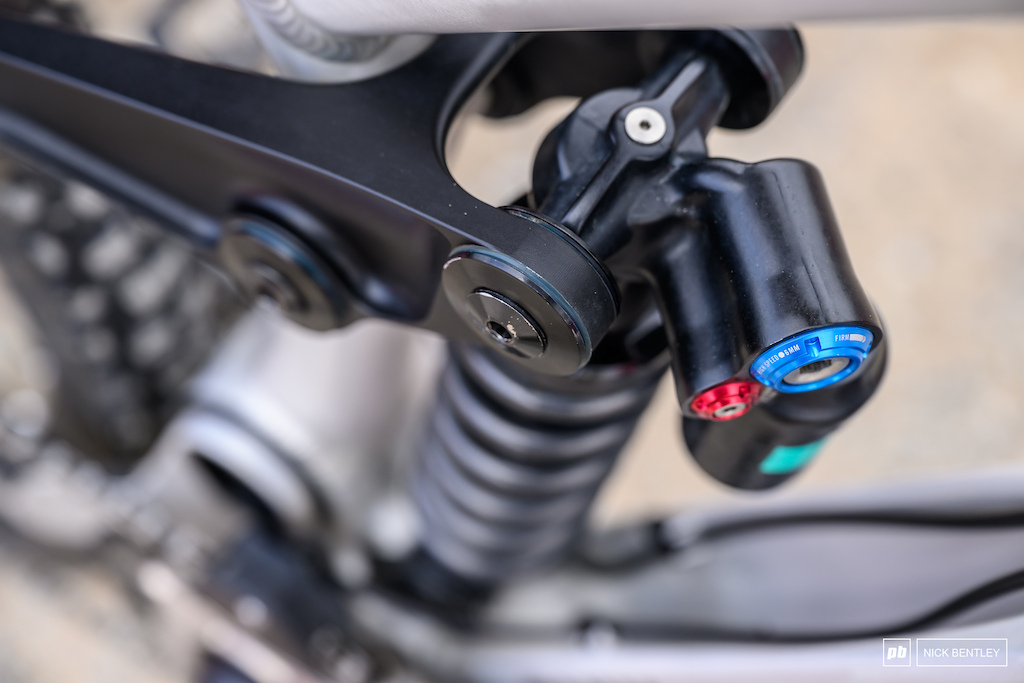 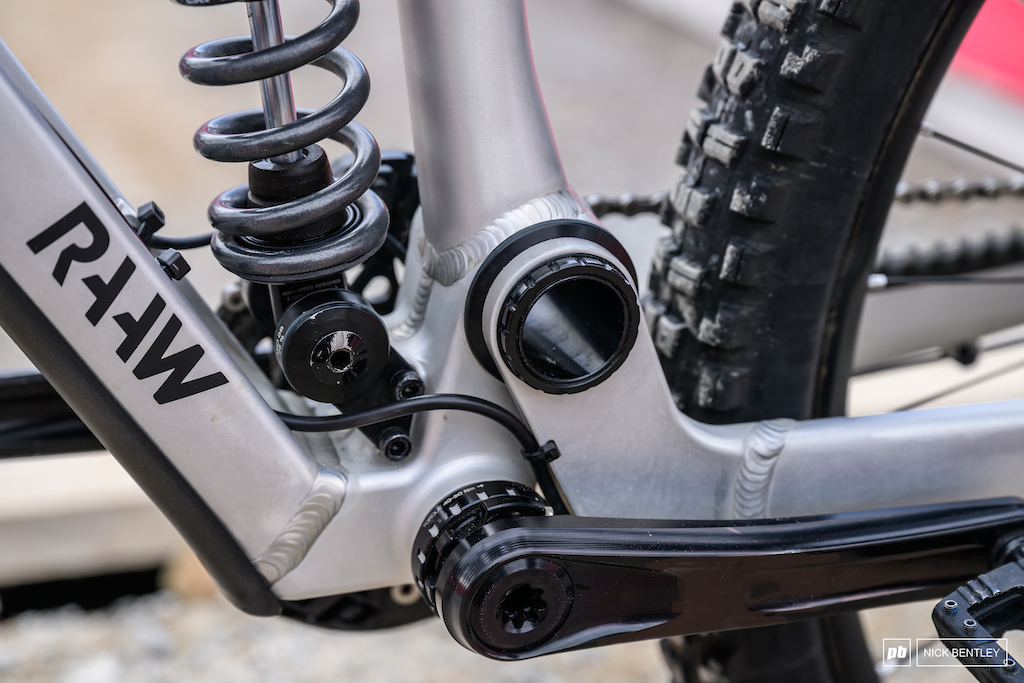 Like the Madonna and the Jibb, the DH has larger bearings with extra sealing to keep them rotating smoothly. 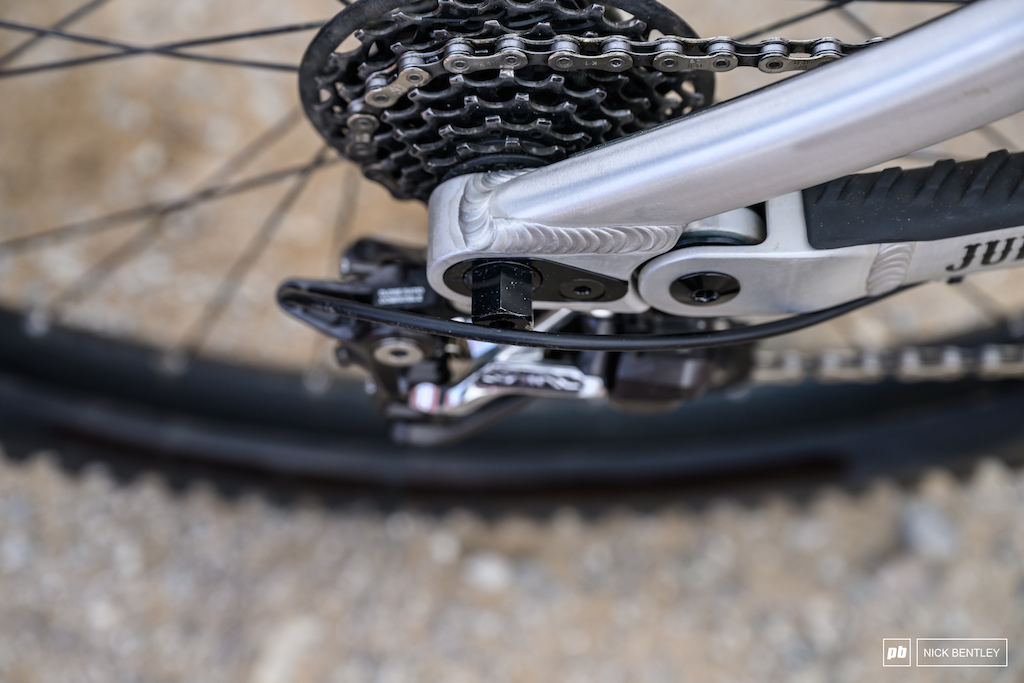 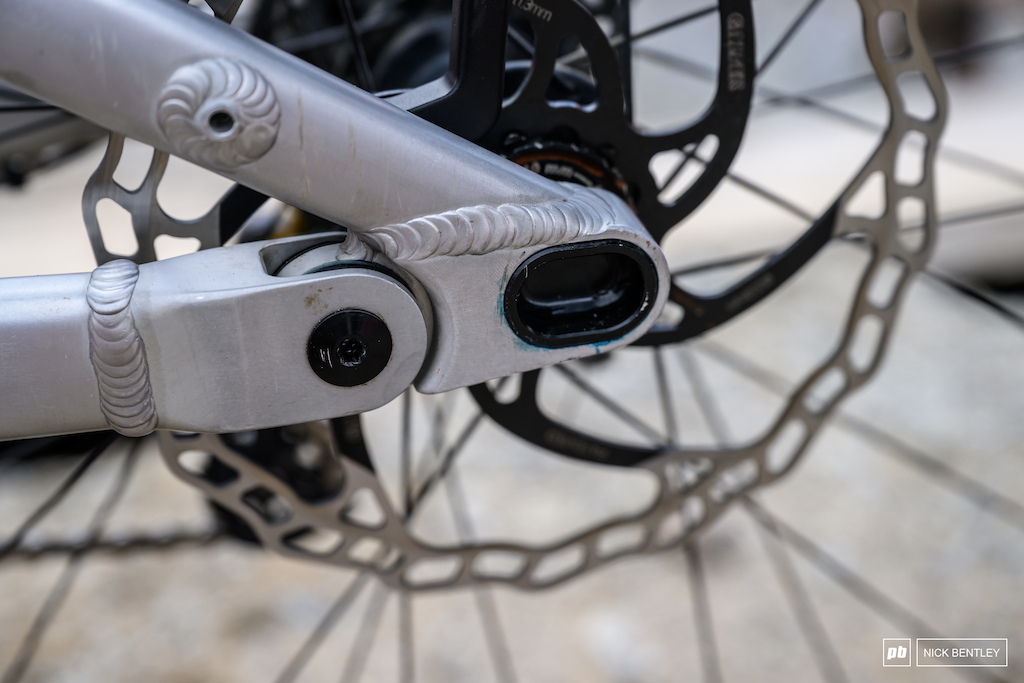 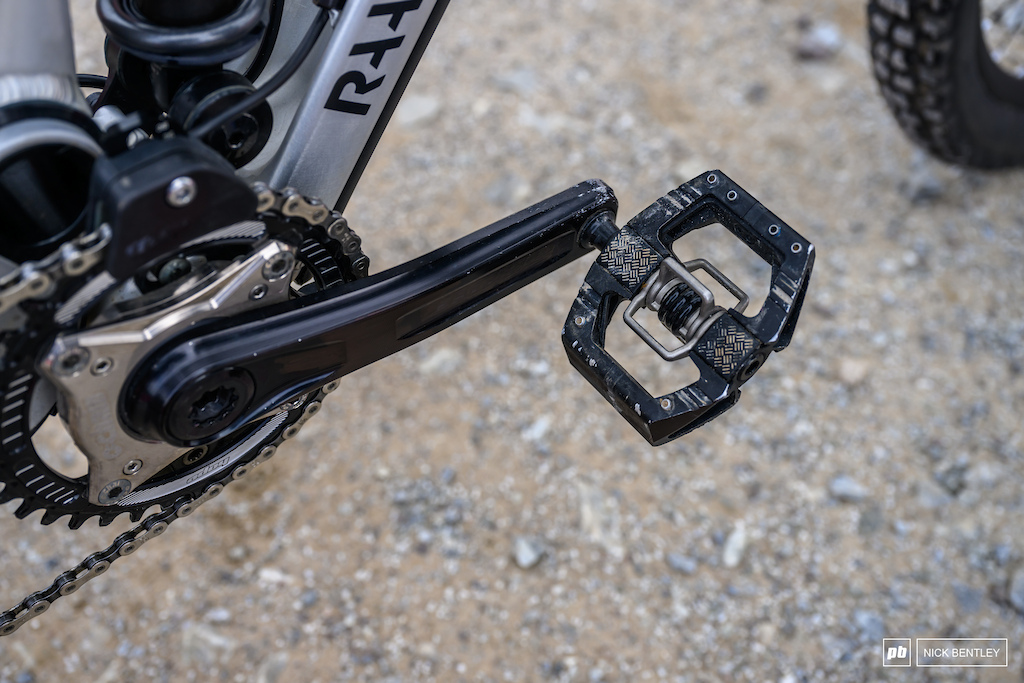 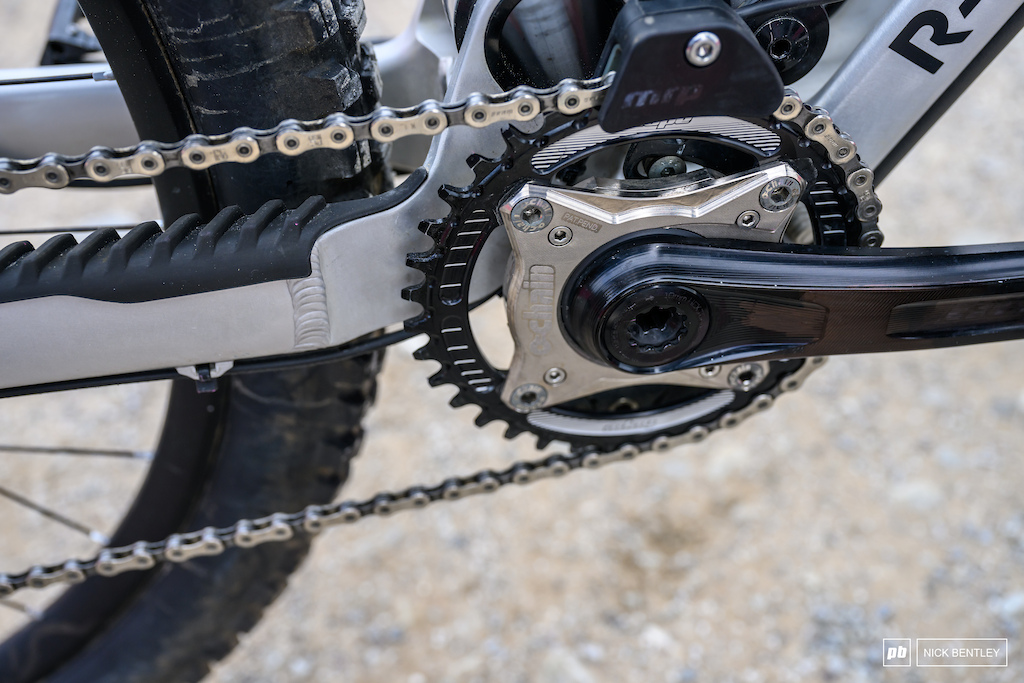 KJ is running 165mm Hope cranks with a Hope 36T chainring, and an OChain set to 9 degrees. 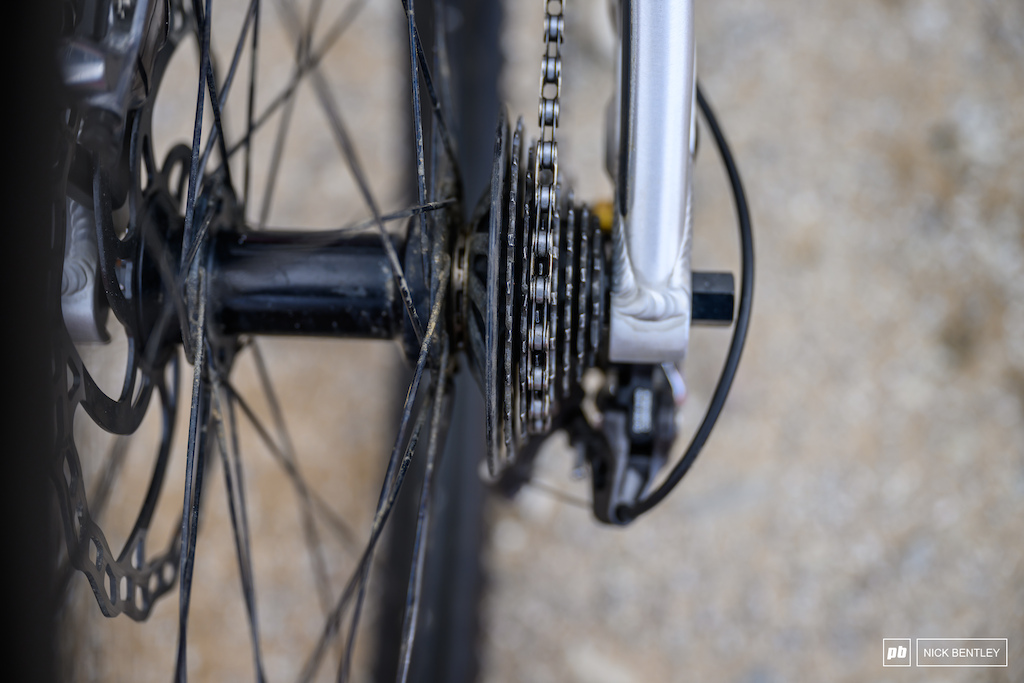 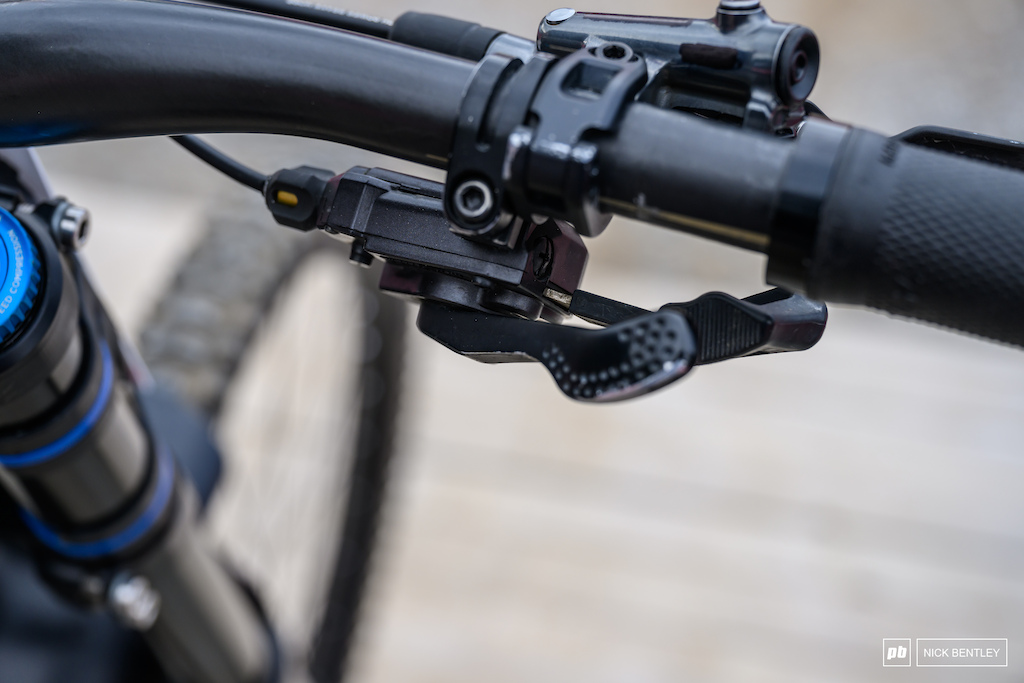 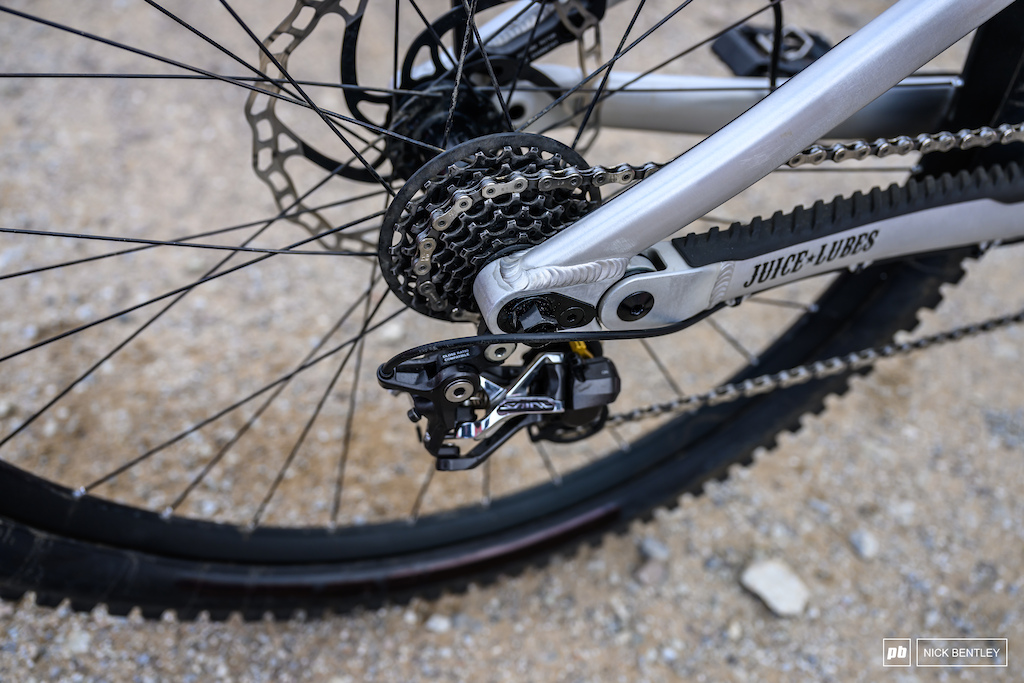 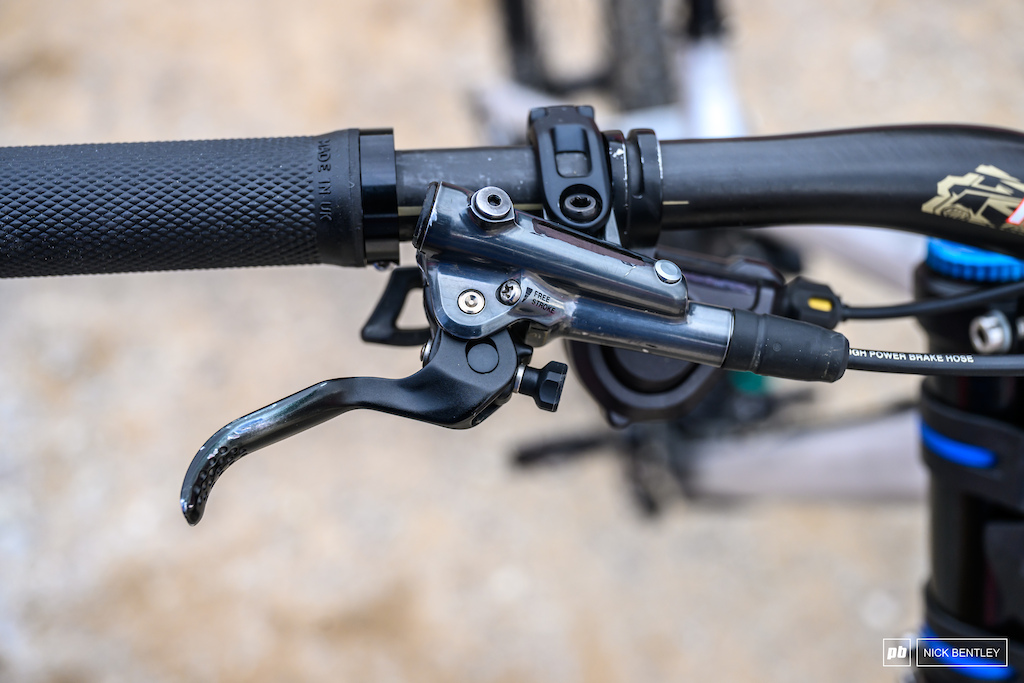 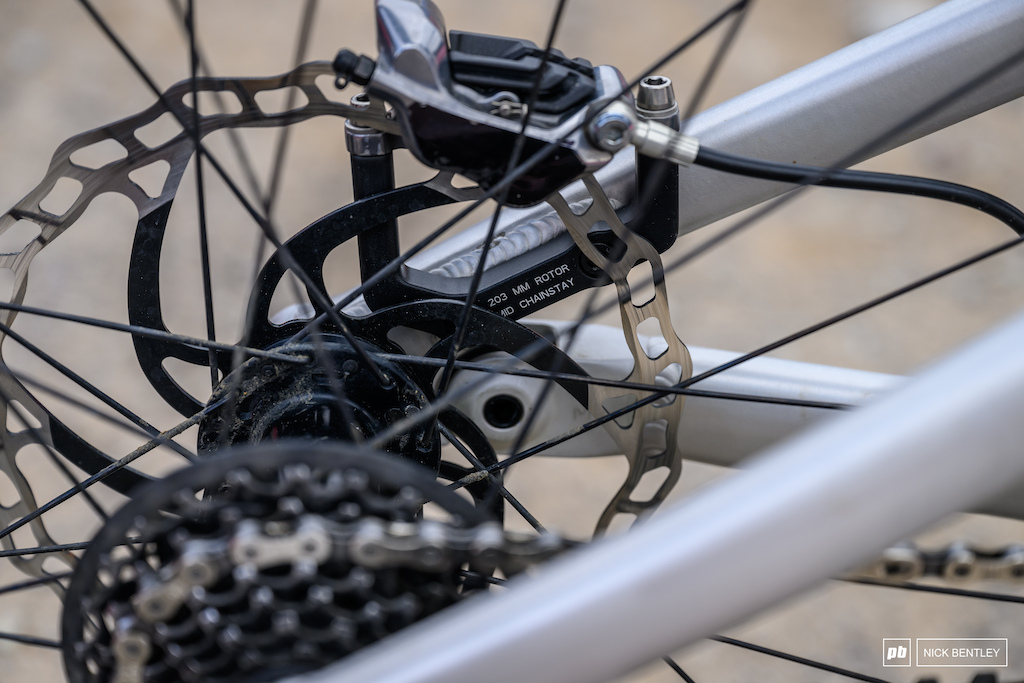 Ok, so brakes are where things get a little different rotor wise. There is one Shimano 203mm and one Galfer 203mm. When the Shimano one wears out, it will be changed to a Galfer 203mm. If it isn't broken don't fix it right? The brakes themselves are a set of Shimano 4 pot XTRs. Inside the XTR brakes, you will find a set of Galfer advanced pads in both the front and rear. 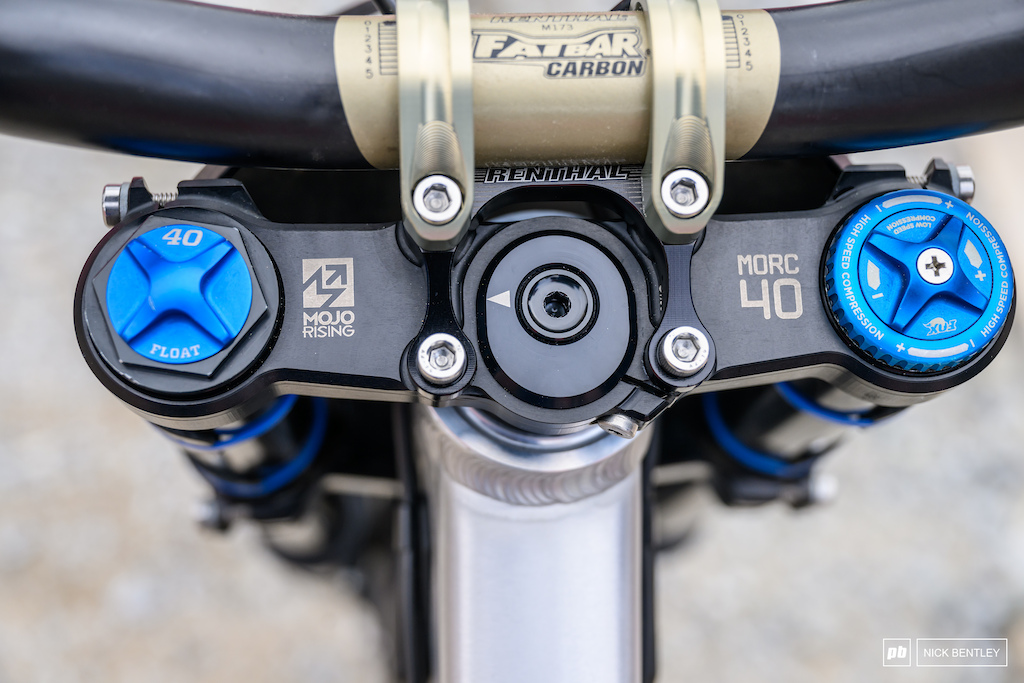 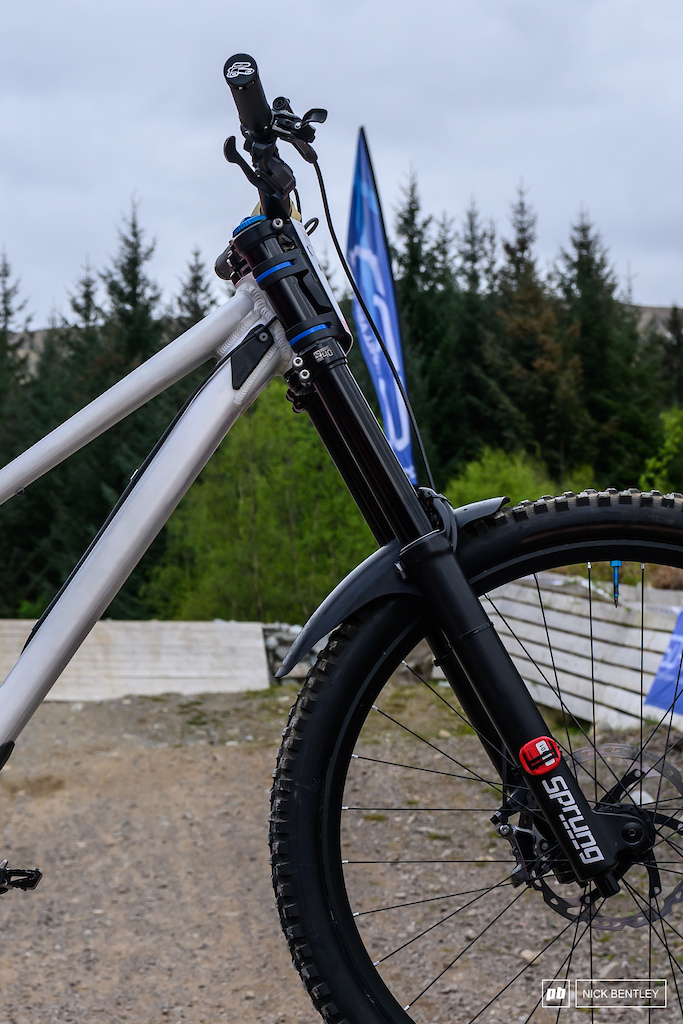 This is no ordinary Fox 40. This is a totally custom fork from Jake Ireland at Sprung Suspension in the UK. It has a custom air spring with some chassis tinkering and damper tuning by Sprung Suspension. It is running 203mm travel and has some Mojo crowns to shorten the offset. Settings wise the fork has 67psi of air in it, with the low-speed rebound set to 14 clicks. Low-speed compression 20 clicks. High-speed compression fully open (all clicks from fully closed) 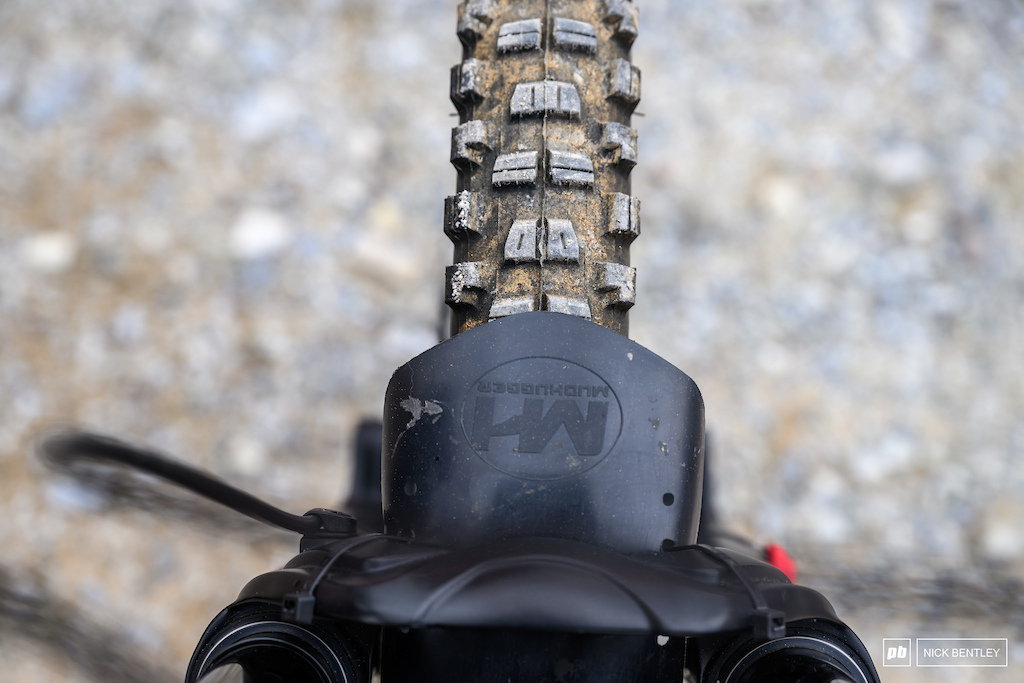 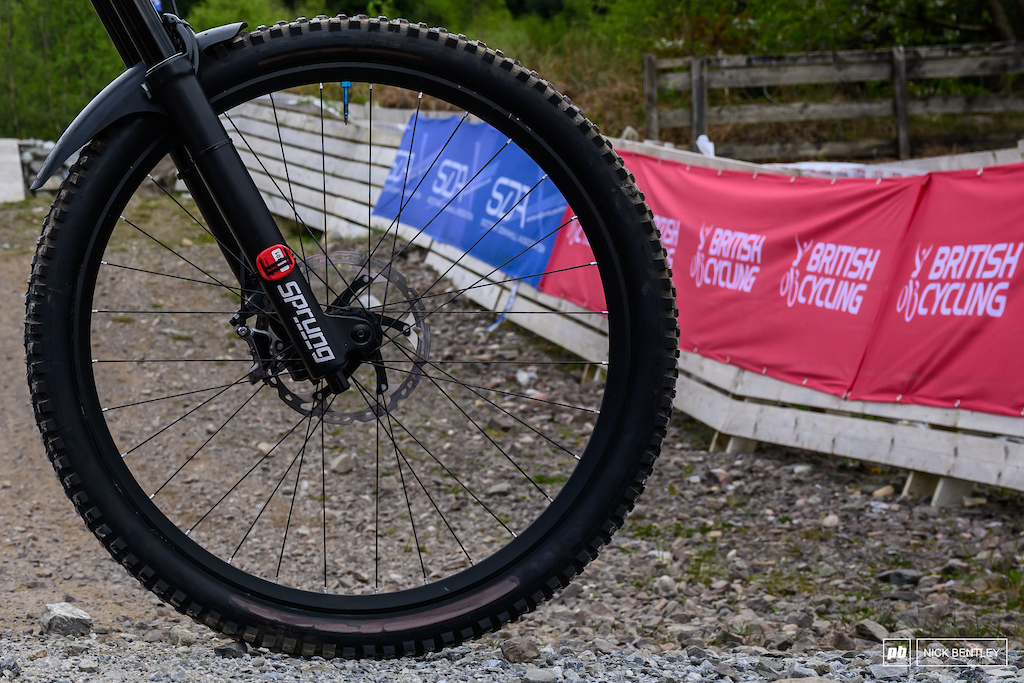 With the current parts shortages we'll probably be seeing more obscured logos than ever this season. 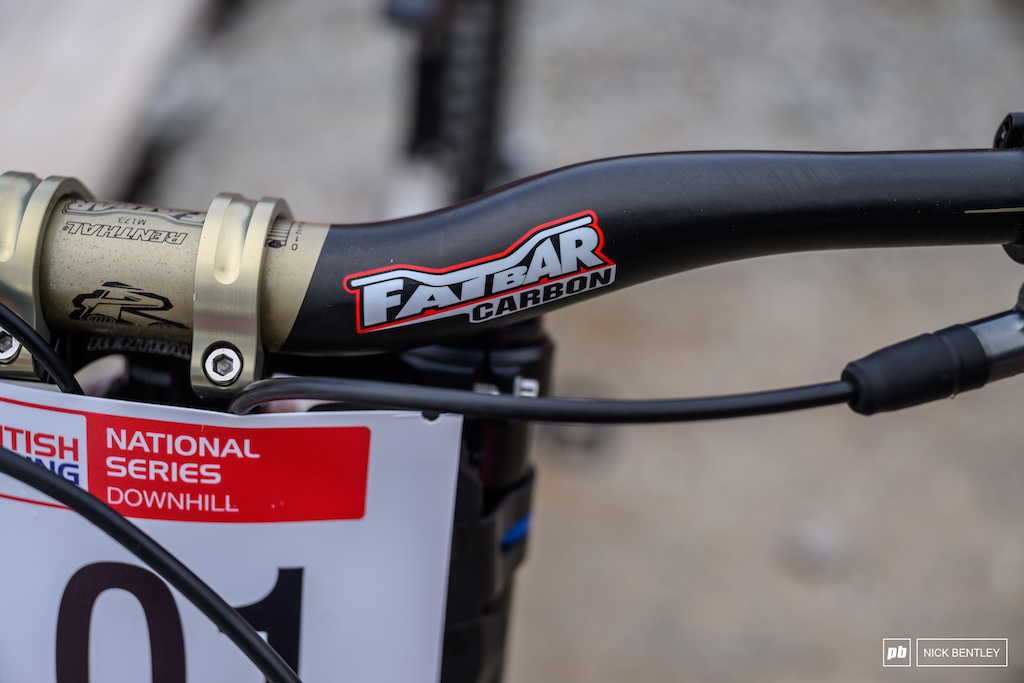 The cockpit of KJ's RAAW DH is a full Renthal set up with a Renthal Fatbar Carbon, 31.8 diameter, running 765mm wide with grips mounted to the forks with a Renthal Direct mount stem which is 45mm long with no rise. Under the stem, there are 10mm spacers fitted. All finished off with Renthal's Classic Traction Lock On Ultra Tacky grips

Sshredder (May 14, 2022 at 7:23)
Nice clean lines with out internal cable routing . Large main pivot , aluminum frame. Much to like about this bike .

initforthedonuts (May 14, 2022 at 15:46)
@Hamburgi
Oh my god, better cancel my Madonna order. What kind of savage makes a bike these days without proprietary through-headset cable routing?

znarf (May 14, 2022 at 11:03)
No problems with the Trunnion mount on my Madonna over four all year seasons. It’s done right on this specific bike.

Funny that the DH bike is hardly heavier than my Madonna

Love it though and am not bothered by its heft, but delighted time and again by its reliability.

dontneedany (May 14, 2022 at 15:56)
So many details, so many numbers. But the one I would really care about is the offset of the very custom fork. I did a lot of research regarding this issue and I would be really interested, what "to shorten the offset" means. Is it really the thing, that the shorter is the better? And what would be "better" (regarding going very fast down the hill)? What about 0mm? Atm I never ever had a comparison between one and exactly the same fork just differing in the offset.

dontneedany (May 15, 2022 at 10:38)
OK, thanks. Interesting what those guys are able to adjust... But I suppose that they are going mostly flat and don't have any DH parts, what makes a difference I think.
But regarding my question, @dan-roberts can you say, how short the offset of her fork is now?

Same steering mechanics apply to moto2. They do downhill braking into corners too
www.singletracks.com/mtb-gear/fork-offset-basics-and-what-it-means-for-you

curbhuck (May 14, 2022 at 7:29)
Perfect privateer bike, if the Madonna is any indication this bike will be burly and durable!

Bob-Agg (May 14, 2022 at 9:30)
A question about "from fully closed" dampers. Is that until it stops turning or until the last click as they are rarely the same?

gabriel-mission9 (May 14, 2022 at 15:46)
Thats a good question, as it is unclear whether to count the first click as 1 or 0. But also... One click honestly doesnt matter that much. If you are running your suspension within 1 click of the settings of some pro rider, you are probably running your suspension harder compression and faster rebound than is ideal for an average rider. If you are just using the pro settings as a base to start your own adjustments from, it doesnt really matter if you start 1 click up or down from the settings they have chosen for some specific track. Once you have made your adjustments, the original settings are irrelevant. On top of that, if the suspension has been custom tuned internally, the external settings wont match any more anyway. So none of it really matters

Bob-Agg (May 14, 2022 at 18:10)
@gabriel-mission9: I don't really care about the pros settings, especially one who's had a custom tune. I'm asking because I'd like to get the base settings right from the manufacturers recommendations. One click isn't much but if I try setting one click either way it could be effectively at 0 or two clicks out from base.

gabriel-mission9 (May 15, 2022 at 3:13)
@Bob-Agg: If you are unsure whether to count the first click as 0 or 1, you will only ever be a maximum of 1 click out from the recommended setting. Again, 1 click doesn't matter that much. Recommended settings are just a recommendation. They are in no way an accurate or bespoke setup for you, just a ballpark figure for a good place to start.

TEAM-ROBOT (May 15, 2022 at 13:51)
@Bob-Agg: I twist the knob until it starts to get hard to turn, then I keep I keep twisting it until I feel the mechanism inside the shock give way and oil starts leaking out. Then I know I got to "fully closed."

plustiresaintdead (May 16, 2022 at 11:15)
@TEAM-ROBOT: I find an impact driver to be the best for setting my suspension quickly.

TannerValhouli (May 14, 2022 at 9:20)
No listed tire sponsor to clash with maxxis, still sharpies out the logos… why bother?

Verg (May 14, 2022 at 9:41)
Maybe it’s a pay to play thing. No reason to give a company marketing they don’t pay for. It definitely happens in other sports that way.

Why advertise for free??

bmbracing (May 14, 2022 at 9:46)
Great combination of rugged toughness and clean, simple, fast-looking lines. And external cable routing! - could a RAAW be my next bike? Now if they only did it in 27.5" and with a non-trunnion shock...

MrShreddypants (May 15, 2022 at 16:31)
@ethpar: Trunnion shocks are known to be less structurally sound. The have an overall shorter length and can usually fit a wider variety of places on the frame so manufacturers like them. I asked Brent Foes about it and he said that trunnion shocks are good for frames but bad for shocks. I personally don't have any experience on them but that's what I've heard.

posner (May 15, 2022 at 21:31)
@ethpar: Trunnion shocks are too rigid to allow flex from frame misalignment issues or side loading. www.pinkbike.com/news/pinkbike-poll-has-your-shock-ever-failed.html

Losvar (May 20, 2022 at 1:48)
@posner: Pretty much this, and most frames have shit alignment.
I don't know any other industry where anyone would accept the lazy QC on something as important as alignment, and especially at the price points in the bike world.
It's a travesty to be honest, one of the main reasons I bought a Last frame, I've had it for 5 years now, and still haven't worn out a single pivot bearing, even with many bike park trips and a lot of really rough riding.
Alignment matters.

bmbracing (May 21, 2022 at 15:39)
@ethpar: Yeah no problem. The other 3 folks have pretty much answered it. I keep my stuff for years, and can't afford to destroy a shock body/mounting (and possibly excess wear on the shaft/internals) - much rather replace standard eyelet hardware, and to be able to easily swap out the shock for other standard models if required.

And on a related note, why don't more standard shocks use spherical bearings instead of bushings at they eyelets? Think I've only seen them on Curnutt (Foes) and EXT?

el-harry (May 15, 2022 at 4:50)
I´m guessing this has been edited since now is a GX DH cassette listed. Has anybody some feedback abouth how good this combo works since the SRAM DH cassettes are based on 11-speed cog spacing while shimano should be 10-speed?

DavidGuerra (May 14, 2022 at 13:54)
That robust-looking main pivot earns this bike some equally big points.

Pung-young (May 17, 2022 at 4:52)
Kinda surprising given her Hope Technology connection that there is no Hope gear on the team bikes...

ghbiker (May 14, 2022 at 7:41) (Below Threshold)
www.pinkbike.com/news/muc-offs-clever-new-product-allows-you-to-hide-an-apple-airtag-in-your-wheel.html
They go in the tire now. hah