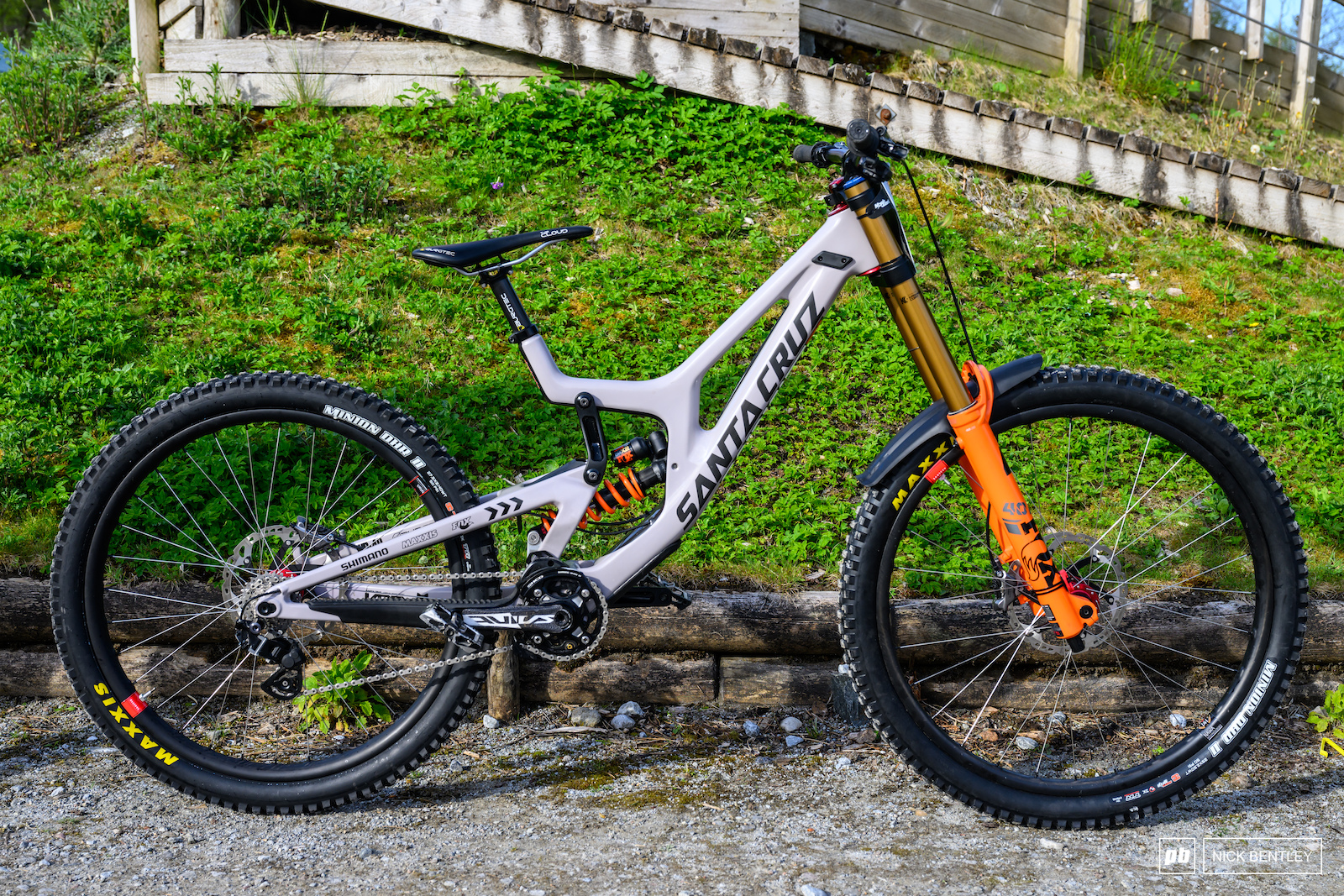 BIKE CHECK
Laurie Greenland's
Santa Cruz V10
Photography and words by Nick Bentley
I stopped by at the Santa Cruz Syndicate pits to check in with Laurie Greenland and get the lowdown on his new Santa Cruz V10. Unless you have been living under a rock recently you will know it's Laurie's first season with the Santa Cruz Syndicate and after such a long time riding his previous bike, it was interesting to get the details of how he's got his V10 dialled in so fast.

Laurie was on it all weekend with a stacked field at the Fort William round of the UK National Downhill Series. It was a really tough field of riders to get a result in but with the Bristolian taking home 3rd it's going to be interesting to see if he can carry that pace over to the World Cup in the same venue this week. Anyway enjoy this stunning Santa Cruz V10 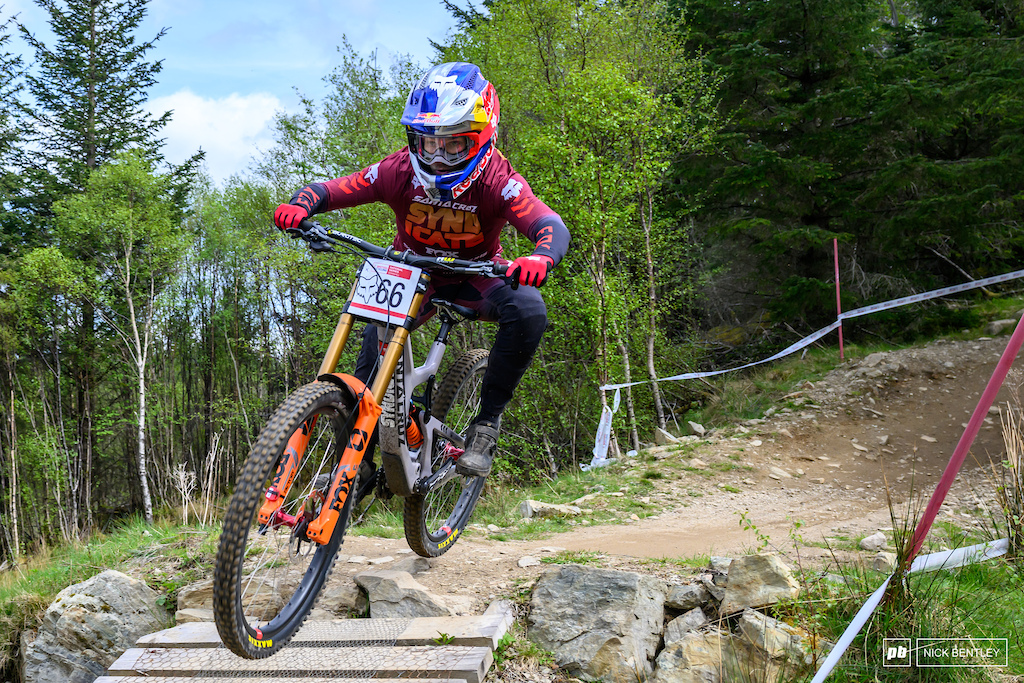 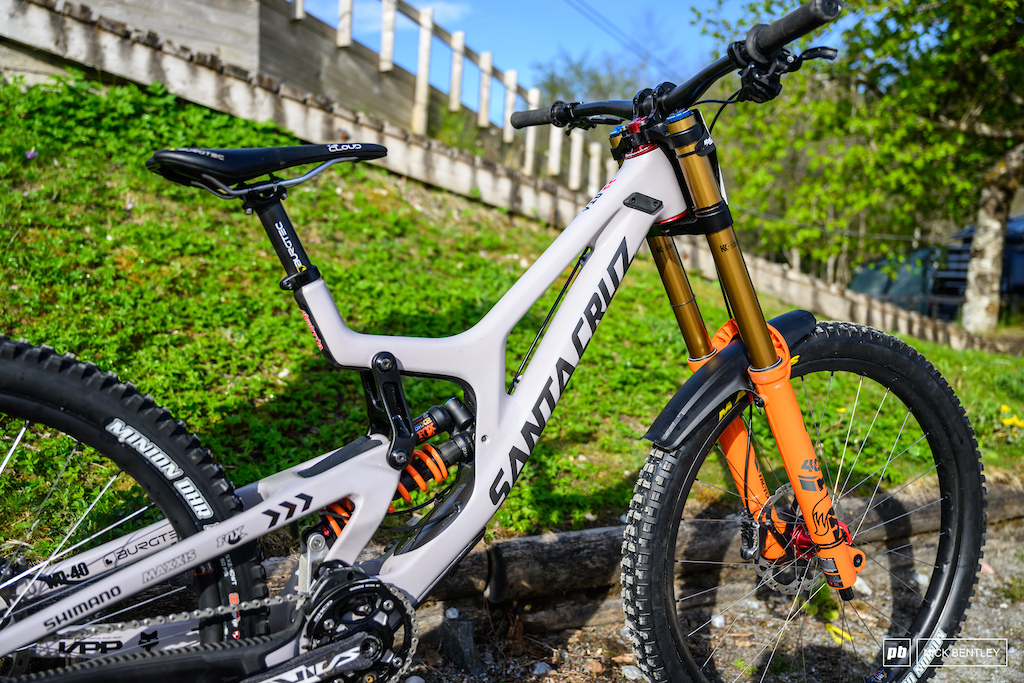 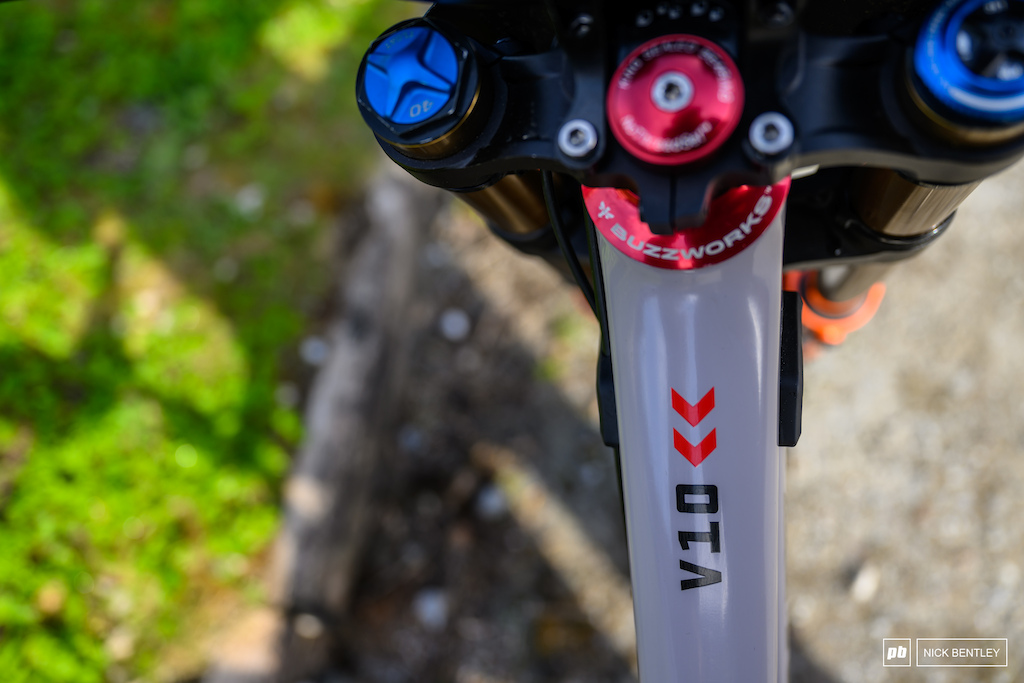 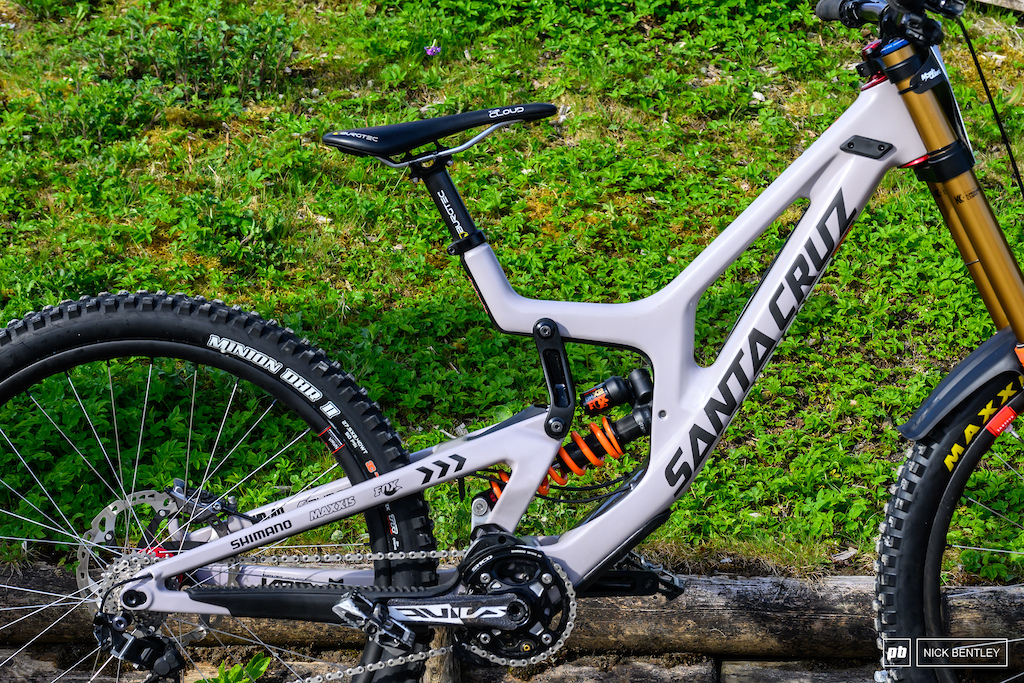 The Santa Cruz V10 Laurie rides is a medium frame, however, there is a Chris King Buzzworks headset fitted giving an extra 8mm of reach on top of the 435mm of reach, the standard bike comes with. 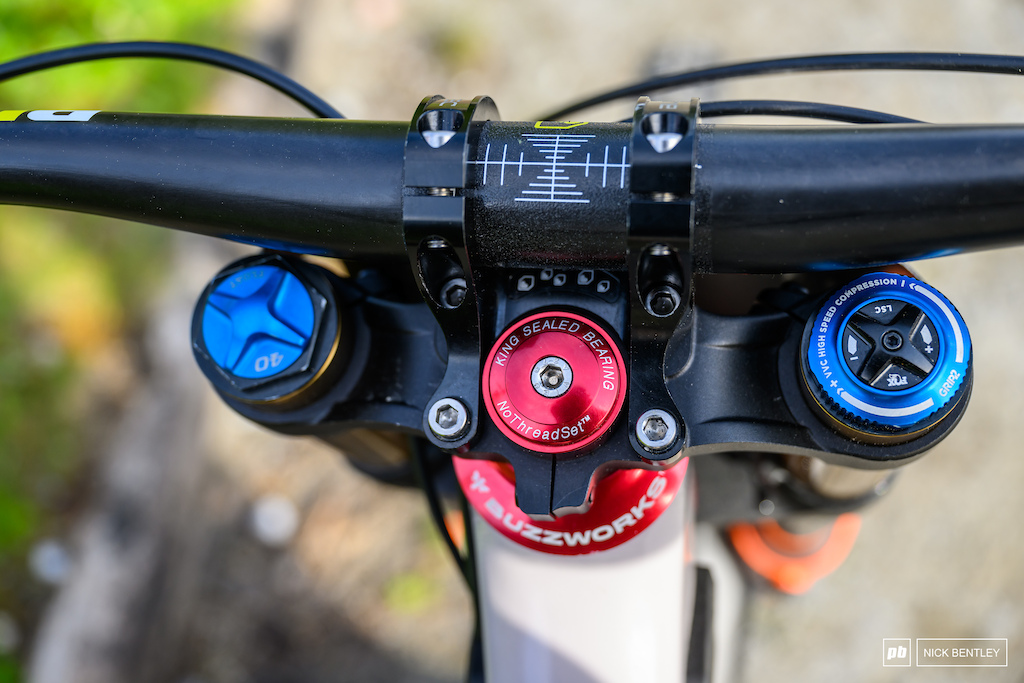 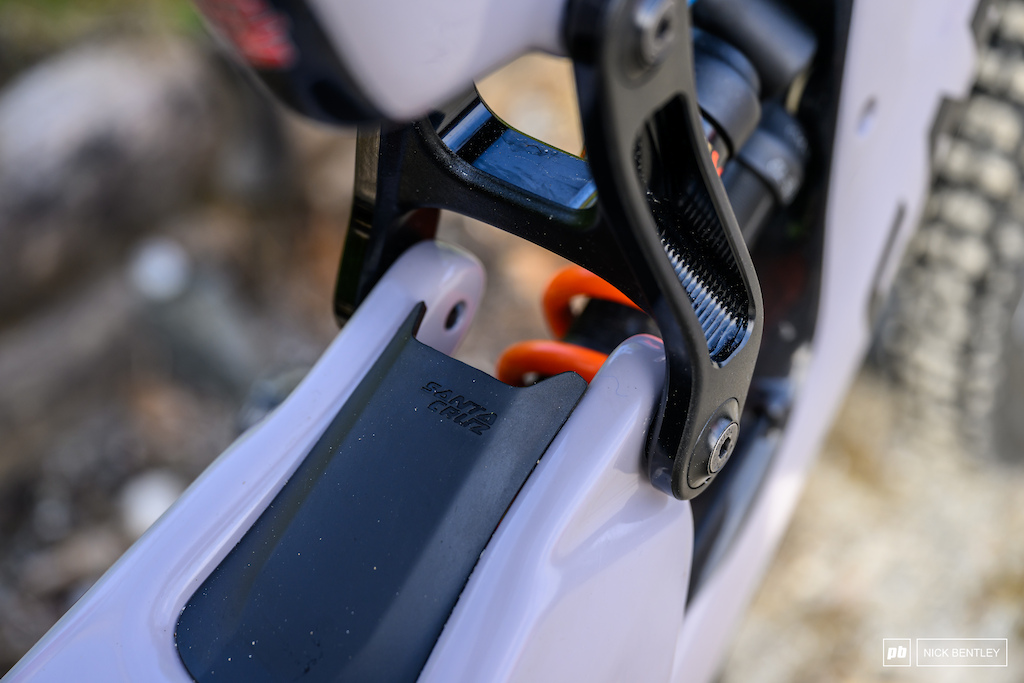 The rear mudguard is a nice detail and keeps the Fox DHX2 clean, not that mud was an issue at Fort William for a change. 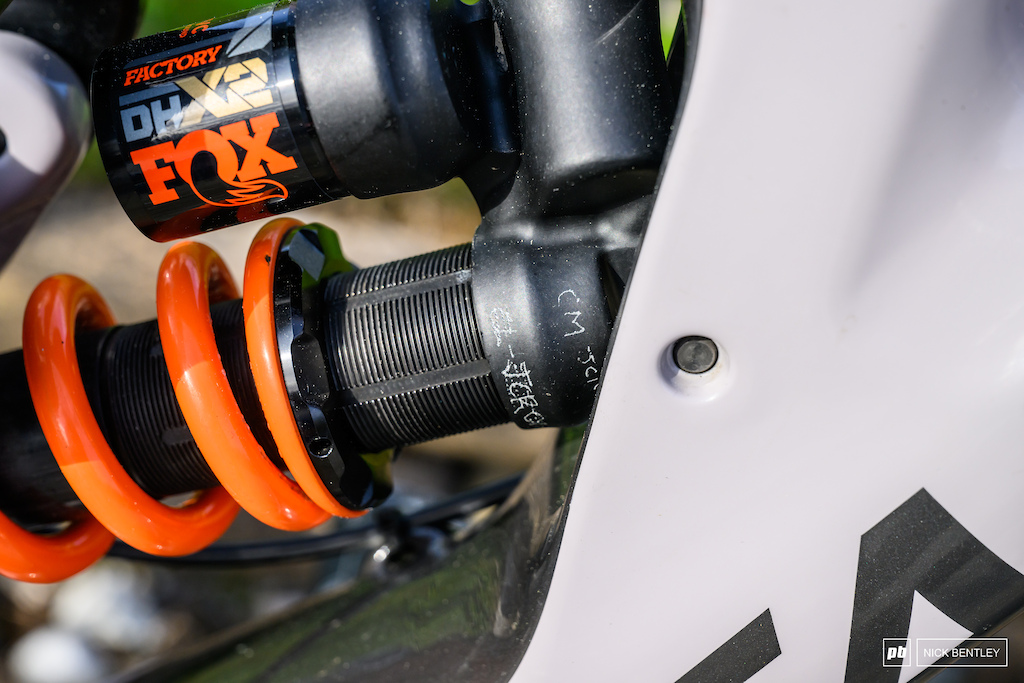 Low-speed compression changes between 8-12 clicks dependent on the track, high speed rebound is running 7 clicks and the low speed rebound is set at 8 (all clicks from fully closed). Laurie likes his suspension to be on the faster side and running as supple as he can get it. 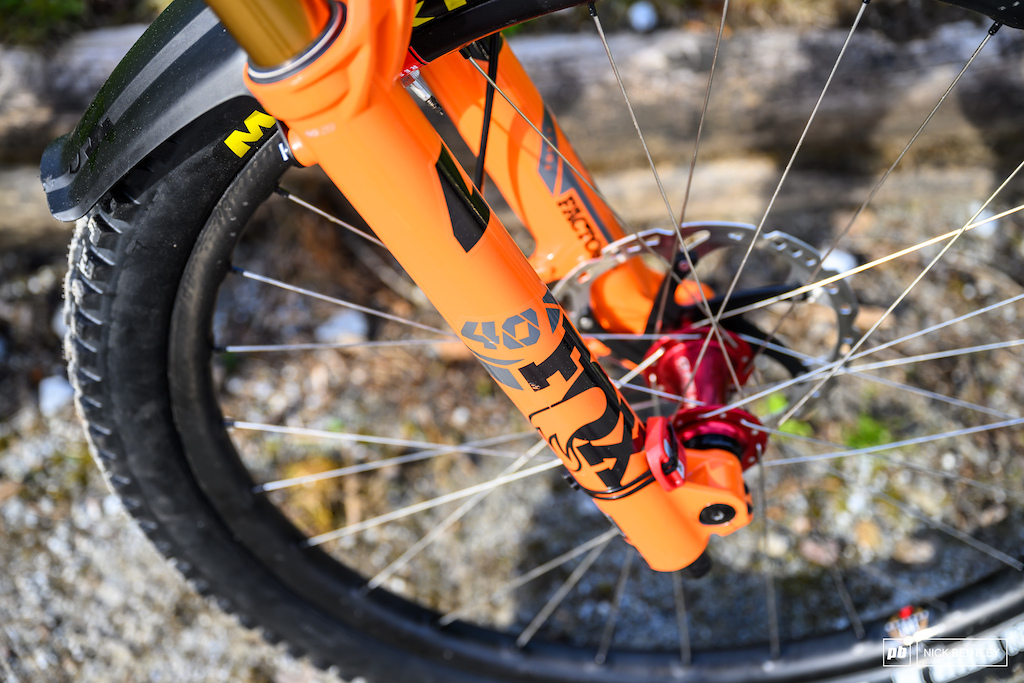 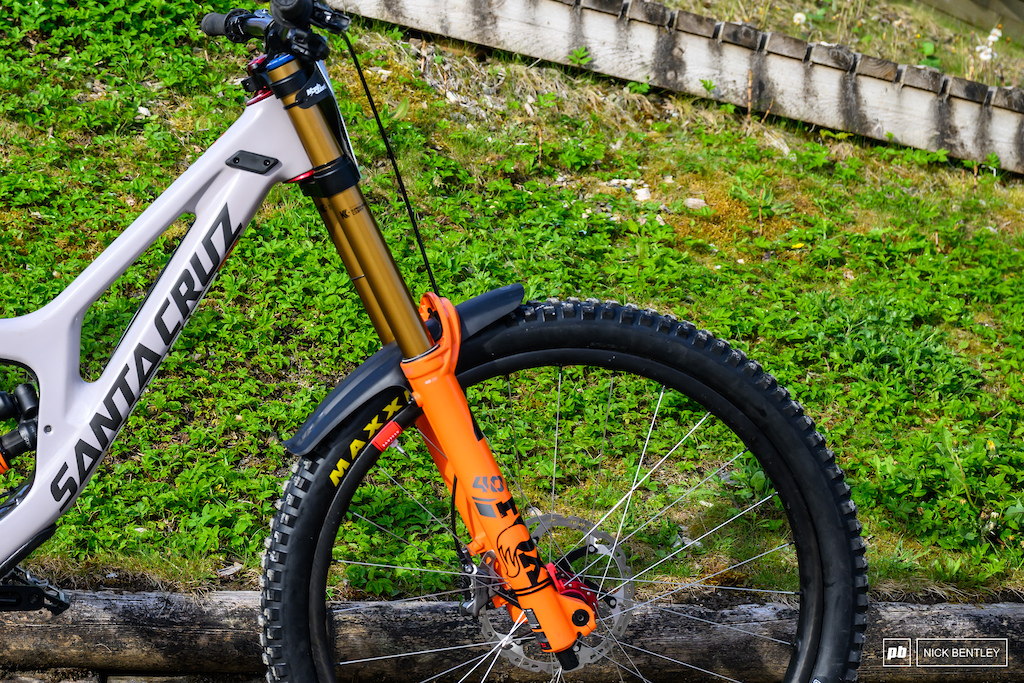 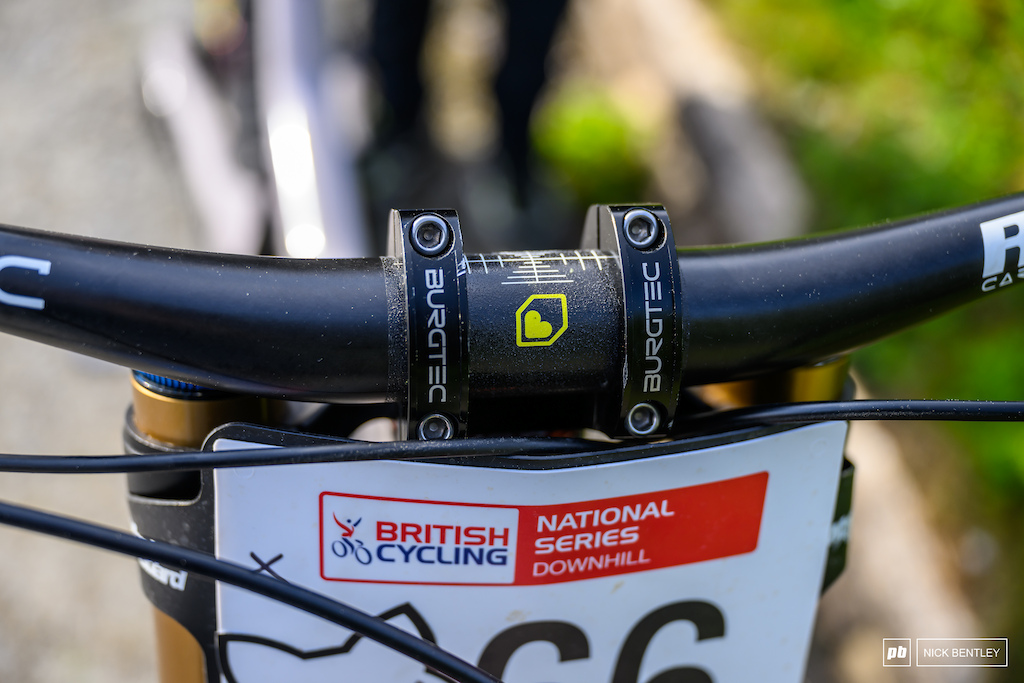 As we are at the front of Laurie's bike let's talk handlebars. There is a carbon set of Burgtec's Ride Wide DH bars fitted with 20mm of rise 9 degree Backsweep and 4 degree Upsweep. These are cut down to 780mm wide. They are held to the top crown of the Fox 40s by a Burgtec Direct mount Mk3 stem which is 45mm long. Also, it's interesting to see that Laurie runs his brake leavers close to horizontal. 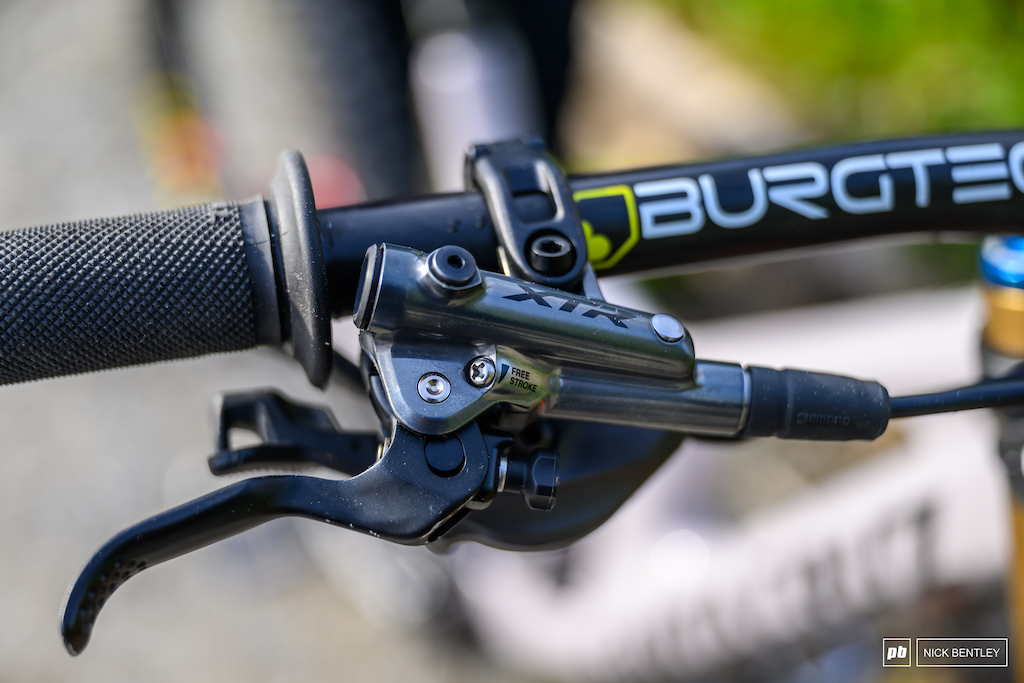 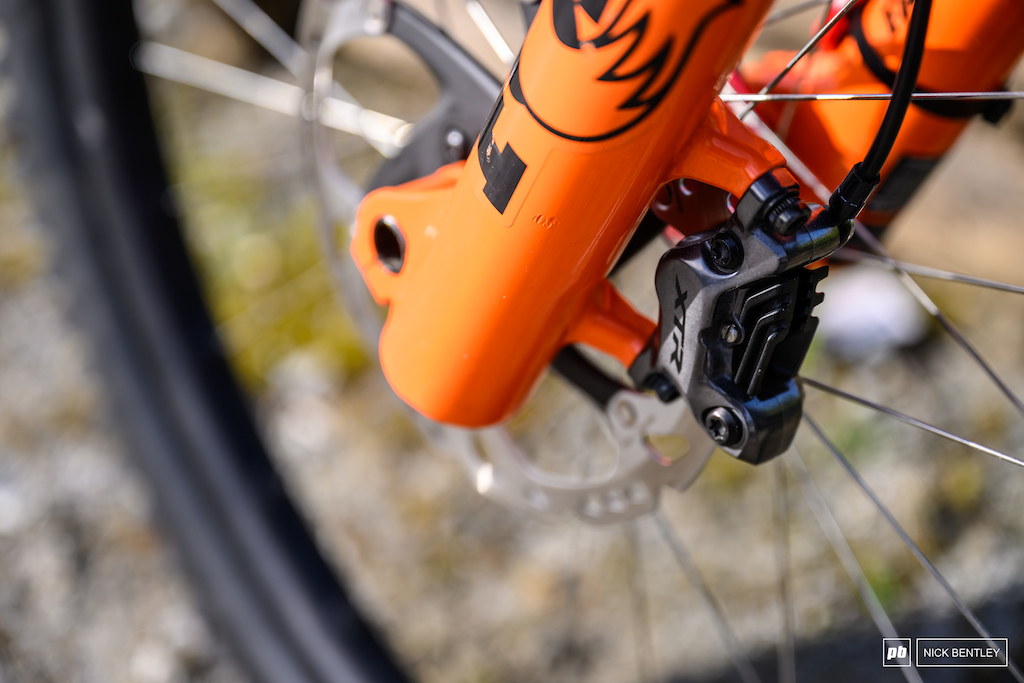 The brakes on Laurie's V10 come from Shimano and they are a set of the popular XTR 4 pot brake accompanied by a set of finned Shimano brake pads. 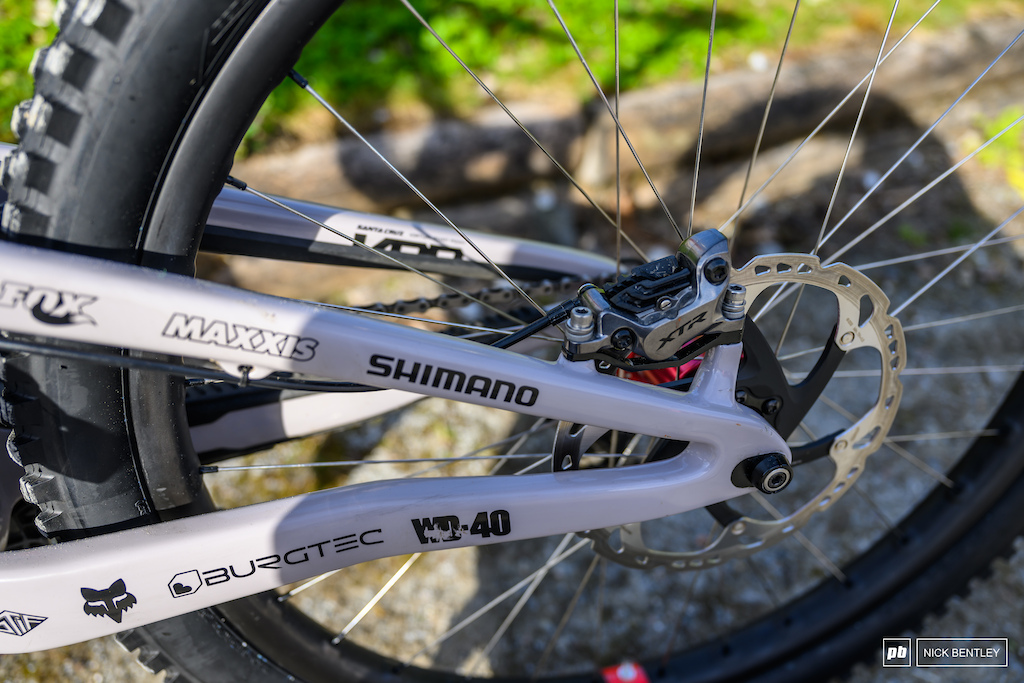 Shimano once again provides the rotors, these are their floating Ice tech versions that are 203mm in diameter both front and rear. 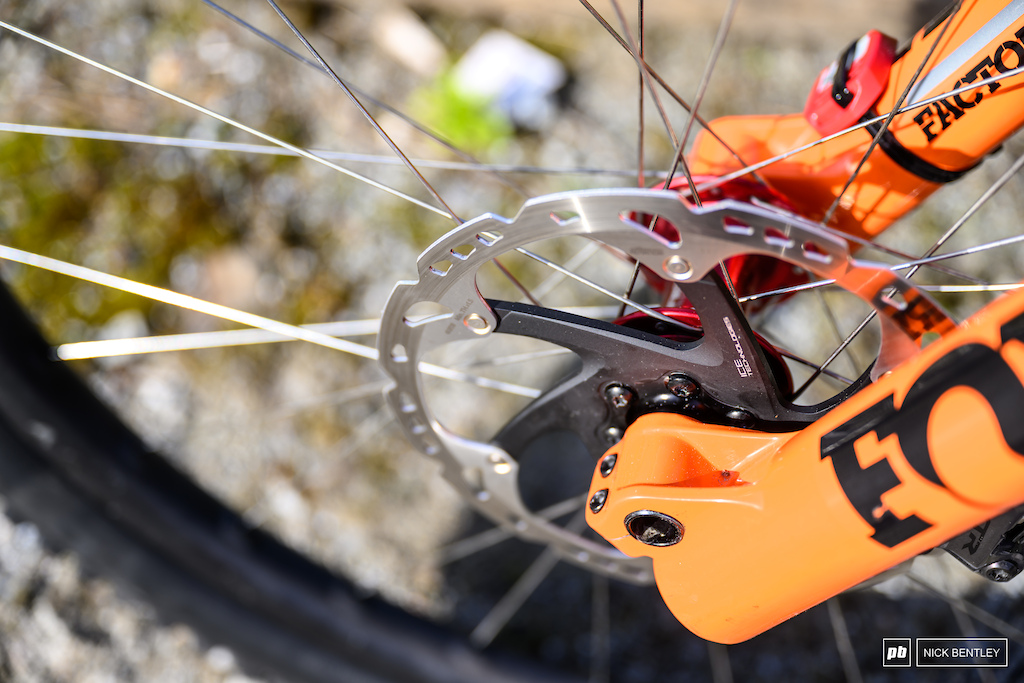 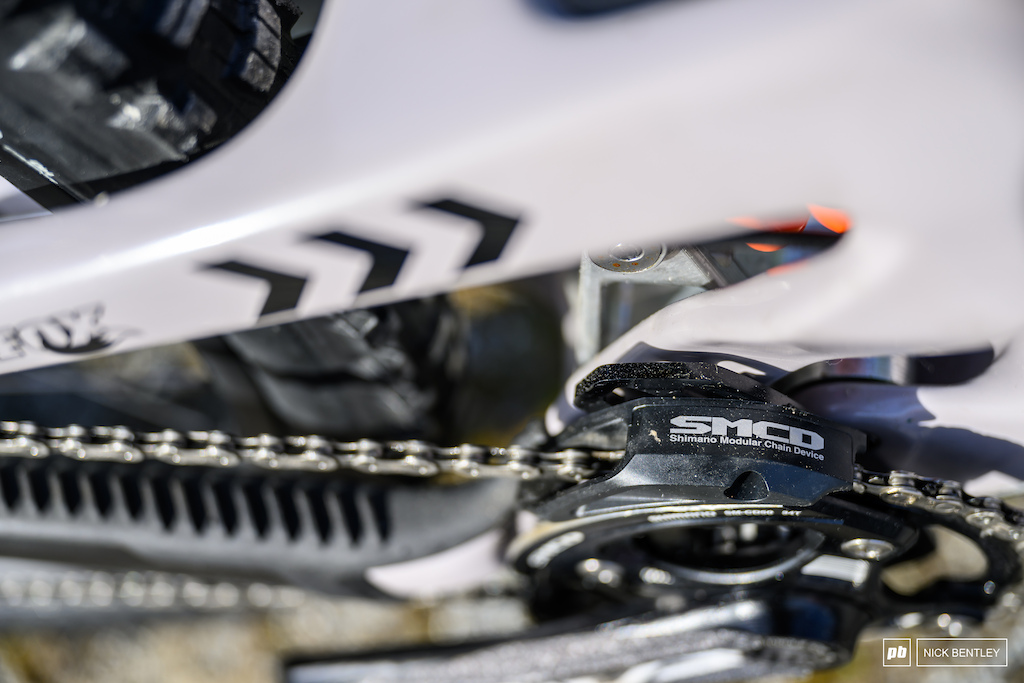 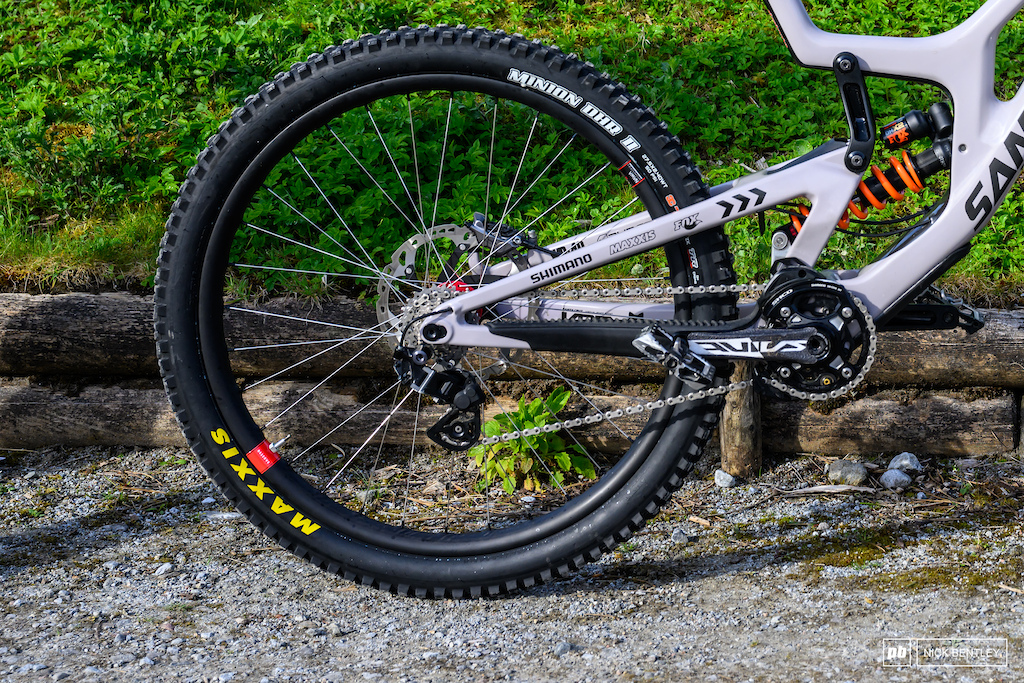 When it comes to drivetrain it's a full set of Shimano Saint for Laurie with an Ultegra road cassette combined with a Shimano 34T chainring. The chain is kept in place by a Shimano modular chain device. Pedal wise it will be no surprise to anyone to see the Crank Brothers DH mallet pedals fitted to the cranks on Laurie's bike. 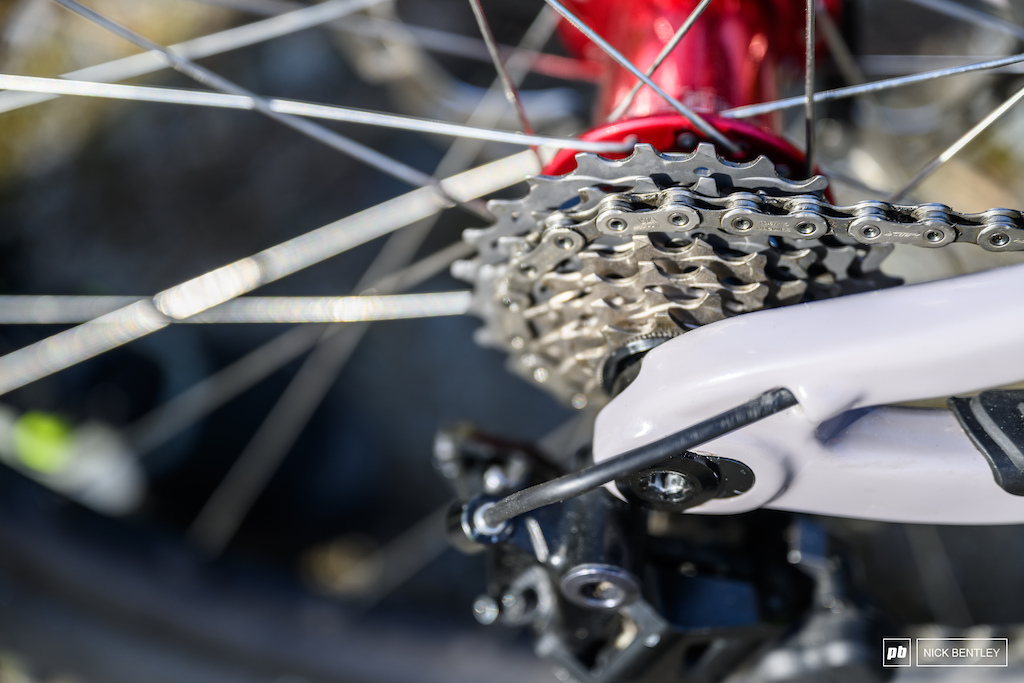 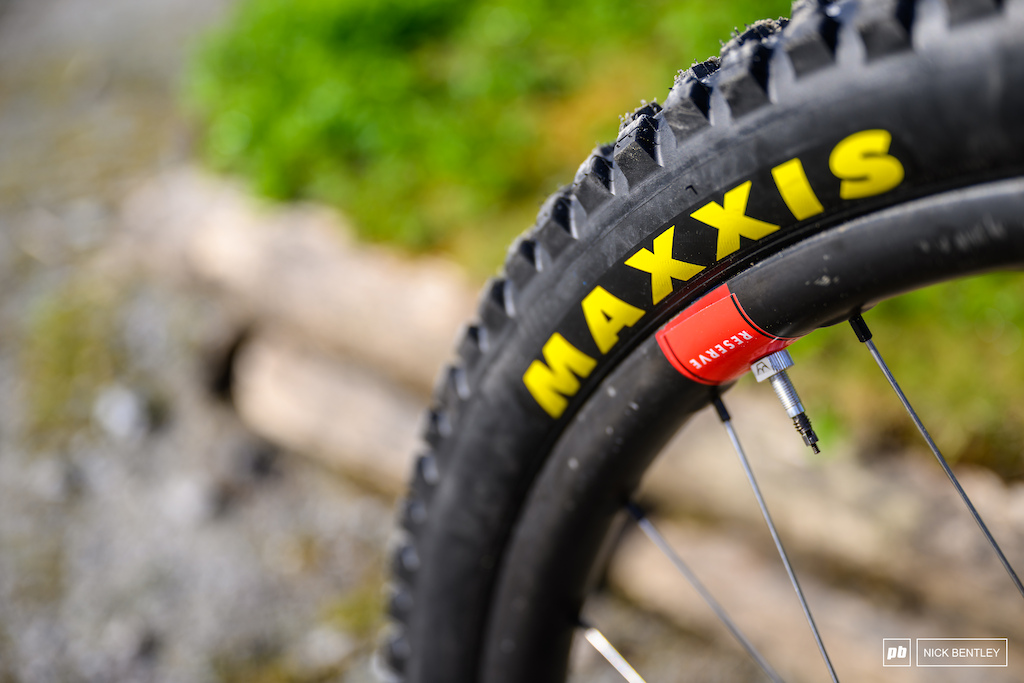 Wheels are a Santa Cruz Reserve Chris King build running Peaty's sealant and tubeless valves. For tires there is a set of Maxxis Minion DHR II's fitted with a 29"x2.5" to the front running 22psi. In the back, there is a 27.5"x2.4" fitted with 25psi of air in it and no tire inserts. 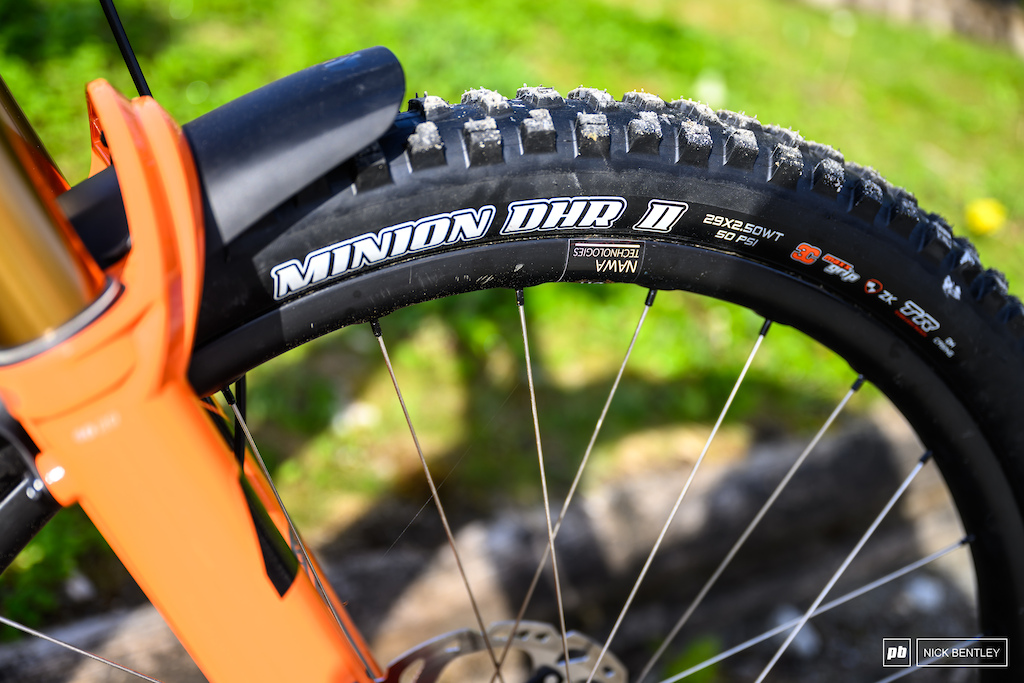 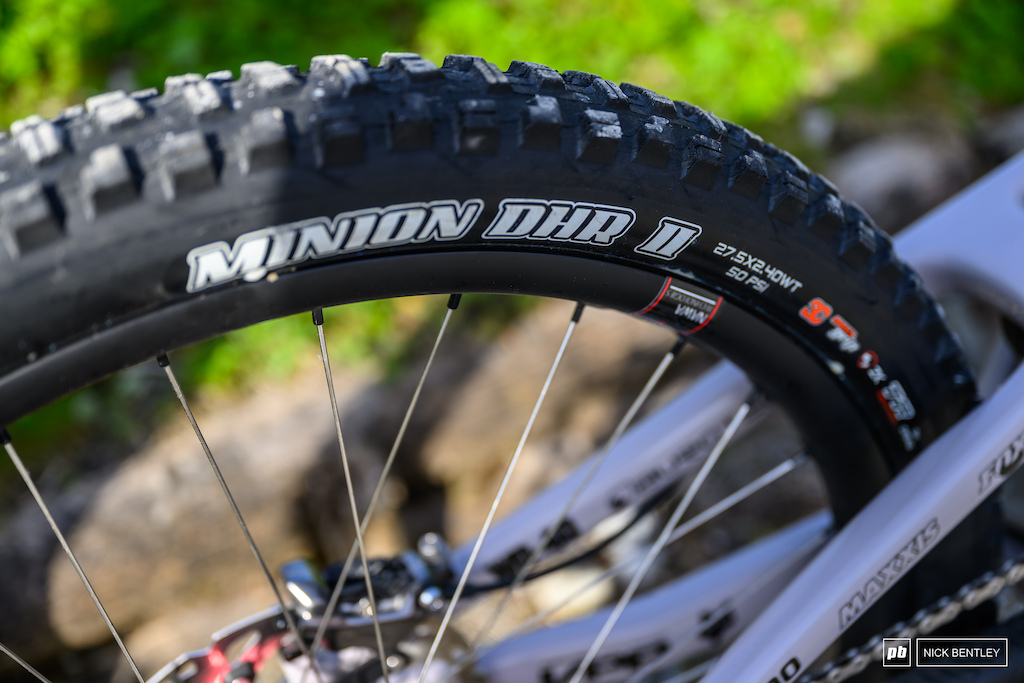 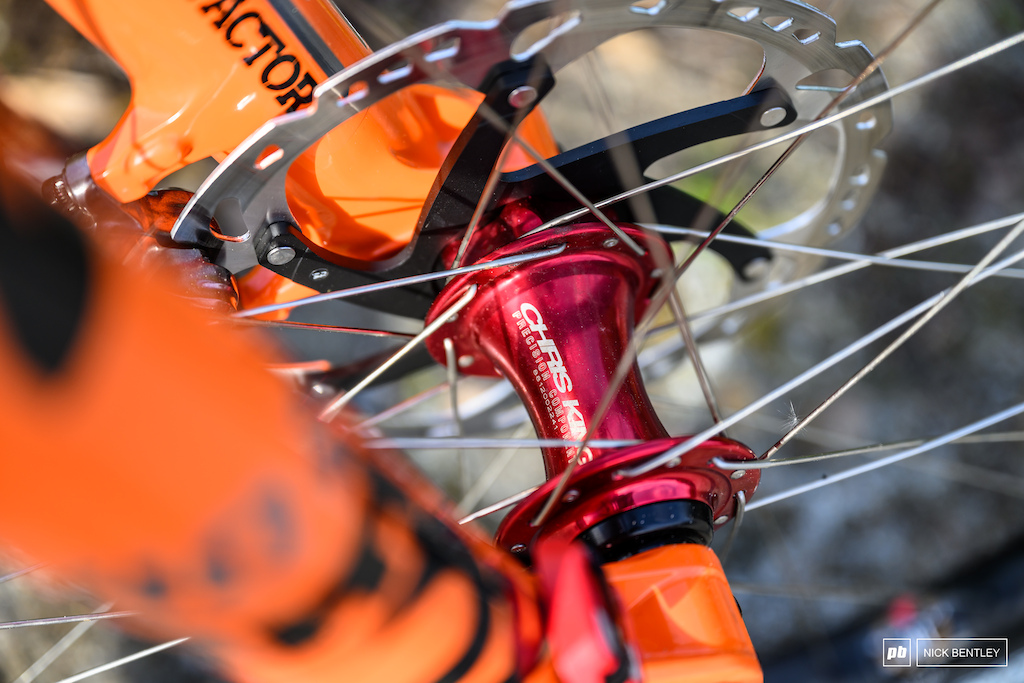 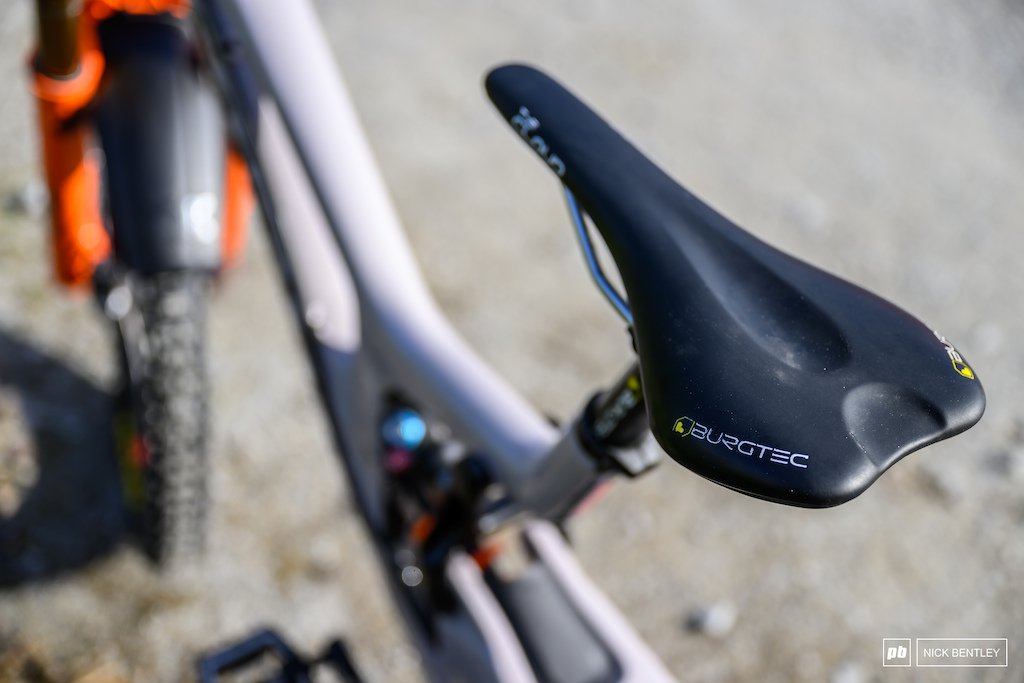 Lastly, Burgtec takes care of the saddle and seat post with their The Cloud saddle and Xpress seat post.

Also, this is Pinkbike's best bike check in ages.

initforthedonuts (May 16, 2022 at 7:10)
Congrats to the Syndicate for acquiring all of the remaining stock of 6 bolt CK hubs…? See? We do still want these over center lock.

slickrides (May 16, 2022 at 9:29) (Below Threshold)
what is better about 6 bolt? i am sorta preferring centerlock at this point

Notmeatall (May 16, 2022 at 9:43)
@slickrides: tools. You kind of carry the right tool to quickly snug up the 6 bolt pattern. Centerlock needs the cassete tool or the bottom bracket tool, that no multitool have.

thenotoriousmic (May 16, 2022 at 10:28)
@slickrides: it’s just a poor design. Like mentioned there isn’t a centre lock tool on your multi tool or in any random persons garage, local rural hardware store and the tool required is massive so you won’t have one in your pack and after all that they’re noisy when braking in rough ground and require something like 50 nm of torque which never feels nice with those sketchy lock on nuts that can slip at any moment and your limited to what rotors and hub you can use and they’re never as cheap as 6 bolt alternatives. Just shimano being shimano and telling us what we want not the other way round. Got to be careful what I say on here incase I’m forced to run a front derailer again or worse service cup and come hubs.

Aburjakowsky (May 16, 2022 at 10:57) (Below Threshold)
Hahah I was driving while reading this article
first thing I noticed when I saw SC syndicate I went straight to the kings... I see 6 bolts suddenly you hear every *%(&*%!#! word come out

initforthedonuts (May 16, 2022 at 11:28)
@slickrides:
Just one more “standard” limiting compatibility. Already have to choose a driver standard when speccing hubs, don’t want to have to choose a brake standard as well. 6 bolt works with everything, nothing wrong with it, and all the tool comments add to the preference.

nskerb (May 16, 2022 at 14:05)
@slickrides: I'm brave enough to publicly agree with you lol.
I kind of get what these people are saying about the multi tool thing but I've never had a center lock or a bolt from a 6 bolt setup ever come loose. Generally they are actually difficult to get off.

charlovelo (May 16, 2022 at 15:17)
@slickrides & @nskerb : To add a bit more explanation about Centerlock over the "no carryable tool" argument, there is the fact that the threaded interface for Centerlock requires the wheel bearing to be pushed inward on the disc side which makes for a less optimal bearing placement than what can be achieved with a 6 bolt hub. This can lead to premature bearing wear in some cases. Also, it does seems counterintuitive that a "better" standard would require to "worsen" another part of the system.

Add to that the fact that manufacturing the splined interface on both the disc and the hub requires more intensive machining than drilling + tapping 6 holes and you end-up with a both a hub and a disc that likely costs more to produce. Considering the fact that the disc is a wear item, I feel like I would rather go with a simpler disc design to minimize overall maintenance costs than the other way around.

But then some might prefer the ease of installation of a Centerlock interface, which is fine. I just feel like pushing only for Centerlock isn't necessarely the best avenue for all customers and I would rather brands don't simply discard a simpler design which just works well.

lehott (May 16, 2022 at 15:59)
Is there a negligible difference between 6bolt rotors, centre lock rotors and floating rotors? There 5K bikes that got a basic 6bolt rotor system, so obviously it's negligible to the rider?

nskerb (May 16, 2022 at 16:33)
@charlovelo: that all makes sense. None of those reasons really apply to me, but I totally see why they would apply to and matter to people other than me. If you ride a lot then having something that tends to wear out wheel bearings faster than normal would be a huge bitch.

I don’t really push the center lock should take over but if I had to pick one to exist over another I think I’d pick center lock for selfish reasons.

The realist in me prevailed and I bought 6bolt hope hubs last week because I don’t want to deal with the headache of finding center lock rotors if I bend one, so I guess I’m just totally wet noodling on this opinion.

SleepingAwake (May 16, 2022 at 6:05)
What's the point of giving clicks on a suspension with a custom tune? Not that it would be useful for any mortal being otherwise, but still...

CustardCountry (May 16, 2022 at 6:17)
B3caus3 people on here keep asking for it. They get upset when it’s not confirmed if the clicks are from fully opened or closed, let alone not saying how many at all

AyJayDoubleyou (May 16, 2022 at 6:29) (Below Threshold)
@CustardCountry: I dont even know which is fully open and fully closed. Fuly wound clockwise would imply that something is all thhe way in, therefore closing a gap or valve.
I still hate when people say "add 2 clicks of rebound" when they mean add rebound *damping*. Yes it can be an abbreviation but it has the opposite meaning if you take it literally.

sooner518 (May 16, 2022 at 6:50)
@AyJayDoubleyou: fully closed means you have turned the dial clockwise as far as it will go. your assumption is correct, in that you're closing a small valve inside the shock.

i agree that the language around this stuff is quite imprecise but at this point, i think i have a solid grasp on what people mean. typically "adding a click of rebound or compression" does mean what youve said. theyre adding rebound damping, thereby making the rebound slower.

nickfranko (May 16, 2022 at 9:02)
That is true. I guess you could call Fox, ask for his tune, set the clicks identically, then feel absolutely no different on your local trails because you're so slow. Lol

Mac1987 (May 16, 2022 at 12:16)
Because Saints give Hope? Or because Hope are the Saints of MTB components? Or because you have to have the riches of a Catholic Saint to afford Hope gear? And like you Hope, I'm gonna end this horrible attempt at humor for the love of Saints.

Joebohobo (May 17, 2022 at 12:12)
@havroski: yeah understood, just trying to correct the person who seems to thinks it couldn’t be an ultegra cassette

Look at the cogs, the first four are steel, the next 3 are titanium : bike.shimano.com/en-EU/product/component/xtr-m9100/CS-M9100-12.html

That tech & material configuration is only used on new the XTR cassette; not Ultegra, not Dura Ace.

So either it's a cut down XTR cassette or the new Saint & considering he's got a new Saint derailleur on there, that's where I'd put my money.

And shoutout to @havroski , for calling that out.

jaame (May 16, 2022 at 11:06)
I’ve got a bet with my son. If Hart beats Green Land in the overall, he owes me a fiver. If Green Land beats Hart, I owe him a fiver. Either way, it’s all good. I’m happy that the young lad is getting into following the World Cup and having a favourite rider even at a young age.

breenmachine (May 16, 2022 at 8:00)
That spring rate is exactly what SantaCruz recommends for a 70kg rider. Not particularly stiff.

Notmeatall (May 16, 2022 at 11:32)
depends on the leverage ratio and progressivity. Looks like he got a custom lower link.

dandunne13 (May 16, 2022 at 8:35)
would be interesting to know what tune shock he is running. A local suspension service centre suggested that the new dhx2 has a very hard spring on the HSC system, said they can feel harsh when adding LSC + HSC, also suggested changing the tune to a BV-3 (I think thats the tune). anyone any experience with this?

justinfoil (May 16, 2022 at 9:36)
Told us no there are no inserts, but not what casing the tires have. Some icon and "ZK" in the usual spot on the hotpatch: something new? Prototype?

thingswelike (May 17, 2022 at 5:56)
I thought Laurie got 2nd at the Fort Bill BDS!
Edit: hmm 2nd Elite, but A junior Jordan Williams did just pip Laurie on time

tavaenga (May 16, 2022 at 14:03)
Syndicate is sponsored by Fox Factory for suspension and Fox Racing for clothing. Logos look correct.

MattP76 (May 16, 2022 at 10:07)
Why not go the full hog and stick a 20er on the back. Since the back wheen has all of a sudden become an issue. In fact I wonder if BMX racers are going to start using a Polo as a wheel soon, kinda fits with the current fad.